The Deputy cup-bearer of the Grand Duchy of Lithuania Michael Alexander Ronikier funded the building of the Church of Žemaičių Naumiestis in 1781 in whose honour the Church was given the title of his patron Saint Archangel Michael. In 1831, on the initiative of the then priest of the Church Baltramiejus Ivanauskas, the Church was renovated; some part of the churchyard was fenced with a stonework wall. At the beginning of the 20th century, when Antanas Vitartas was its dean, the Church underwent another big reconstruction: its walls were raised, and the altars and the roof were renewed. During the reconstruction the baroque Church acquired features of classicism and history; however, it retained the structure of a cruciform plan with a compact inside space, which is extended by the presbytery of the same height and width and two chapels. The brick foundation of the Church has a basement; the walls of the Church are built of logs and boarded with planks. The gambrel roof is metal of a cruciform construction with a turret over the crossing. During the reconstruction carried out at the beginning of the 20th century, the octagonal turret, instead of a baroque dome, acquired a tapering neo-gothic form. The turret ends in a decorative ornamented cross. Crosses, only older ones, made by blacksmiths, are also raised over four apices of the cruciform roof. The modest main façade is adorned with the door boarded in a diamond-shaped design and the sculpture of the Crucifix in a profiled baguette frames. It is thought that after the reconstruction carried out at the beginning of the 20th century the windows of the Church acquired the configuration of a twin arch characteristic of architecture of historicism. The three-wall apse is adorned by a small chapel with the Crucifix.

Inside the Church, along the entire width of the nave the organ choir is raised, which formed a rather dark porch with two stairways. Applications of wooden stars adorn the parapet of the choir. Neo-baroque altars and abundant mural and ceiling painterly decor add smartness to the space of the building. The imitation of coffering with rosette drawings is notable for professionalism. It is thought that these drawings of illusionary caissons are a simplified copy of the décor created by Karol Podczaszyński for the Library of Vilnius University at the beginning of the 19th century.

The Church built on a hill is surrounded by a stonework fence with a brick single opening gate. The gate with the opening of a semi-circular arch form and a triangular fronton in the niche of which a statuette of the Sacred Heart of Jesus is placed was completed to be built in 1930. On the left of the churchyard the brick belfry connected with the fence was erected. The belfry of a vertical rectangular volume is plastered, its four-sided sloping roof with a neo-gothic wooden turret ends in a metal cross. The belfry has segmented acoustic openings in the arch form and the door of the same shape. Next to the belfry there is a small mortuary– kaulinyčia [the ossuary]. 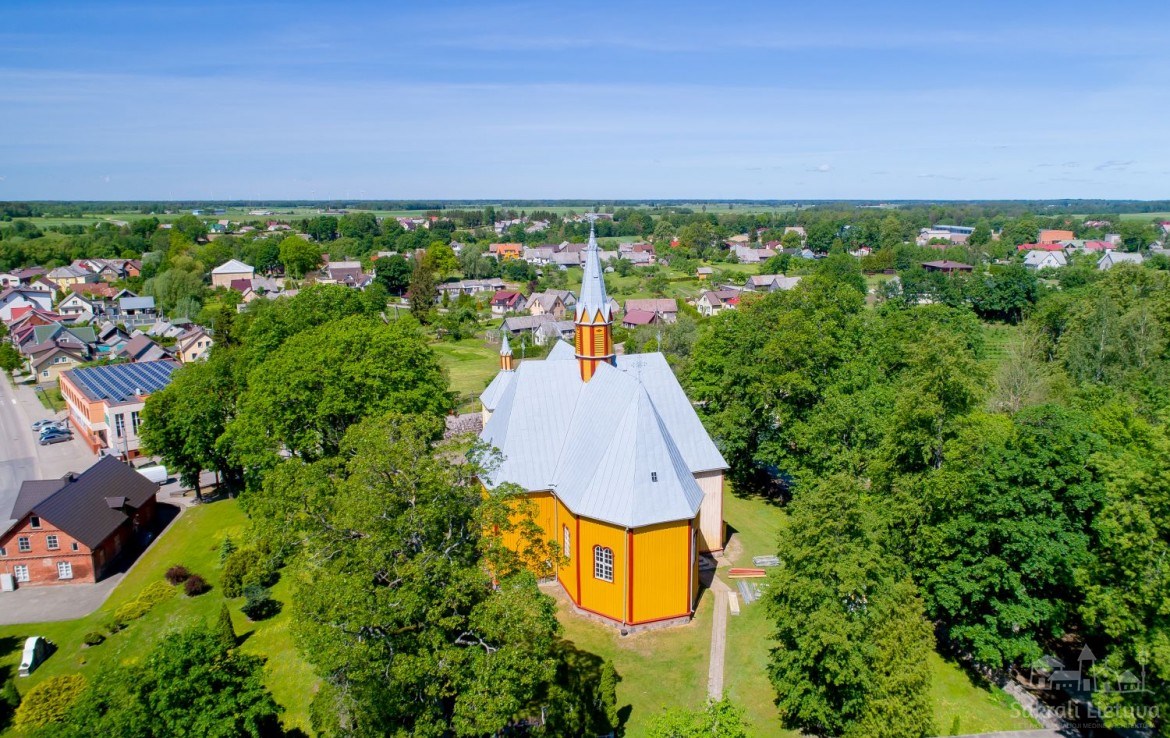 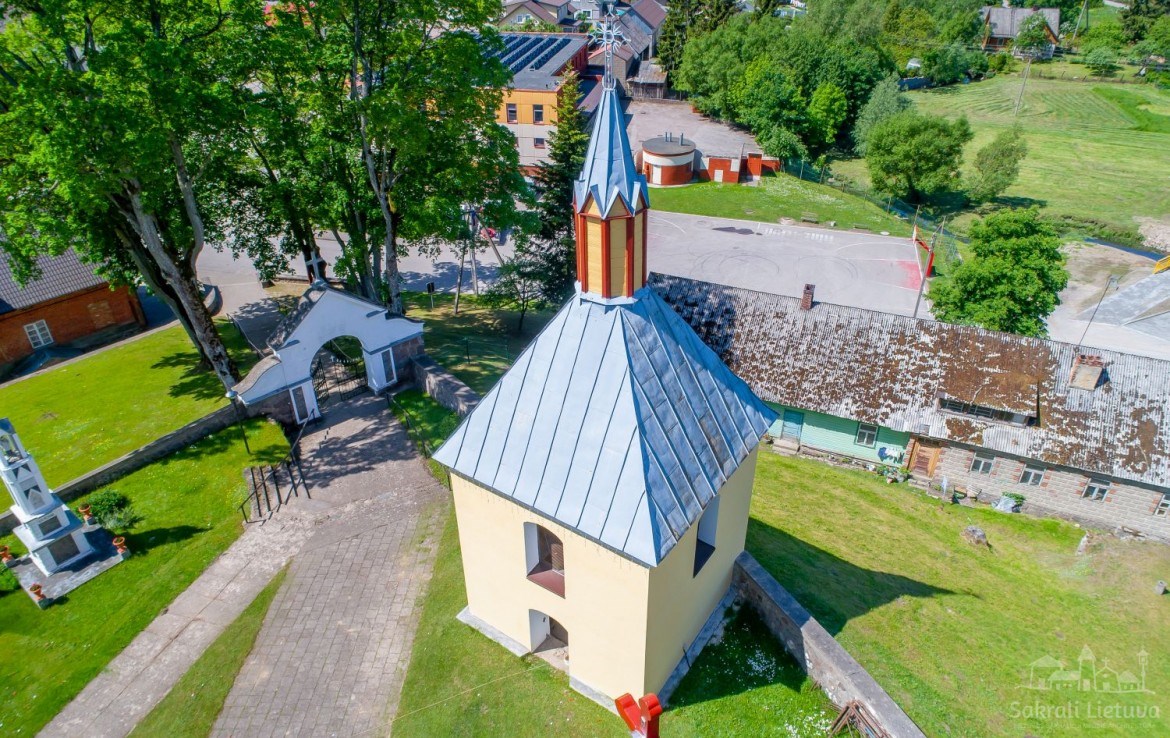 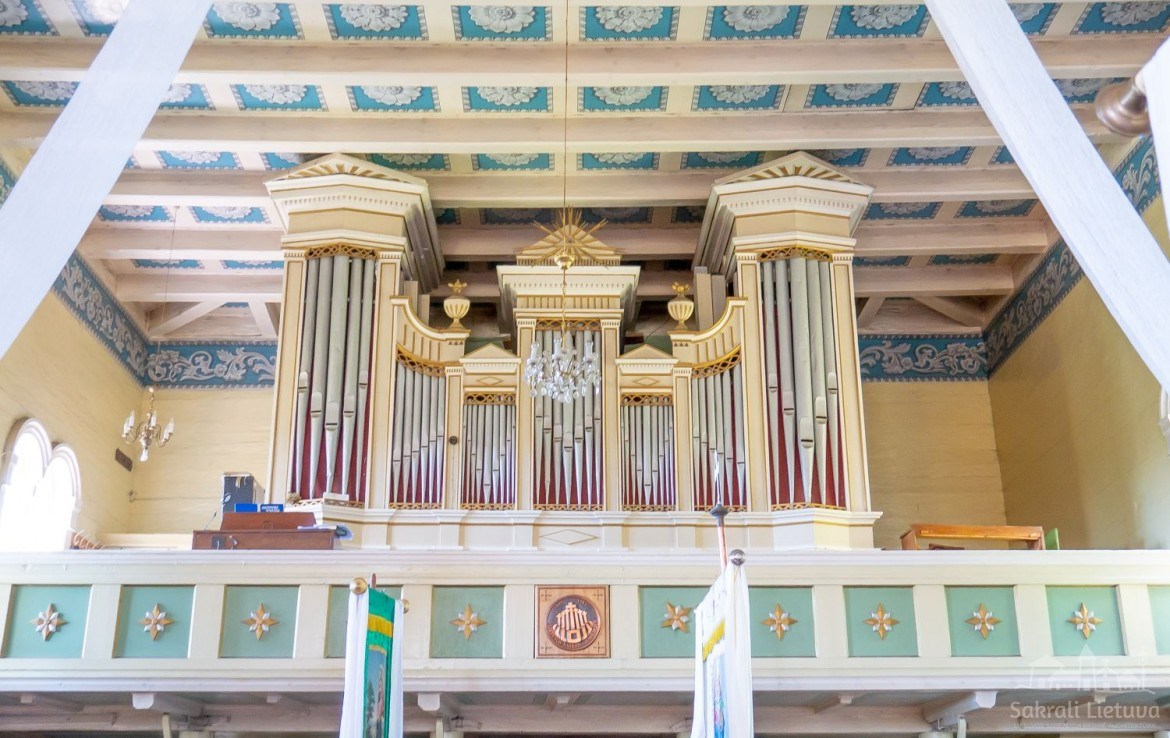 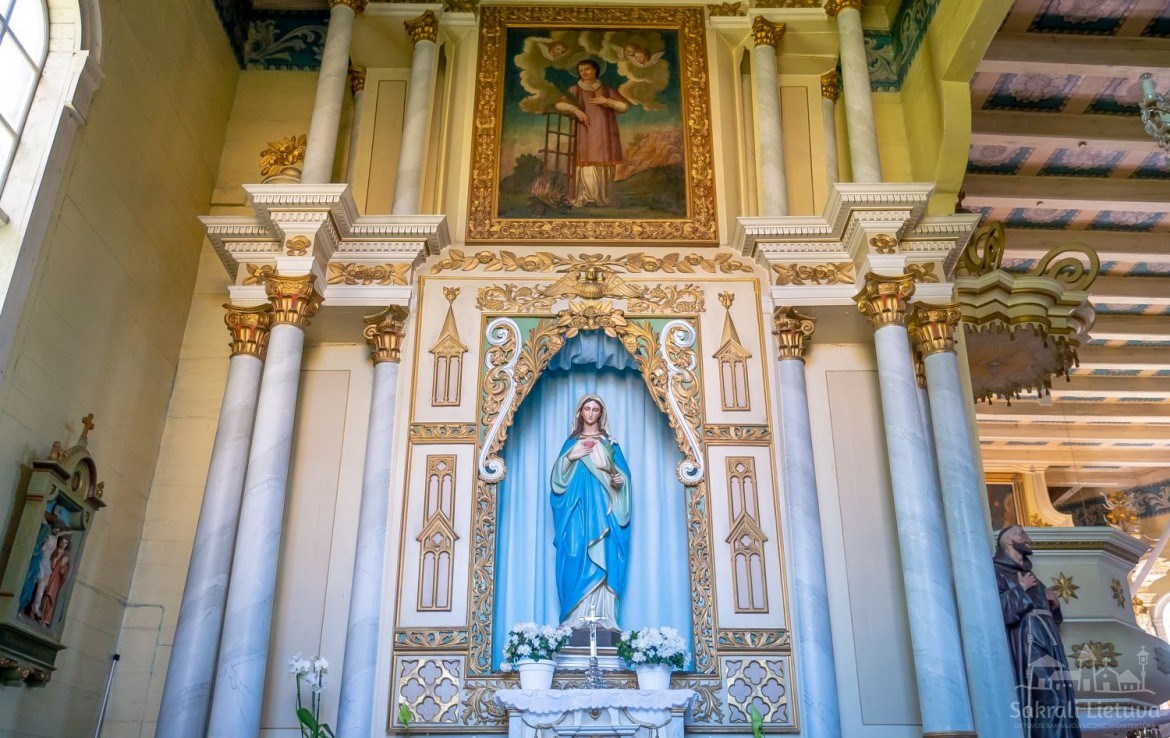 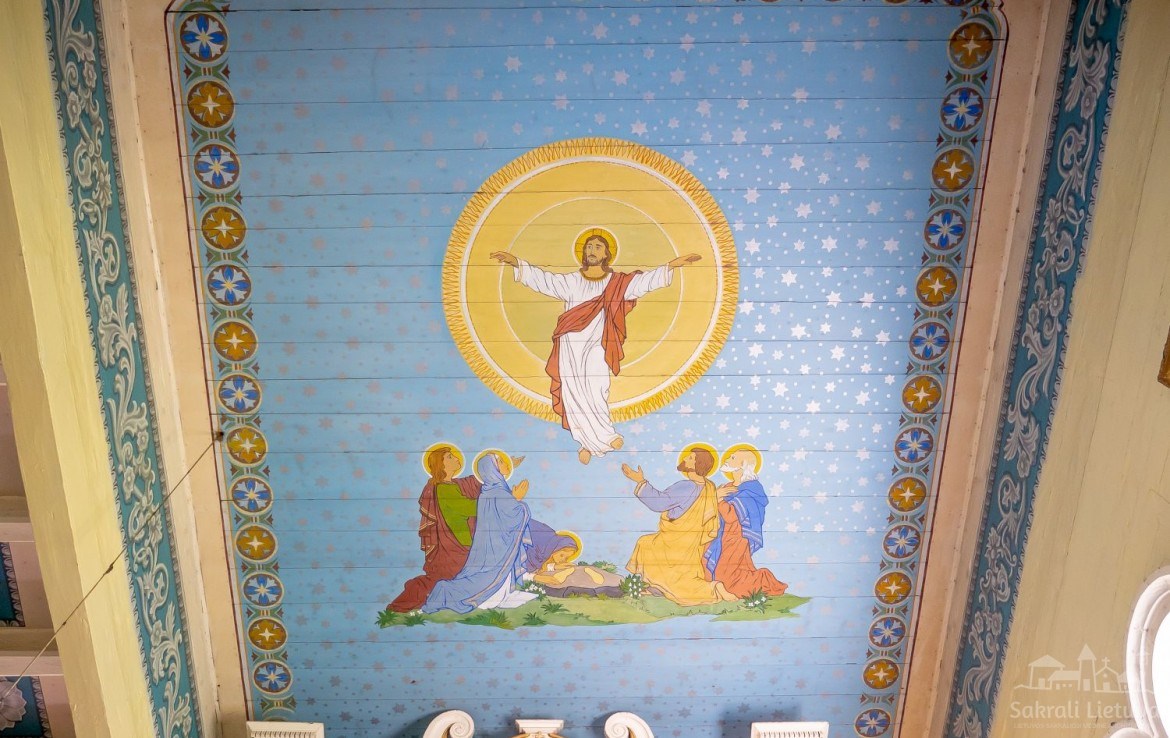 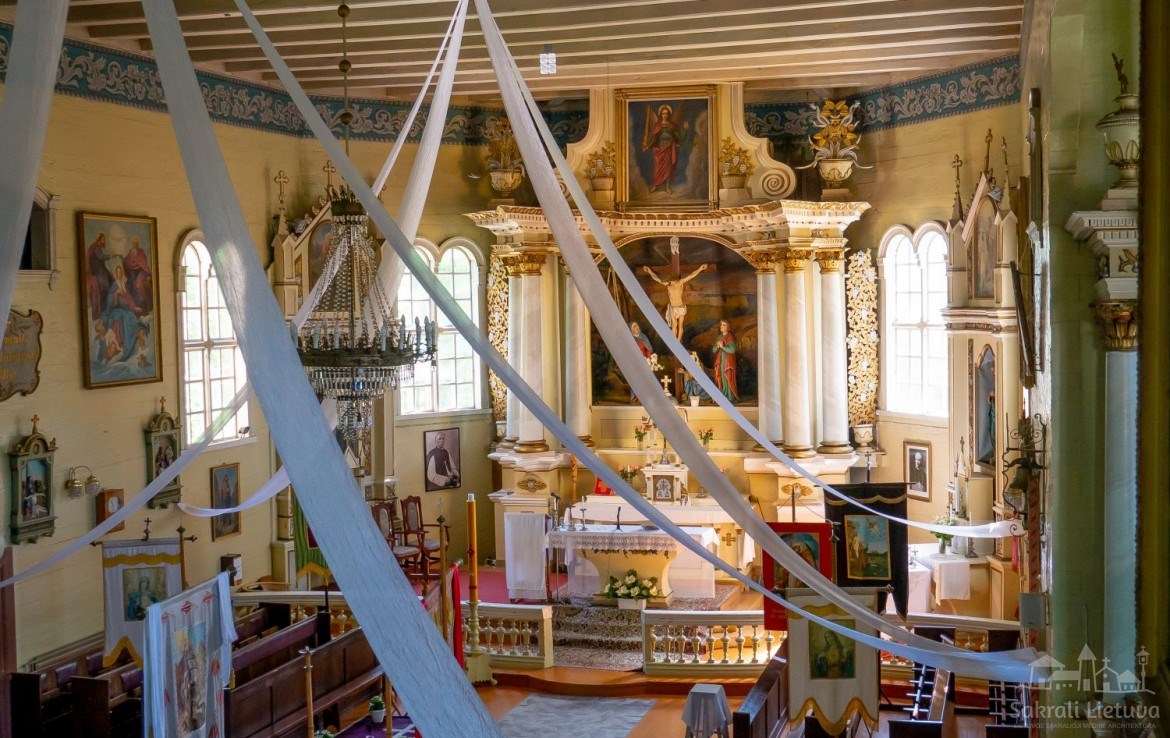 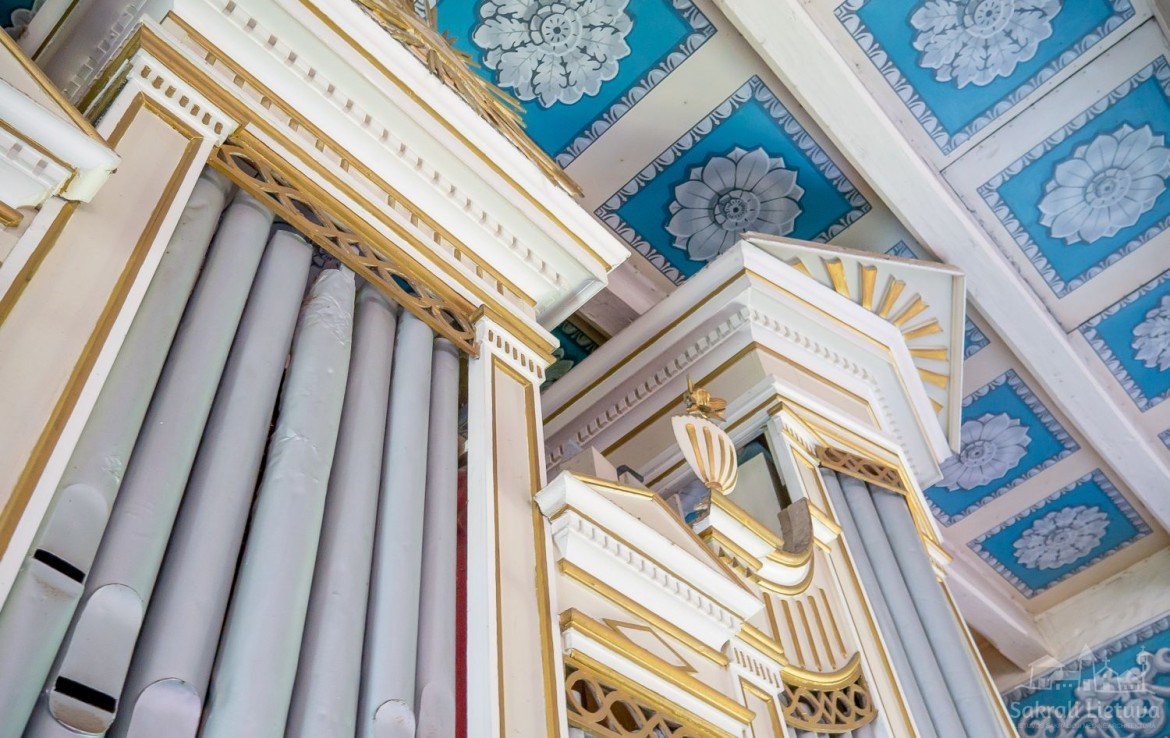 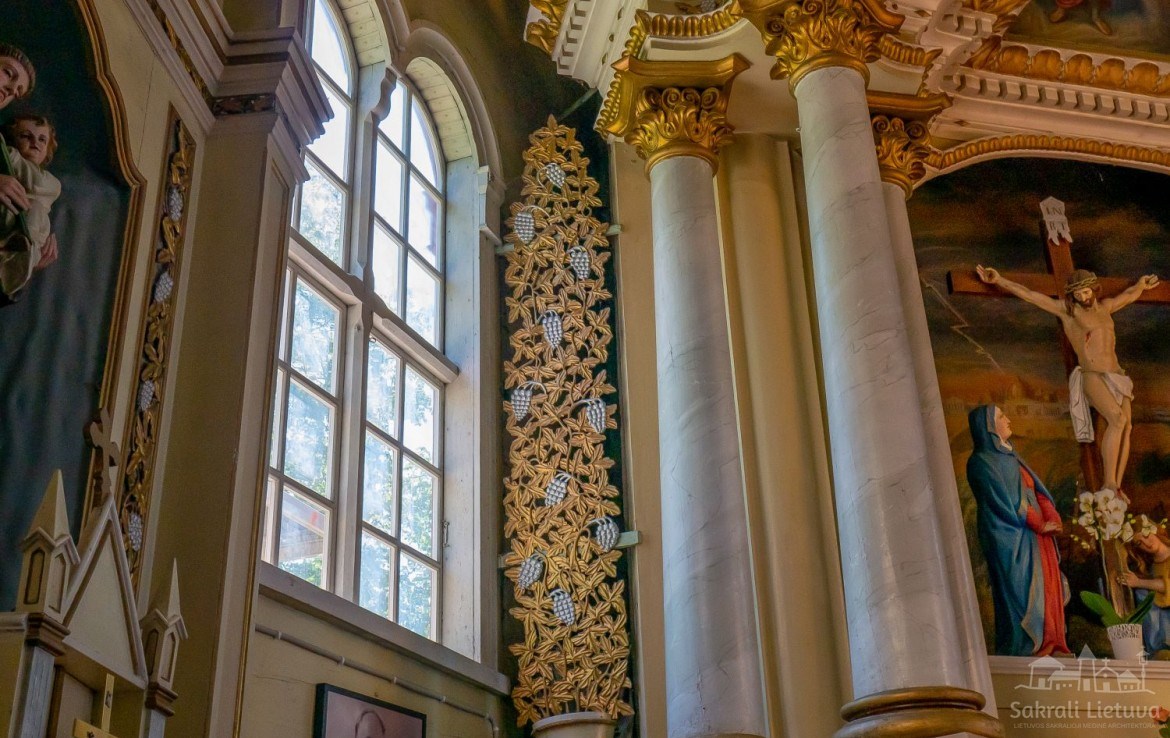 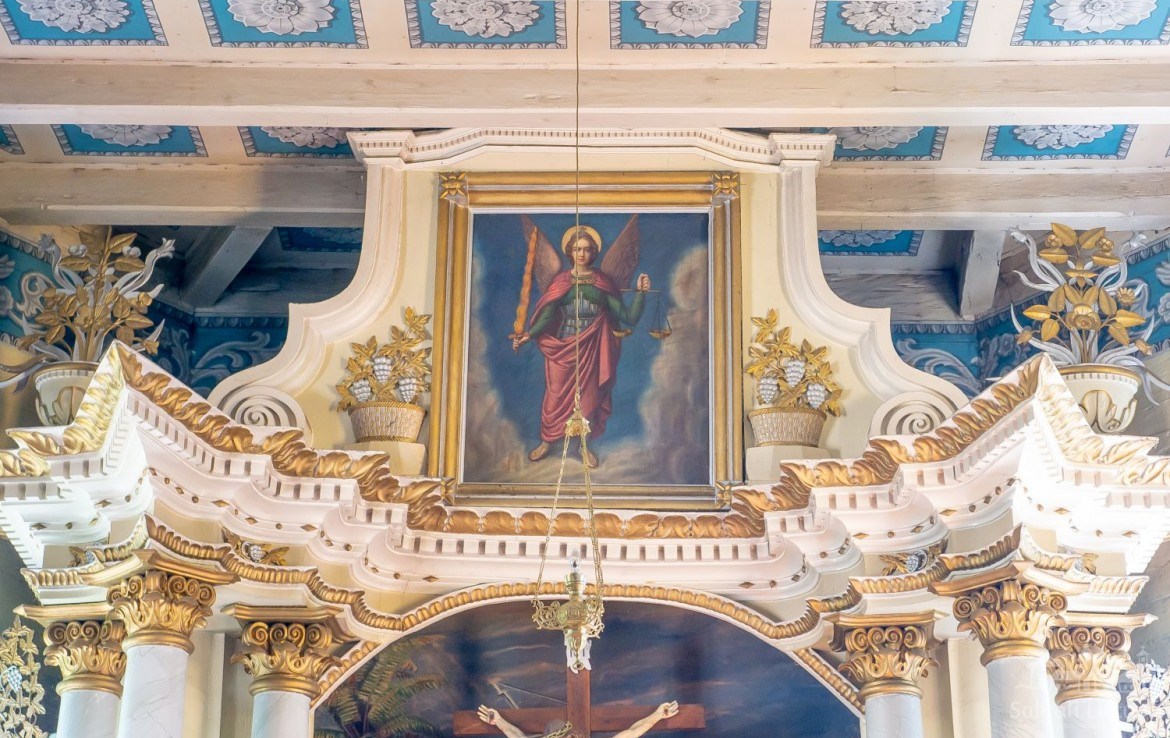 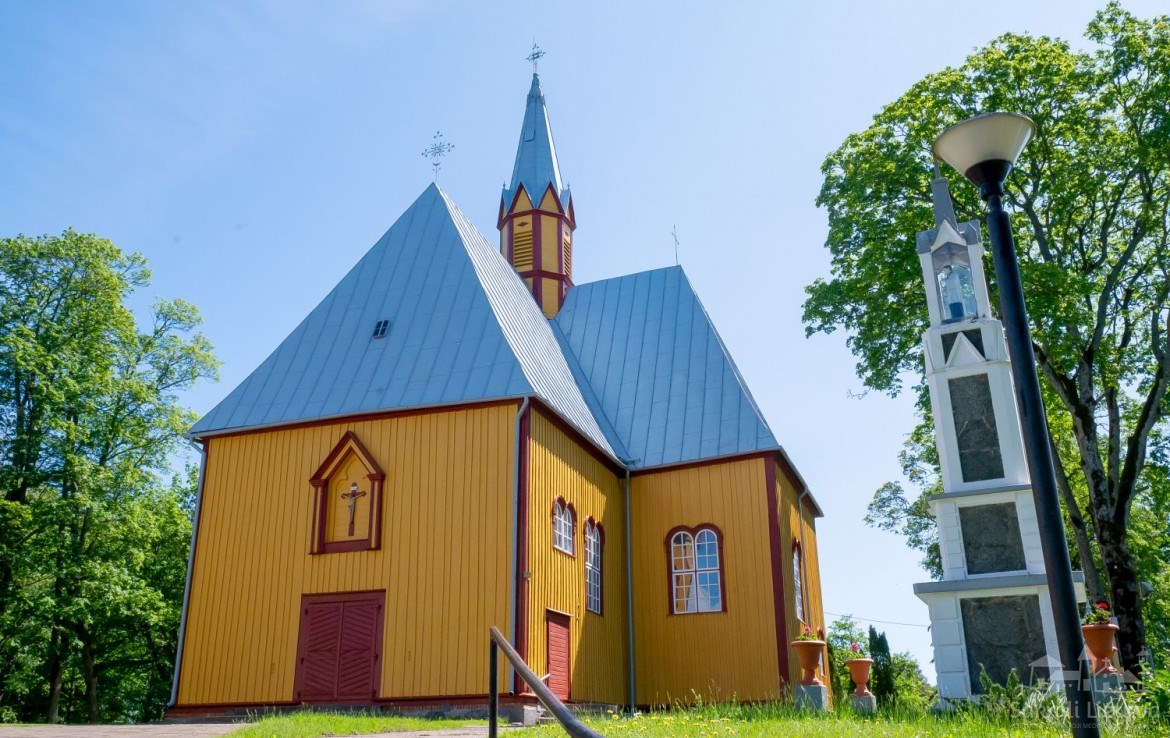 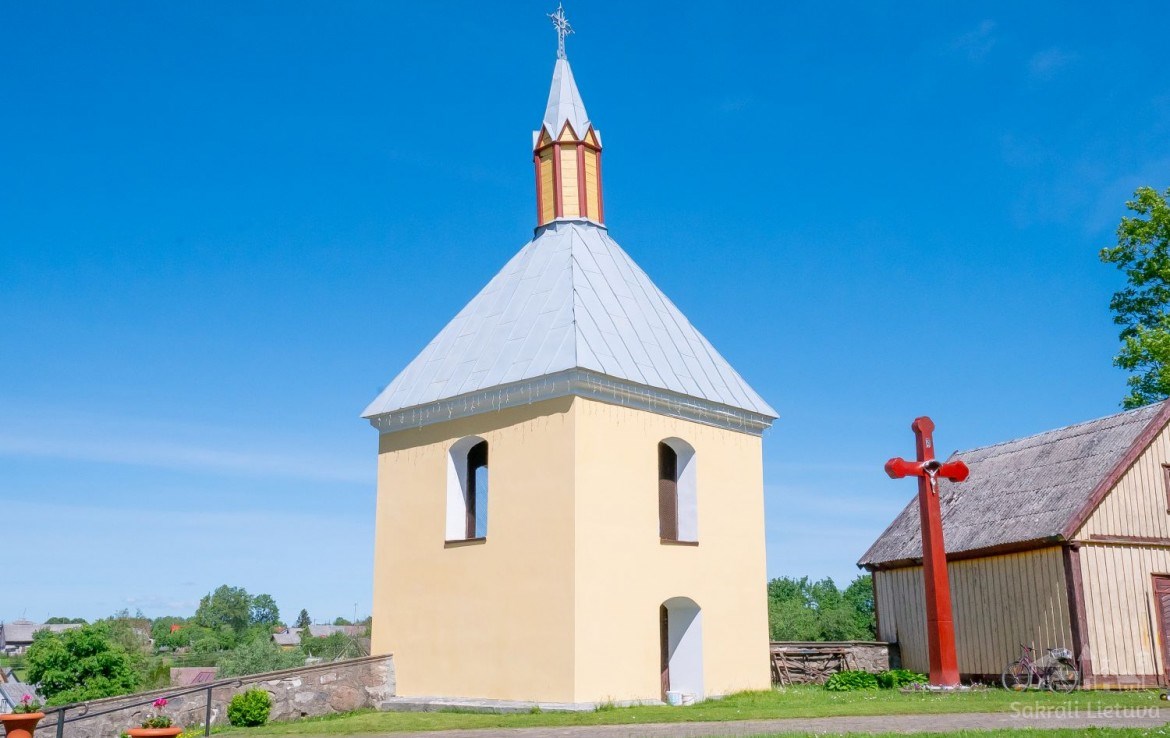 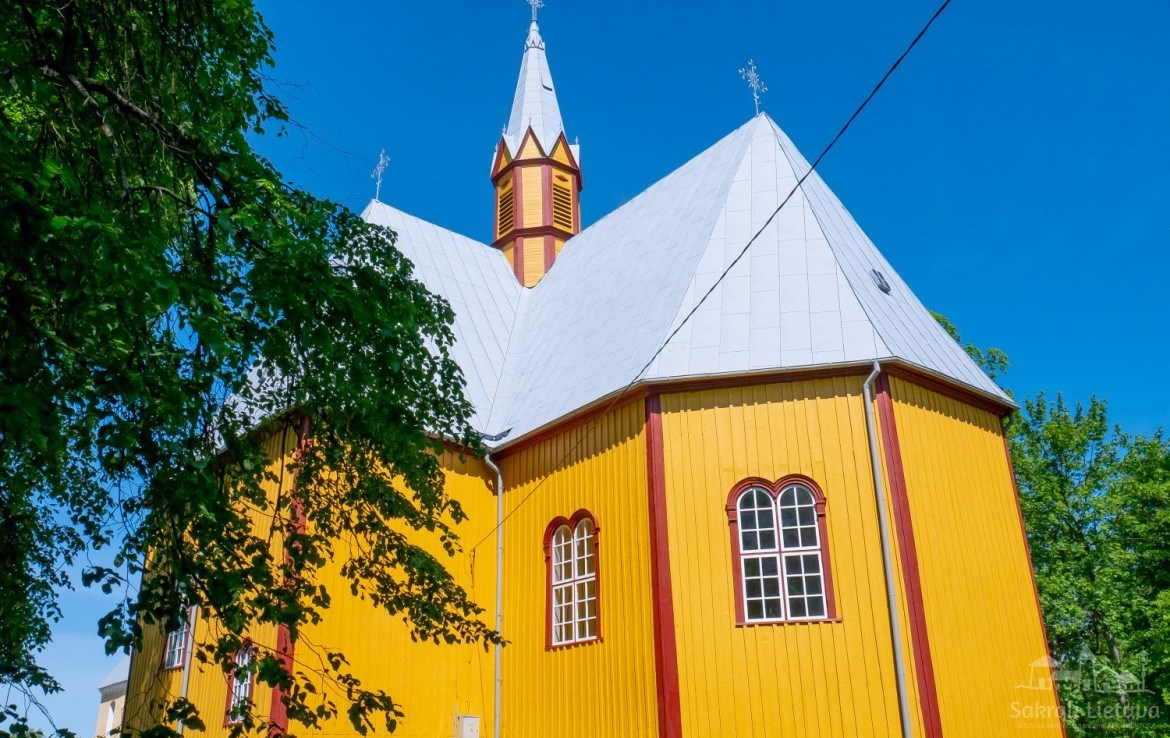 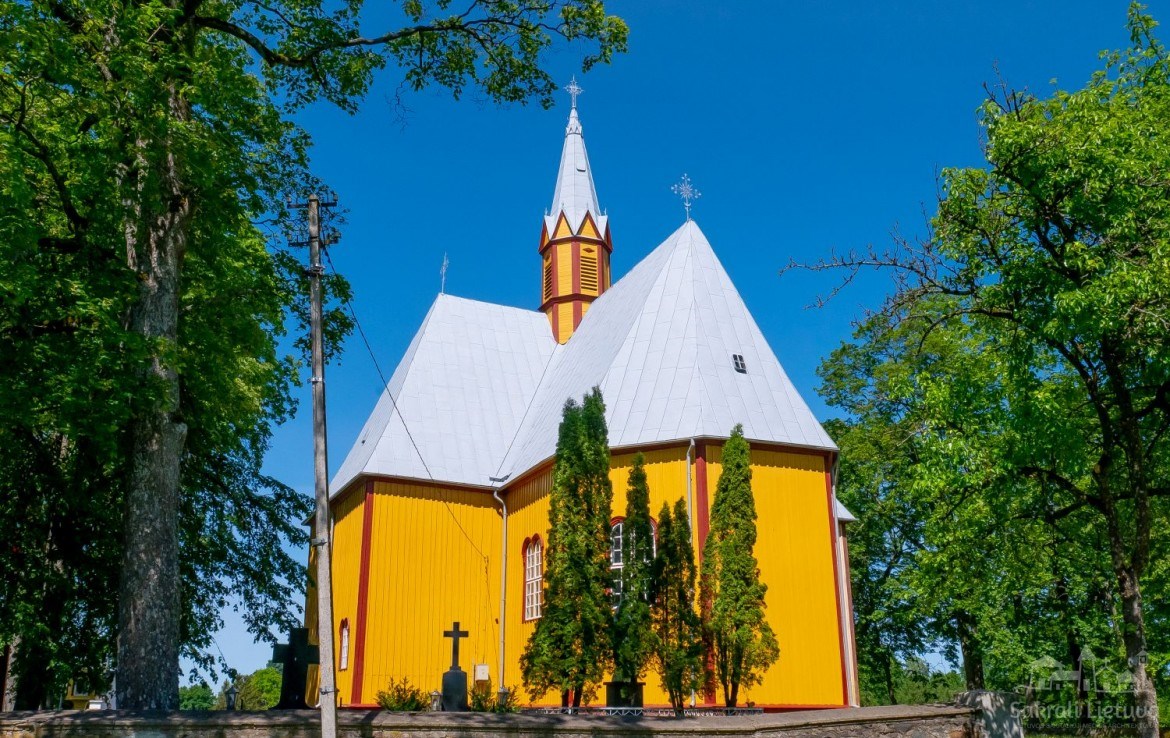 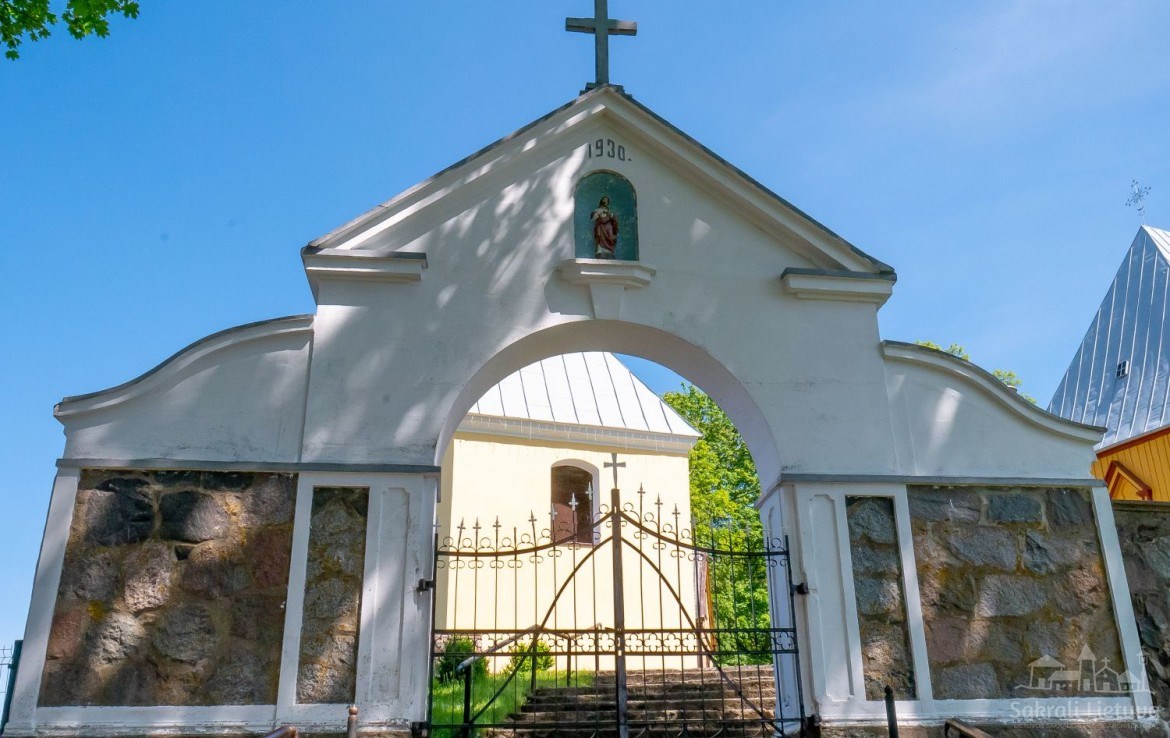 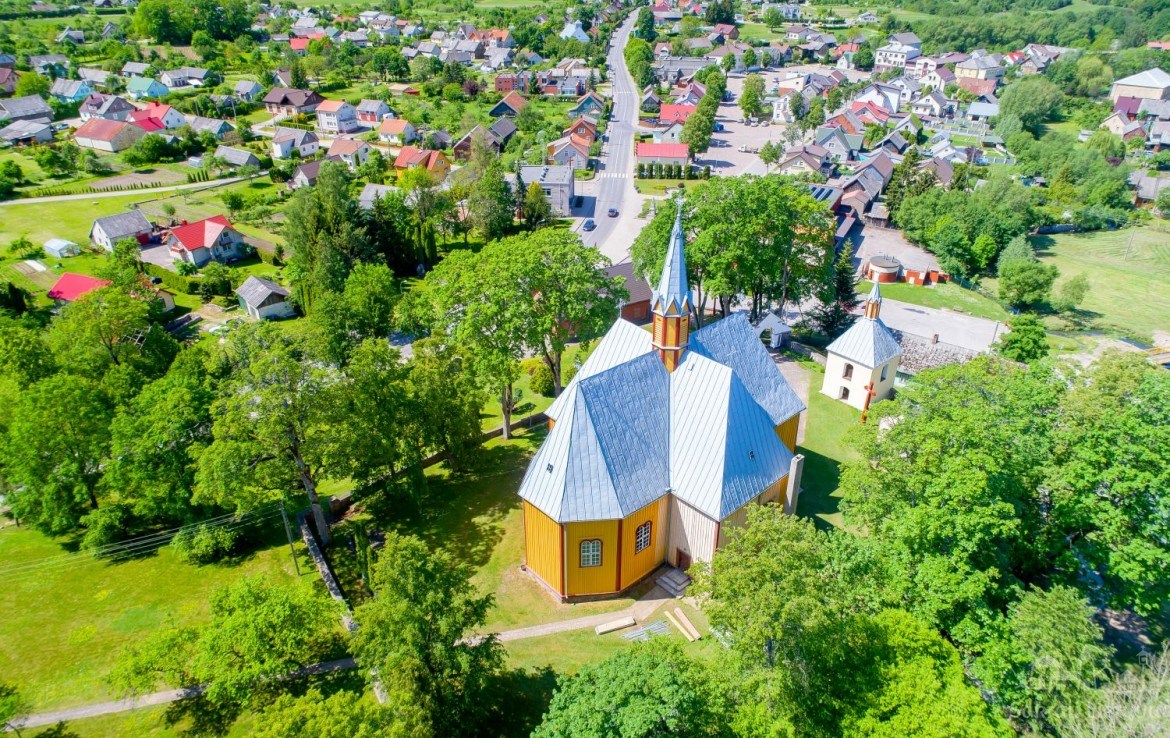