Church of St. Casimir and Belfry of Vėžaičiai

The landowner Earl Kazimieras Volmeris funded the construction of the wooden Church of Vėžaičiai, which was built on the land of his estate in 1784; his son Earl Leonardas Volmeris fitted the inside.

There were no large towns in Samogitia, which disseminated professional culture; society remained closed to a foreign influence and mono-ethnic. This was reflected in sacral architecture building mainly folksy churches. The present Church is also noted for the forms of vernacular architecture with some baroque features. A three-nave church of a rectangular plan, consisting of two parts, with vestries on both sides of the presbytery, was built on the opus listatum foundation. The walls are of hewed logs boarded with vertical profiled planks from the outside and covered with a tall gable roof. A turret decorated the ridge of the tall gable roof over the main façade. Another smaller turret is mounted over the apse part. Unfortunately, the earlier baroque turrets were rebuilt into simple quadrilateral ones in 1938-1939; hence, today baroque manifestations are more evident in the interior only.

Openings of the windows and doors are rectangular; only the openings of one fourth of a circle of the bay windows in the main (western) pediment of the façade are with wooden baroque surrounds. A wooden cross and the symbols A (Alfa – beginning) and Ω (Omega- end) are incorporated in the gable of the pediment. The large two-leaved herring-bone door of the Church has authentic forged metal hinges. Pilasters accentuate the entrance portal on the sides. The inside of the church is divided by rows of columns: wooden poles of quadrangular cross-sections with bevelled corners divide the inside space into central and side naves, the columns supporting the choir separate the prodomos at the front of the church from the remaining part.

The most valued possession of the church is a 10-voice organ with an ornate baroque prospect made by Vilnius masters. The organ was acquired in 1804. Recently the original organ was renewed. There are five altars in the church. The middle tier of the high St. Casimir altar is decorated with three grouped Corinthian columns crowned with a broken entablature arranged on different planes. The picture of Saint Casimir on horseback painted by Antanas Kmieliauskas is incorporated between the columns in the first tier and the picture of St Judas Thaddaeus is above.

More original elements have survived in the church: a wooden font with the nearby painting representing scene of the Baptism of Jesus, a moderately decorated old confessional of baroque forms, the stalls – benches with high backrests and carved and turned ornaments intended for the noble people. The rostrum of the polygonal pulpit built in the presbytery is amply decorated with gilden relief carvings with plant motifs. Over it there is an elaborate canopy with a stylised crown with a statuette of St. John of Nepamuk.

A wooden belfry of a quadrangular plan and solid volume covered with a four-sided sloping roof stands in the churchyard. It contains a brass bell cast in 1816. The belfry has frame walls, like those of the Church, boarded with vertical profiled planks. There are four acoustic openings with closing shutters.
At the beginning of the 20th century, a stone statue of Saint Joseph with an Infant in his arms was erected on a tall brick plastered pedestal in front of the large door of the Church in the western part of the churchyard. Vytautas Motekaitis who was the dean in Vėžaičiai and the priest Vytautas Skiparis (1996-2006) who had the roof of the Church and the belfry replaced and the Church repainted are buried in the churchyard. Since 2007 the inside altars have been restored, benches and walls repainted. 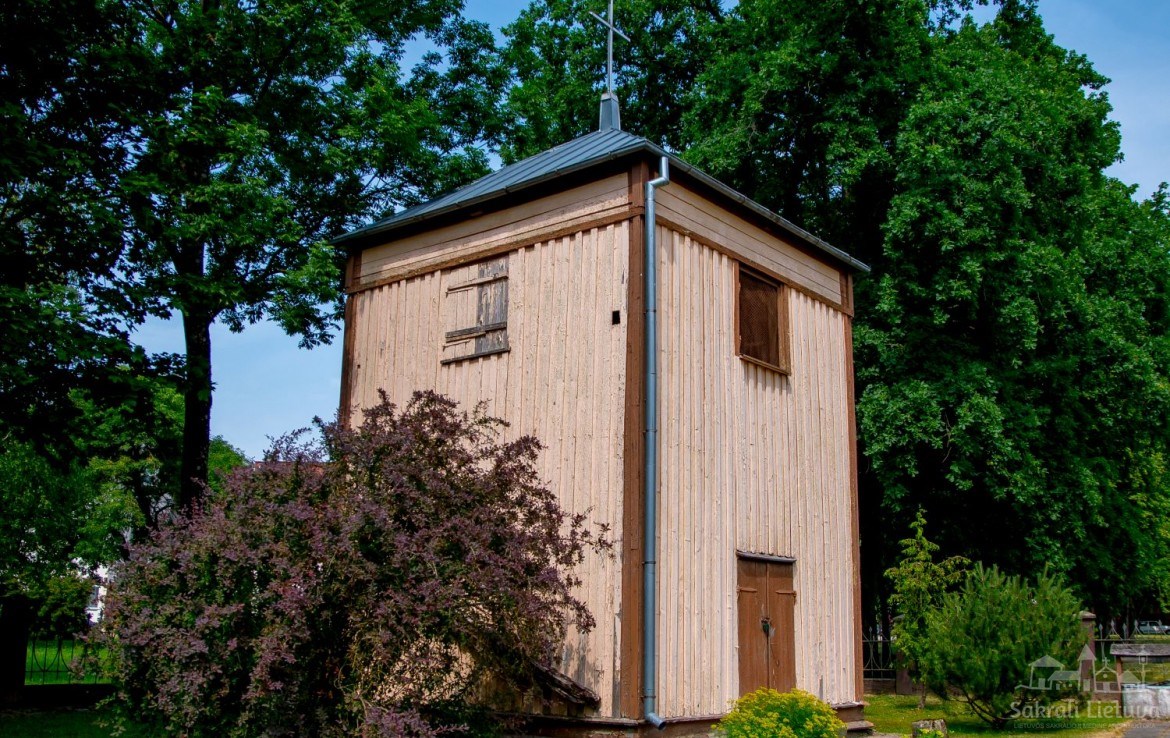 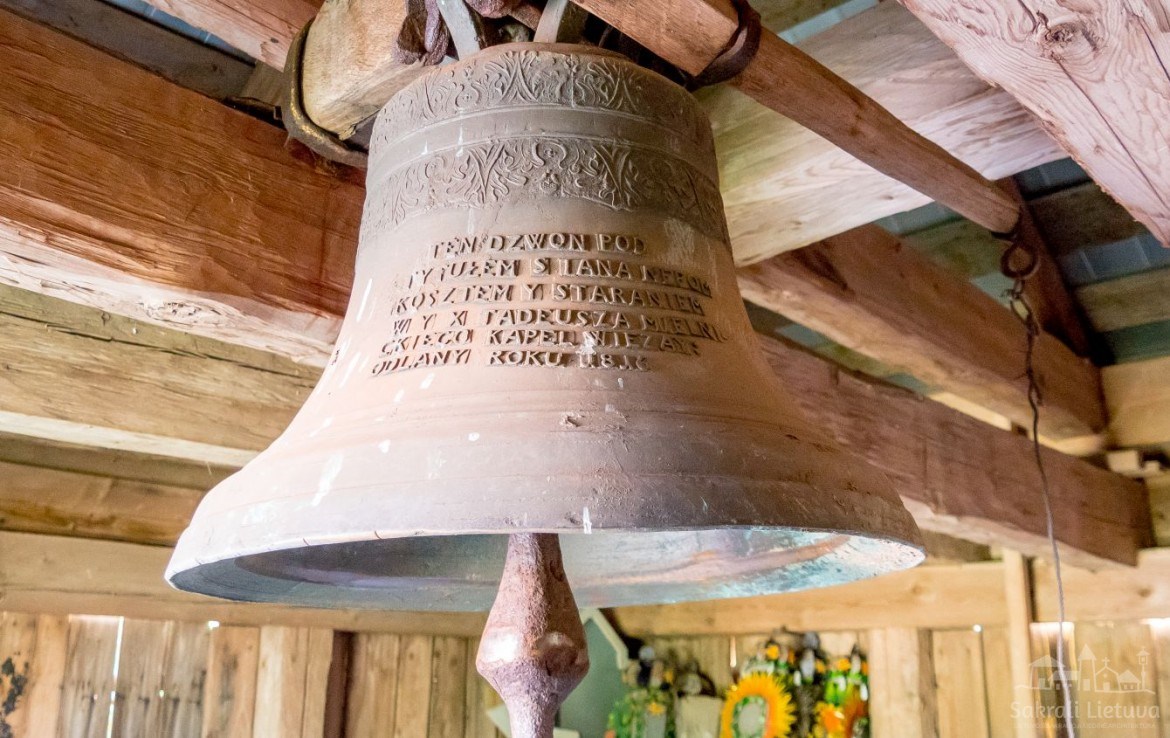 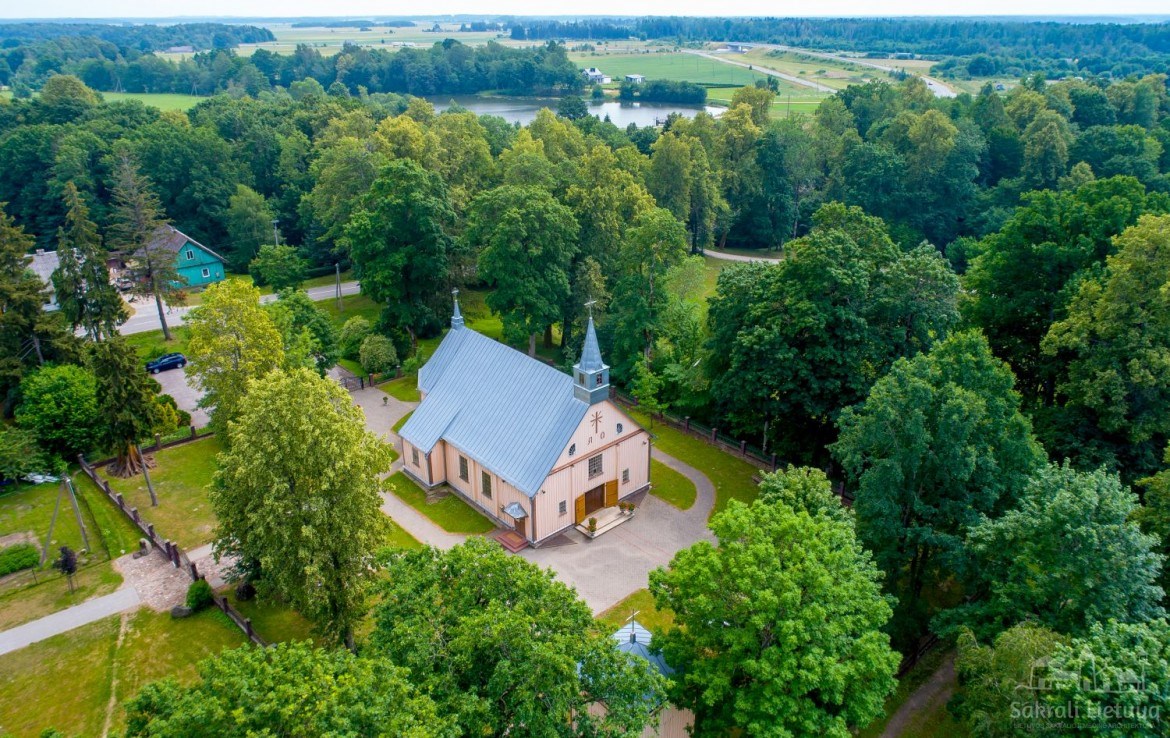 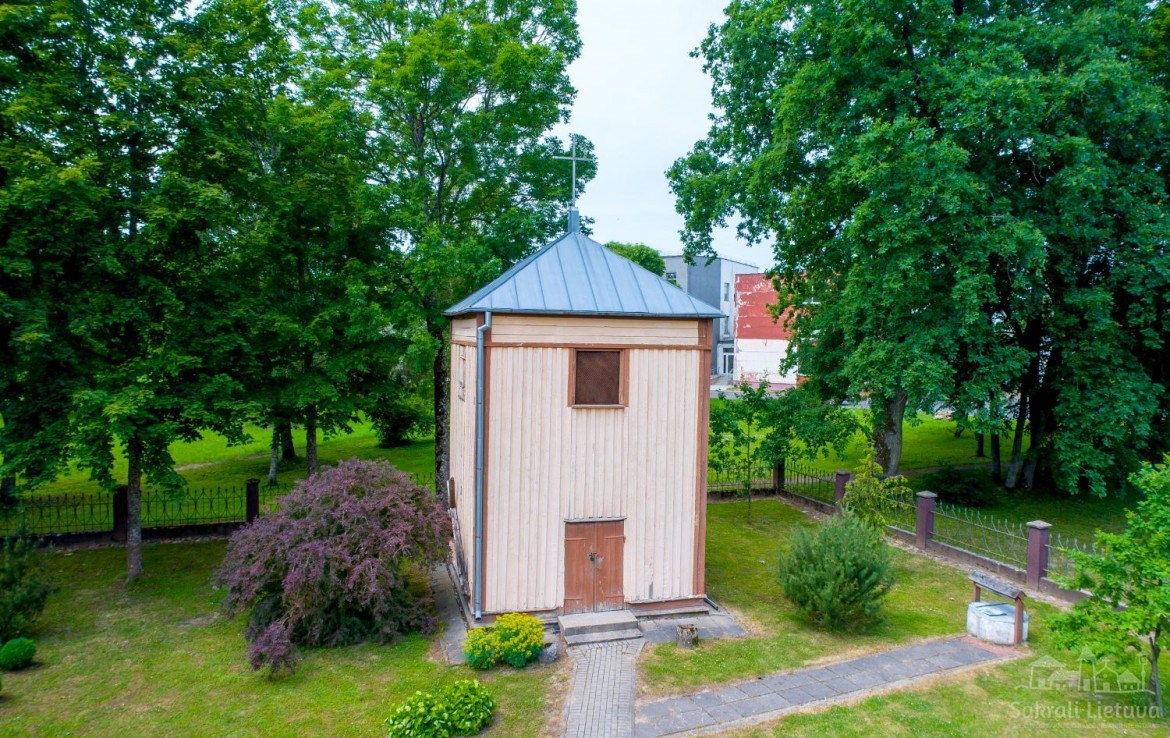 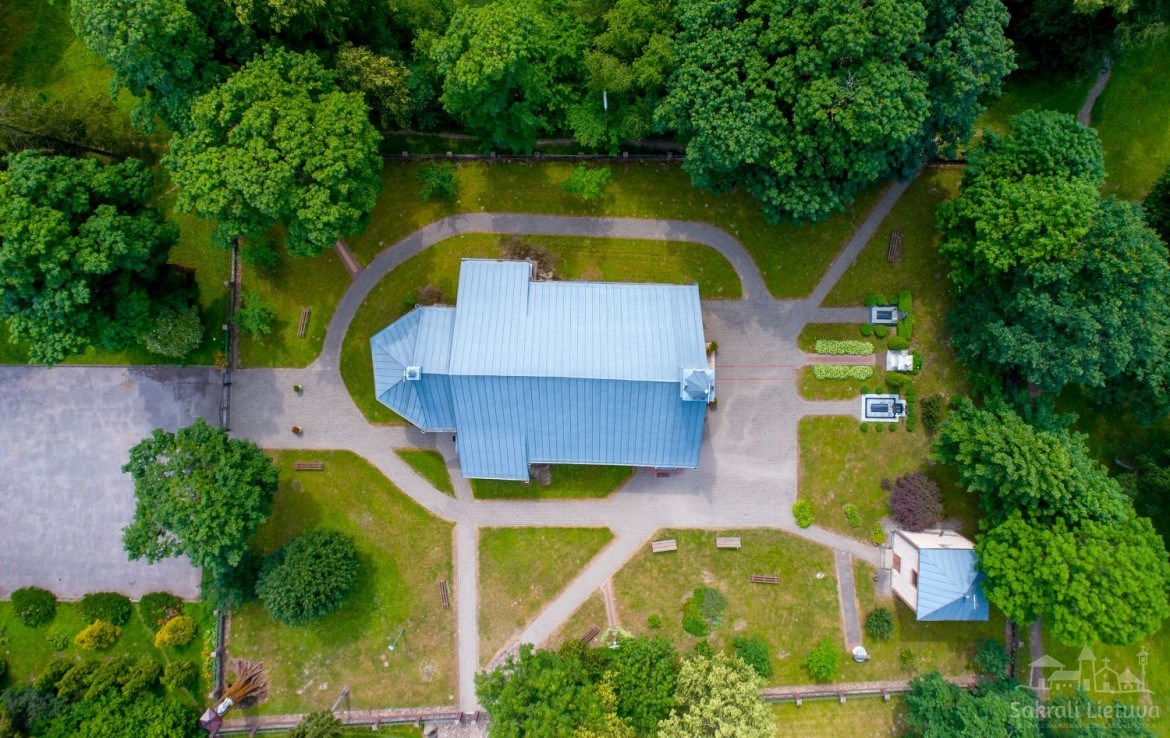 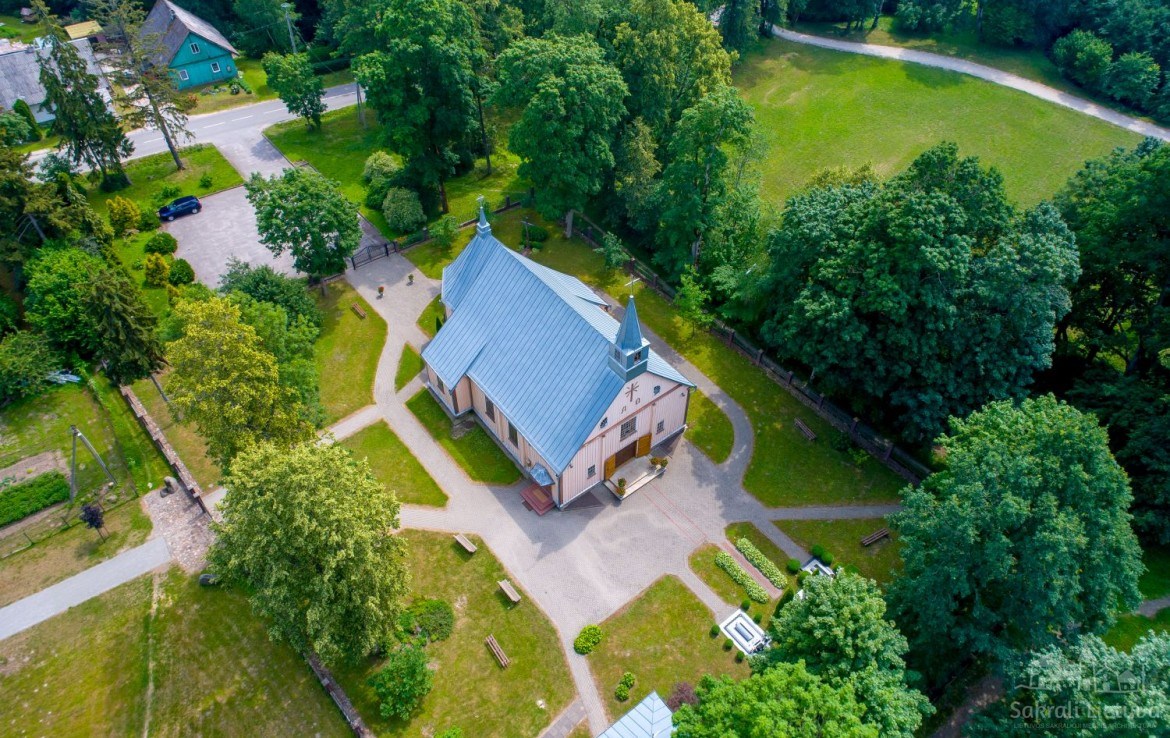 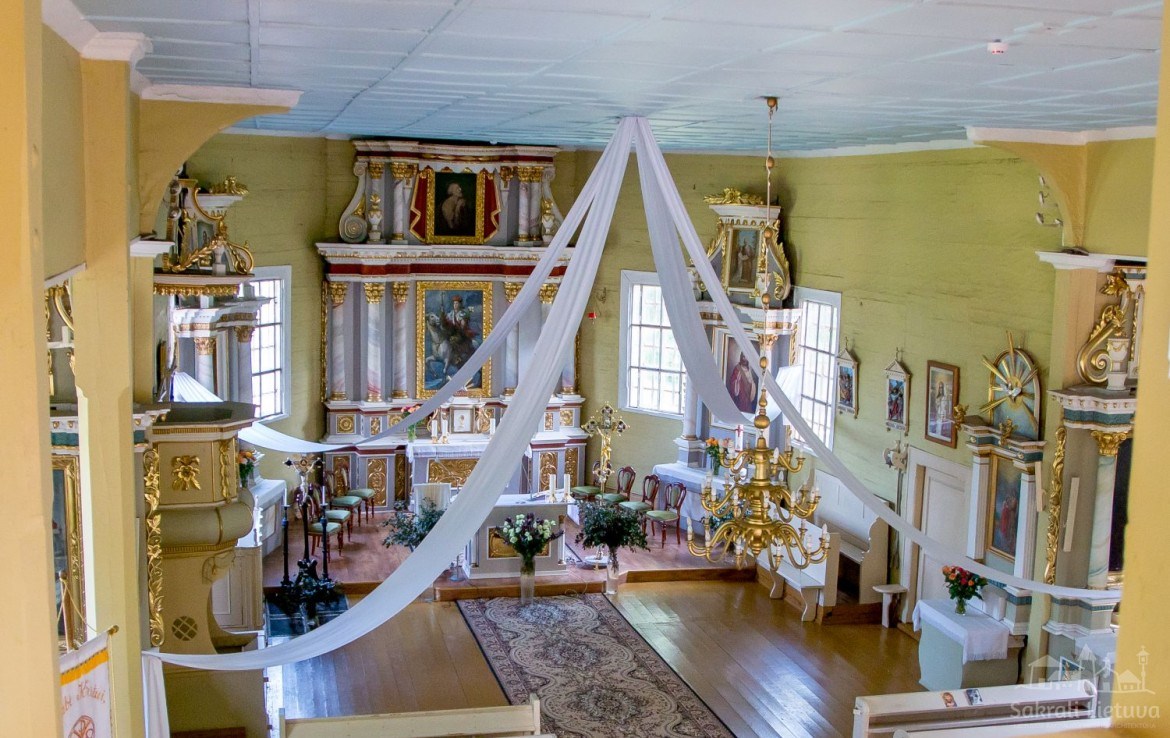 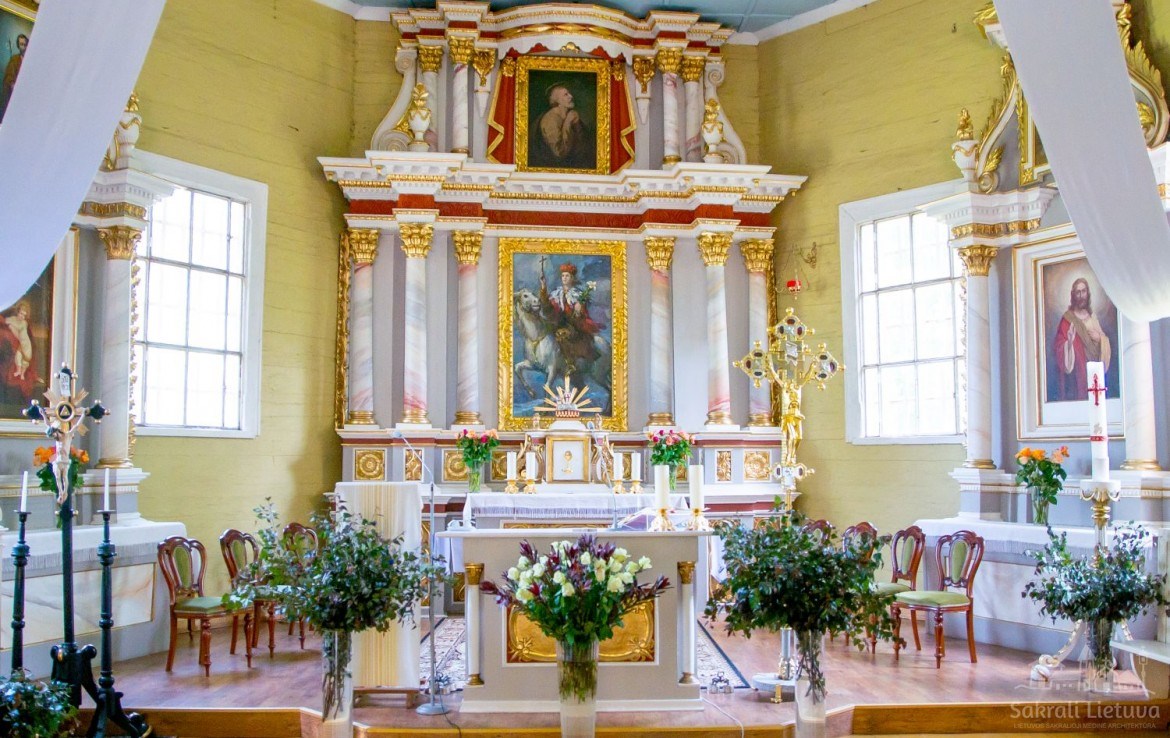 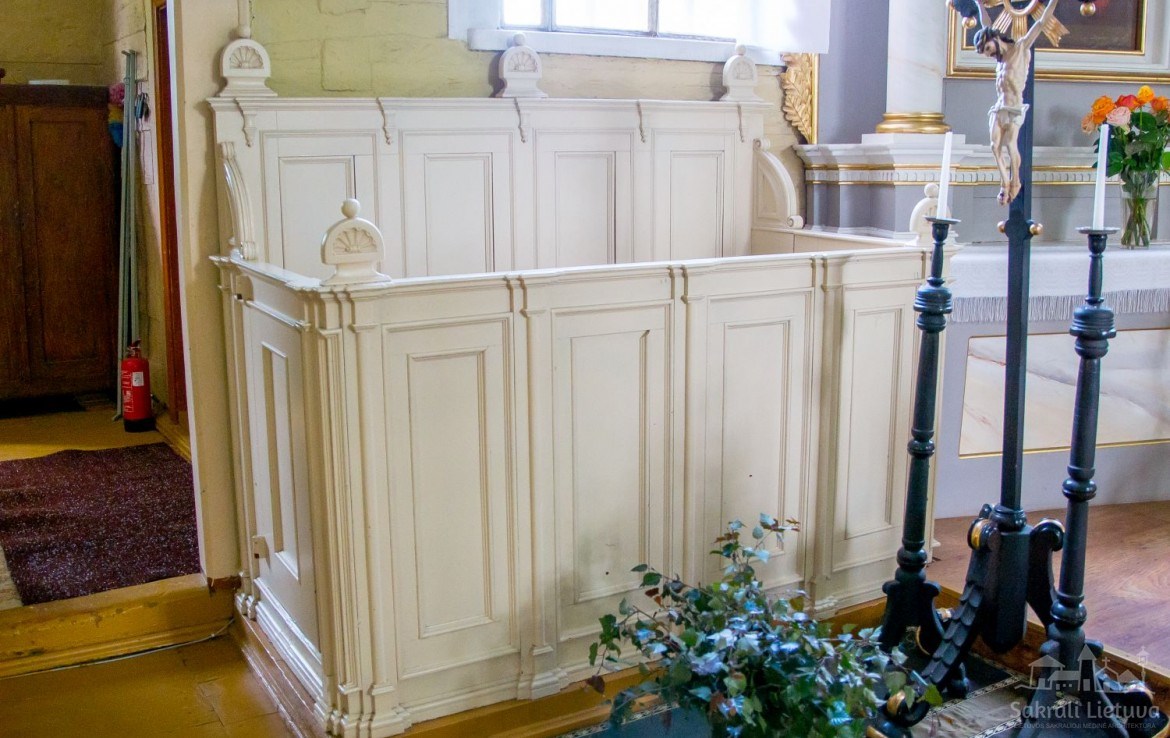 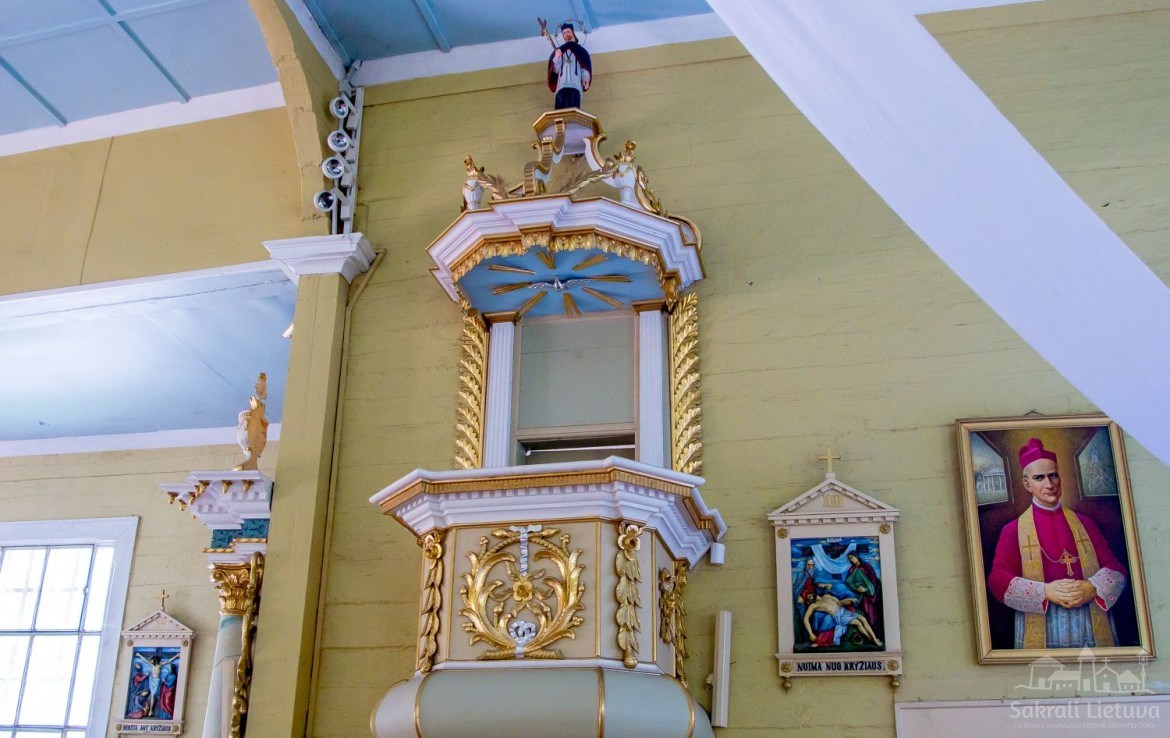 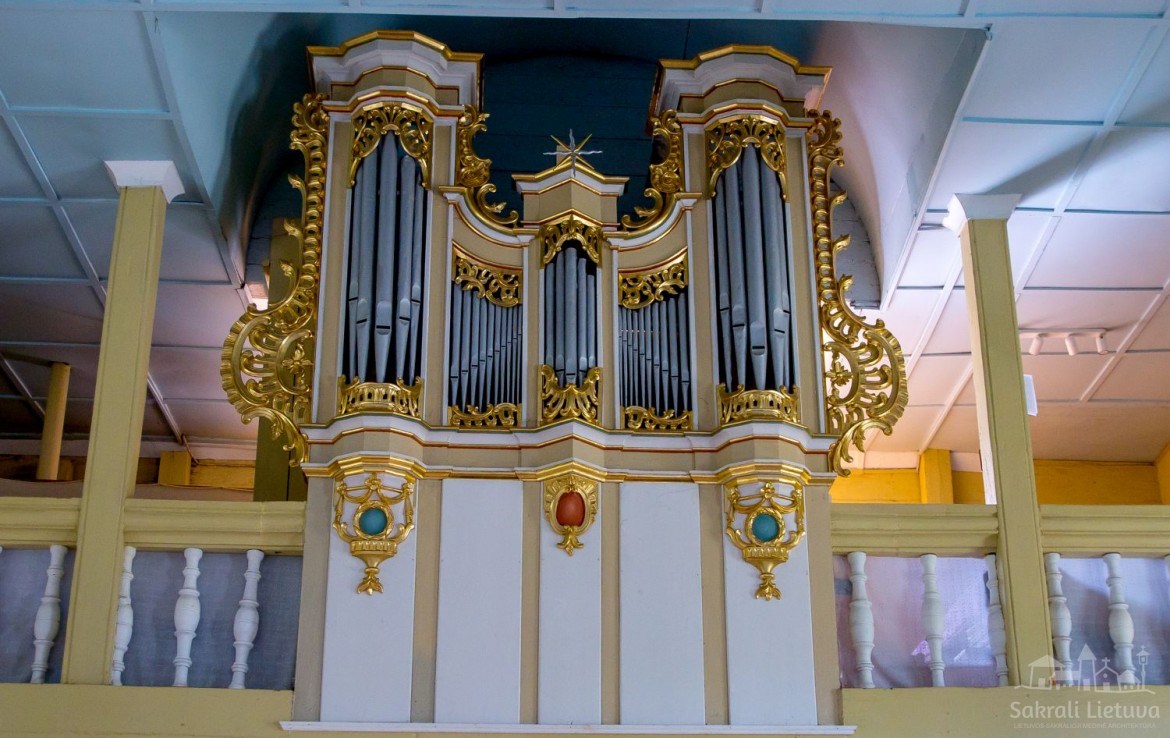 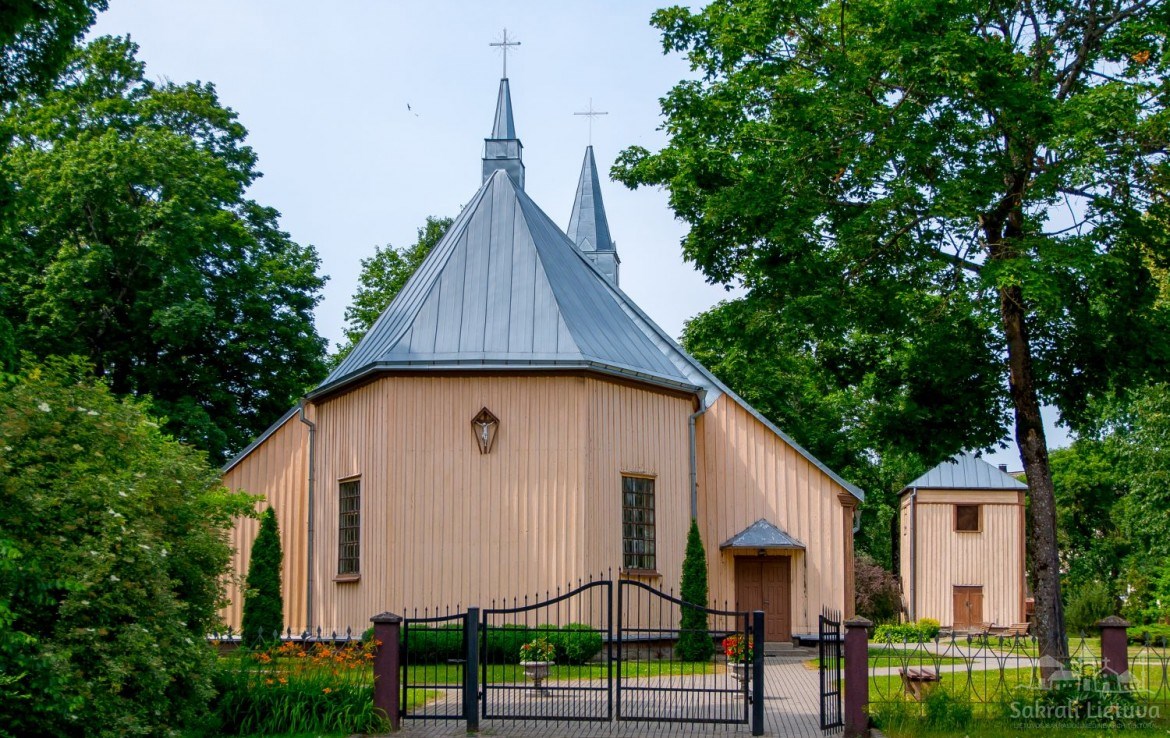 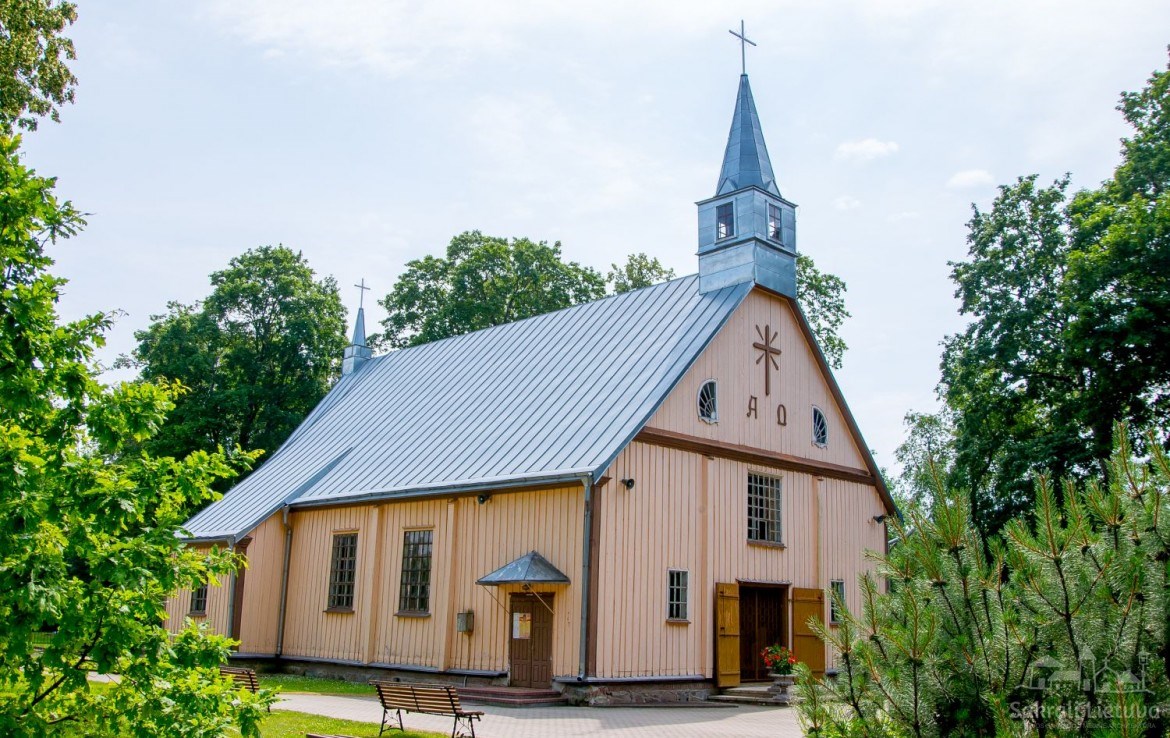 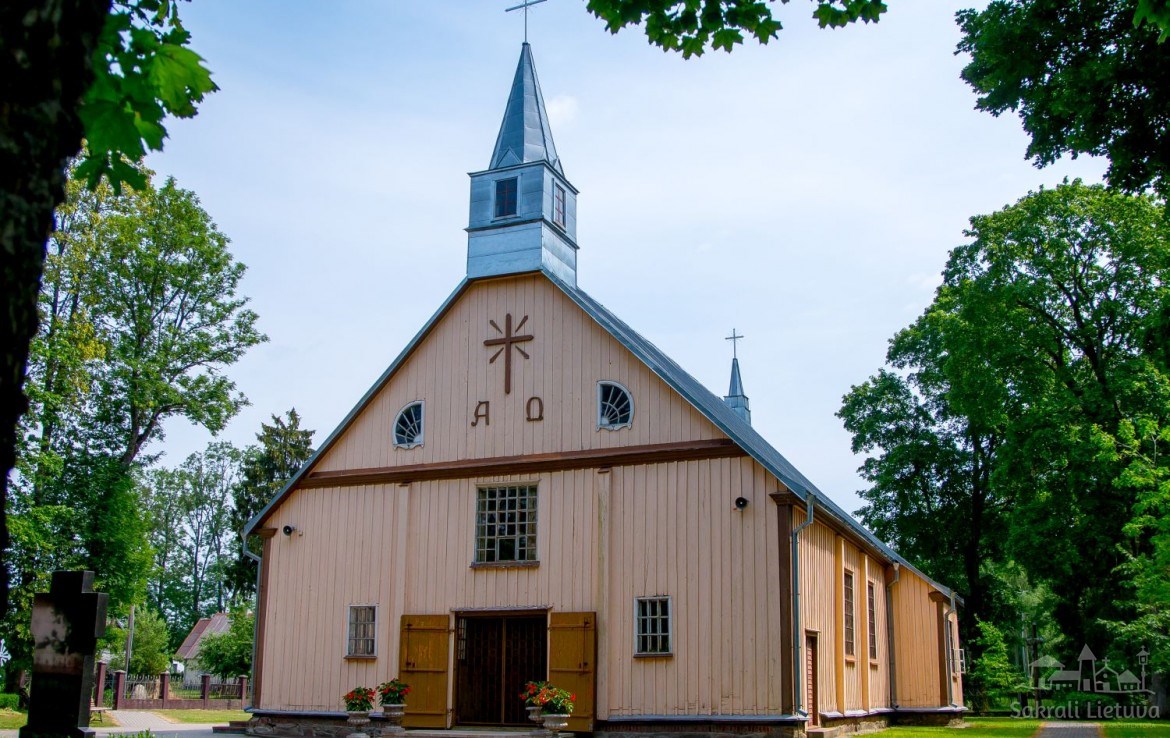