The Church of St Guardian Angles in Ūbiškės of the epoch of Romanticism built in 1851 has features of classicism and vernacular architecture. The Church is compact, rectangular with a tree-wall apse and the porch attached to its western façade. The foundation is of broken stone, the walls are made of logs boarded vertically with narrower battens on joints of the boards. It has a gamble roof, and the roof of the apse part is with three sloping sides. At the front, a decorative turret rises from the pediment. It was built later, after the old spire of the Church was torn down in the storm in 1896. A polyhedral turret of neo-gothic style amply adorned with tapering windows of decorative segmentation, small pediments and a spire are built on a quadrangular foundation. The turret of the same stylistics only somewhat smaller adorns the apse too. The main façade contains a portico of four wooden poles of a round cross-section with brick pedestals. The fronton is boarded slantwise creating a pattern of the upturned herringbone. Bay windows of round rosettes are placed in their sides, a three-part window with profiled surrounds is in the centre; a statute of the Virgin Mary adorns its middle part. The door of the Church is two-leaved boarded in a rhomboidal pattern, over it there is a two-part finely segmented window. Other windows of the Church are of the same decorative mesh pattern.

The three-naved inside of the Church is pseudo basilican, that is, taller than lateral central naves, the windows imitating semicircular arch niches are seen in the ceiling. Quadrangular poles with carved supports holding the church choir separate the open prodomos from the central nave. The inside, as well as the openwork windows and the surrounds of chandeliers, is neo-gothic. The light high altar of the Crucifix and the pulpit with a baldachin decorated with bas-relief carvings stand out. The niches are decorated with painterly décor, as well as the vault of the apse imitating a dome.

A tall belfry belonging to the Church is of rectangular plan with a small flat pediment and an open gallery supporting a quadrangular capping covered with shingle; it is decorated a forged cross with a figurine of an angel. The wooden chapel of Kazimieras Mockus and Kazimieras Andreika standing in the territory of the Church surrounded by a graveyard is worth mentioning. This is a small one-storied building of quadrangular volume with a four-sided sloping roof. Profiled sheathings adorn the corners of the chapel. Wide windows are decorated with dentil sheathings. The churchyard is surrounded by a stone wall; the gate is of the ogee arch form with the small side gate of opus tectorium. The wall and the gate form the parameter of almost a rectangle. 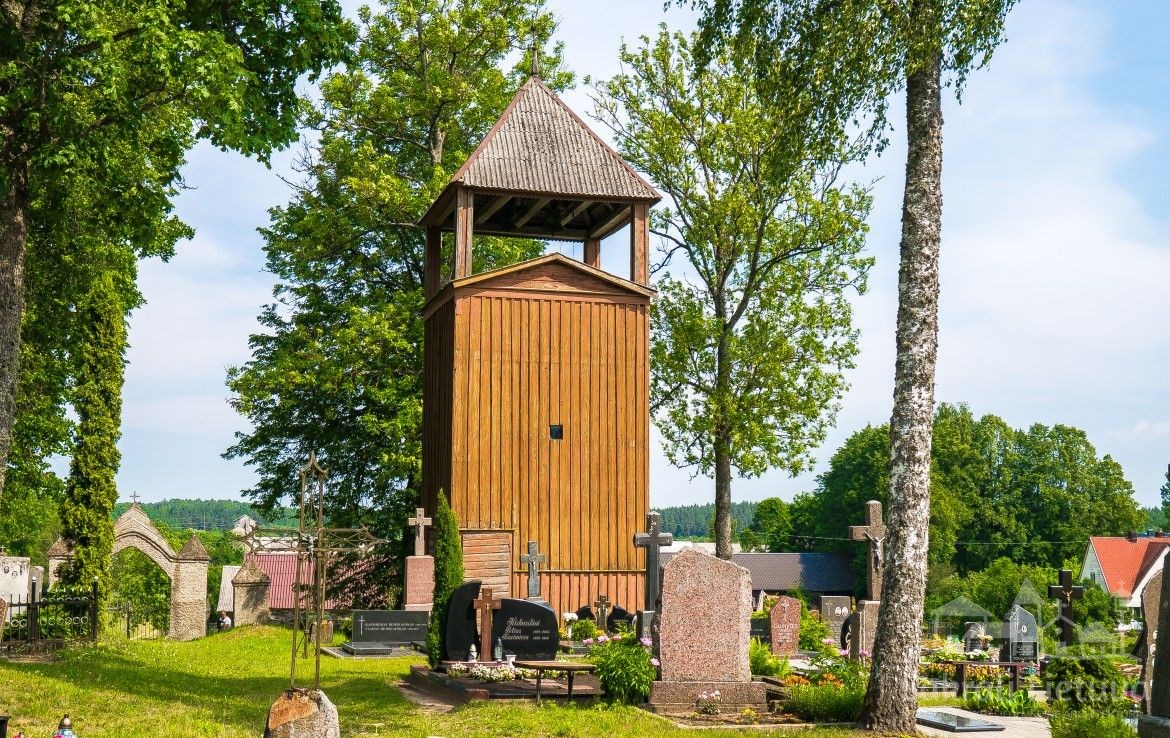 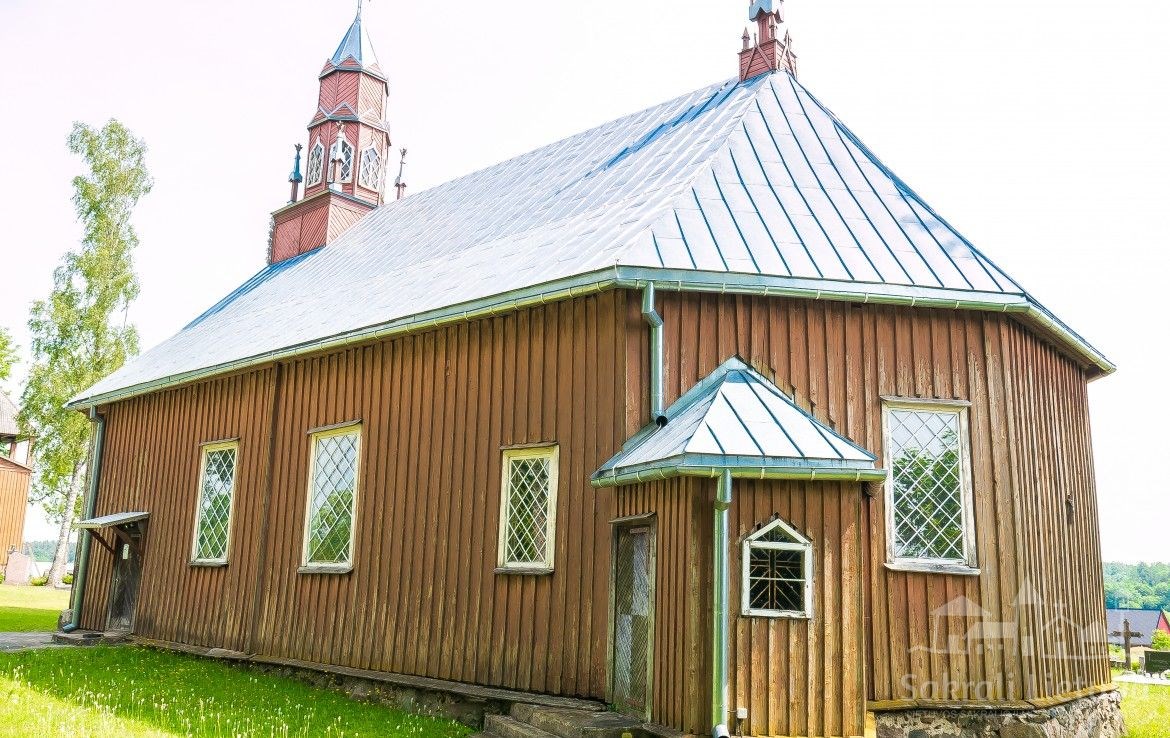 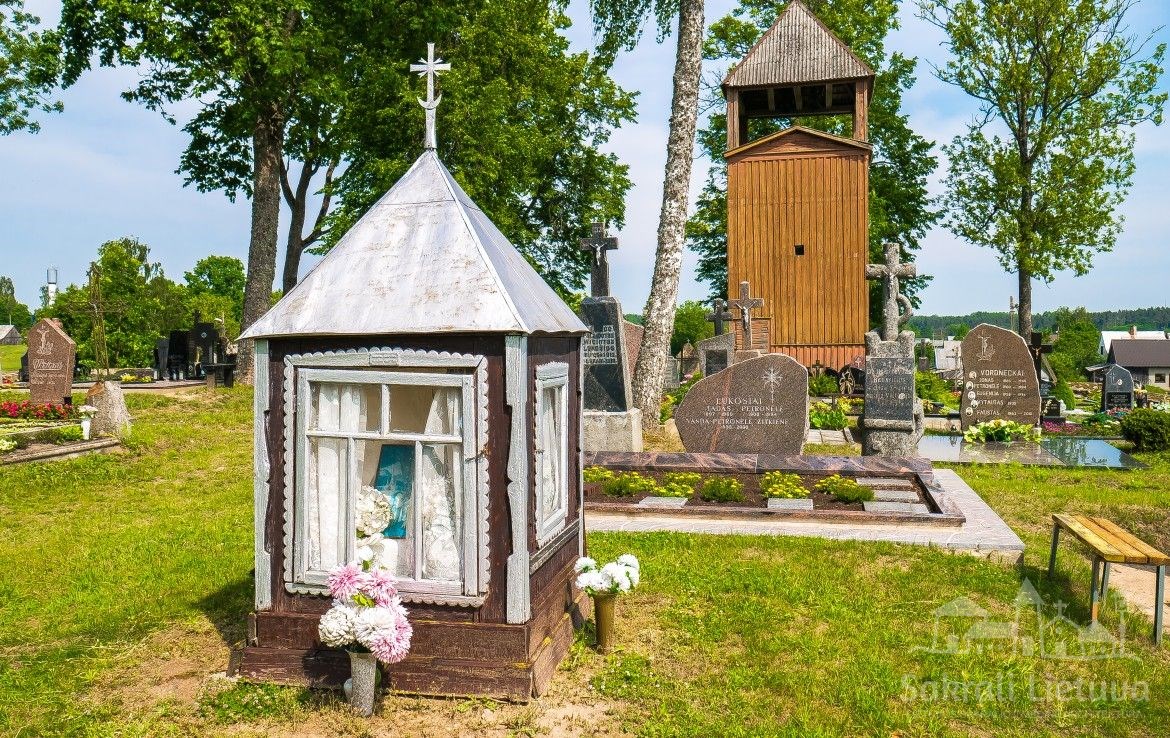 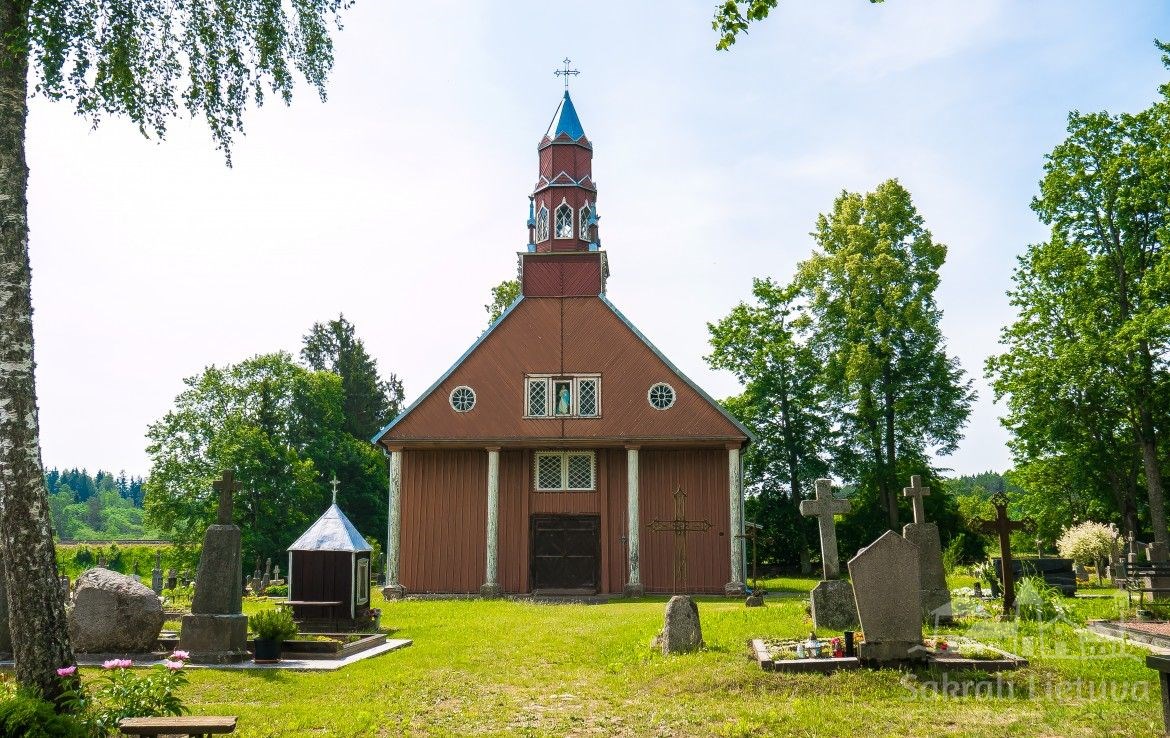 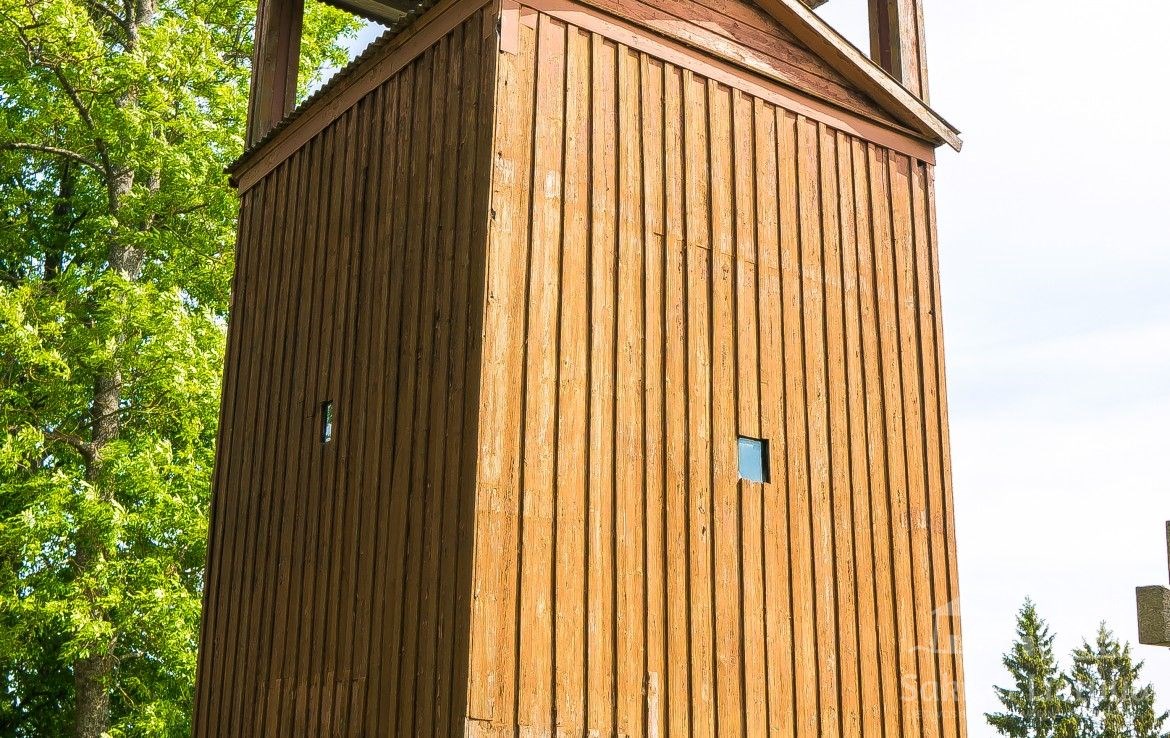 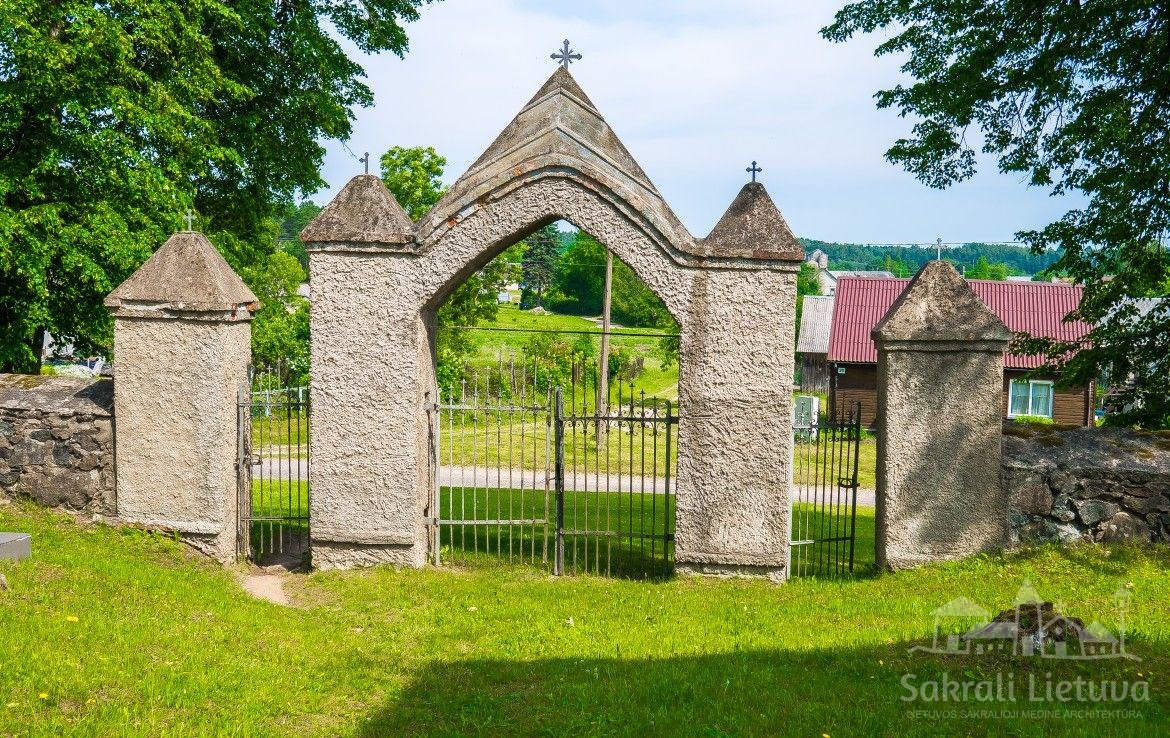 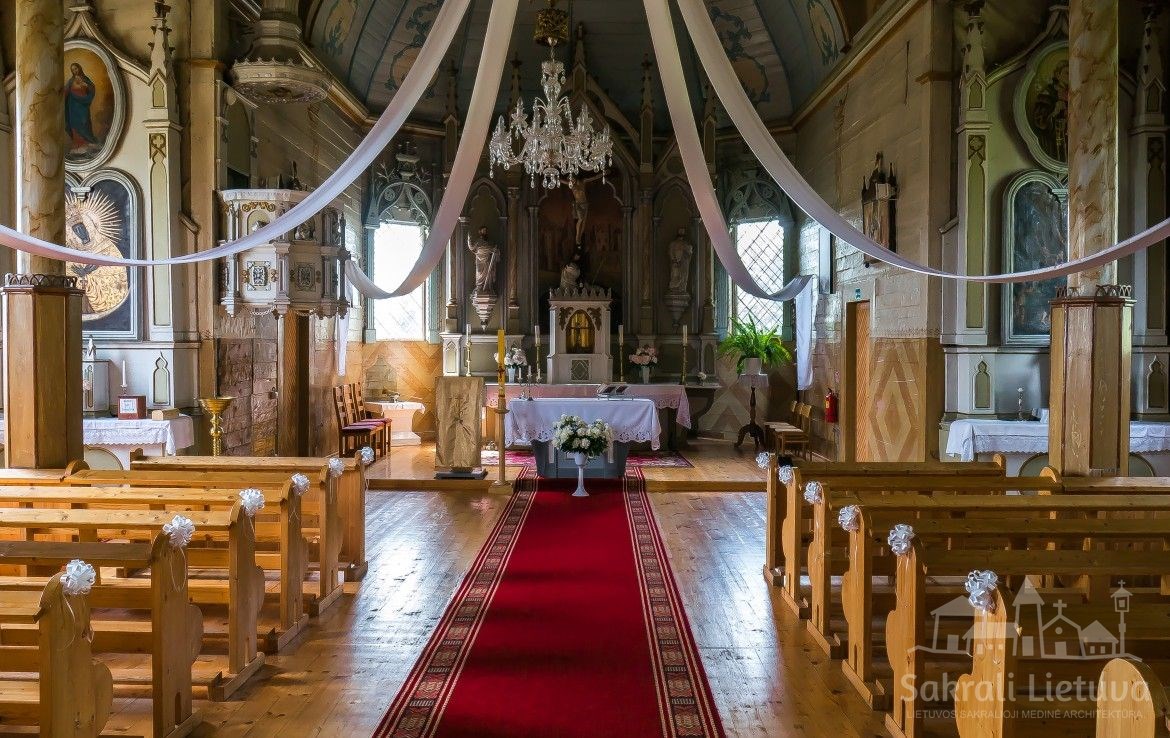 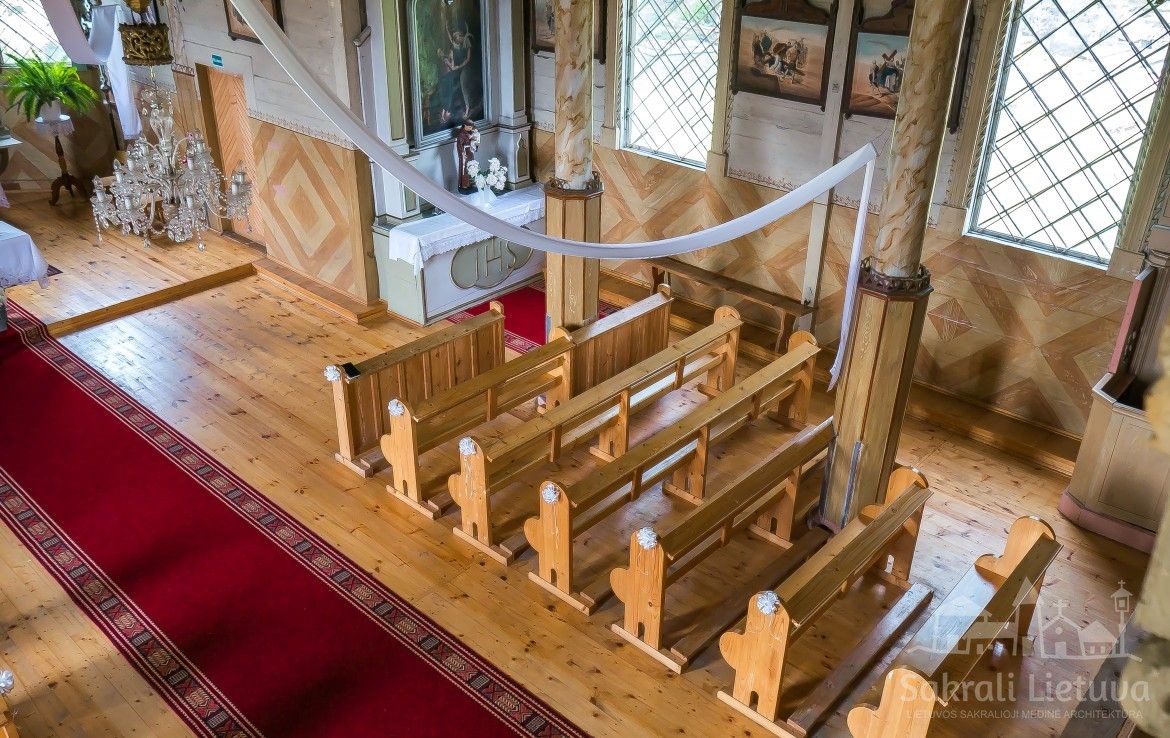 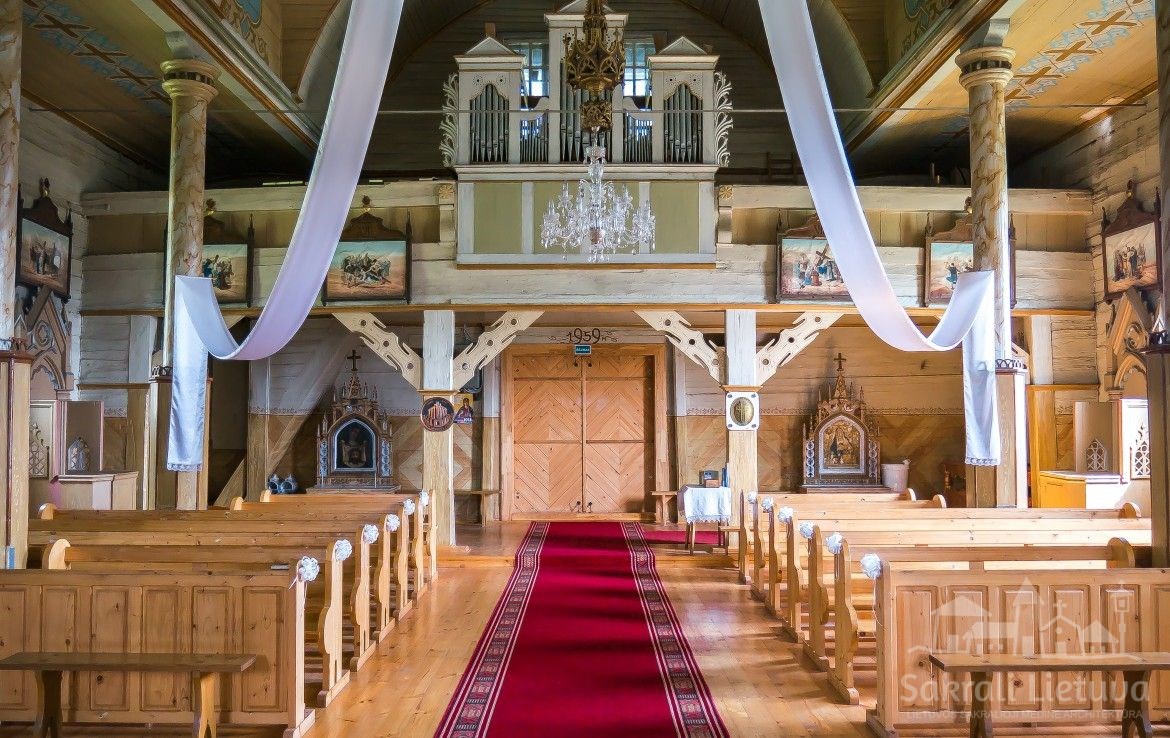 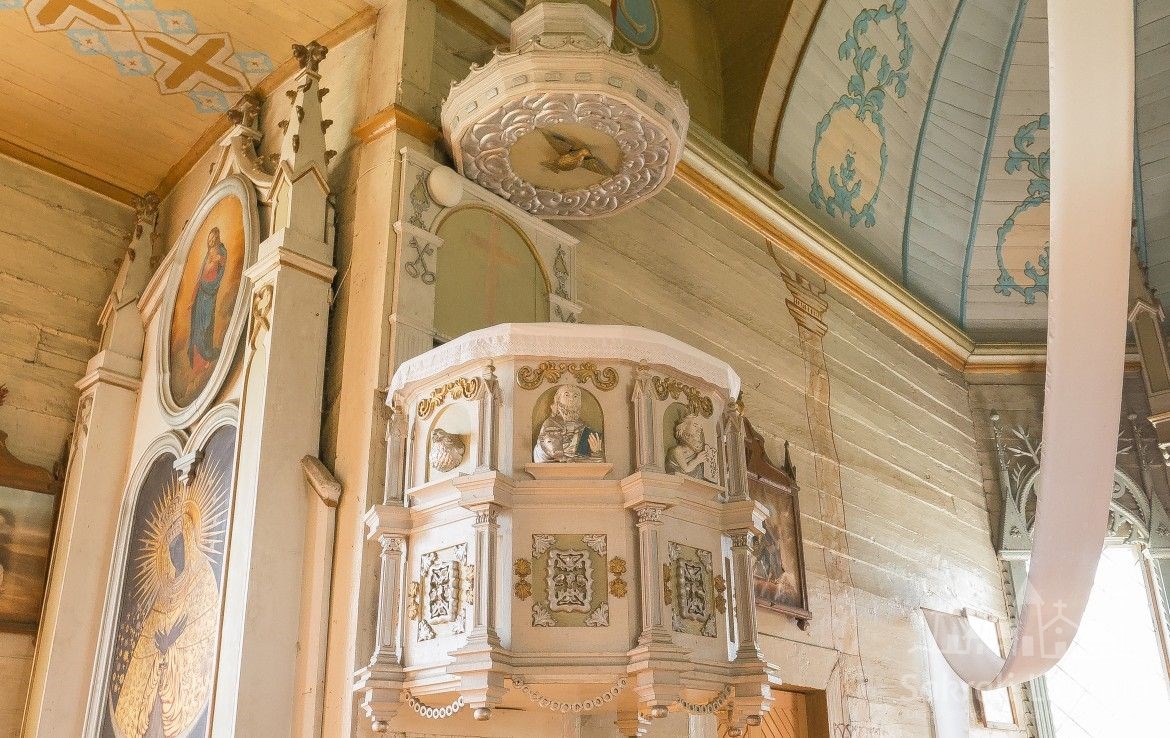 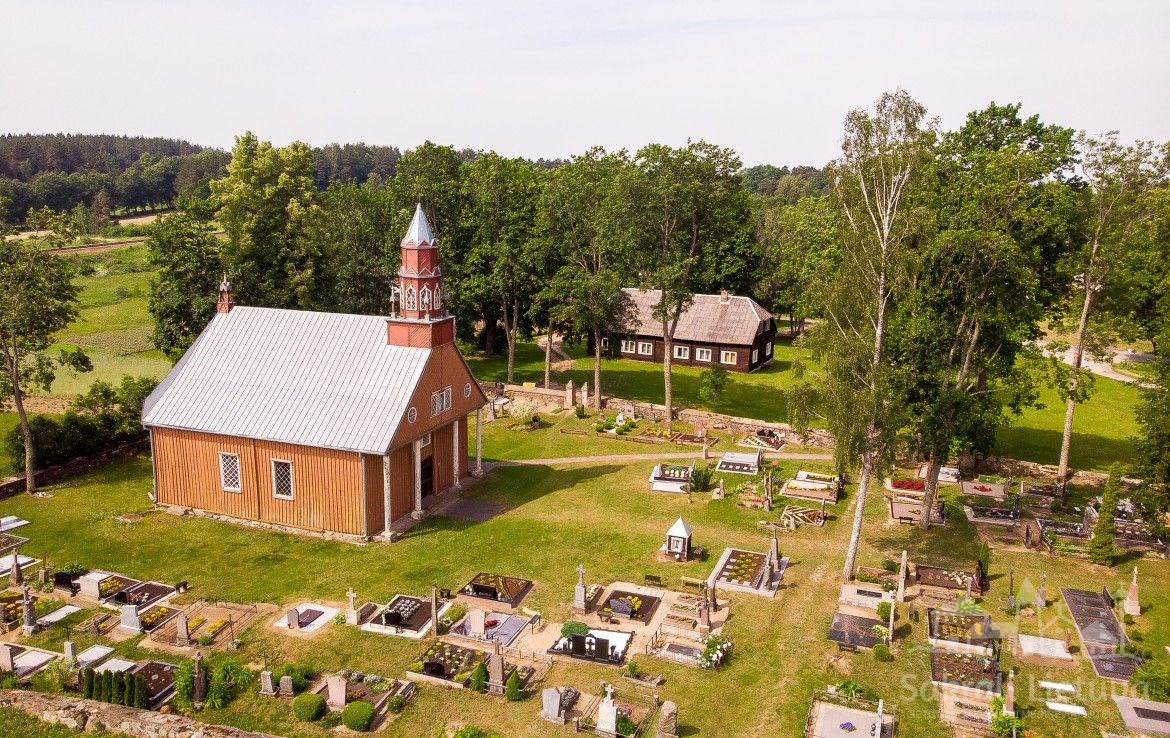 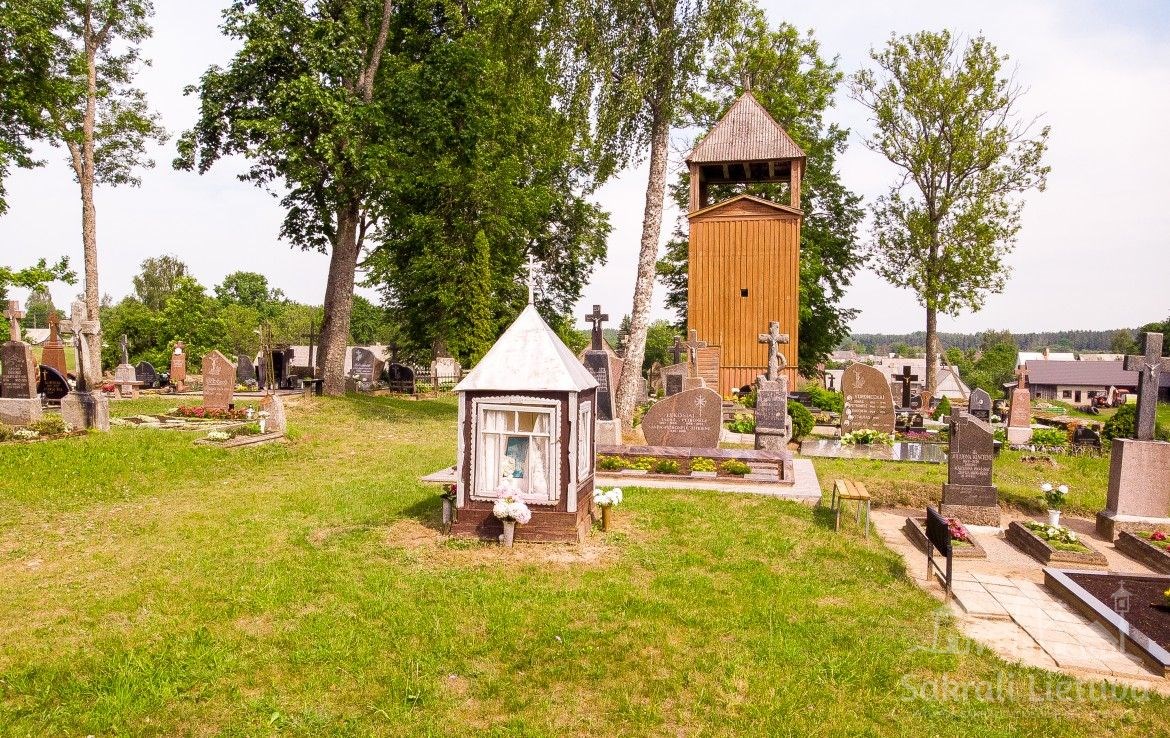 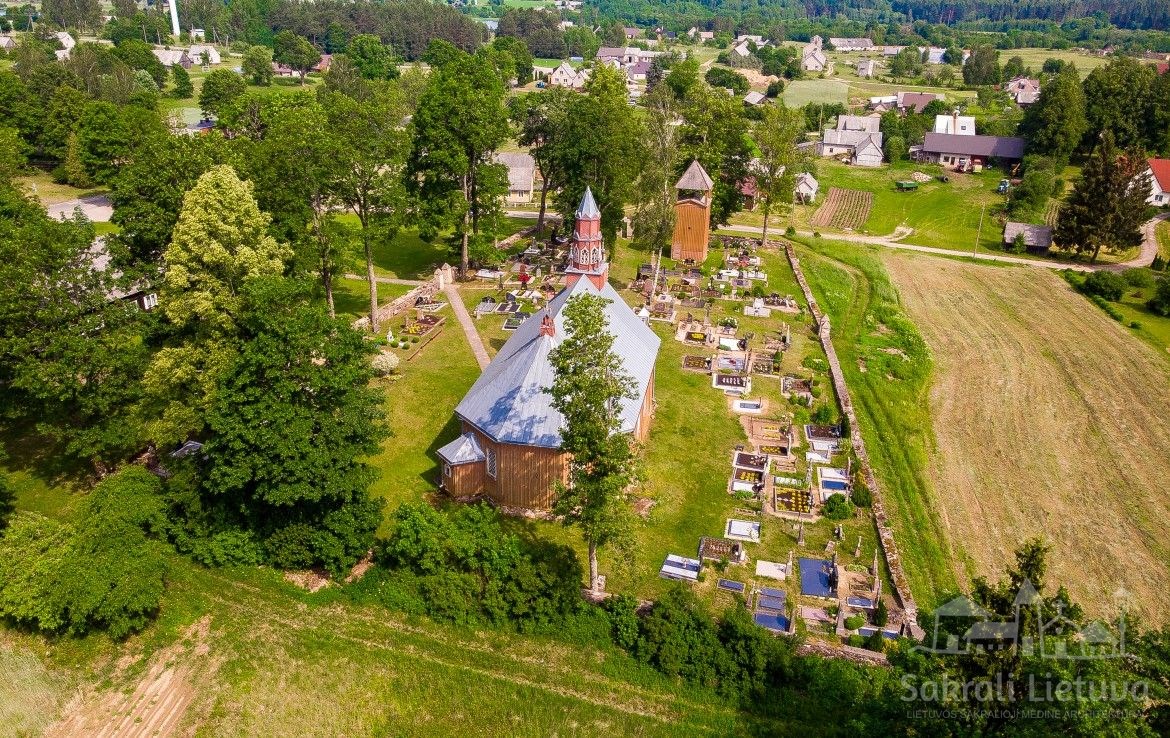 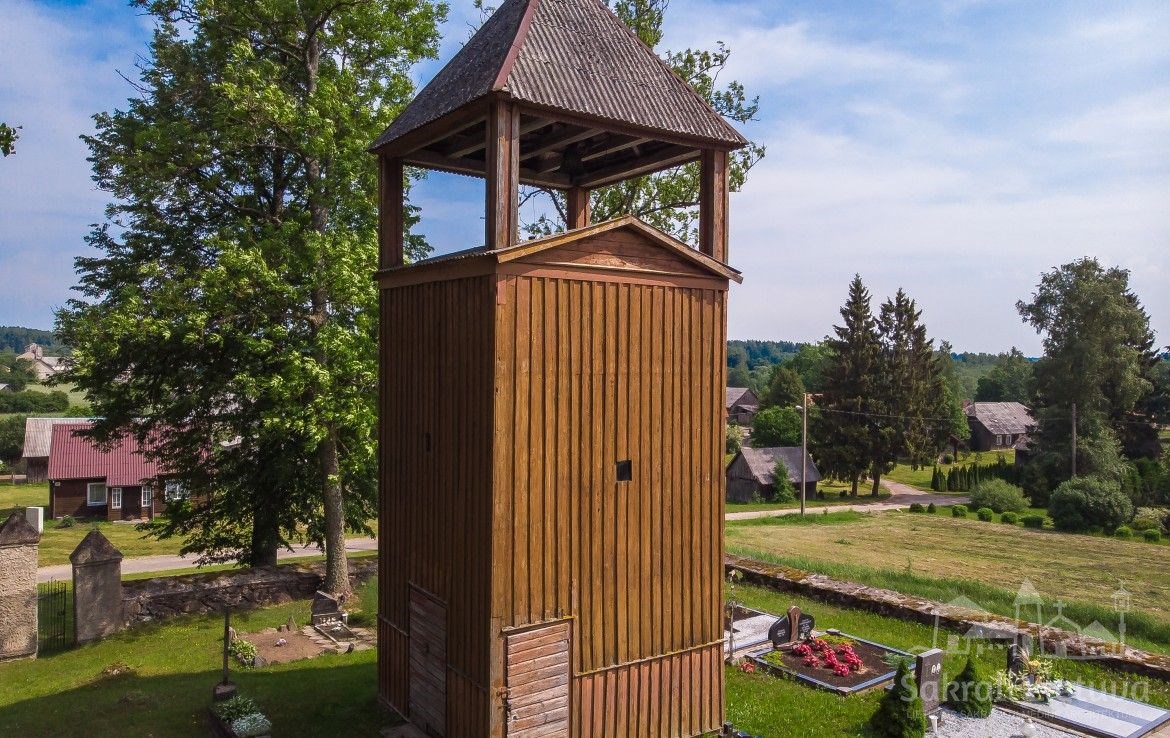 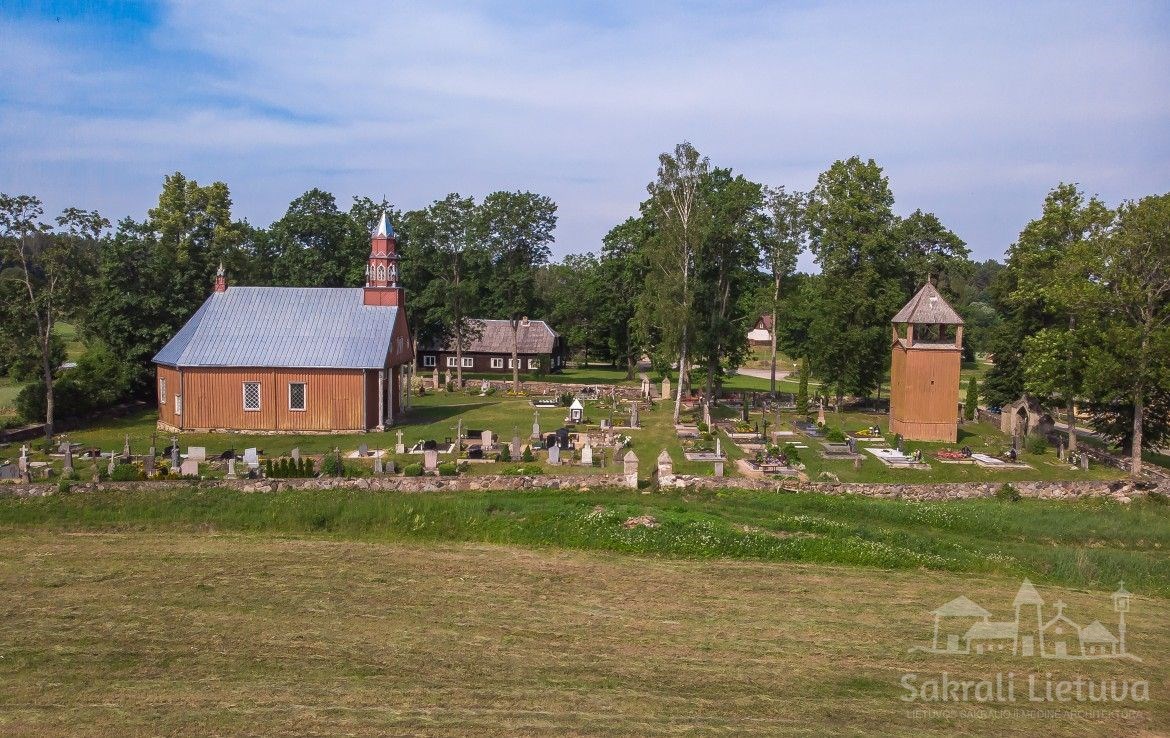 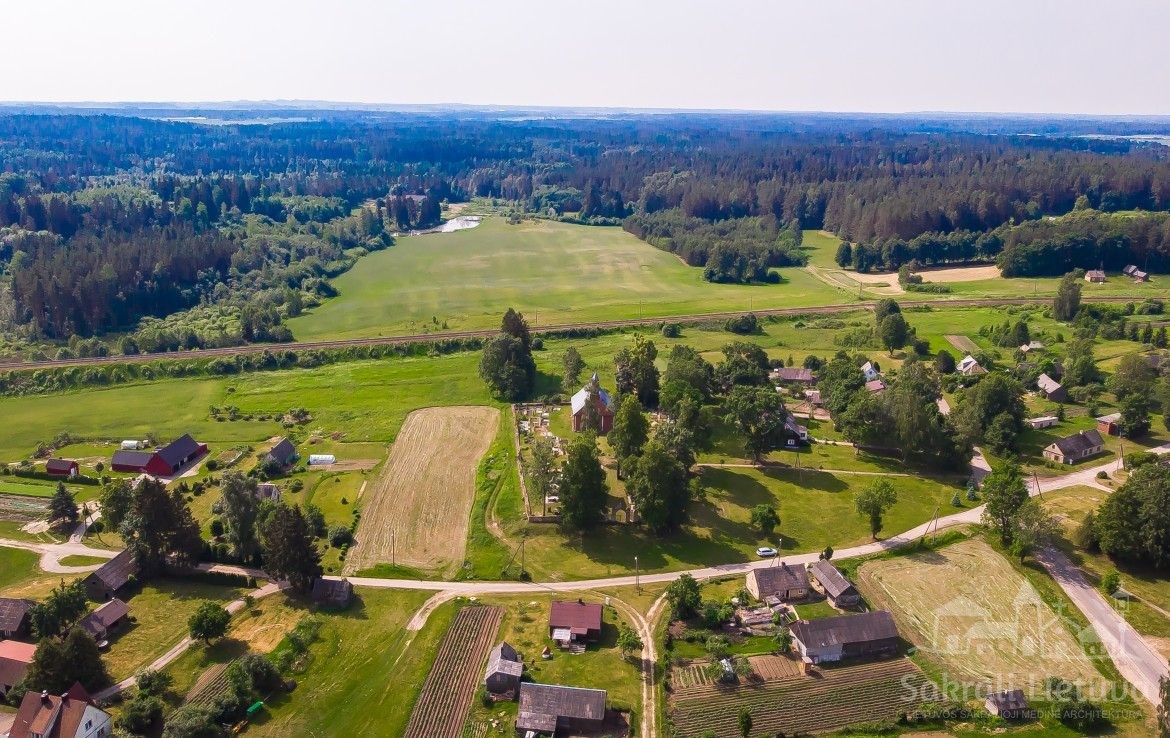