The owner of Švedriškės homestead Marija Leščiauskienė before her death gave as a present for church construction her homestead, land plot of 81.4 ha area and farm-buildings. A residential house was built, at one end of which, a chapel was equipped. Sometimes a priest from Salakas came to celebrate a Holy Mass. Eventually, in 1929, the priest Jonas Gurauskas was appointed and a temporary church built, which stood until the present wooden church, titled Švedriškės Church of St. John the Baptist, was built in 1933. This church was awarded the rights of a separate parish church. In 1960–1989, in Švedriškės, Antanas Juška, the former Siberia prisoner, served as the dean.

The church is built in Neo-Gothic style, its project authored by the engineer Stasys Taškūnas. This church is erected on a high stone foundation, has a rectangular plan, three naves, the presbytery, narrower and lower than the naves, the three-walled apse and both-sided sacristies, adjoining the presbytery. Two tall square towers rise from the sides of the front facade. The facades of the towers are divided decoratively by ledges, rectangular windows with decorative trimmings in the bottom tier, above it – circular windows, while on the upper tier of the towers – acoustic openings of the pointed arches. The summits of tall pyramid tower roofs are crowned with lanterns, adorned with helmets and crosses. On the edge of the nave, at the presbytery – a small square turret with narrow openings and hip roof canopy with a cross sits. The church roofs are tin-plated; the roof of the main volume and that of the presbytery are double pitch type, while those of the apse and sacristies – three pitch ones. The door of the main facade is a two-leaf one with trimmings, the top part of which has carvings of wavy motif with small crosses. The same pattern of the decor adapted to the trimmings of the church’s windows. The windows of the church distinguish with particularly fine division of panes into small squares. Above the door, a wide window is set up to illuminate the space of the chorus. Above it, the date of church’s completion is inscribed – 1933. The central part of the facade ends with a triangular pediment having a circular fanlight and ornamented cross, sitting on the edge of the pediment. The entire inside of the church is planked with horizontal small boards.

Neo-Gothic dominates inside the church too. Three wooden Neo-Gothic altars adorned with sculptures match the planked interior. Four square towers divide the internal space into three naves. The higher ceiling of the central nave is trapezoid-shaped, while those of the side naves have plane surface.

The churchyard is fenced with a low metal fence, interspersed with reinforced concrete poles. Next to the church, a churchyard cemetery is established. 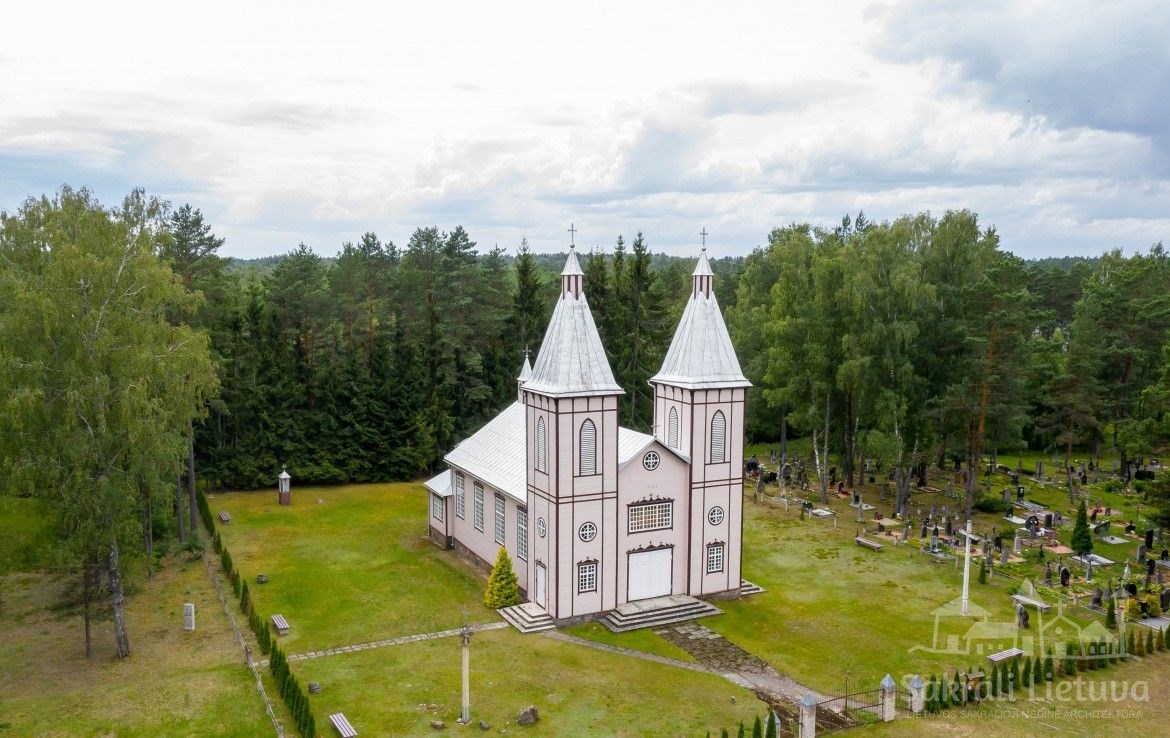 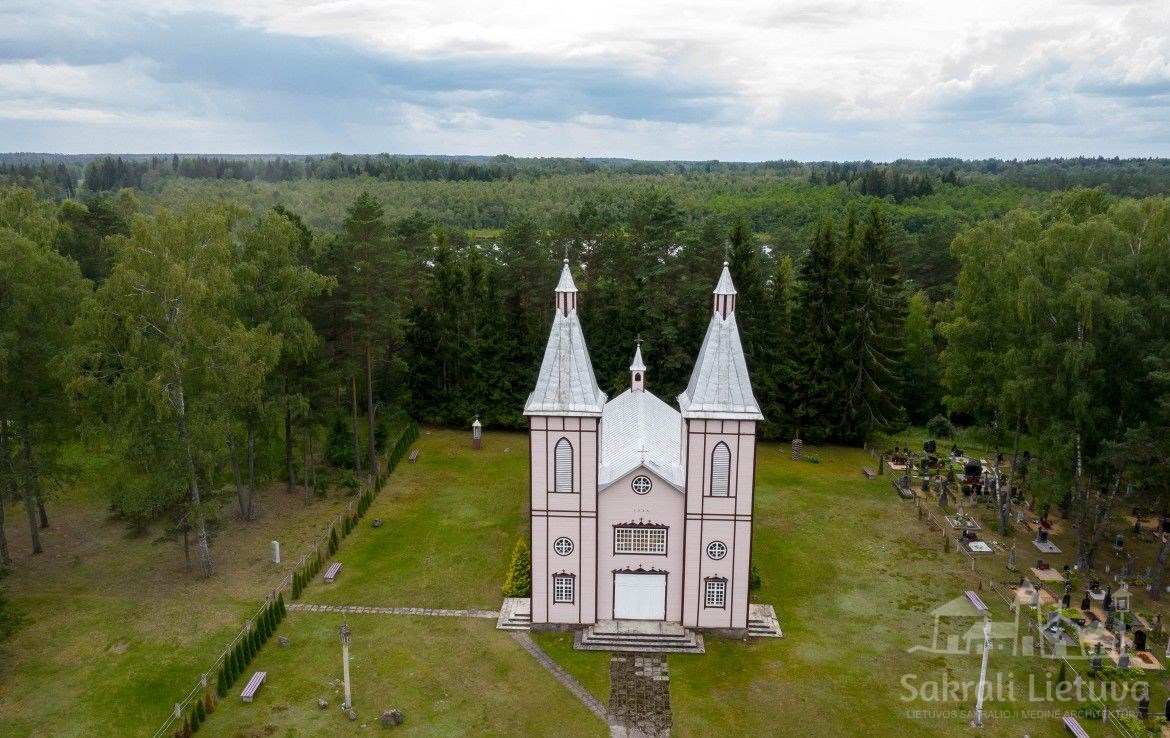 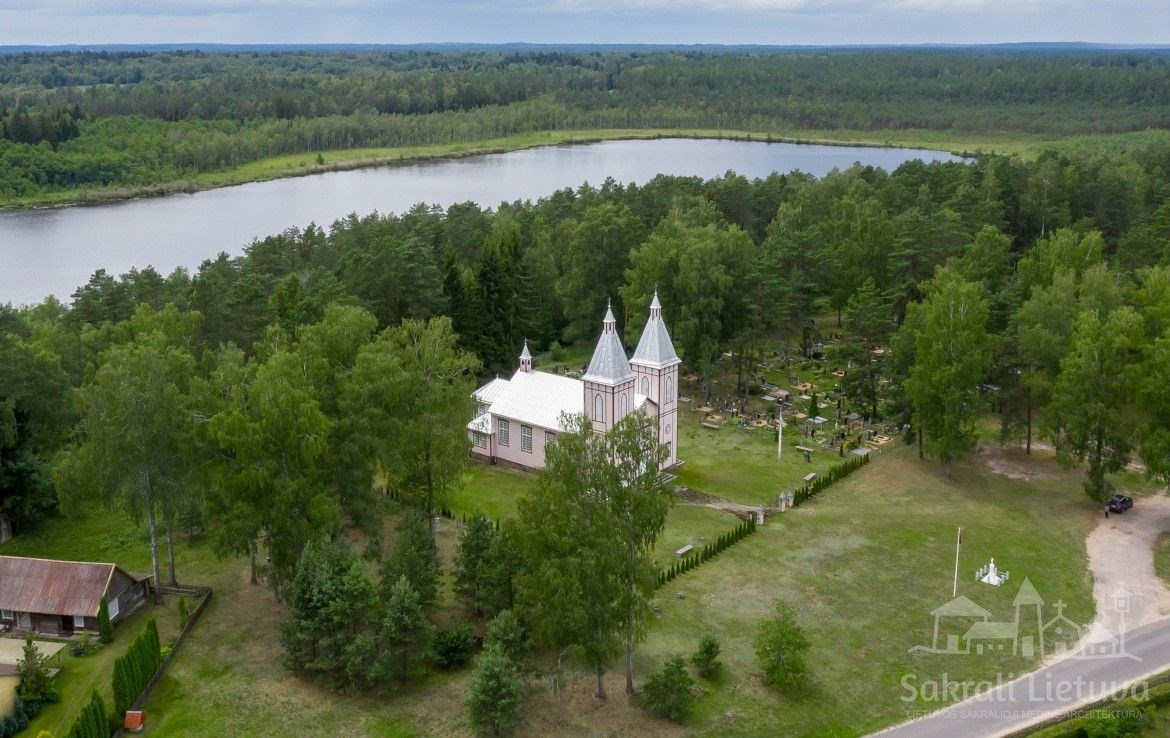 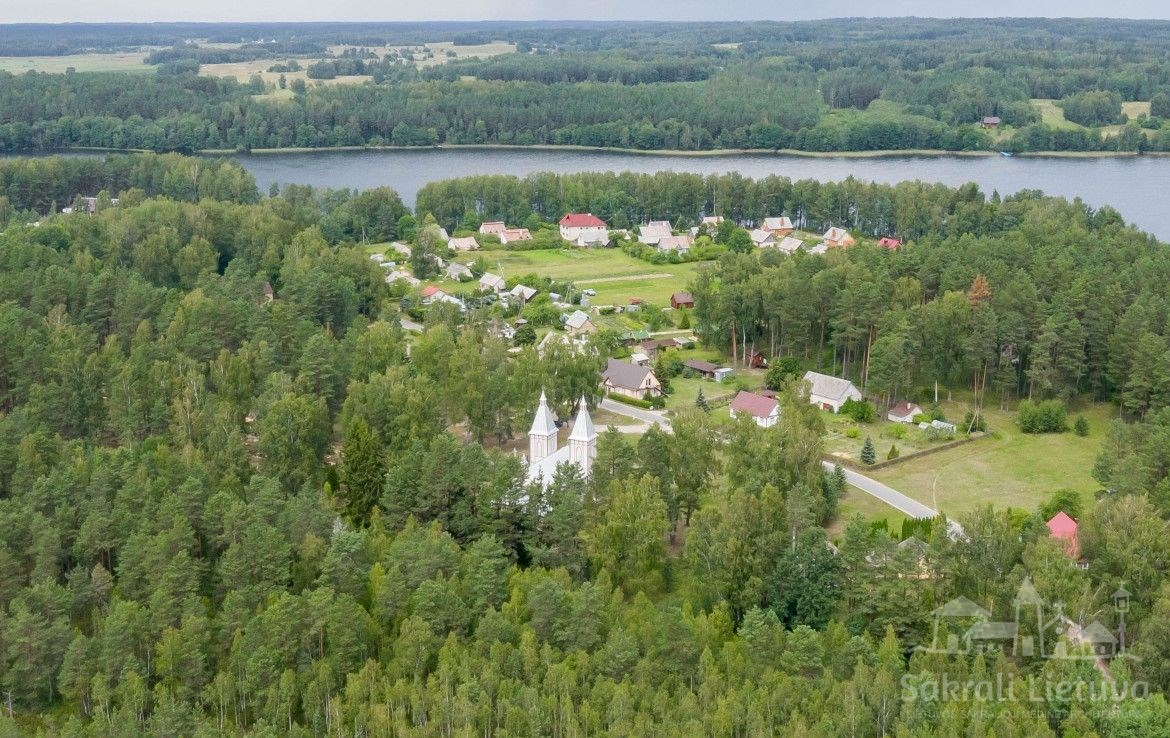 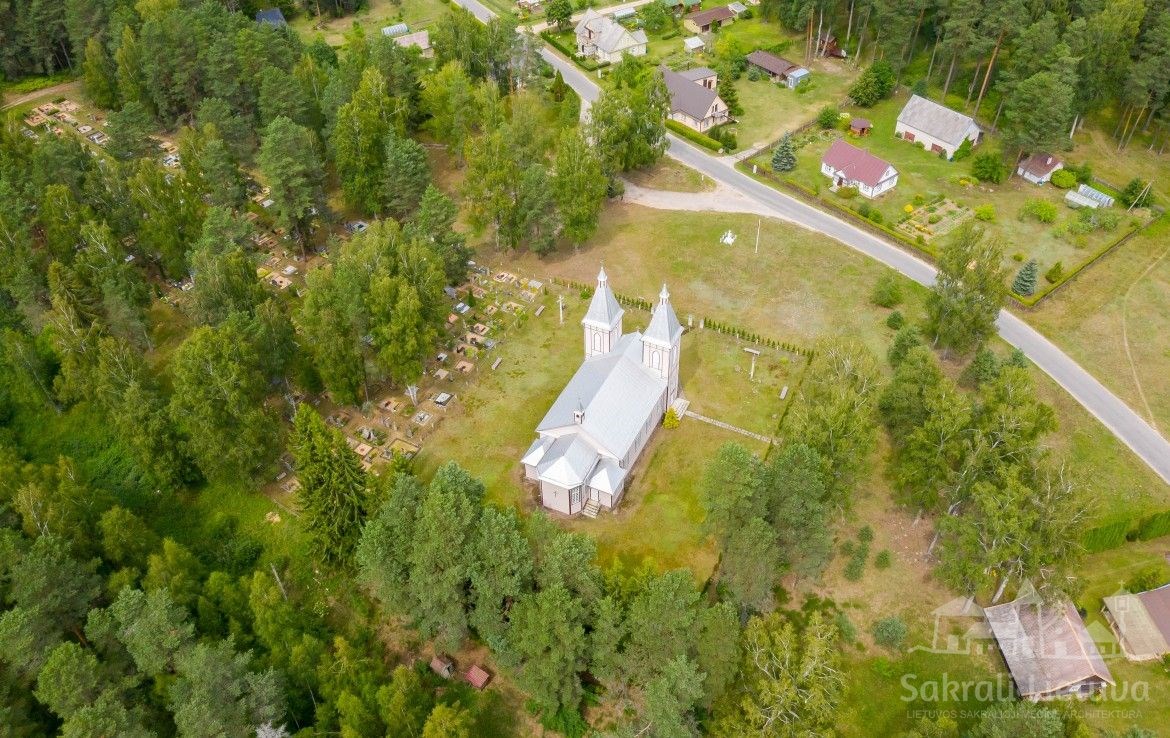 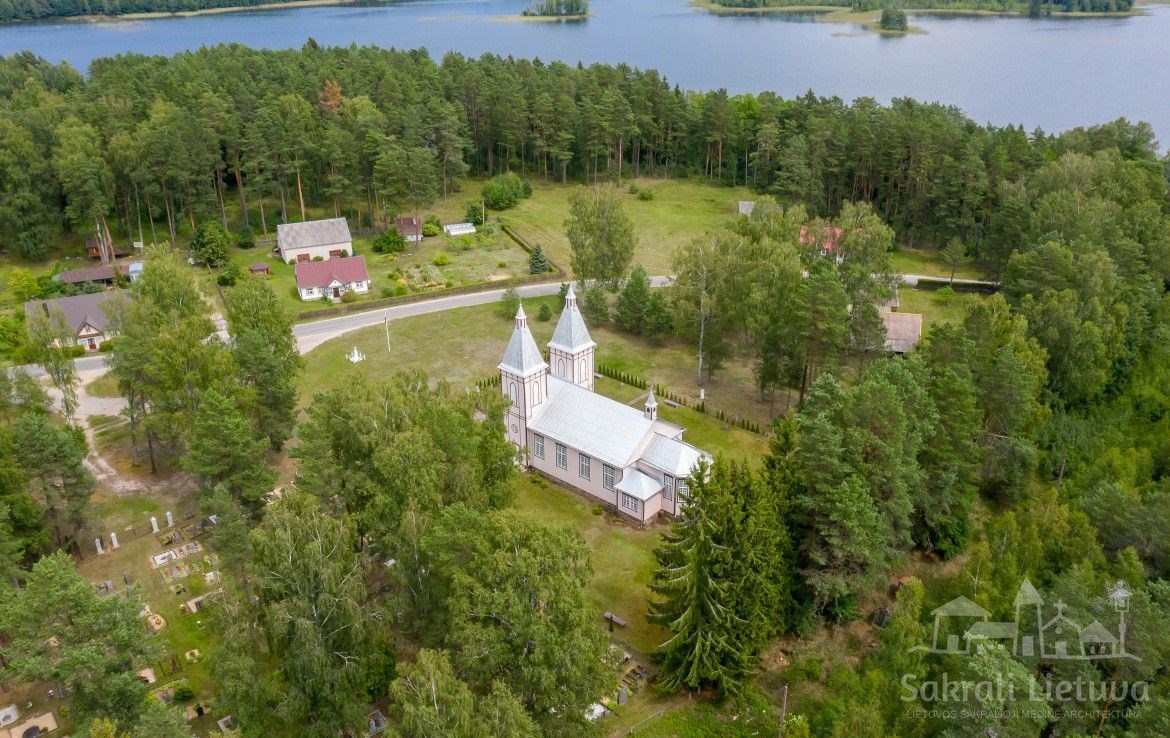 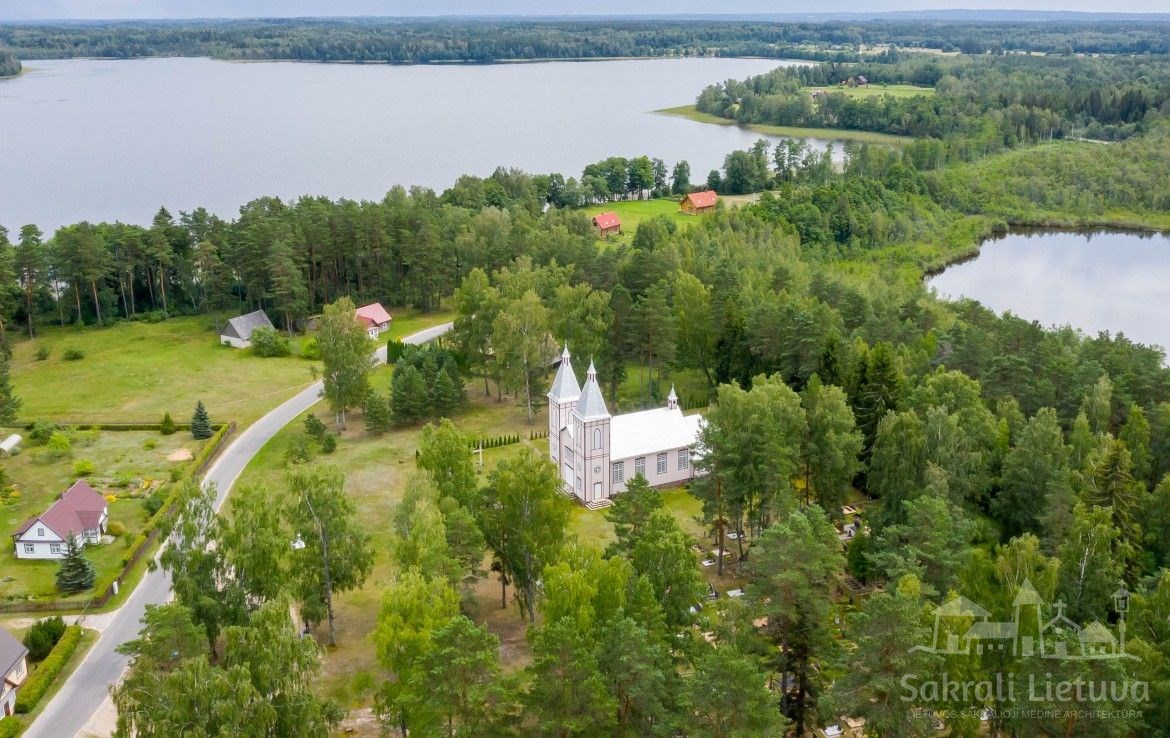 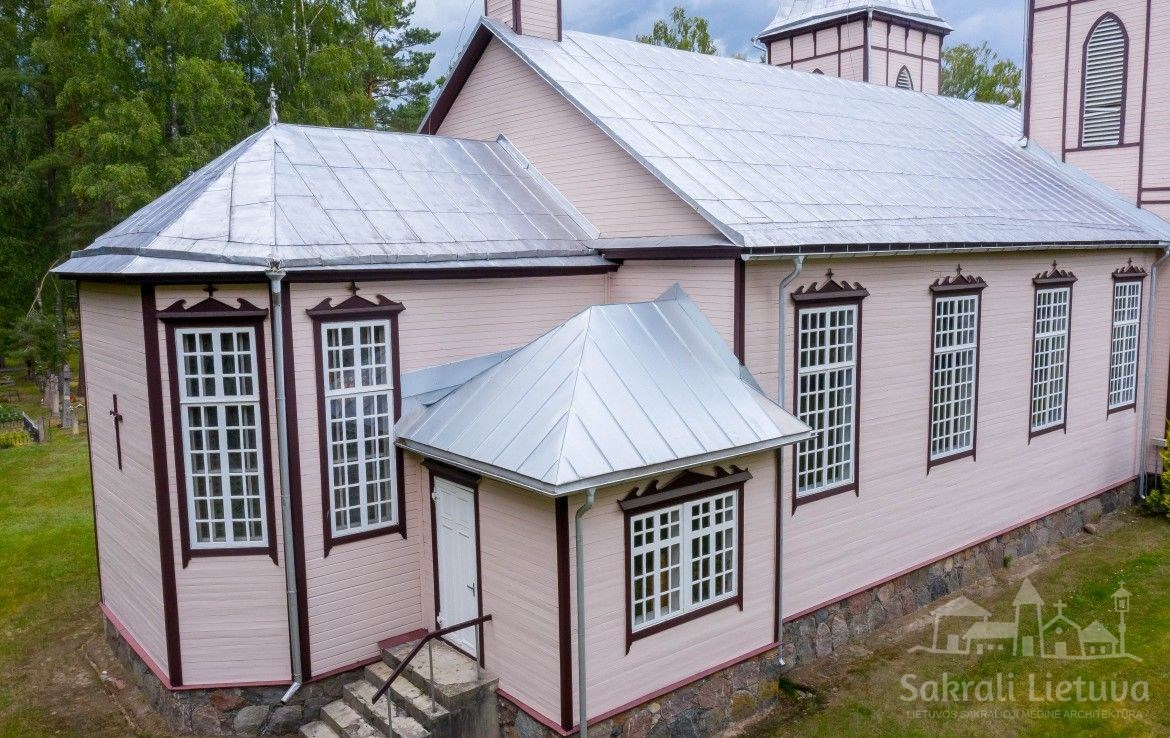 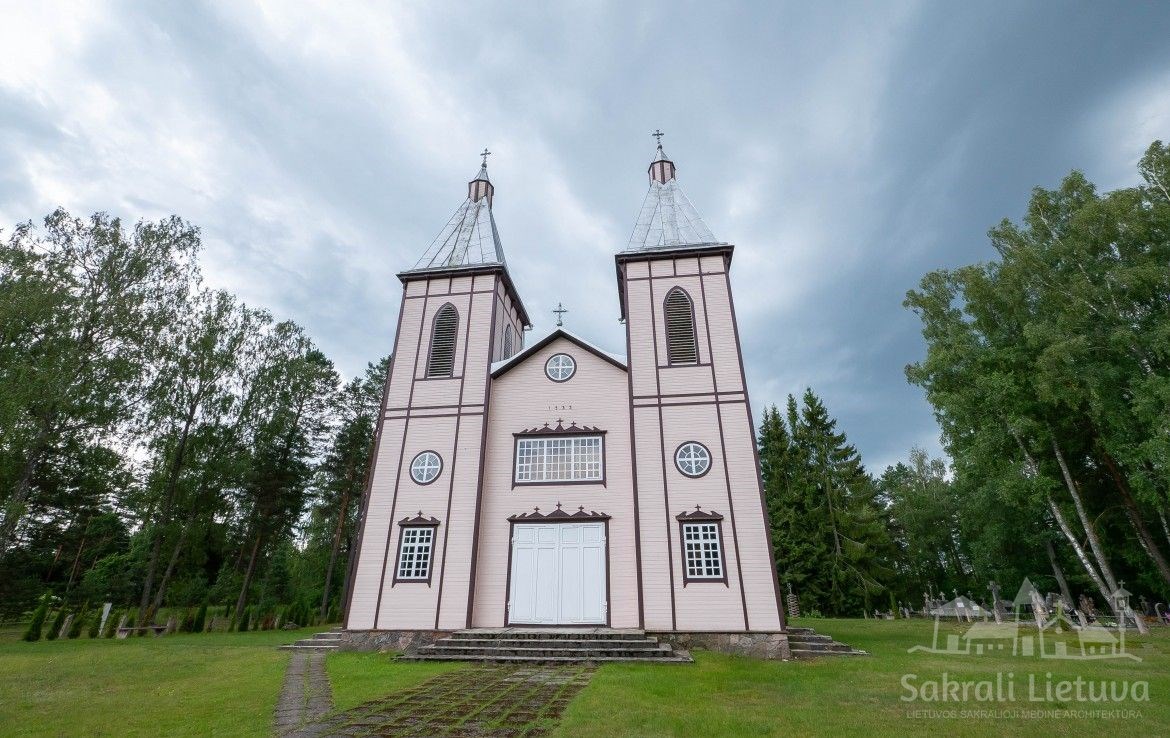 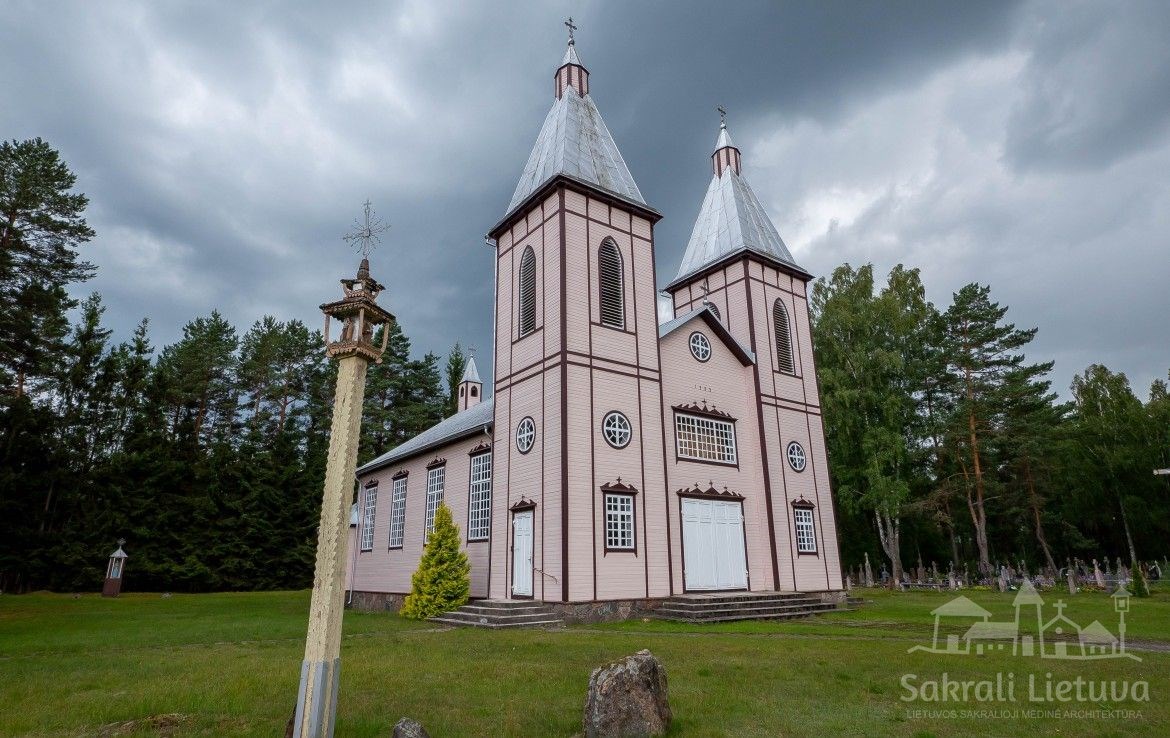 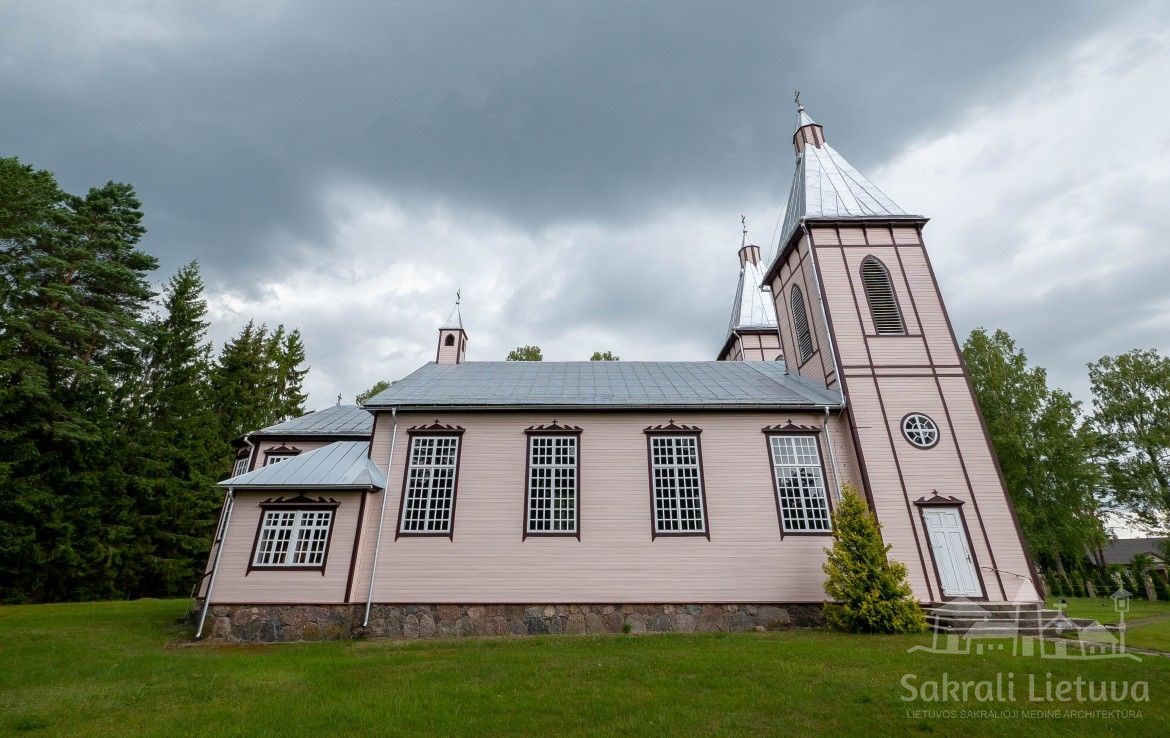 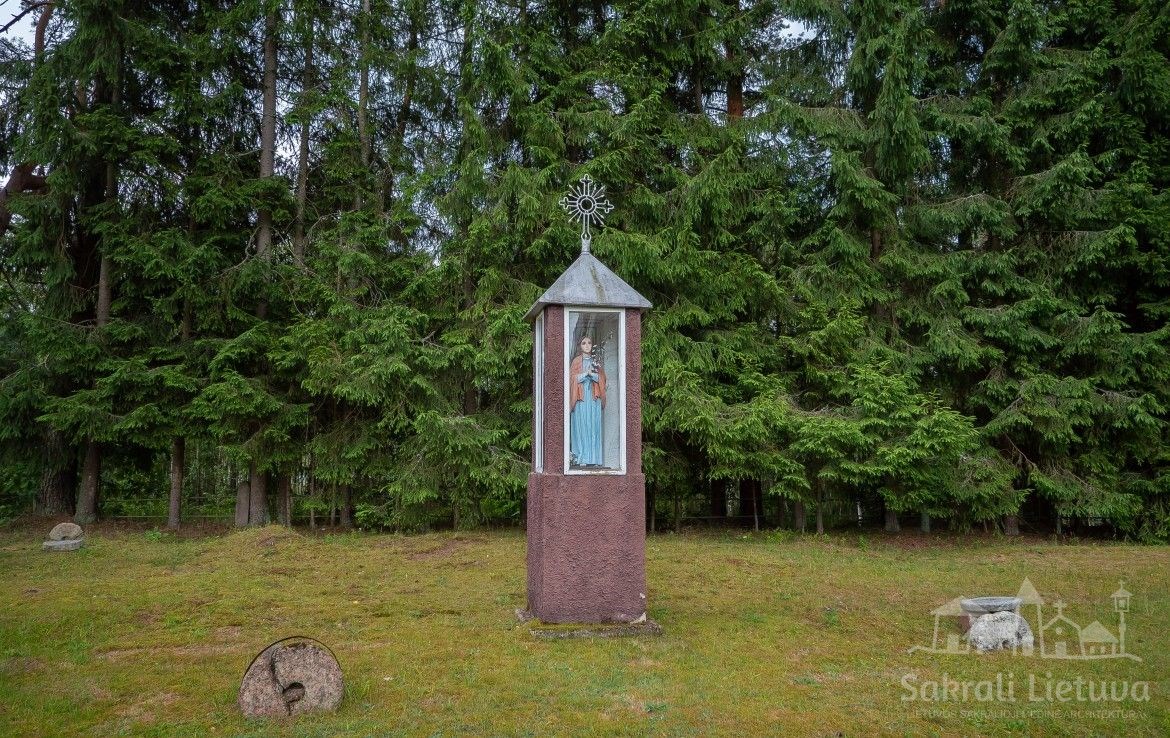 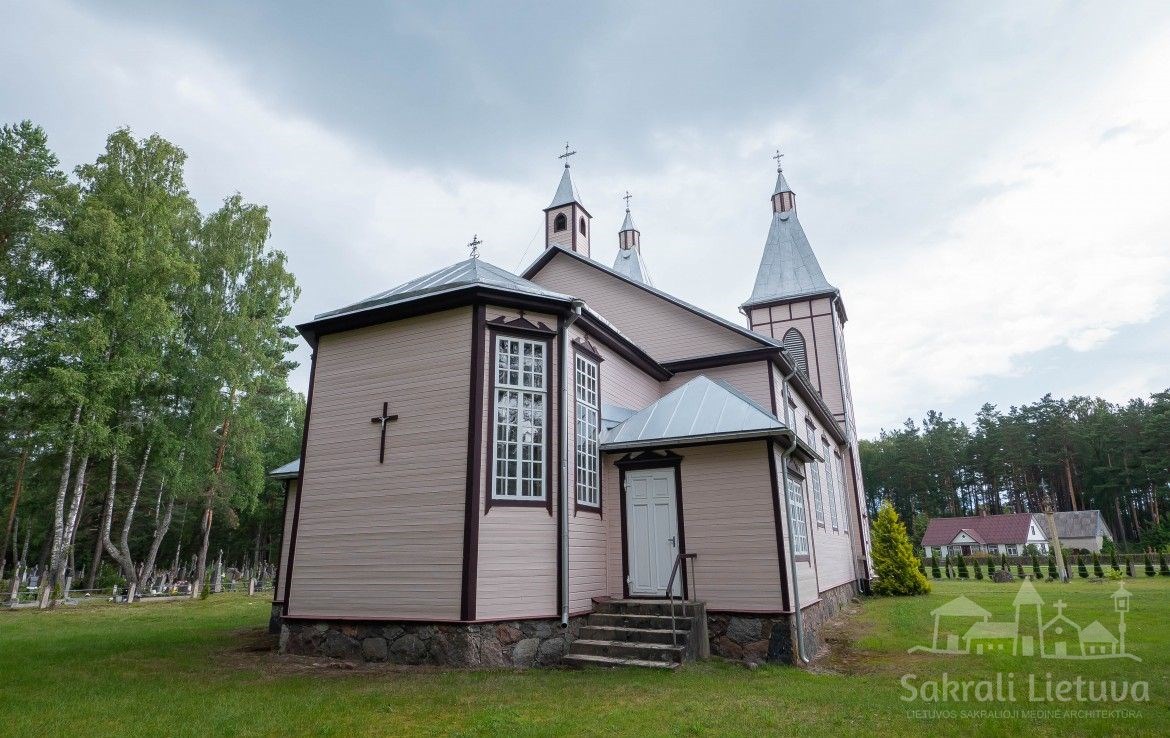 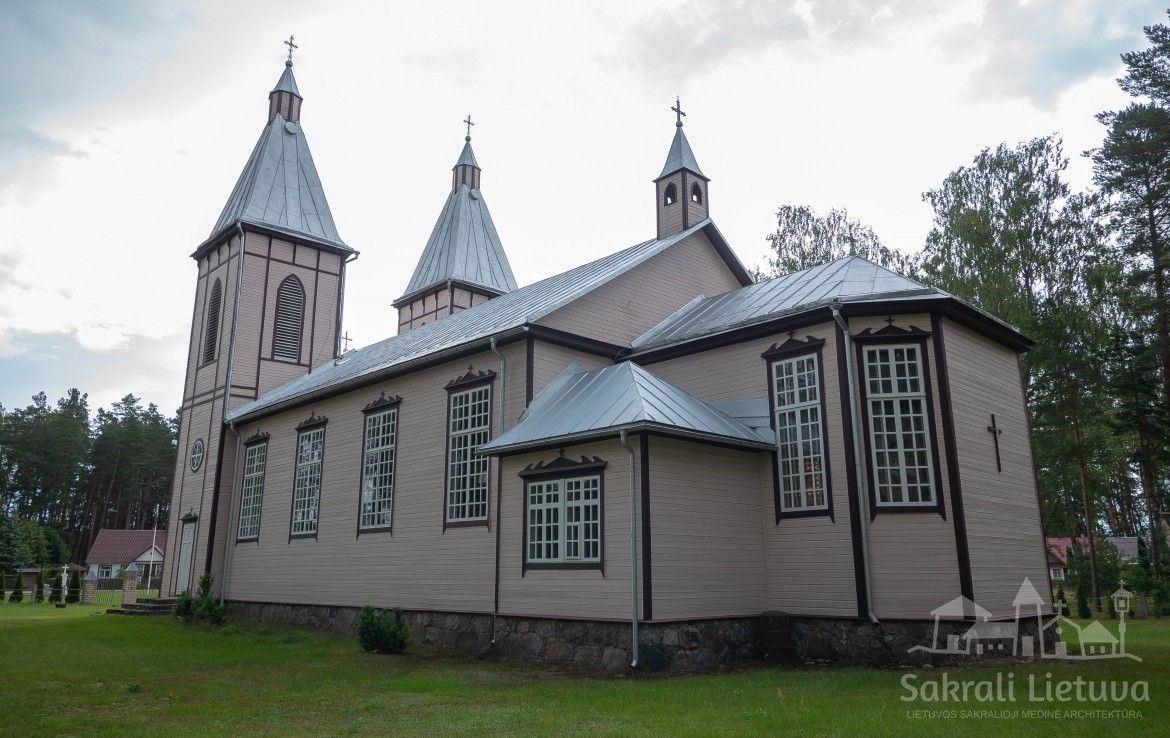 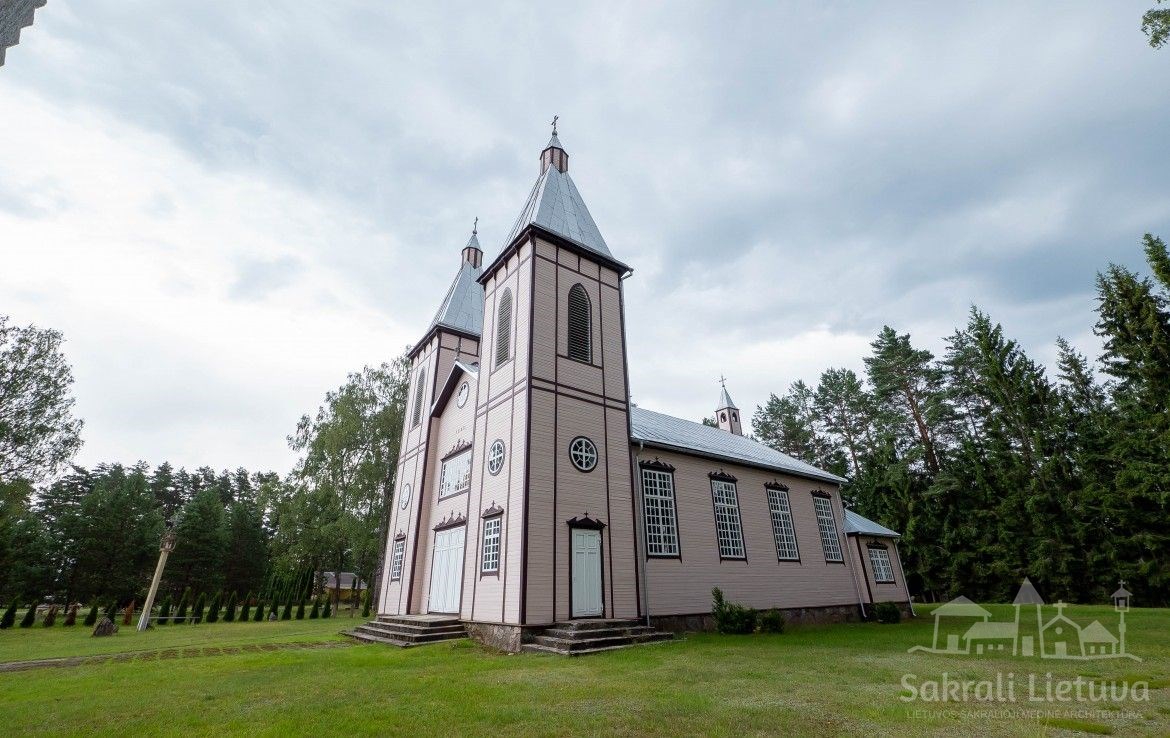 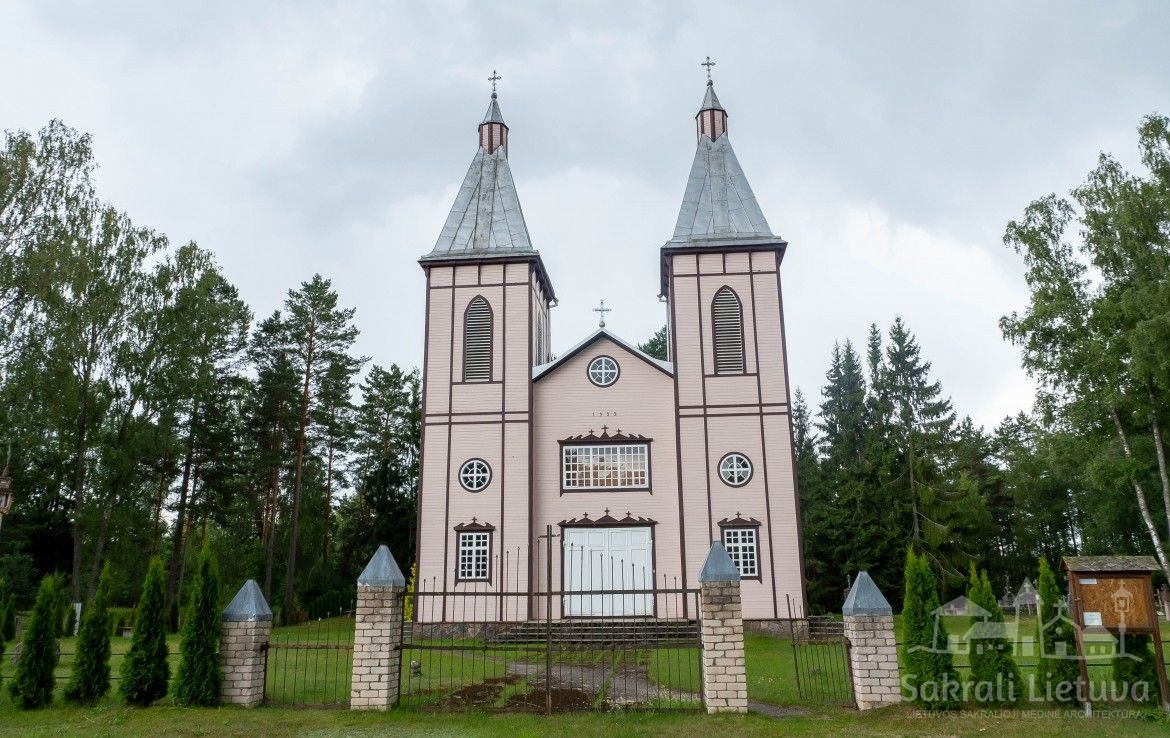 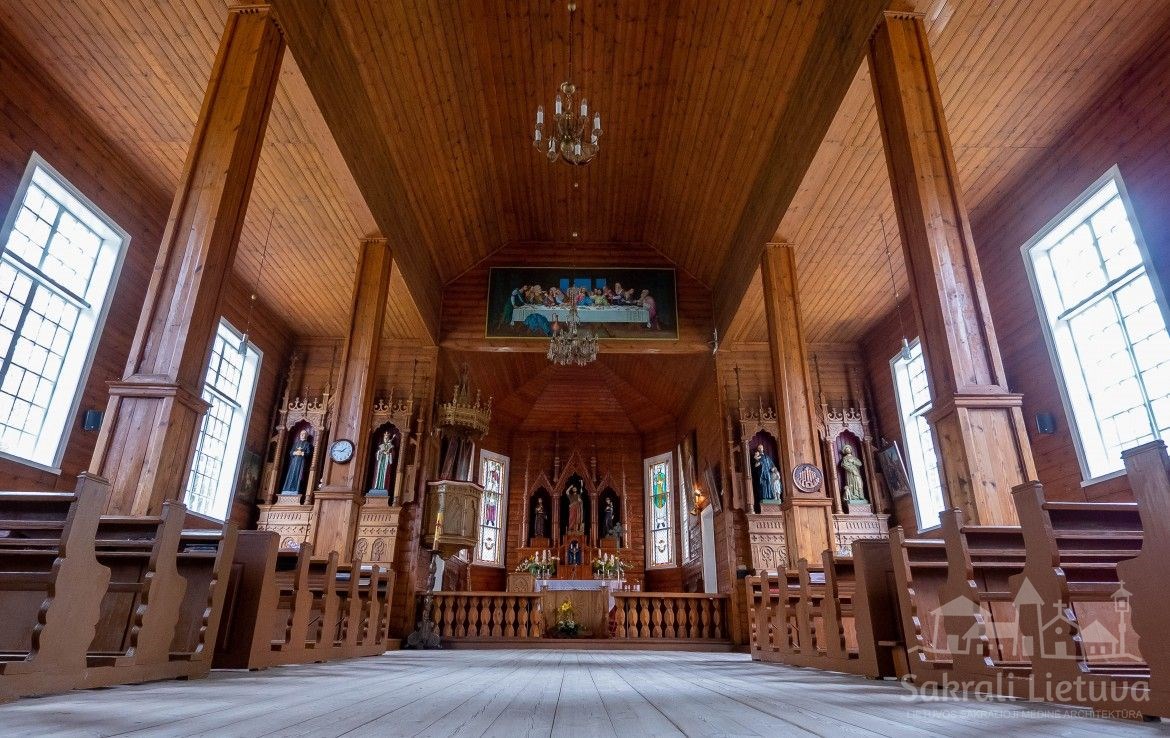 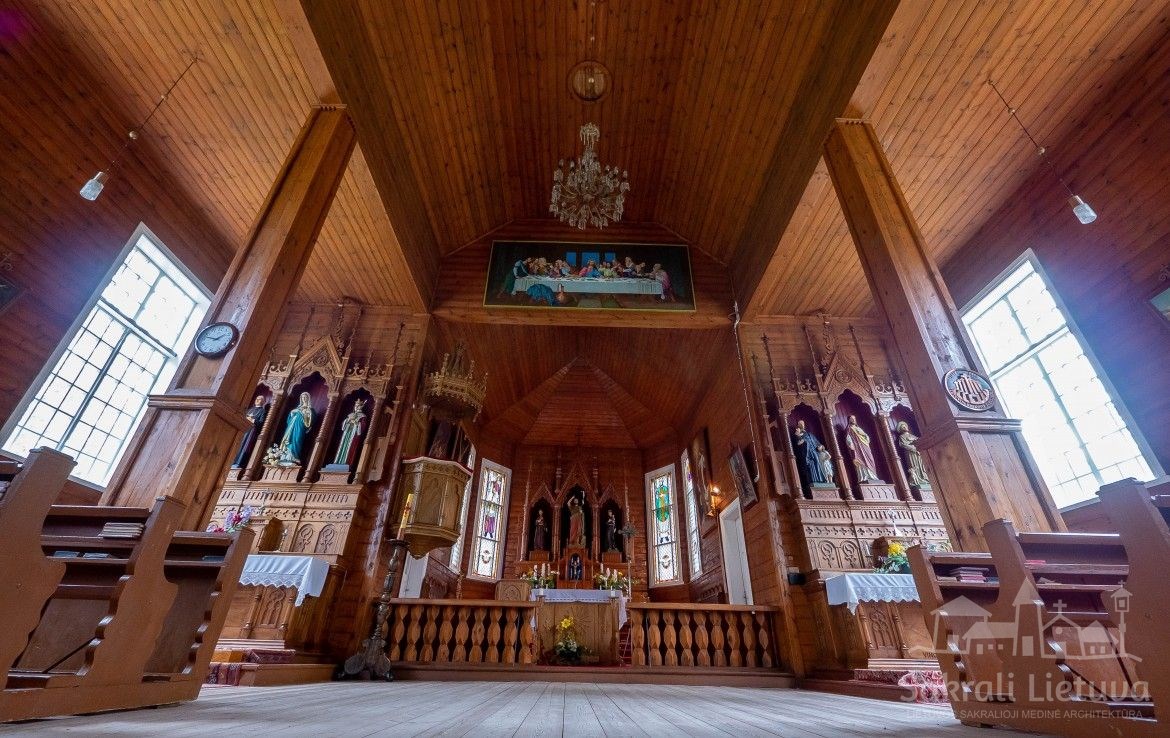 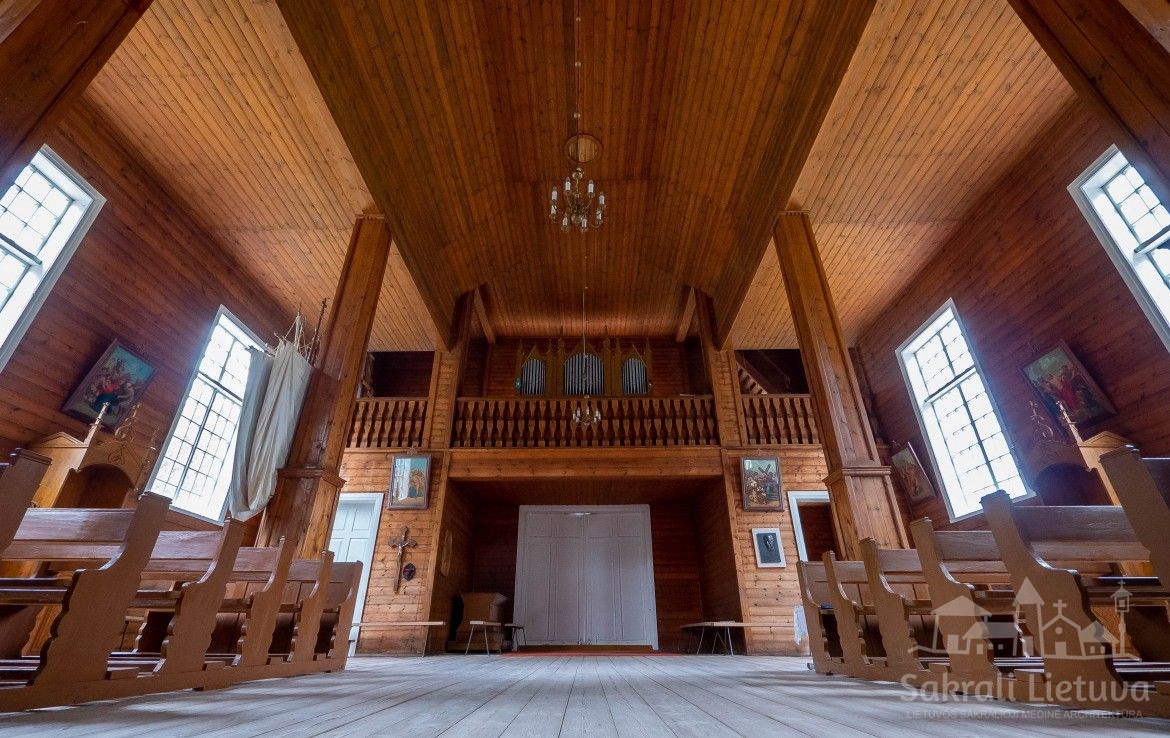 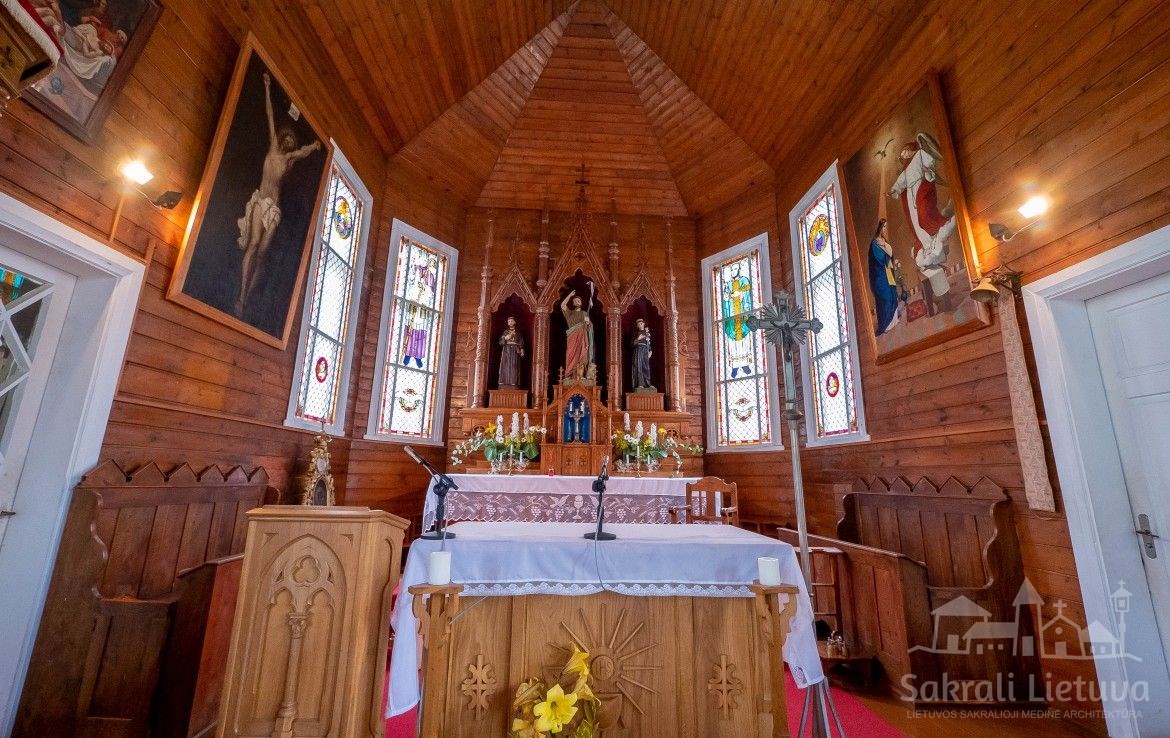 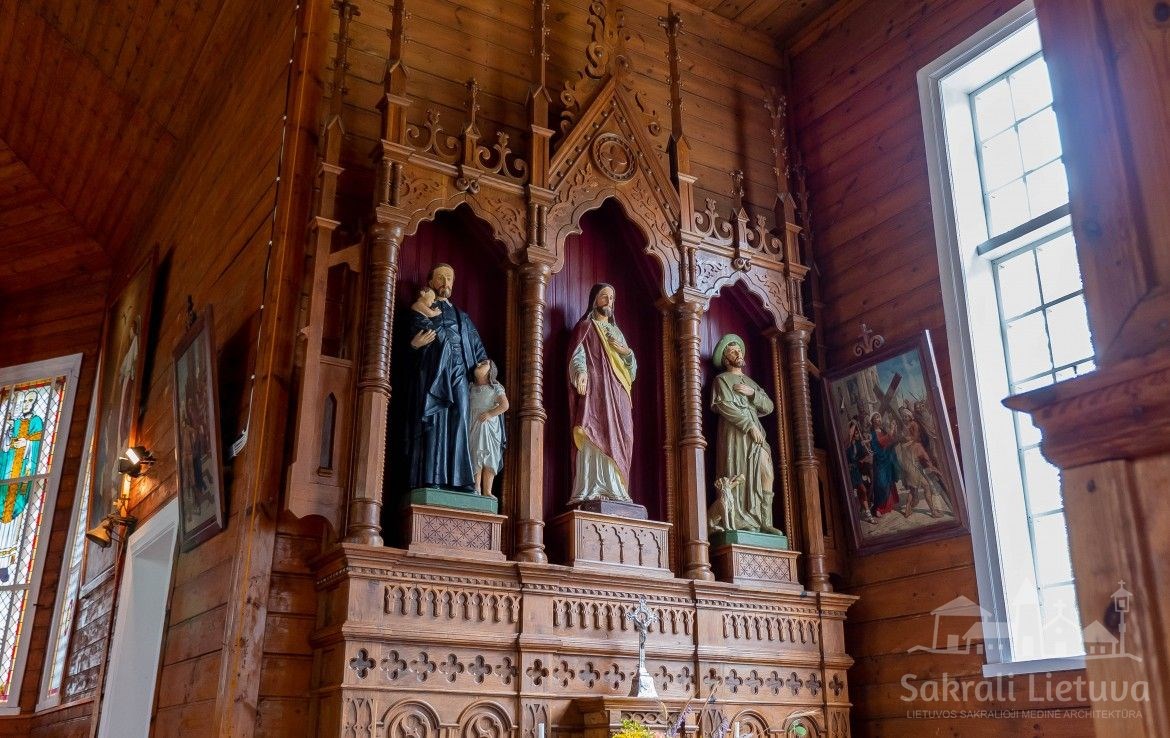 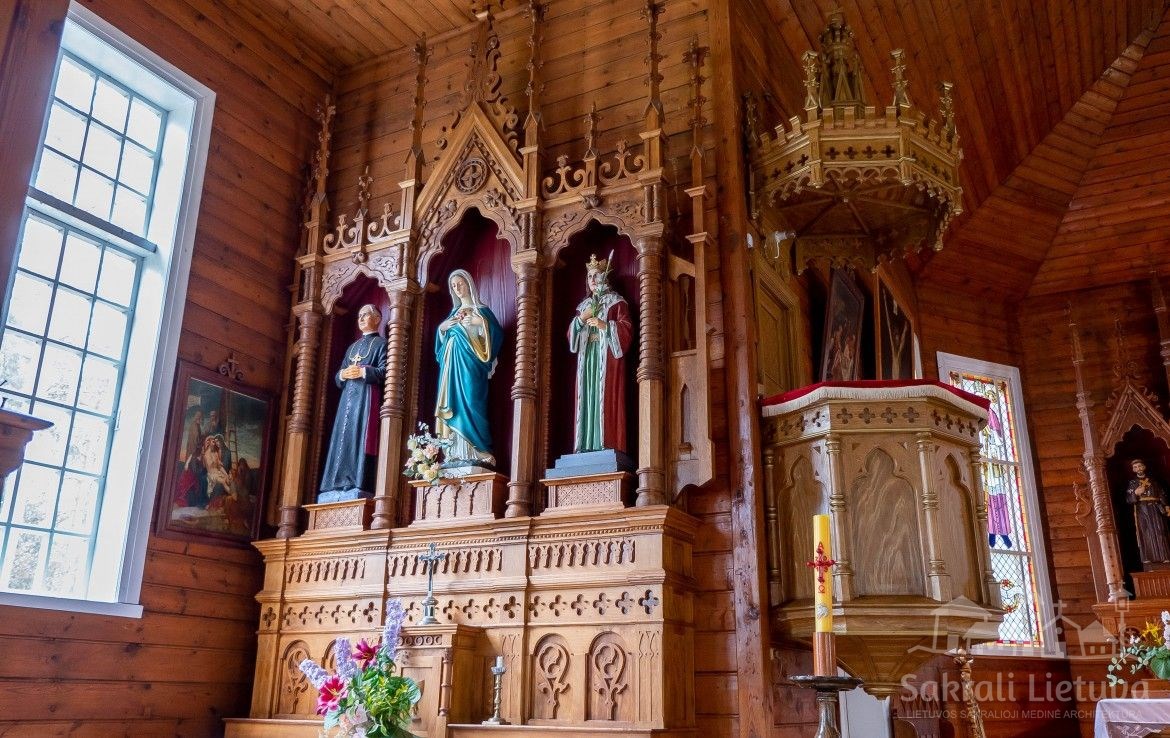 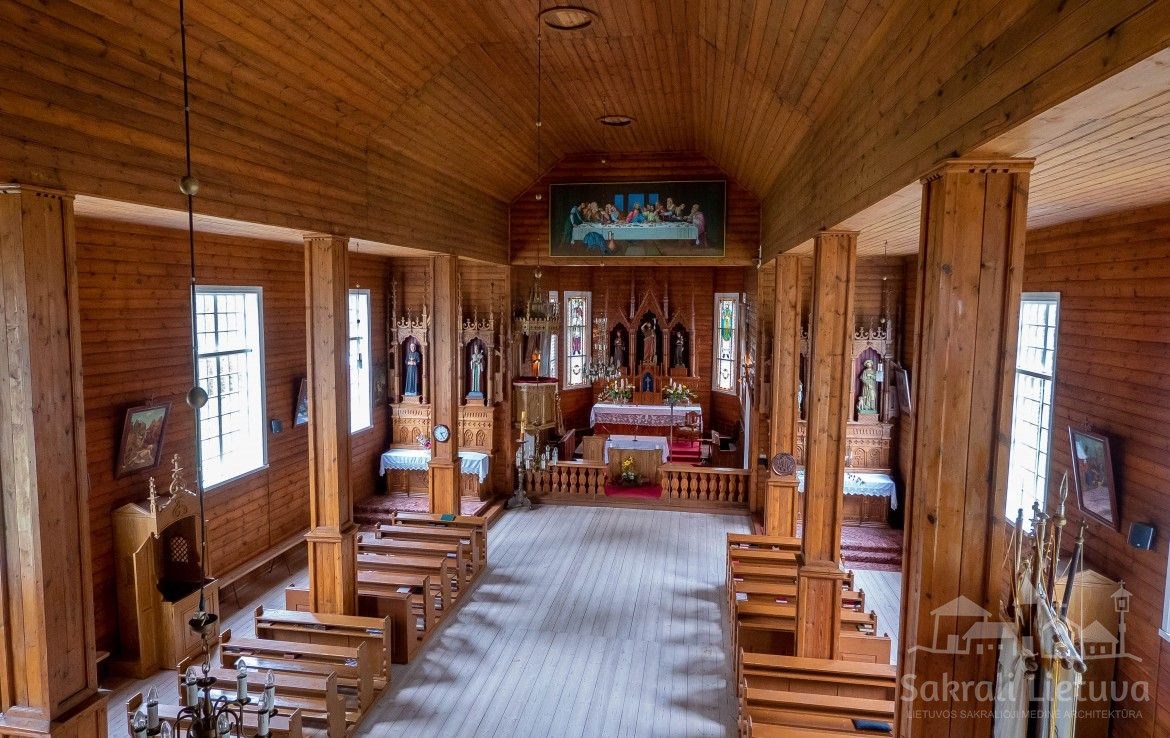