A chapel has been standing in Laukžemė already since the end of the 16th century, instead of which the landowner Andriejus Radziminskis built a small church in 1642. As written in the Samogitian Diocese: “Karolis Mirbachas built a new church in 1754, and in 1793 the Polish general, Baron Henrikas de Mirbachas, gave the priest a land and an apartment, promising to pay the salary annually, to give 30 carts of hay and to supply fuel.” However, a parish was assigned to Laukžemė by the Bishop Juozapas Giedraitis only in the first half of the 19th century. It is believed the parish church of the town could no longer accommodate the faithful; therefore, a new church was built approximately in 1850. It was consecrated by Motiejus Valančius in the name of St. Andrew the Apostle in 1857. It’s little known about subsequent reconstructions of the church; however, due to the expressive neo-Baroque style it is believed that the church could have been reconstructed in the second half of the 19th century, when Historicism appeared in the architecture.

The church is standing on a hill. The main façade facing northwest is completed by an expressive dominant – a square tower with the dome. Another small dome turret decorates the ridge of the apse. The entrance is framed by a portico with paired fluted columns, connected by the arched roof at the top. The middle section of the façade with imitative pilasters is completed by the flat triangular pediment. The church is cladded evenly – with horizontal slats. Not only the portico, but also the arched windows with pilasters on the sides make it decorative. Fan-type skylight is situated above the doors of the main portal.

The church is of rectangular plan with a slightly wider presbytery and a triple apse. The areas are separated by the arched columns of square base. The arch is also separating the presbytery from the main nave. The Crucifix and the sculptures are situated between the arch and the ceiling. Lateral naves are also divided by semi-transverse walls with arched openings. The church is decorated by the original Baroque altars. The grand altar, as it’s believed made in the end of the 17th century, distinguishes itself by decorativeness: with openwork columns and large carved wings. The church is also famous for the especially valuable and, as it’s believed, one of the oldest wooden sculptures of the Mother of God in Lithuania, called the Madonna of Laukžemė.

The wooden belfry, built it 1864, is standing next to the church, which was reconstructed in the beginning of the 20th century. It has a copper bell made by Jozefas Litvinovičius in 1740. The belfry is of the folk style, has a silhouette typical of the Samogitia region, it is narrowing towards the top, has wide pent roofs at the bottom, and is cladded with vertical slats. At the top of the belfry there are rectangular acoustic openings with wooden horizontal blinds; the building is completed by the four-slope pyramidal roof. 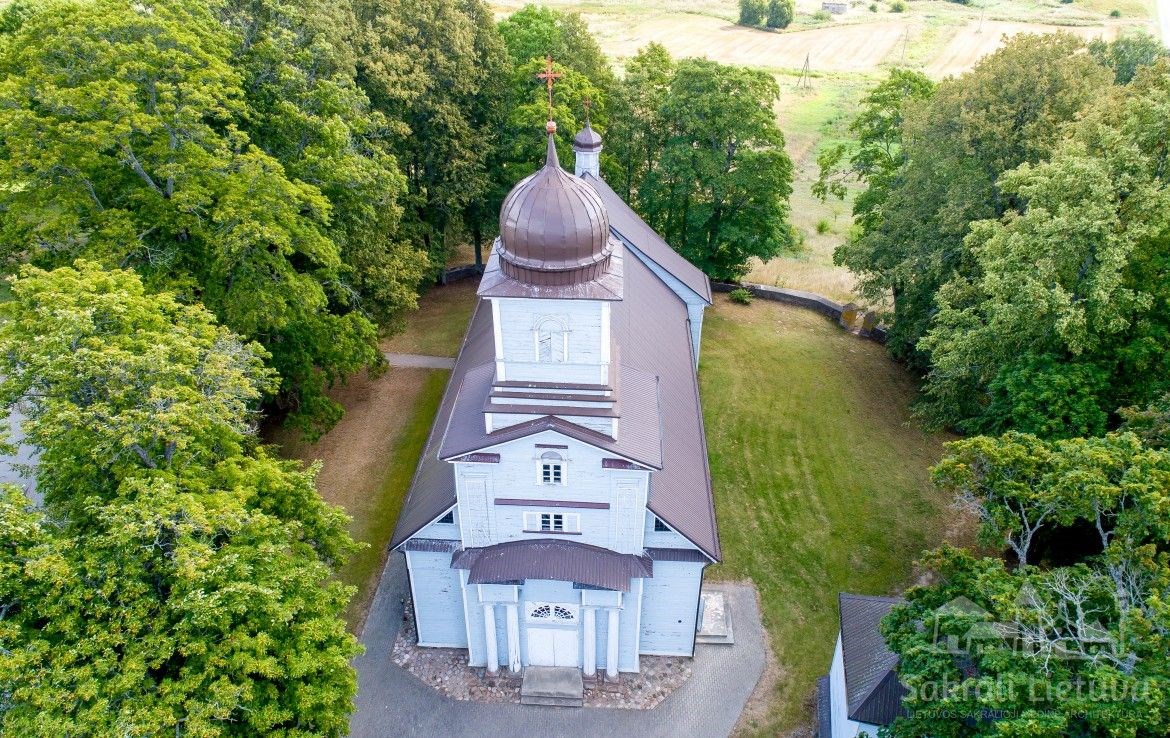 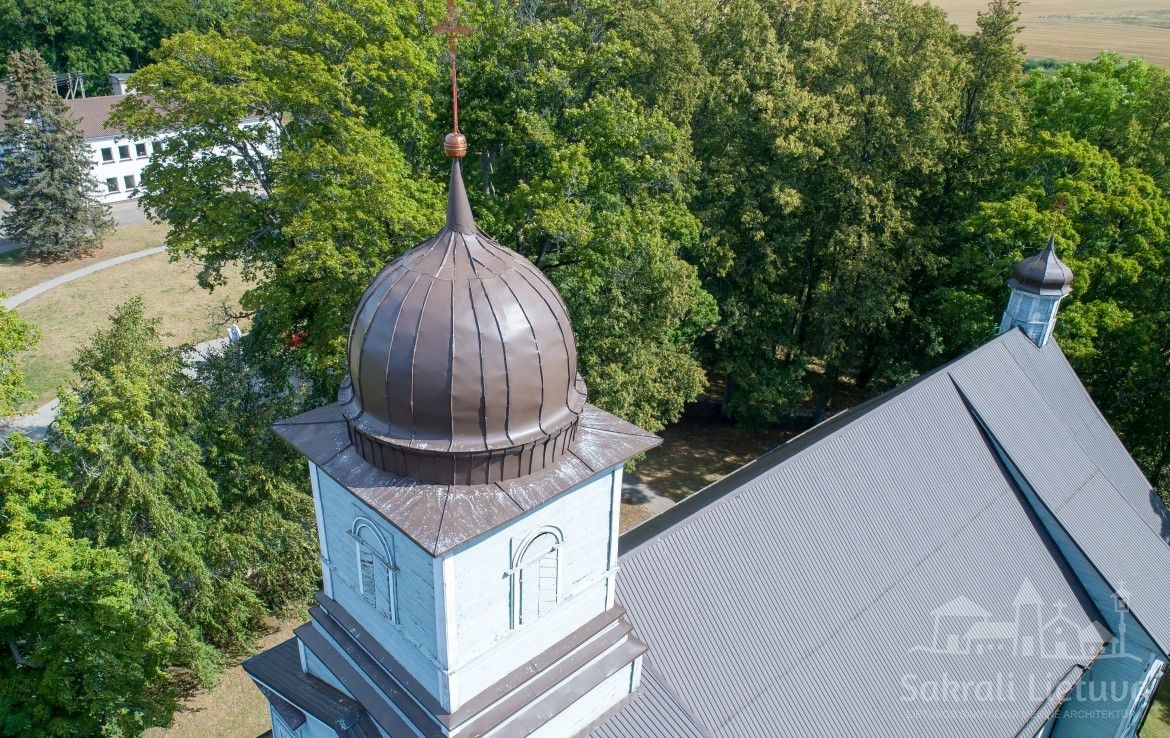 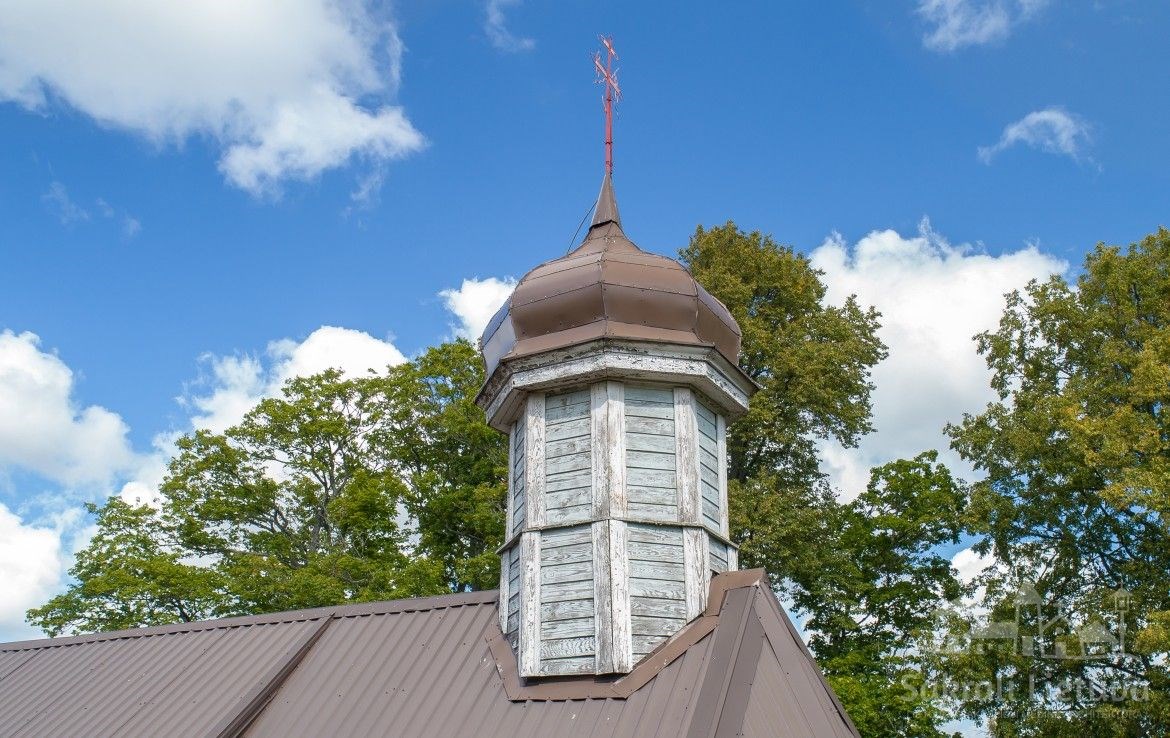 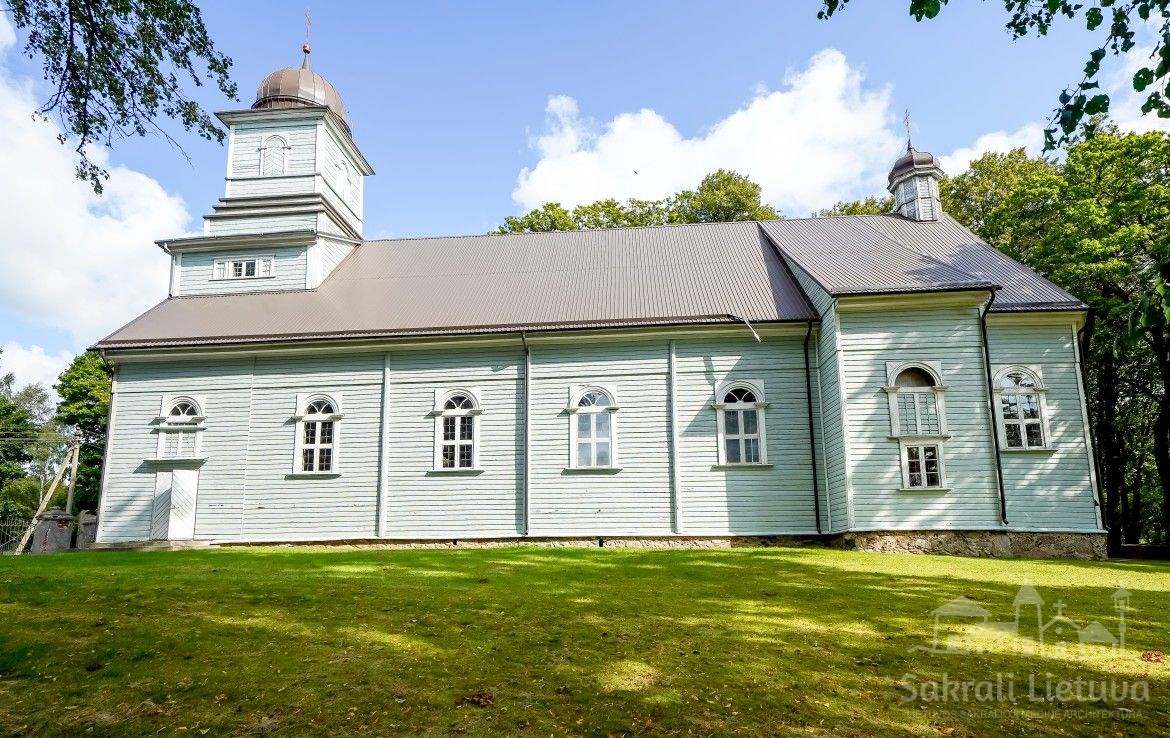 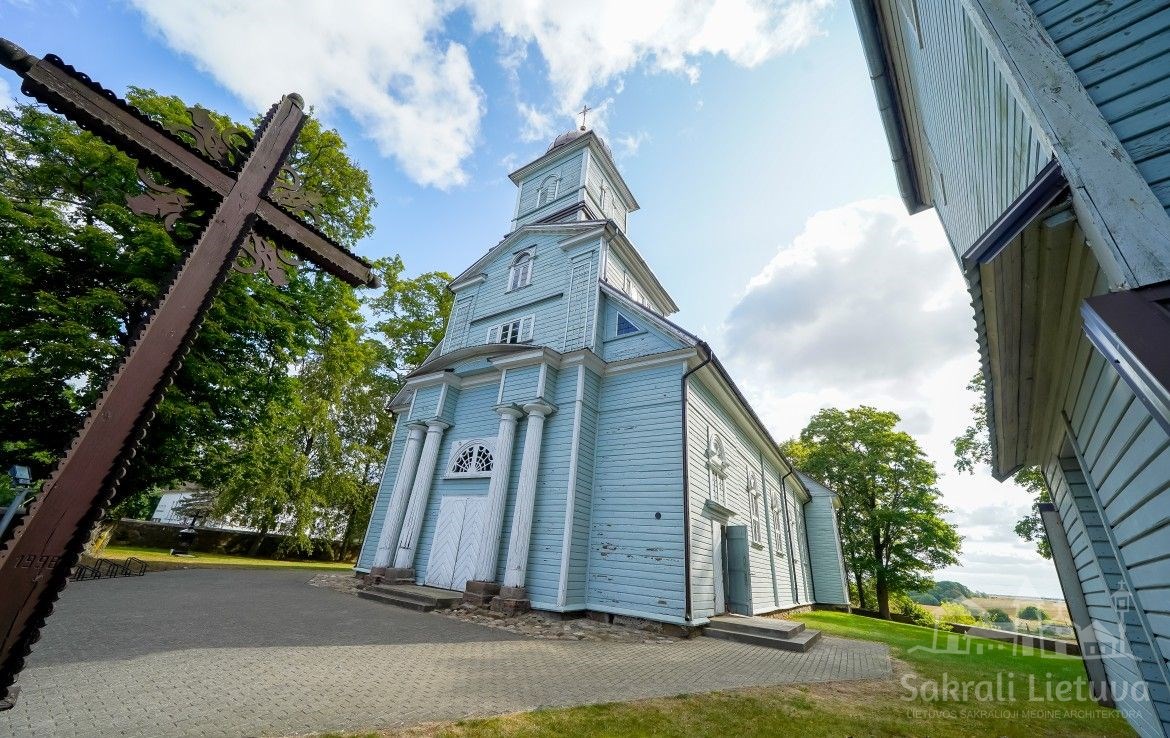 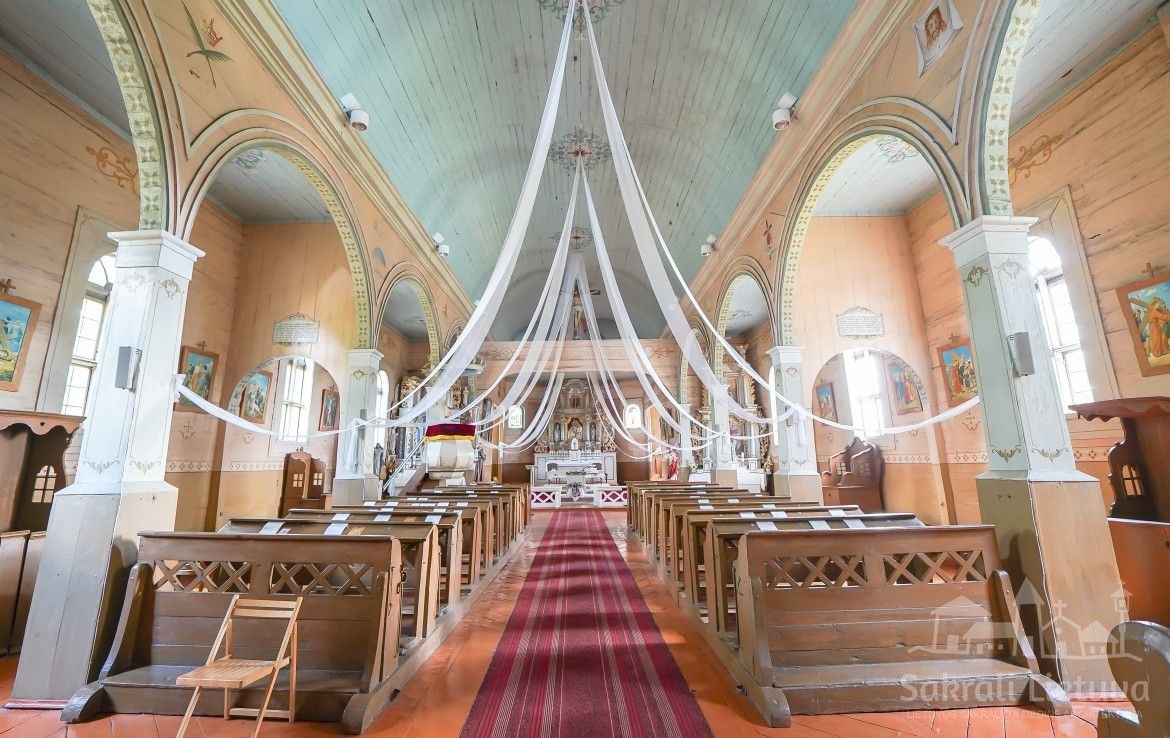 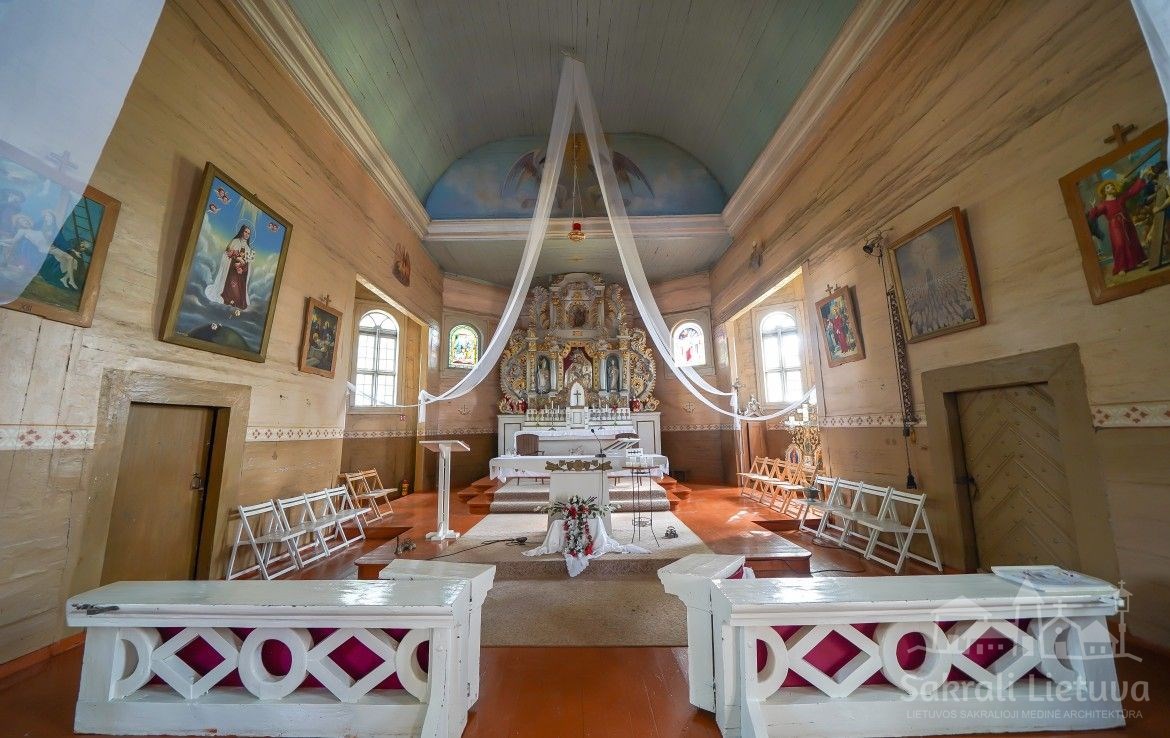 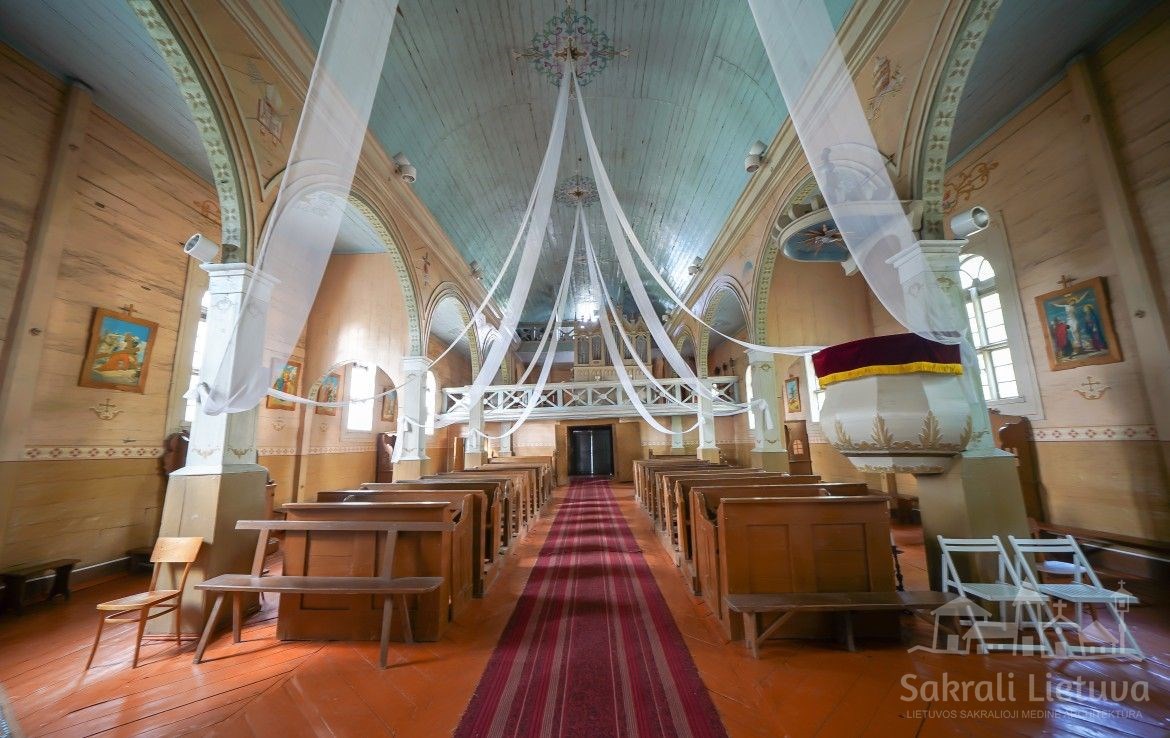 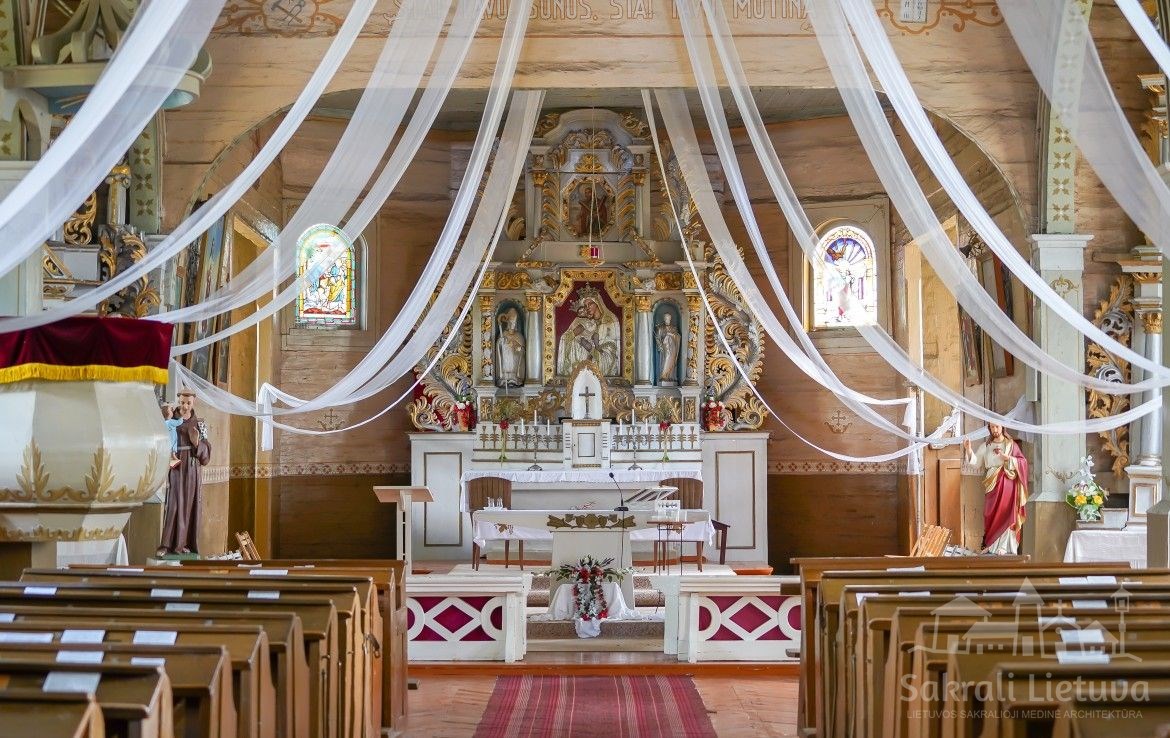 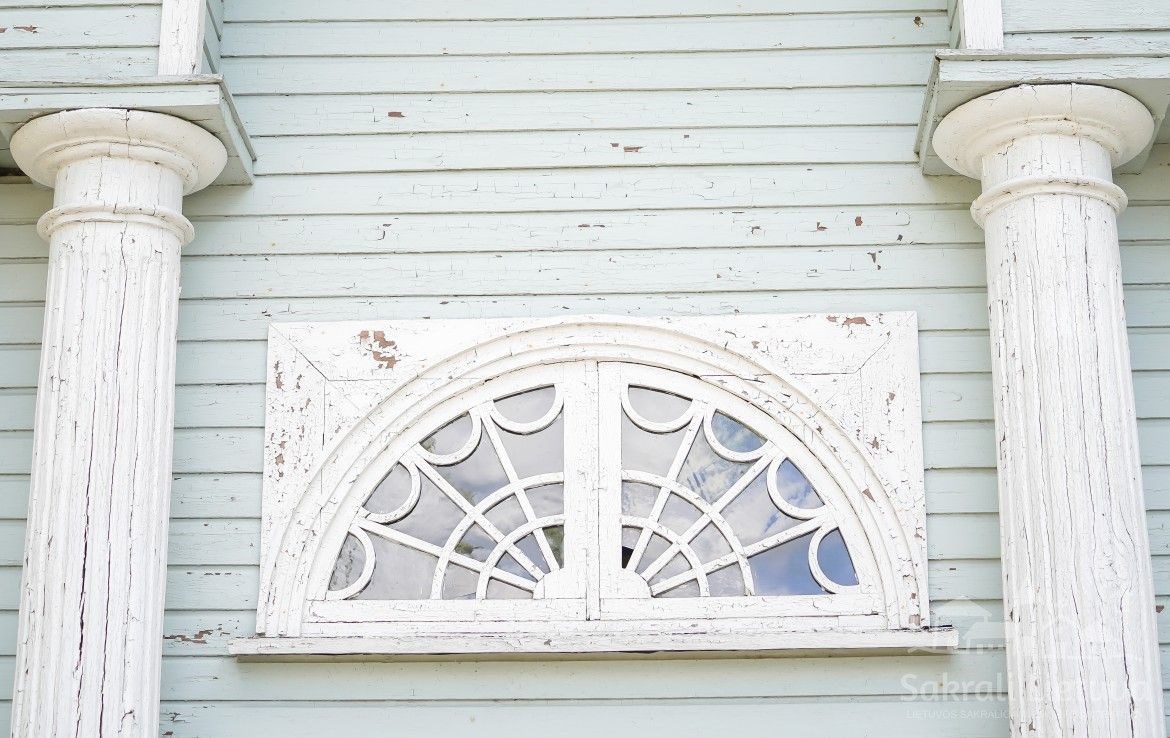 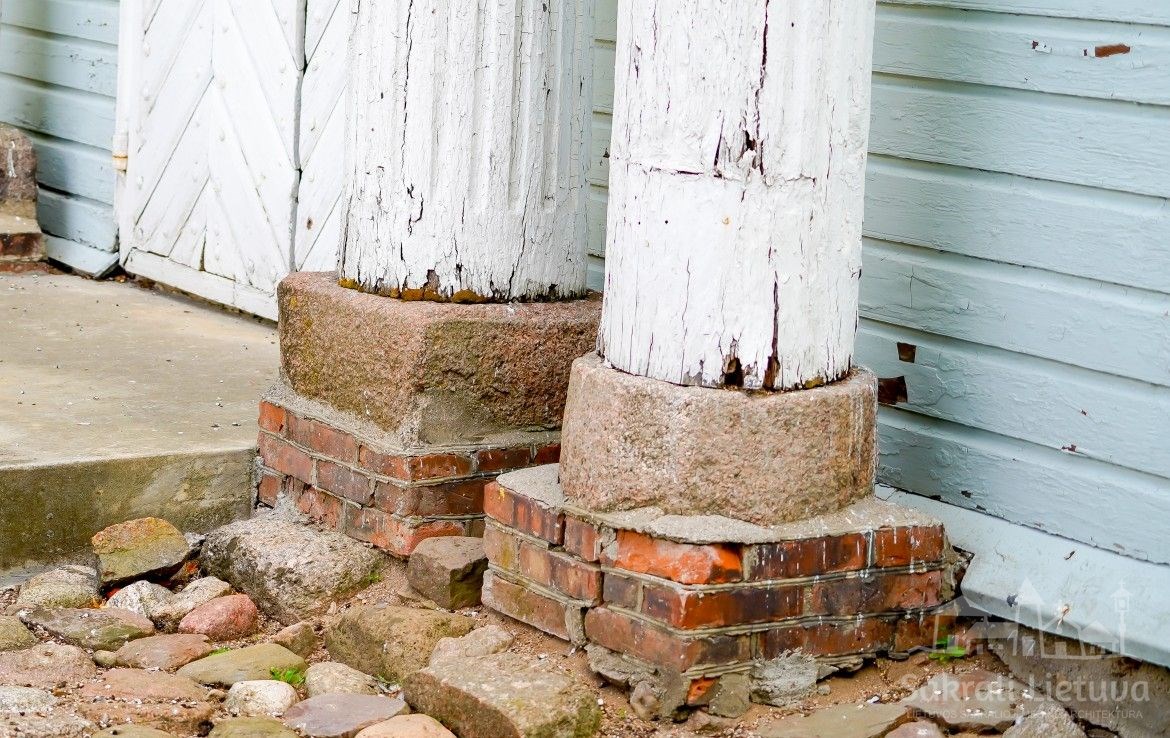 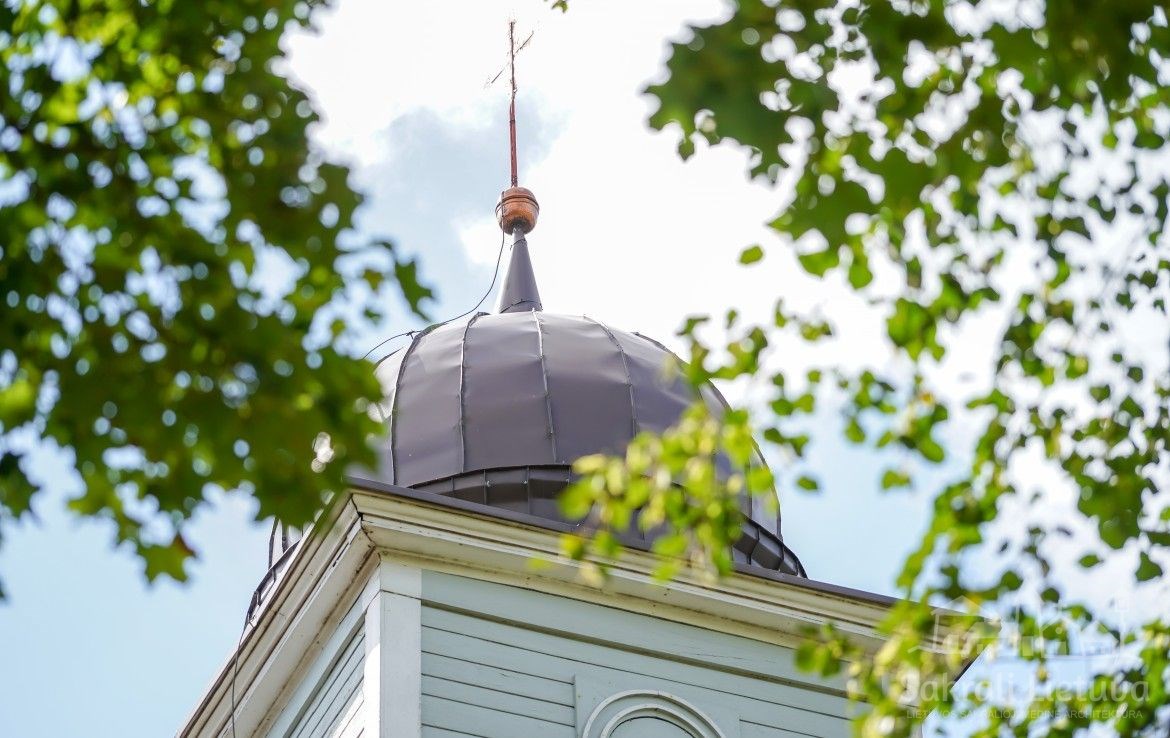 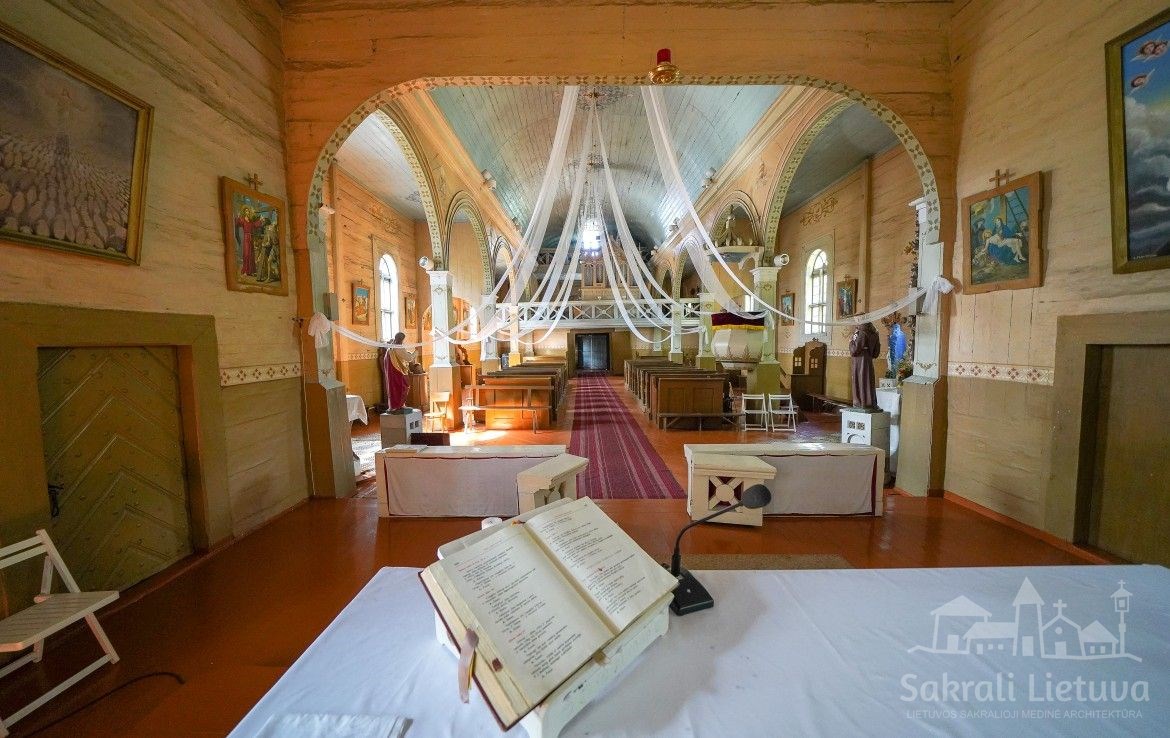 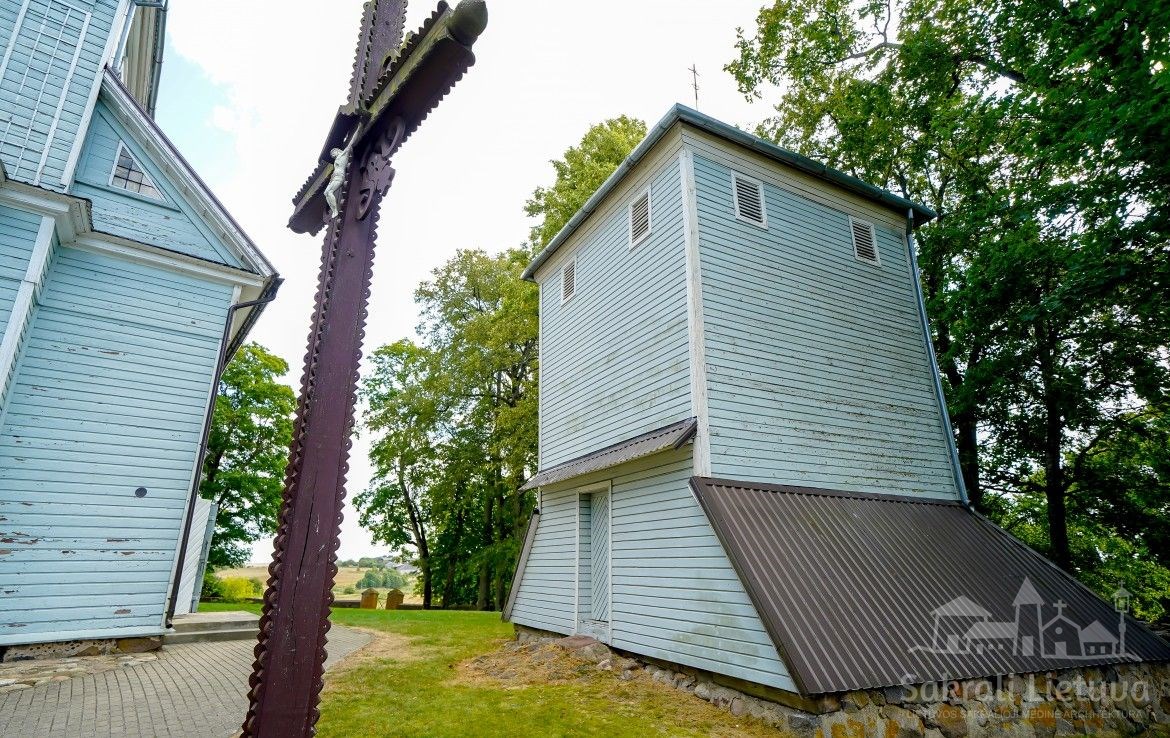