Church of the Discovery of the Holy Cross of Suginčiai

The first chapel, built in Suginčiai Manor, dates back to 1658. The new in church appeared in the place of the old one in 1773 – it belonged to the Dioceses of Vilnius and Samogitia. The current Church of the Discovery of the Holy Cross of Suginčiai was built 1910 under the initiative of the priest A. Ragažinskas and by the funds of the parishioners. In 1935, the remains of Marija Bilevičiūtė-Pilsudskienė (1843-1884), the mother of Juzefas Pilsudskis, were exhumed in a burial vault set up northeast of the church in the cemetery located next to the church in Suginčiai, and in the exercise of the last will of J. Pilsudskis reburied with his heart in Rasų cemetery of Vilnius .

The Church of the Discovery of the Holy Cross of Suginčiai is of the neo-Baroque style with the elements of neo-Classicism. The area is of the cross plan, basilica with a triple apse. Two-storey sacristies are attached at the sides of the presbytery. A stocky octagonal turret covered with a pyramidal roof with a lantern is raised in the cross-section of the nave and the transept. The turret is decorated with triangular cornices. A small quadrilateral turret is traditionally incorporated on the ridge of the three-sided sloping apse. Two non-protruding turrets with four-sided sloping roofs, completed by crosses, are also incorporated on the sides of the main façade. A wide triangular pediment with a motif of gloria is situated between the turrets. A window with the architraves and a triangular cornice is incorporated above the double-leaf doors of the main façade. The most decorative arched windows of the transepts and the apse are with a decorative glazing. Three-slope pediments of the transepts have with semi-circular skylights. The church is cladded vertically with narrow slats. The contour of the turrets is marked by a horizontal cladding and fastening verticals.

The sculpture of the Crucifix created in the 19th century, which is covered by the picture of the Sacred Heart of Jesus, is situated in the niche of the great altar of a single-section. Some of the works have been transferred here from the old church of Suginčiai. The church is distinguished by the fact, that a collection of the white towels with special red threads at the ends, surviving from the 19th century, are stored here. It also stores the reflection of the culture of the manor – cross-stitched towel of the beginning of the 20th century, decorated with lace and coloured ribbons. The covers of the mensa of an altar reflect the folk weaving traditions of the Eastern Aukštaitija region.

The churchyard of the church is surrounded by stone masonry fence and wide red brick three-arch gates with turrets. It has a three-section belfry with an open arched gallery at the top and a pyramidal roof. An extension is attached to the side of the belfry. 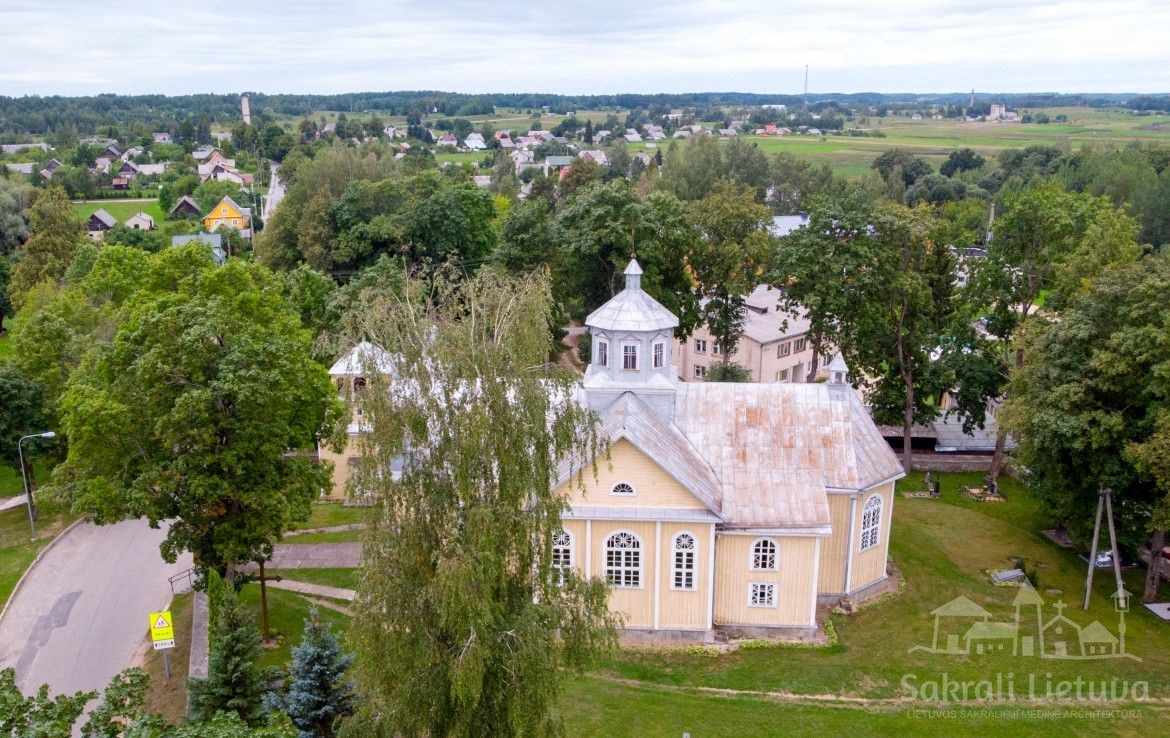 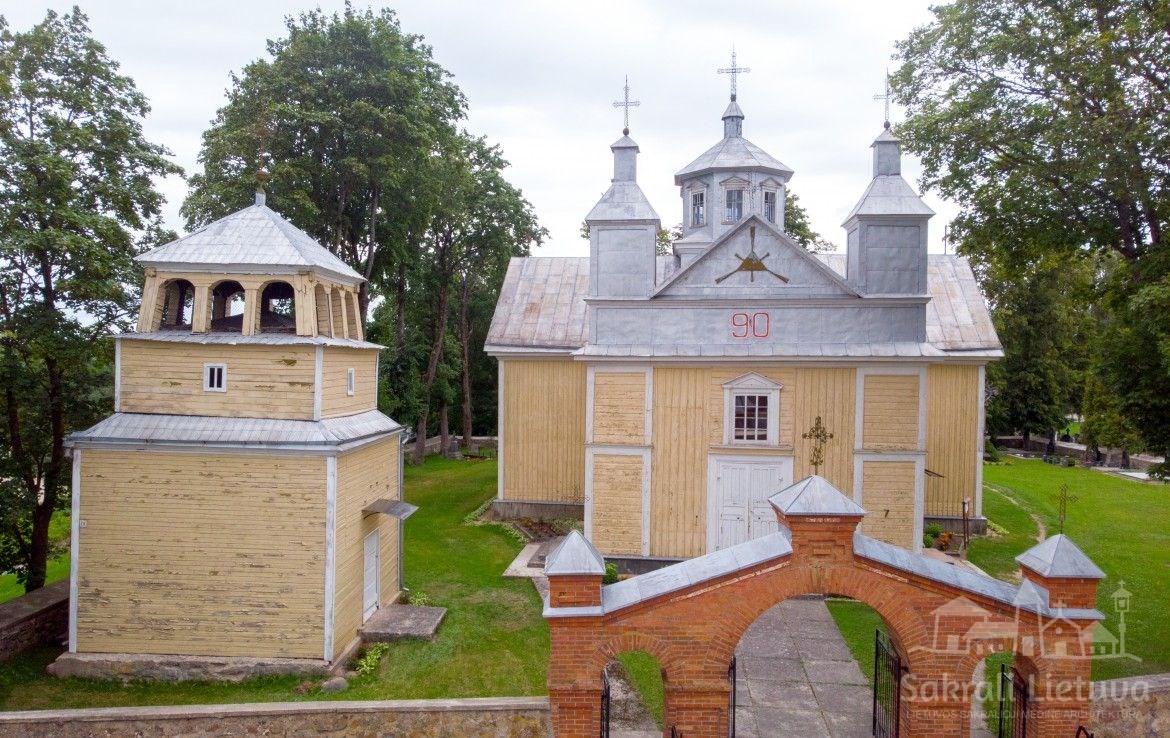 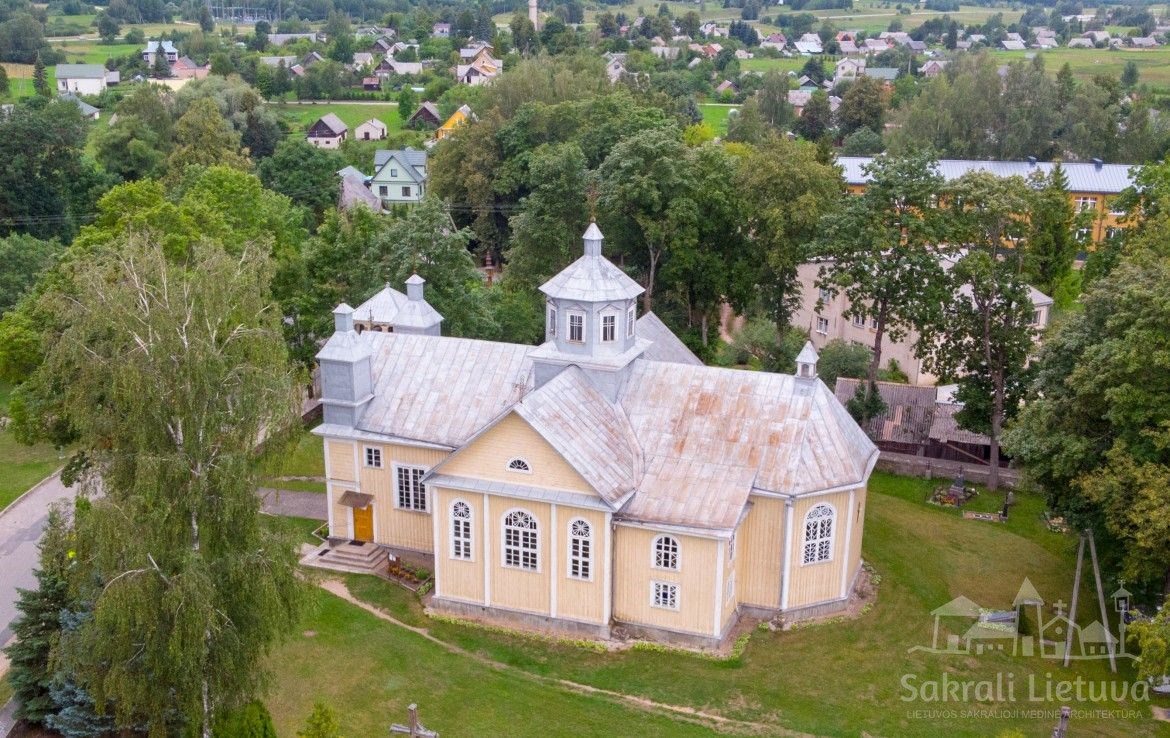 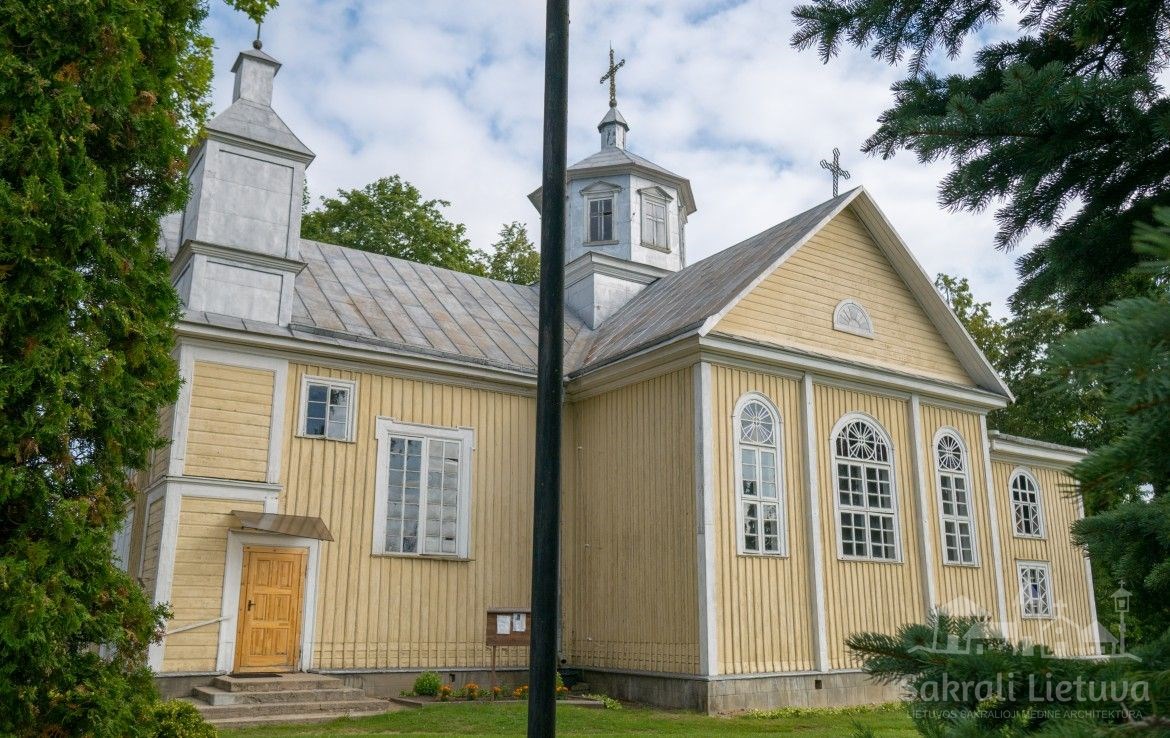 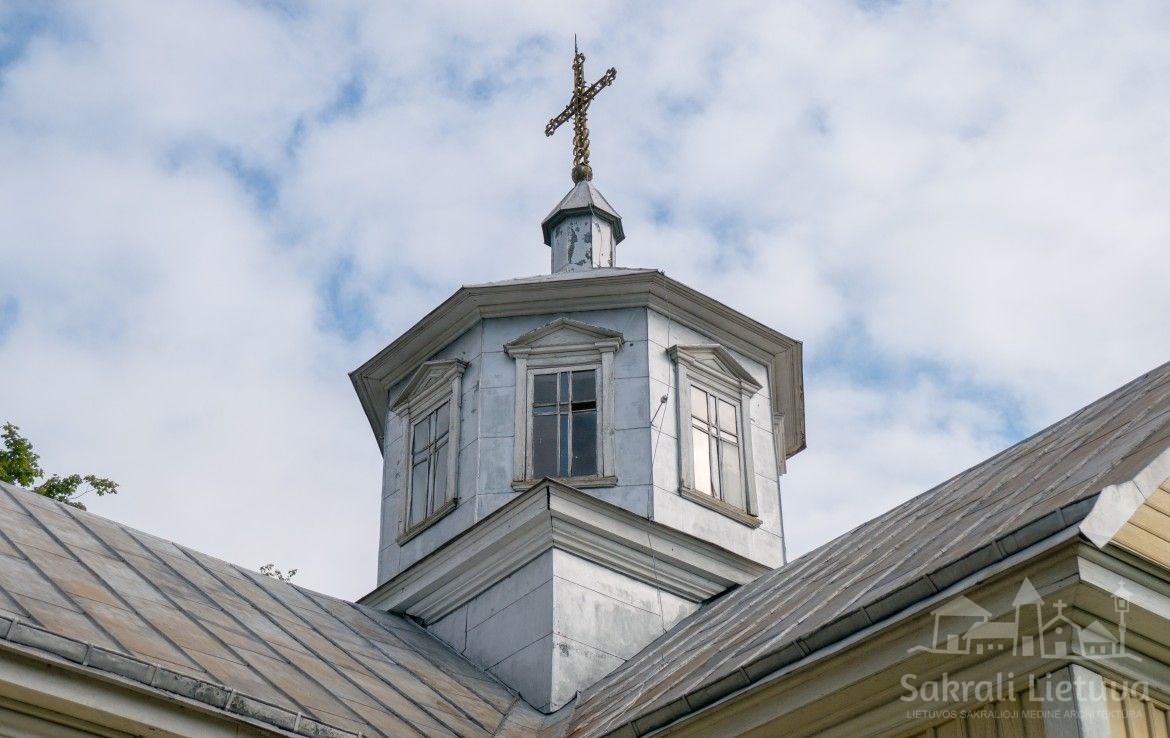 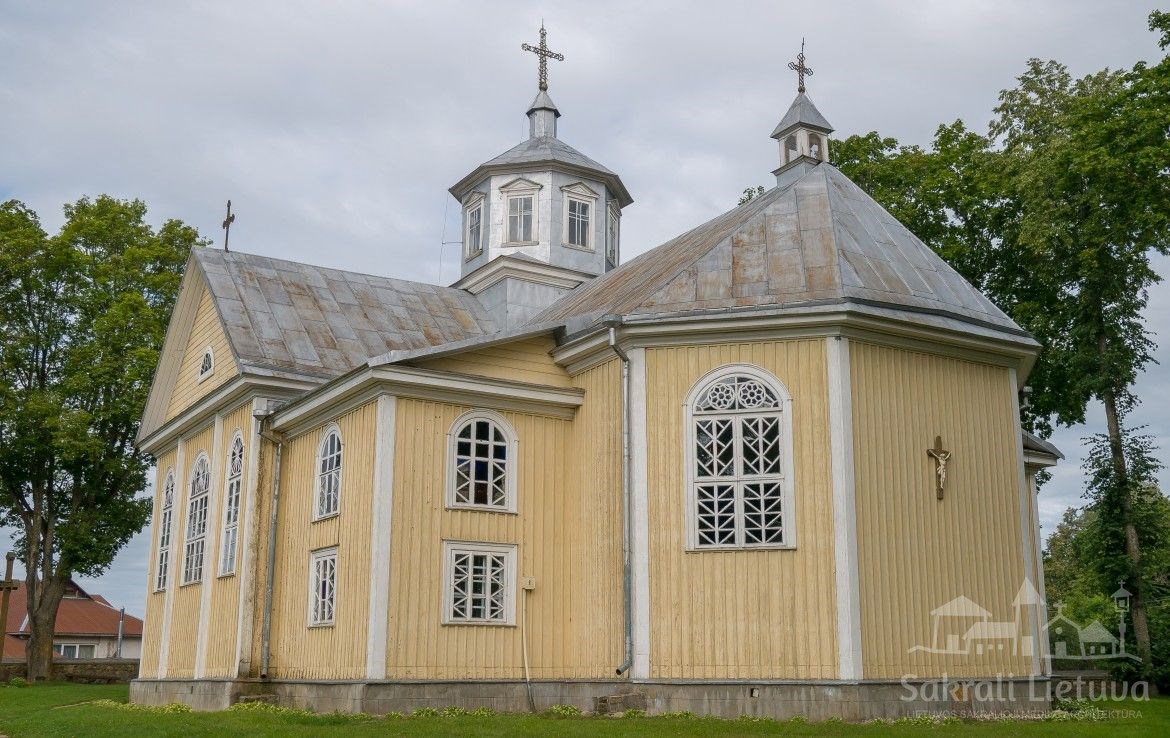 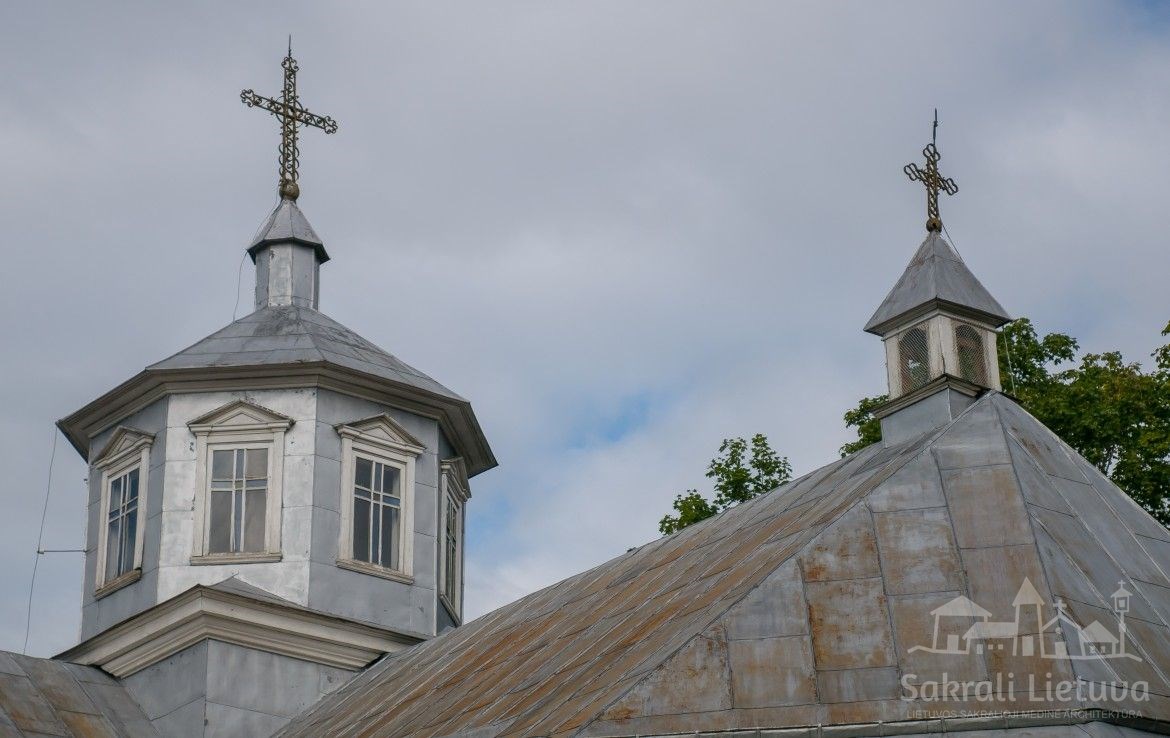 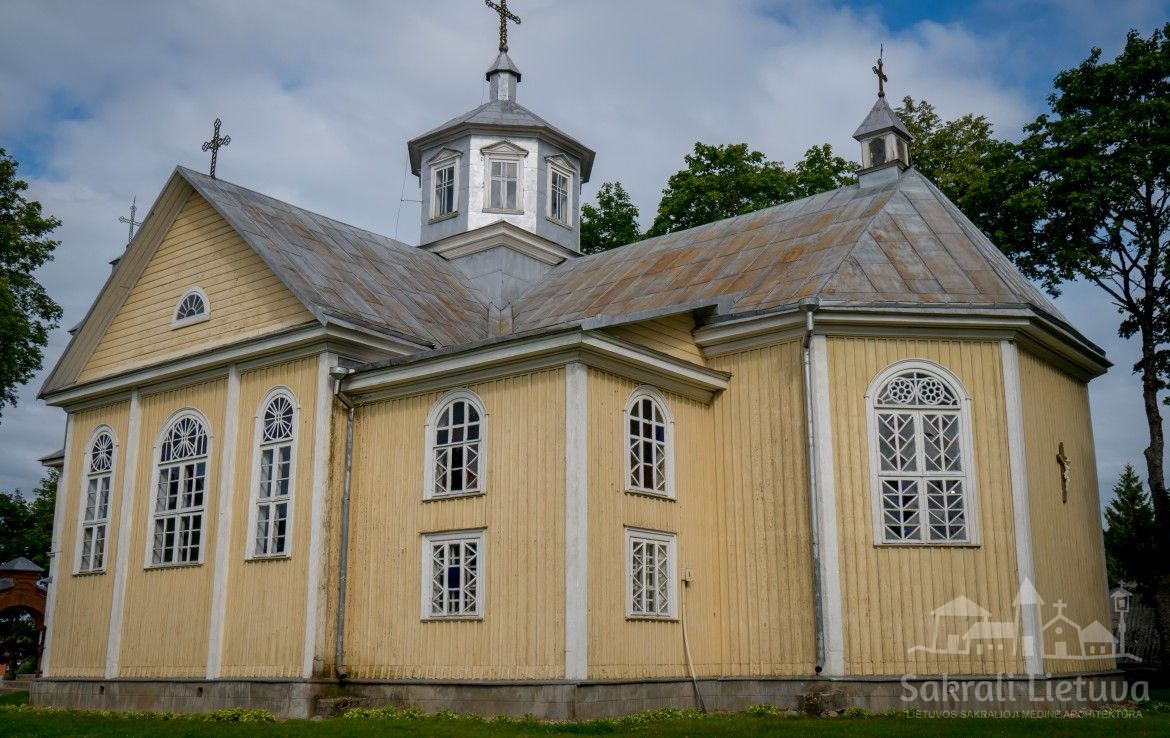 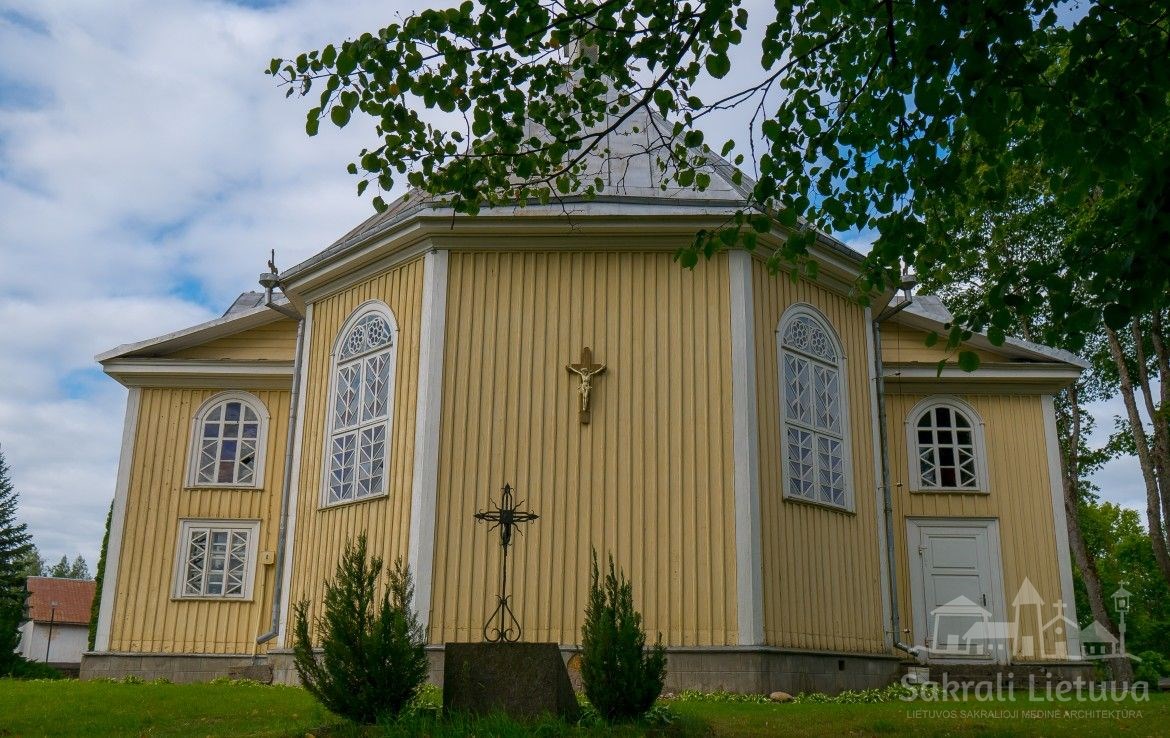 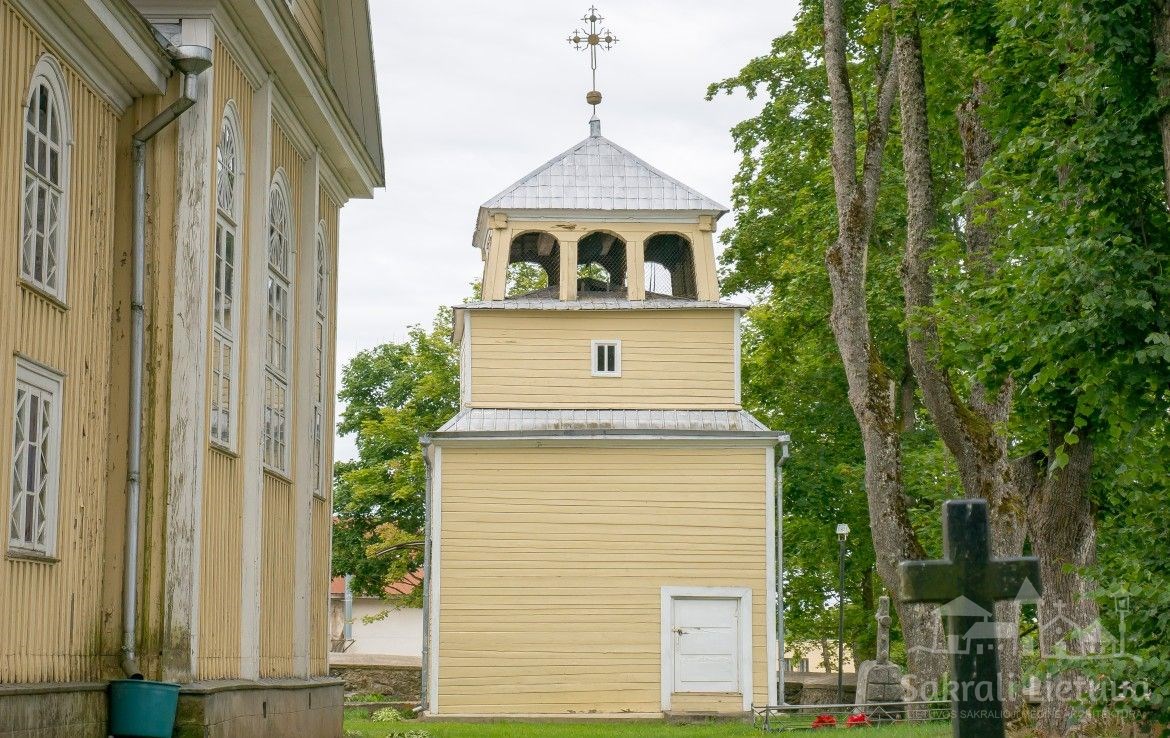 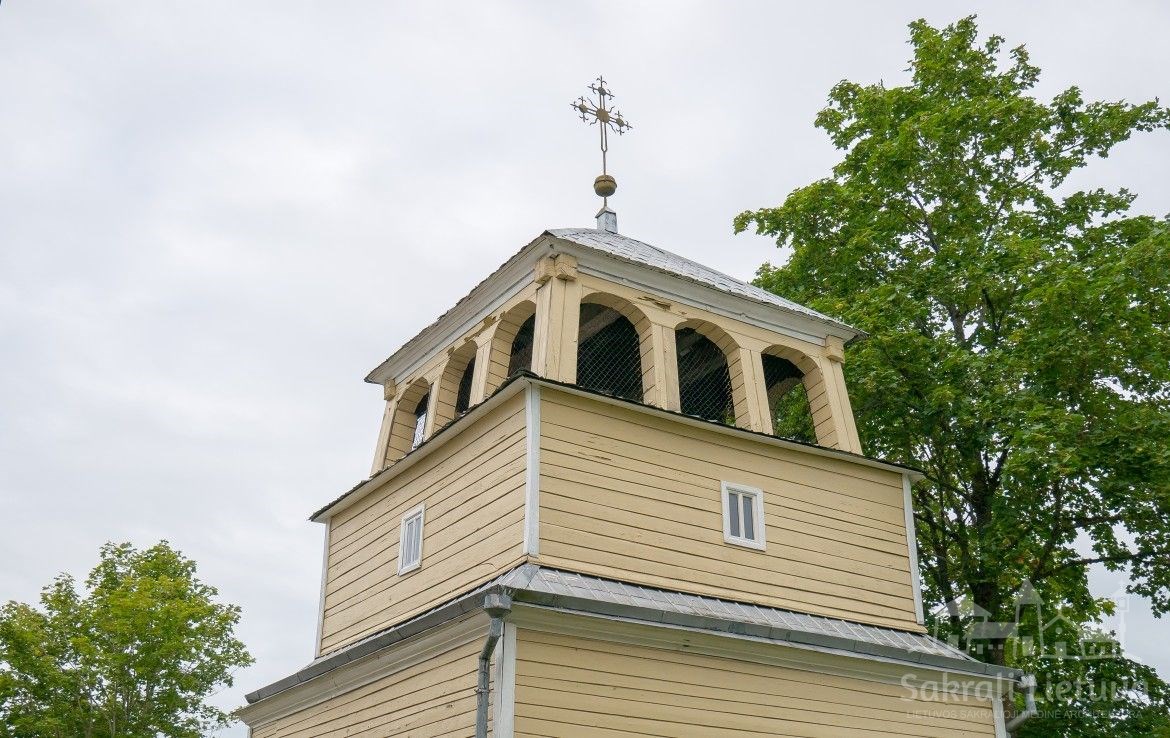 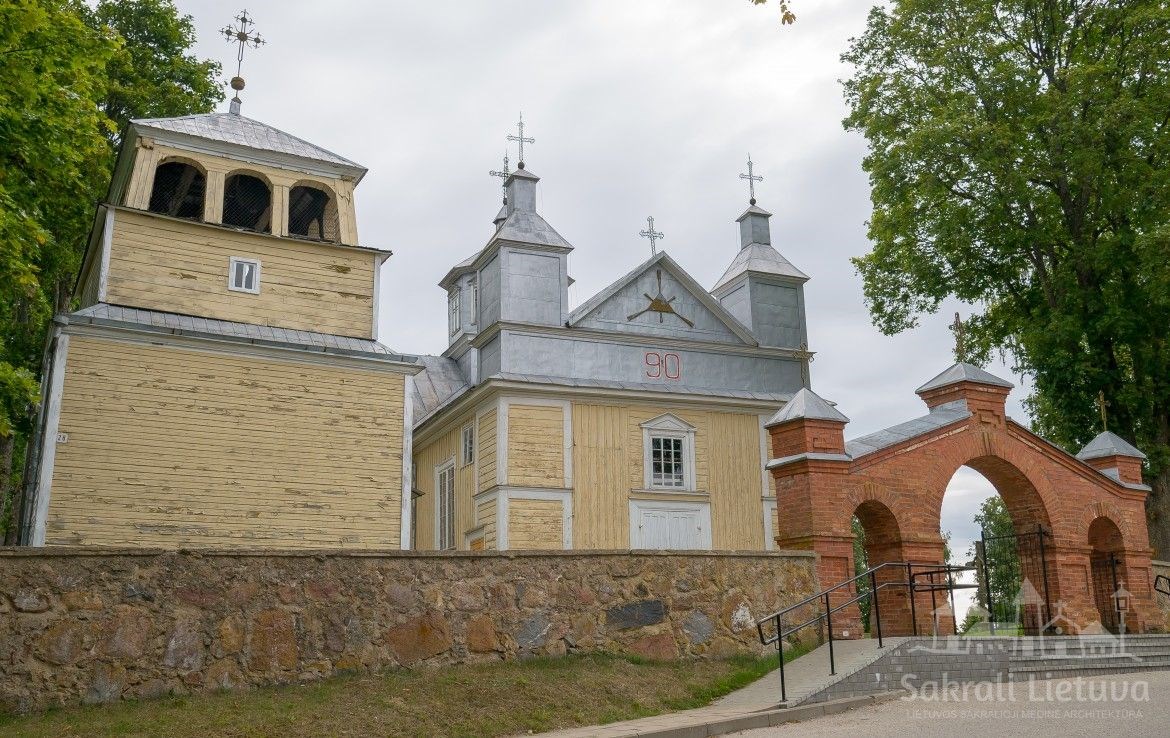 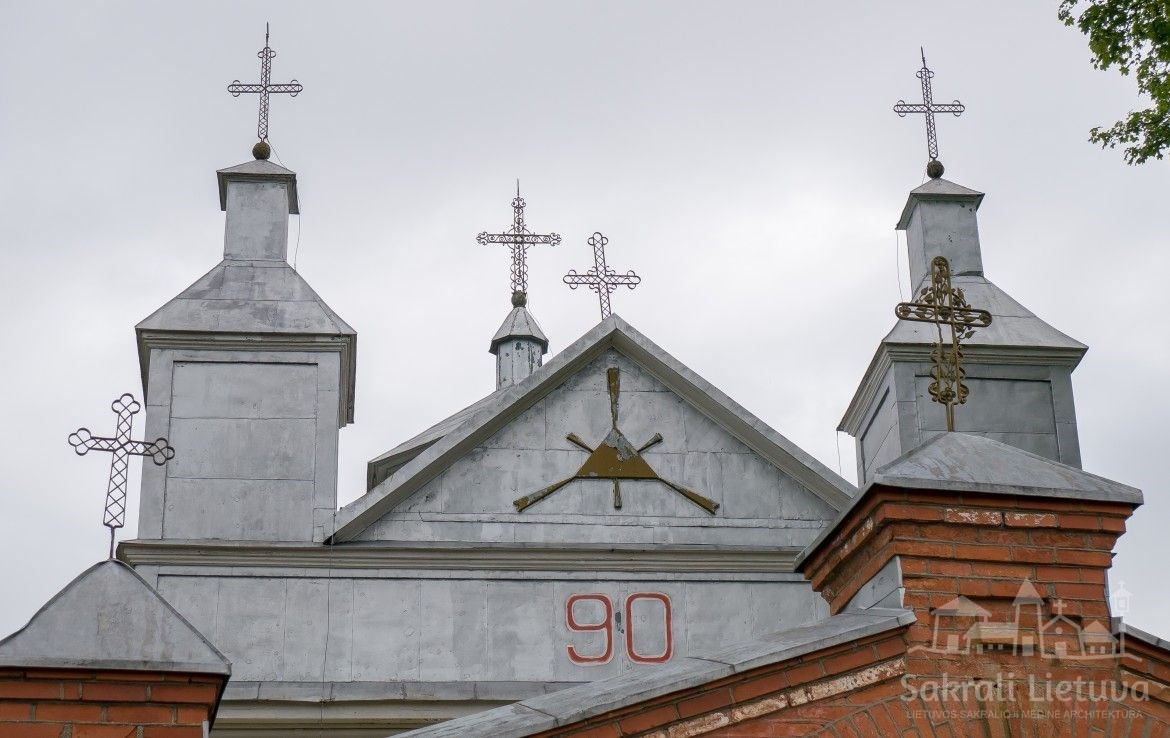 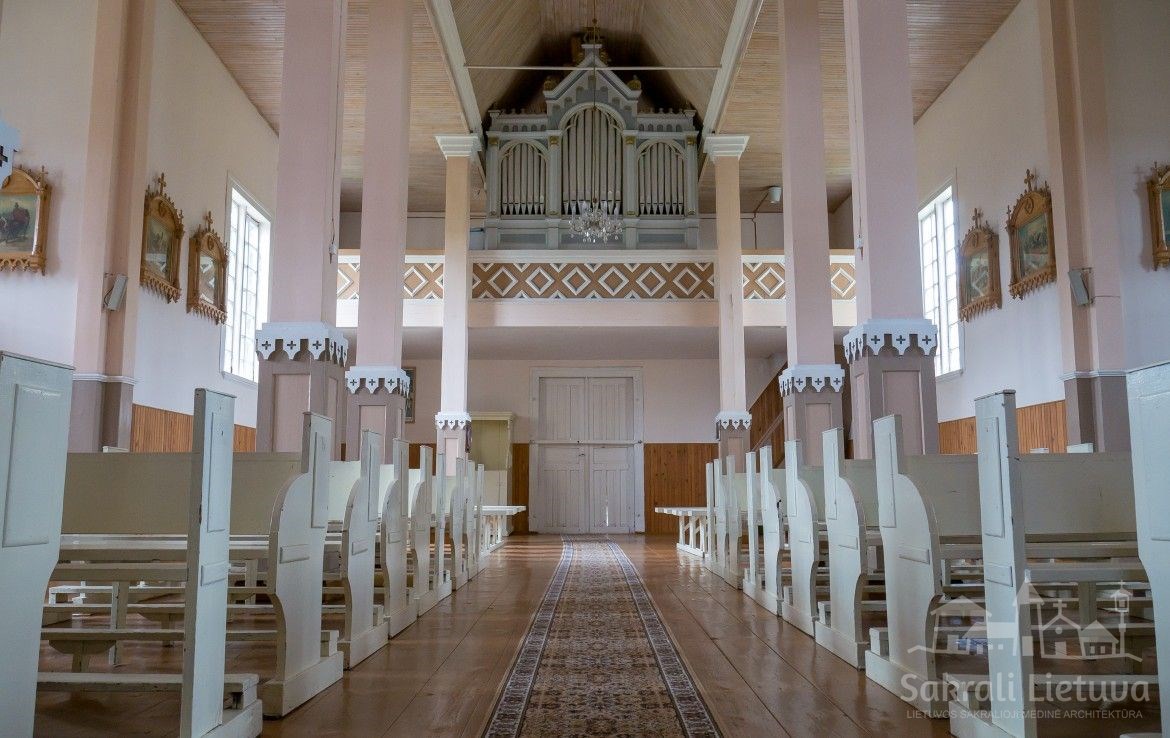 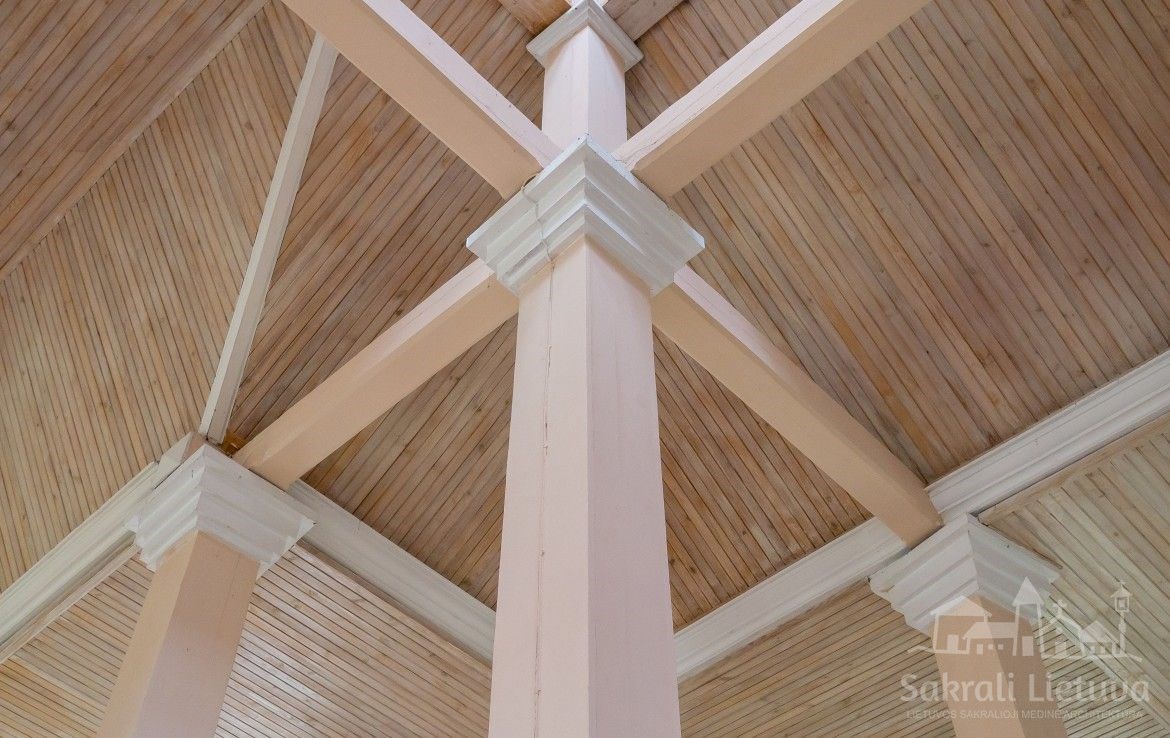 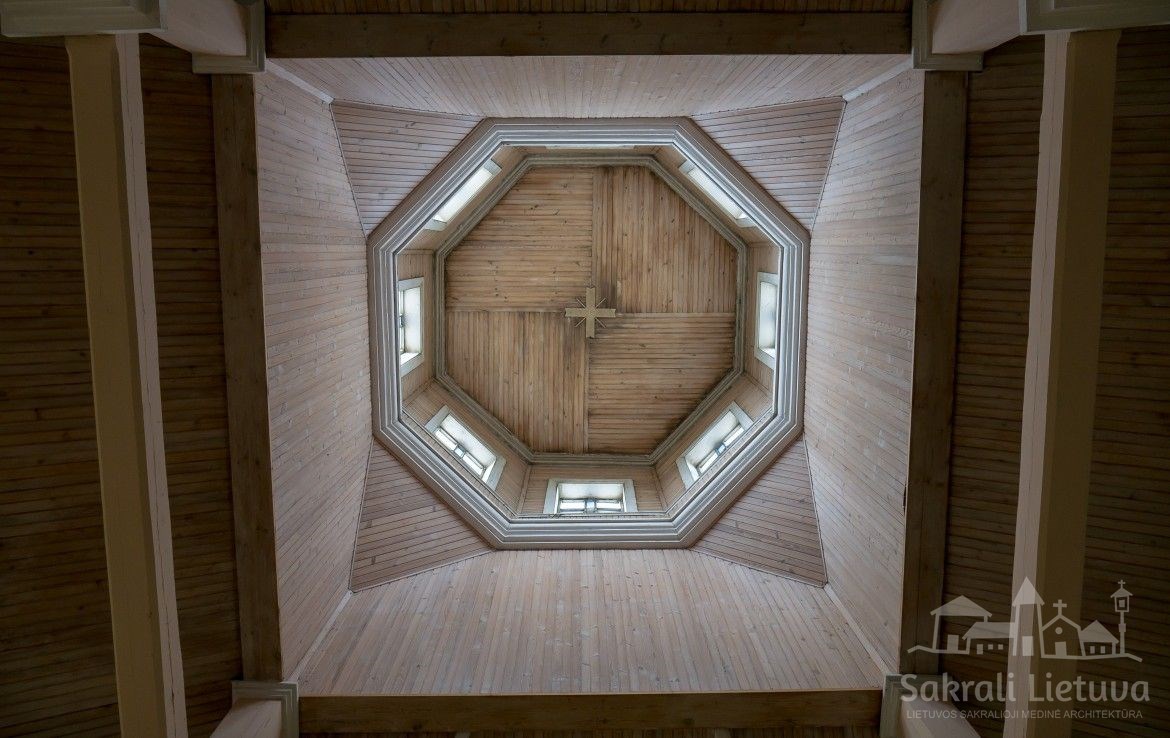 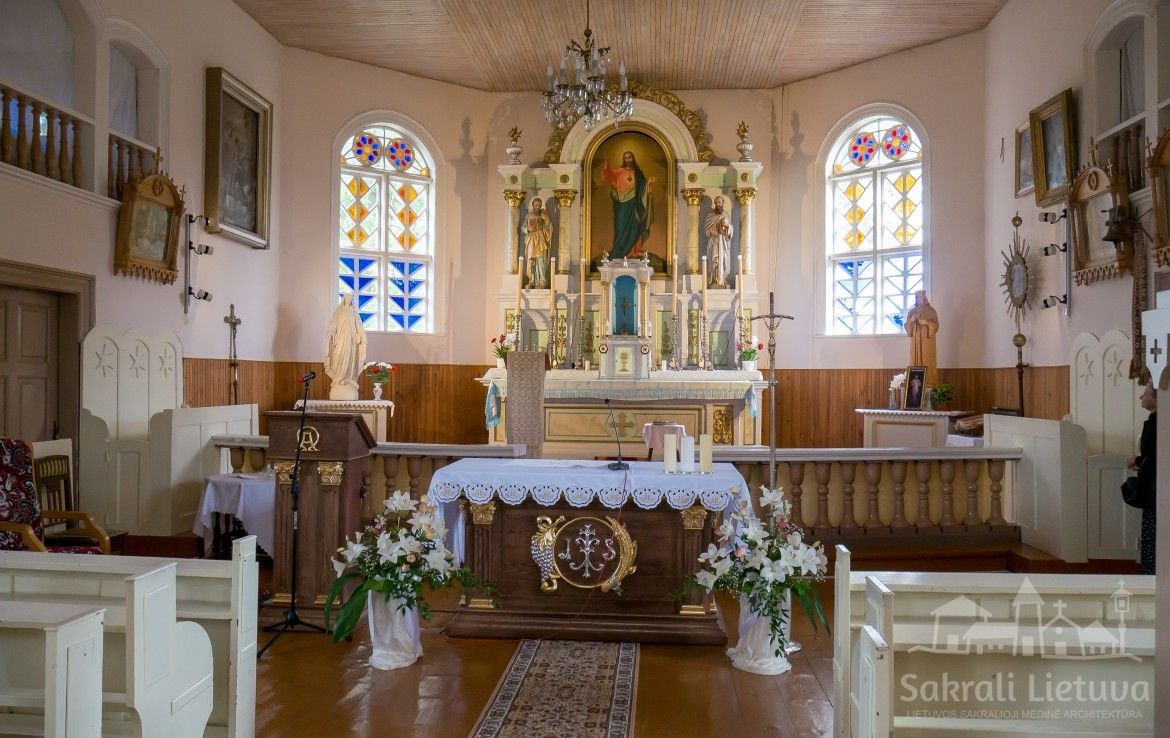