Three-storey roofed pole with ornamented cross and the scultpures of Archangel Gabriel, St. George, the Christ, John the Baptist, and St. Casimir

Samogitia is dominated by chapel poles and chapels, while Aukštaitija region is dominated by roofed poles, although other works of cross-carvers are also found there. Roofed poles here come in one, two or even three sections, and are richly ornamented. According to most researchers, roofed poles are the oldest wooden monuments in Lithuania: it is assumed that they could have been built before the introduction of Christianity. Such monuments are known to be typical to Lithuania in the 19th century: they were built in cemeteries as tombstones, many of them were installed at roadsides and near country houses. The peculiar shapes of roofed poles drew the attention of many travelers and researchers: the early 19th century sources even referred to them as “Lithuanian crosses”.

A roofed pole is a tall pole (sometimes up to 7 m or more) with a small roof that has lateral supports and is topped with a wooden peak with an iron forged cross or a “little sun”. According to Ignas Končius, roofed poles were built in Aukštaitija longest of all, and their tradition faded at the beginning of the 20th century. The oldest recorded roofed pole was built in 1760 and reached our times thanks to Mykolas Brenšteinas: a booklet published by him in 1906 contains a photograph of this monument.

The chapel column in the churchyard of Kavarskas church is a perfect reflection of the cross-carving tradition of Aukštaitija region. The small roofs of the roofed pole are four-sided, their side panels decorated with openwork, and include a tall and profiled wooden roof tops. The profiled supports of the roofs are adorned with curved floral motifs, the support of the large roof and cornices of the under roof area are covered with hanging bells, and the top of the roofed pole is adorned with a highly decorative ornamented sun-cross. The four-edged, high, slim, profiled pole is decorated with wood-carved decor elements, which, like the roof decorations, are highlighted in color, with their white color distinguishing them against the brown painted background.

The researcher Jurgis Baltrušaitis referred to this type of roofed poles common in Aukštaitija as a “lantern”. According to him, they differed from the conventional “mushroom” type roofed poles by four curved or straight supports, which have a “foot” adorned with small geometric teeth at the bottom. Usually, four small wooden statues of saints were placed in the “lantern”-shaped roofed poles. The chapel pole in Kavarskas includes the sculptures of the Archangel Gabriel, St. George, John the Baptist, and St. Casimir, having reached our days from the middle of the 19th century. 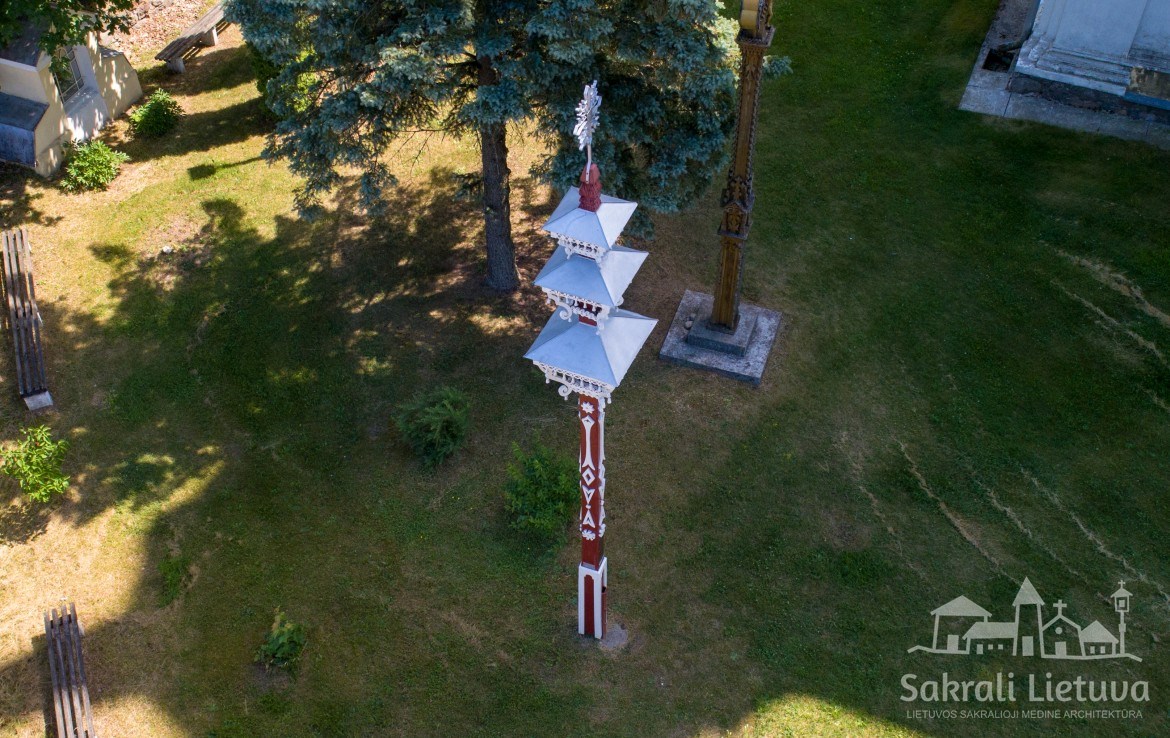 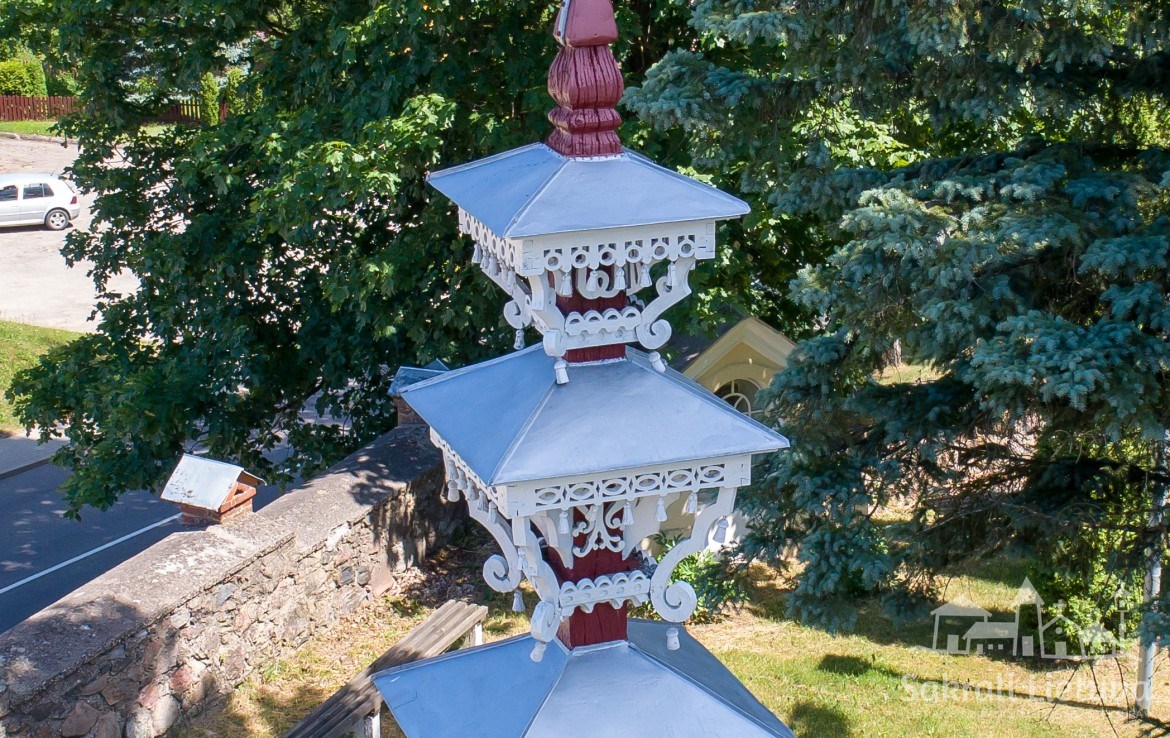 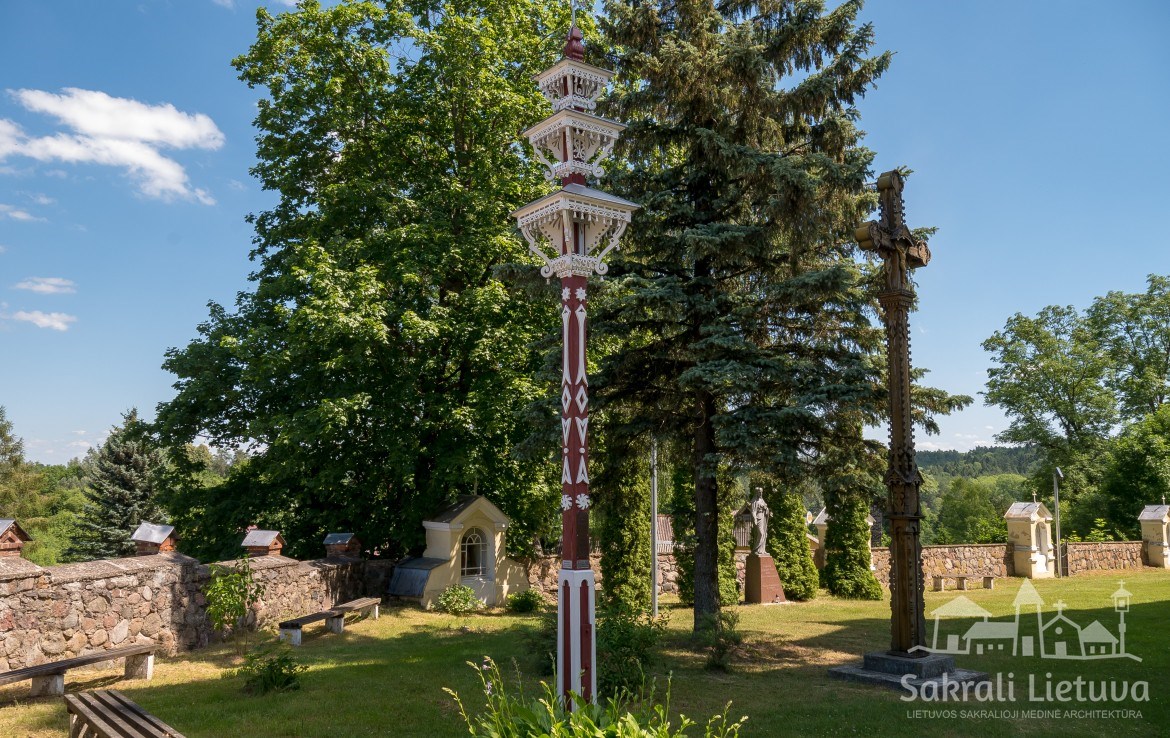 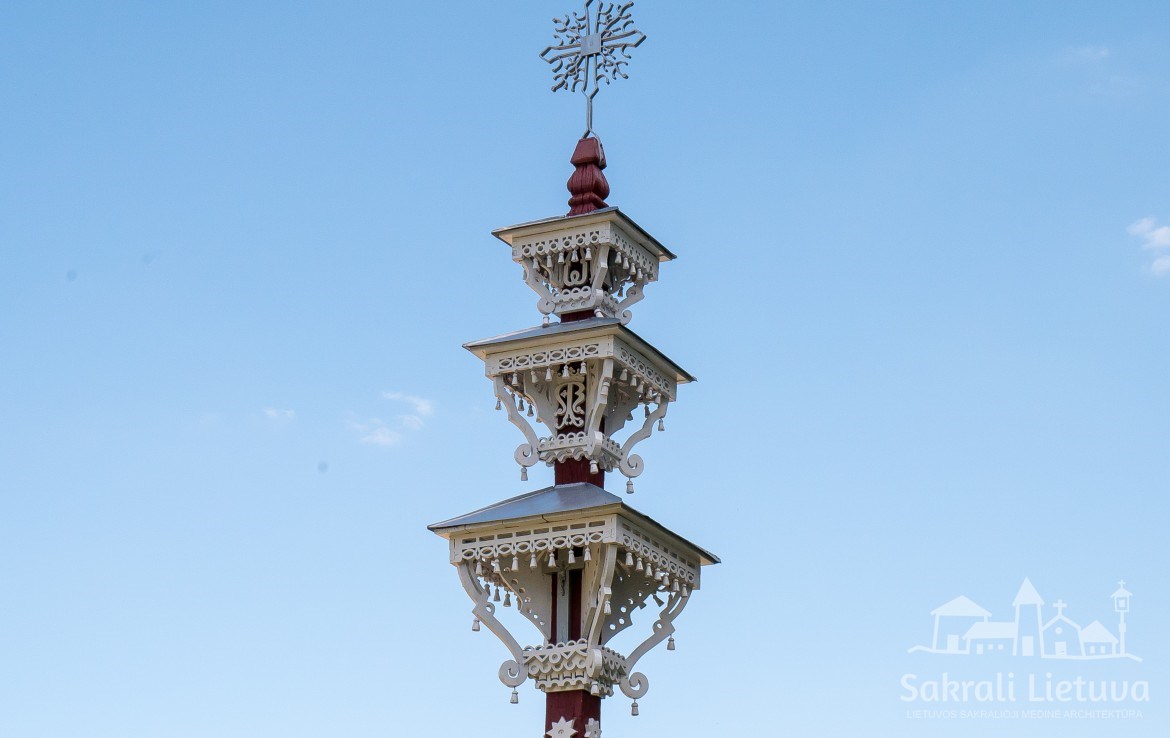 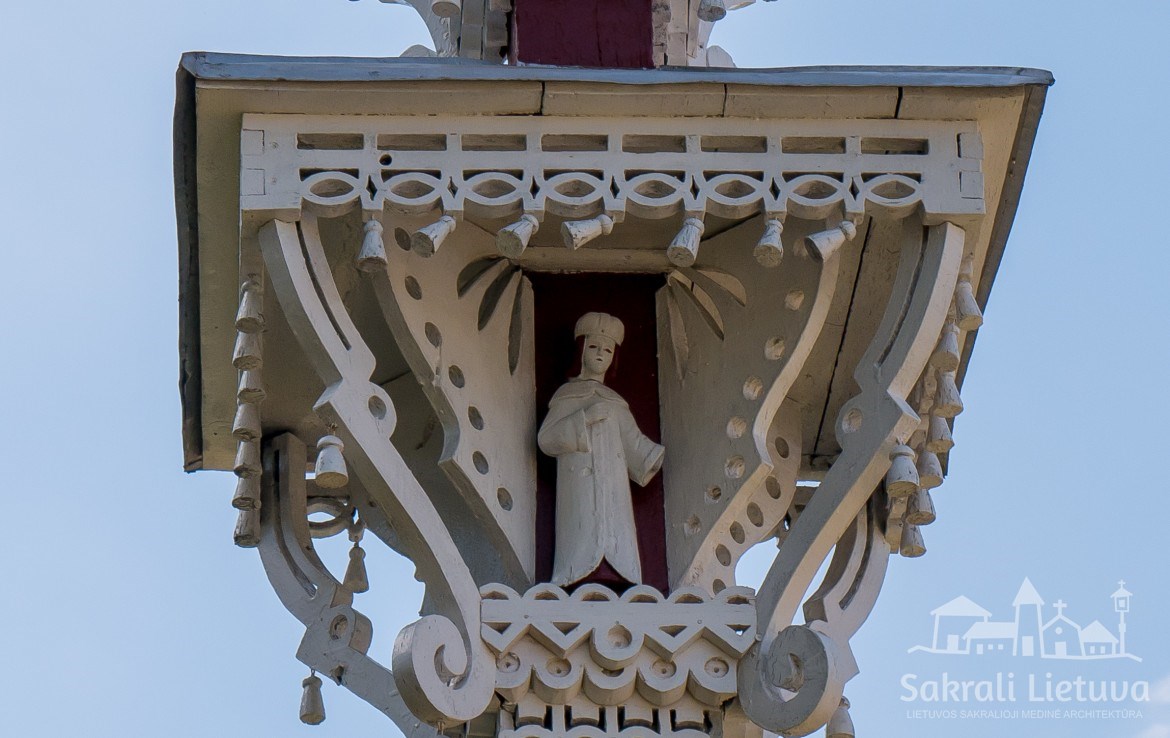 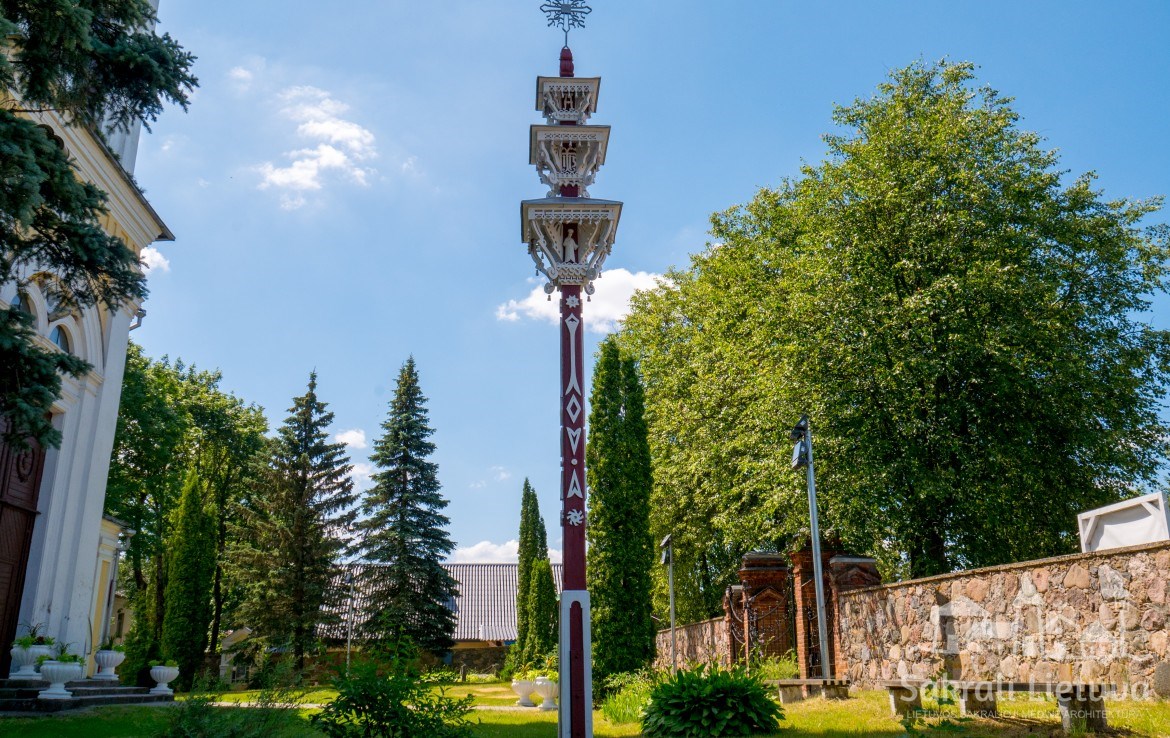 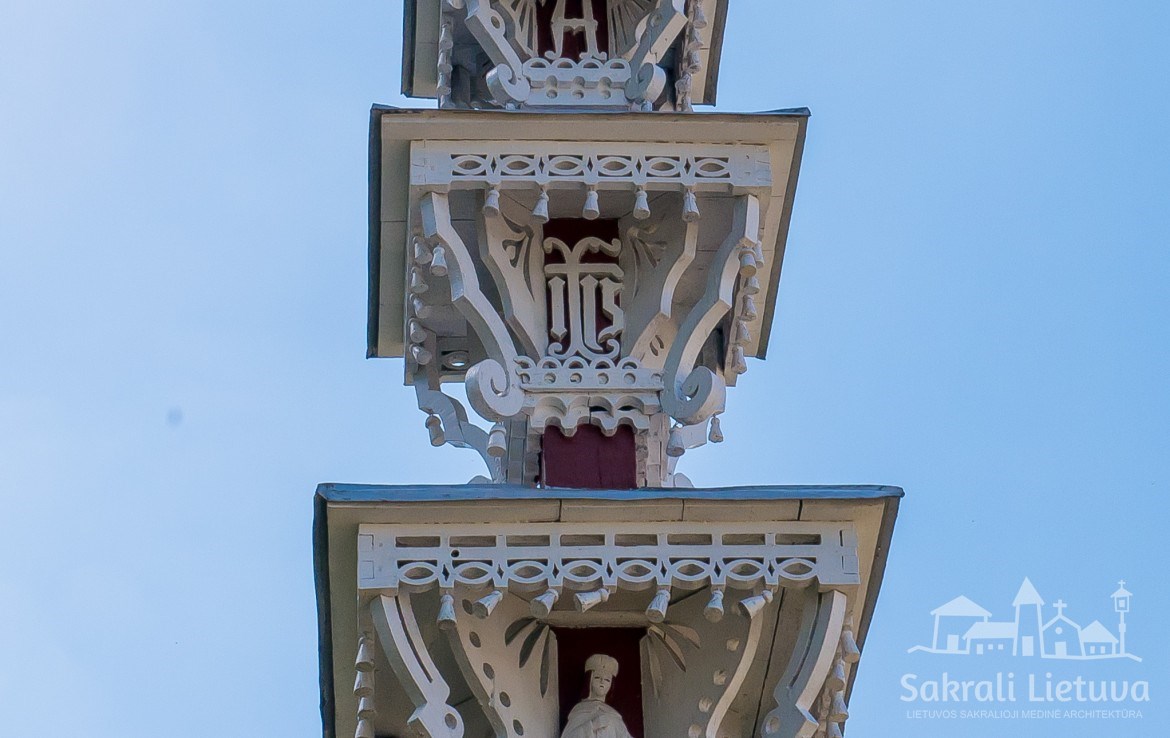 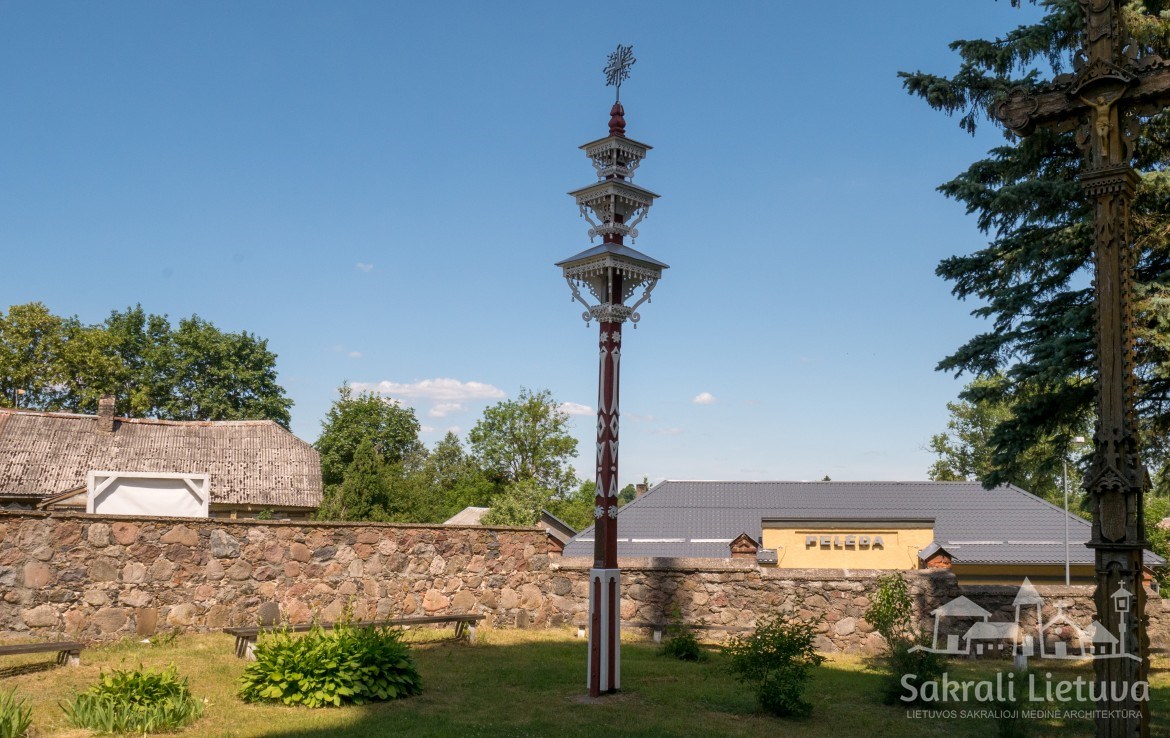 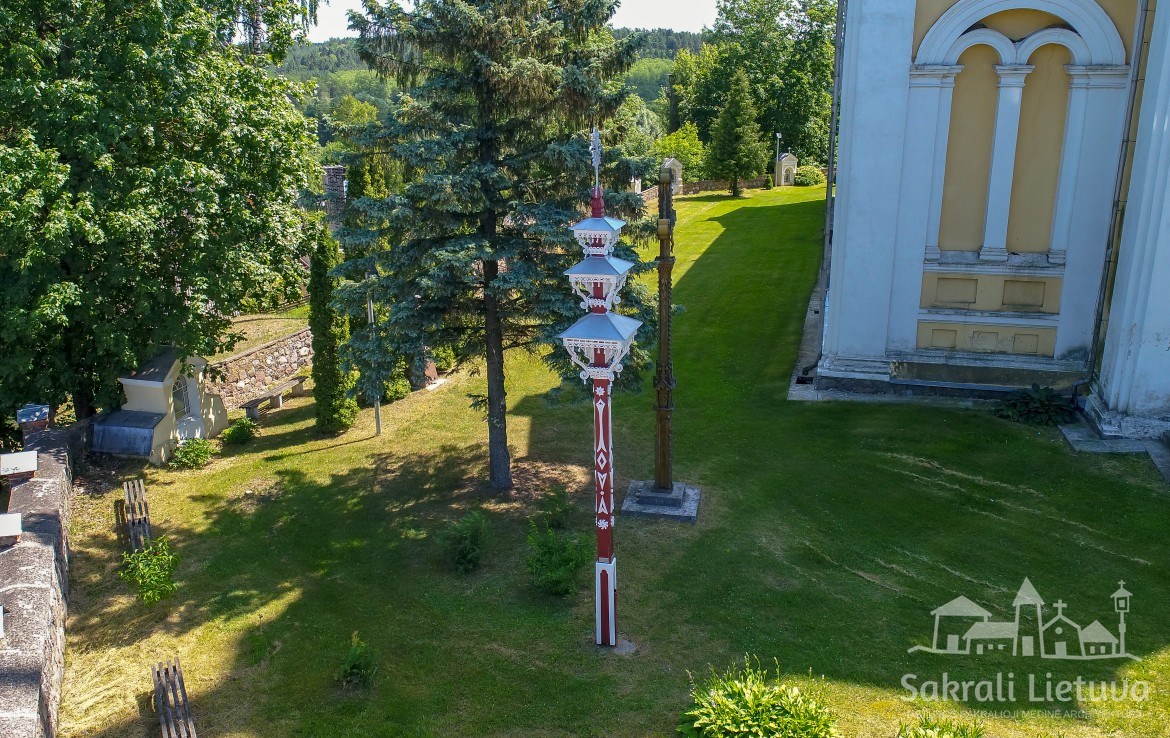 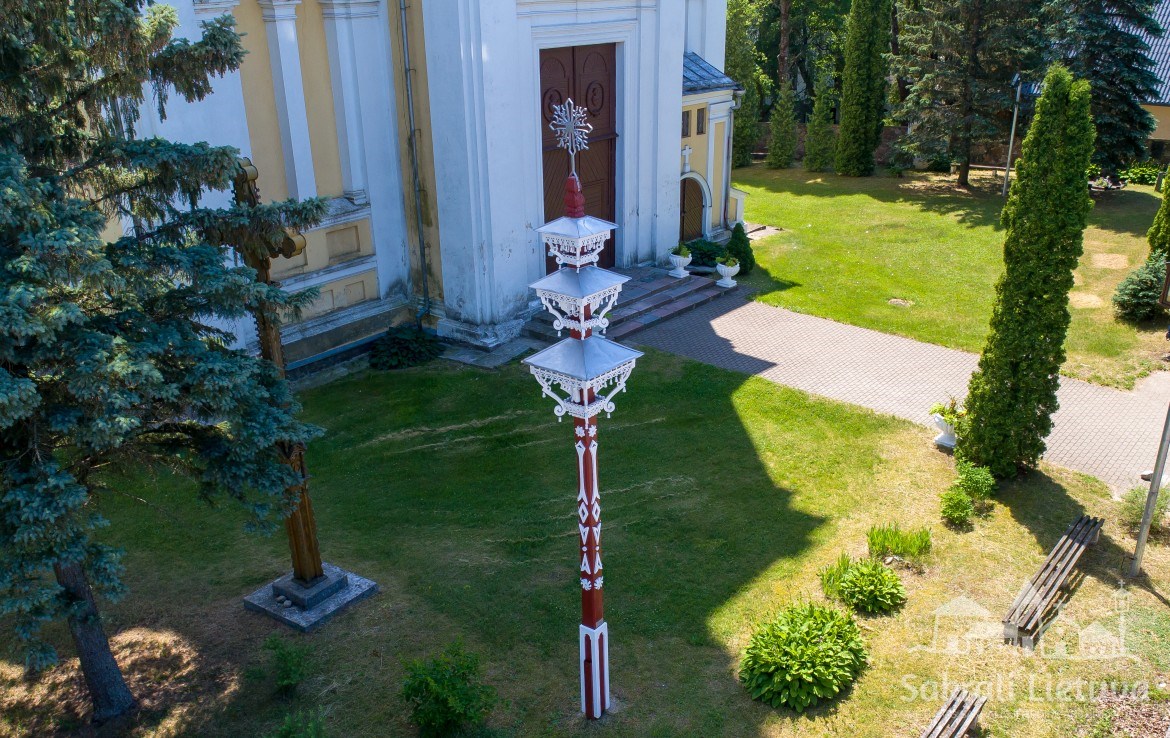