Skudutiškis Church of the Holy Trinity

The origin of Skudutiškis church is surrounded by legends. People speak of a large stone with a print of a human foot and the beads of a rosary, which stood on the shore of a rivulet that used to flow through the settlement. Because of these marks people thought that the stone was miraculous. According to a legend, a painting of the Blessed Virgin Mary appeared on the stone during the plaque – it was namely her, who left the trace of her feet and rosary. People wanted to bring the image to the church of Molėtai, but nobody could take it off the stone. But there was a miracle – anyone, who touched the painting, was cured of the plaque. People brought the stone with the painting from the marshes to the village and built their first chapel on top.

At first, this chapel belonged to Alanta parish and later – the parish of Molėtai. The first chapel and the miraculous painting was destroyed during the fire in the early 18th c. Later the nobility funded the construction of a new church. One of the greatest contributors was Marcijonas Bronišas Boškovskis of Ukmergė Land Court. Later the chapel was increased, its interior was painted and Sokolovska, the wife of the prefect of Courland castle, donated a copy of the miraculous painting.

The chapel was wooden, had no belfries – only a balcony for reading sermons. 1922 marked the establishment of a parish in Skudutiškis and a newly-transferred young and proactive priest S. Čelkus initiated the construction of a new and large church. The new church was built in 1939, according to a project of the engineer Juozas Matusevičius.

The church is characterised by complex and unique architecture, featuring details of historicism and modernism on the exterior. The rectangular building has a triple apse, and a widened front and transept. The church has an unusual structure with three towers, the façades feature characteristics of modernised Gothic and the protruded central part of the middle façade blends with the belfry, framed by two smaller towers. The bells have been put into the belfry of the church and the three-storey belfry in the churchyard is not used any more. Above the front door there is a multi-angled decorative window and there are two more smaller rectangular windows in the belfry. The towers are finished with small triangular pediments, pointed tin roofs and simple, geometric undecorated crosses. The façades are covered with horizontal panels with horizontal cornices to divide the planes.

The interior of the church is decorated by several valuable pieces of art: there is a 17th c. picture of Our Lady of Sorrows, painted on a board, brought here from an unknown church. There is also another, particularly admired by the local congregation – a painting of the Mother of God with a sword in her chest, dating back to the early 18th c. The great altar is decorated with 17th c. carvings – sculptures of the apostles St Peter and St Paul, and openwork wings of the second section. Parson Alfonsas Šatas, who worked here in the 1970s, carved the folk art wings for the altars, furniture decorations and several crosses. 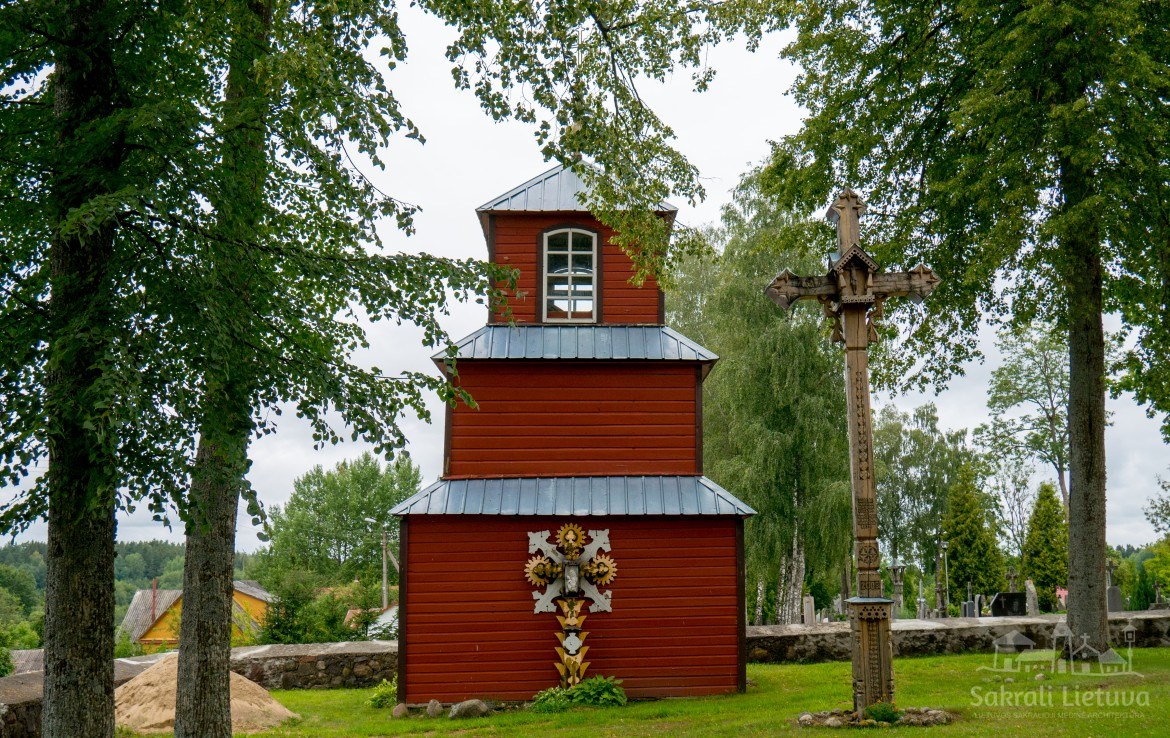 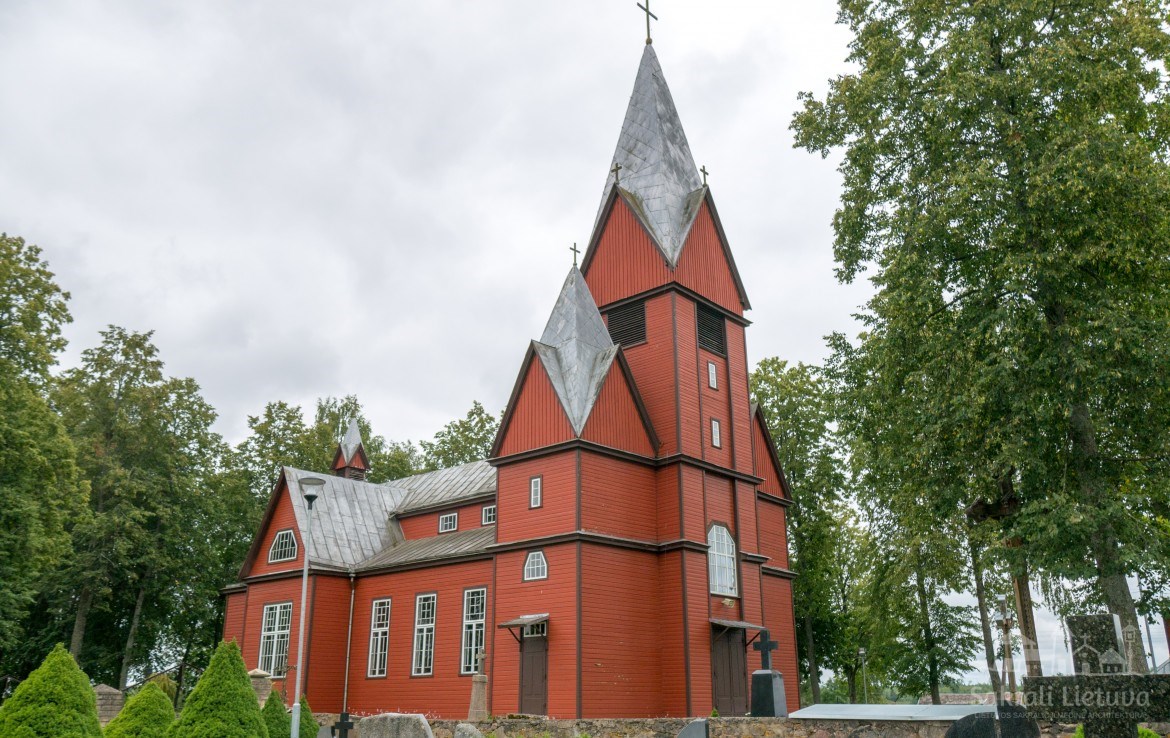 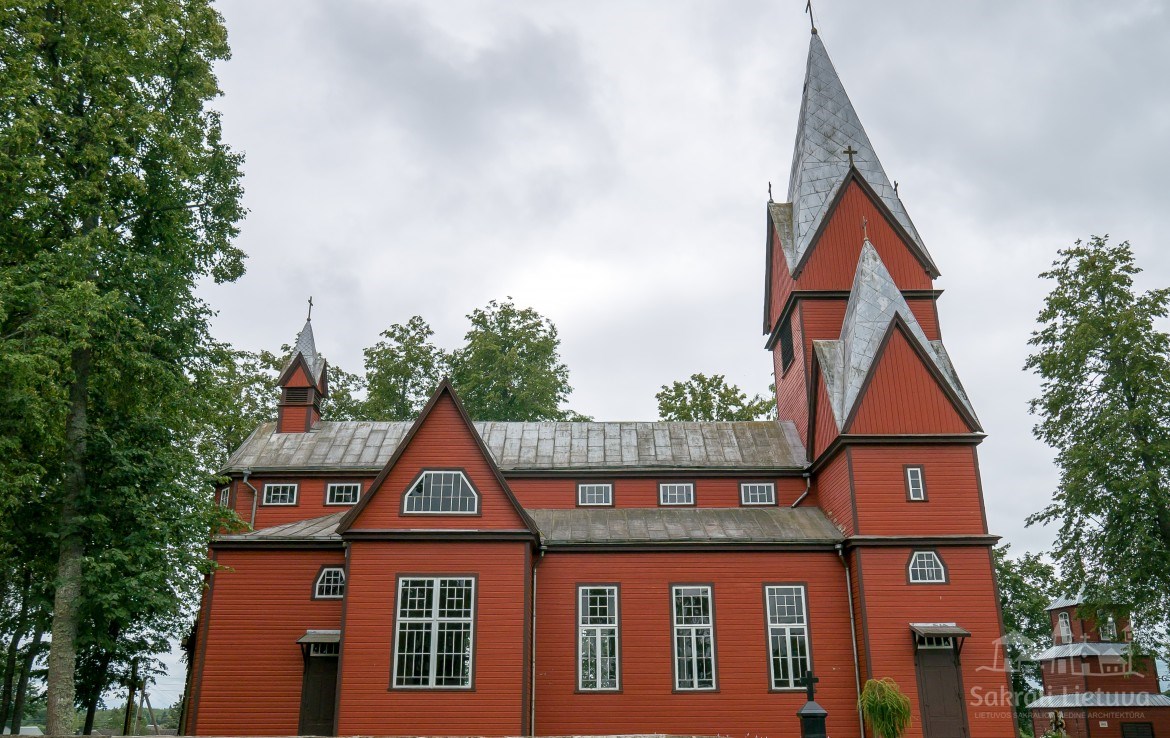 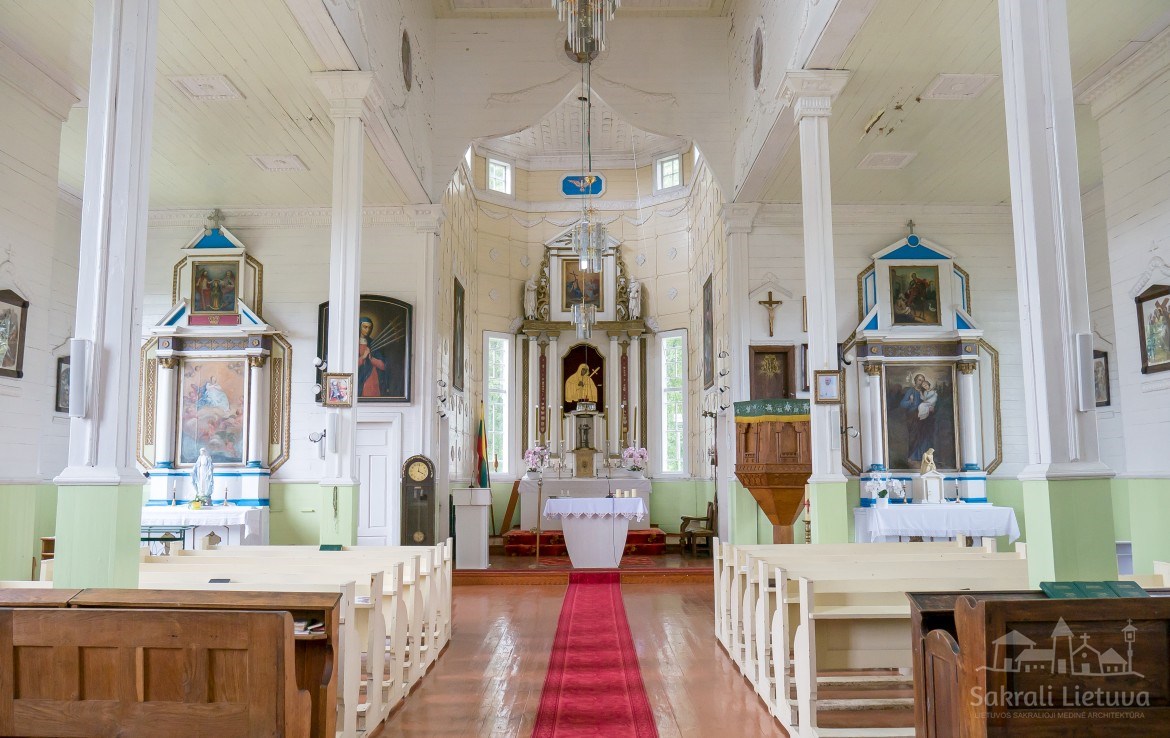 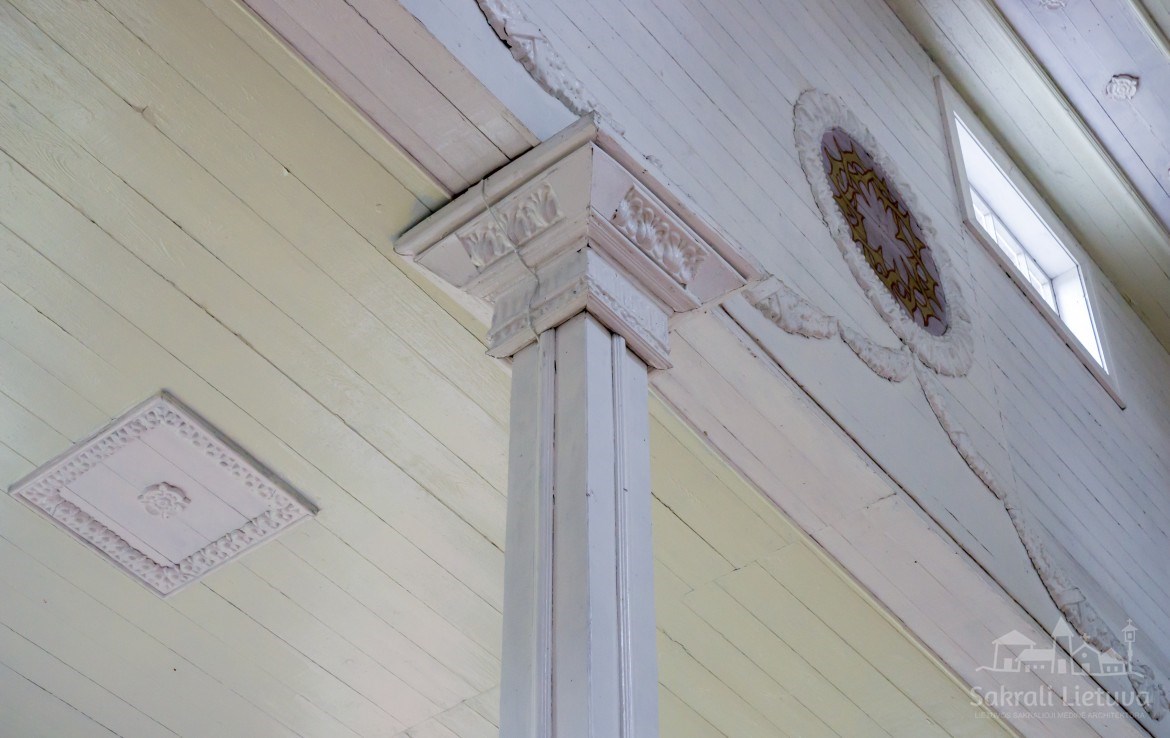 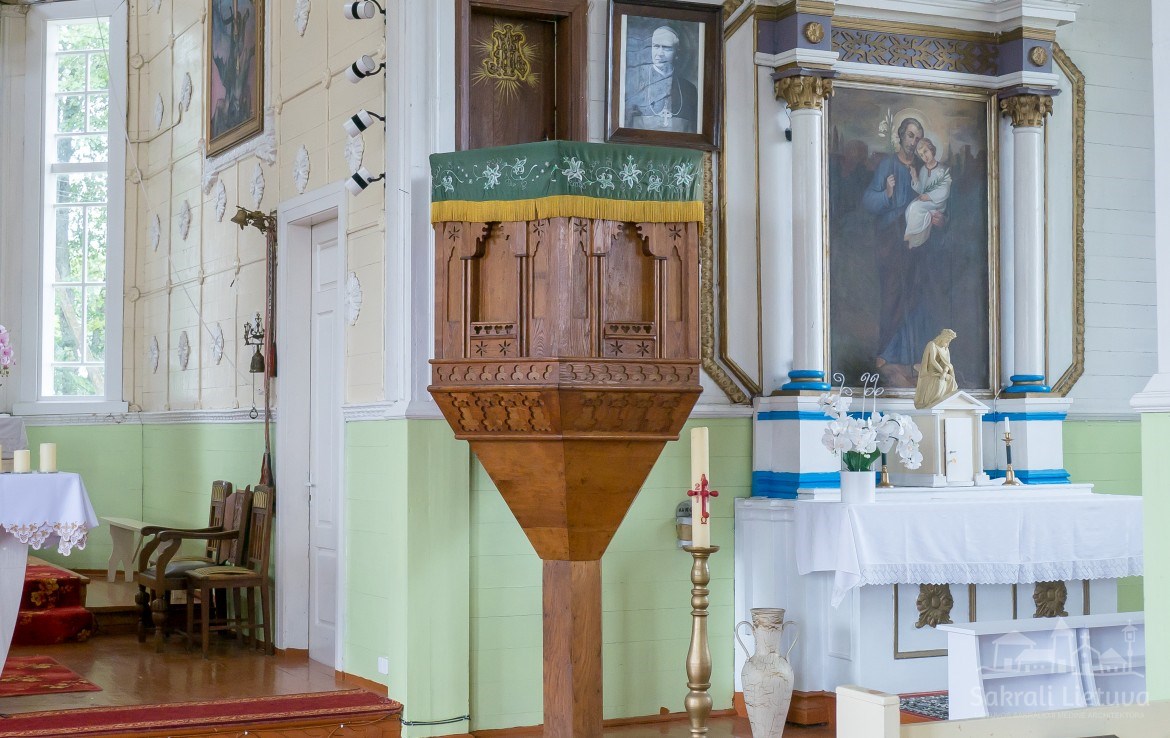 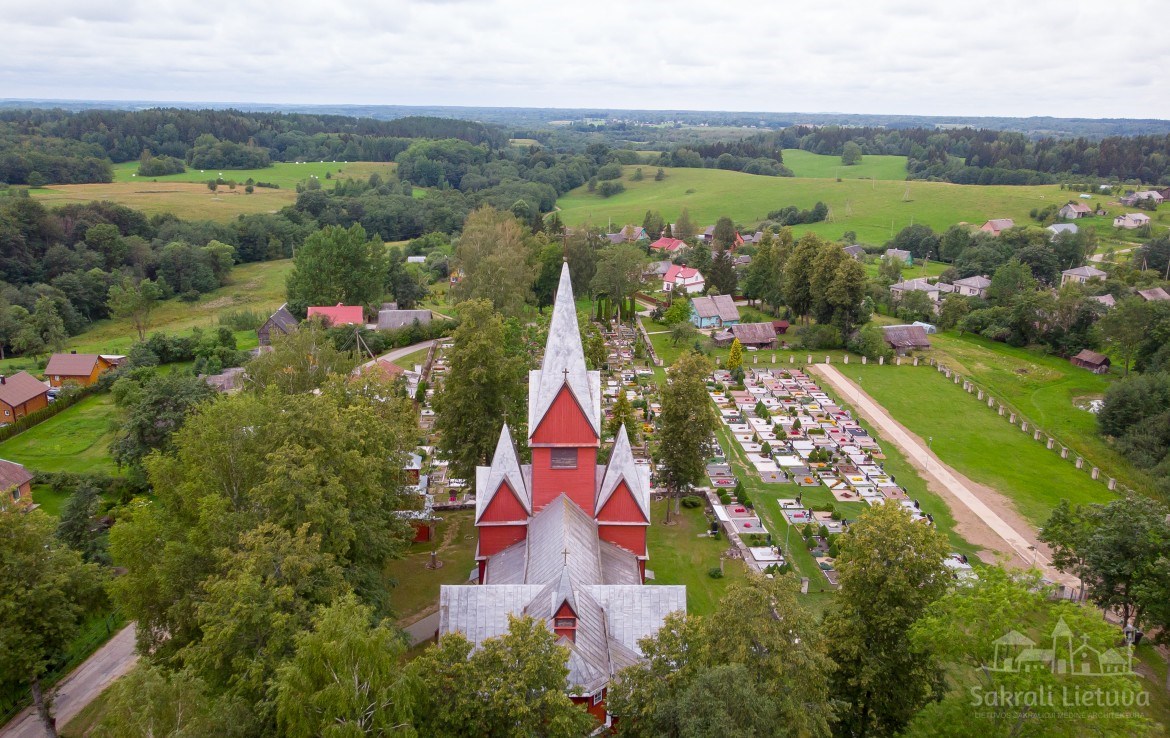 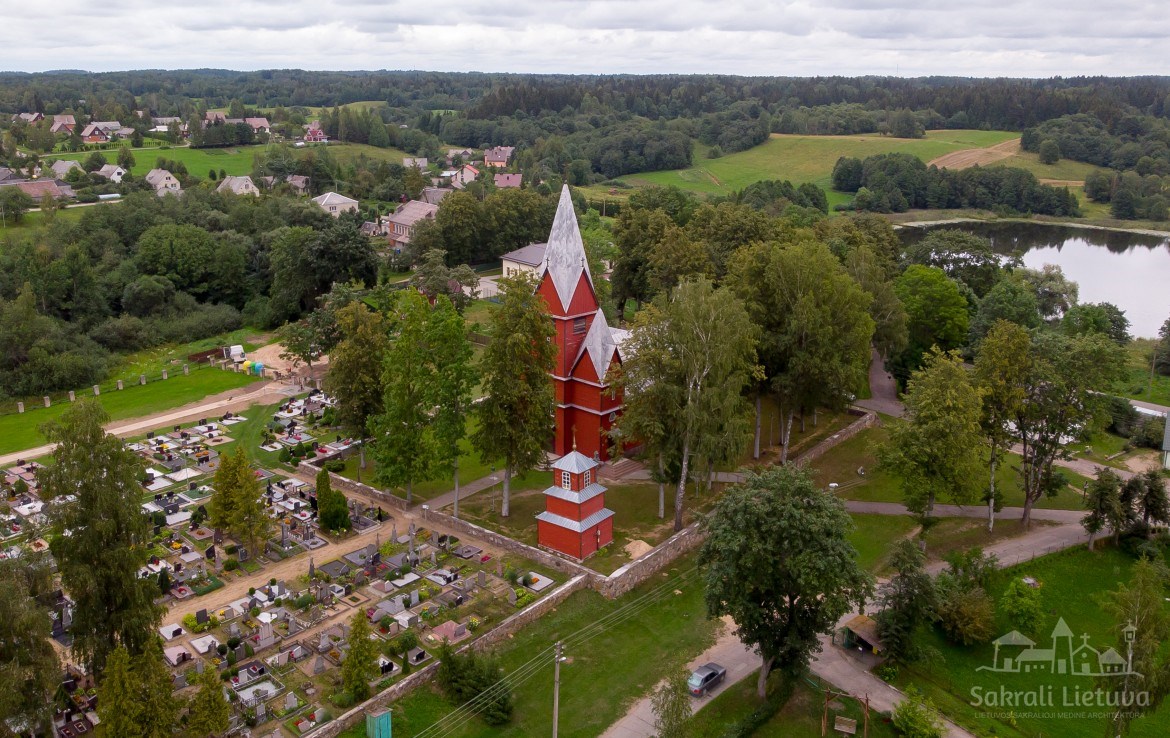 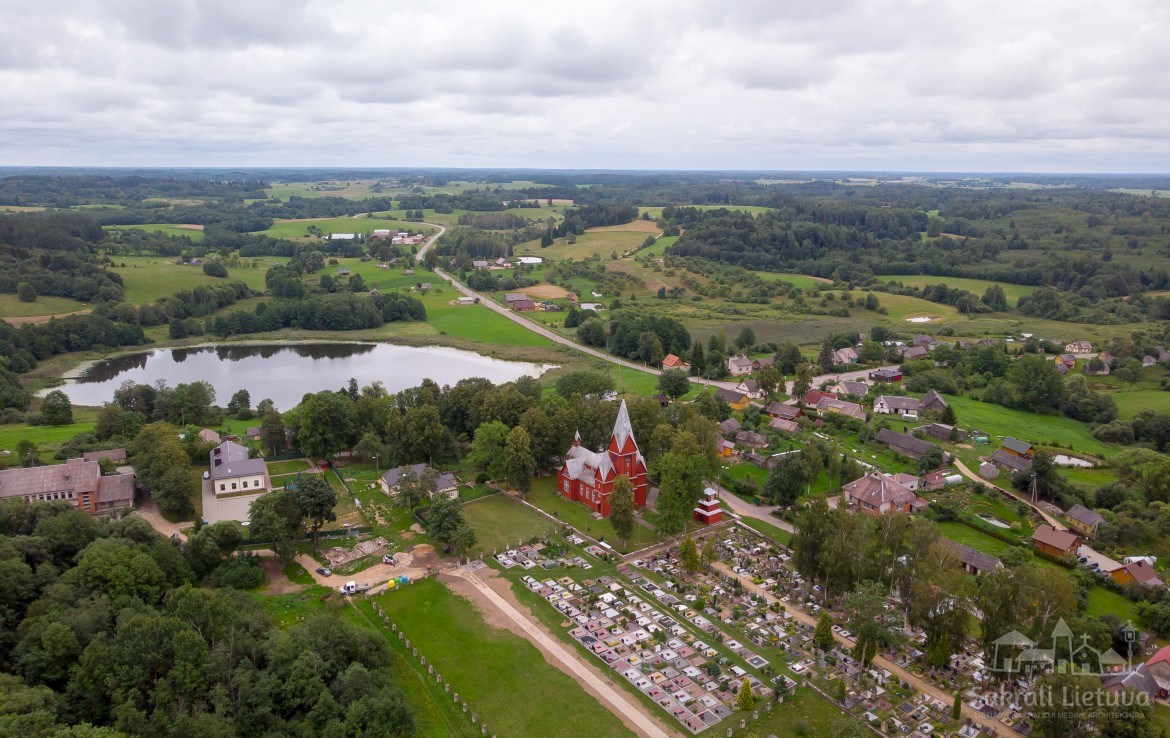 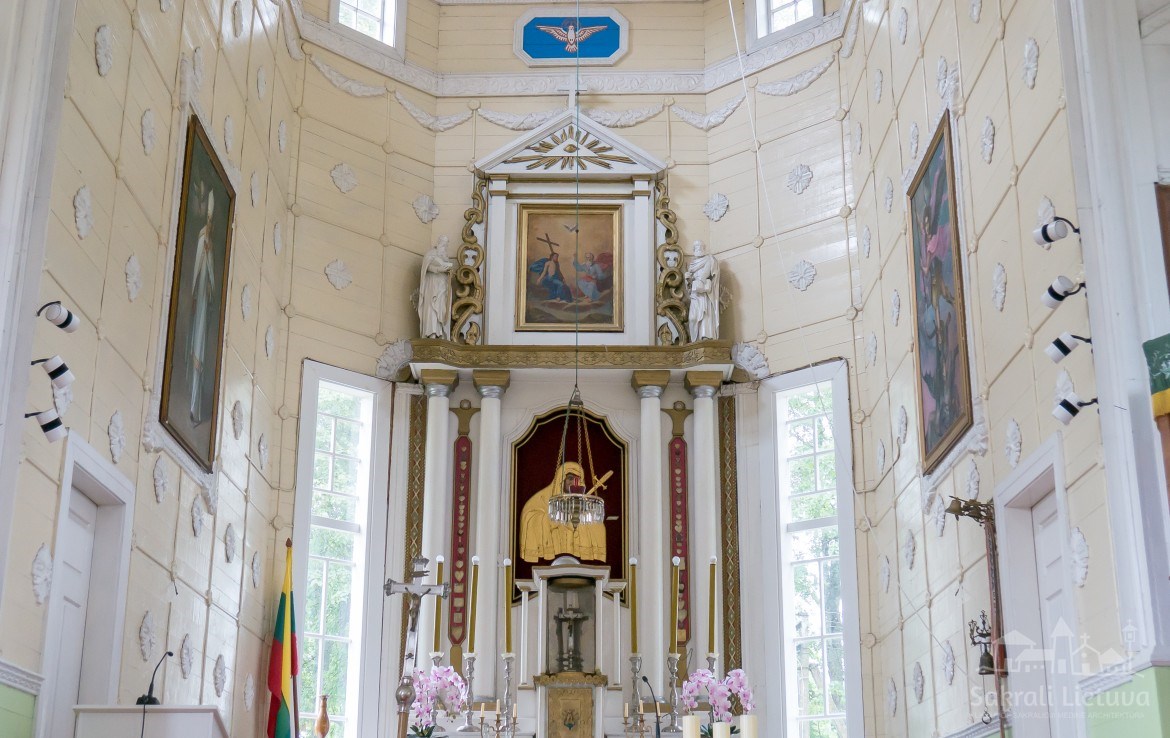 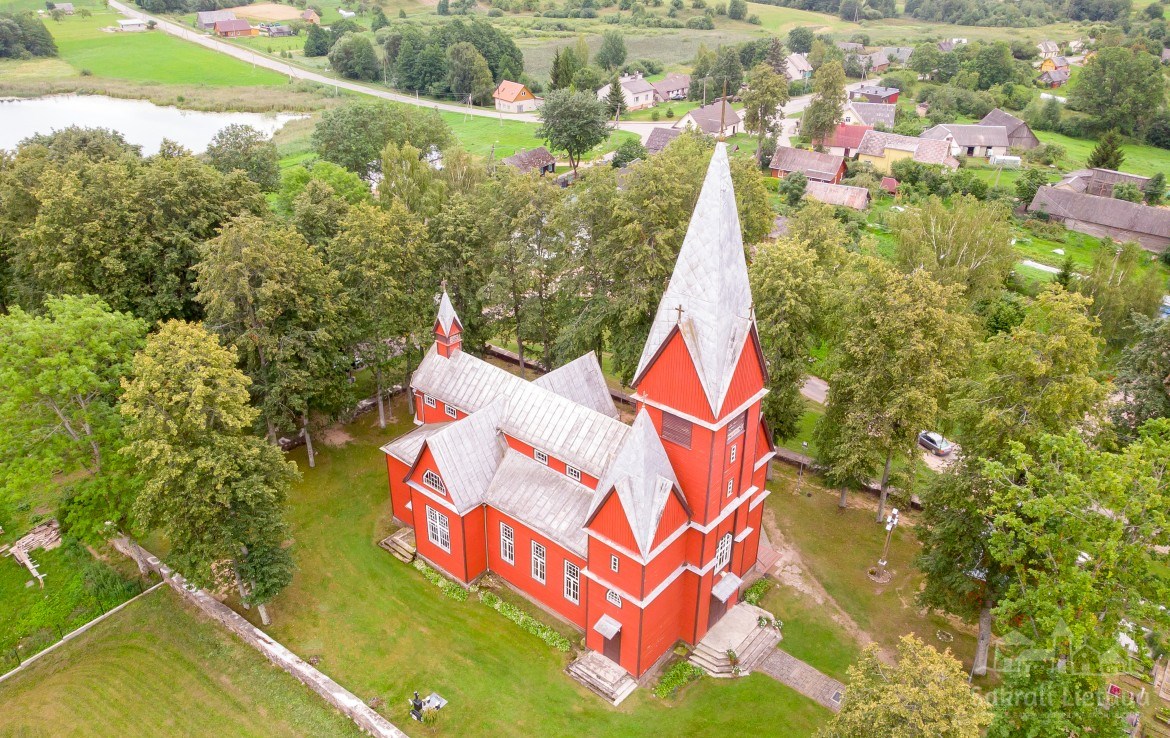 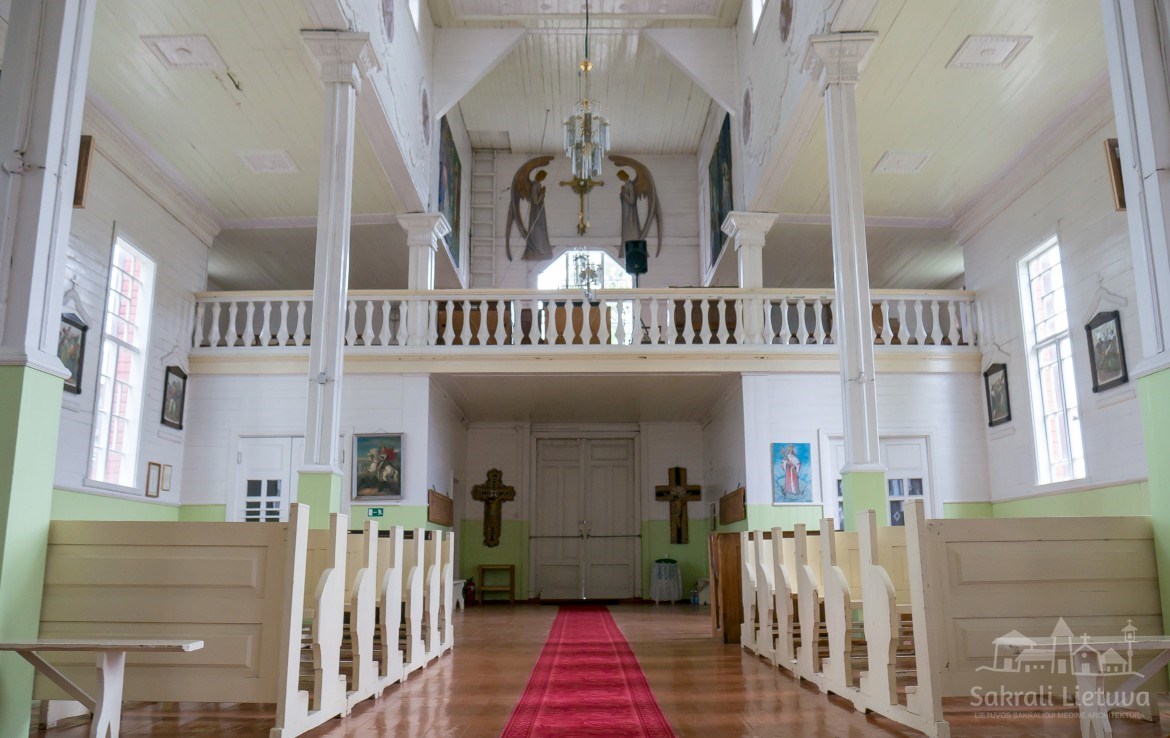