It is said that the first church in Rumšiškės was built in the early 15th c. by the King Jogaila. The origin of the church has an old legend, which says that the King Jogaila with his wife Queen Jadwiga and a company of clergymen travelled from Vilnius to Kaunas through Rumšiškės on a sleigh. It was an early spring. The royal sleigh broke the thin ice of the rivulet and nearly sunk. Jadwiga gave a promise to build a church there, should they escape to safety. And so they did. Jadwiga ordered the masters of Rumšišės to build a small wooden church on the hill, close to the dangerous place. The rivulet was called Nadzeja, which means ‘hope’ in Polish language.

The construction of the modern-day wooden church in Rumšiškės town dates back to the early 18th c., but the history of this building is very complicated. In 1700 Rumšiškės’ parson Samuelis Goligontas wrote that he, ‘an unworthy, sinful and poor priest, funded and constructed a church in the town of Rumšiškės, which is named after St Michael, the Blessed Virgin Mary and St George’. The new large church was designed according to folk architecture traditions that were deeply rooted in Lithuania.

In 1859-1860, the church of Rumšiškės had undergone capital renovations and had been partially reconstructed. In 1938, the building has been acknowledged as a valuable ancient monument, while in 1942 its interior has been decorated by the famous artist Vladas Didžiokas, who lived in Dovainonys, not far from Rumšiškės.

During the planning of the construction of Kaunas Hydroelectric Power Plant, the town of Rumšiškės, which situated in the lowland area of Nemunas, was supposed to be flooded and thus the wooden church and the 18th c. belfry behind were relocated into a new place – the upper terrace of Nemunas. The building had to be taken apart, transported and built anew. All elements were marked before the process. The works took place during the spring thaw, so no vehicle could drive up the steep and clayey hill. They had to take a detour, driving about 18 km instead of 200-250 m. During the relocation of the church, workers found the remains of a 17th c. nobleman with a wreath of precious metals. It could be that they are related to the invasion of the Tsarist Russia to Vilnius in 1655-1661 and could have been brought from Vilnius and hidden in Rumšiškės.

The church is an example of traditional eastern Lithuanian folk architecture. It is rectangular, has side sacristies, a five-side apse and a belfry. The high rectangular pediment is decorated with the Eye of Providence and above it there is a small Baroque turret. The inside hall is divided into three naves by two pairs of thick square pillars with high pedestals and capitals, decorated with grass-snake heads. The church has three neo-Baroque altars.
The belfry has three floors. Near the church there is a chapel of St Anthony and in the cemetery there is the chapel of St Anne. 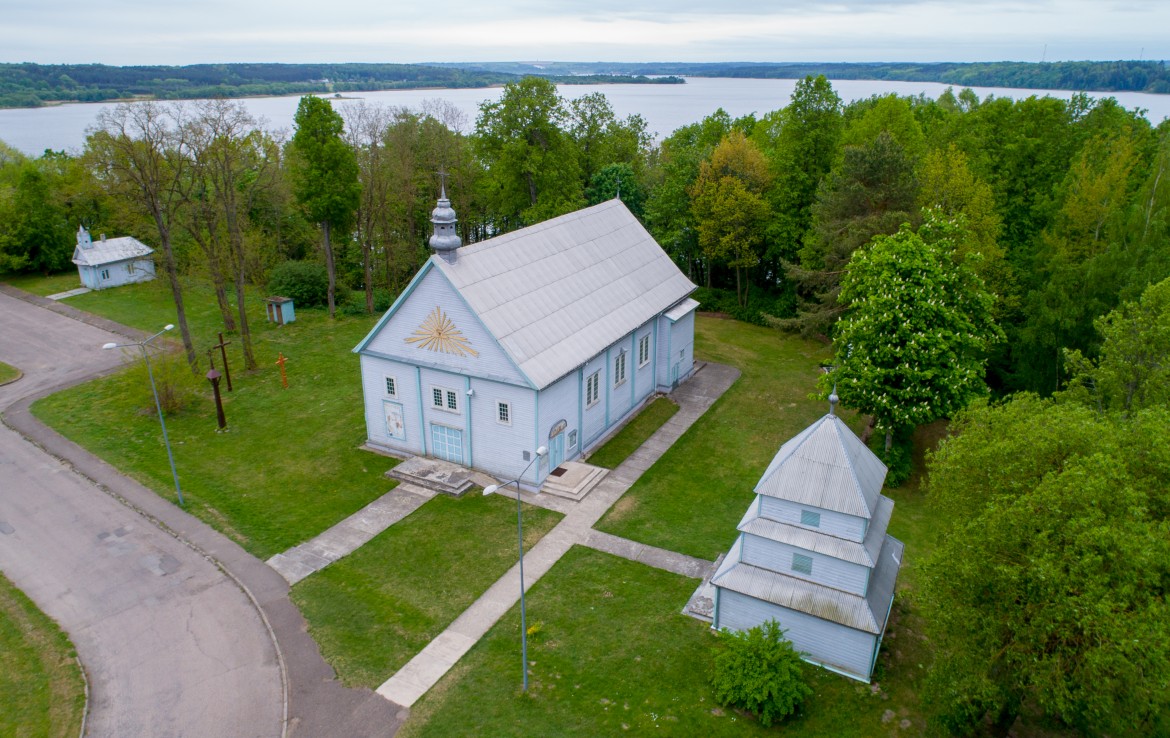 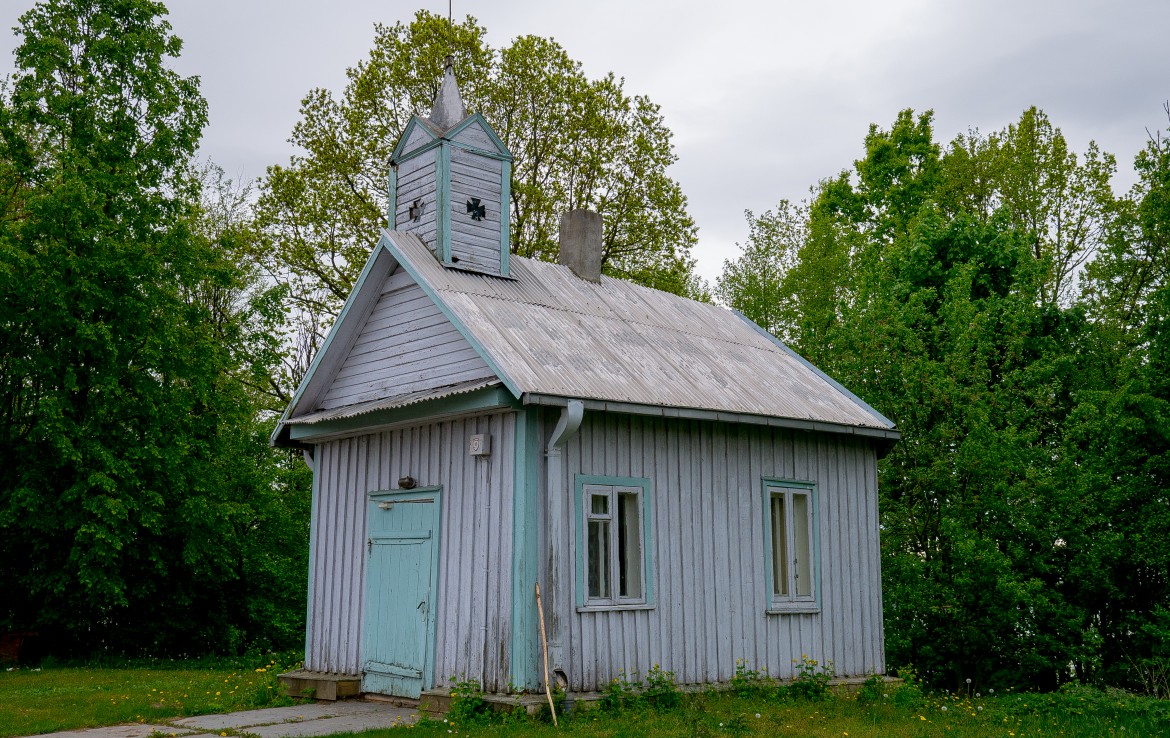 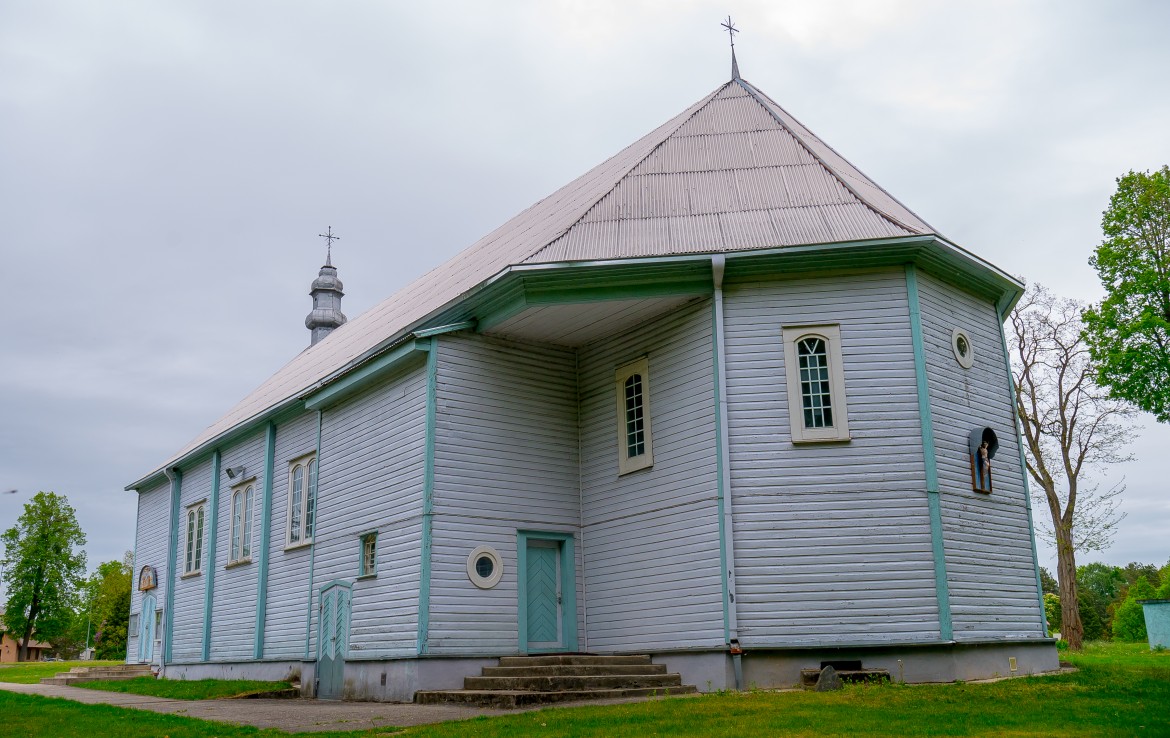 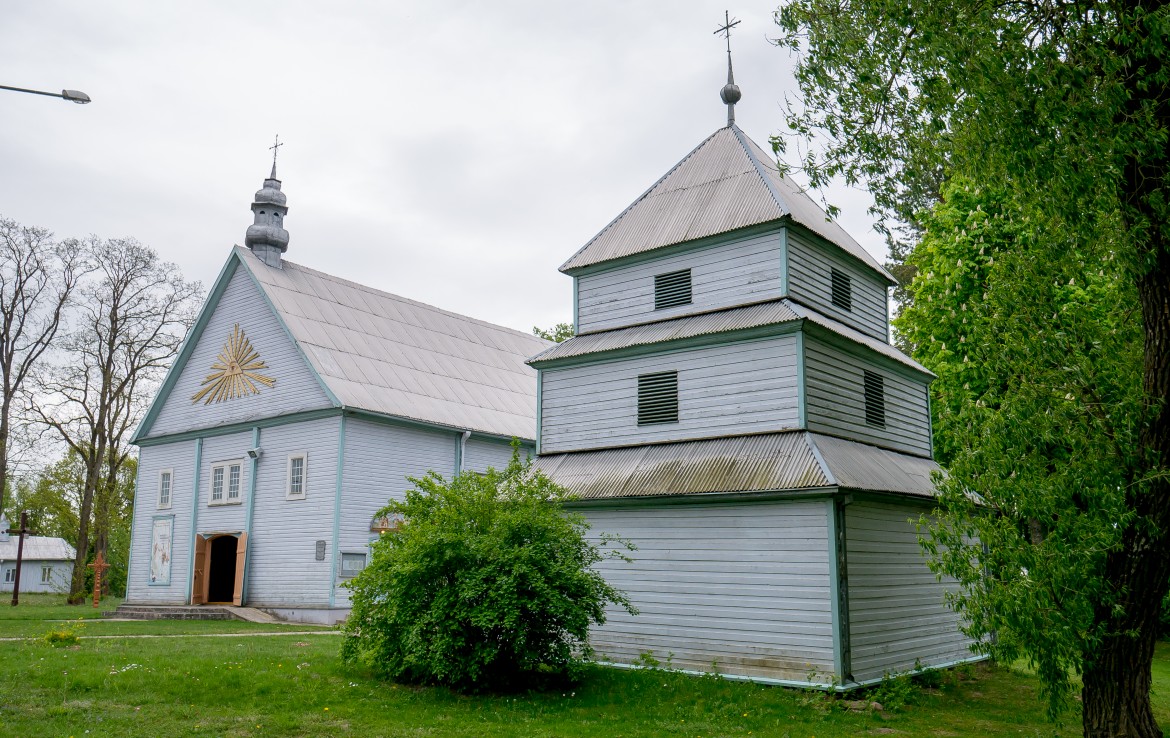 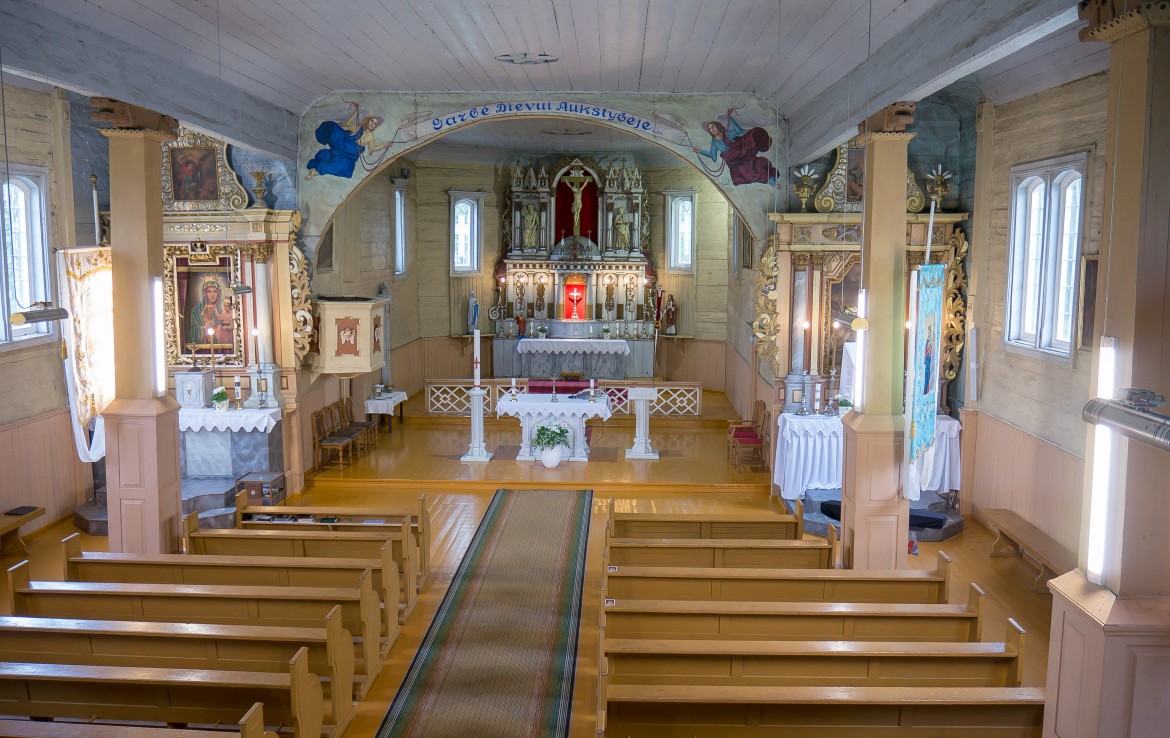 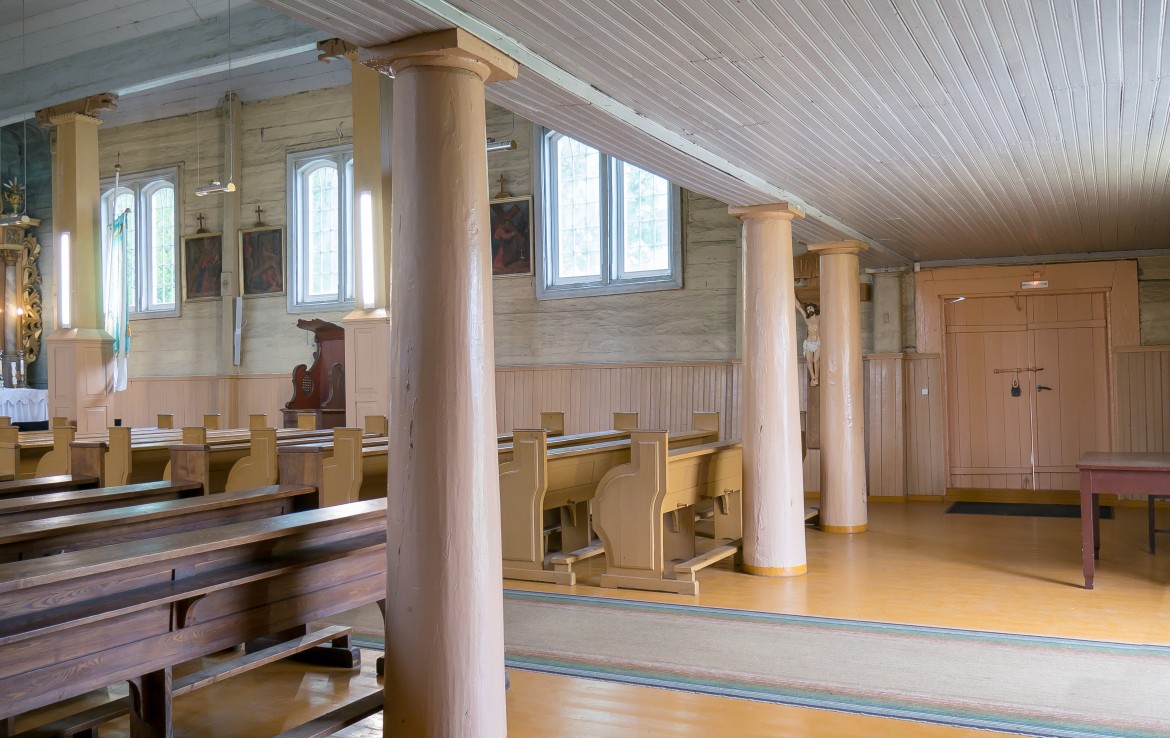 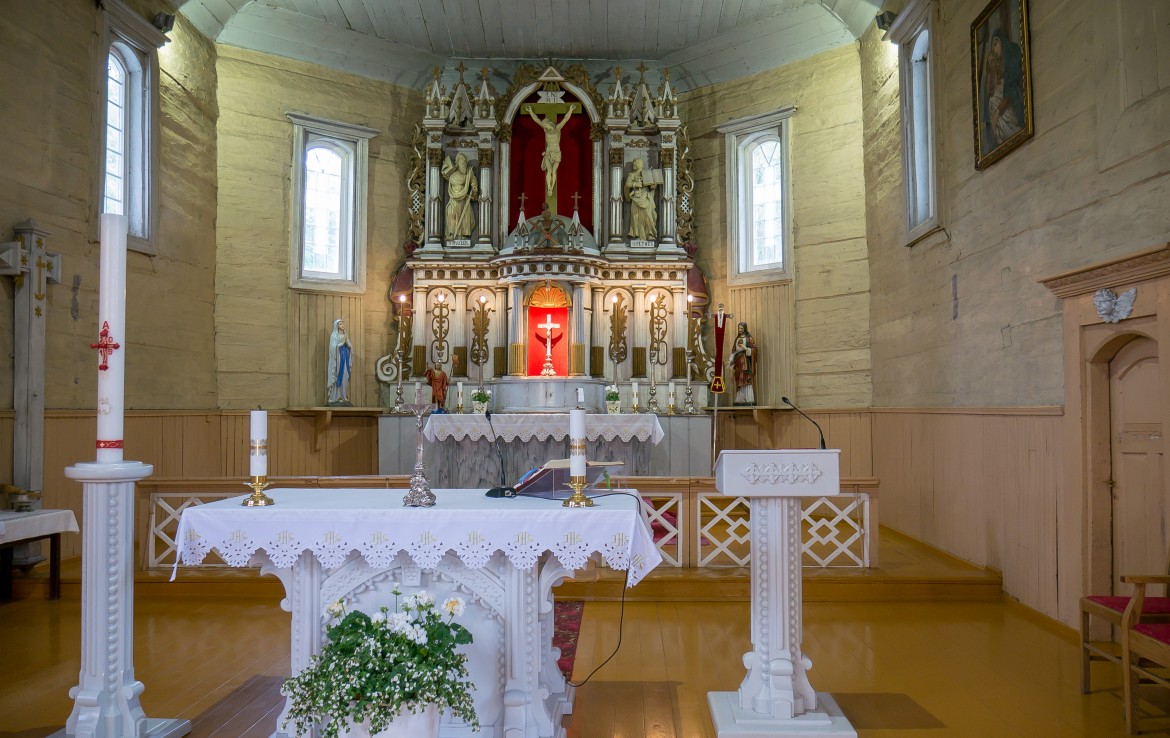 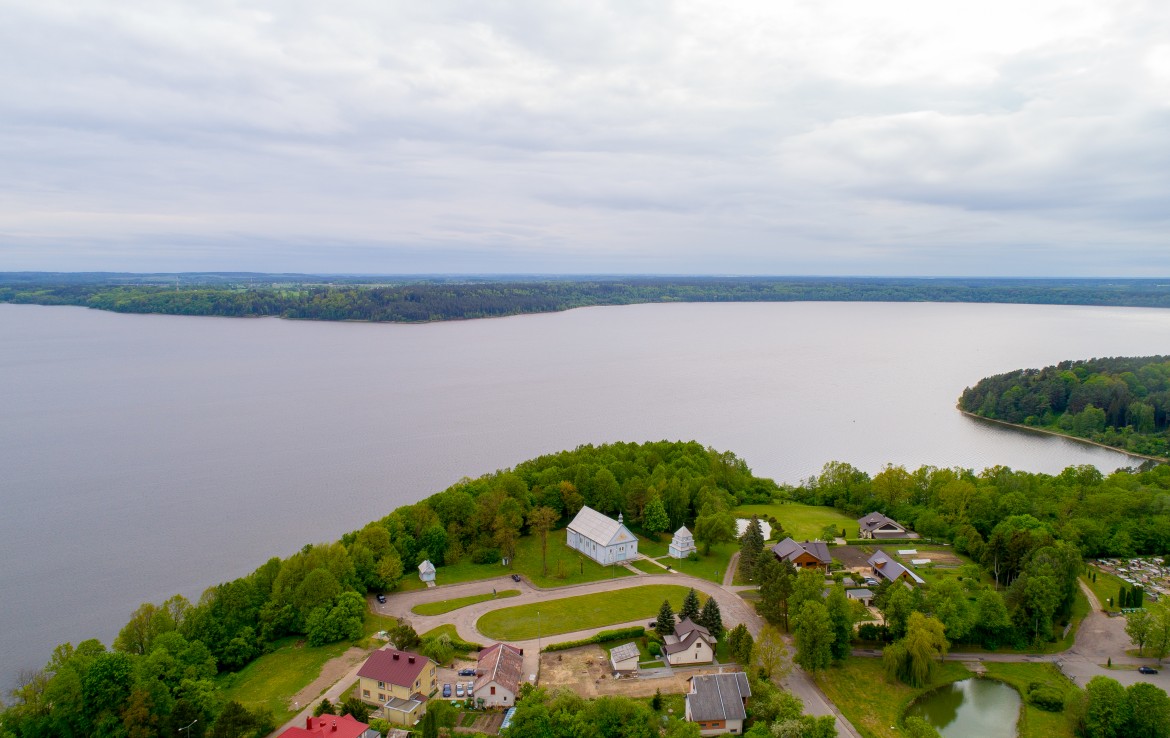 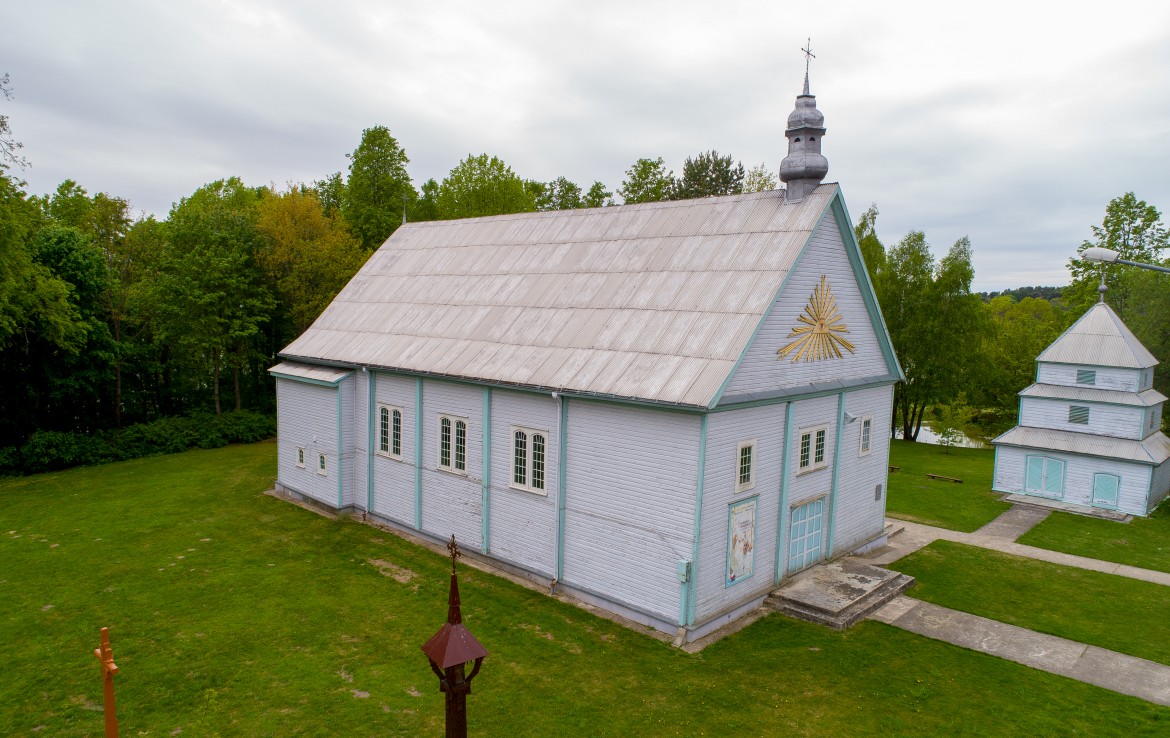 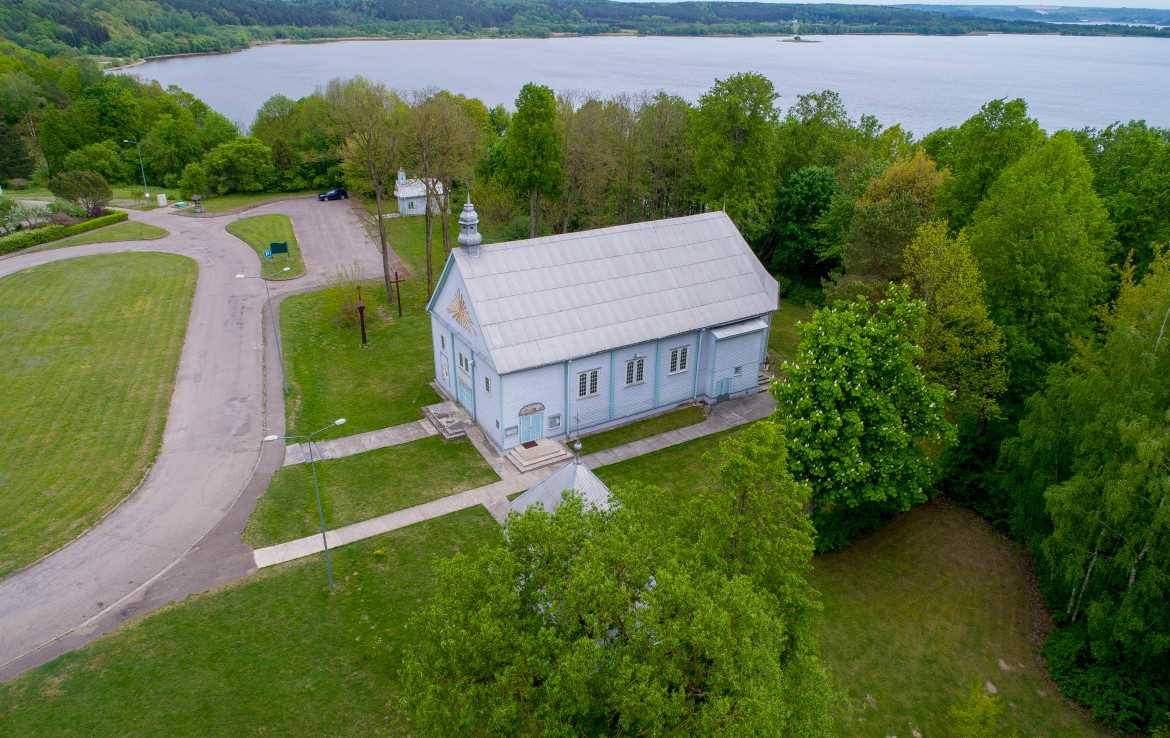