Pavilnys Church of Christ the King and Infant Jesus

The church of Pavilnys was built in 1935 and has been consecrated by the archbishop Romualdas Jalbžikovskis as the Church of Christ the King and the St Theresa of the Child Jesus in the same year. After World War II, the church was restored by the priest Konstantinas Molis . The church was built in the Polish Zakopane style, which used to be rather popular in Vilnius region during the interwar period.

The basilica triple nave church, built on a field stone masonry foundation, is rectangular, with a triple apse, finishing the presbytery that is lower than the main nave. The sacristy leans against the left nave, while the chapel – against the right. Above the front façade there is a massive rectangular belfry, which consists of three sections. The sections of the belfry are divided by notable, sectioned cornices. The middle section features open galleries. The third one is much smaller, decorated with appliqué decorations, crowned with a multi-sided, sectioned bell roof with an ornamented cross on top. The rooftop of the main nave is decorated with an open rectangular turret with a rectangular bell roof and an ornamented cross. The main volume is covered with a clerestory roof, while the apse – a three-sided roof. The roofs and canopies are covered with shingles. The middle nave in the front façade is slightly protruding, framed with an open entryway, supported on profiled columns with carved props. The triangular pediment of the façade features a bas-relief of St Christopher. The double front door is decorated with a rhombic pattern and a fanlight. The church windows are small rectangles with grated windows and trims. The apse features three tall stained glass window arches with a rose window in the middle. The panels and planks, covering the church are vertical, except for the chevron pediment.

The interior is lined with wood. The naves are separated by four square pillars . The organ balcony is fenced by a baluster. The great altar and the tabernacle is decorated with a crucifix statue, while the second section features the painting of the St Theresa of the Child Jesus. The side altar of St Joseph is decorated with a painting St Joseph. The altar of the chapel features the Blessed Virgin Mary, Mother of Mercy of the Gate of Dawn with a casing and a set of 154 vota. 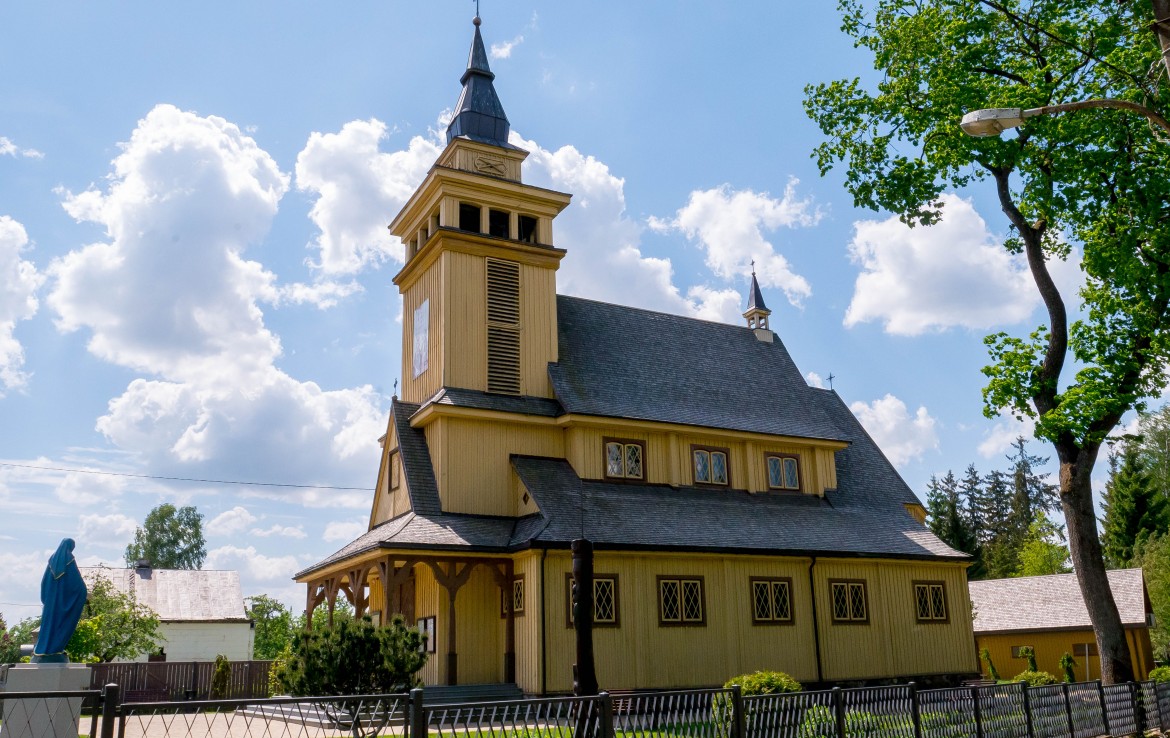 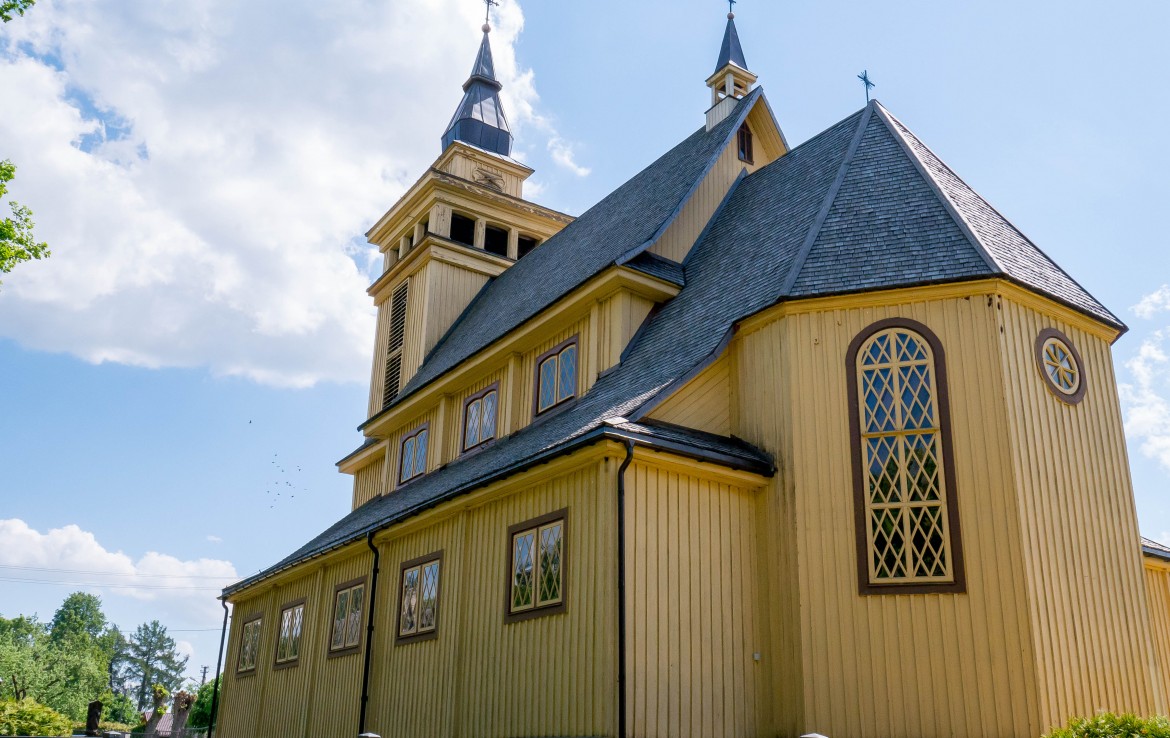 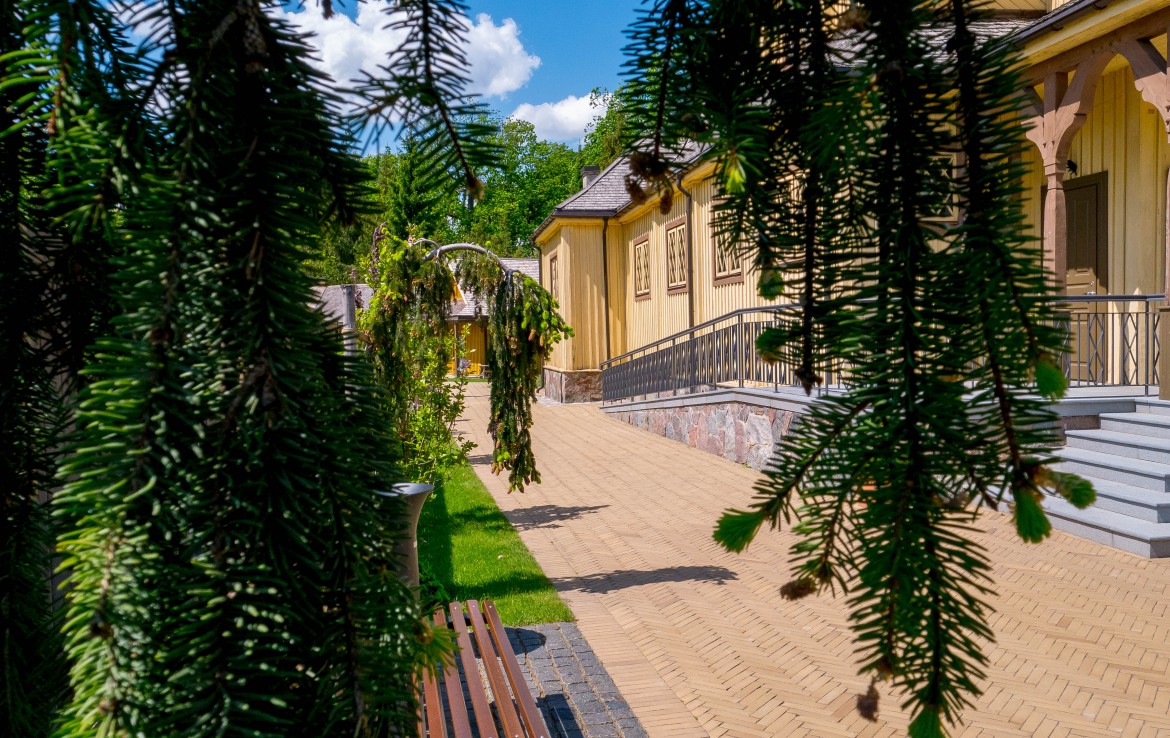 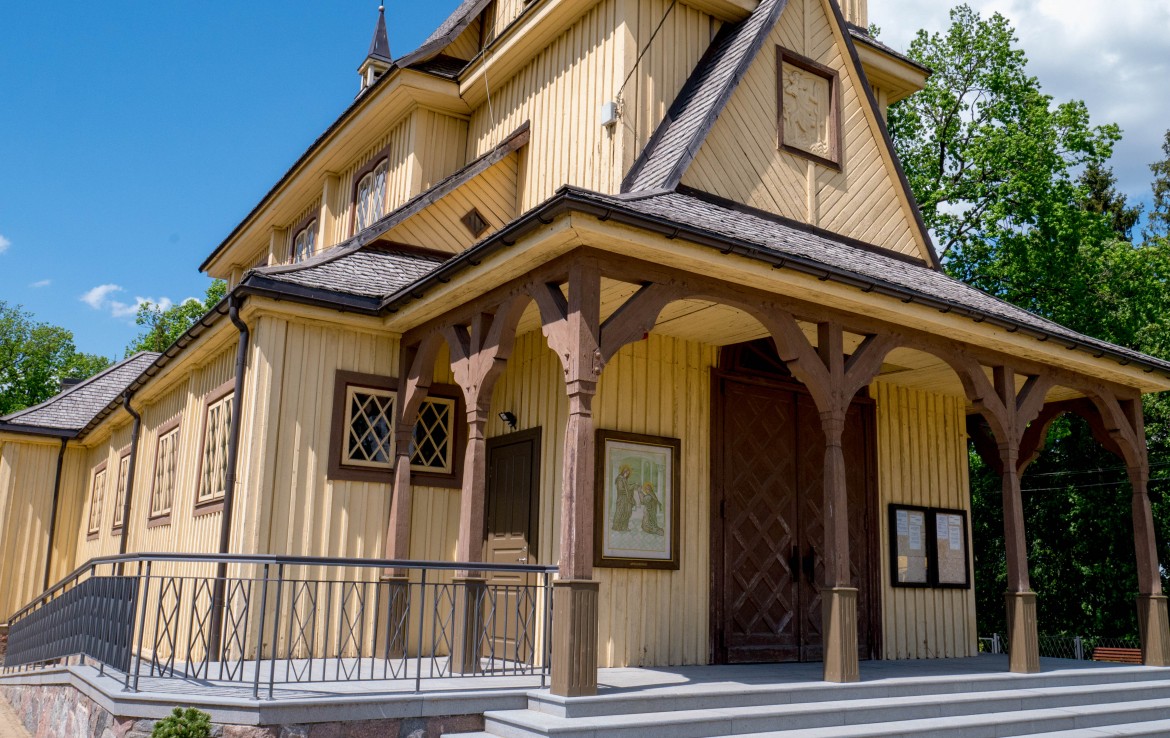 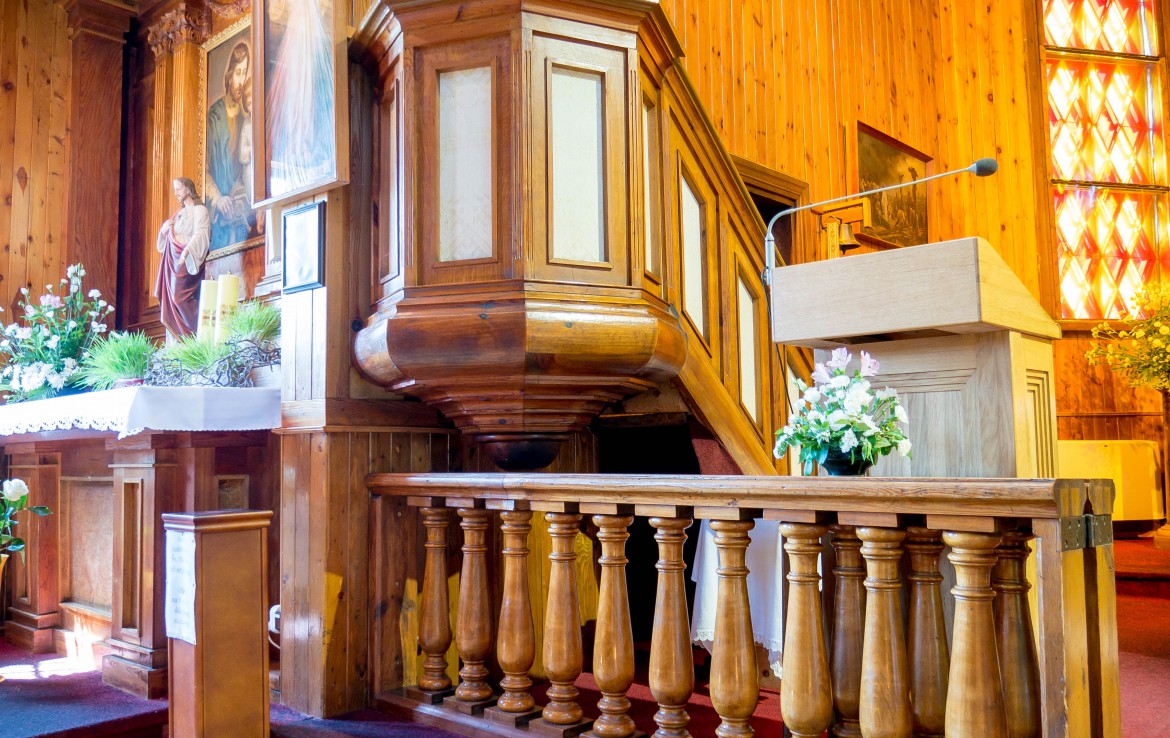 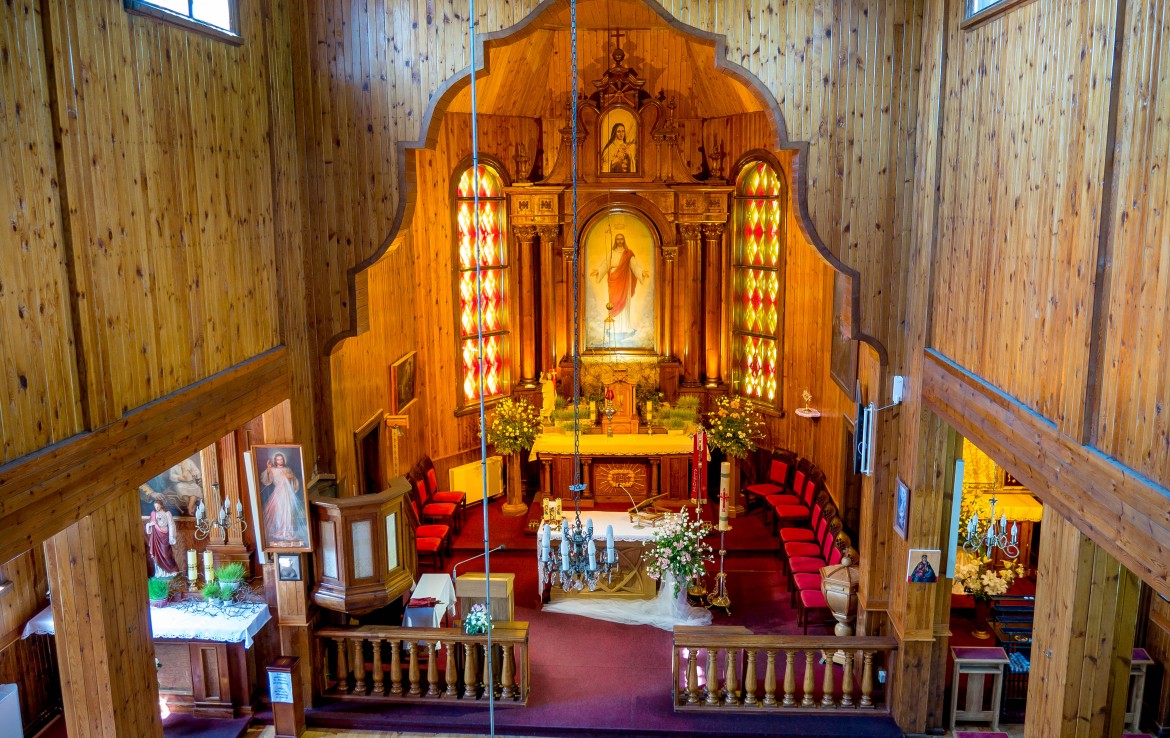 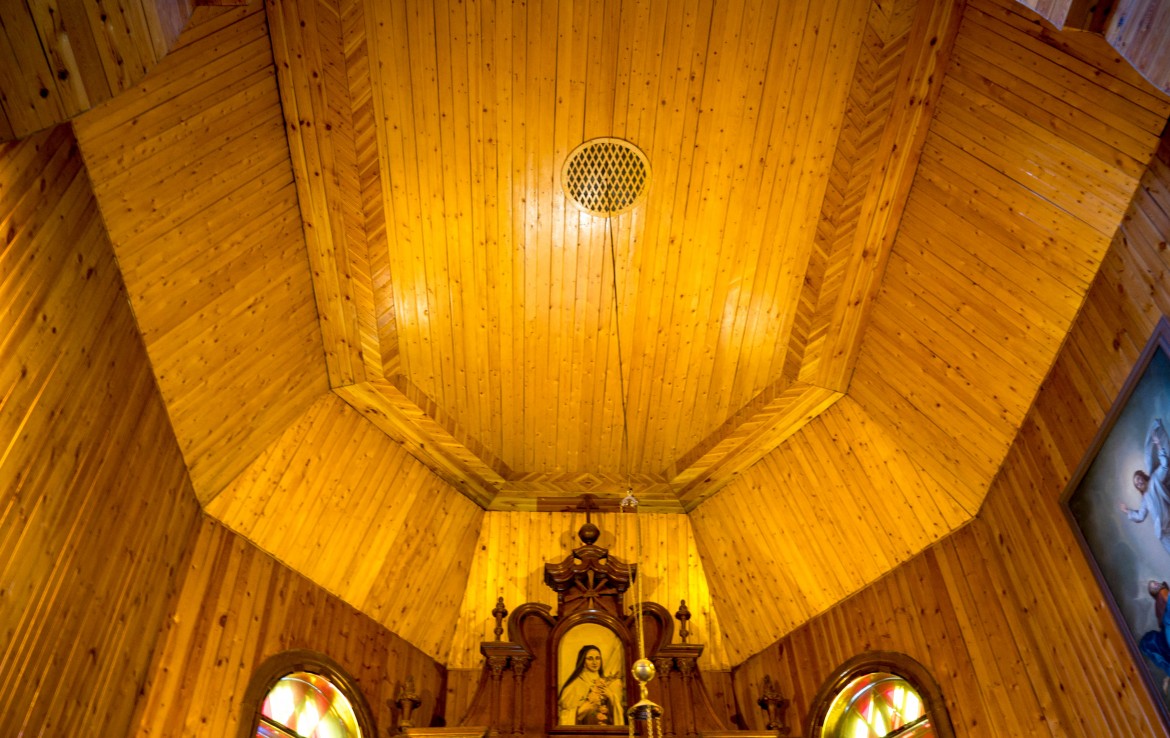 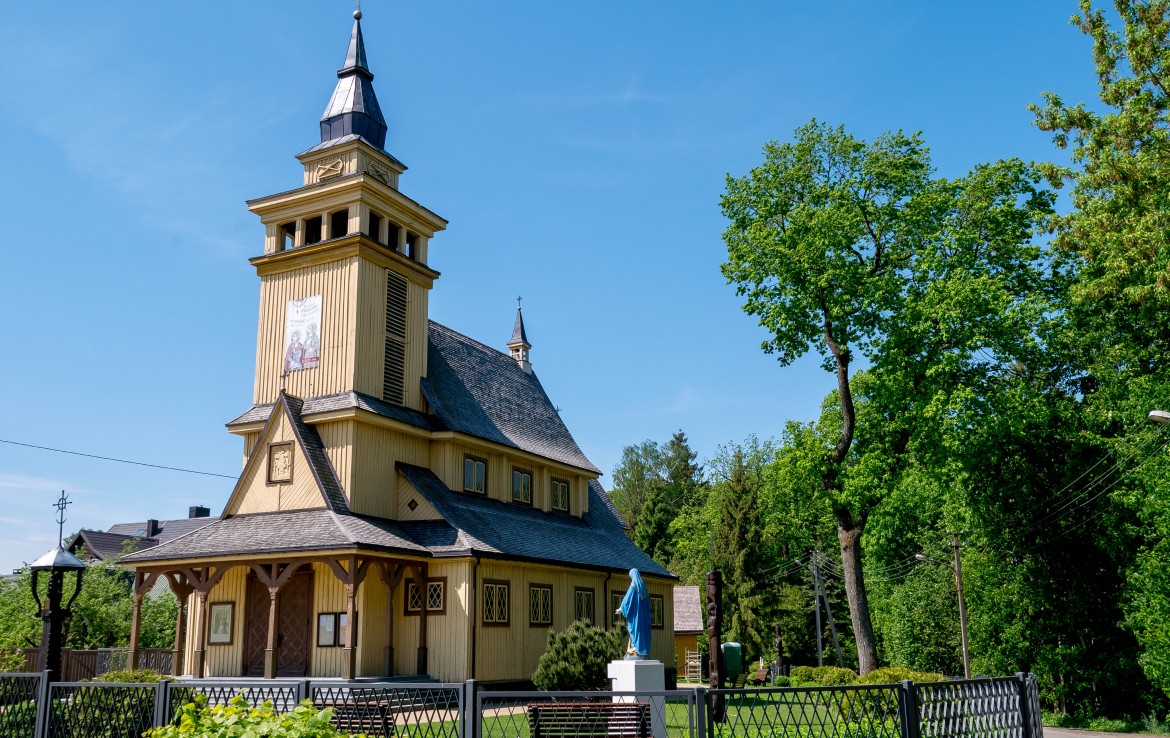 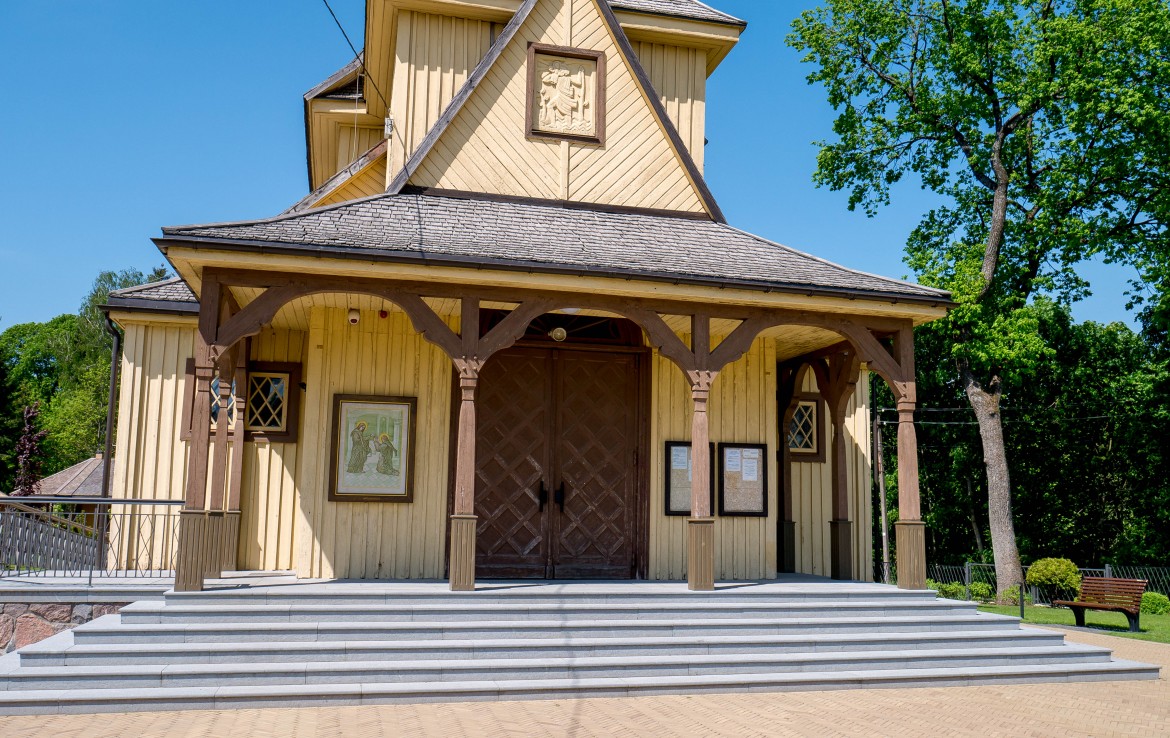 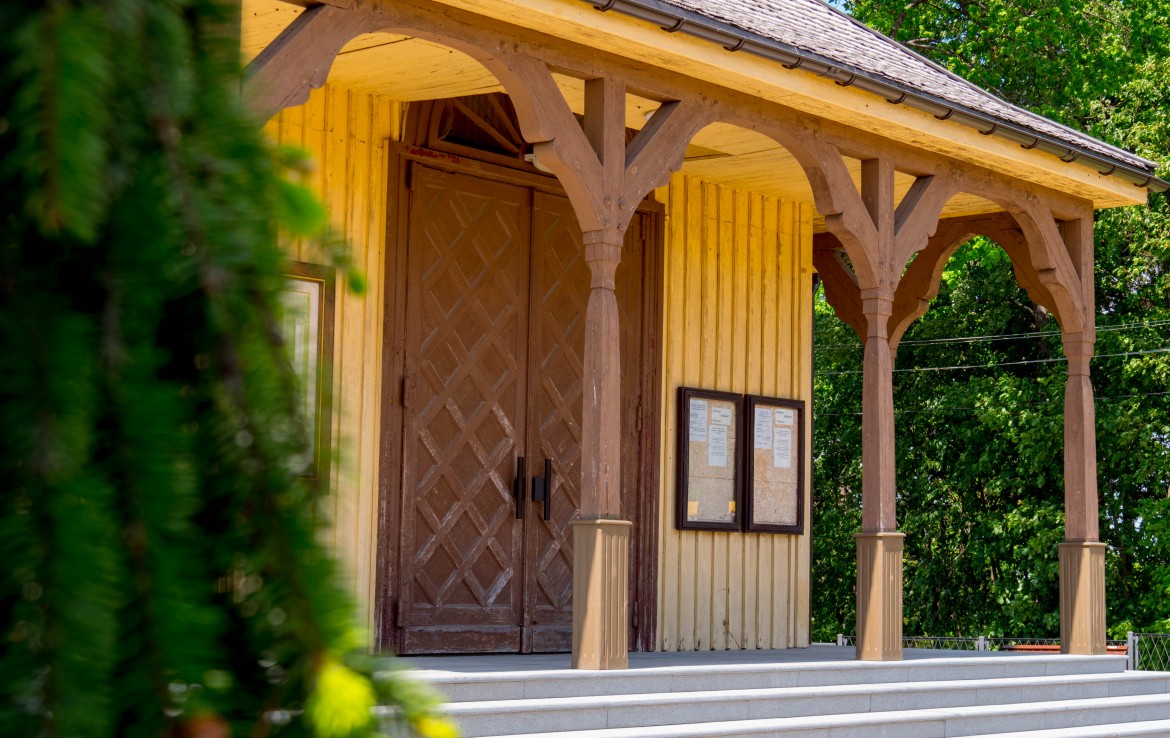 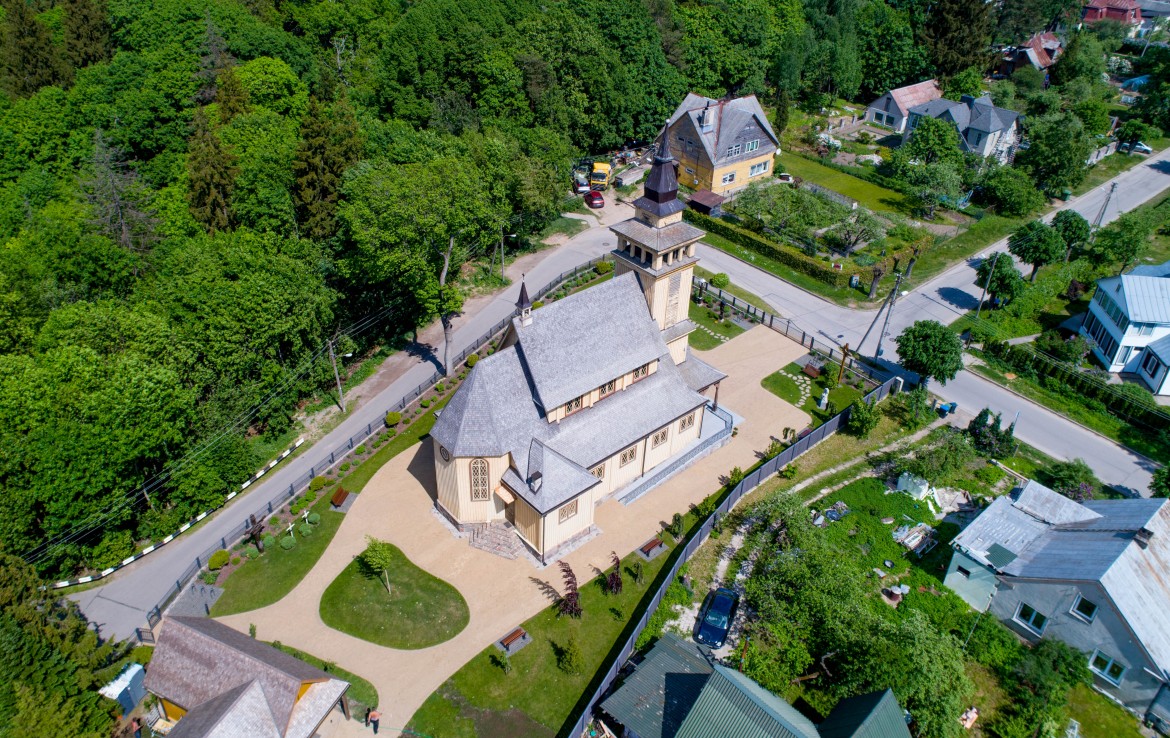 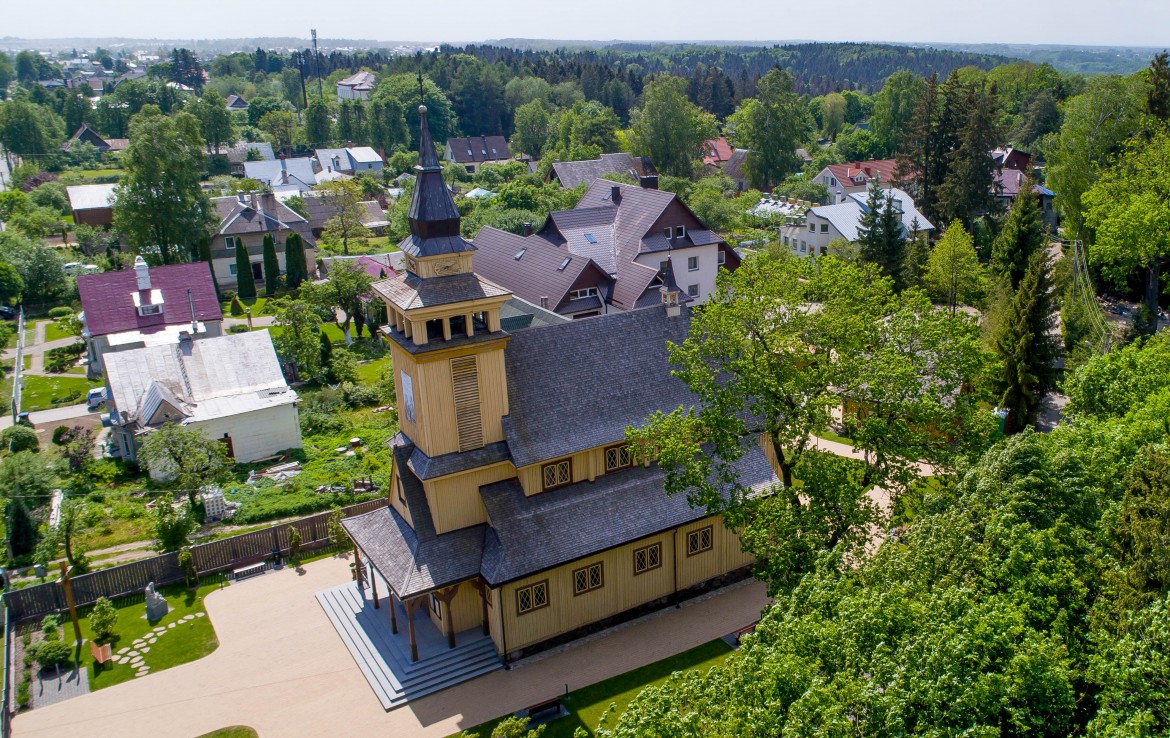 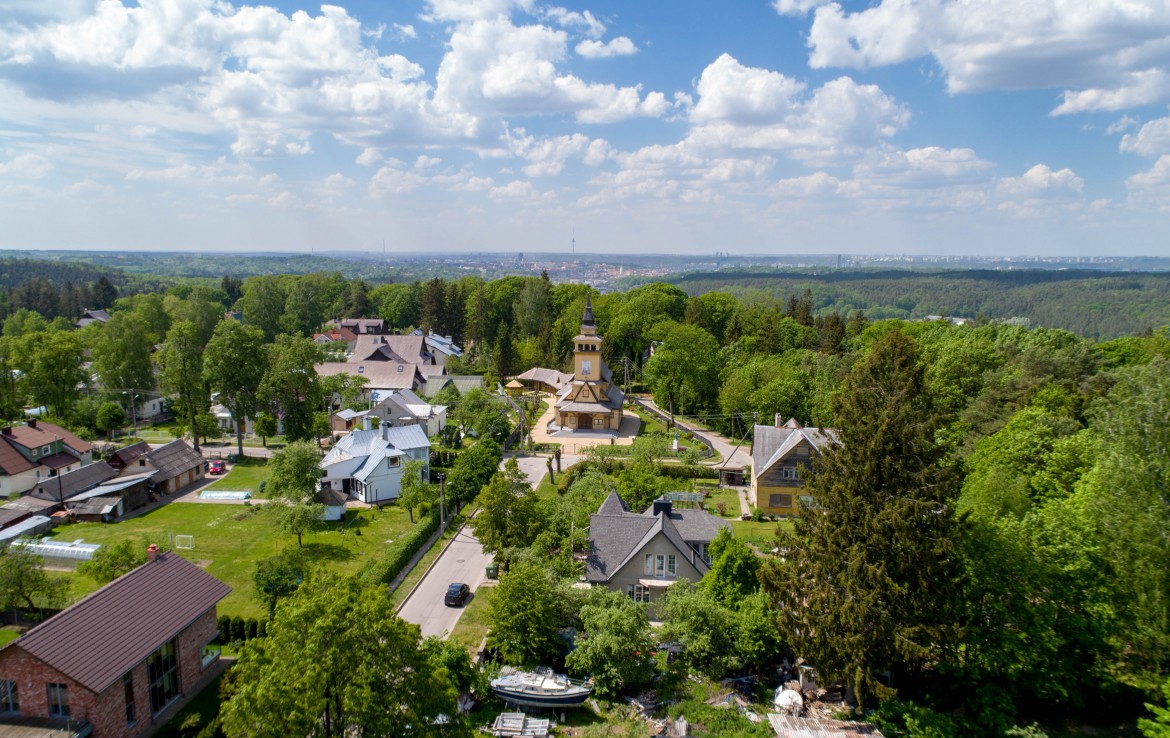 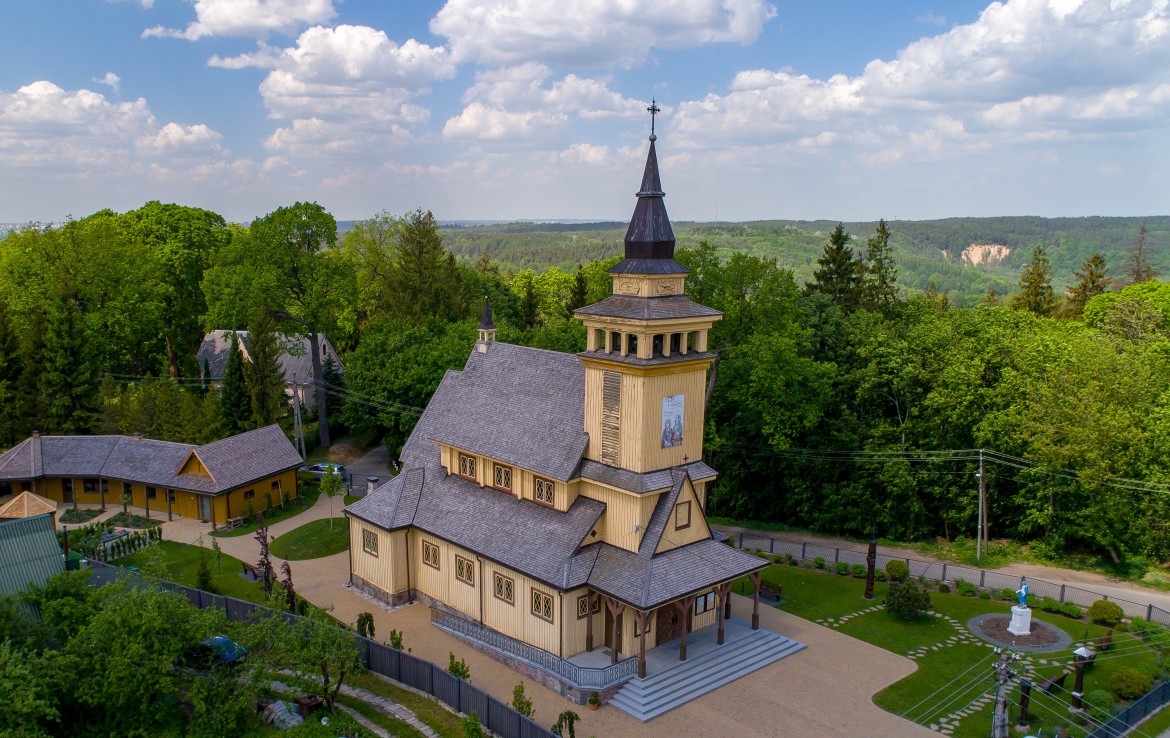 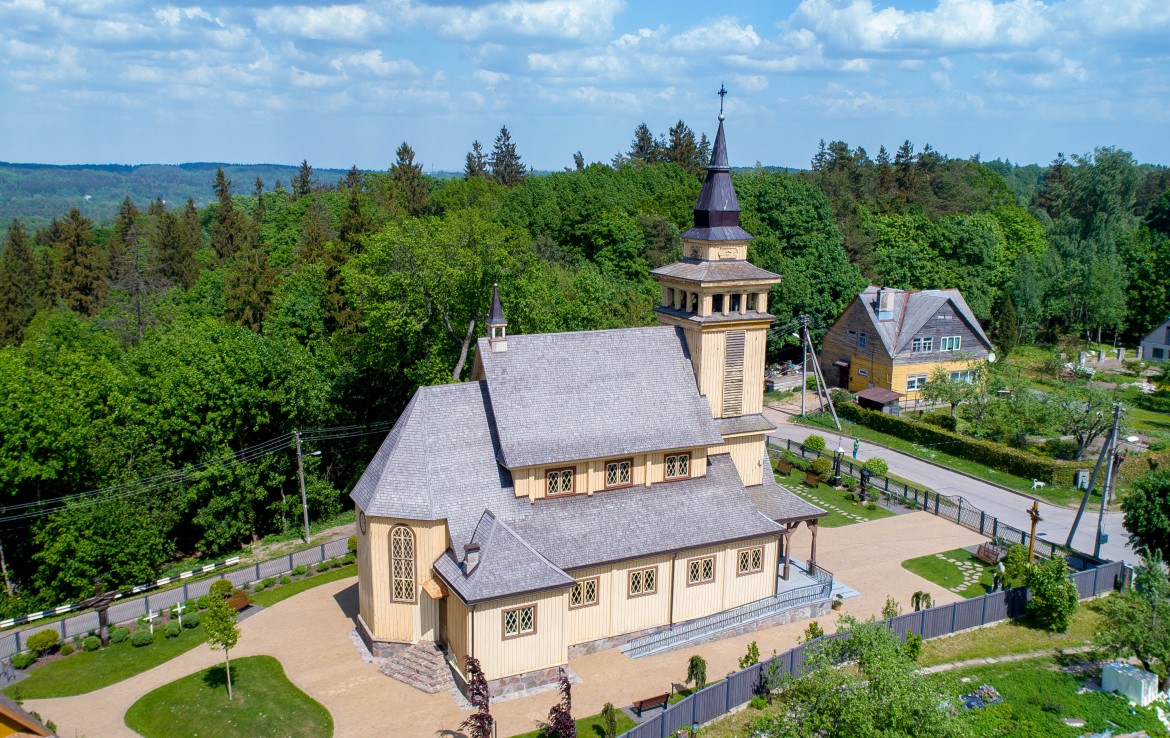 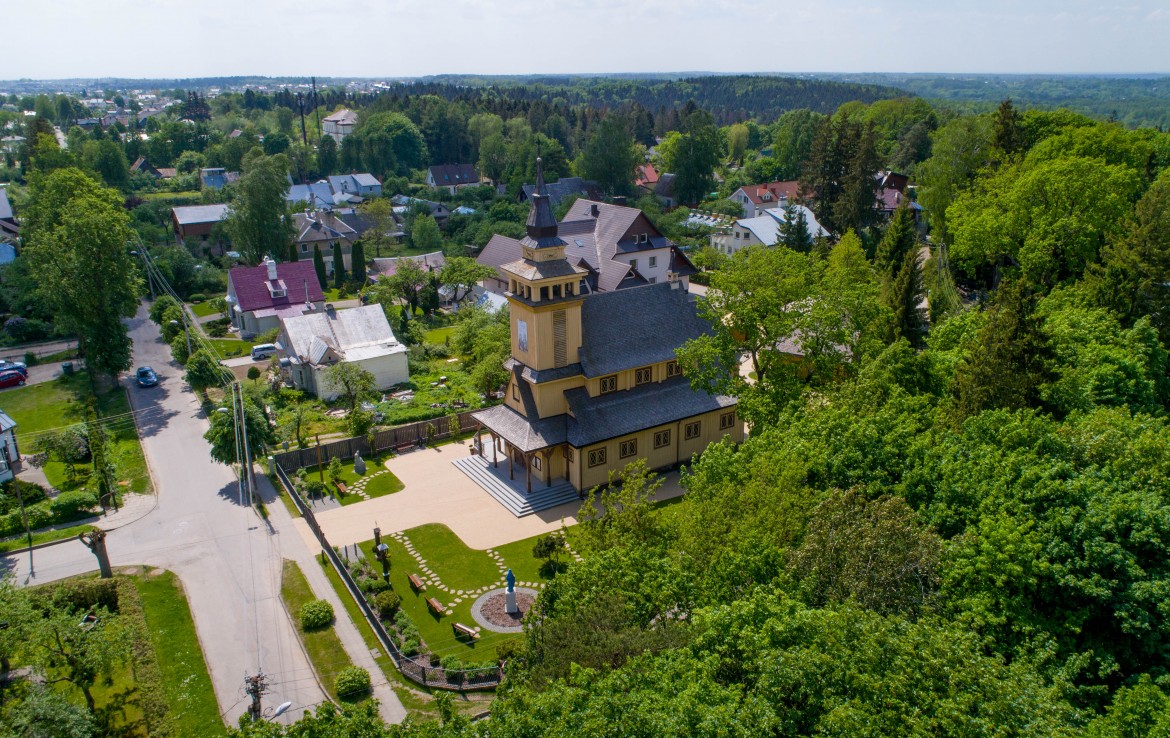