Wooden Chapel of the Cemetery of Palanga City Municipality

Palanga cemetery chapel was built around 1815 for the funds of parishioners and donors. The parish cemetery near the chapel was opened in 1824, when it was relocated from central Palanga to the north of the town. The reason for this was presumably the need to expand the cemetery, which was impossible in the growing town center. The cemetery had a territory dedicated to burial of people of other confessions, Lutheran and Orthodox.

The chapel built in 1815 in the area of the planned cemetery is historically valuable as an example of the traditions of wooden sacral folk architecture of the first half of the 19th century. The octagonal chapel is among the most striking fragments of the historical structure of Palanga cemetery. This is a typical cemetery chapel of folk architecture.

Its octagonal layout is somewhat exceptional. Until the 18th century, a rectangular layout dominated the architecture of Samogitian churches, and folk churches of polygonal layouts appeared as late as in the second half of the 18th century. The chapel is one-storey with a basement and an attic, of compact volume, with an eight-edged roof covered with wood chips, now replaced by steel sheets. The foundation is mixed, made of field stone and brickwork. The walls are boarded with vertical wooden planks with lattice. The floor has a wooden cover for accessing the basement. The chapel has two rectangular windows and an altar in front of the entrance.

Once this chapel looked slightly different: the visitation act of Palanga church described it as a wooden, octagonal building on a low stone foundation, with two windows partitioned into squares and a roof covered with thick boards. A single turret with a bell, or sygnaturka (Polish) inside it was erected above the roof. On the west side of the chapel, the floor had a wooden cover: when opened, it allowed access to a brick basement beneath the chapel. It is likely that people were buried there, but currently there are no signs of burial. The interior of the chapel was simple, elementary, characteristic to private chapels of cemeteries and mansions where St. Mass was not held on a regular basis, only with certain intentions. A single altar of two sections was located in the northern end of the chapel. The center of the altar included the depiction of St. Peter the Apostle, the second condignation had the picture of St. Mary Magdalene painted on canvas. The archive sources of the first half of the 20th century reveal that the chapel named after St. Mary Magdalene.

At the end of the war the chapel was robbed, its interior was destroyed, and the cemetery itself was ravaged: the altar, wooden indoor crosses, pews, benches were destroyed, the door was damaged, a window glass was broken, the sygnaturka was stolen. Most of the tombstones were damaged, the small metal fences were stolen, metal sculptures of Christ’s Passion were ripped off the crosses. Around 1946, minor repairs were completed: the broken door was fixed, the window with the broken glass was boarded, the door and the iron cemetery gate were repaired.

In the 19th century and the first half of the 20th century, the cemetery and the chapel there belonged to the Catholic parish of Palanga. In the second half of the 20th century, the cemetery was granted the status of a civilian cemetery, and the nationalized chapel became its accessory. The interior of the chapel was not restored in Soviet times. At that time the cemetery chapel was owned by Palanga City Municipality. “Traditionally, the dead were laid out in the larger chapels of the cemetery, mourning Mass was held for them, and noblemen were buried in the basements of these chapels. No burial data was found in the chapel basement. Currently the chapel is no longer used for its intended purpose, its interior is empty and abandoned; the floor is broken in some locations.

The area of the cemetery extends beyond its historical limits. The cemetery contains several graves included in the Register of Cultural Values, including the grave of the composer Balys Dvarionas (1904-1972), and the first woman photographer in Lithuanian history Paulina Mongirdaitė (1865-1916), who was a photographer of counts Tiškevičiai of Kretinga and Palanga and the pioneer of photojournalism is buried next to the chapel. 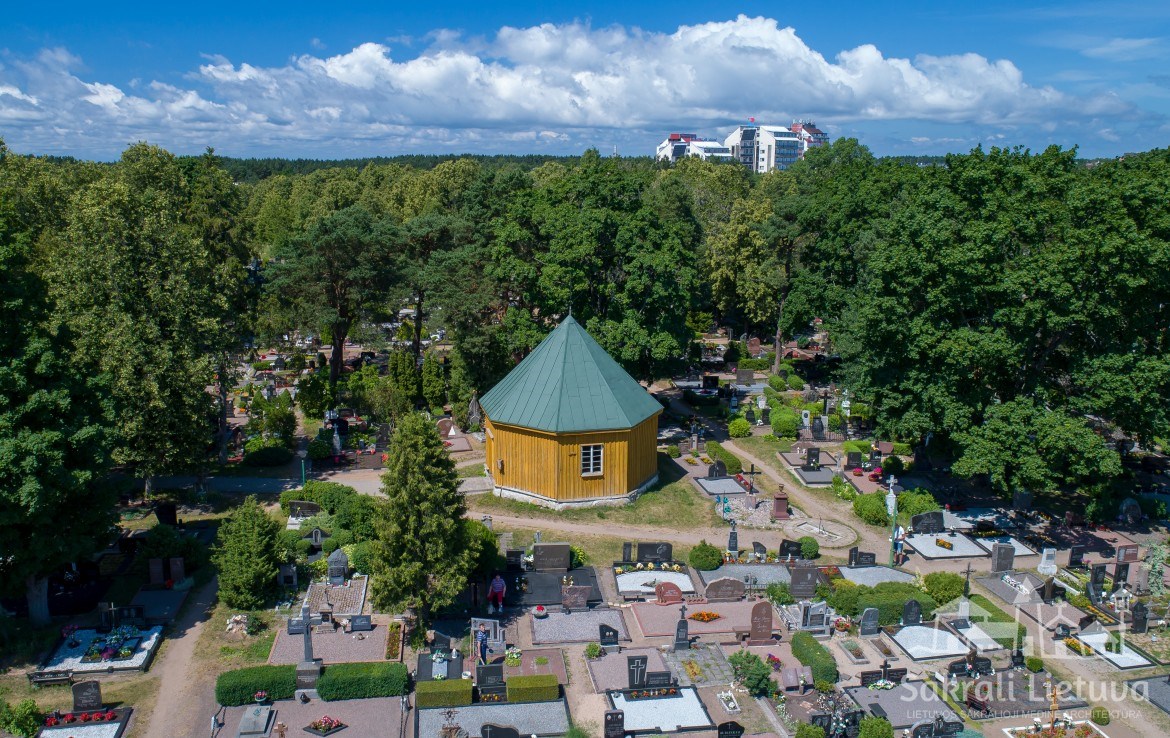 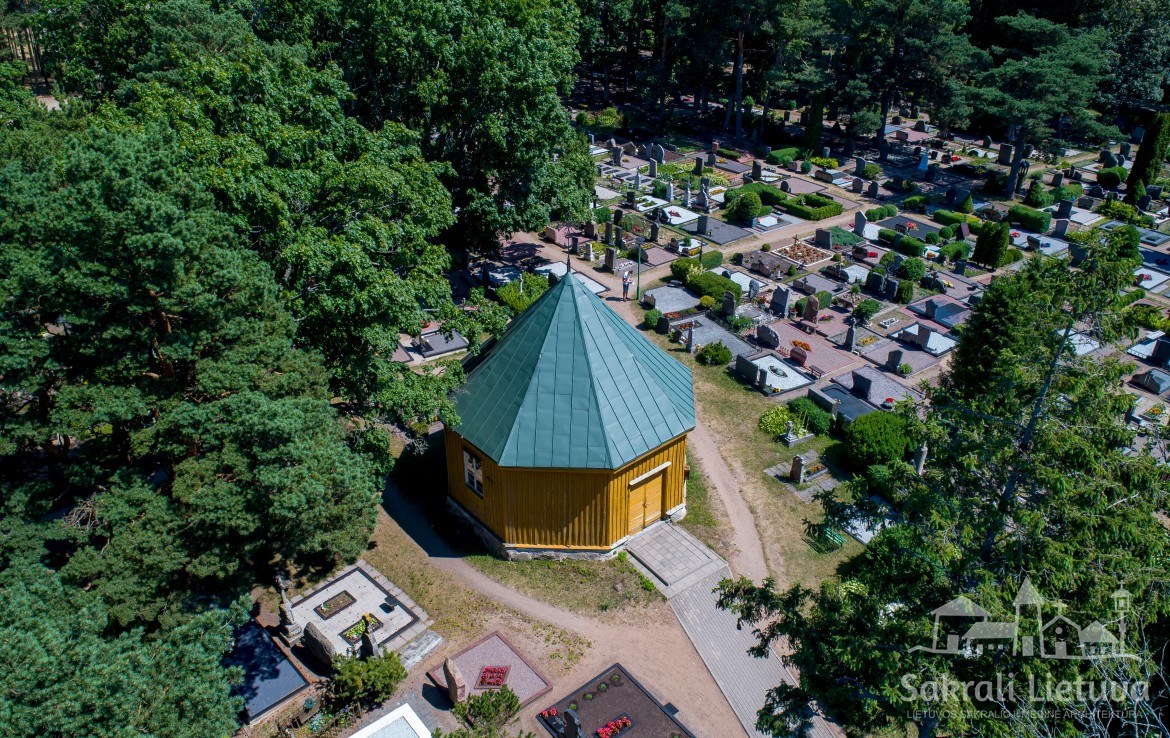 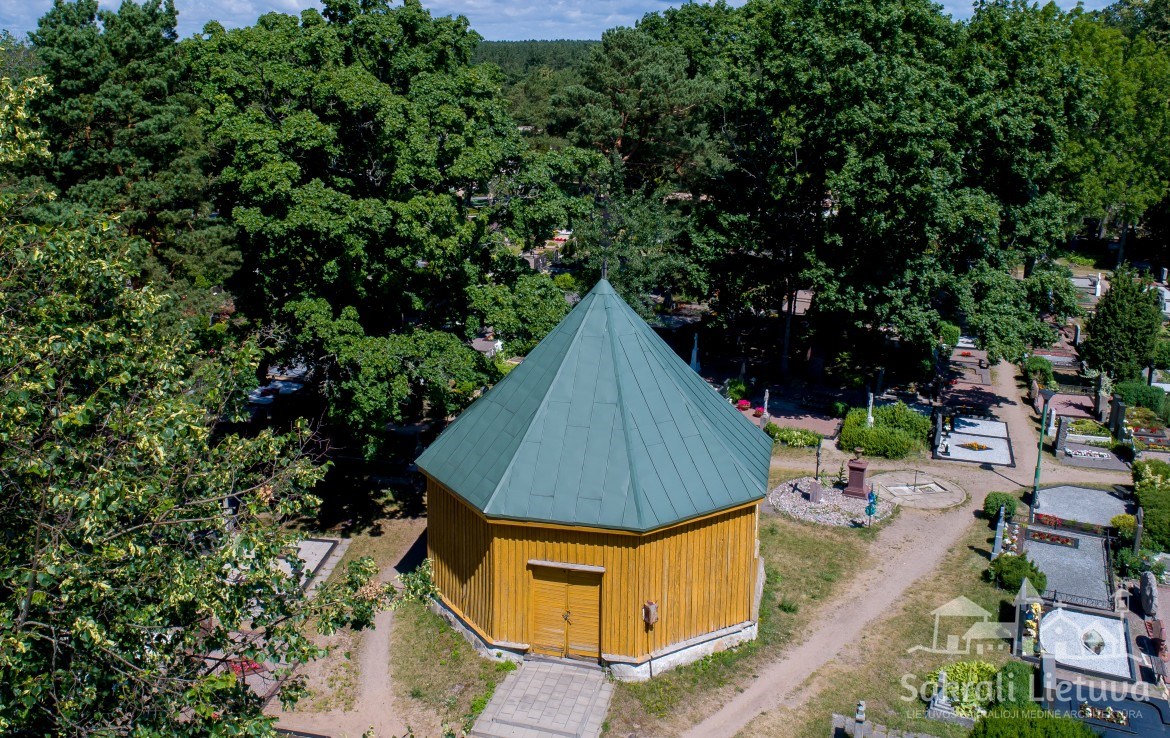 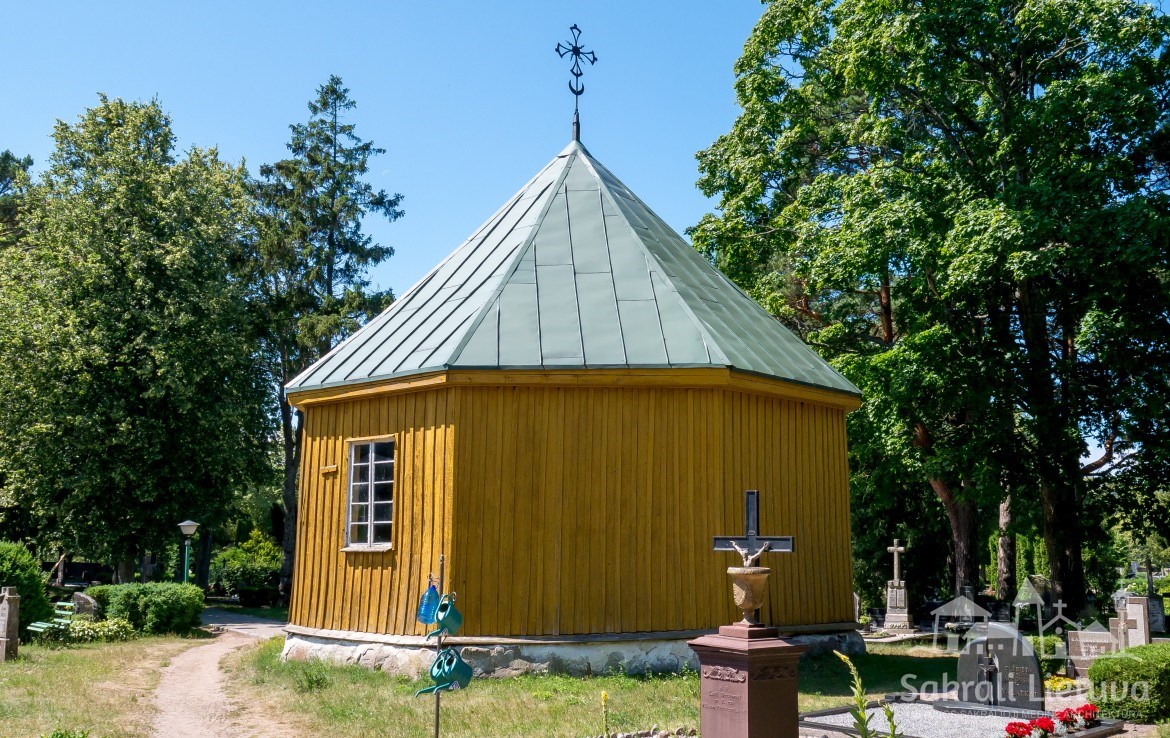 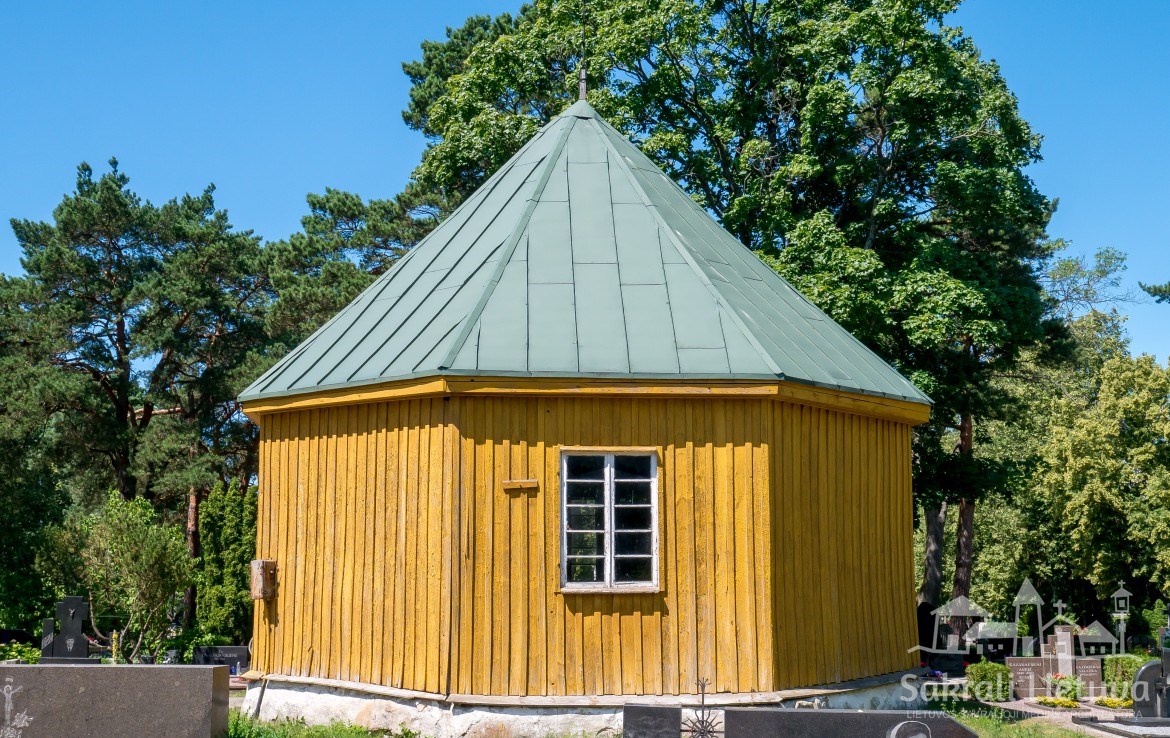 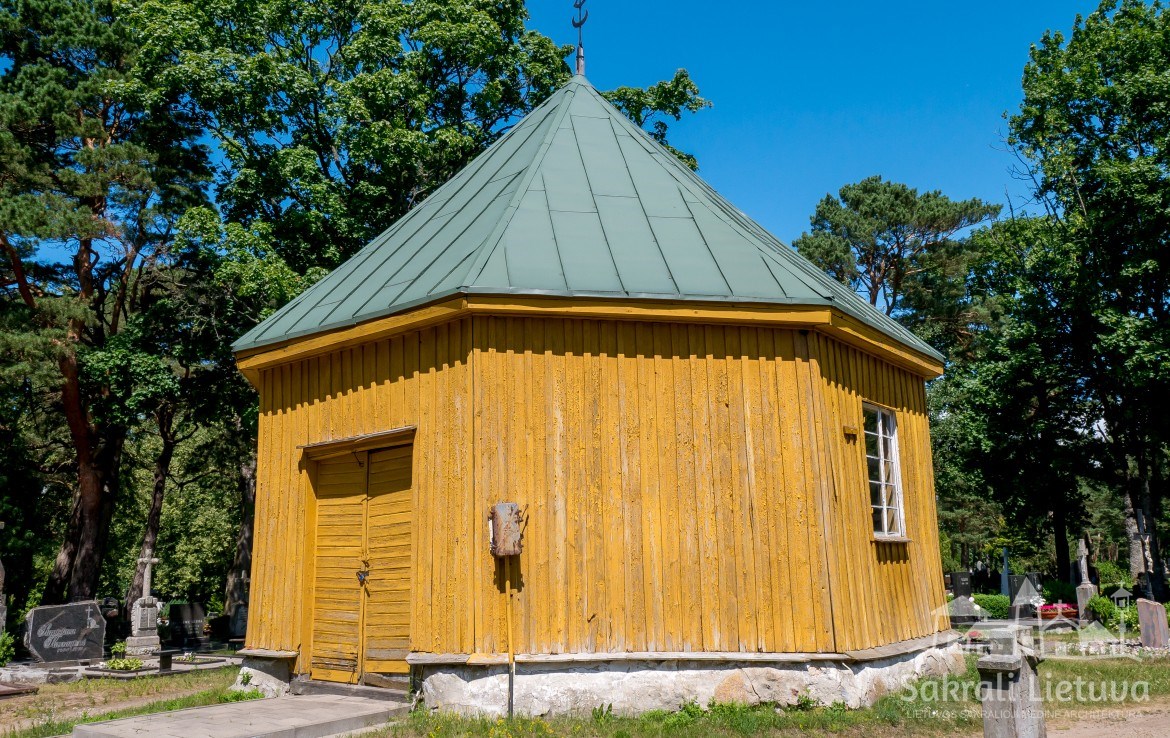 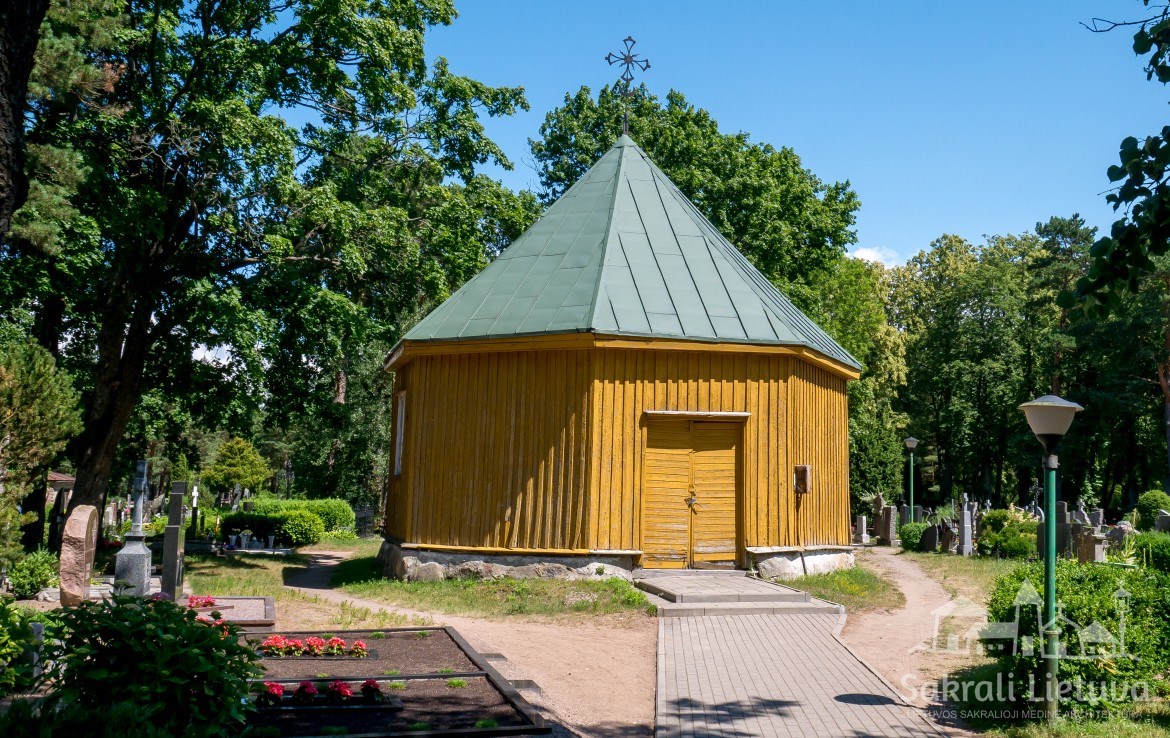 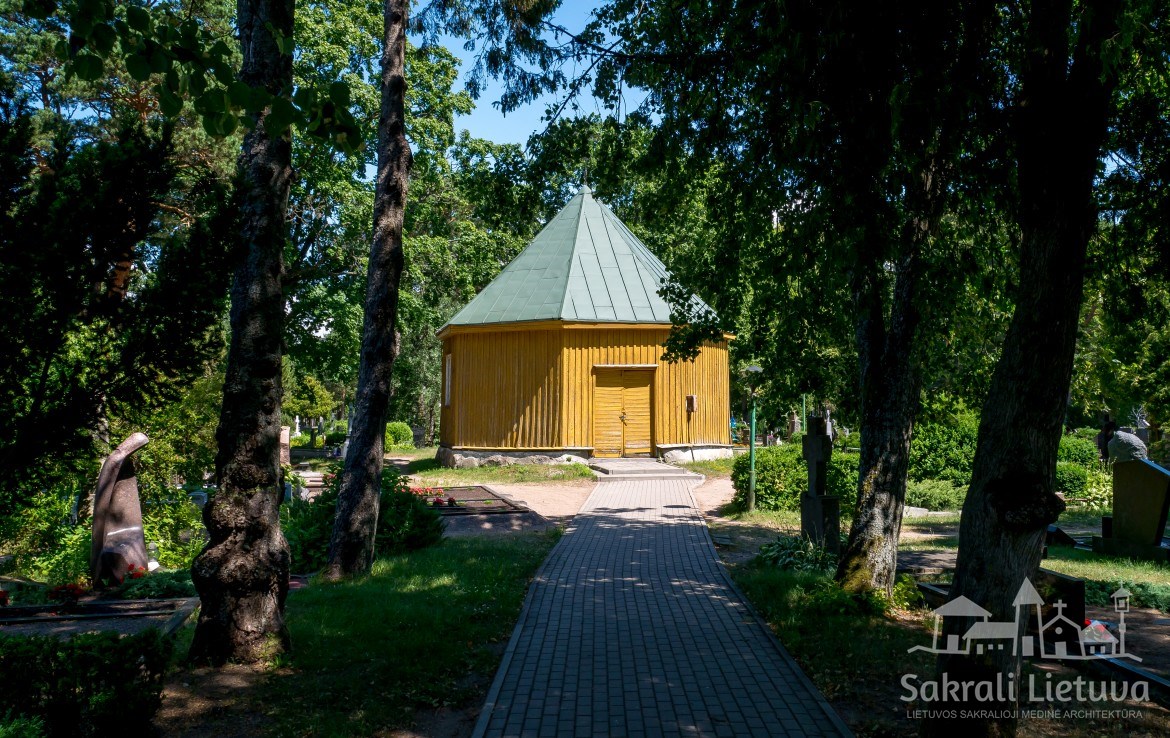 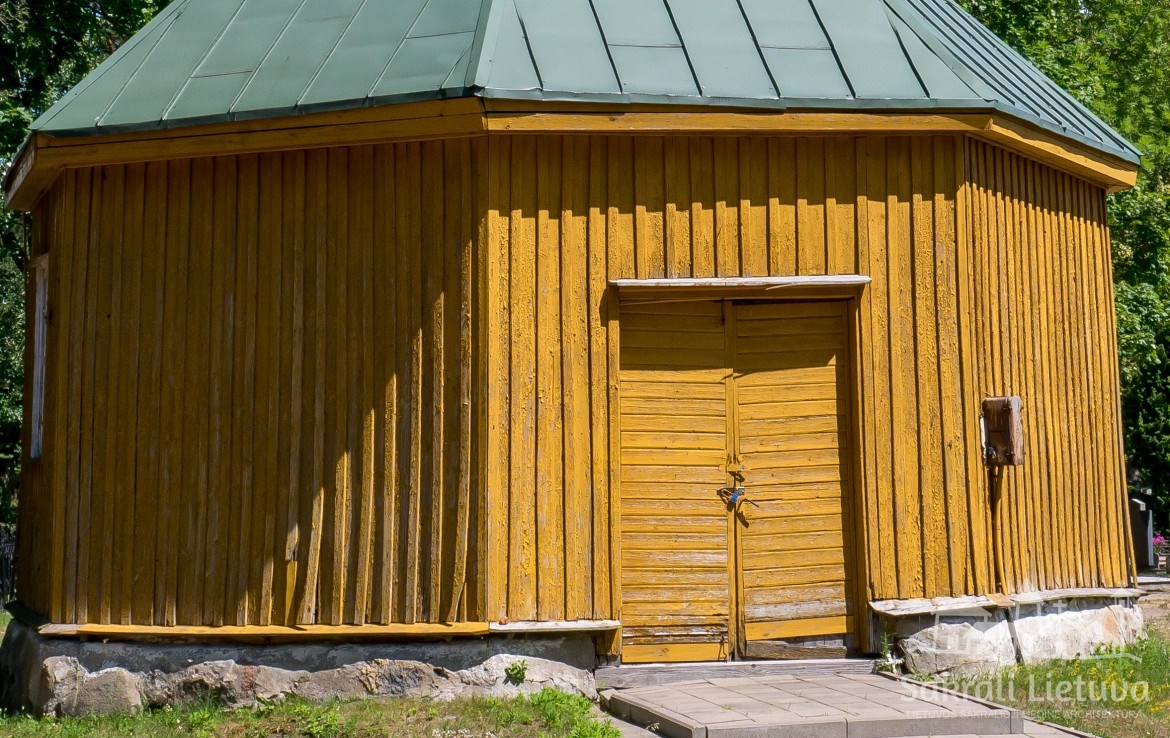