The Mosque of the Old Cemetery of Forty Tatars Village

The first Tartars settled in the land of the Grand Duchy of Lithuania in the 13th-14th centuries, when the dukes of that time maintained close relations with the Golden Horde. The Tatars were known as great warriors, so the Grand Dukes of GDL, Gediminas, Algirdas and Kęstutis formed alliances with the Tatars when they needed to repel the attacks of hostile countries or organize military campaigns themselves. Some of the Tatar tribes who had become loyal allies stayed in the state of Lithuania and settled in lands donated by Grand Duke Vytautas.

Keturiasdešimt Totorių (Forty Tatars) is among the oldest Tartar settlements of the Grand Duchy of Lithuania. In 1397, the Grand Duke of Lithuania Vytautas brought the Tartars as prisoners of war from a successful war in Crimea. Some of them were settled by the Vokė River.

An interesting legend explains the name of the village. Vytautas the Great granted certain privileges to the captive Tatars that were settled in the Duchy of Trakai so that they could maintain their religion and customs. They were also allowed to practice custom polygamy. One Tartar that was settled there had four wives. They each gave birth to his 10 sons, 40 children in total. That was the origin of the village name. Around 1630, the village had 42 Tartar houses.

It is believed that the first mosque was built in this place in the time of Vytautas the Great. Written sources of 1558 mentioned a mosque that burned down during Napoleon’s march to Russia.

The existing mosque was built in 1815 and renovated in 1993. There are several Tartar cemeteries in the vicinity of the mosque and the surrounding areas. It is believed that the old cemetery dates back to the village establishment and may have graves marked only with stones that date back to the 14th-17th centuries. The oldest graves of other cemeteries have inscriptions of the second half of the 17th century. In commemoration of the 600th anniversary of the Tartar settlement in Lithuania, a memorial stone was installed near the mosque.

The walls of the mosque are made of wooden logs reinforced with vertical wooden brackets and boarded vertically with wooden planks with slats. The building of a rectangular layout and has a four-sided pyramidal roof covered with sheet steel. A small turret is located in the center of the roof. It is octagonal with an onion-shaped helm, glazed facades and a peak topped with a crescent. The front facade has one closed porch, as two separate porches that existed before restoration were demolished and rebuilt as one. Rectangular windows are located only in the porch and the rear facade. The back wall has no mihrab, usually facing Mecca. It is the only Tartar mosque in the GDL that has no mihrab. 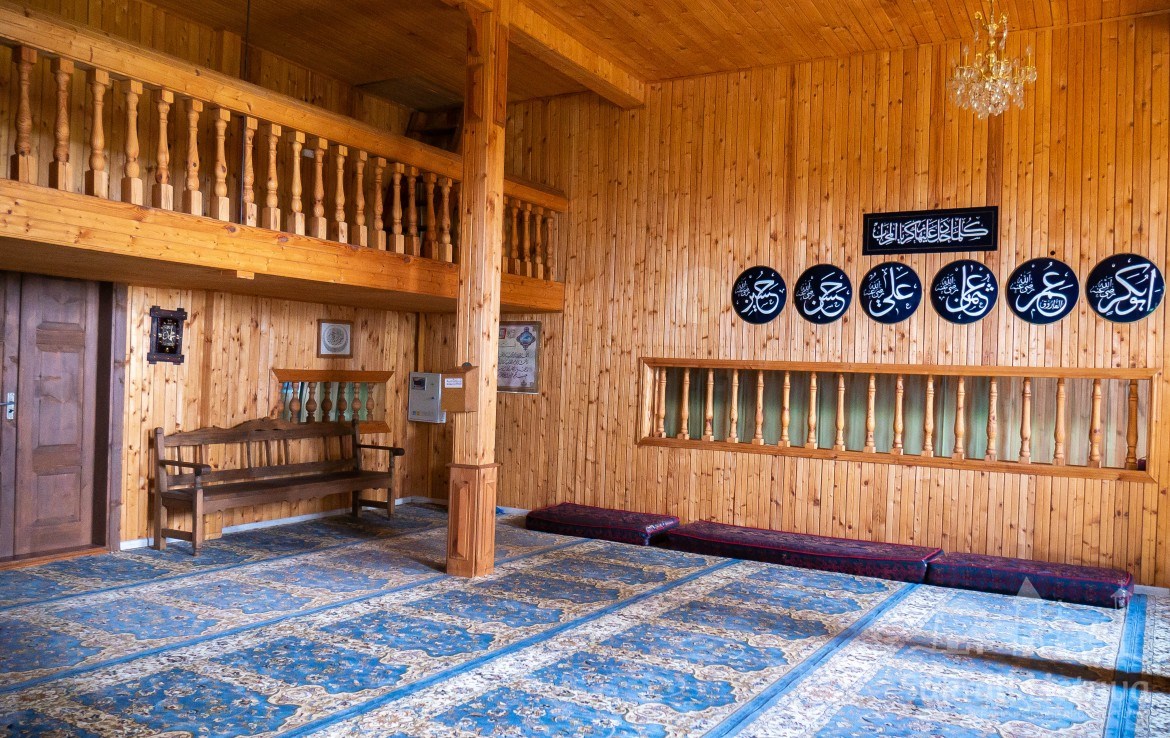 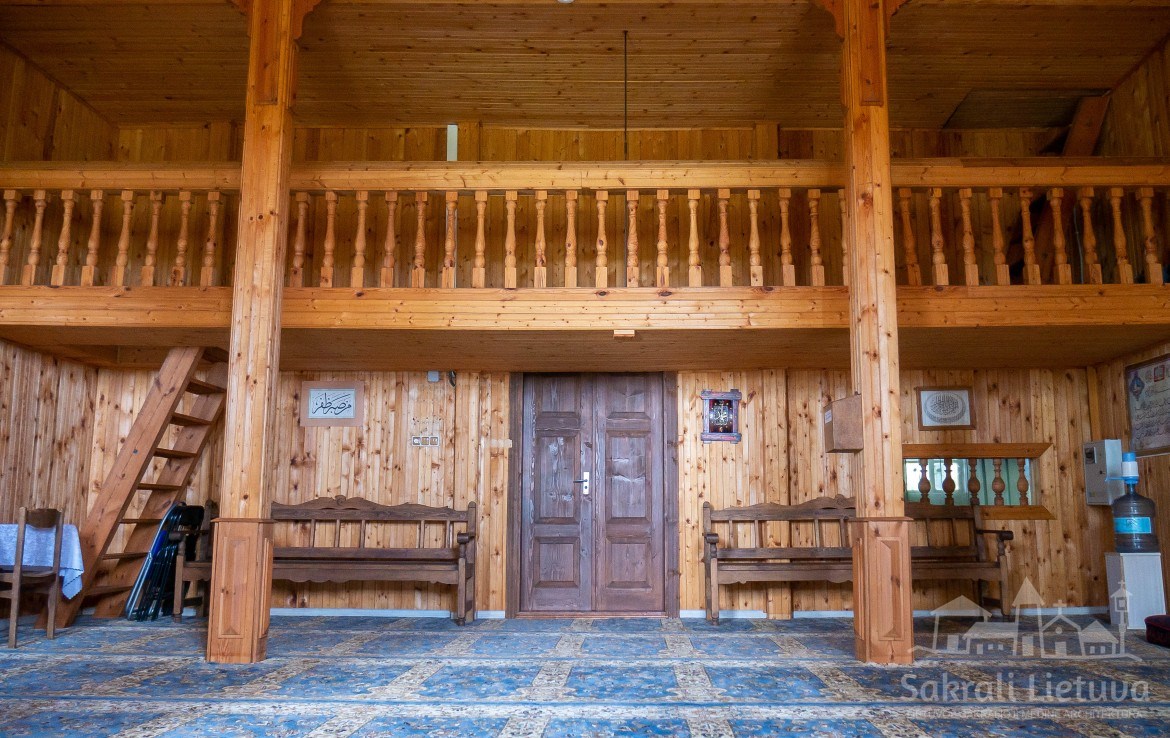 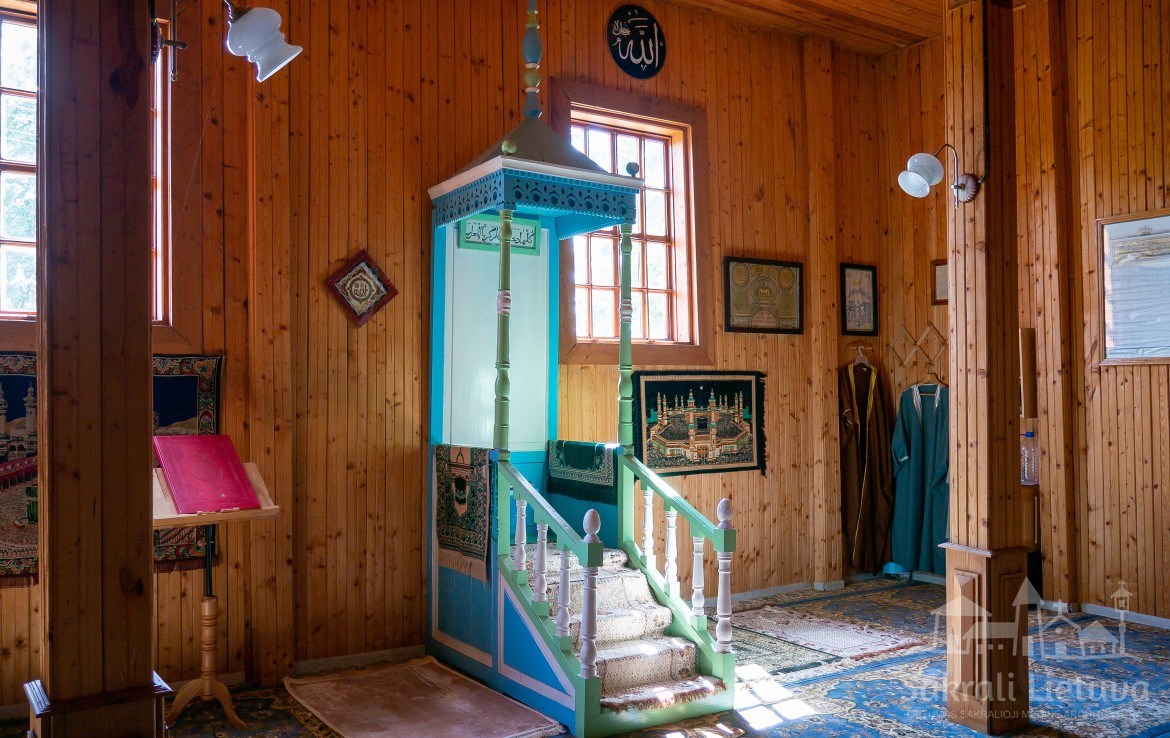 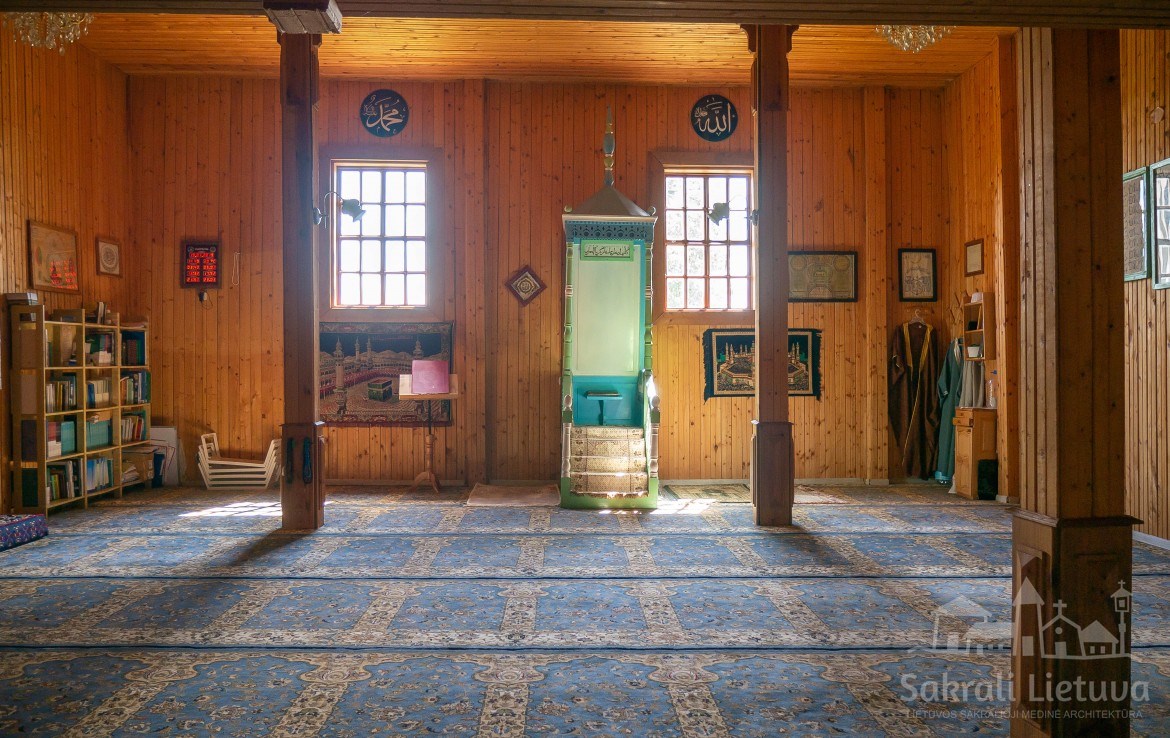 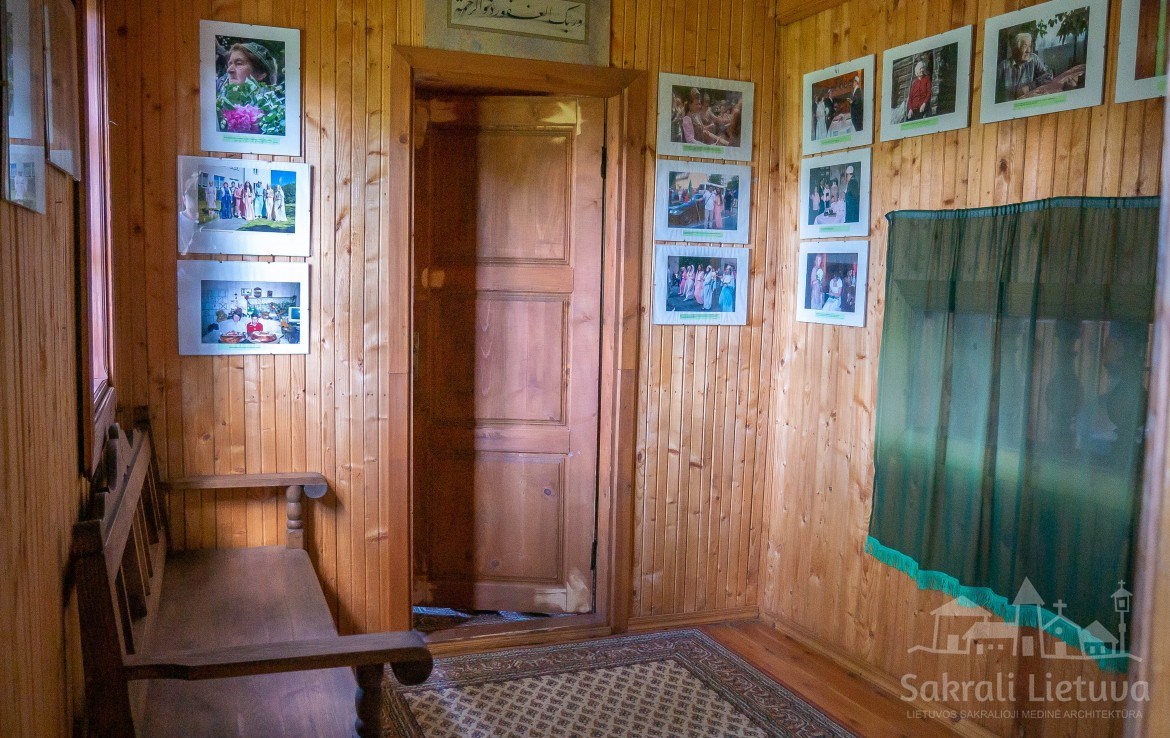 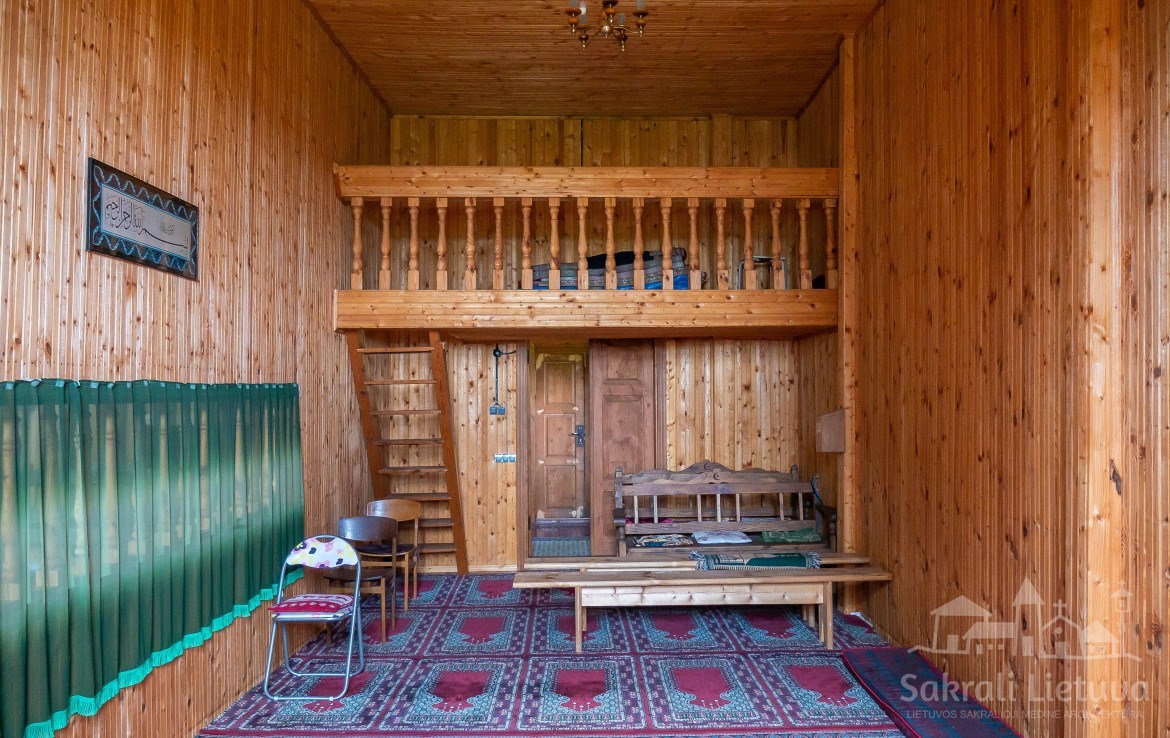 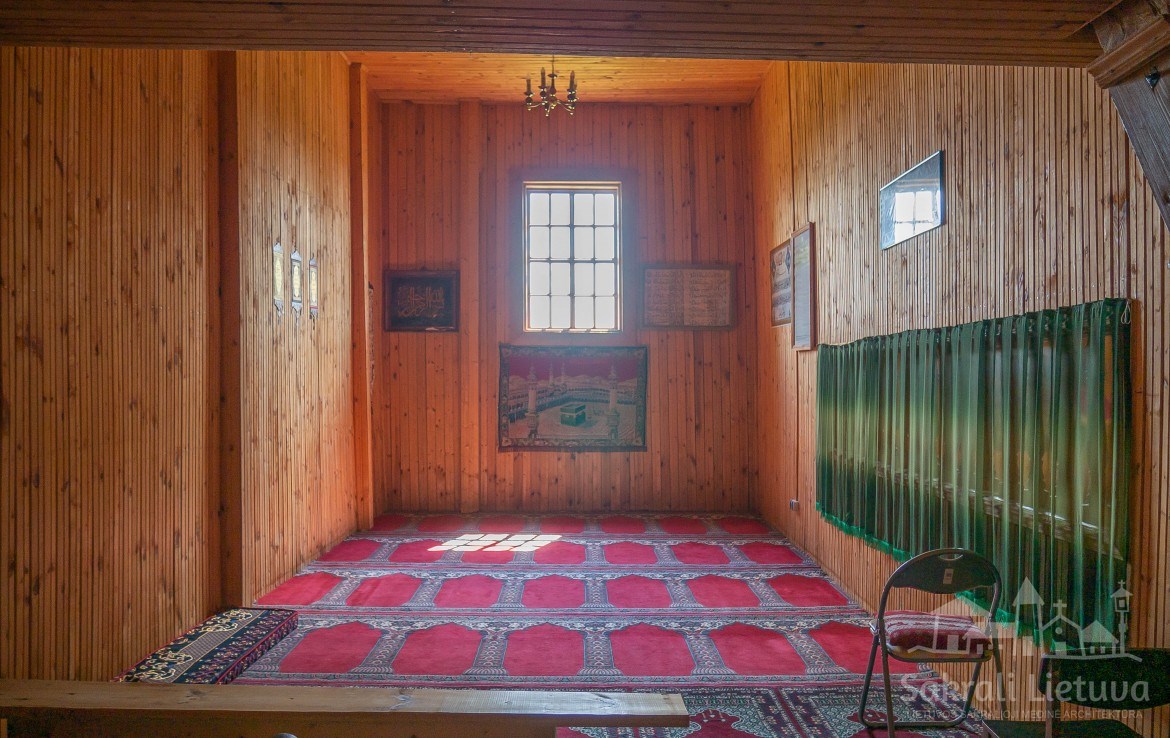 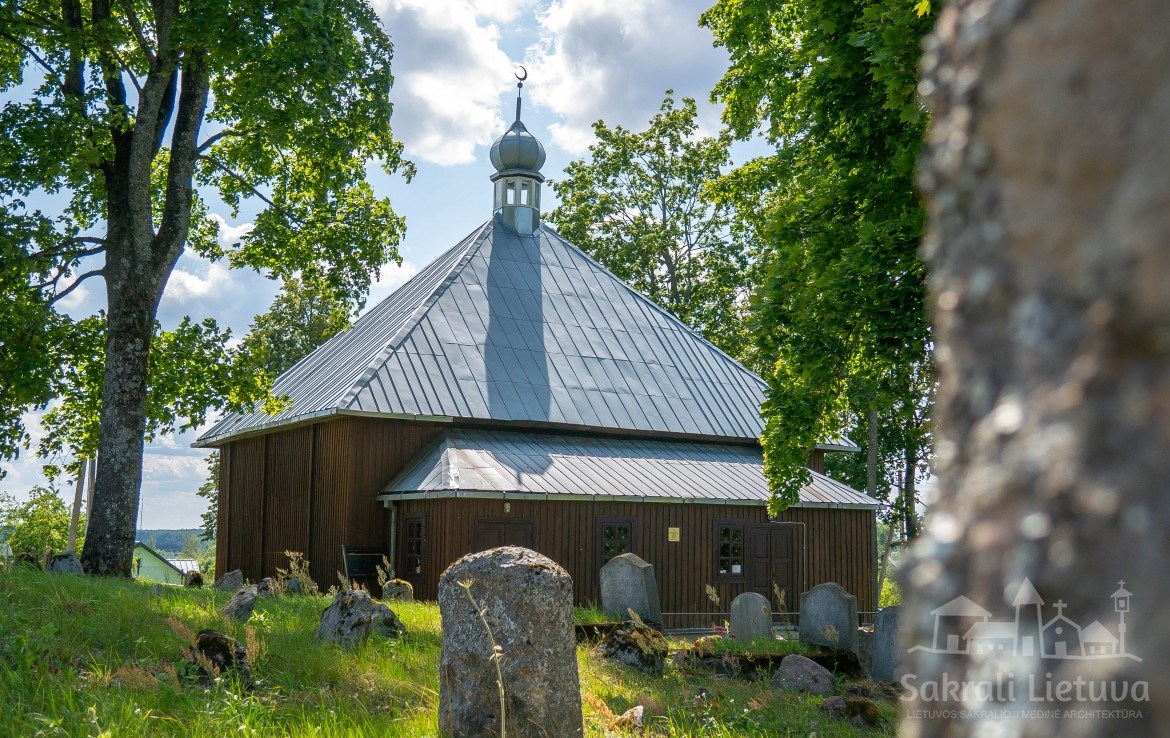 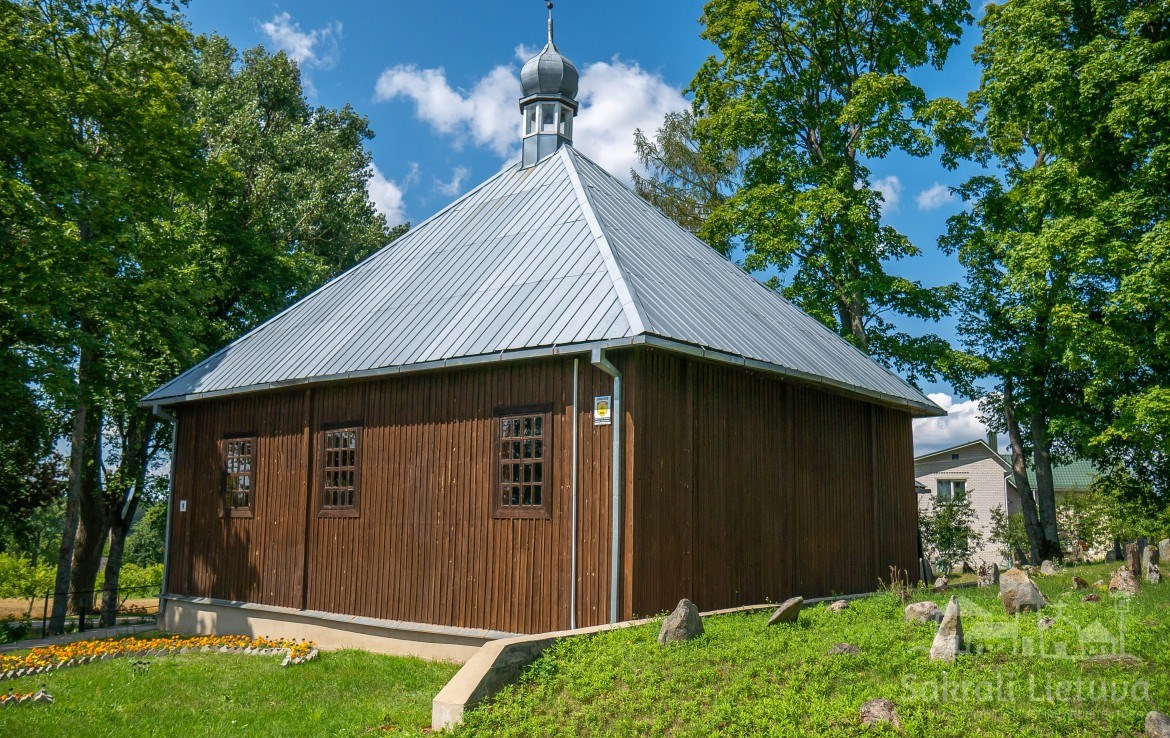 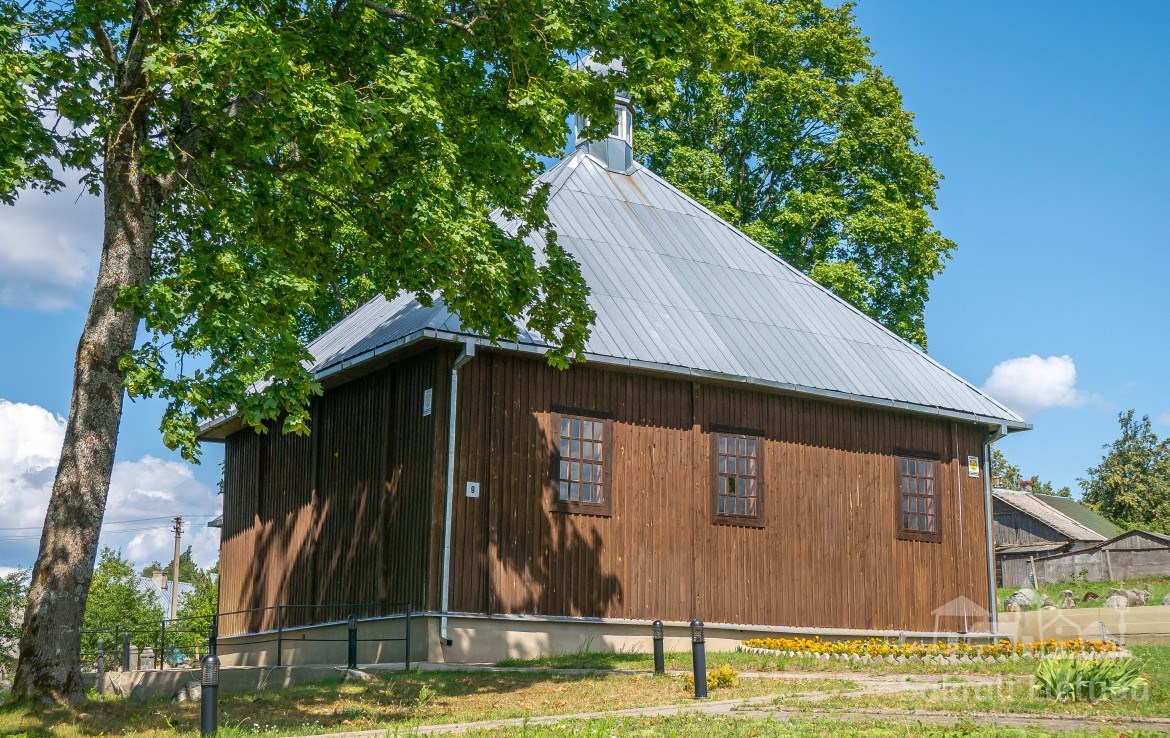 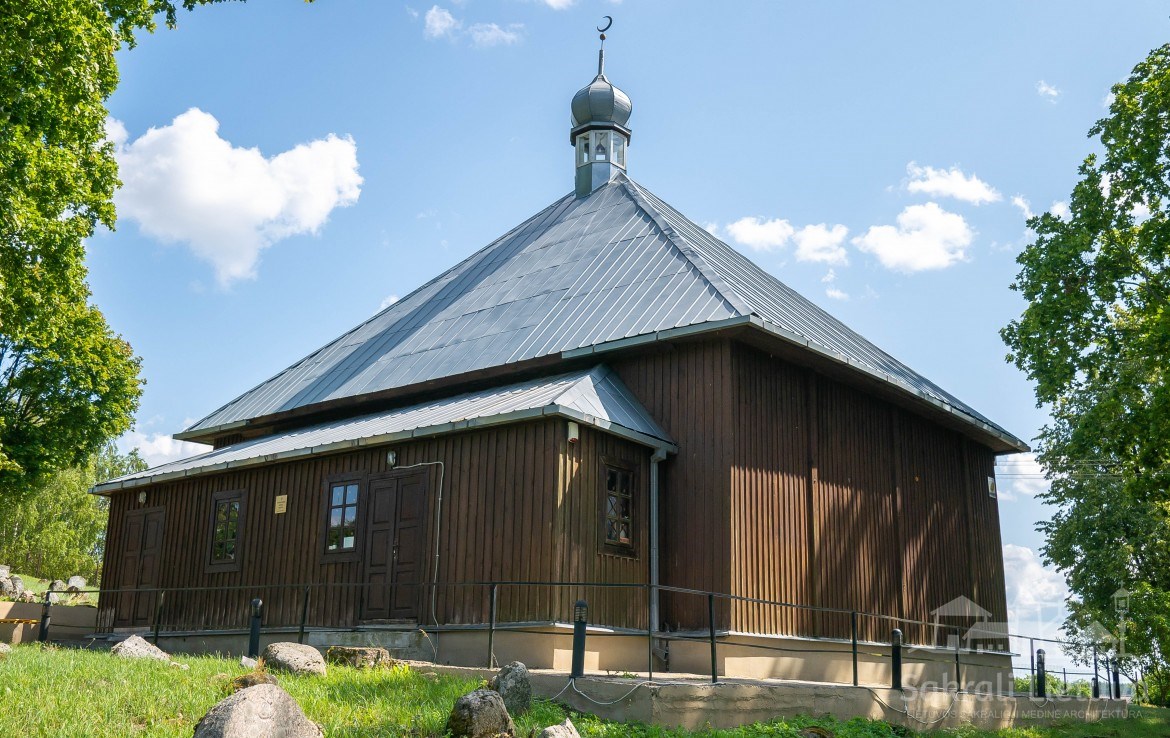 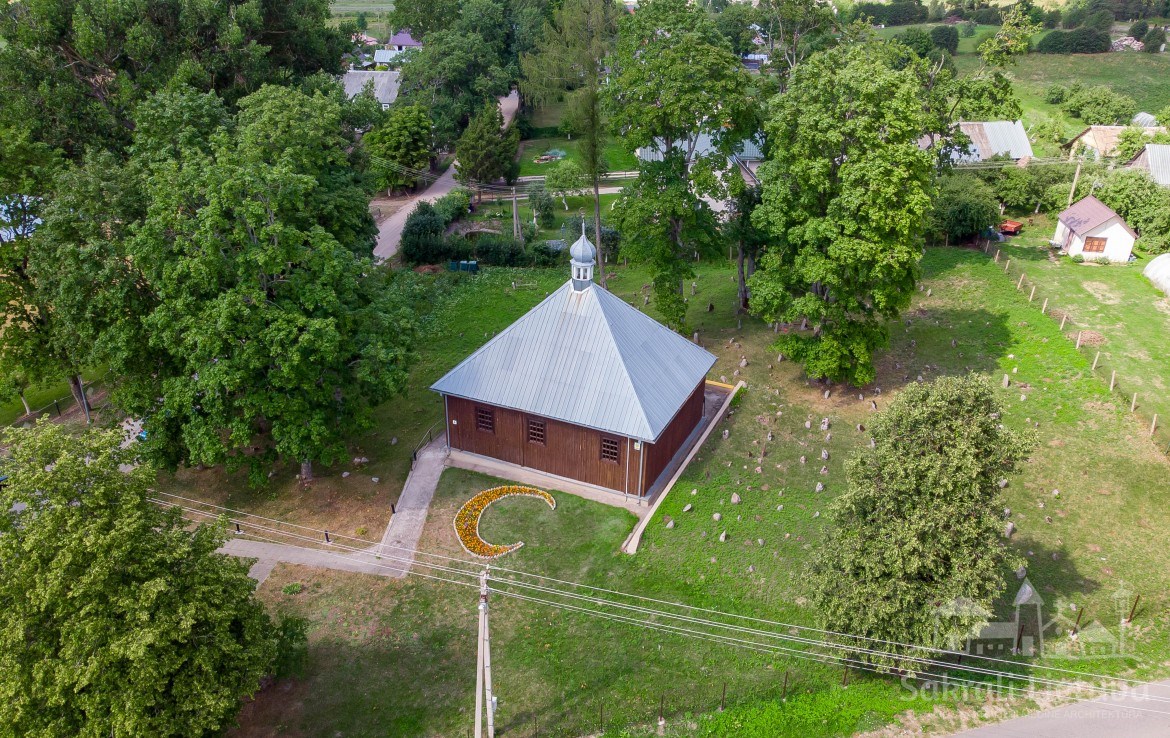 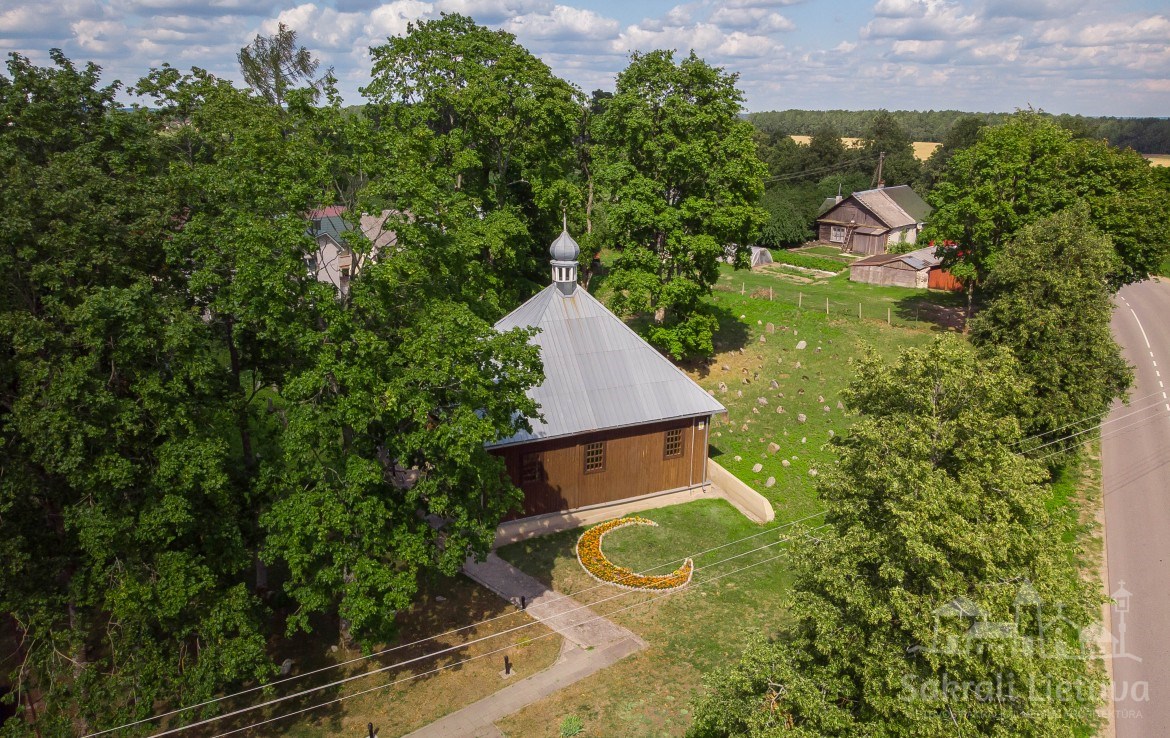 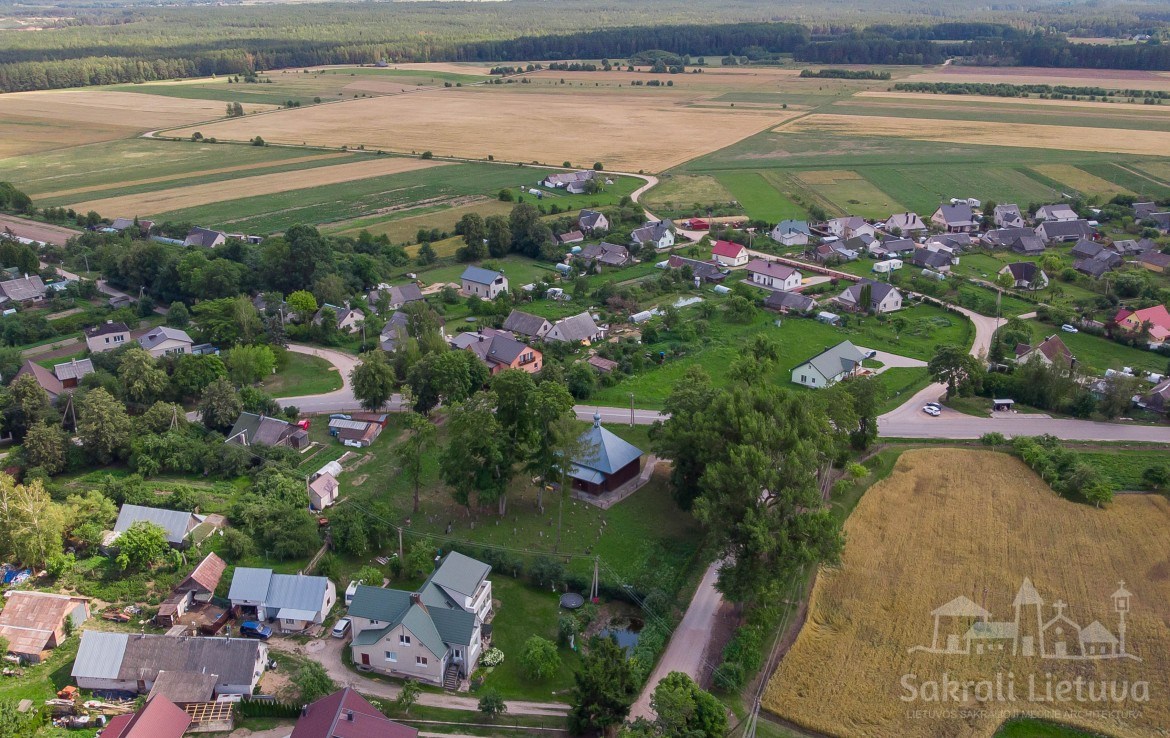 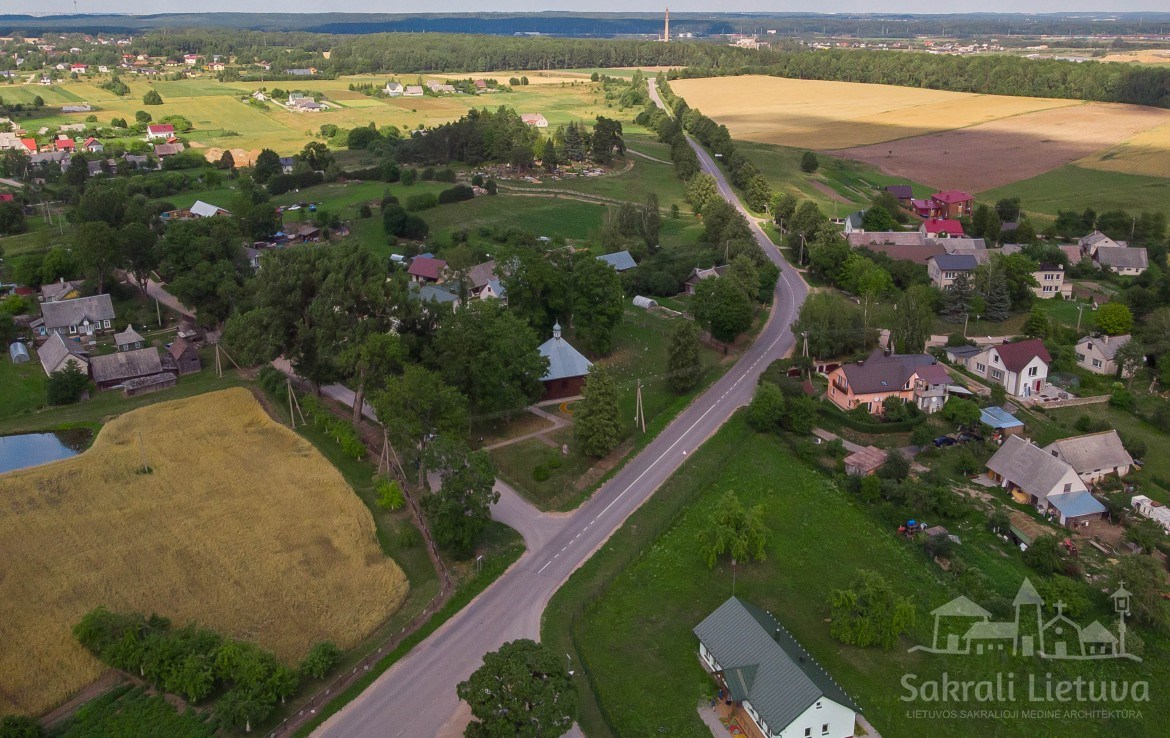