St. Anthony Church in Judrėnai is significant both architecturally and historically. Steponas Darius, originally from this area, the then village of Rubiškės (now the village is named after the deceased pilot Darius), was baptized there.

The history of Judrėnai Church dates back to 1732, when a feast of St. Anthony of Padua was announced there. In 1752, a valakas of land was donated to the chapel, a priest was assigned to it, and it became a filial chapel. Half a century later, the present wooden church was built there. In 1906, a parish was established there. Nestoras Bucevičius, the owner of Judrėnai Manor, donated 10,600 rubles for the priest’s salary.

The church of St. Anthony of Padua in Judrėnai is already counting the third century. The folk architecture church of a rectangular layout has two towers and a triangular apse. Its interior has three naves separated by thin pillars.

Built in 1780, the building was of a rectangular layout with a turret in the middle, but in 1876 the church was rebuilt. Its volume was extended by building a new ante-nave and a new main facade and two towers with windows on its sides. The newly built front part is level with lateral naves, consists of two stages and has square turrets with windows. The towers rise from the gable roof and end with small pyramidal roofs with bulbous cross pediments and ornamented crosses. Two more crosses on similar but lower pediments decorate the ends of the roof. Built on a stonework foundation, the church of a rectangular layout has a three-wall apse and is vertically boarded, with the board joints covered with planks. Two more crosses on similar but lower pediments decorate the ends of the roof. The main facade at the first section roof is decorated with rosettes: the larger one in the center and the two smaller ones on the sides. The second section at the pediment includes a window with a triangular arch and a profiled dripstone. Other spaces of the church have the same windows. The entrance of the ante-nave is adorned with a semi-circular, arched skylight, while the apse above the windows includes round skylights. A crucifix sculpture in the profiled frame is mounted on the back of the apse wall.

The church interior is decorated with five Baroque style altars. The pulpit stands out because of its decor: it has a wavy cornice richly adorned with floral ornamentation and the rounded, baroque-shaped underside.

The churchyard fence is made of stone masonry, and includes an arched gate. It has a cross, and statues of saints. 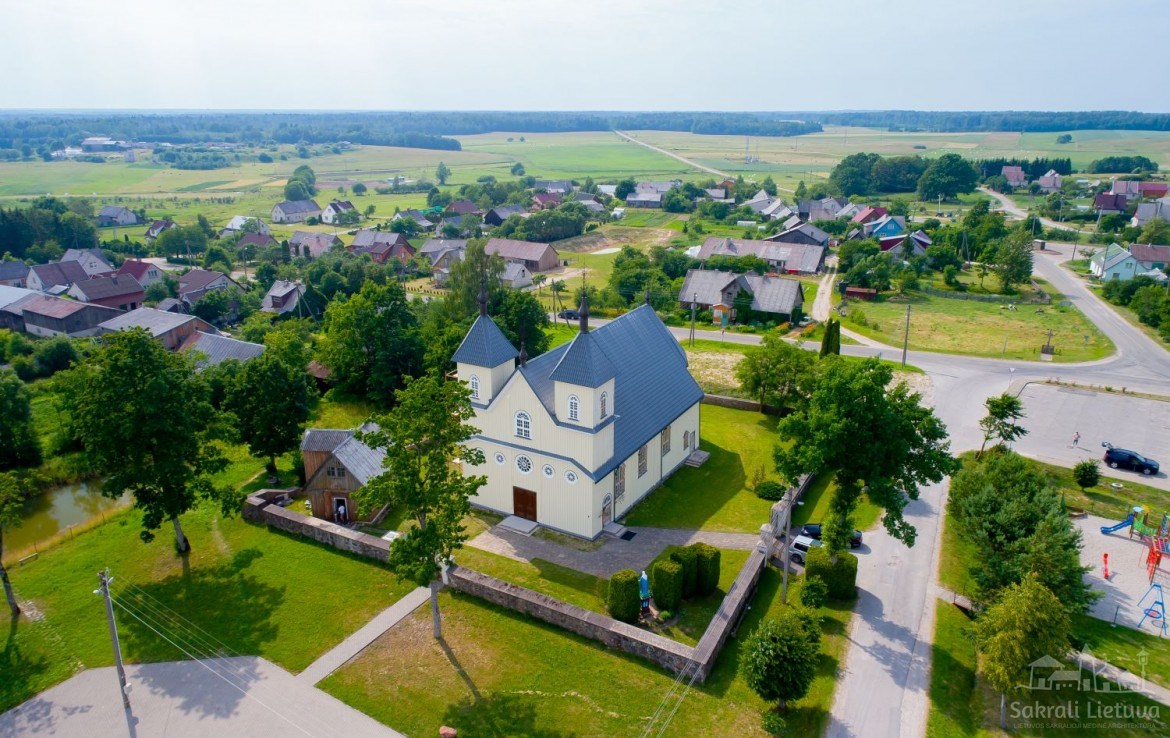 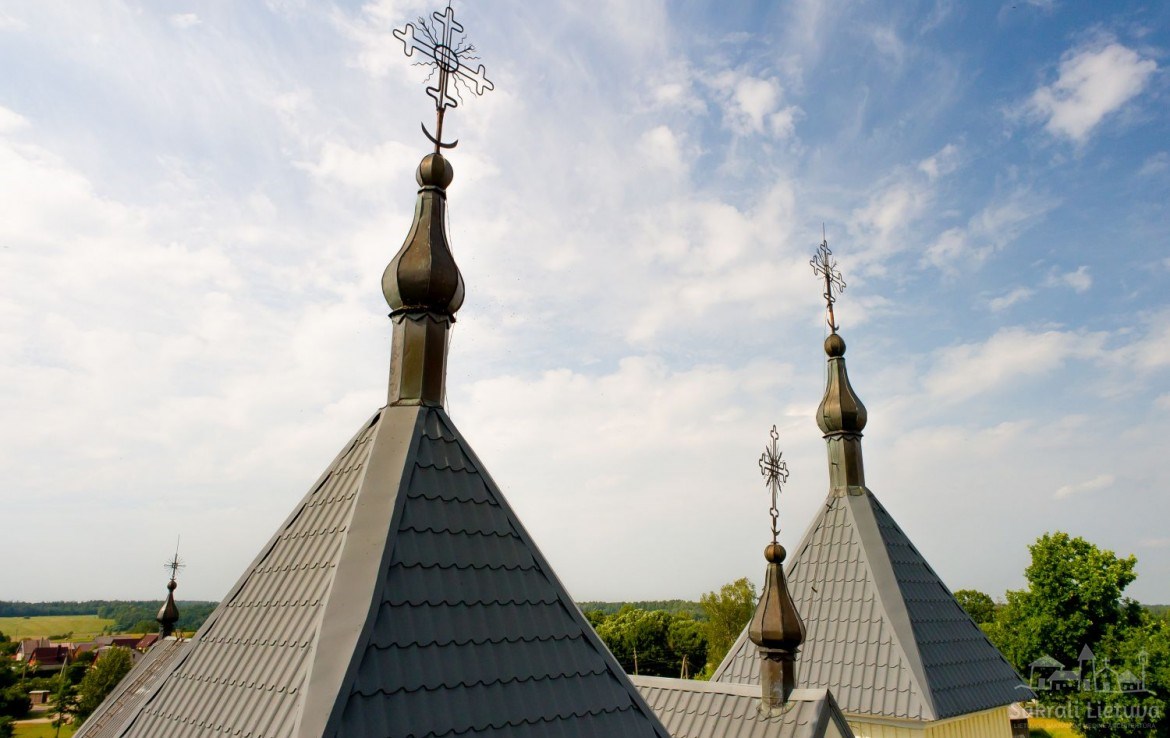 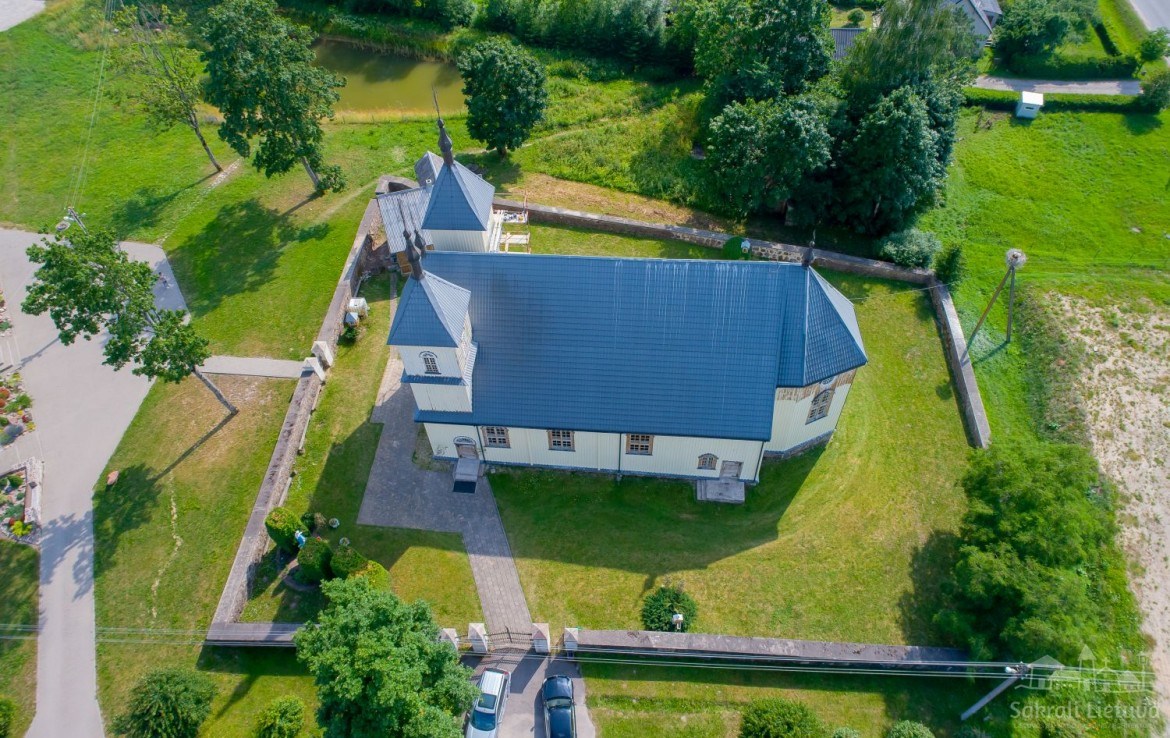 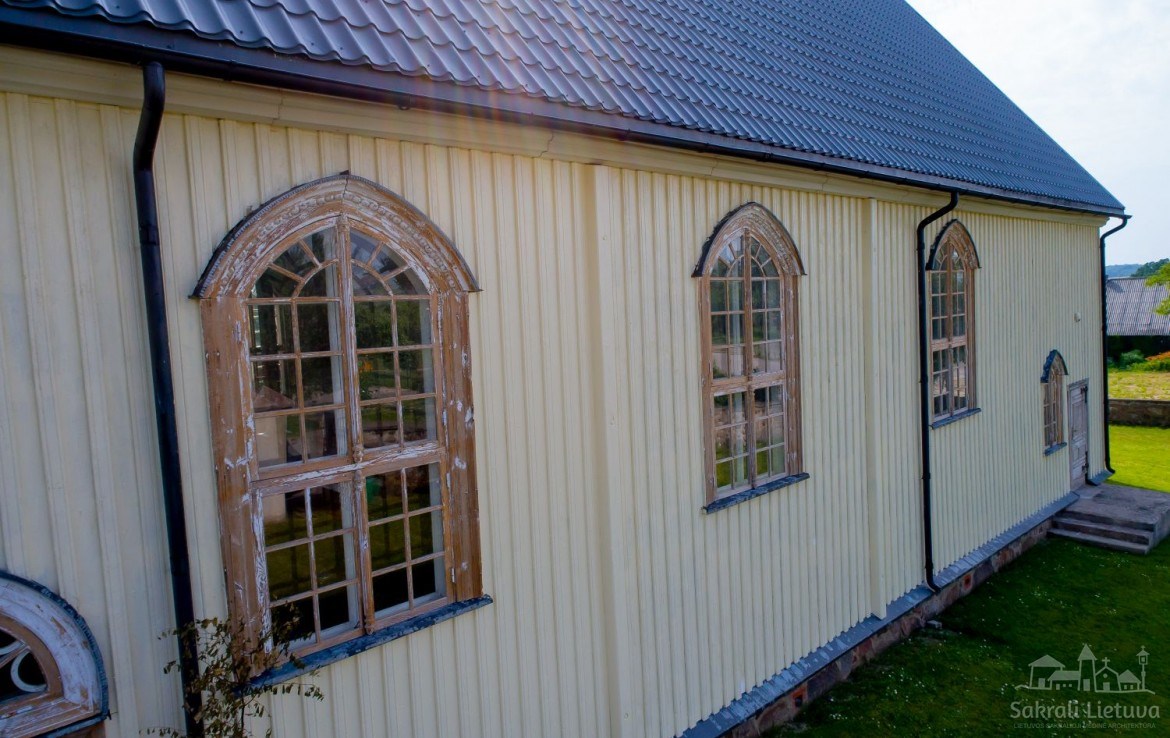 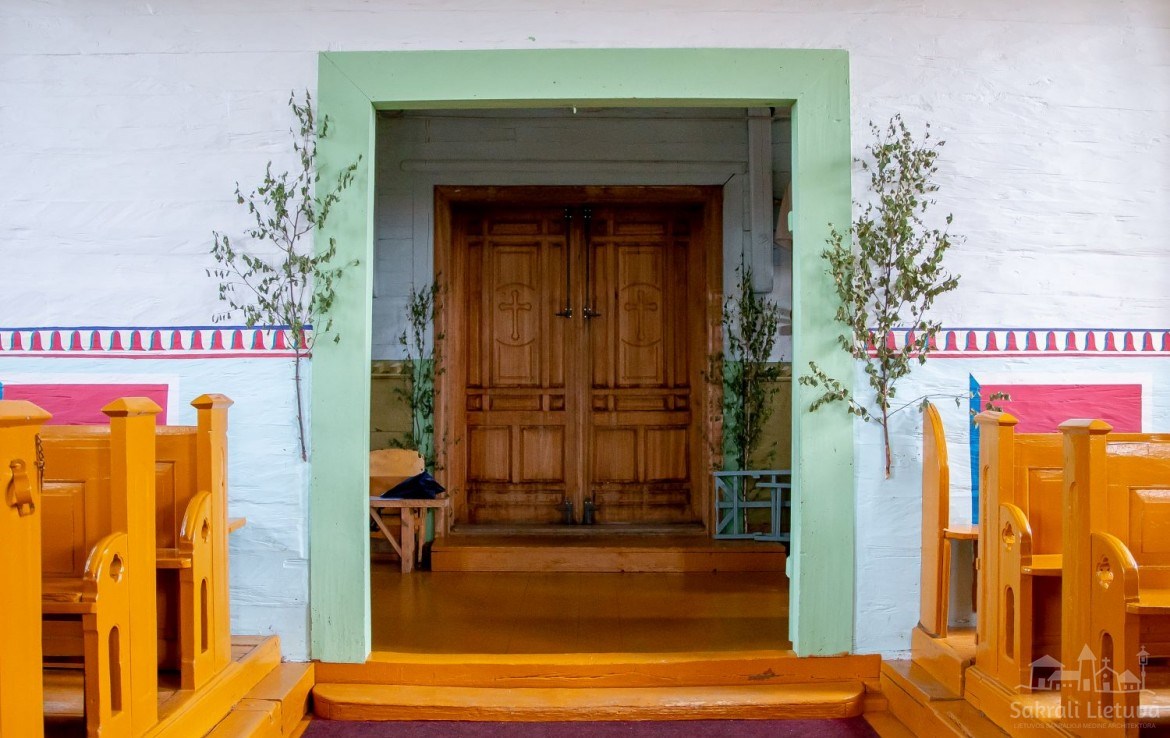 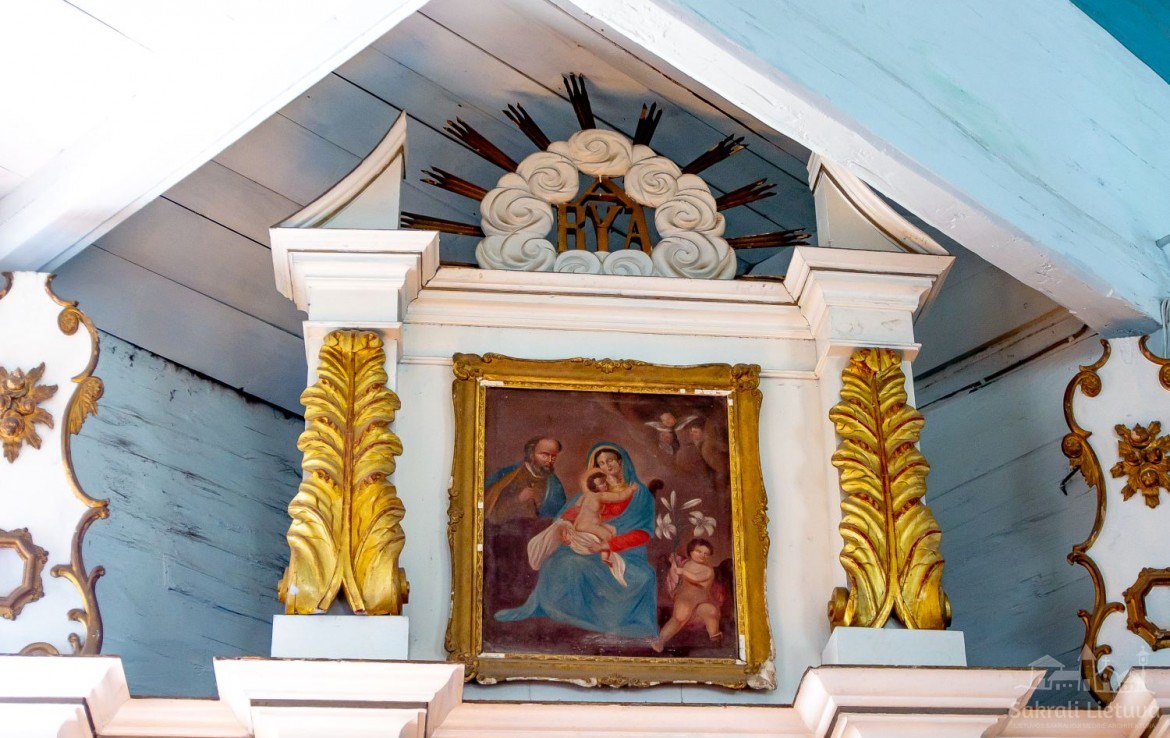 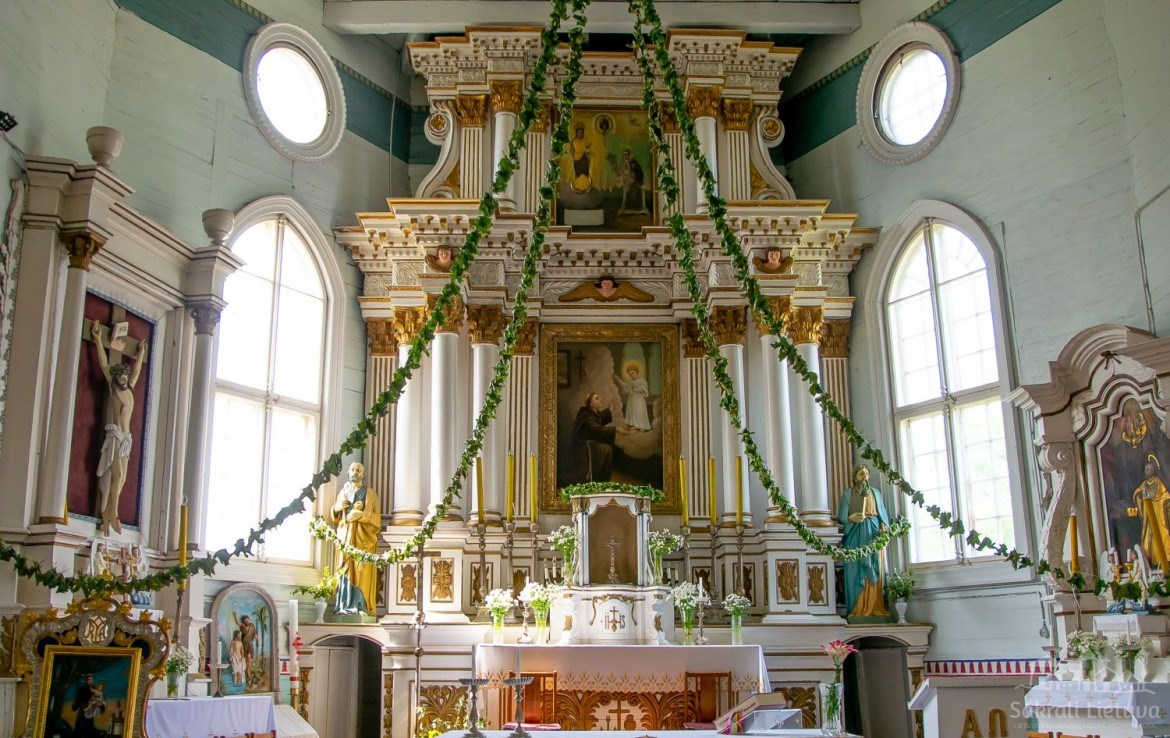 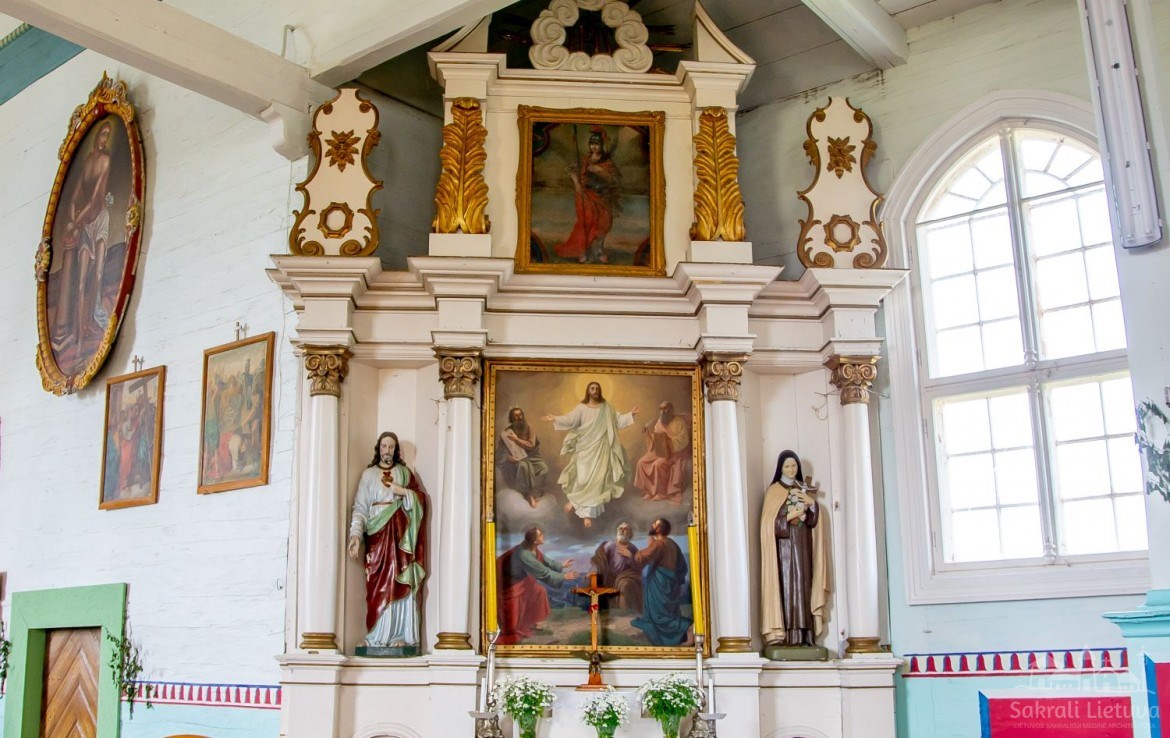 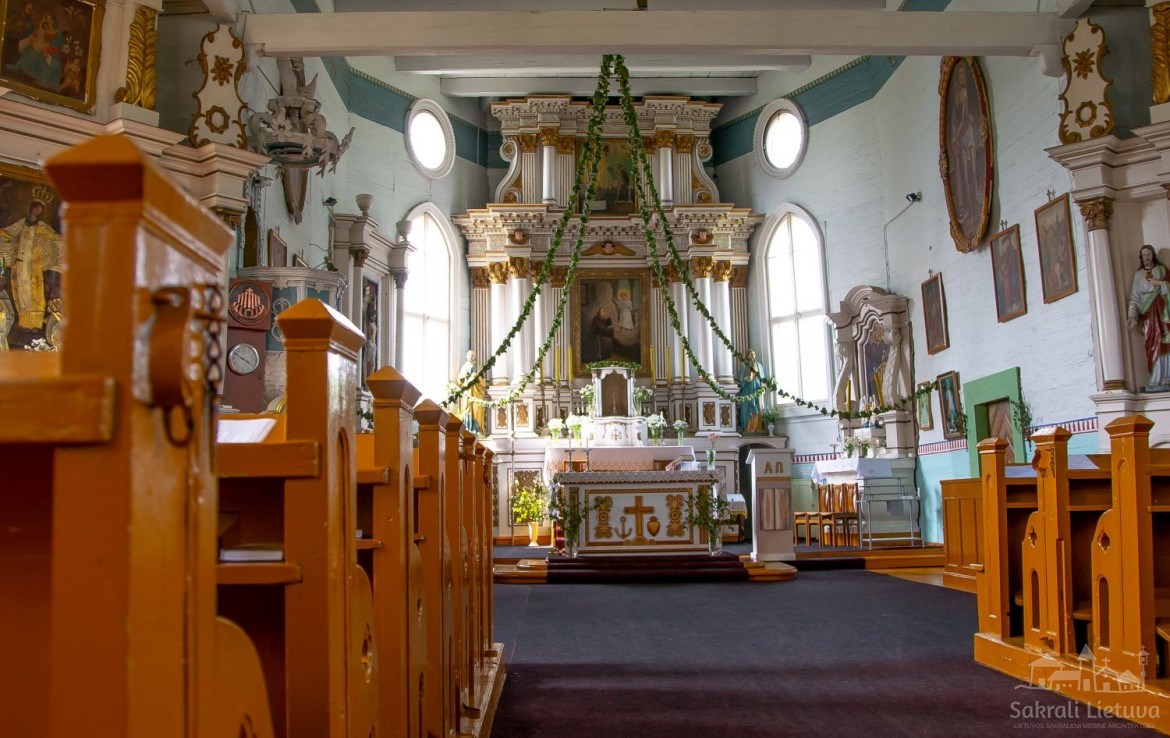 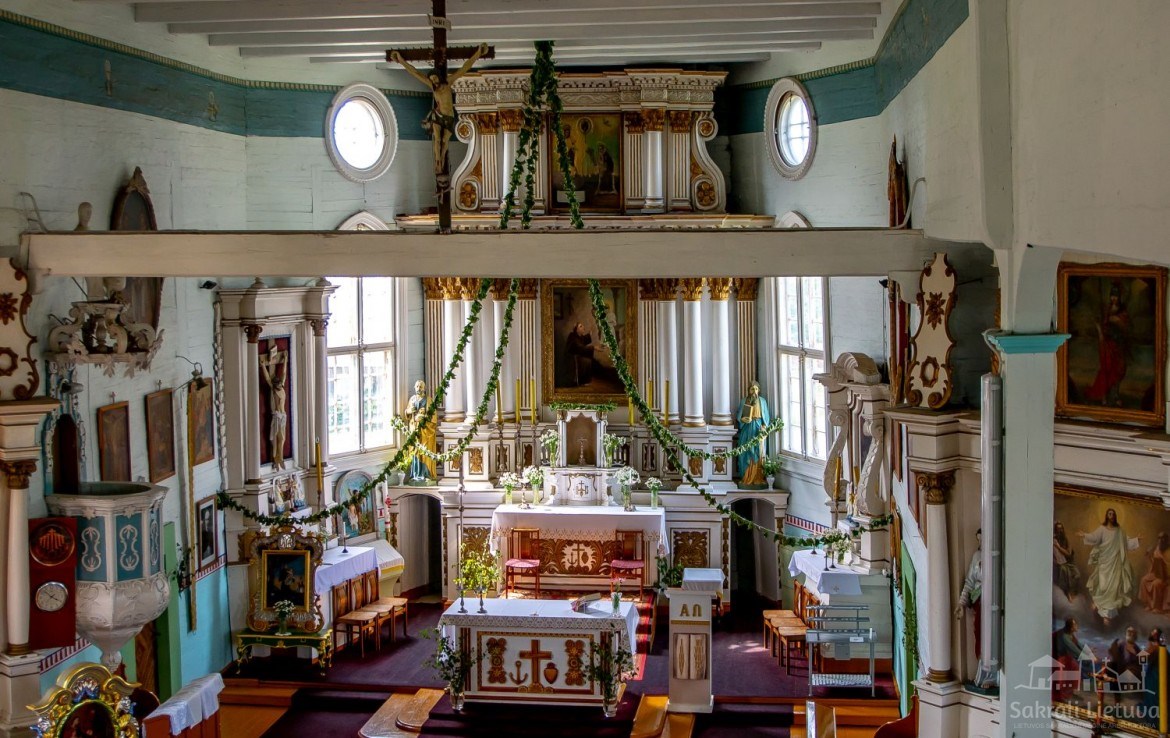 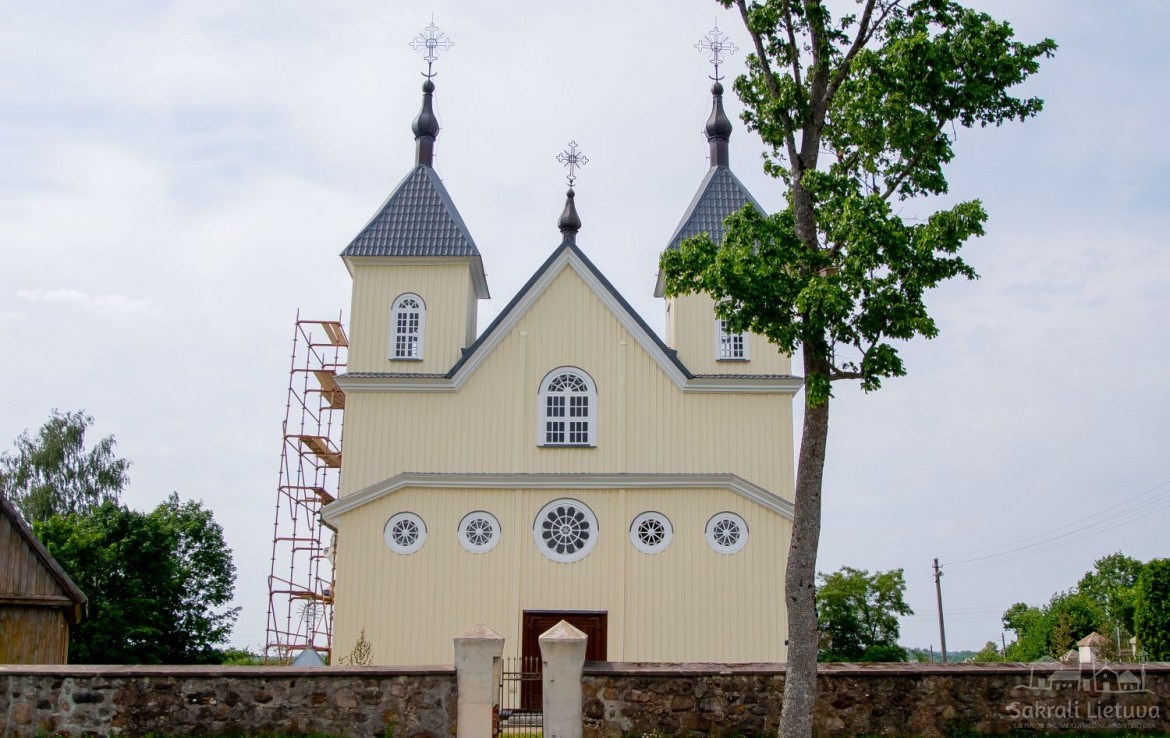 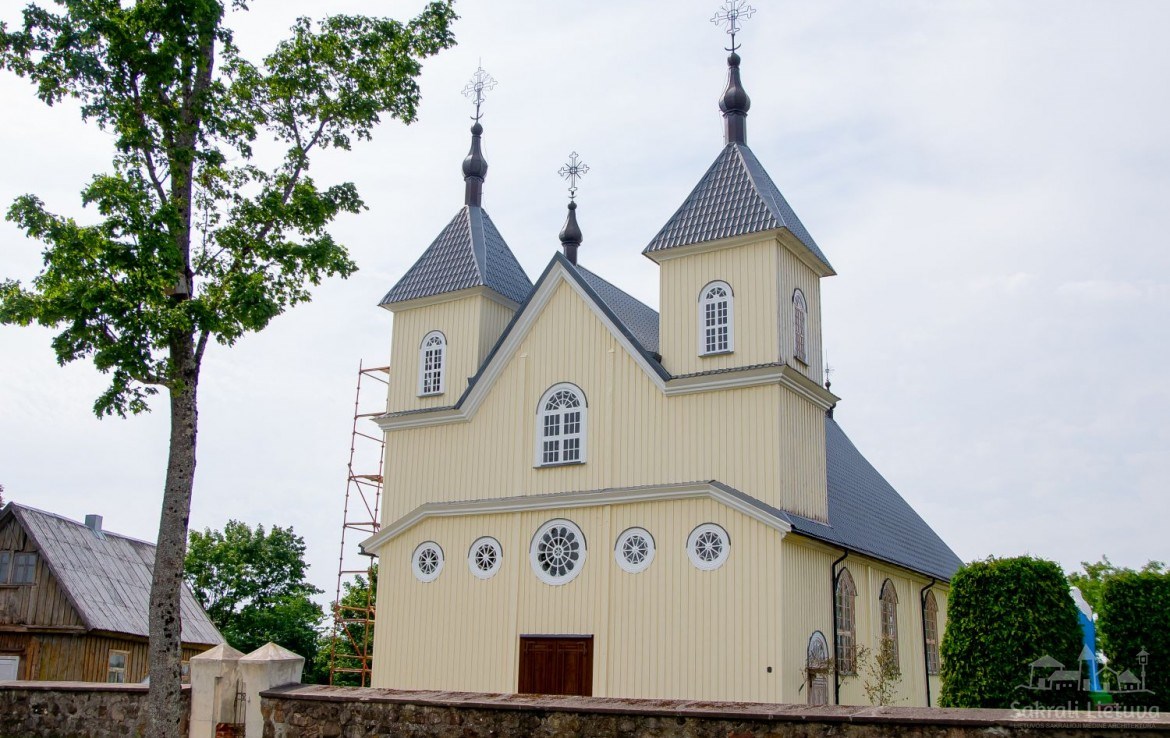 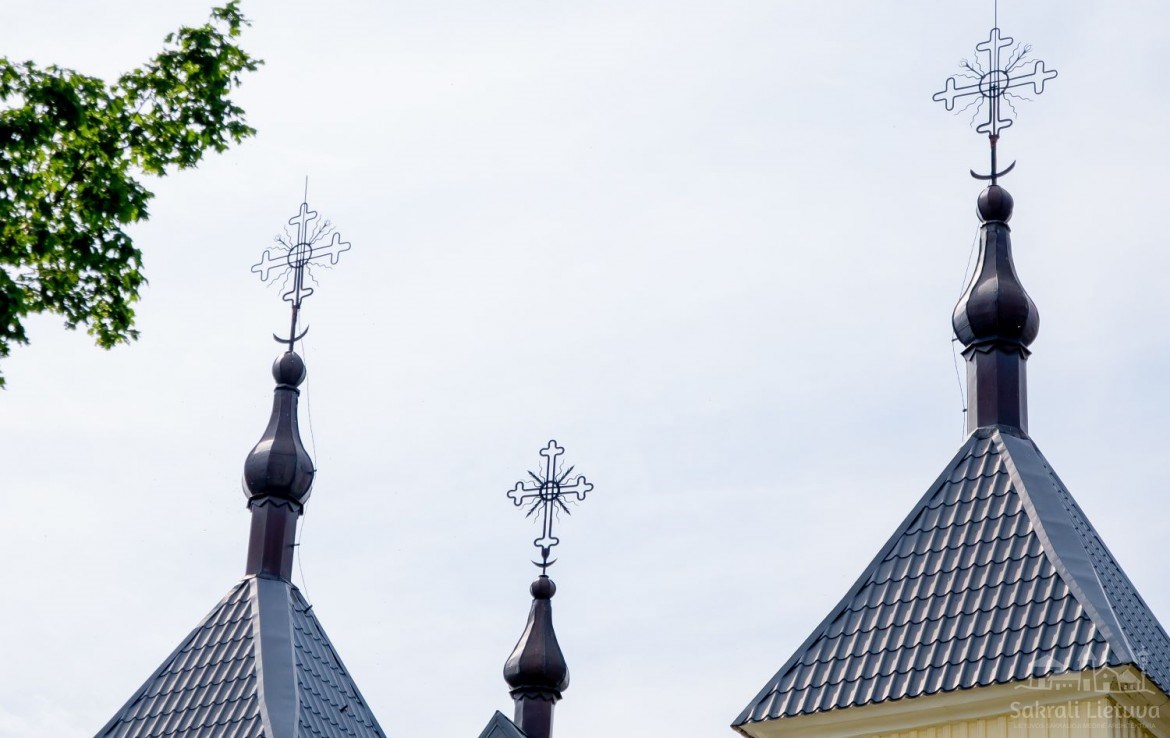 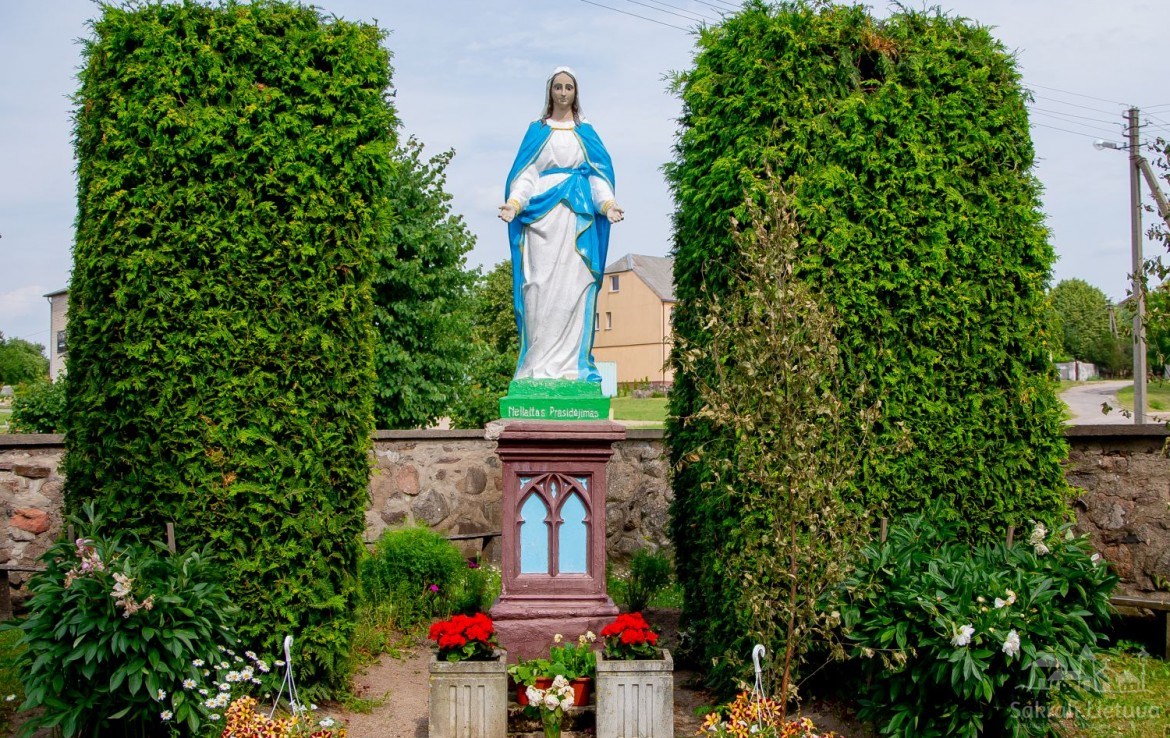 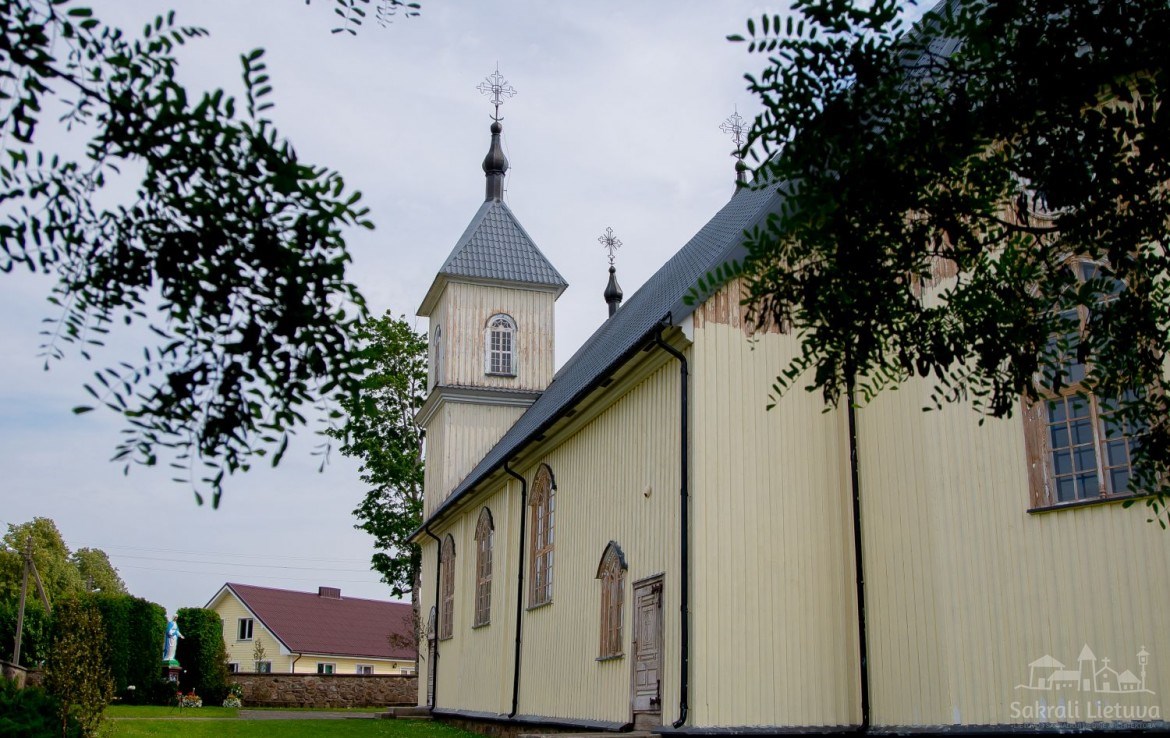