Till the second half of the 18th century, Janapolė was known as Viržuvėnai, which was the boundary of the Curonian and Lithuanian lands. In 1421–1842, this area belonged to Samogitian bishops. In 1762, the Samogitian Bishop Jonas Domininkas Lopacinskis built a residence in Viržuvėnai and lived there. The parish there was established quite late, at the end of the 18th century. In 1776, a valakas of land and a money foundation were assigned to the church. Probably it was then that the Bishop willed to rename the area and call it Janapolė. In 1815, the church was rebuilt as initiated by the Bishop Juozapas Arnulfas Giedraitis.

The church of folk architecture forms is of a rectangular plan, with a high roof covered with sheet steel, a two-section turret and a sleek-shaped peak above the apse. A narrow apse2 with a wider, three-sided roof forming recesses stands out against the rear facade. The building is wooden, with the walls made of horizontal, sawn and hewn logs joined at the corners, and with the facade boarded vertically. The plinth is made of stone, the overlay is made of wooden beams, and the roof structure is made of wood. Sacristies of a rectangular layout are located on both sides of the altar. The main entrance, with stairs and a two-leaf door boarded in herringbone pattern, is located on the axis of the central altar, with additional doors in the side walls. The central nave has six octagonal wooden pillars with capital-like tops.3 The organ area at the back of the church includes a balcony supported by wooden beams. The organ area has a hatch to the attic. Balconies are located beneath the organ area, and are reached from the side naves by stairs. The side naves include two wooden confessionals. The central and lateral naves have single inner space, their floors and ceilings are covered with boards.

The church interior of the is rich in painted décor elements: the walls have décor between the wooden ceiling beams and a frieze4, and painted ornaments with the monograms of Mary, Christ, liturgical accessories, red cartouches5 and stylized acanthus leaves decorated with oil paint. Window trims are also painted. The windows, altars, the organ case, the pulpit-confessional are wooden, and the décor details are painted in gold-imitation color. The church organ case and a cross made in 1829 have survived to date.

The church has four altars. Historical sources mention that the parishioners raised funds to make a new great altar in 1835. Its central part included a painting of St. John the Baptist; and the tope one – a titular painting of St. Michael the Archangel. The latter has survived to date, while the central picture was replaced by a painting of Our Lady of Czestochowa with metal casing in the late 19th century. The great altar of Baroque style is richly decorated with sculptures and carvings. The altars were renovated: some in 1896, others in 1905, and the entire interior was restored in 2011-2014.

The churchyard fence is made of stonework and incorporates a wooden belfry. The traditional folk-style belfry is a frame one, boarded with vertical slats. It consists of two sections with small roofs, with the second section having a smaller base area than the lower one. One section includes asymmetrically arranged windows, and in the other – a wooden, two-leaf acoustic door made at the end of the 20th century. The belfry has two bells with inscriptions: WARDU SZWEИTA JOИA // *IZDELIE ZAVODA BR. USATSNOVIX NOVOGORODSKOI GUBERNII.

A wooden chapel in the churchyard consists of two sections, and has a roof covered with sheet steel and a sleek-shaped pedestal topped with an ornamented metal cross made by a blacksmith. One chapel facade includes a window and shutters. The chapel used to have the statues of Pieta and an Angel with a Candle that are missing, but an icon of Our Lady of the Gate of Dawn, mother of Mercy, has survived to date. 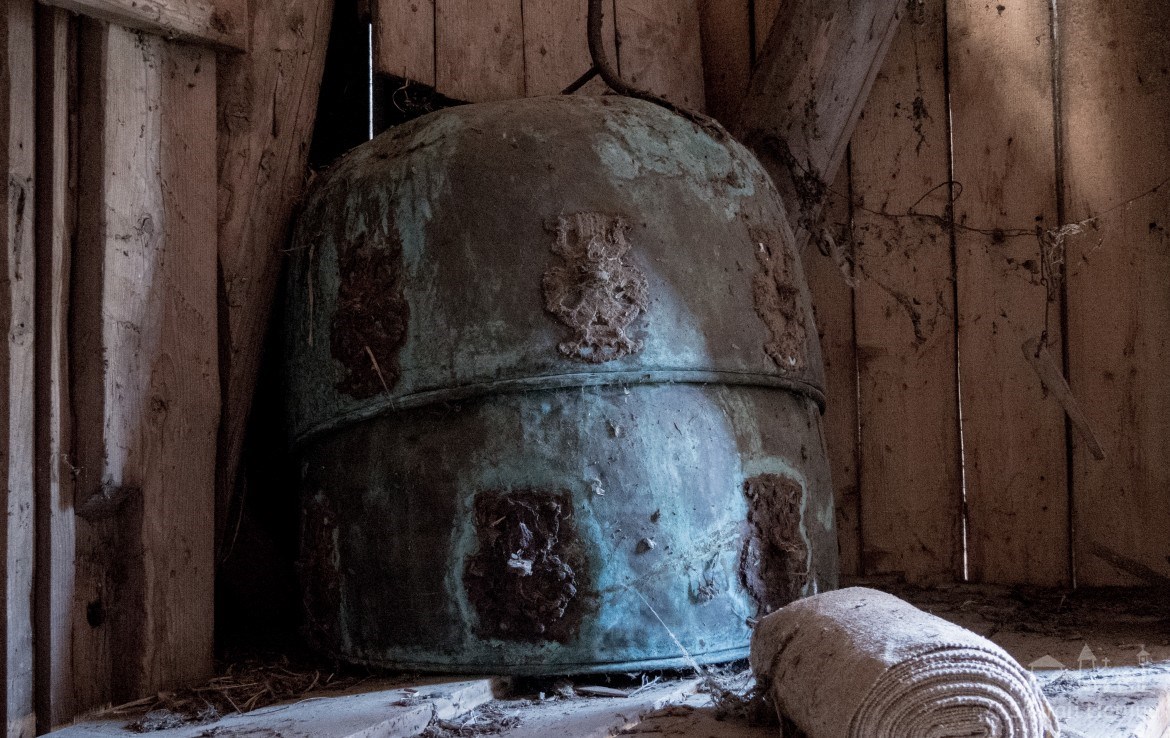 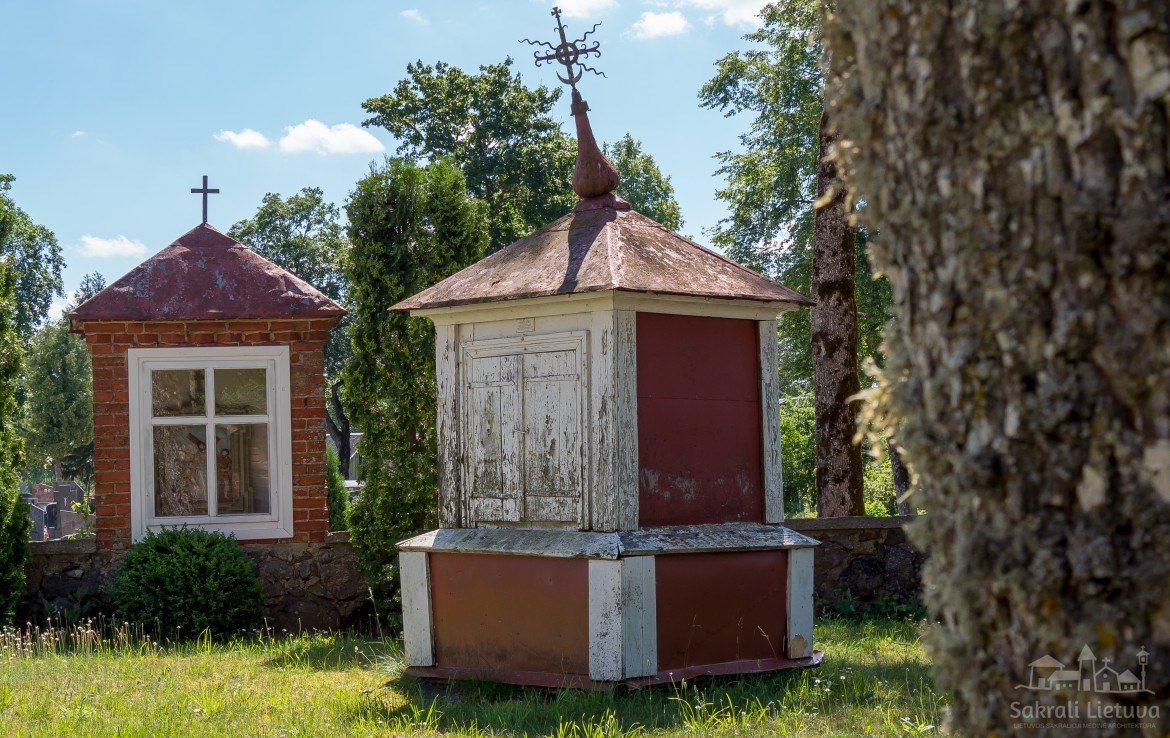 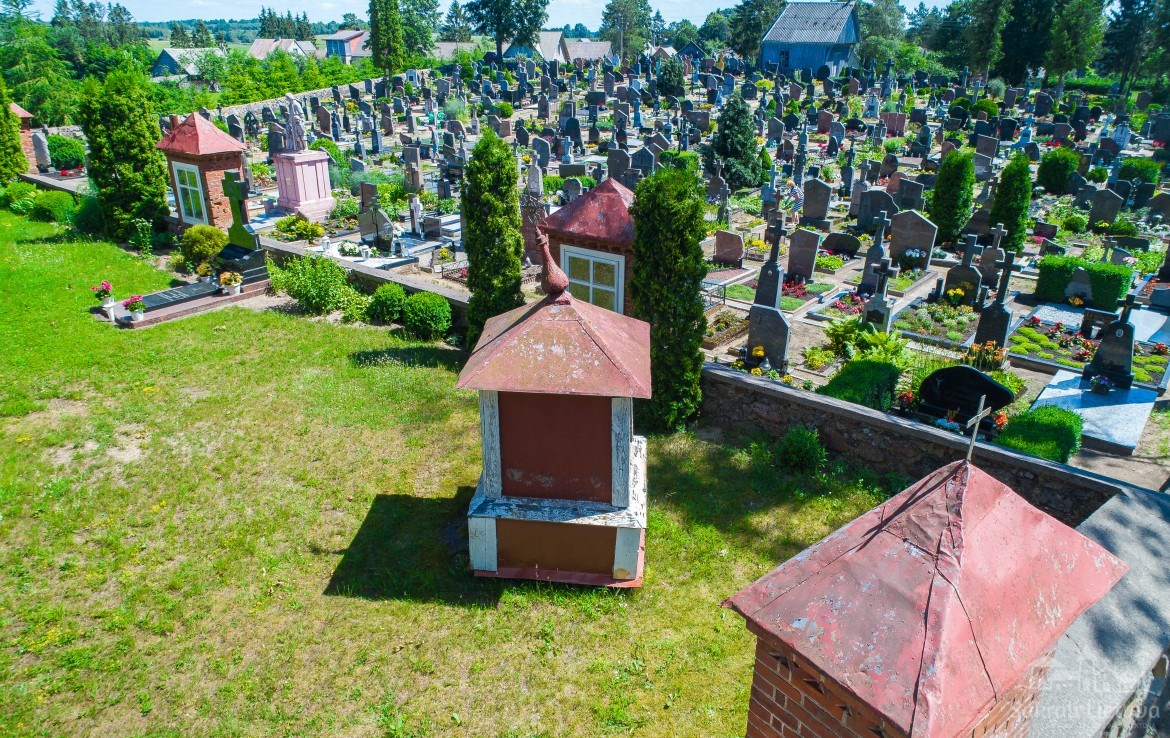 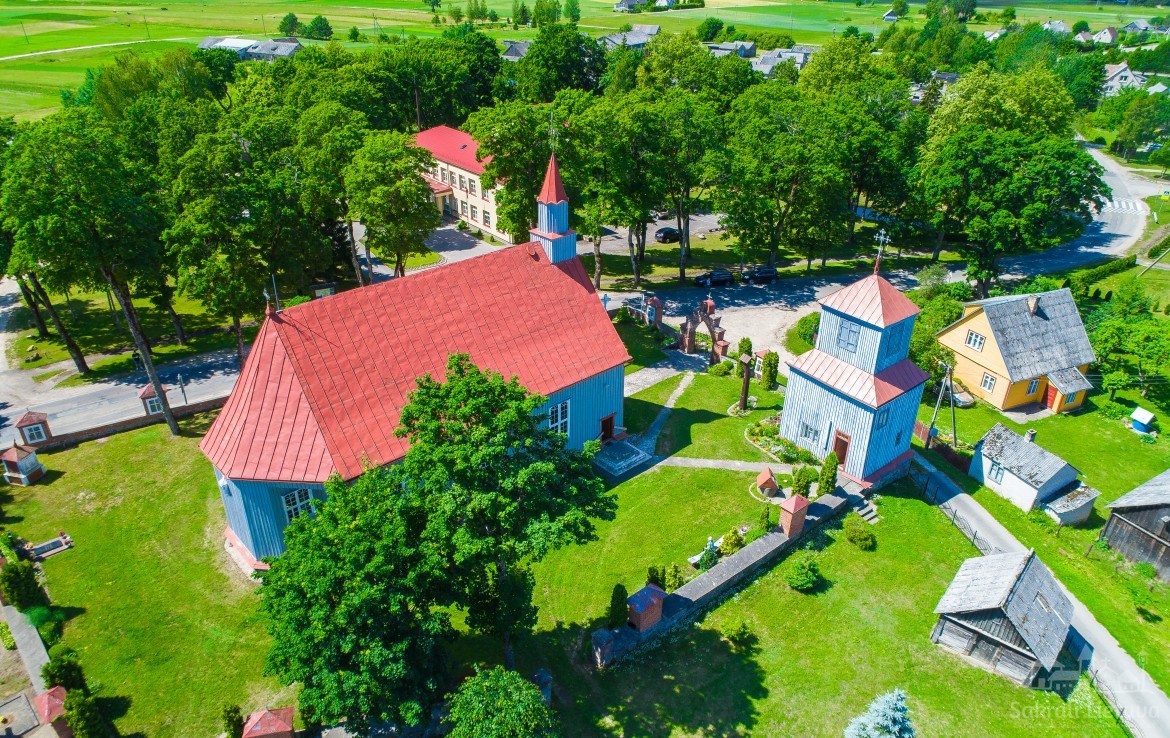 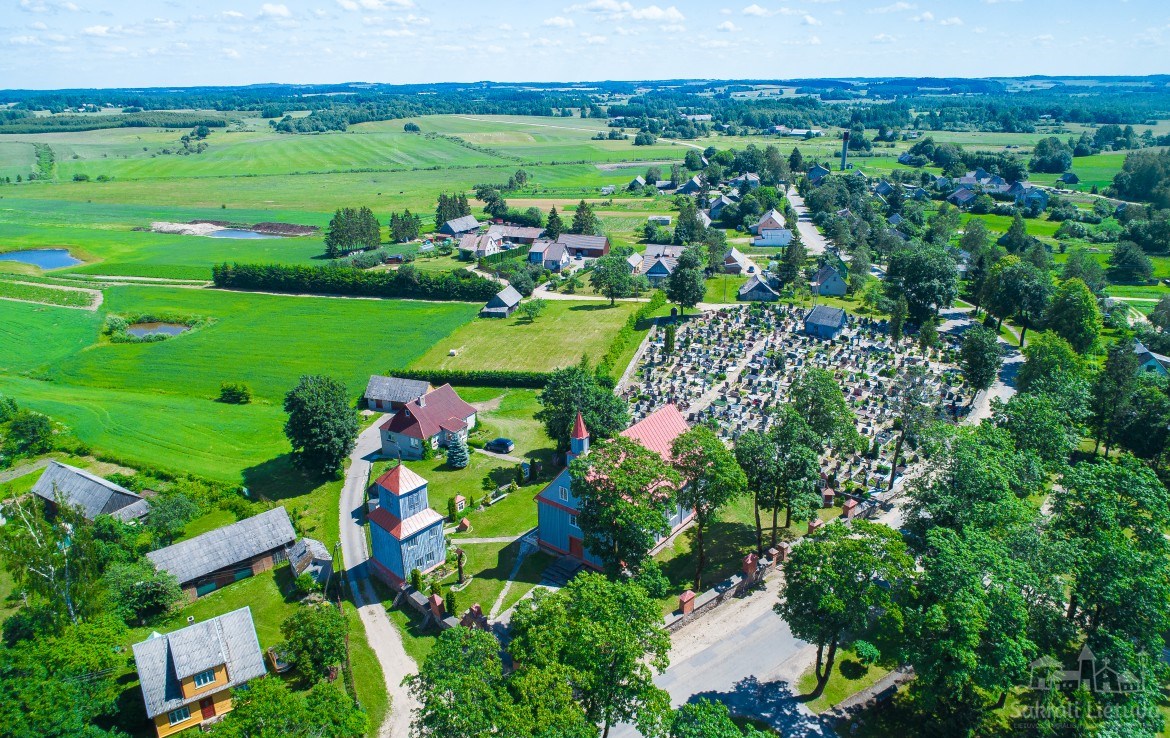 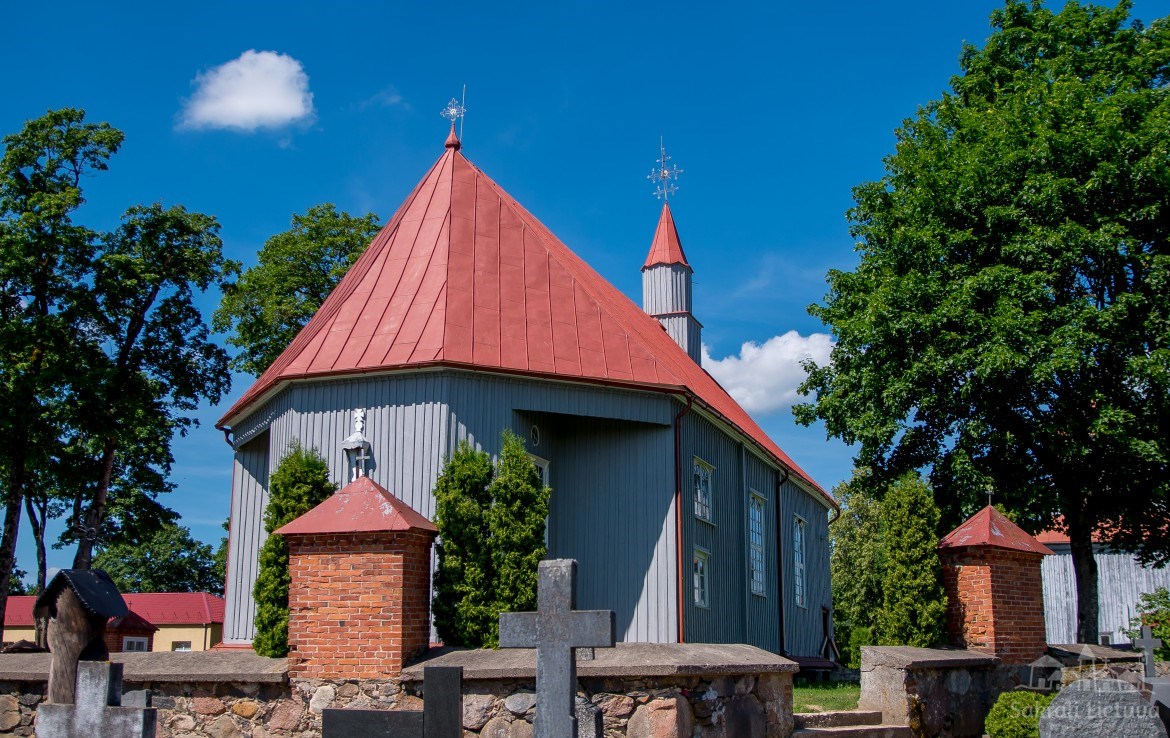 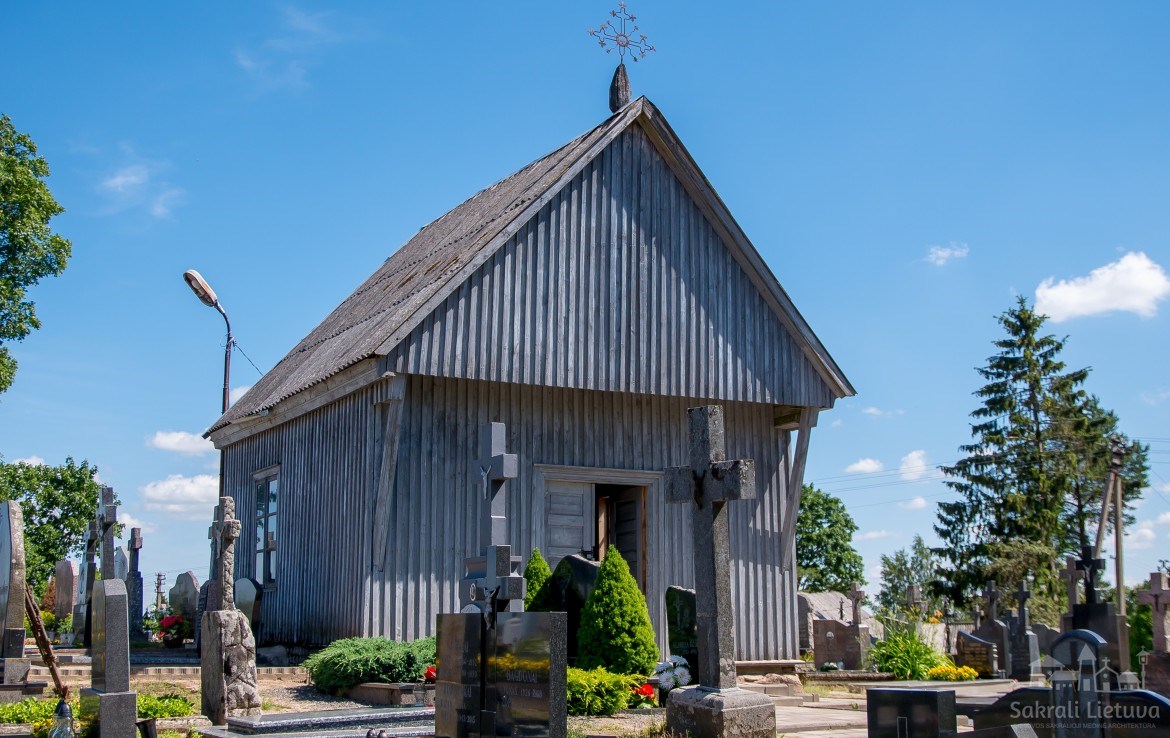 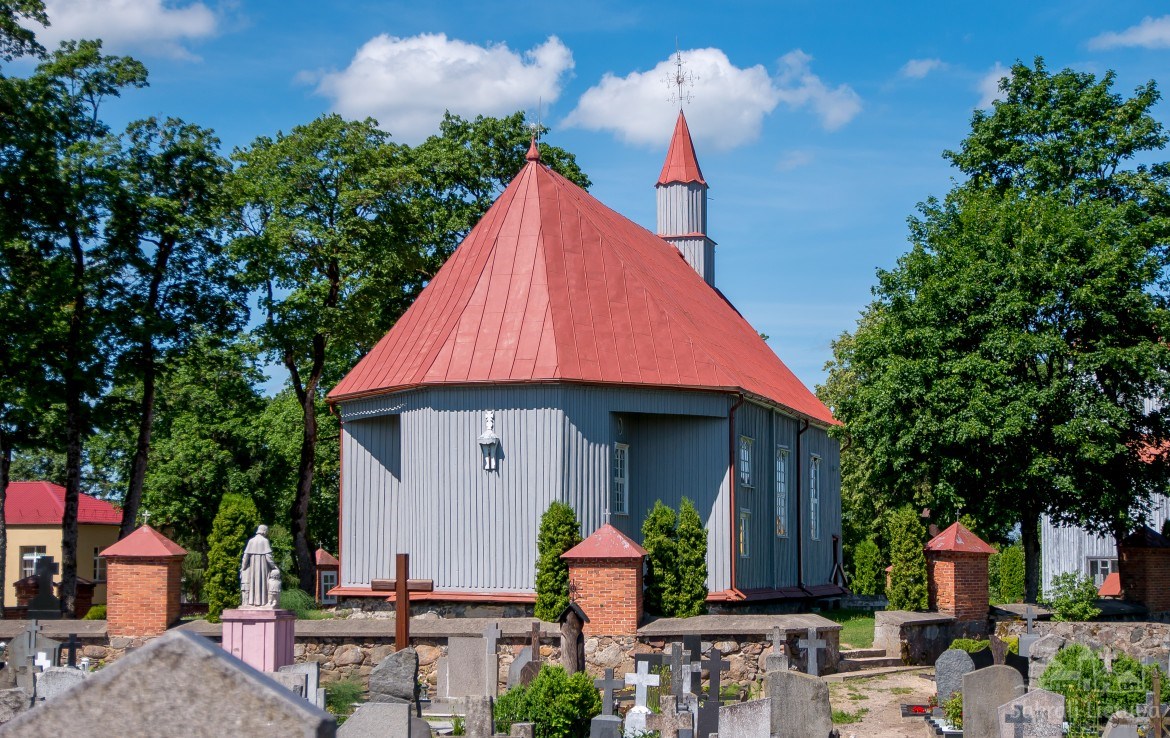 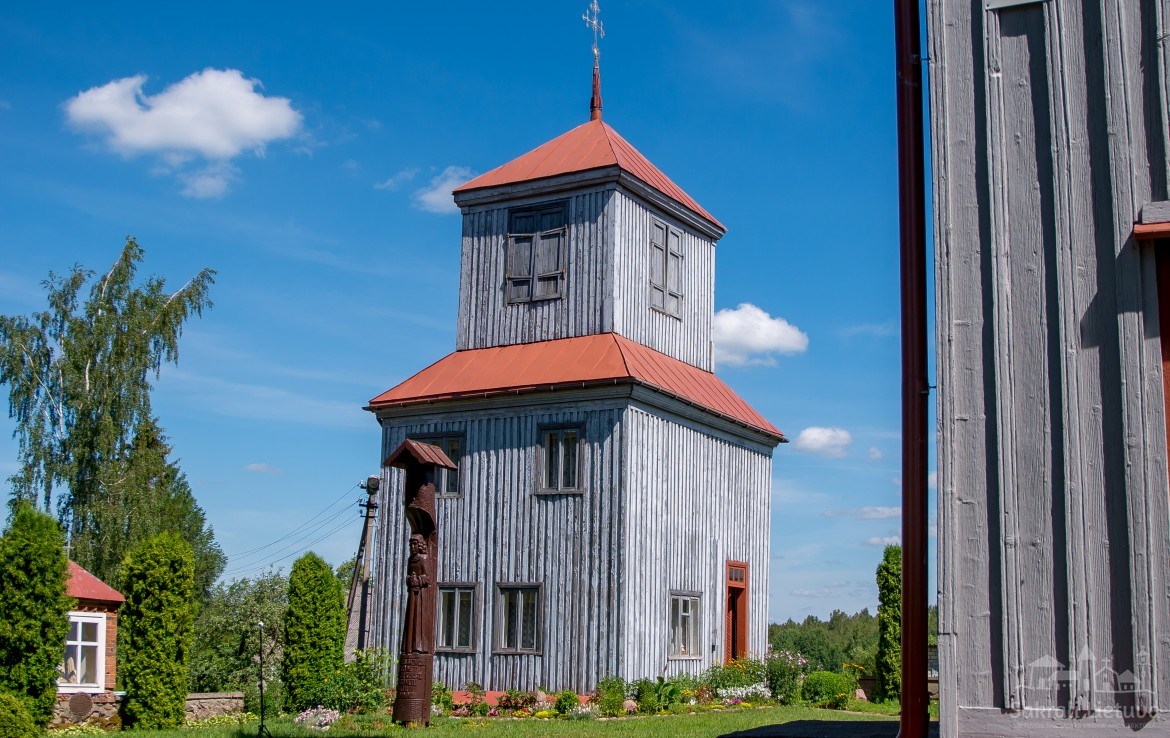 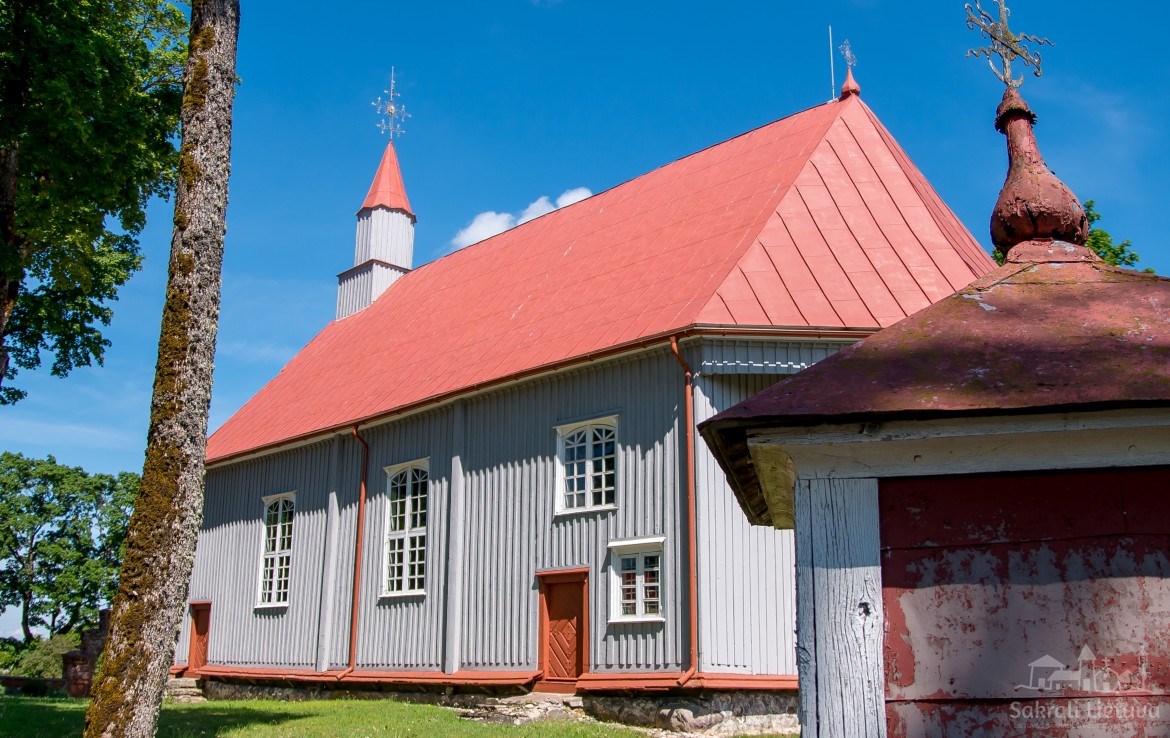 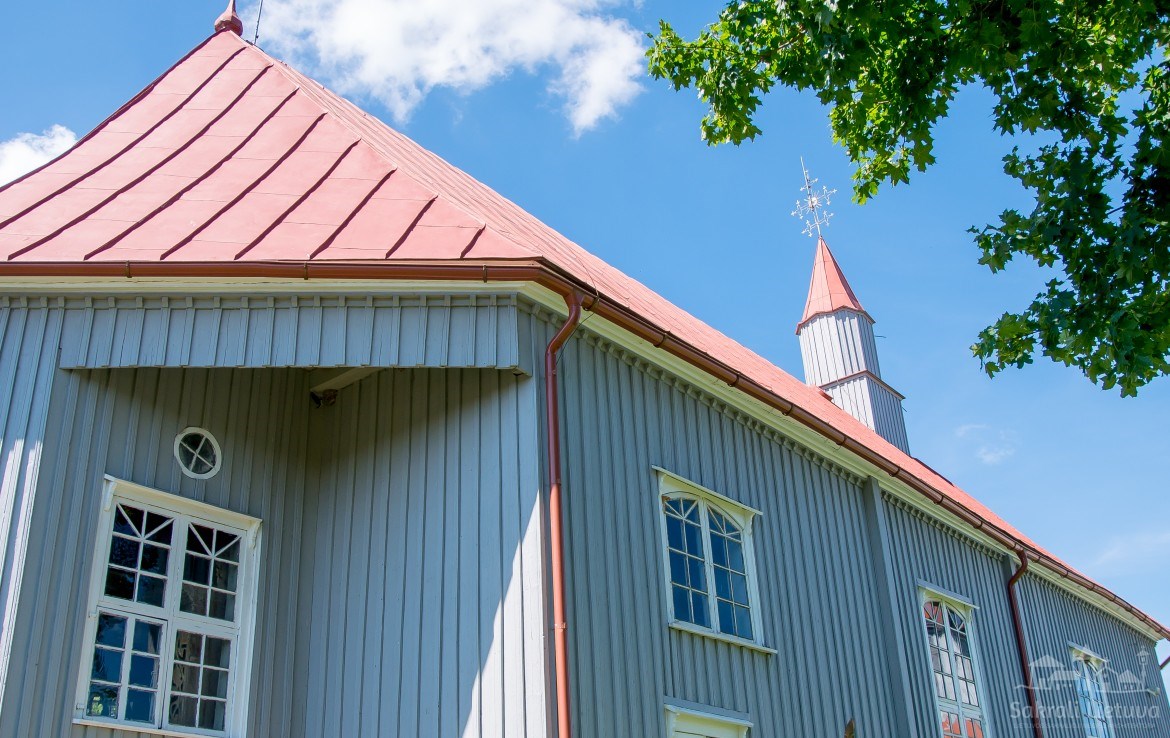 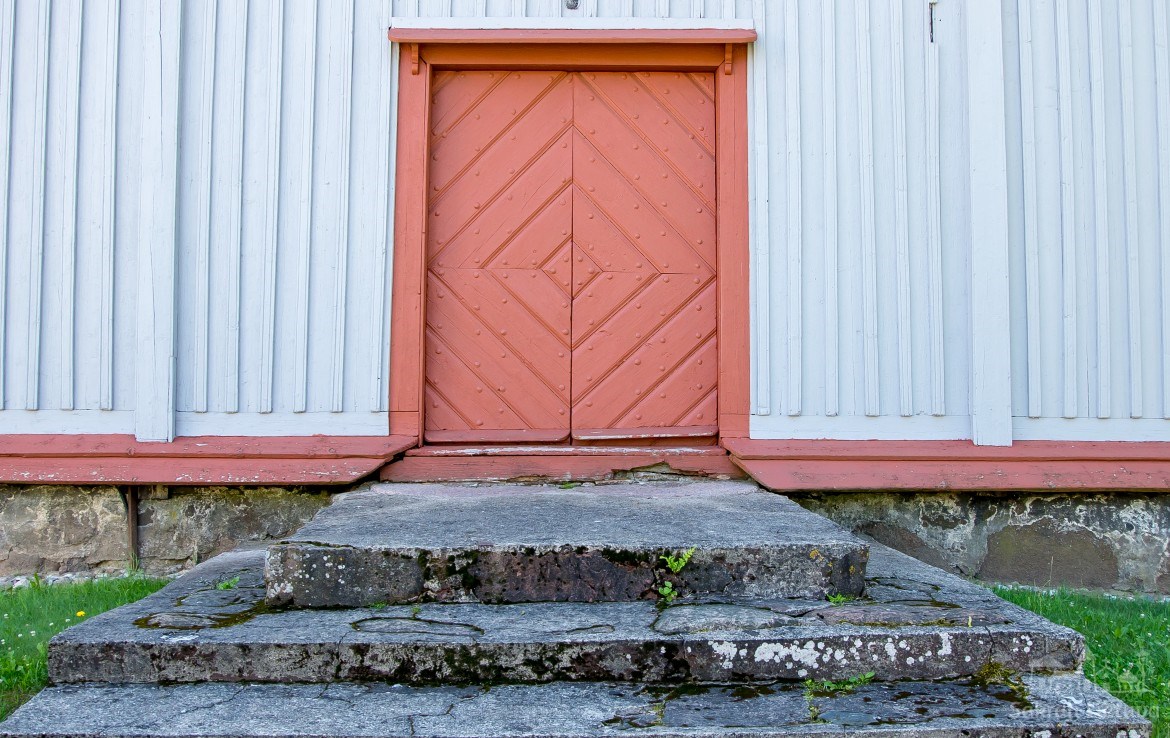 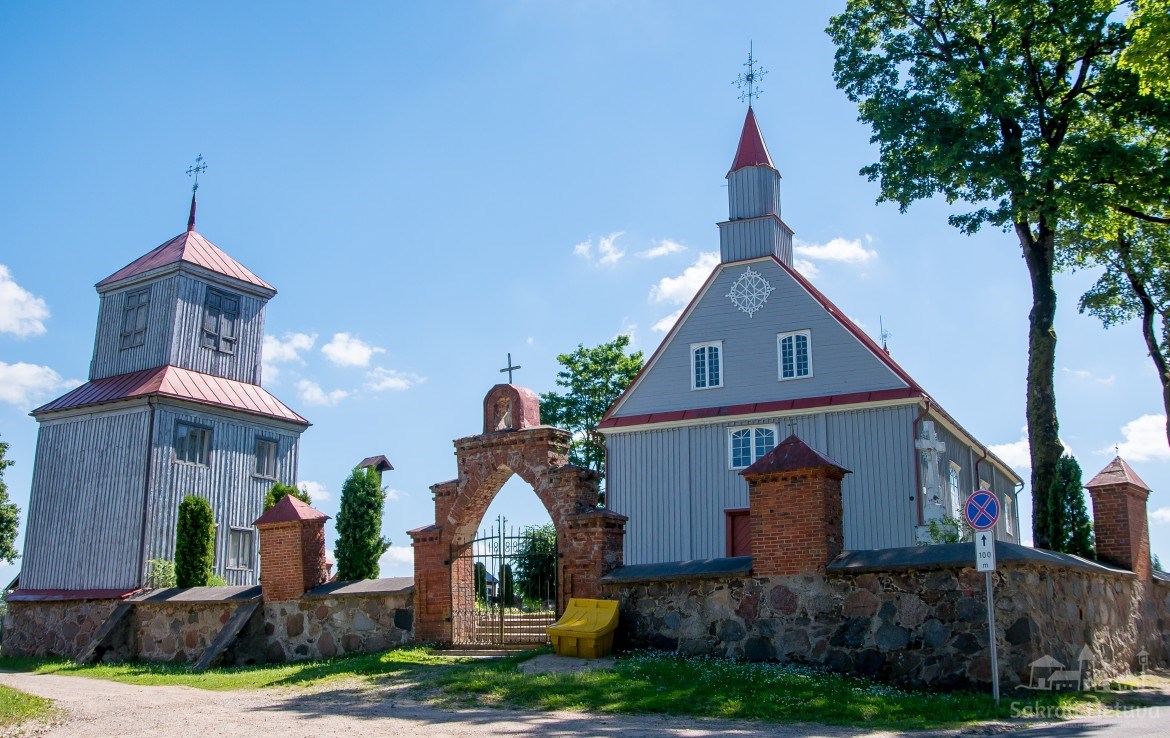 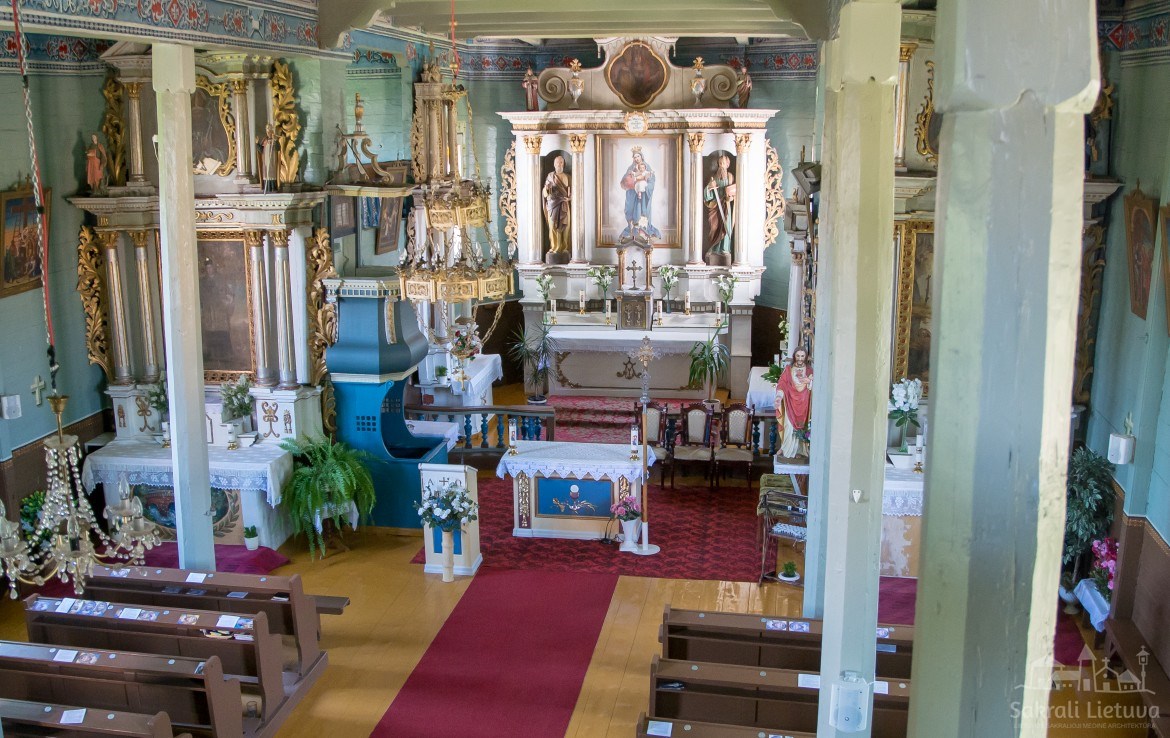 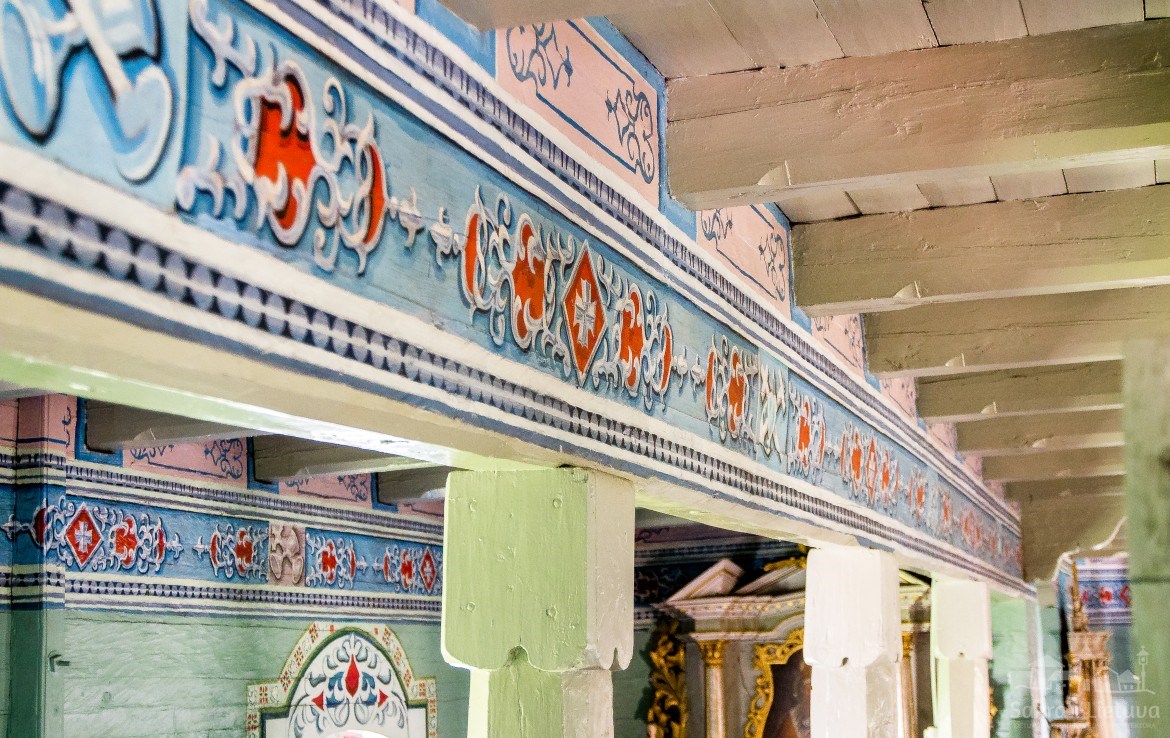 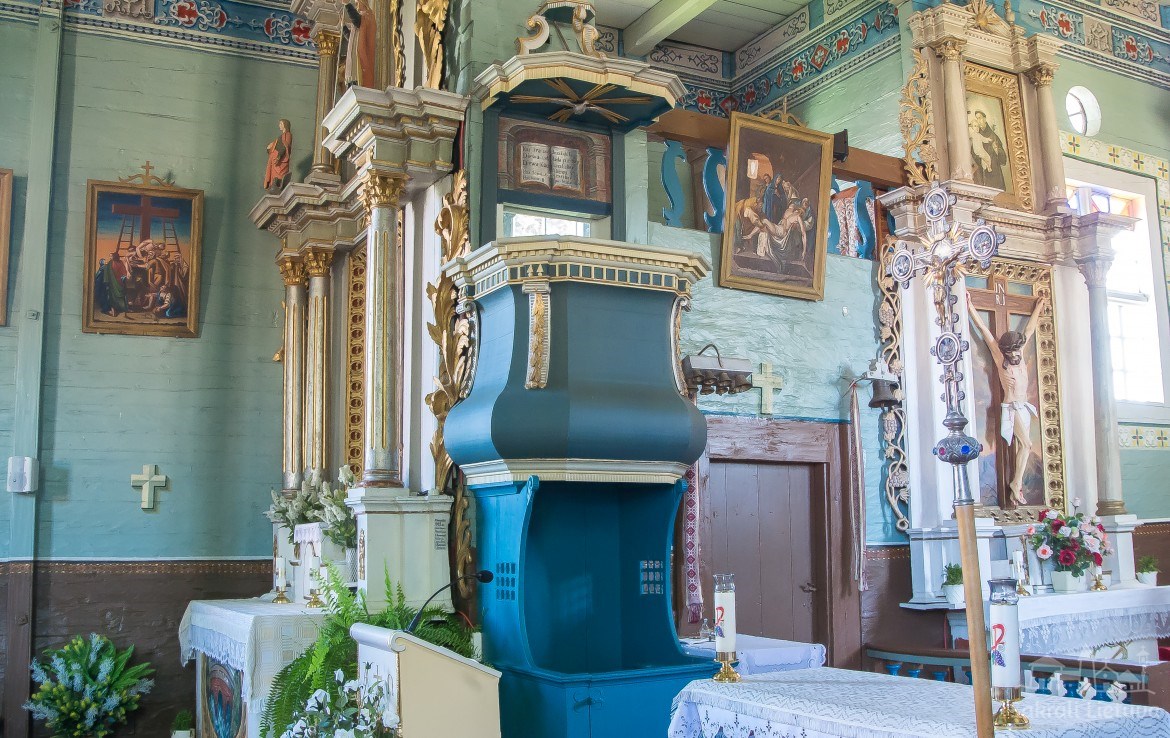