The present location of Ilguva was first mentioned in 1583, but at that time it was called Panykiai. In the middle of the 18th century, the manor and several neighboring folwarks were bought by the pastor of Veliuona, Viktorinas Grincevičius-Ilgauskas. In 1765, the first wooden church was built there thanks to him. After his death the manor went to his family, and the first church burned down as lightning struck it in 1813. In 1814, the landlords Grincevičius built the present wooden church. In 1907-1909, a branch of Žiburys Society with a library. After World War II, the long-serving pastor Jonas Rakauskas repaired the church. In 1940, the manor was nationalized by the Soviet authorities. It established a retirement home for the elderly and the disabled, and later some of the buildings that had belonged to the manor were reconstructed. Since 2010, the boarding house was renamed and known as a social care home.

The church building is of folk style, of a rectangular layout, it has three naves and a rectangular apse, with a sacristy extending the space of the right nave. There is a basement under the presbytery. The facades of the church are boarded with vertical thin planks, and the building perimeter above the pedestal is boarded with wooden planking, and a wooden profiled cornice decorates the eaves. The windows are rectangular with profiled edging, window sills, and dripstones. The south facade has a cross with the Crucifix sculpture. Ornamental, rotund-shaped turrets with rounded and sheet steel covered helms, topped with metal ornamented crosses are located in the center of the roof, above the main facade and sacristy. The main entrance door is wooden, two leaf, made of two layers, and boarded on the outside in diamond pattern, with metal hinges and wooden profiled edging.

Inside the church, the central nave vault rests on 4 columns. The organ balcony with a wooden balustrade railing is also supported by 4 columns. The second stage of the great altar of the Exaltation of the Holy Cross, includes a sculpture group of the Crucifixion of Christ and the sculptures of the Apostles St. Peter and St Paul. The paintings of St. Isidore and St. Anthony saints are in the right nave, and the left nave includes the Altar of the Assumption of Our Lady of Sorrows, and the picture of St. George in the second section.

Like the church, the low and massive, three-section belfry was built in the churchyard at the beginning of the 19th century. The folk architecture building is of a rectangular base, its sections are tapering upwards, and topped with small roofs covered with sheet steel. Its top is adorned with a four-sided sheet steel roof with a spike and a cross. Rectangular sound holes are located in the upper section.

Church and Belfry of the Discovery of the Holy Cross of the Ilguva Manor - Ilguva 71201, Lietuva 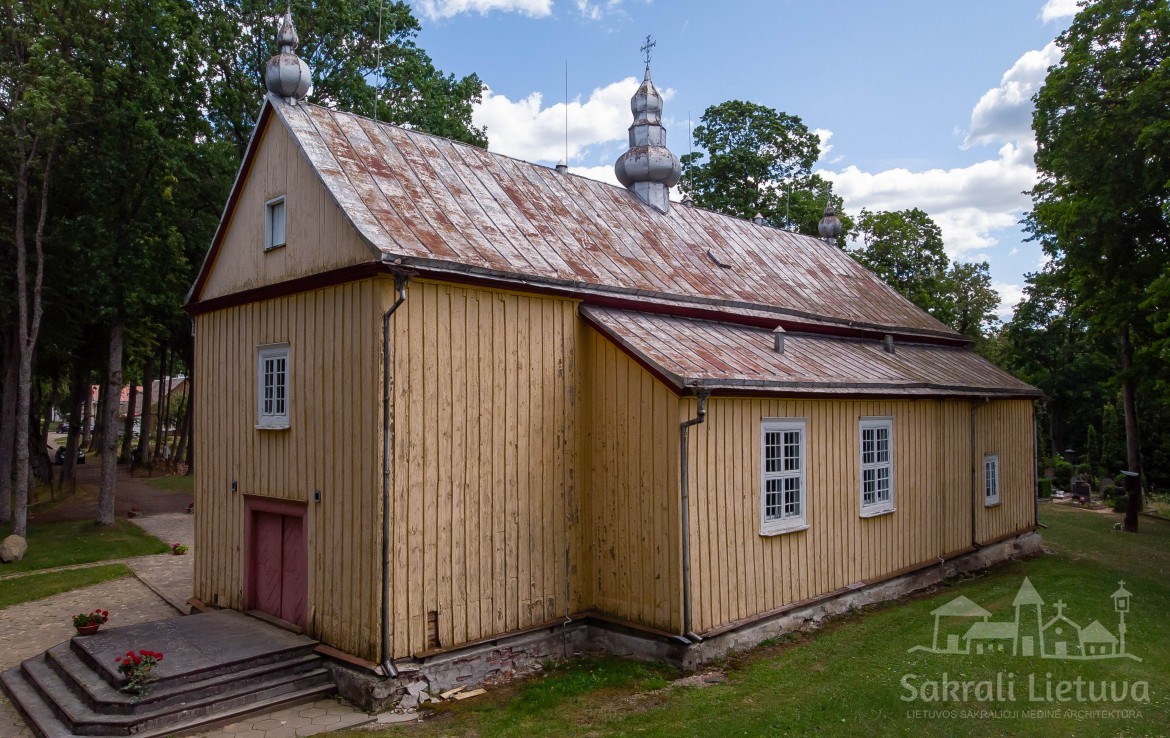 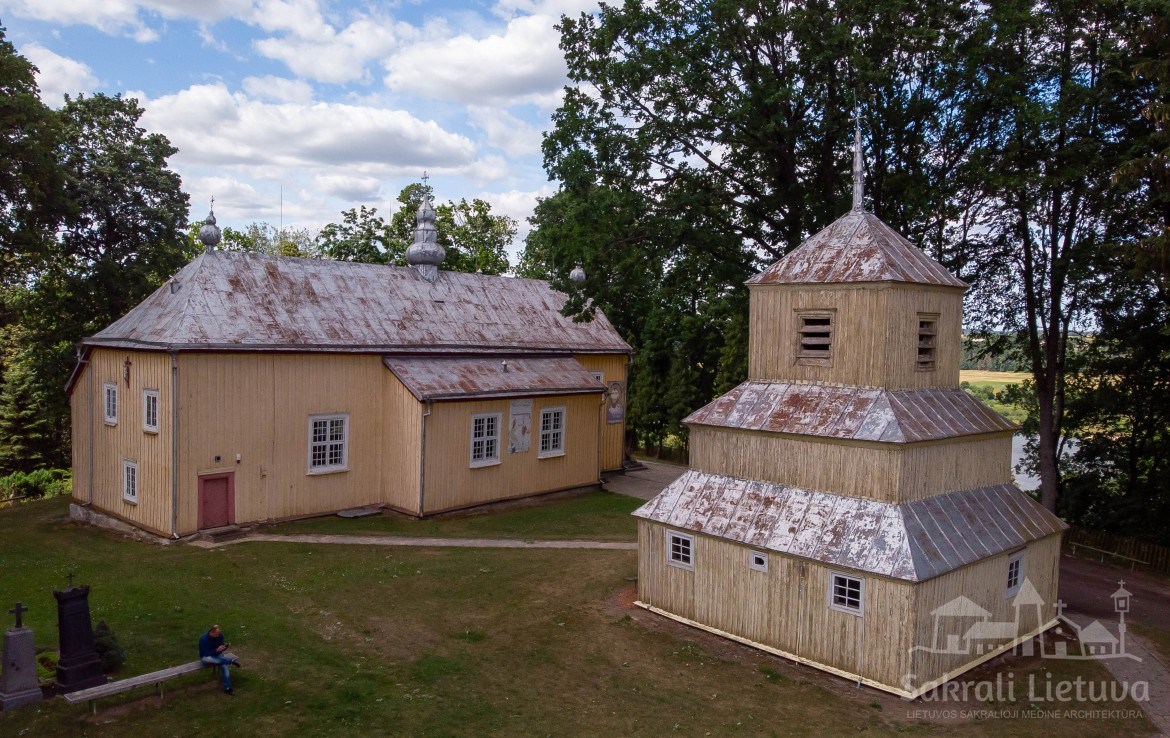 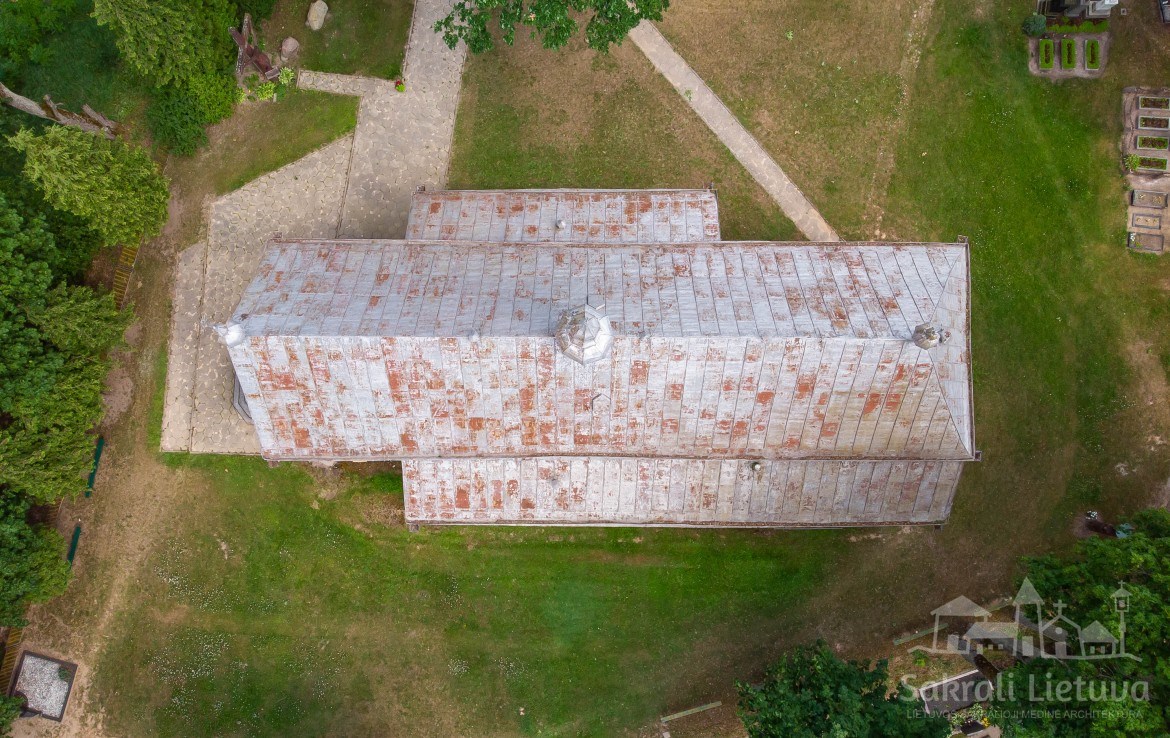 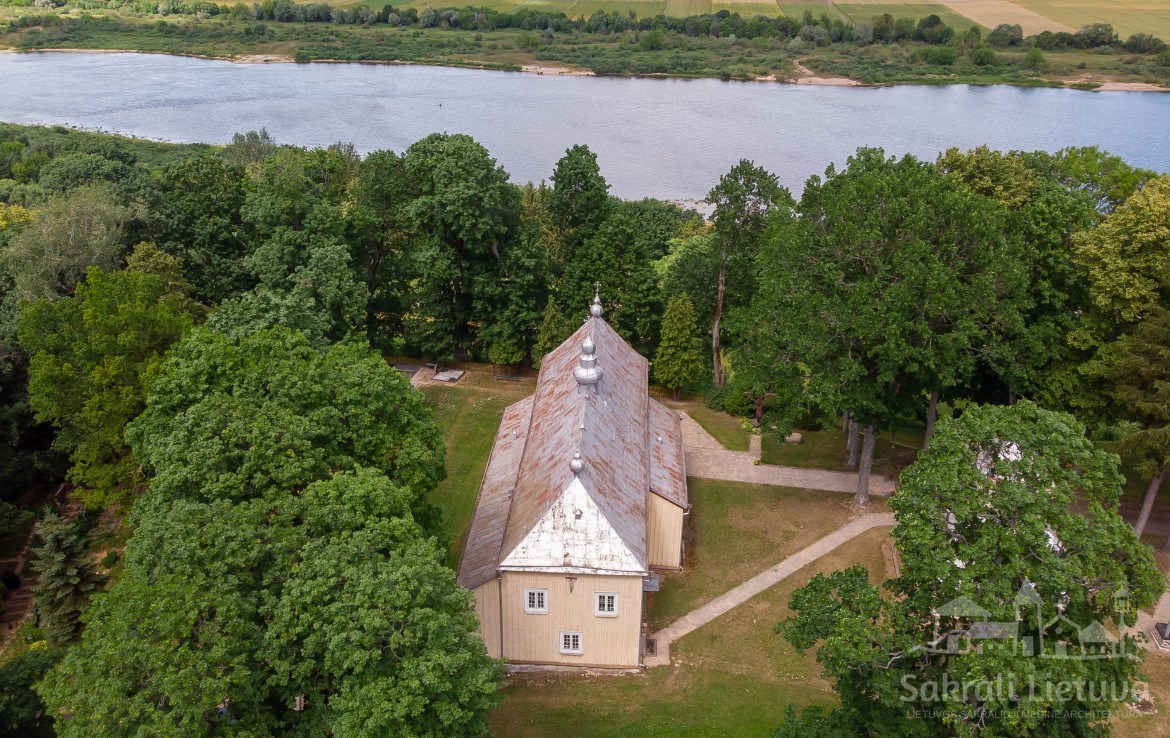 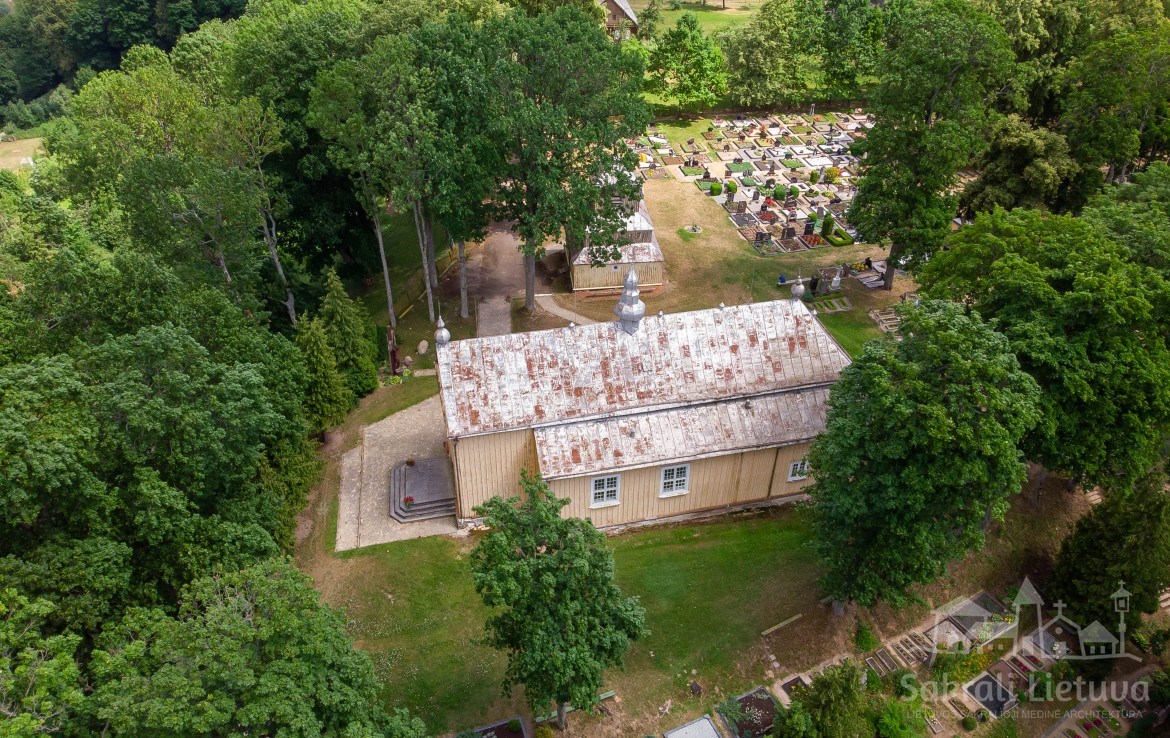 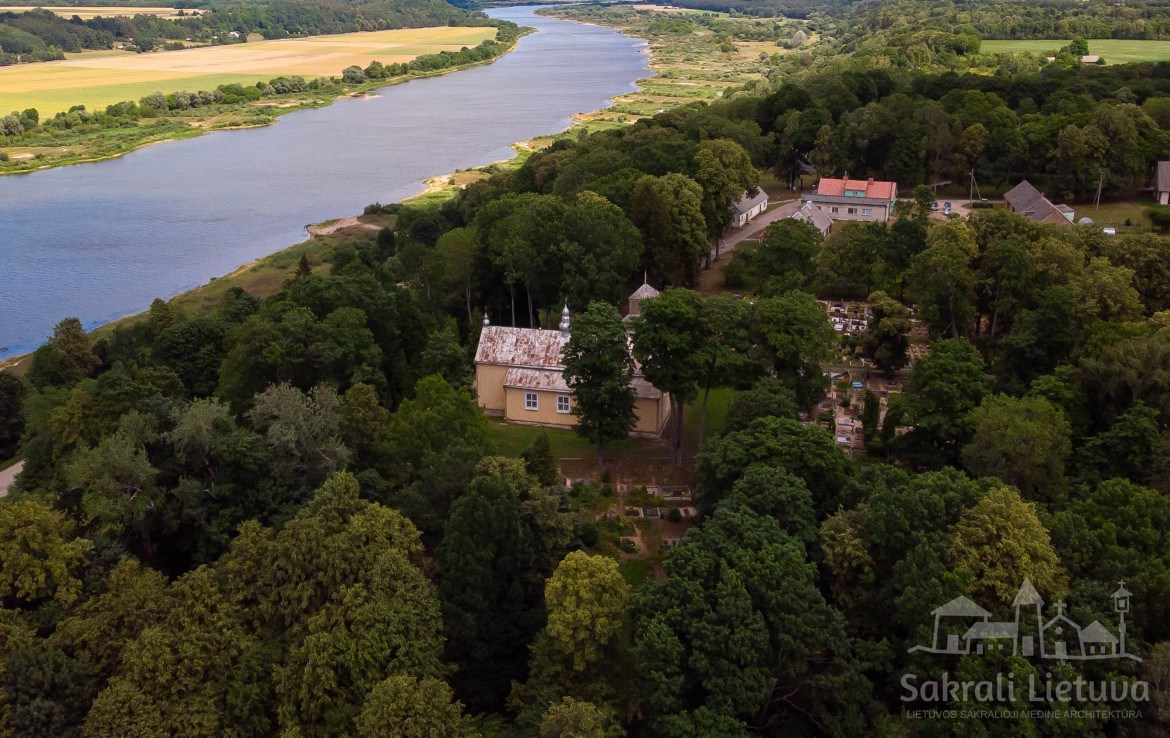 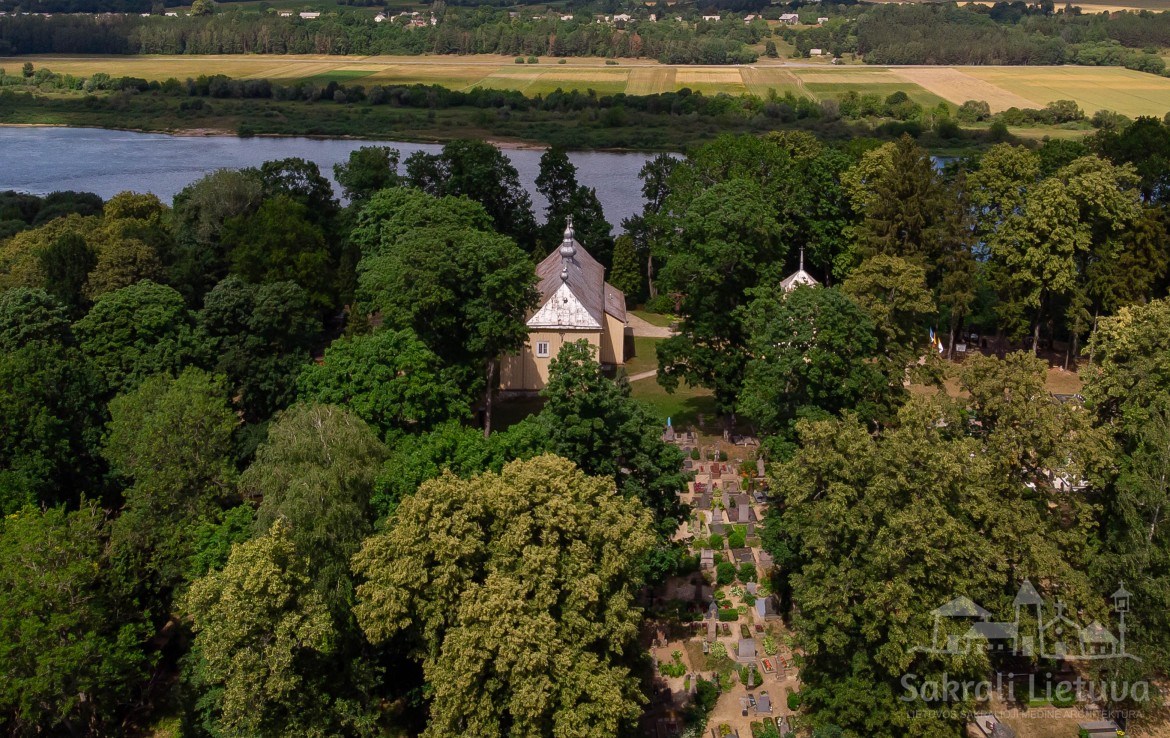 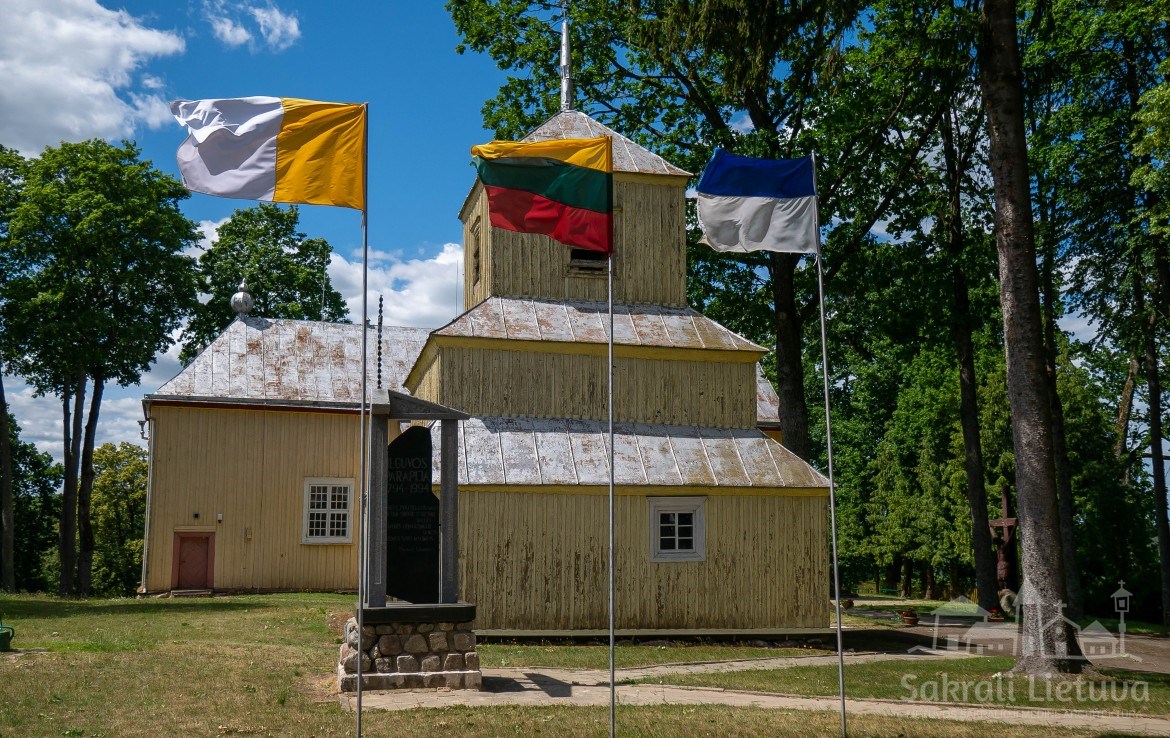 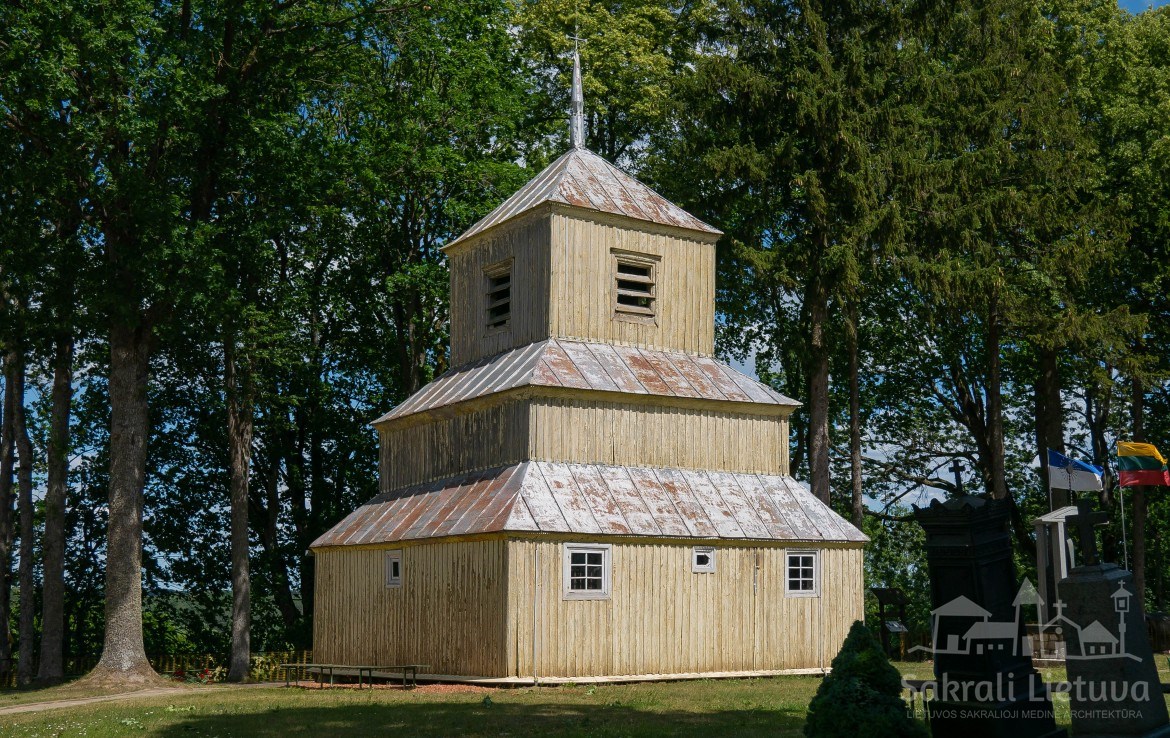 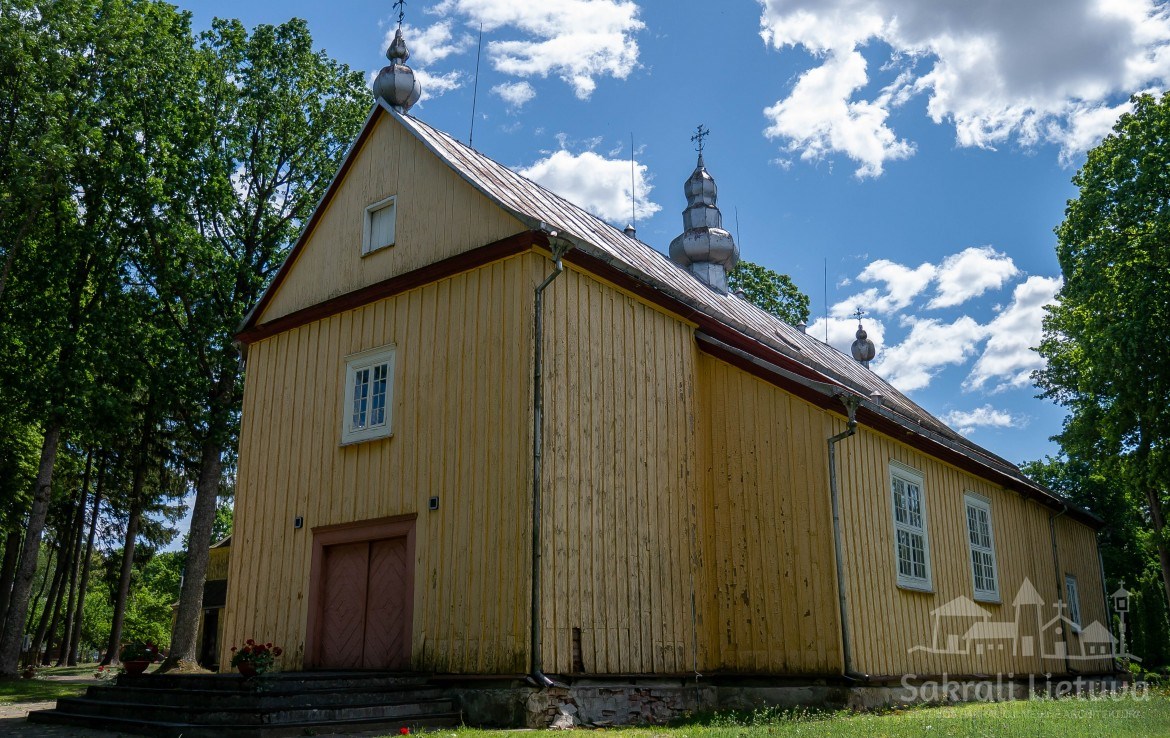 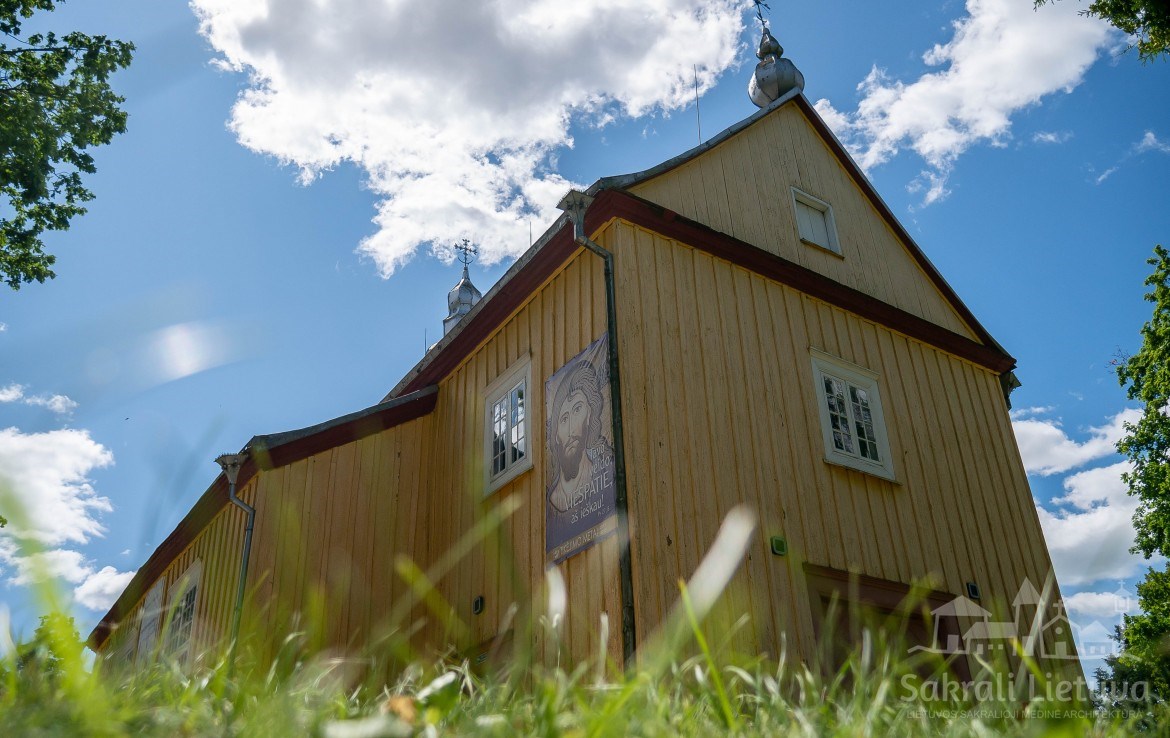 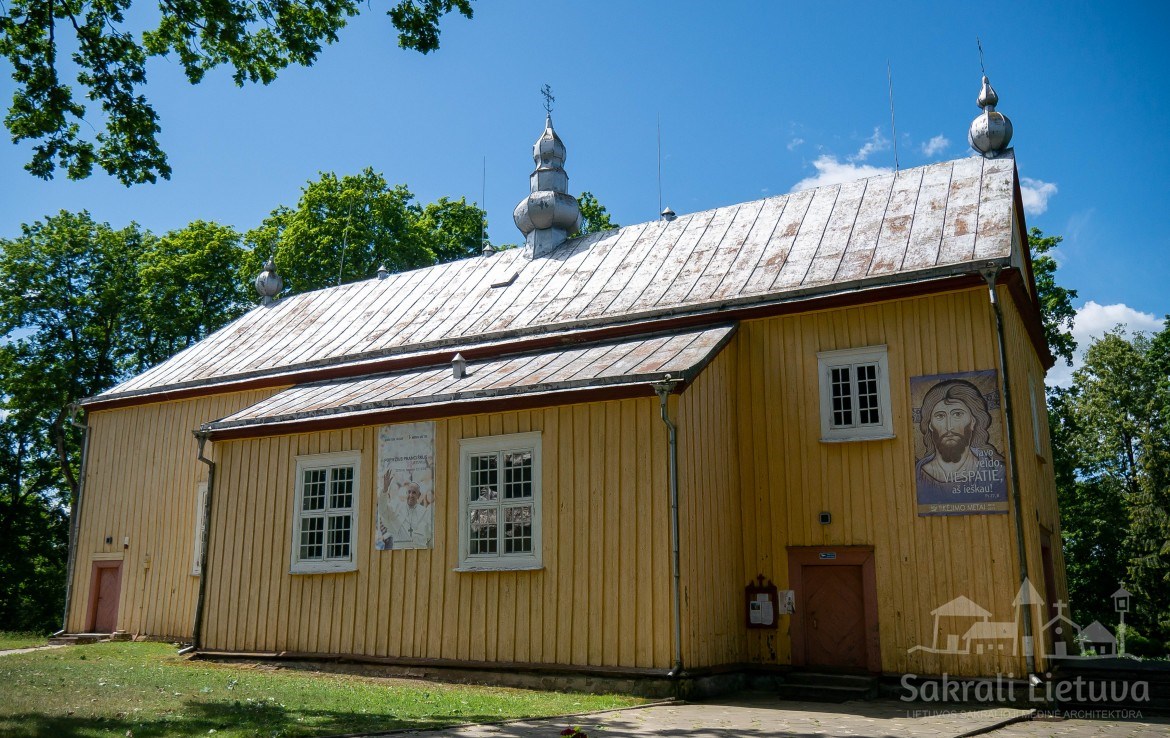 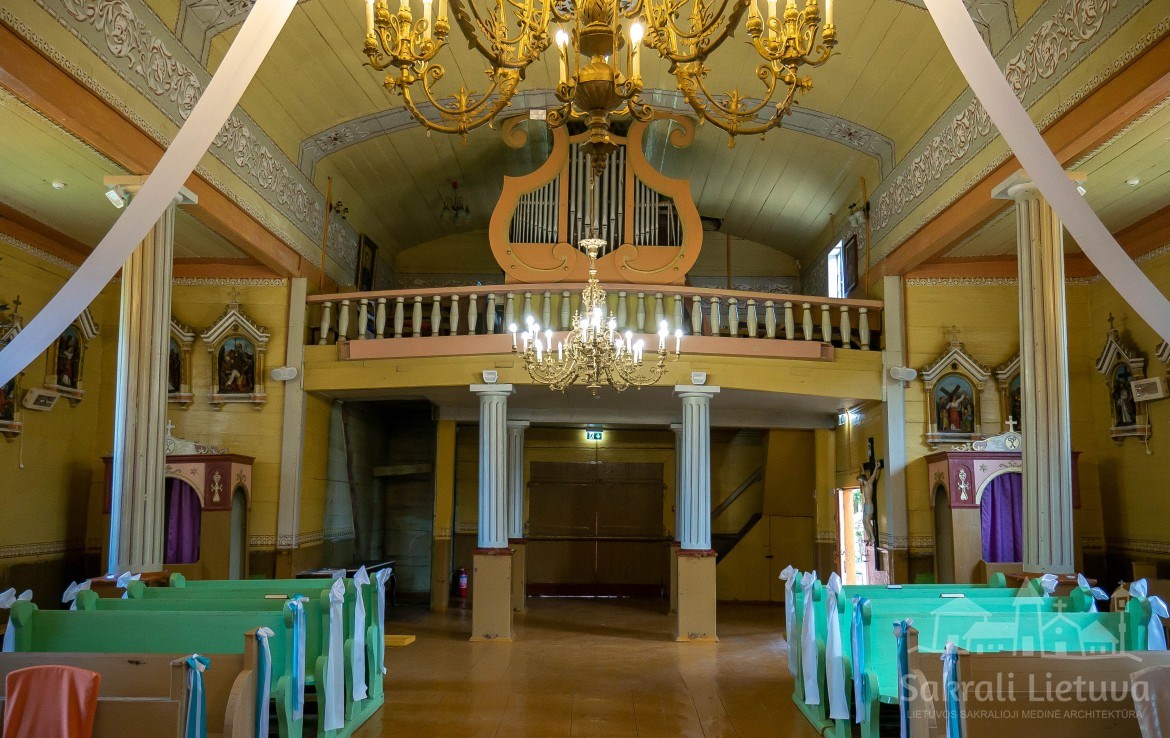 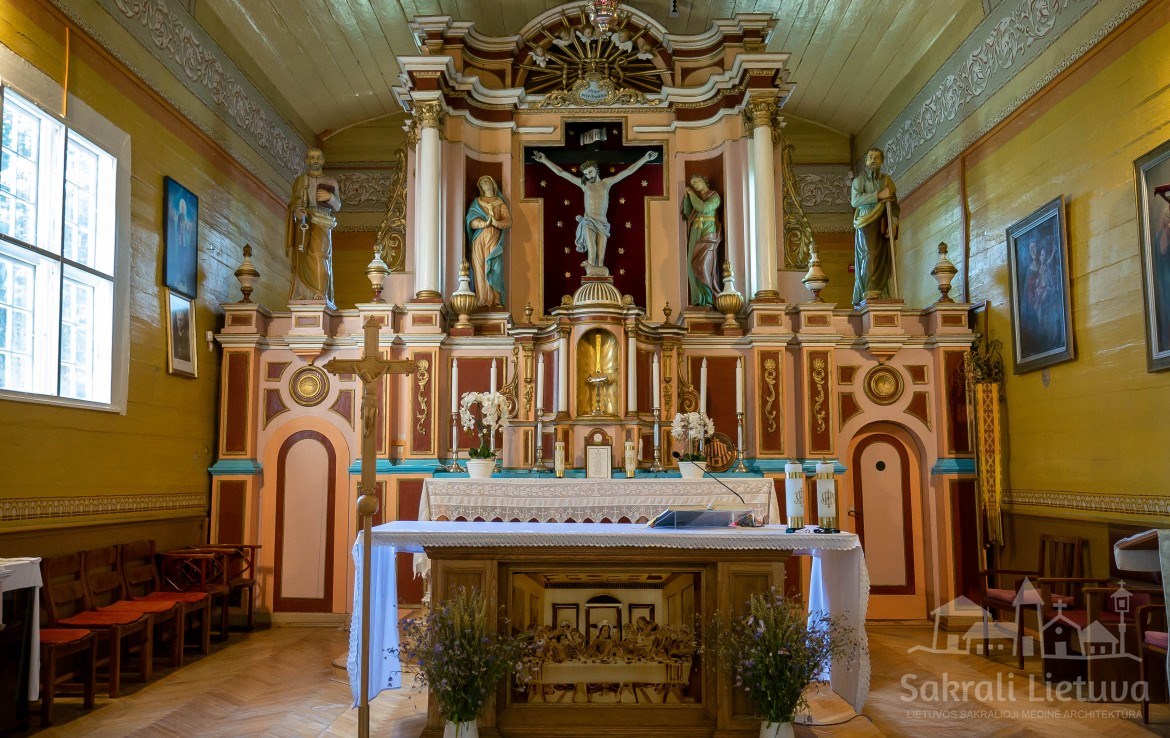 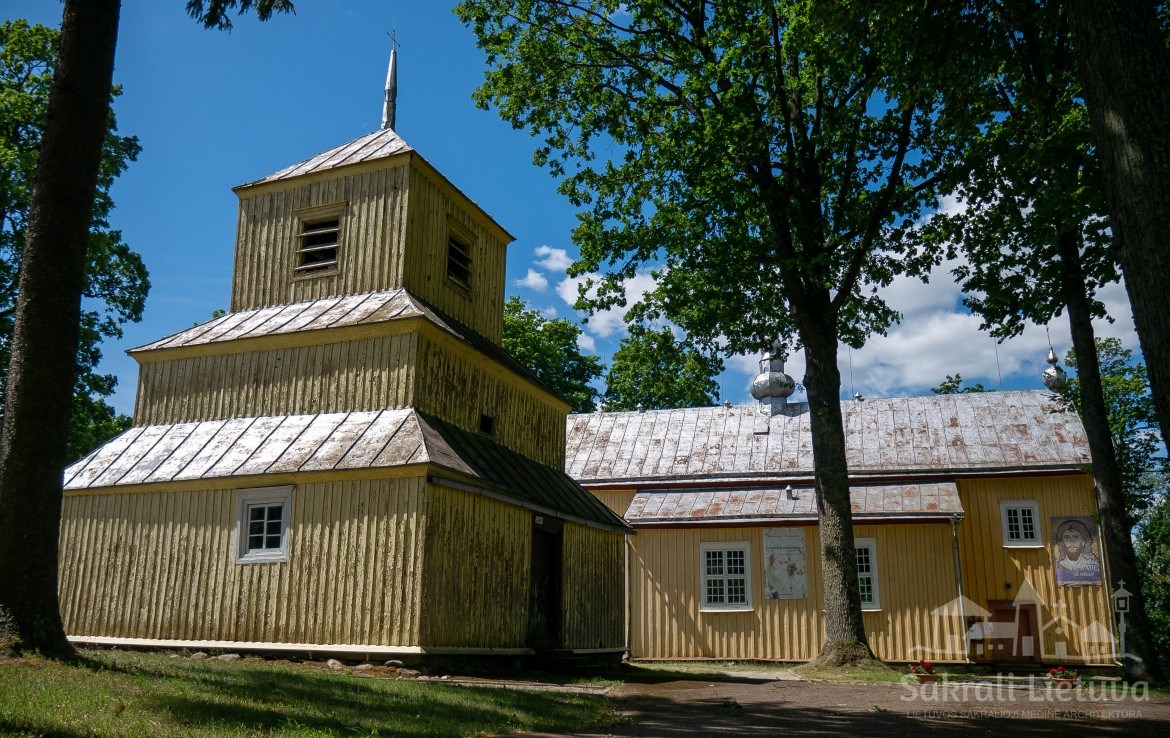 Church and Belfry of the Discovery of the Holy Cross of the Ilguva Manor - Ilguva 71201, Lietuva