The church and belfry of St. Matthew, the Apostle and Evangelist is located next to Gintališkė manor and forms a common complex of valuable historical buildings protected by the state. In the old days, Gintališkė manor together with the village belonged to Count Ledochovskis (Count Ledochowski). In the 16th century, an eldership was formed that included five hundred houses of Gintališkė rural area, which in 1568 was donated by King Žygimantas Augustas (King Sigismund Augustus) to the Samogitian Hetman Jonas Chodkevičius (Jan Chodkiewicz) for his great merits and expenses incurred during the Livonian War. Later Gintališkė parish went to the Šverinas family, and afterwards was passed on to Karolis Mykolas Druckis-Sokolinskis, the founder of Plateliai Clergy House as a dowry. It was him who built the first church in Gintališkė in 1713. Afterwards Gintališkė went to the Nagurskis family, followed by the Pacas family. In 1778, Mykolas Pacas (Michał Pac), Grand Duke of the Grand Duchy of Lithuania and Vilnius Voivode built a new (existing) church there1. In 1779, land was donated to it, and in 1781 a parish was established there. At the beginning of the 19th century a parish school operated there. In 1845, the church was rebuilt, and next year the altars were painted and gilded. In 1896, some of the wall logs were replaced, and the building was enlarged.

The church has a typical folk church appearance, is of a rectangular layout, has a nave and a triangular apse. The original shingle roof is covered with slate tiles and includes a turret with sheet steel roofing in the center of the roof. The roof also has two sleek-shaped peaks covered with sheet steel and flowing into decorated crosses on both ends of the roof. One sacristy is attached to the side of the presbytery. The main facade is flat, of neo-Classical proportions. Neo-gothic, pointed arch-shaped windows and two niches with wooden sculptures of saints are located above the rectangular door. The wooden two-leaf door of the main facade and the one-leaf door of the sacristy are have metal fittings and are boarded in herringbone-diamond pattern.

The church space is uninterrupted, with a flat plank ceiling adorned with three ceiling rosettes painted in the 2nd quarter of the 20th century. The organ stands out against the interior, as it is surrounded by a wide neo-Classical cornice and a small balustrade and supported by stylized folk-shaped columns. Boxes are installed underneath it. The church presbytery has three altars installed in 1845: the great one (St. Joseph), the one of Our Lady and the one of St. Matthew the Apostle. The main altar is decorated with the picture of St. Joseph painted in approximately 1845 by a professional painter as a follow-up of the work of Simon Čechavičius. The archives have a record that all the three altars were installed thanks to the initiative and funds of the parishioners. The interior has valuable carpentry pieces of that time that have survived to date: the baptistery, the pulpits, the confessional, the pews, and the organ of the early 20th century made by Martynas Masalskis in Panevėžys. In 2001, Gintališkė Church was robbed: various religious items and several wooden statues of the 18th century were stolen.

In 1850, a wooden belfry was built near the church. Its architectural solutions are typical of this region: the belfry is massive, has two sections and an attic, and a protruding porch. The trapezoidal first section tapering upwards is as wide as the church building at the base. The three-sided roof is covered with sheet steel, topped by sleek-shaped, sheet steel covered pedestal with a decorated cross. 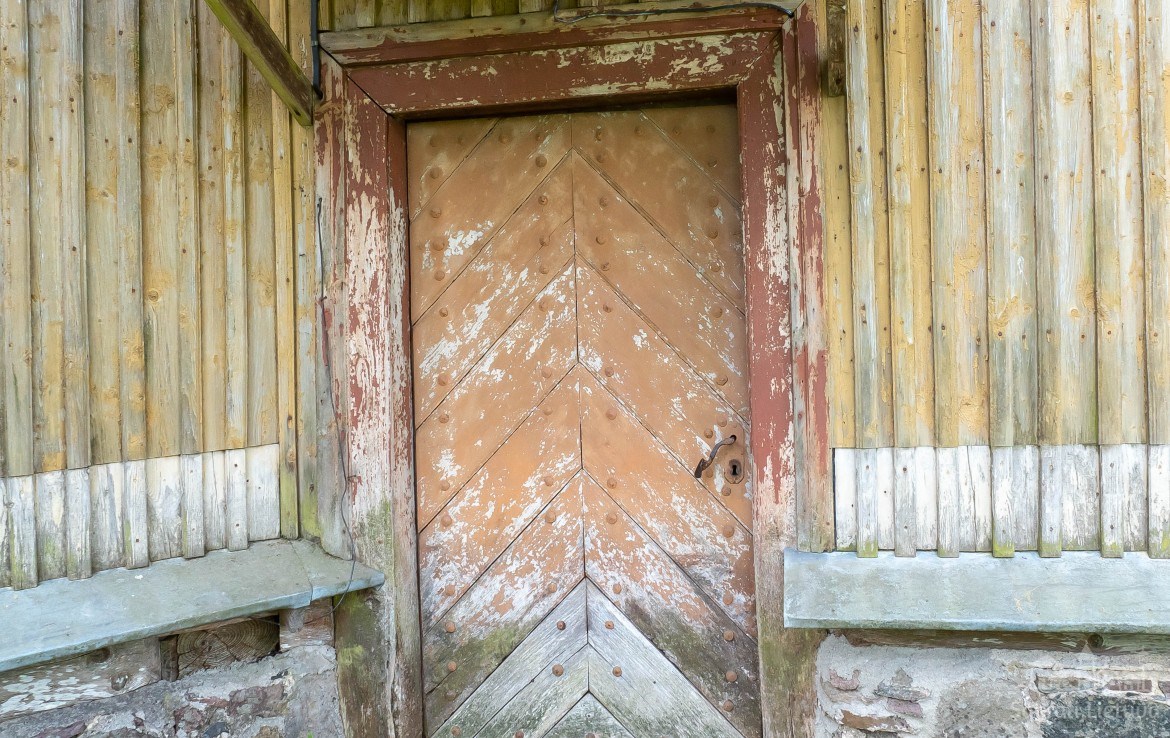 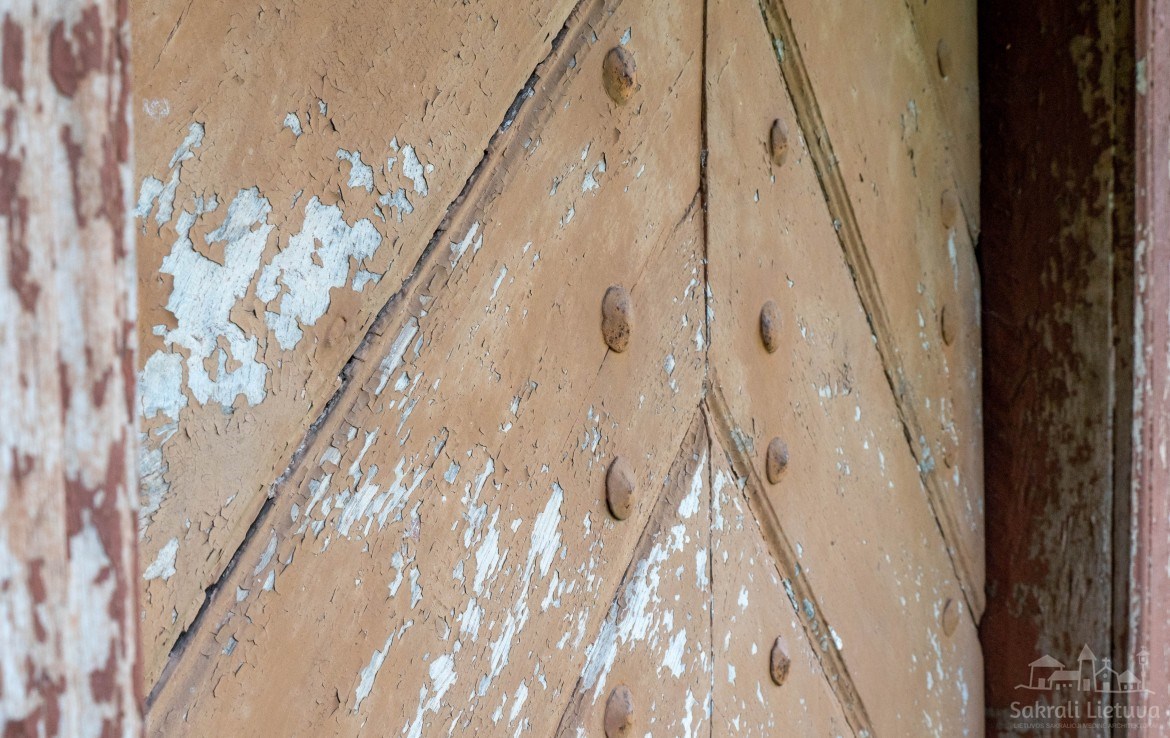 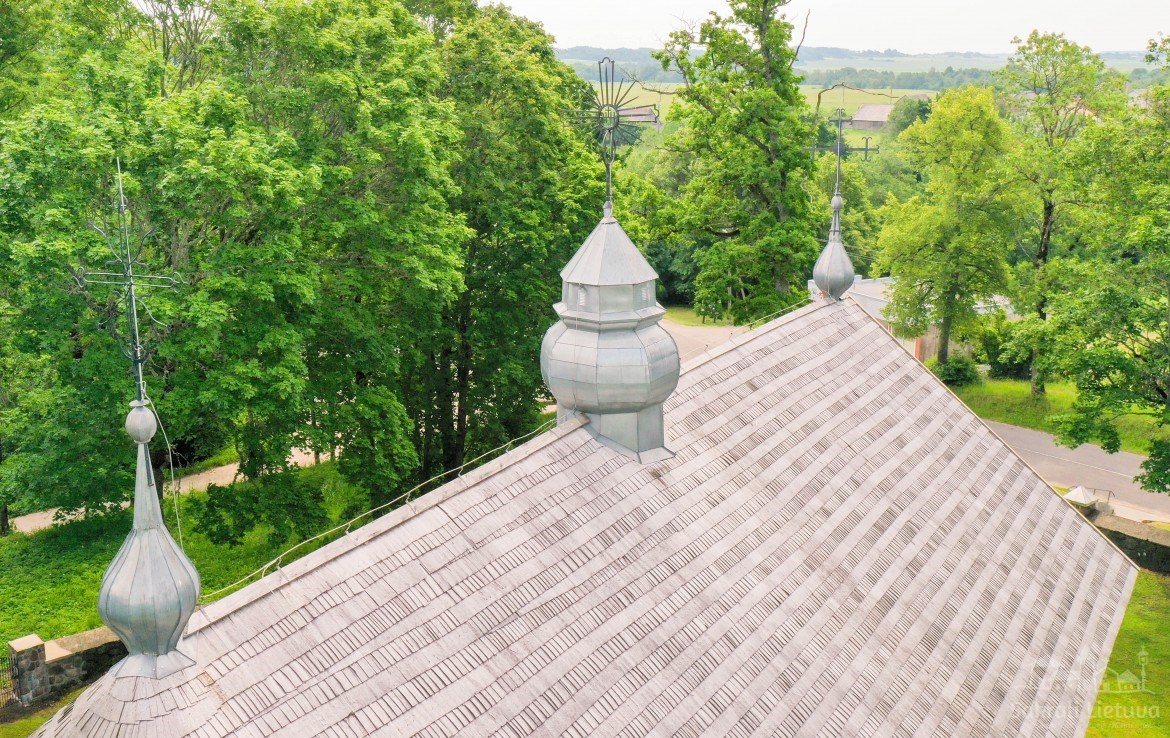 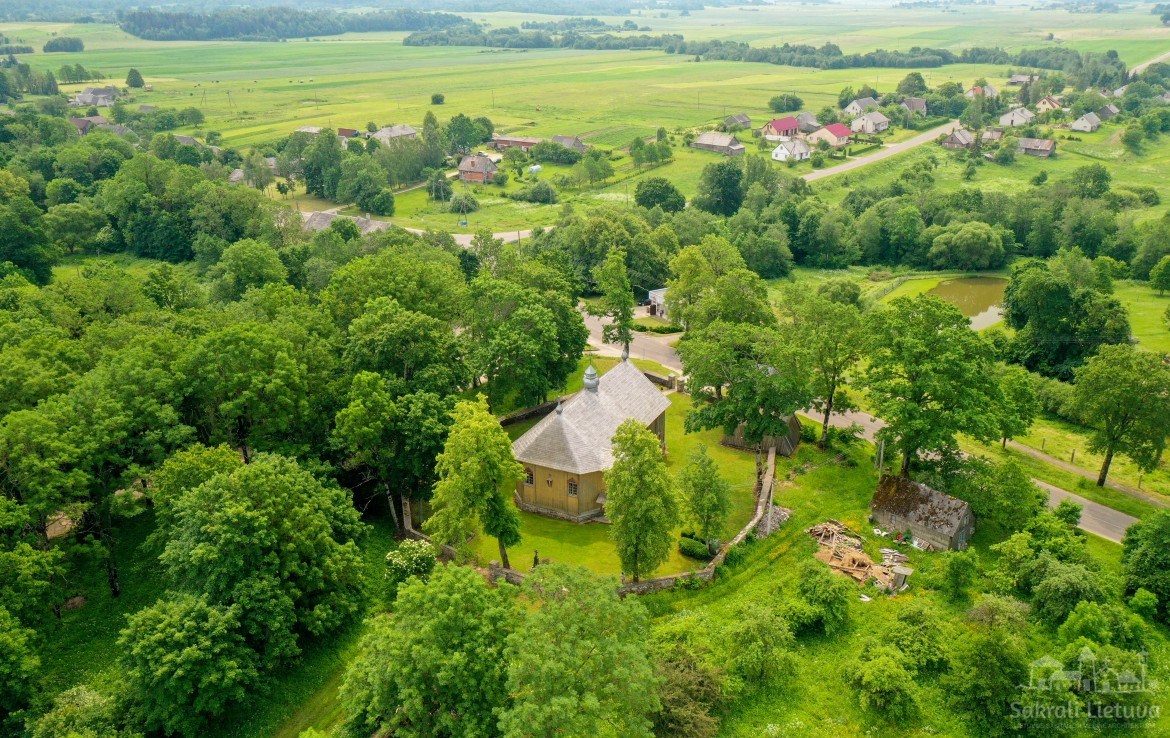 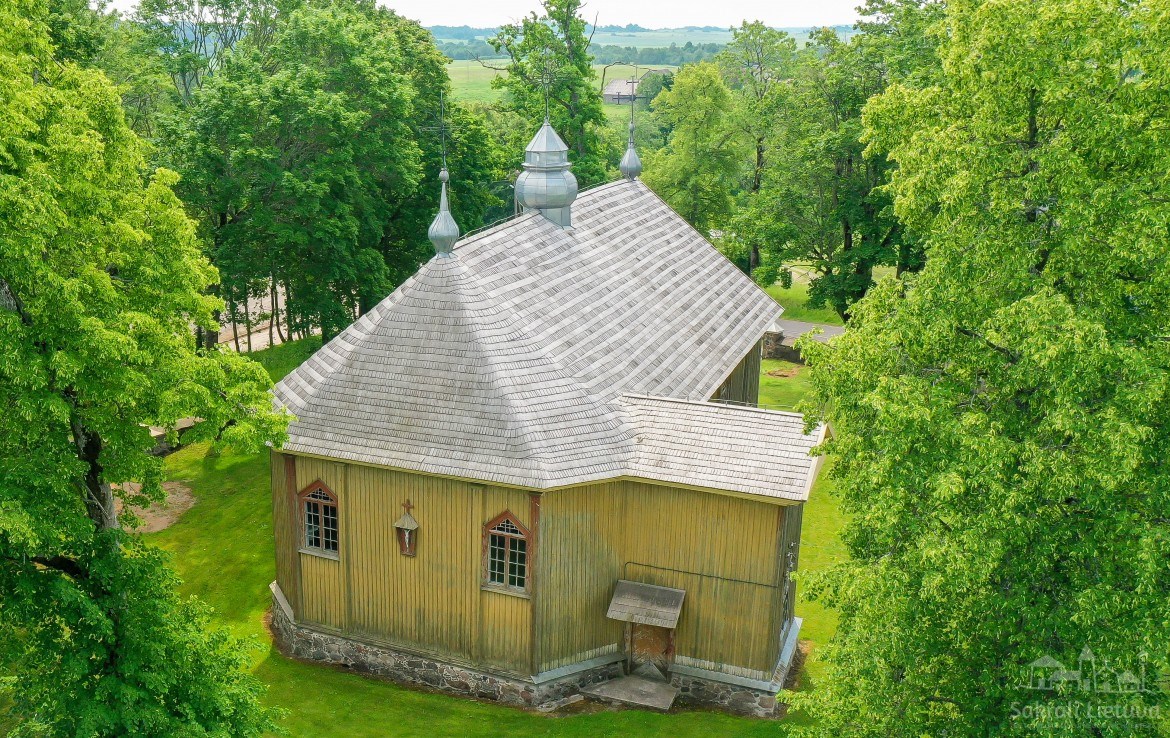 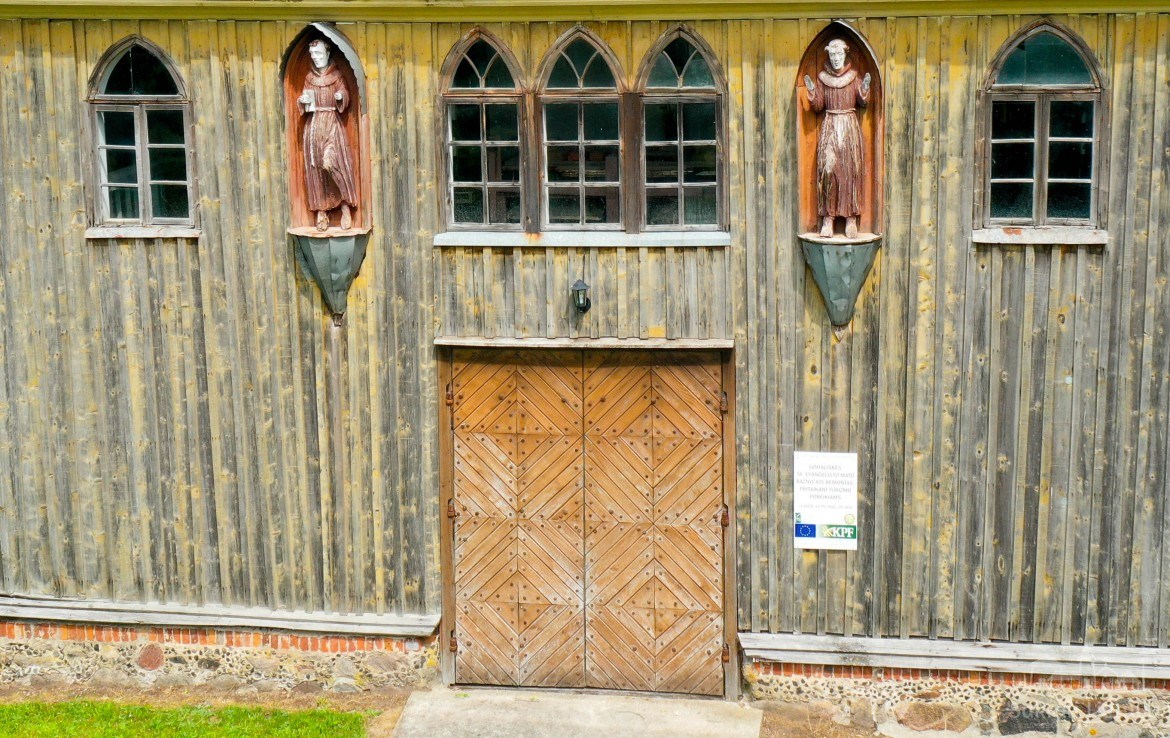 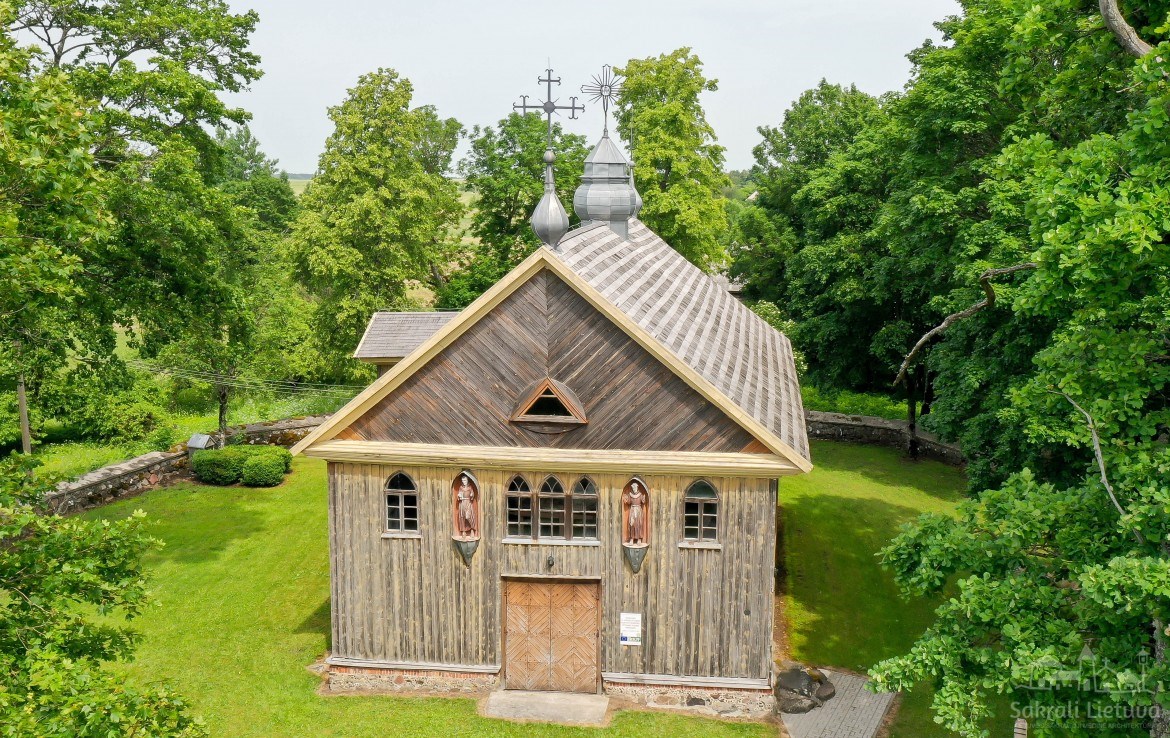 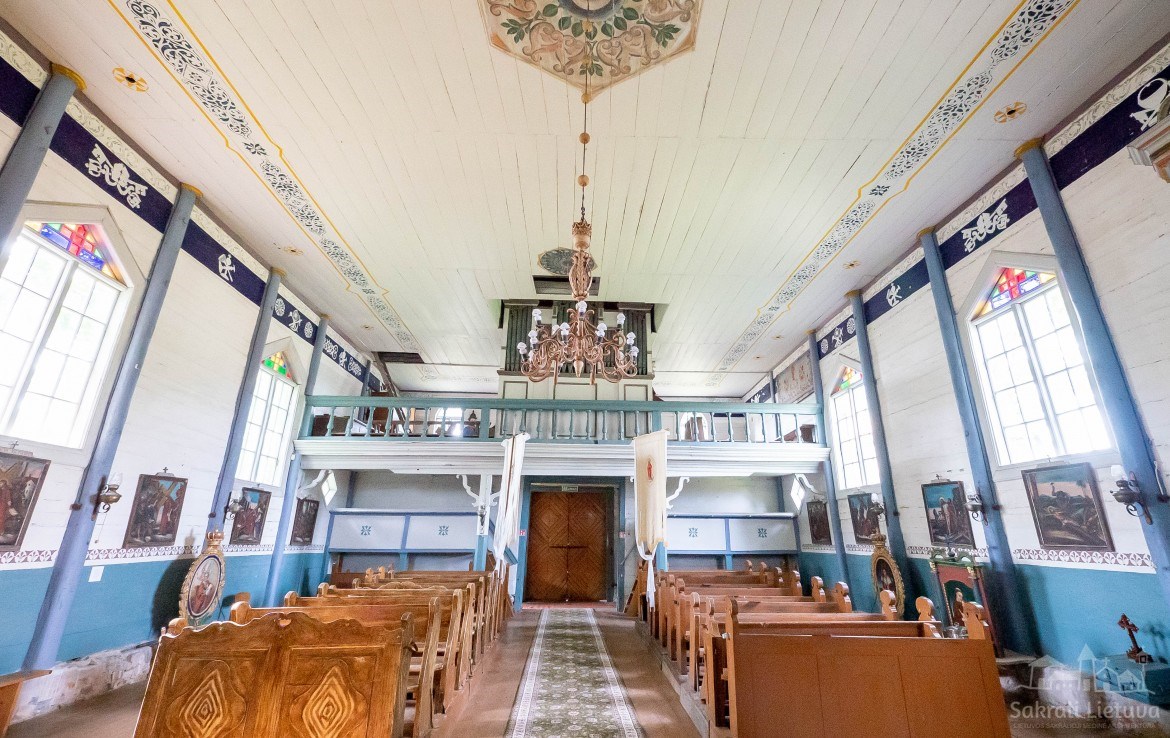 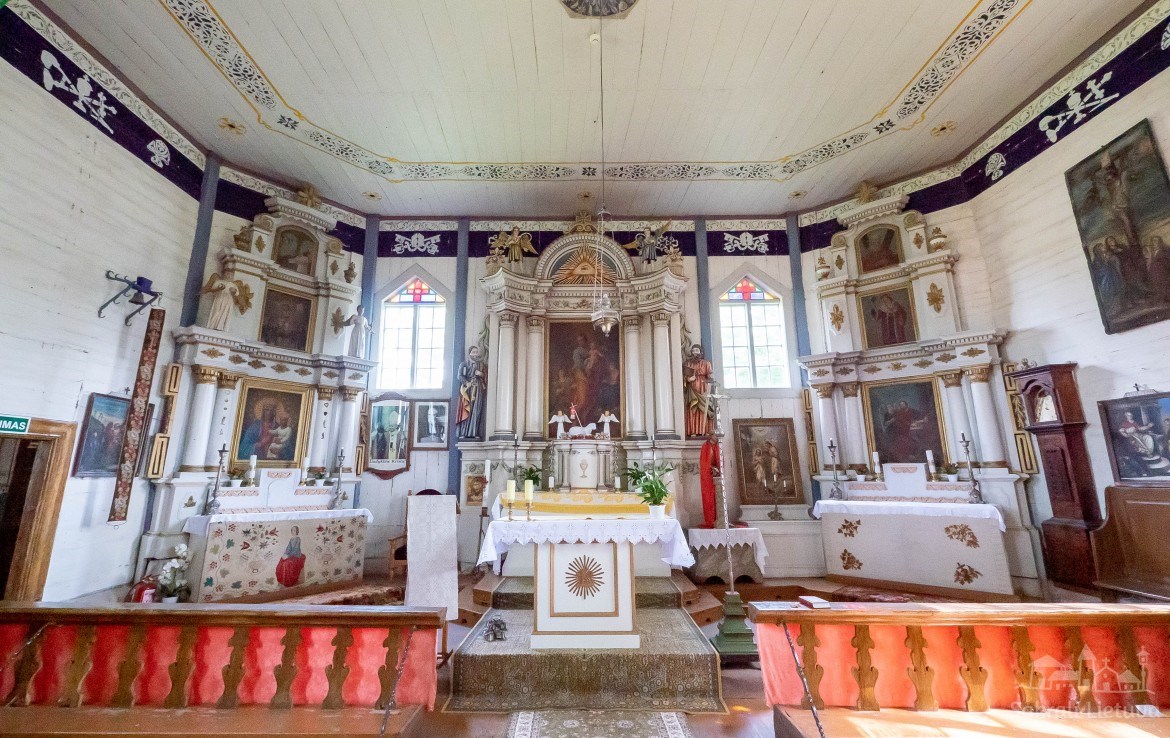 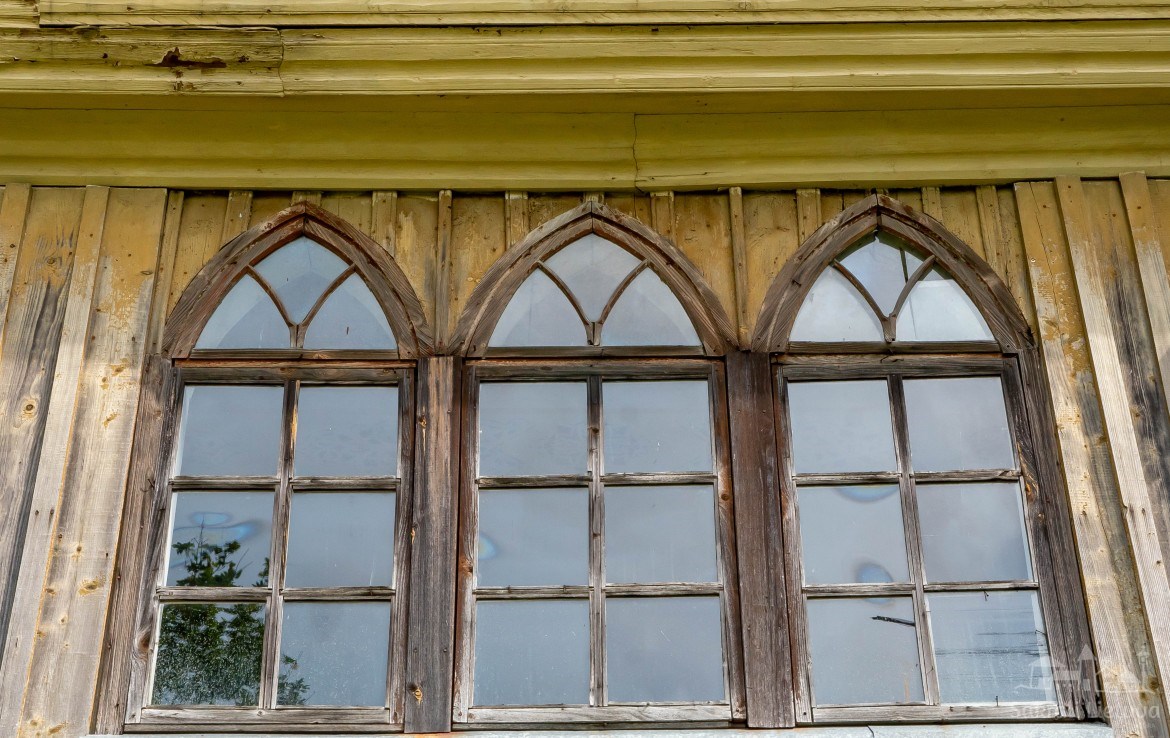 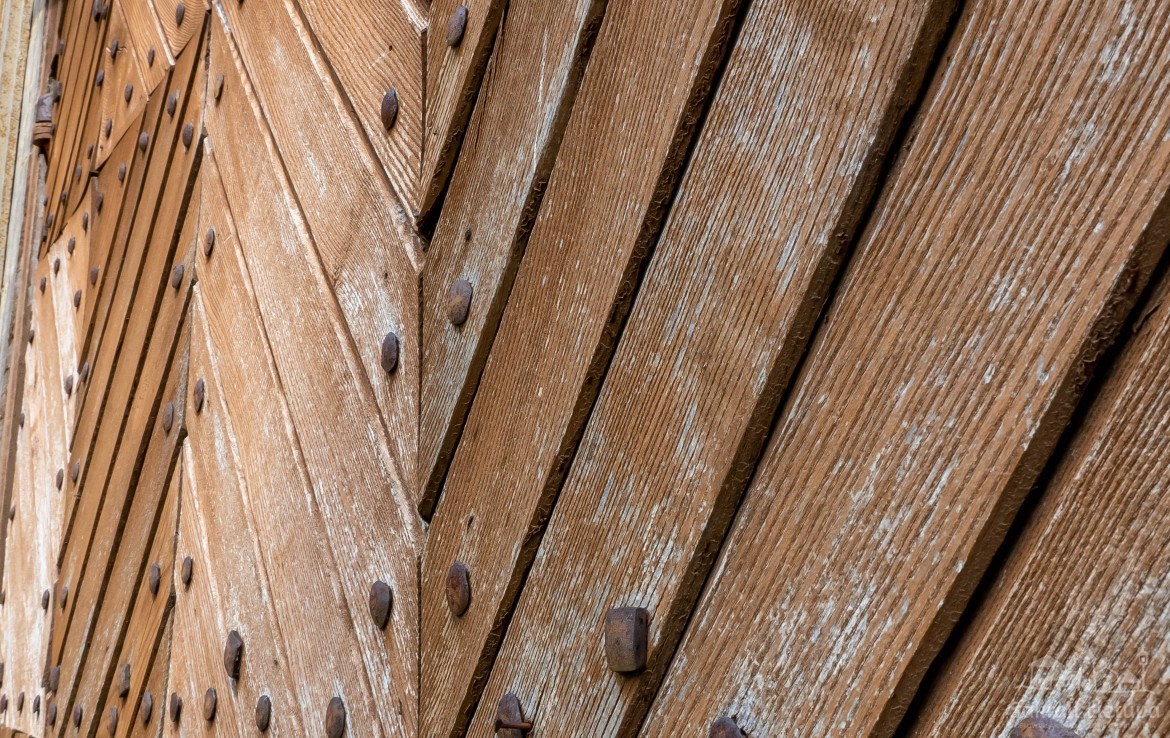 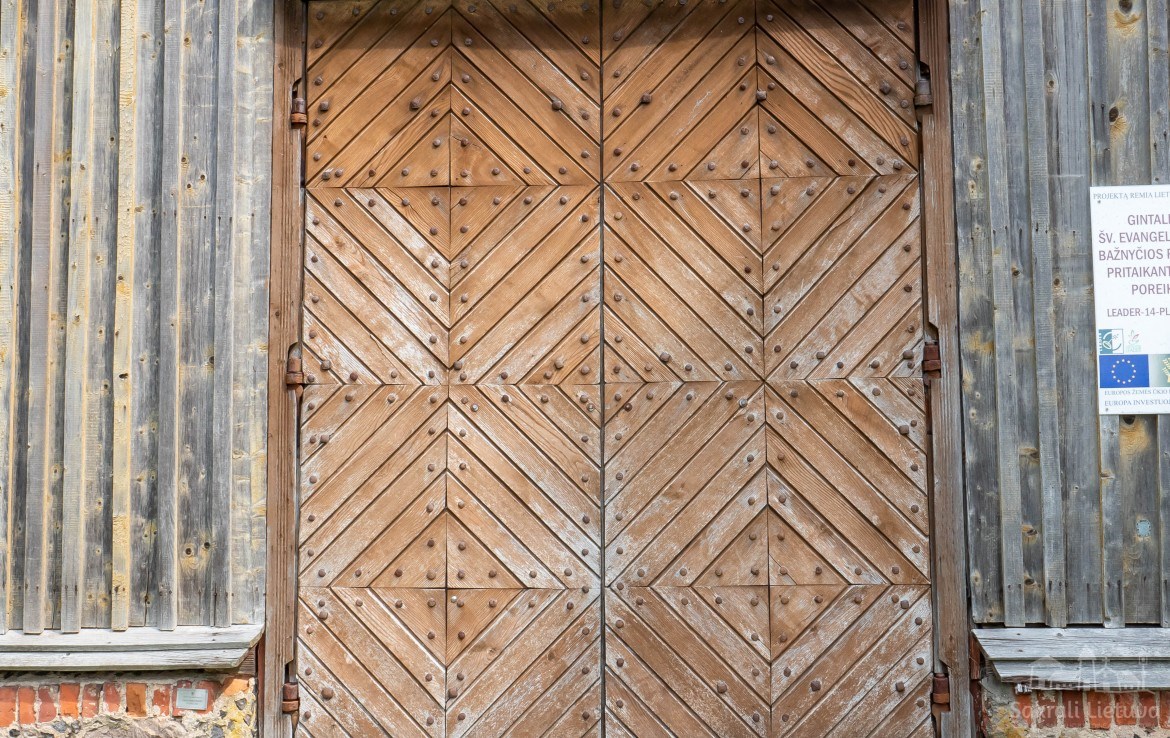 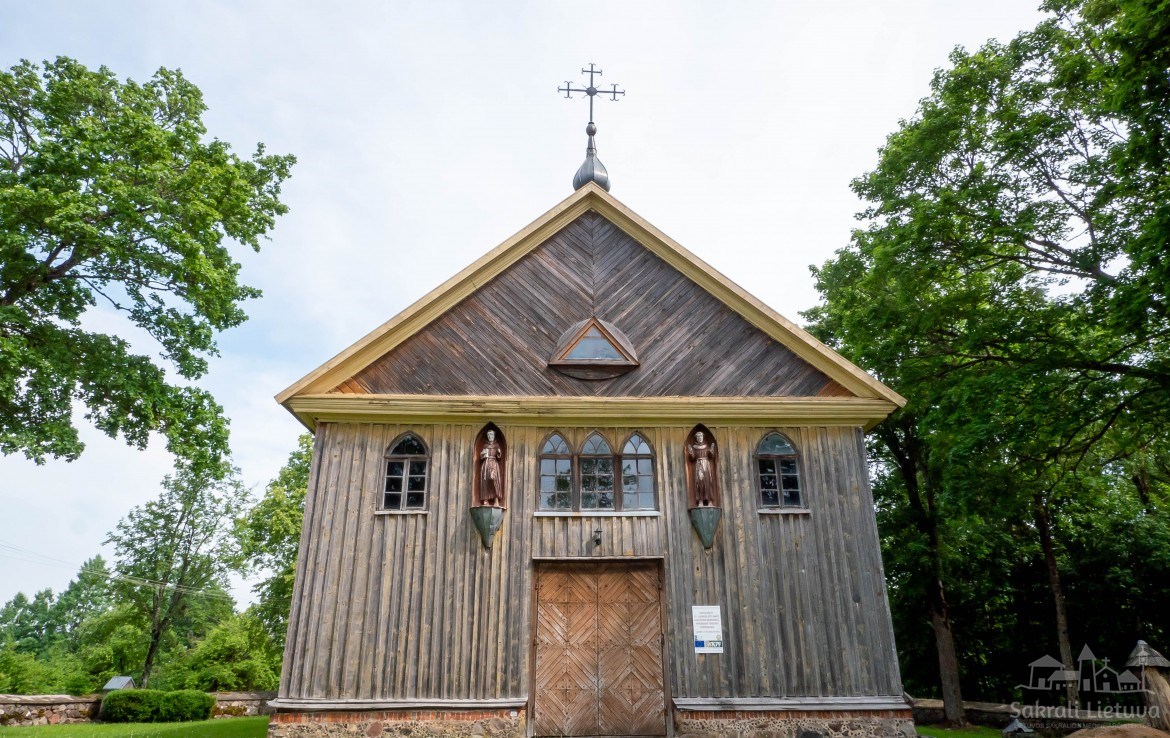 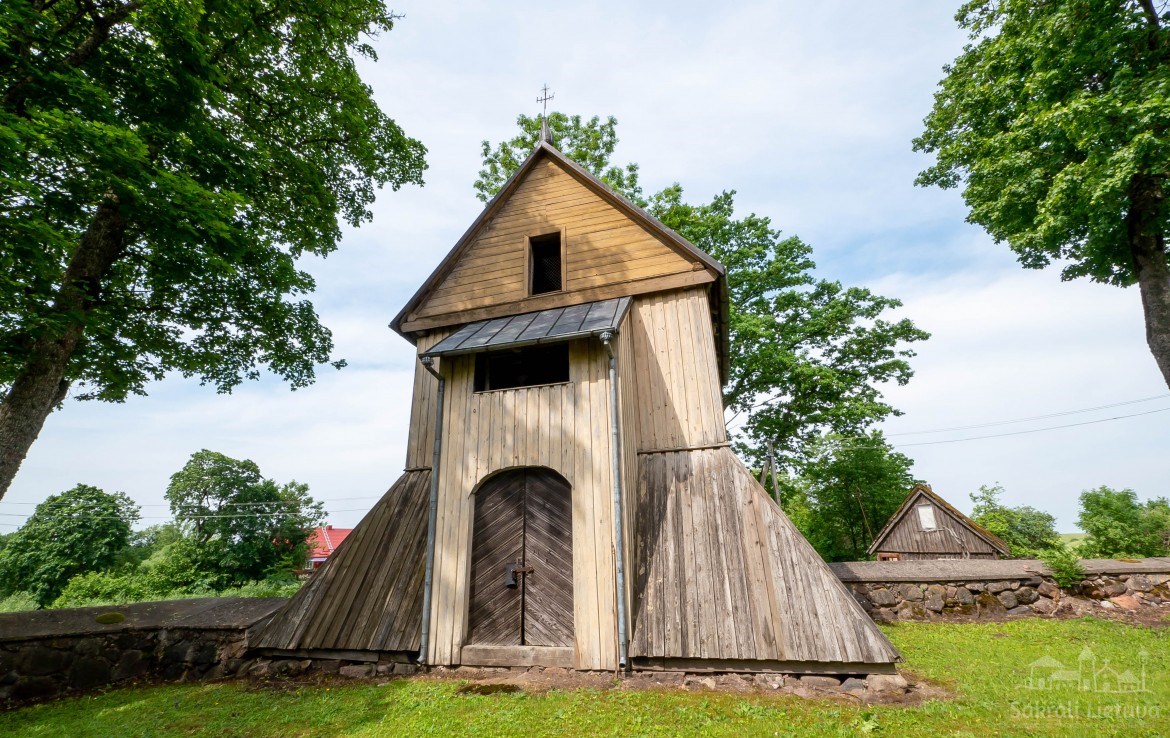 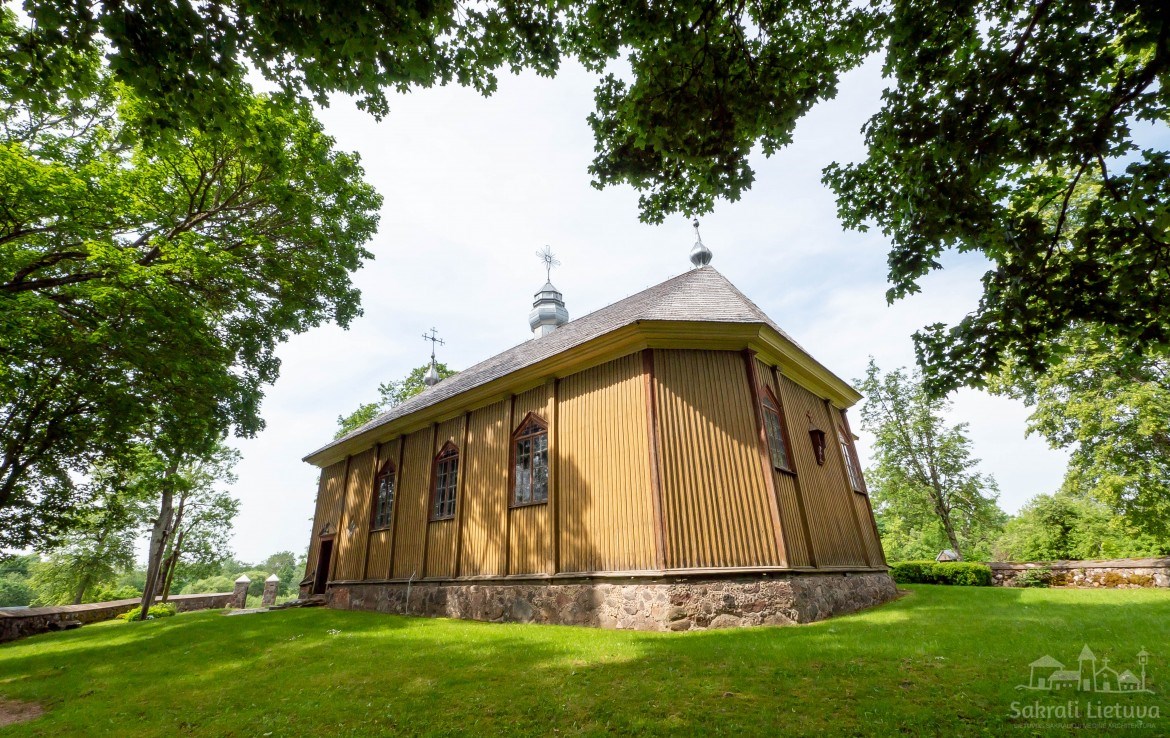 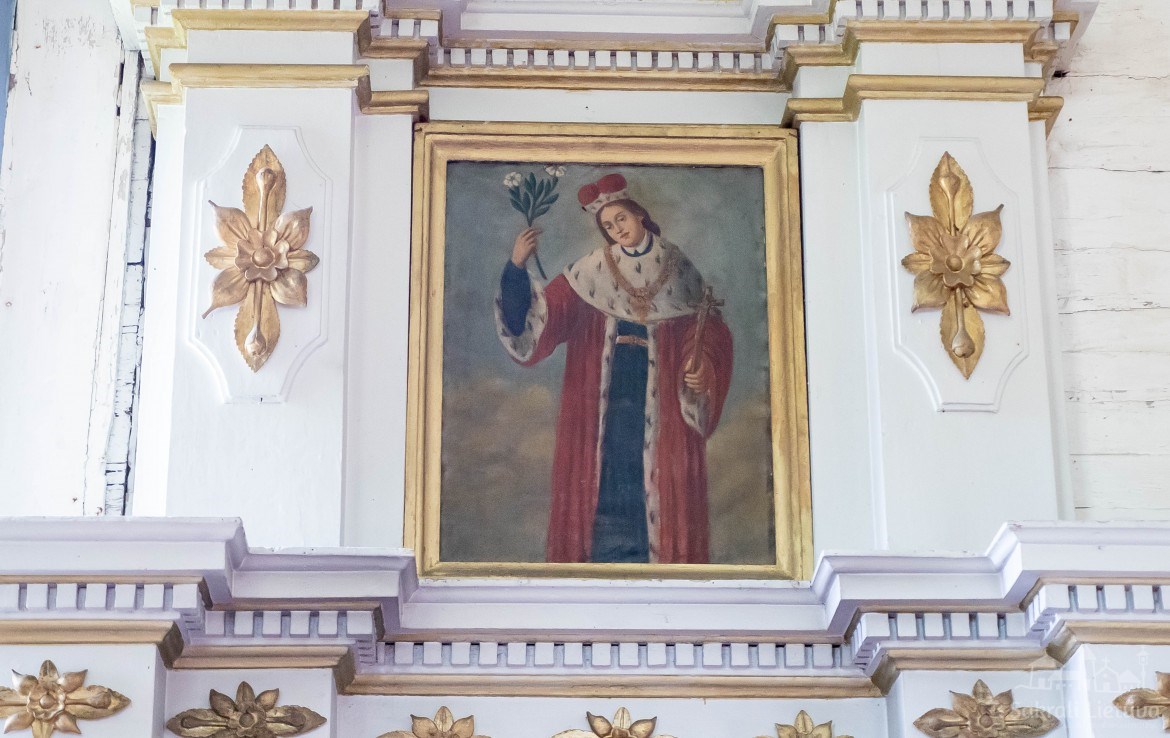 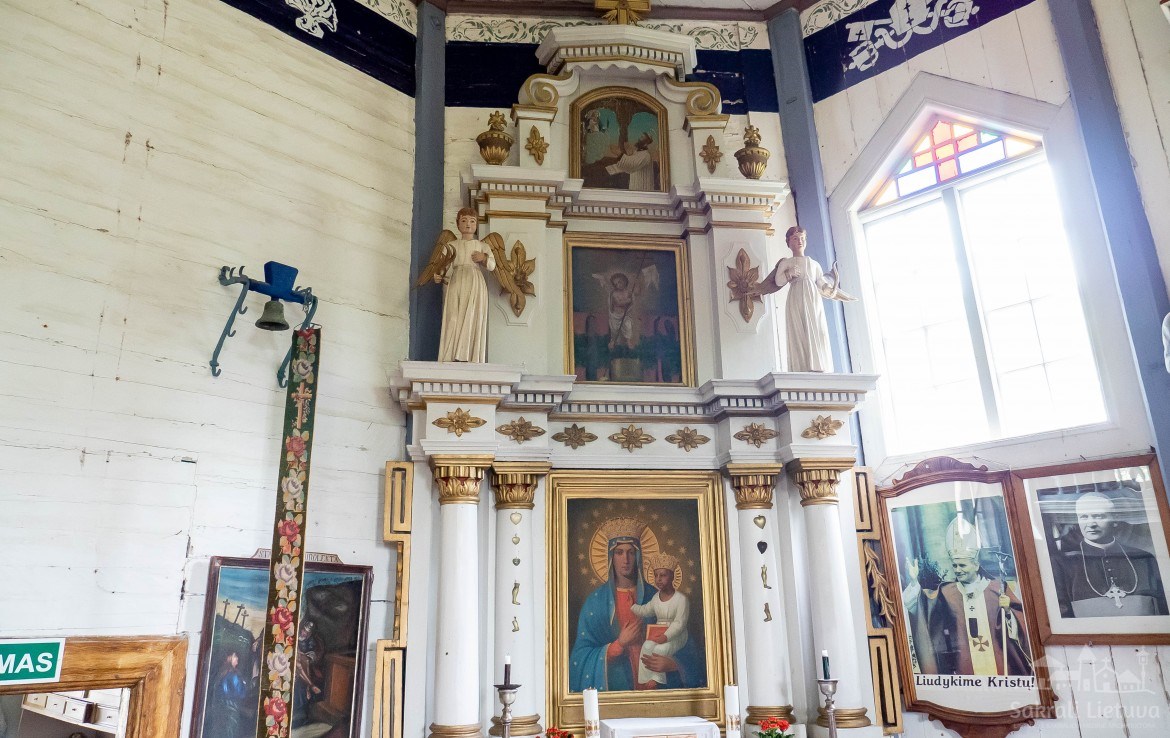 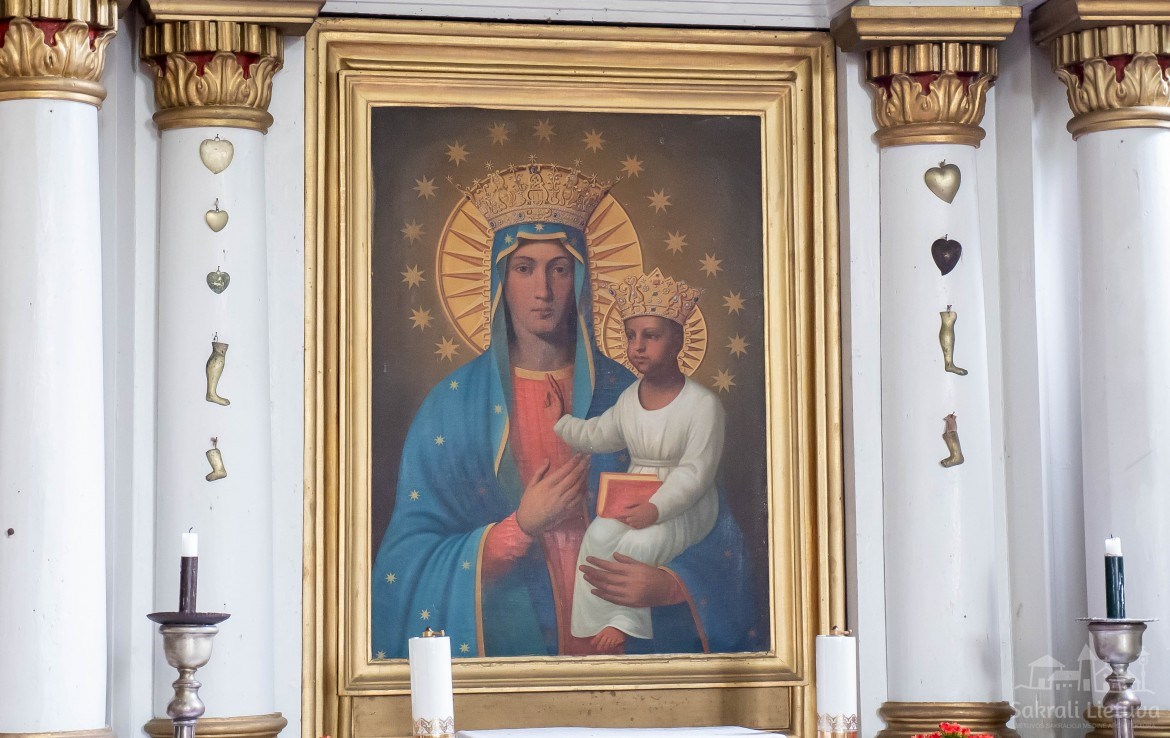 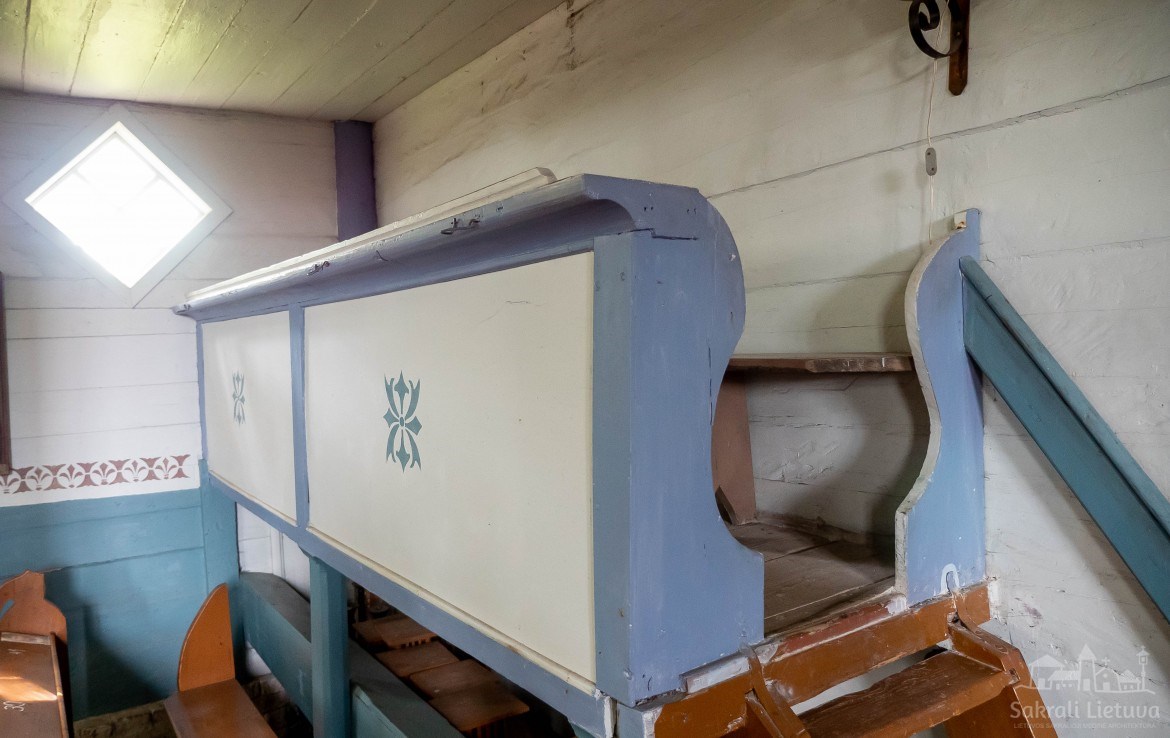 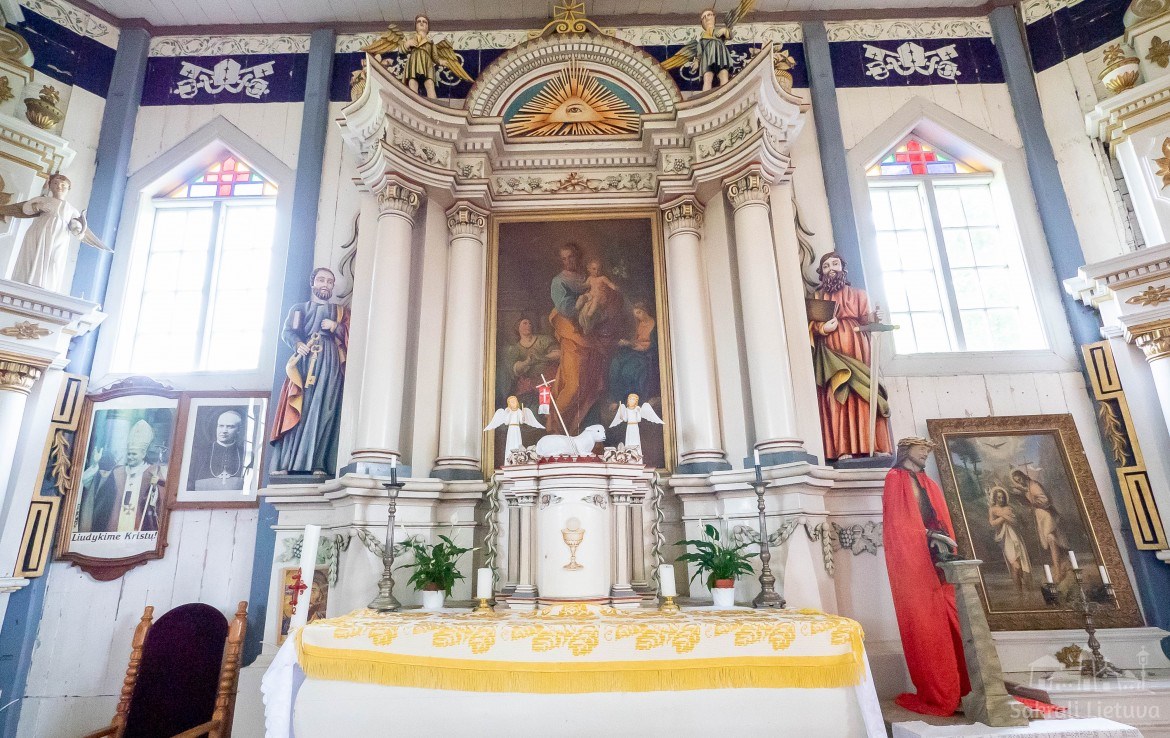 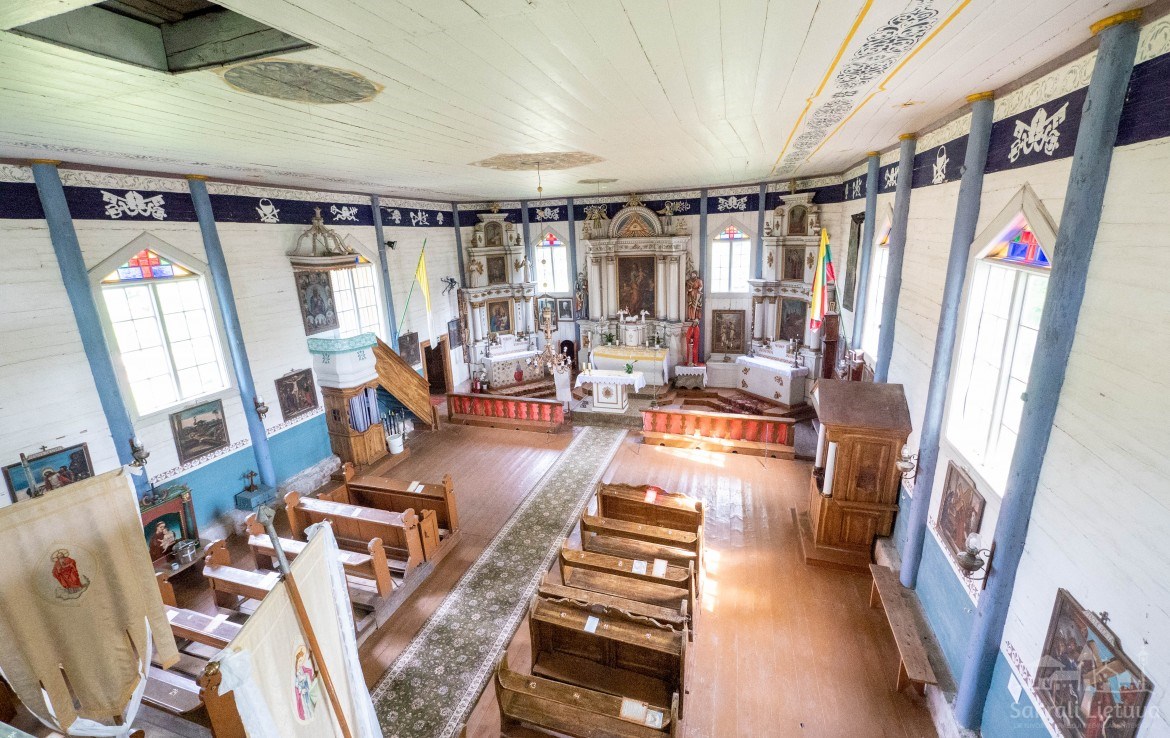 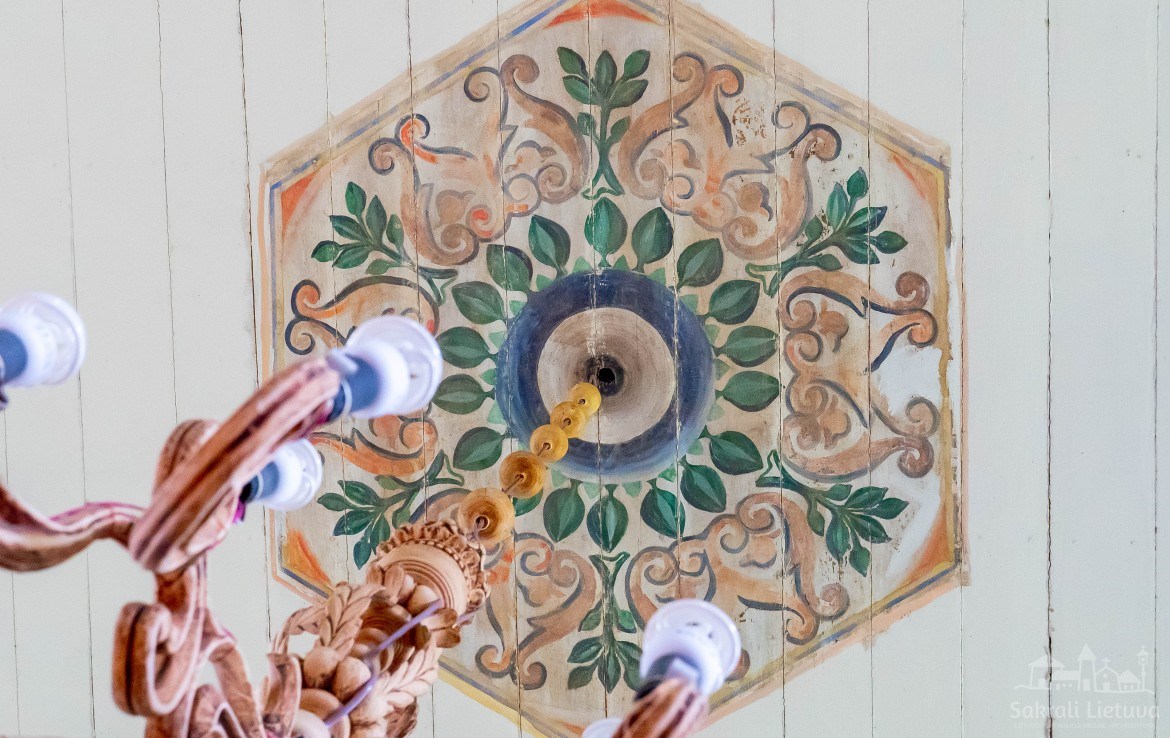