The Žemaitians (Samogitians) believe that the environs of Beržoras have miracle-working powers. This is testified to by the story of the origin of the wooden Church of Beržoras and its predecessor the chapel. According to the old legend told by the local population, a shepherd saw a picture of the Virgin Mary on the top of a birch-tree. He informed the priest of the Church of Plateliai thereof who brought the picture to Plateliai Church, however, the picture disappeared somewhere, and the people saw the Virgin Mary on the birch-tree. Then the Žemaitians chopped down the birch-tree and built a wooden chapel of Saint John of Nepomuk of hewed logs in its place where the miracle-working picture had benn hung. The exact date of the erection of the chapel is unknown; however, judging from the construction style it was not later than in the 18th century. This guess is as if confirmed by the dates discerned in the metal parts of the chapel –1727 and 1728.

Soon the present Church of Beržoras was built next to the chapel. In 1746, the dean of Plateliai Juozapas Vaitkevičius built it from his own funds and the funds of the parish. A year later the sanctuary was granted the rights of the filial of Plateliai Church and was consecrated the Church of St. Stanislaus.

Beržoras Church is exceptional in its architectural and artistic value: this is a masterpiece created by folk masters. The interior was created following magnificent European rococo style, and the logs of the Church were joined without a saw, processing spruce logs with the help of an axe only. The church has a cruciform form with a three-sided apse and a turret in the centre. A high roof prevails; originally it was covered with shingle, and only later, during the Soviet period, the covering was replaced with sheets of slate. The entire upper construction, i.e., that of the ceiling and the roof is supported only by the walls. The longwise nave-the hall is longer than the transept. The transepts contain side altars behind which there are premises of the vestry on both sides and the choirs – the loggias whose open holes face the side of the presbytery. Through the main entrance one gets into the porch separated from the church space. The empora for the organ and the choir are equipped over the porch. The facades are monumental, stocky proportions are characteristic of Samogitian wooden churches; the width of the main façade is considerably larger than its height up to the cornice.

The high altar is of baroque style. Four columns between which there is a painting of the Mother of God adorn the first tier of the altar. Miracle-working powers of the painting are testified to by sixteen votive offerings which were left there by the believers whose prayers for health and other mercies were answered by the Mother of God in the course of years. A little higher there is a massive wooden cross with suffering Christ. In 1861, the organ for eight voices was installed in the Church, later it was remade.

Next to the Church there is a belfry which is also wooden. The belfry of the square base distinguishes itself for the complex volume composition made of two tiers of different size. The lower inclined part is high getting narrower towards the top. There are acoustic openings in the walls of the upper volume. Two bells hang in the belfry one of which was cast in Germany in 1844 and the other has no distinctive inscriptions.

The chapel dating back to the 18th century is also attributed to the complex. It is of a rectangular plan with corner cutting – narrowing at the end of the altar. It is a hall building consisting of one premise. The whole construction is supported exclusively by the walls. The roof is high, covered with shingle, with openwork metal crosses at both ends.

The sanctuary is surrounded by one of the most interesting old churchyards in Samogitia, which has been famous for its wooden crosses and small shrines since olden times. 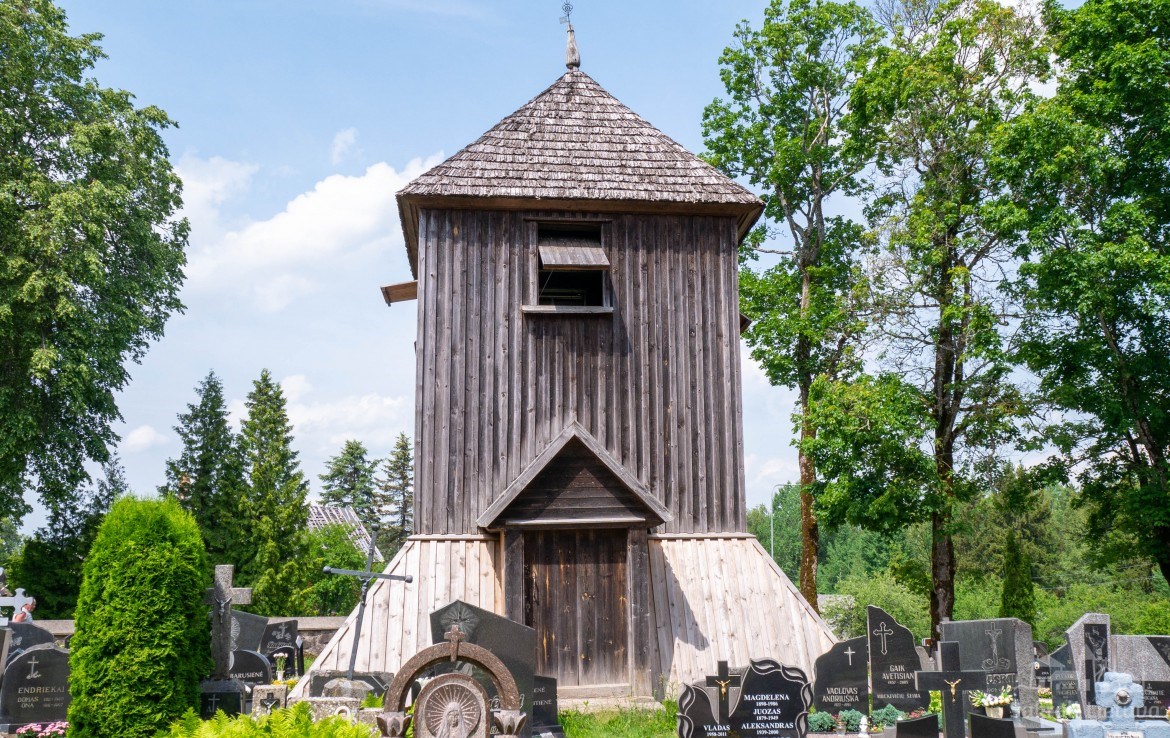 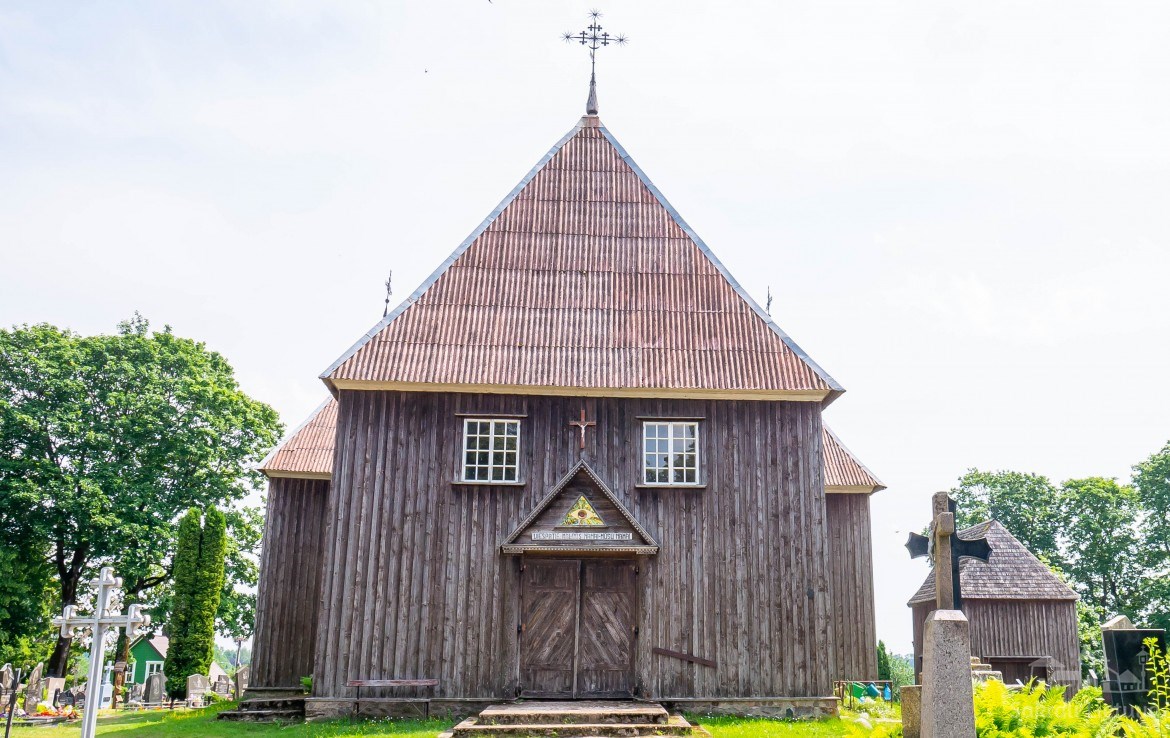 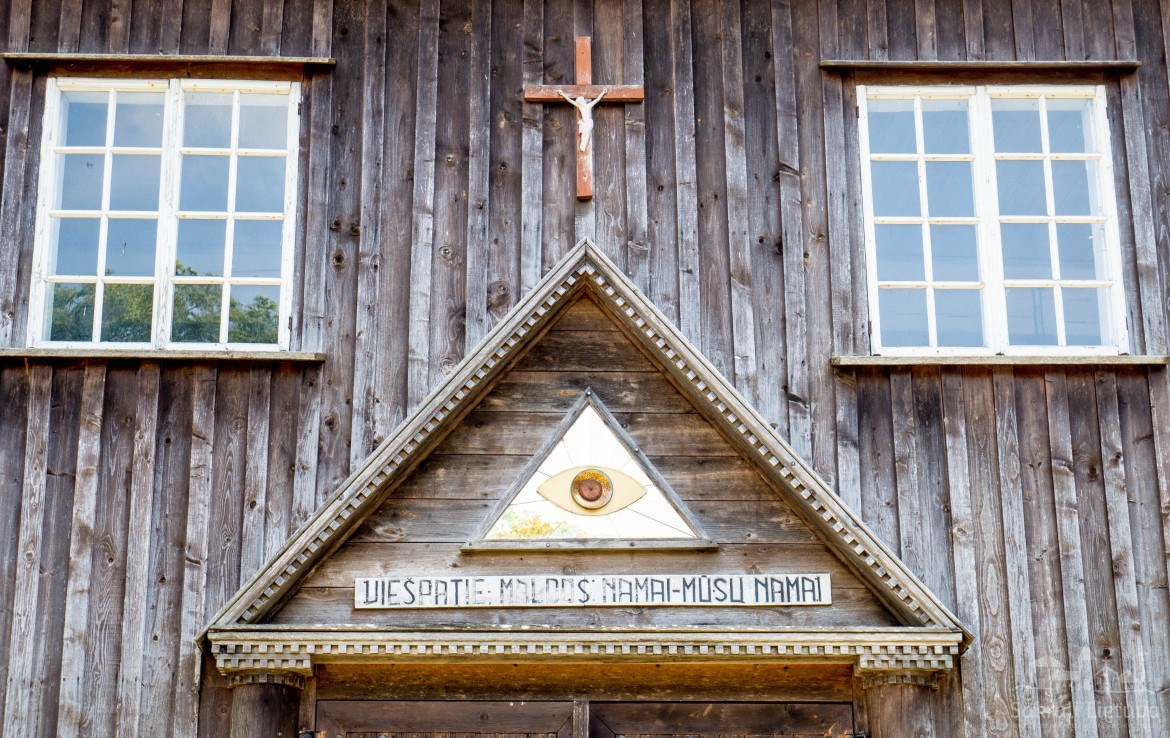 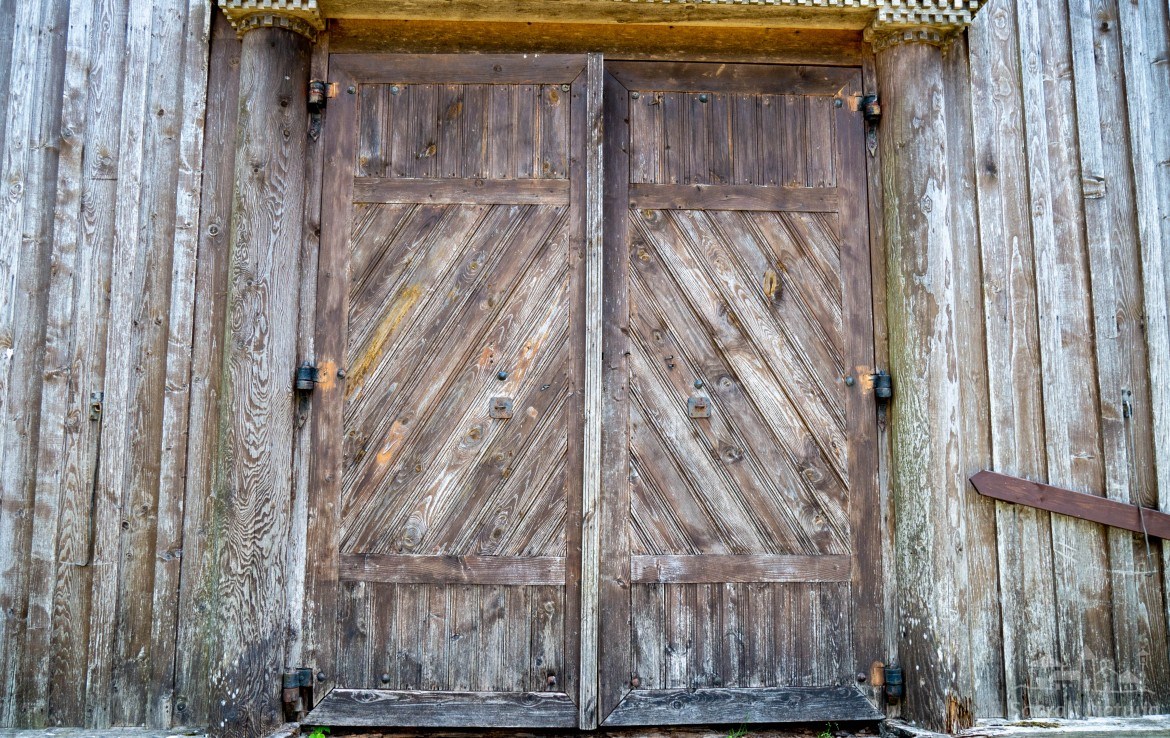 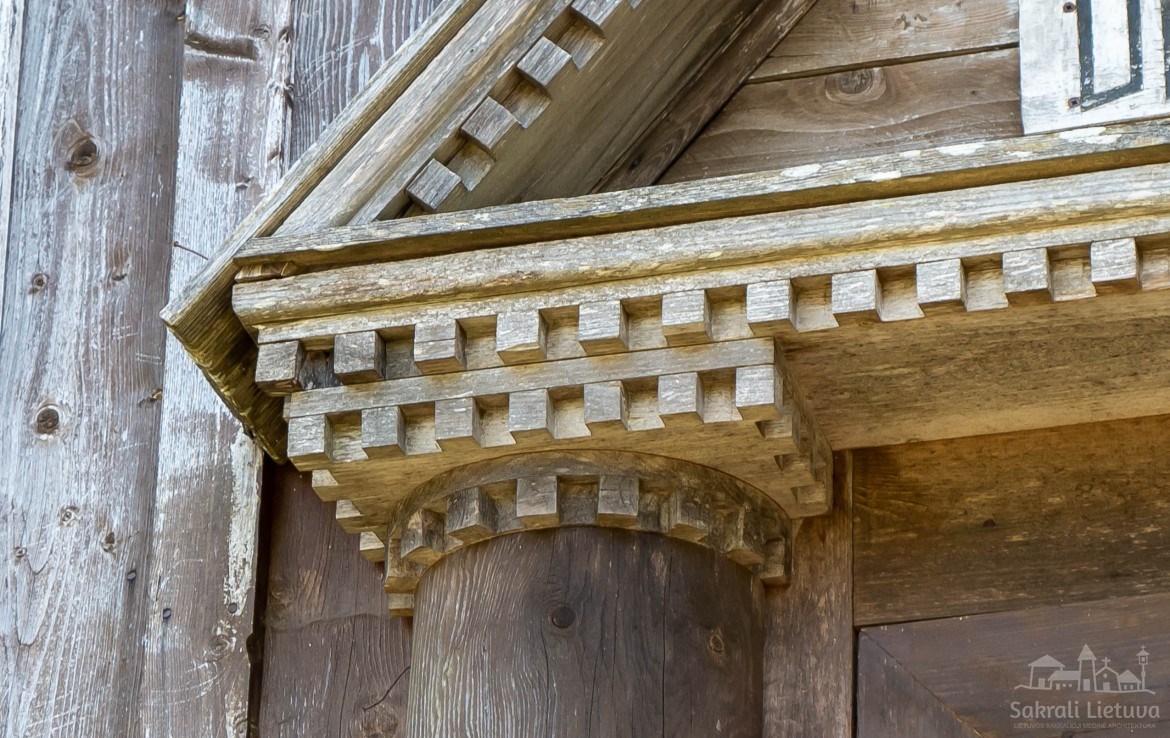 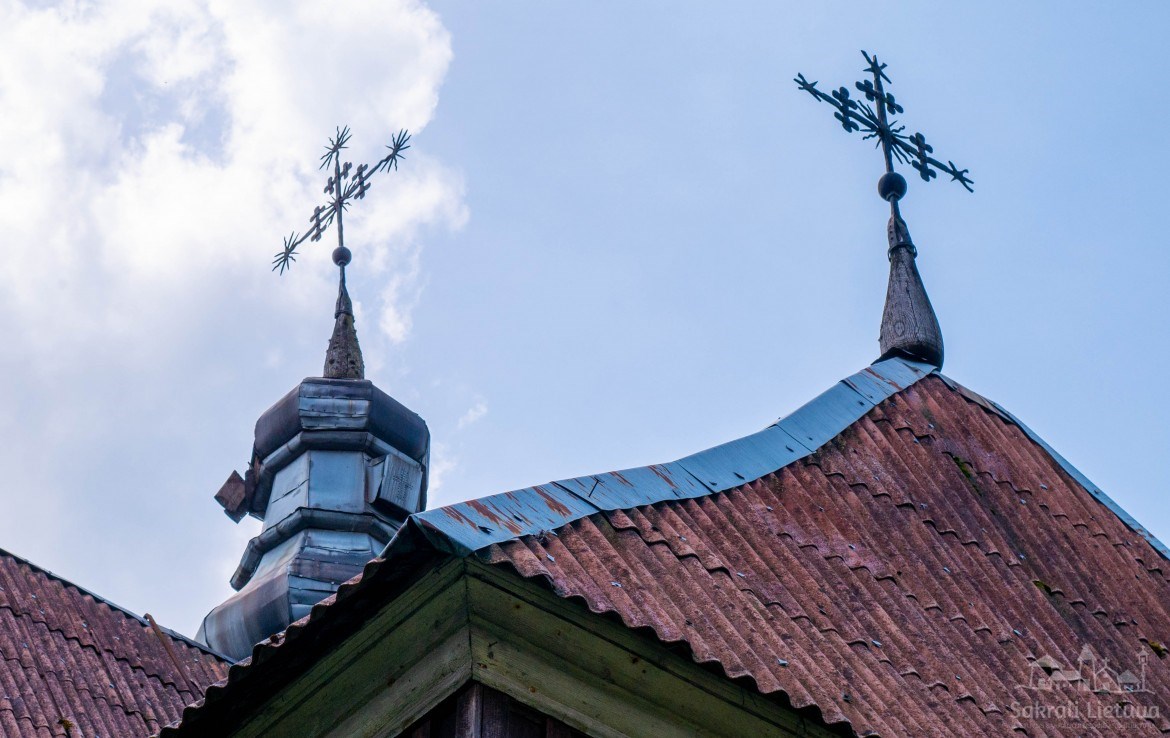 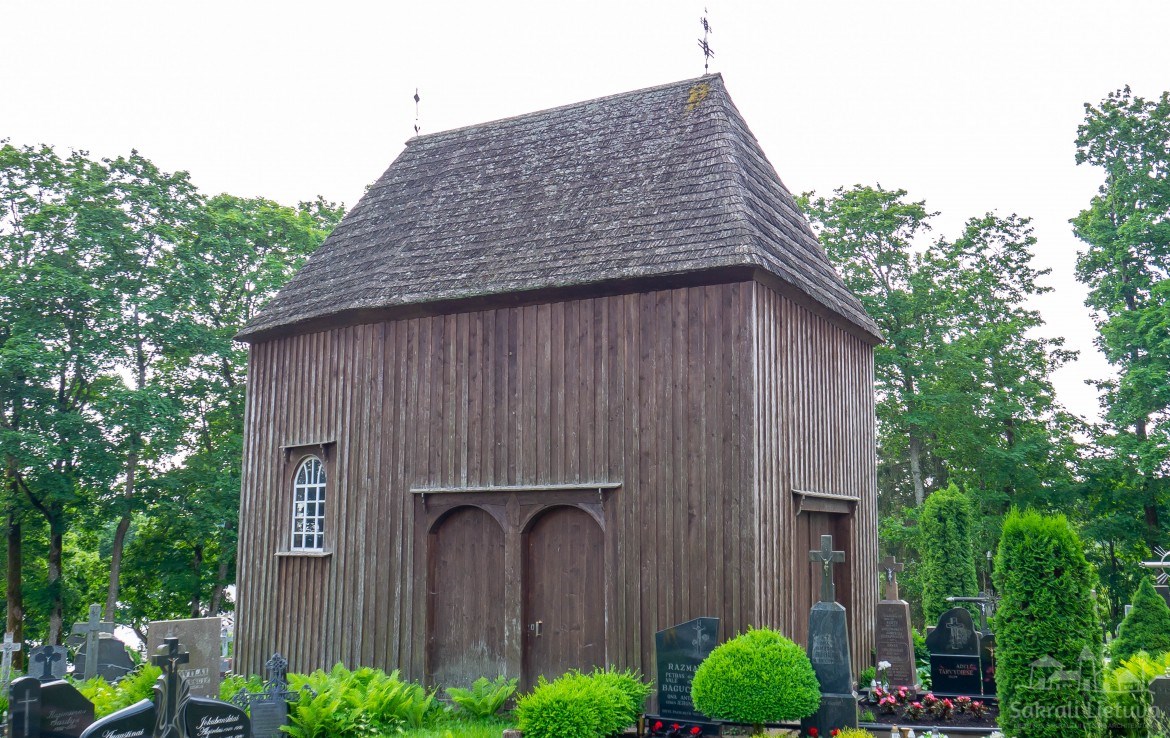 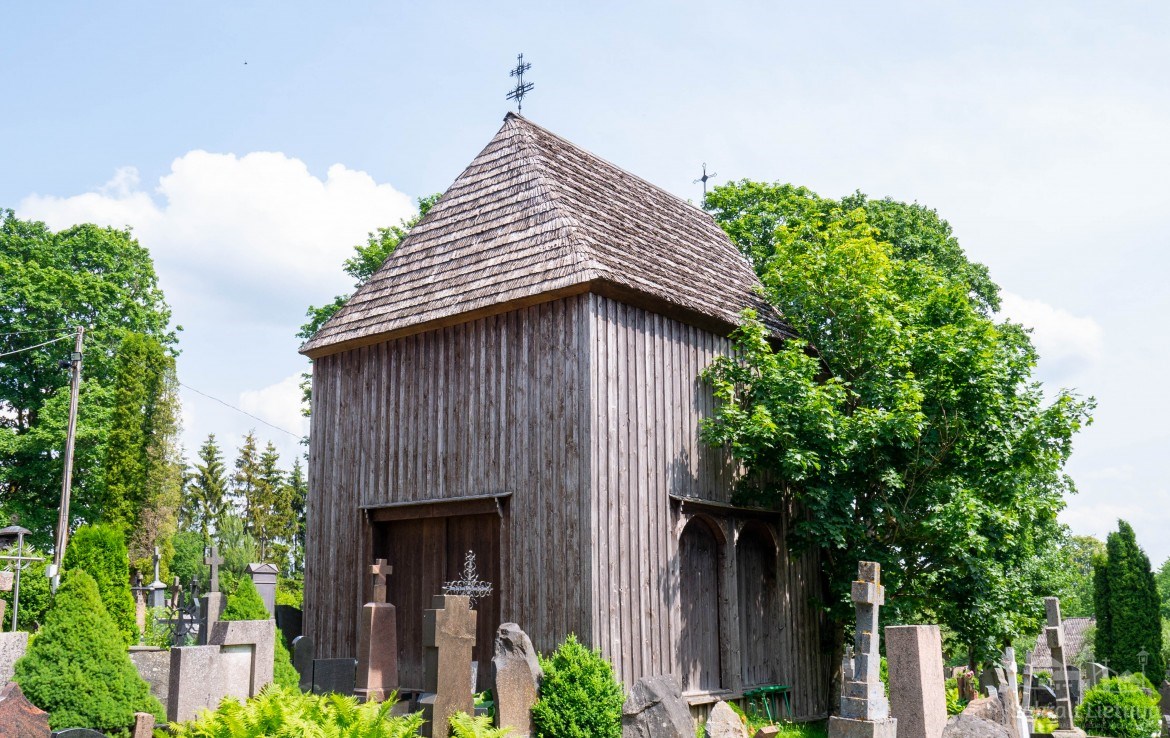 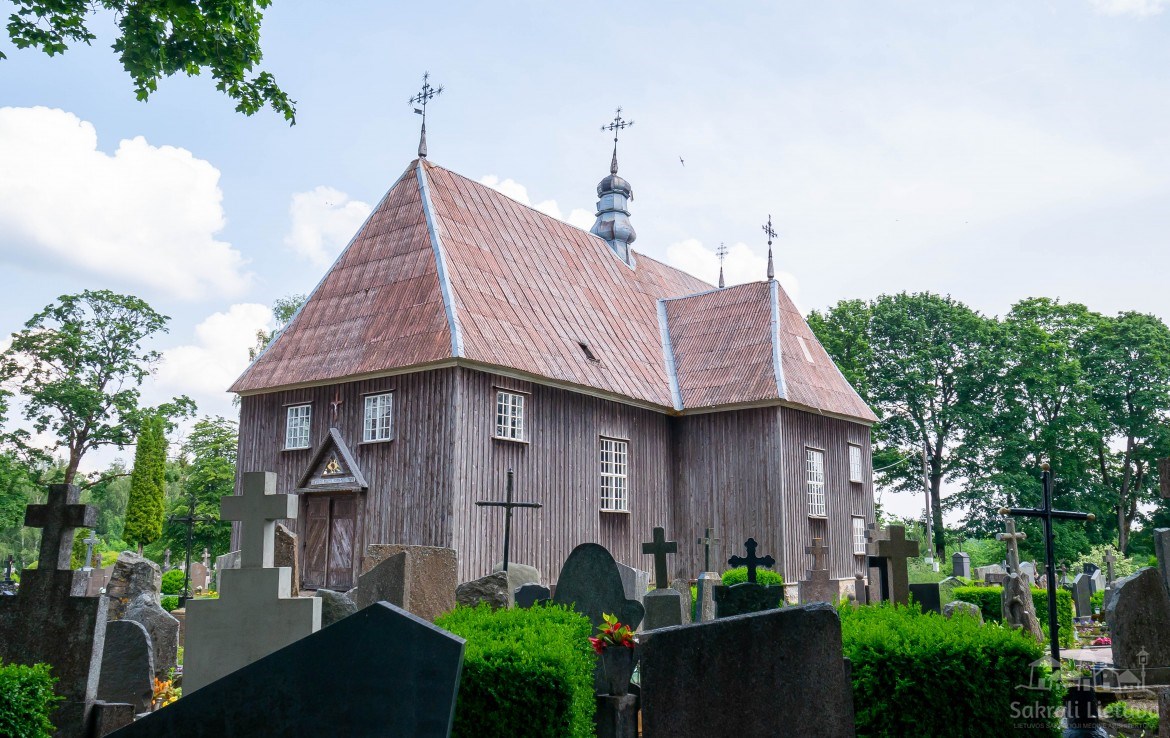 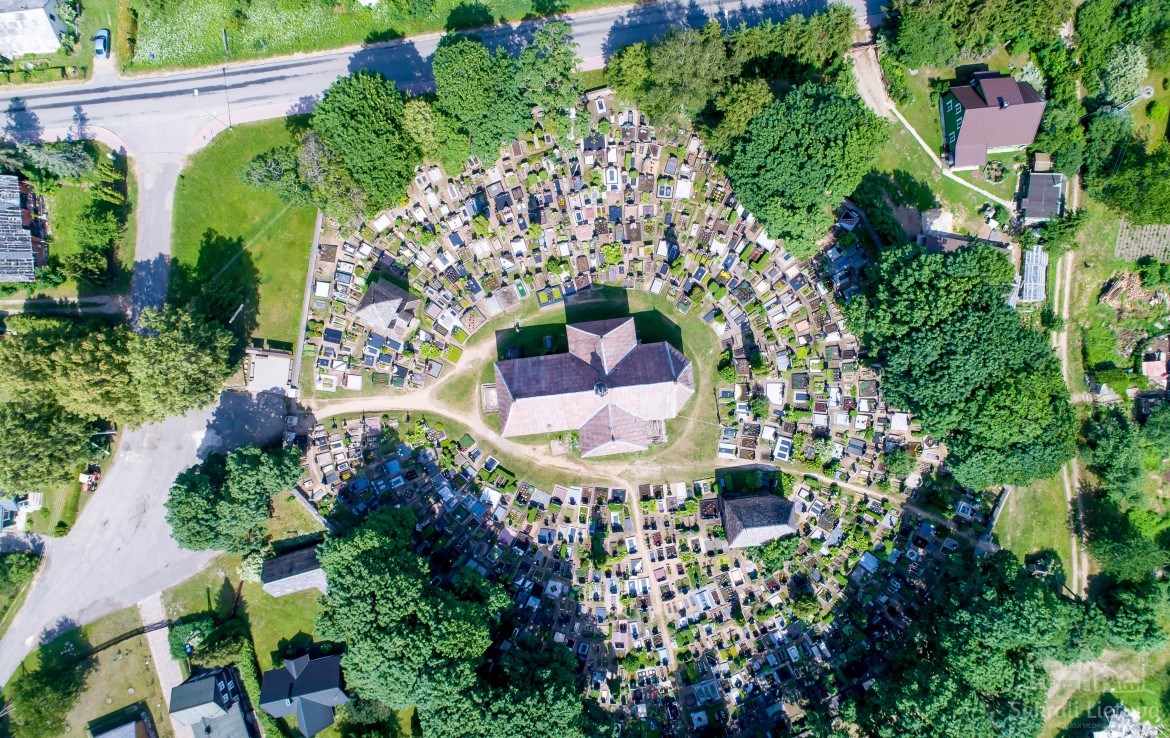 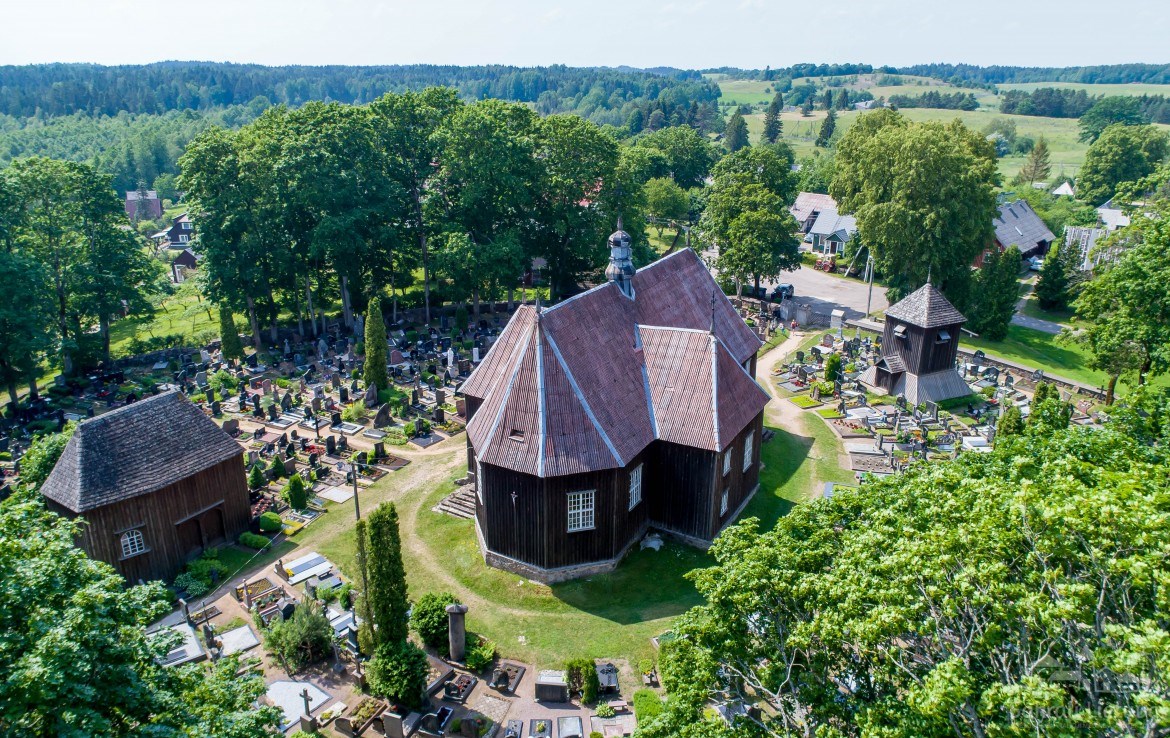 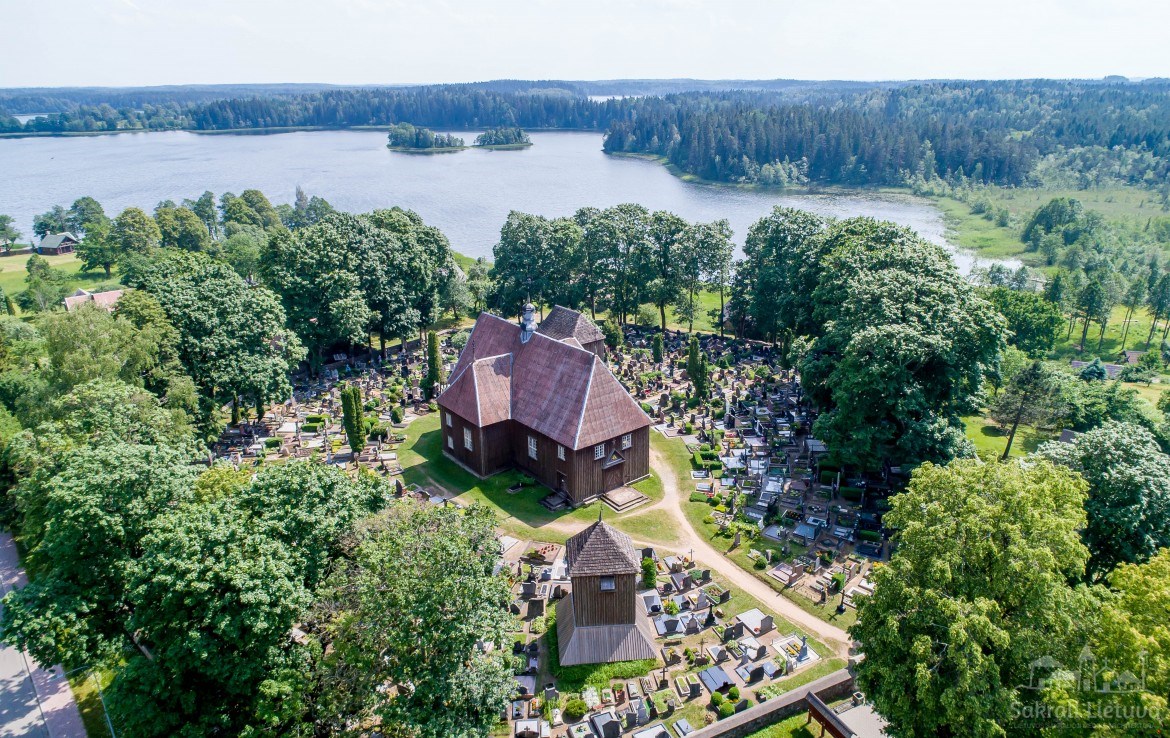 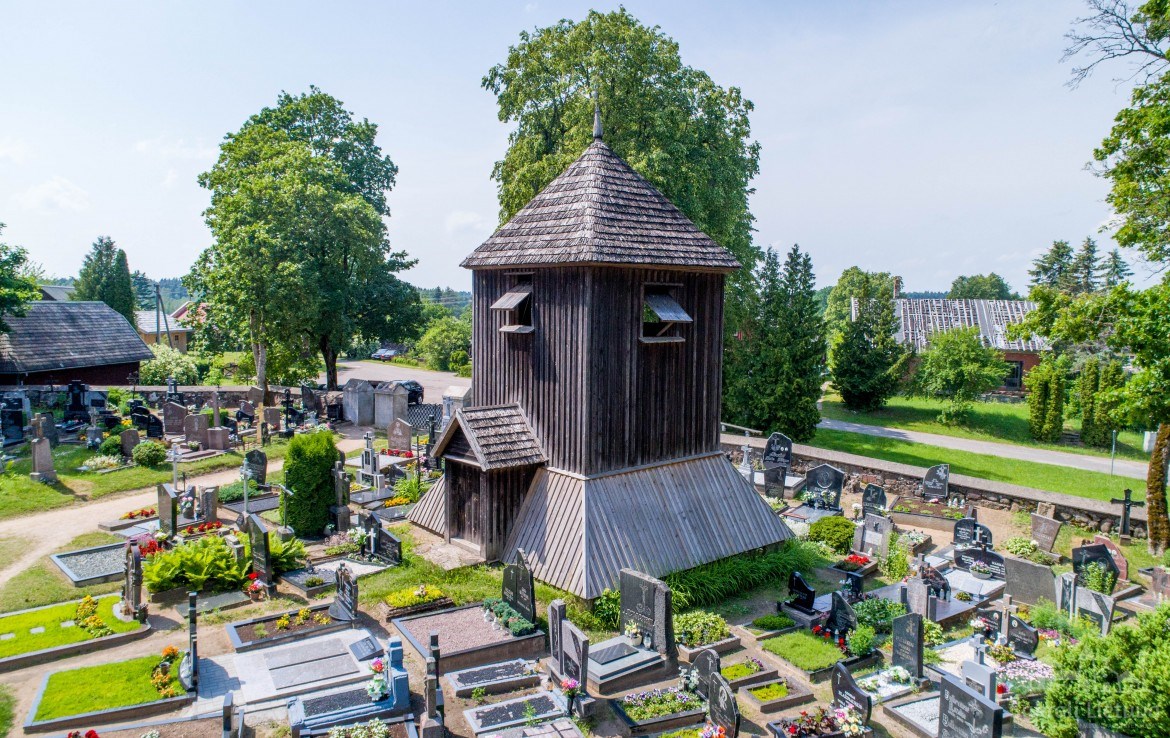 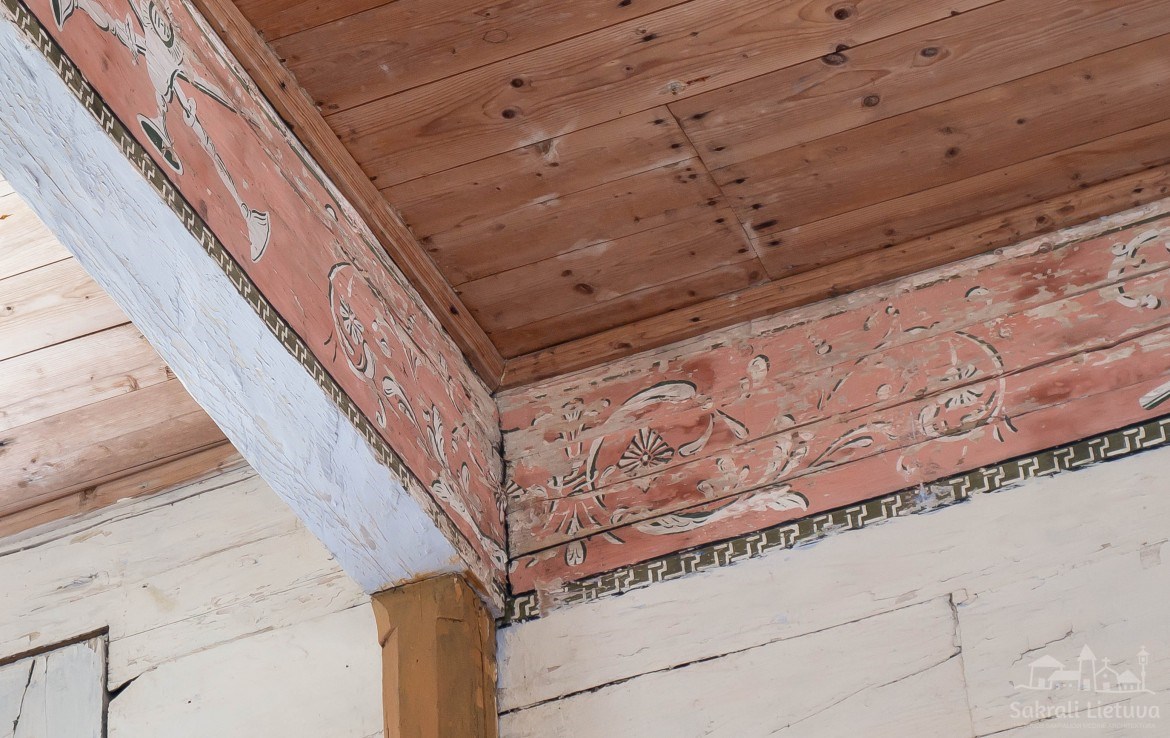 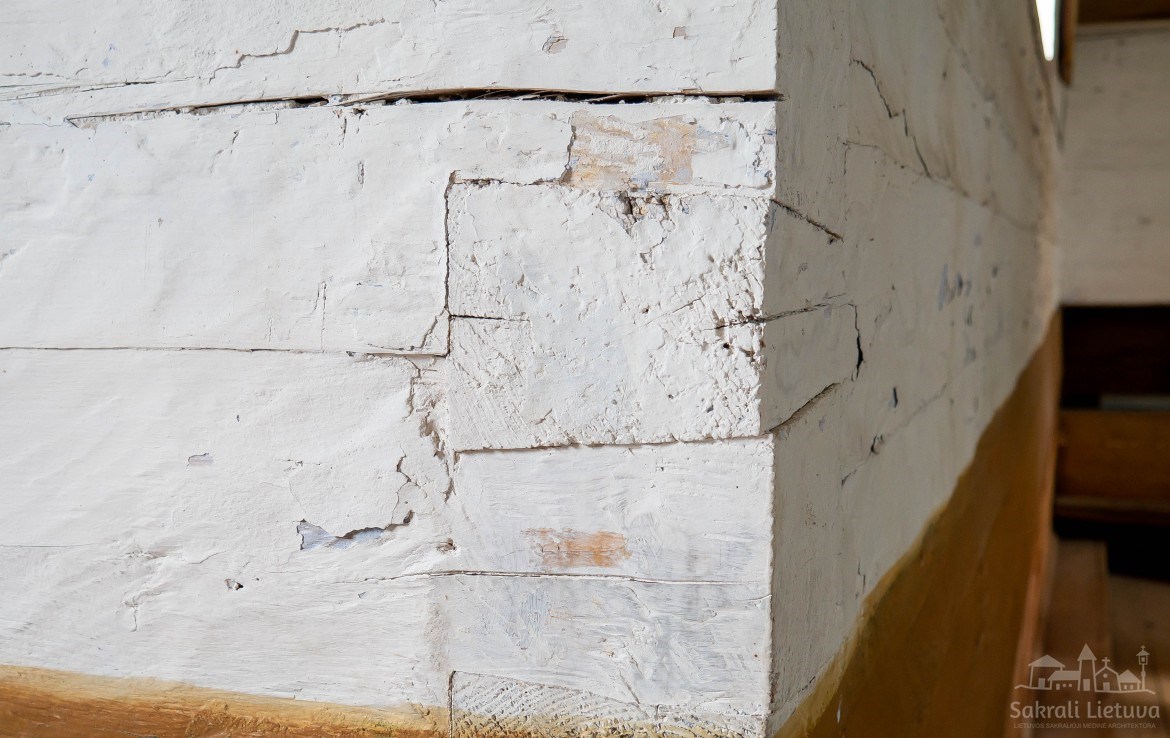 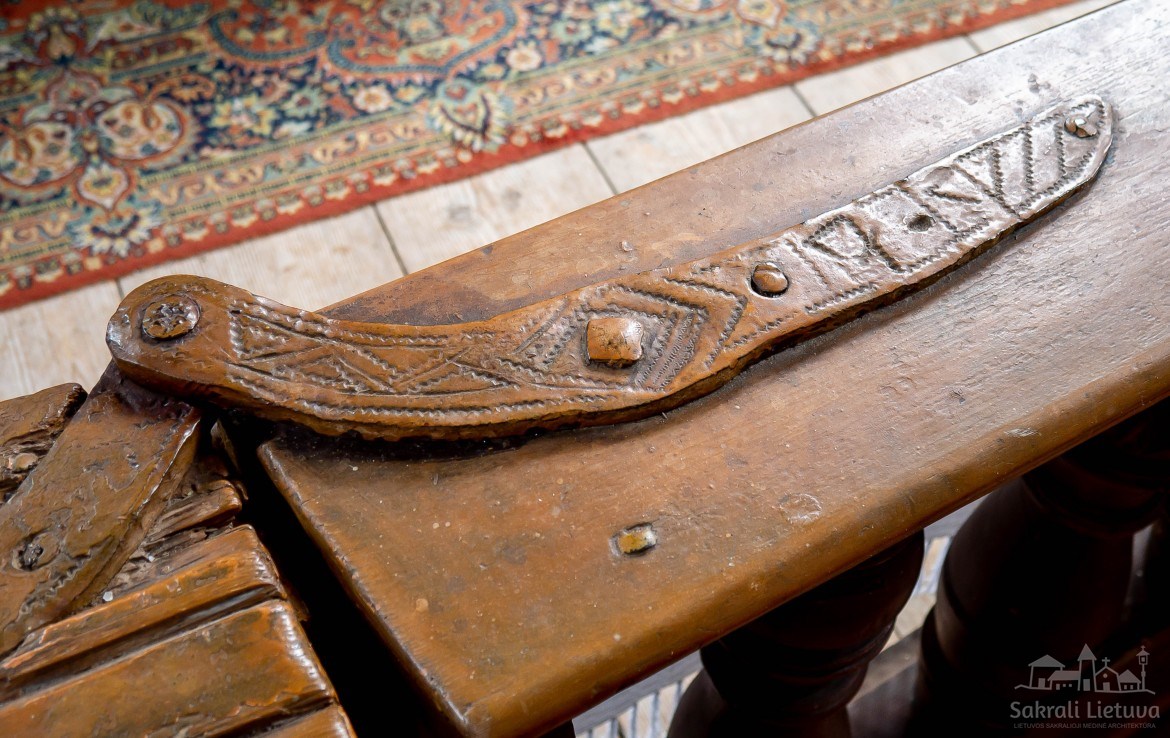 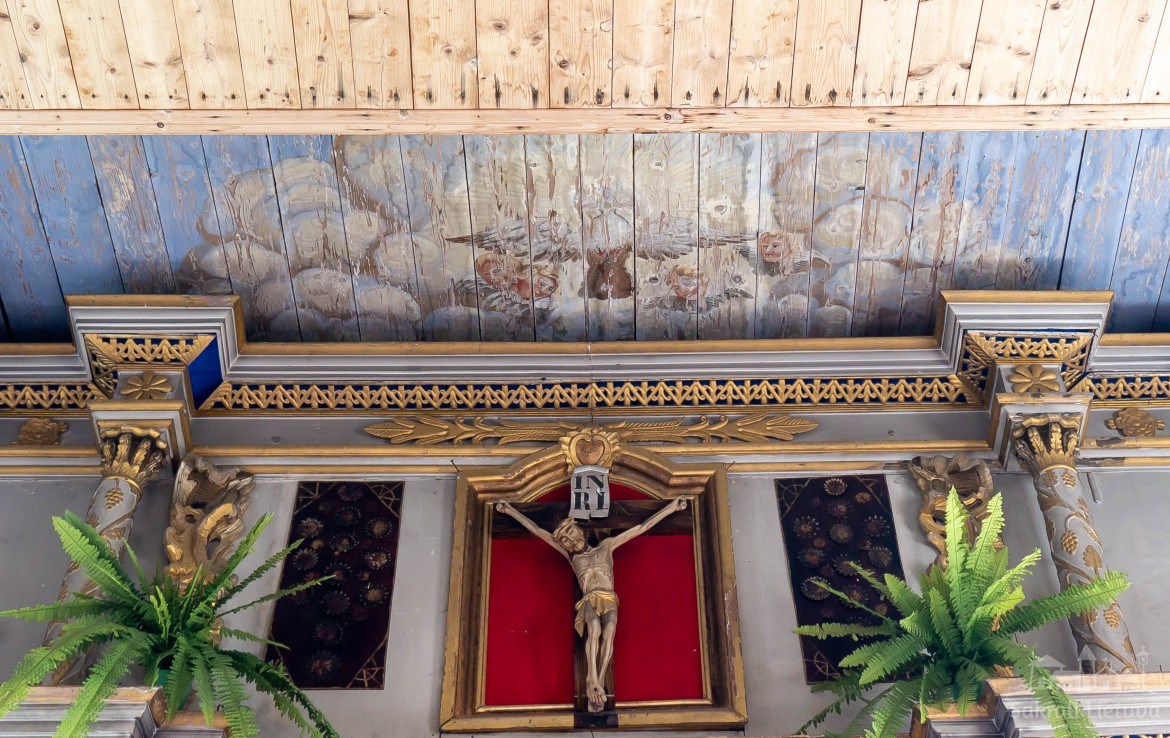 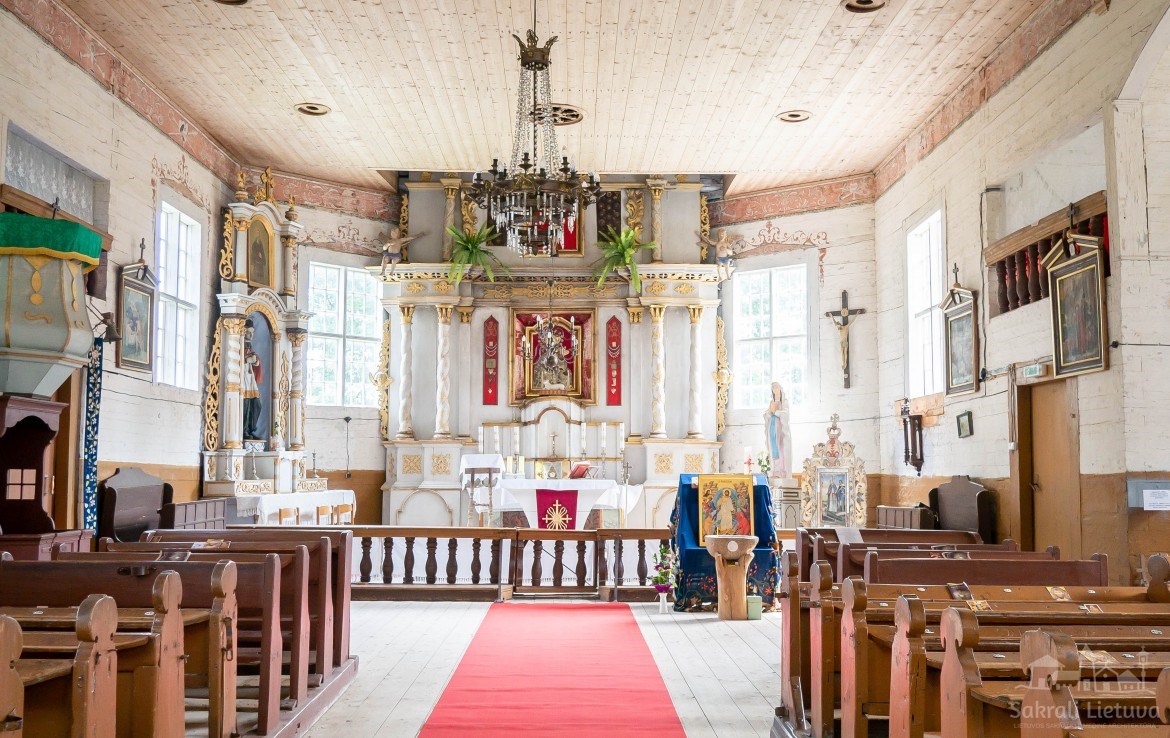 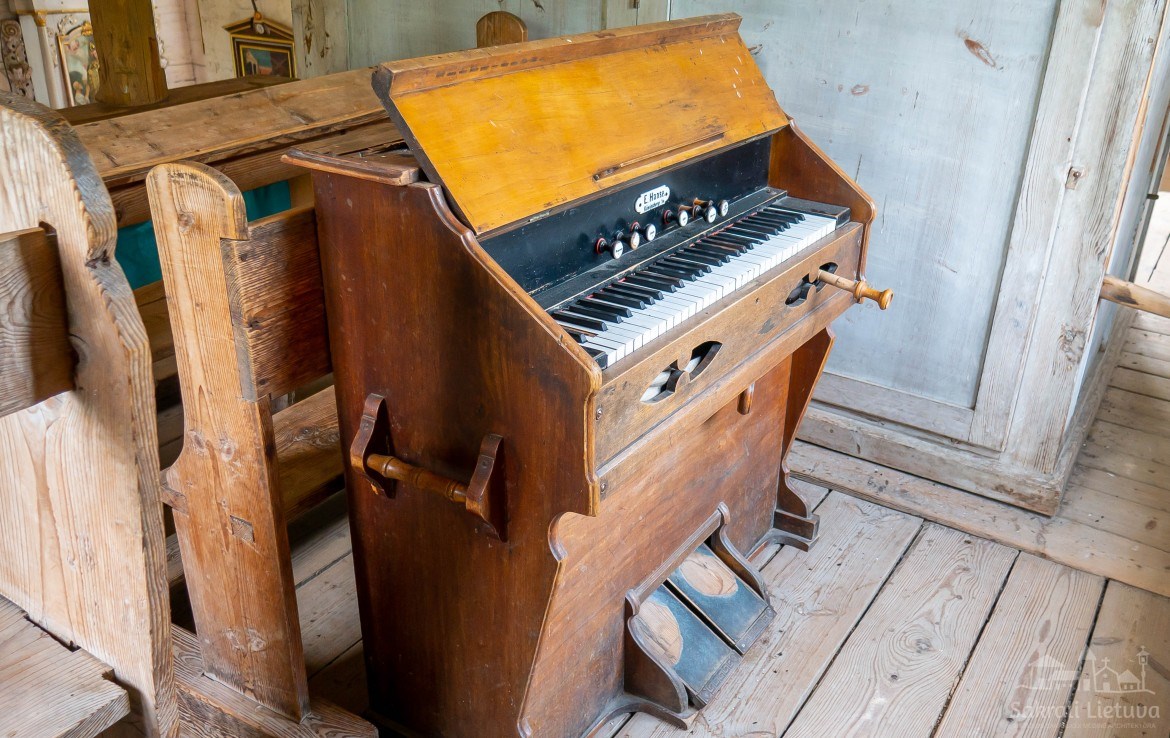 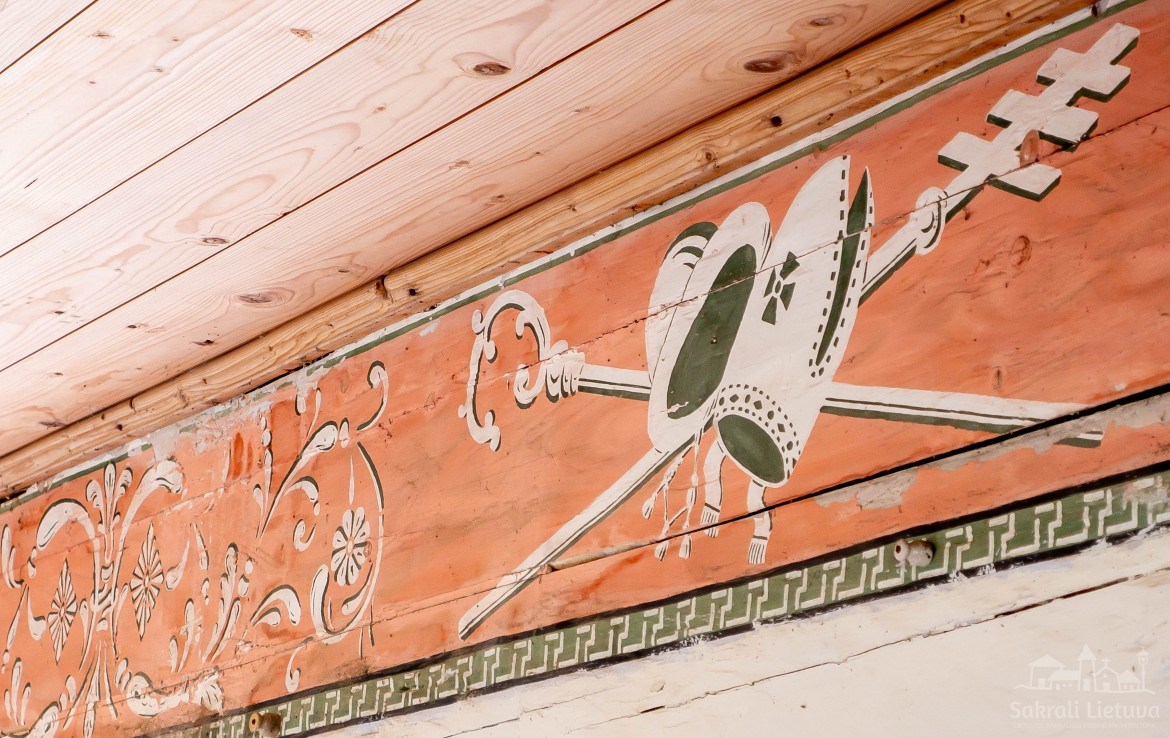