Akmens village in Varena district is enshrined in legends, and the church located there is one of the oldest Catholic sacral buildings of a rectangular layout remaining in Lithuania and dating back to the middle of the 18th century. The very name of the village comes from an ancient legend about a cursed stone still located near the settlement. This mythologized stone, presumably having seen the pre-Christian Old Faith or the previous sanctuary located there, was later wrapped in myths intertwined with Christianity. According to legends, a mother cursed her daughter who was on the way to get married and she turned into stone. According to another myth, a girl made to marry a rich old man started crying and said, Poor me, I’d rather turn into a stone than marry an old man, and having said it she turned into stone. This stone really resembles a girl’s figure, therefore previously, during holidays local inhabitants used to decorate the stone with girls clothes, and girls from the surrounding villages used to come here to unburden their hearts. There are other versions, as well: according to other legends, the stone is a petrified serpent that blocked the way for monks on the way to baptize Lithuanians. By the middle of 20th century, the Stone of the Cursed Girl was frequently visited by pilgrims, especially on the tenth Friday after Easter. They made vows, donated food, flax, linen, money.

The nearby church stands out for its construction and architectural value. It was built in 1759, using the old way of joining hewn logs, using only axes and no single nail. In the village of Daugai Parish the building was built as a chapel, after its construction was initiated by Lieutenant General Adam Brzostowski of the Army of the Grand Duchy of Lithuania. In 1861, the chapel was renovated, and during World War I, after the Varėna church burned down in 1915, its pastor Juozapas Stašys, who moved to the Akmens Village, expanded the chapel and established a parish there.

The church is wooden, of folk architecture, its form resembles a residential house. The sacral purpose of the building is revealed by a triangular apse and ornamental forged crosses above the main facade and above the presbytery. The sacristy and porch are located next to the side facades. The foundation of the church is made of field stones, and the walls are made of thick pine logs reinforced with perpendicular braces. The church acquired the present appearance at the beginning of the 20th century when it was extended lengthwise and its windows were enlarged.

The interior of the church is modest, as well. The great altar features a sculpture of the Crucifix created in 18th century, famous for its graces. The graces experienced thanks to it are witnessed by vota, which are symbols of gratitude, suspended next to the sculpture.

The pillar belfry located in front of the church is one of the few most primitive belfries remaining in Lithuania. It has two sections, the first of which is covered by a gable roof made of wood shingles and the second one is completely open, with three bells of different sizes installed on a crossbar mounted on two vertical side struts, with an ornamented forged cross fixed on the top of the gable roof peak. It is believed that this belfry was built at the beginning of the 19th century, and renovated in the 20th century. 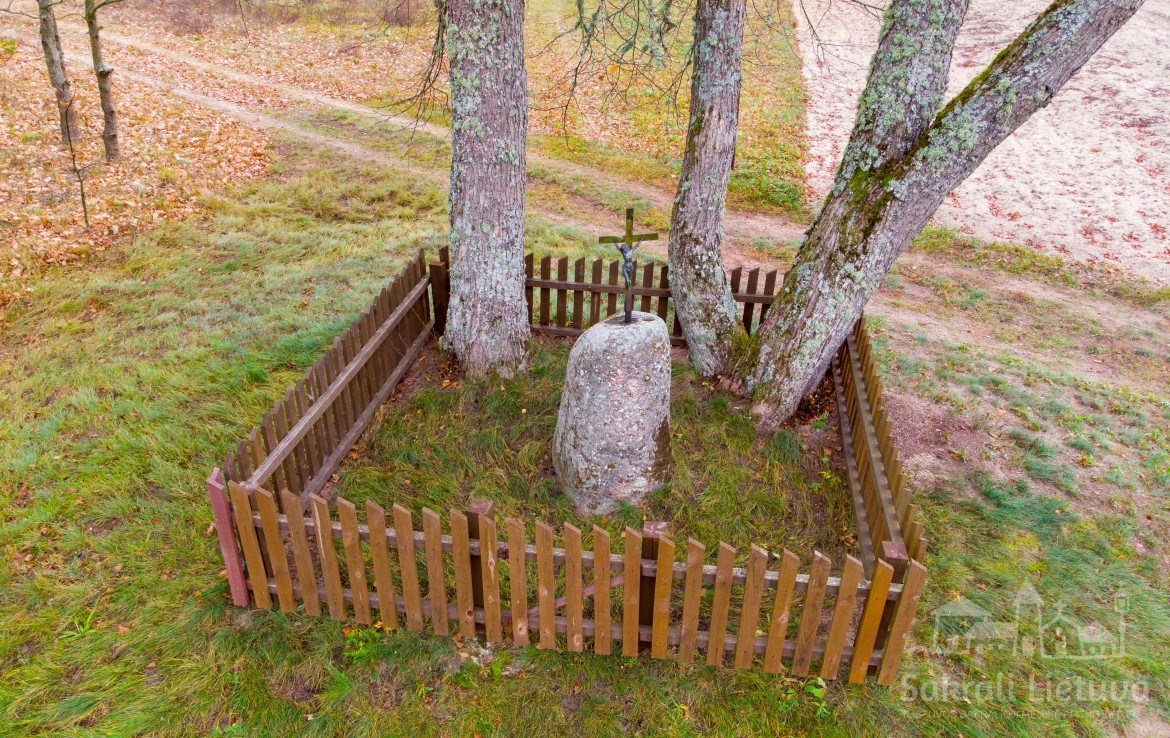 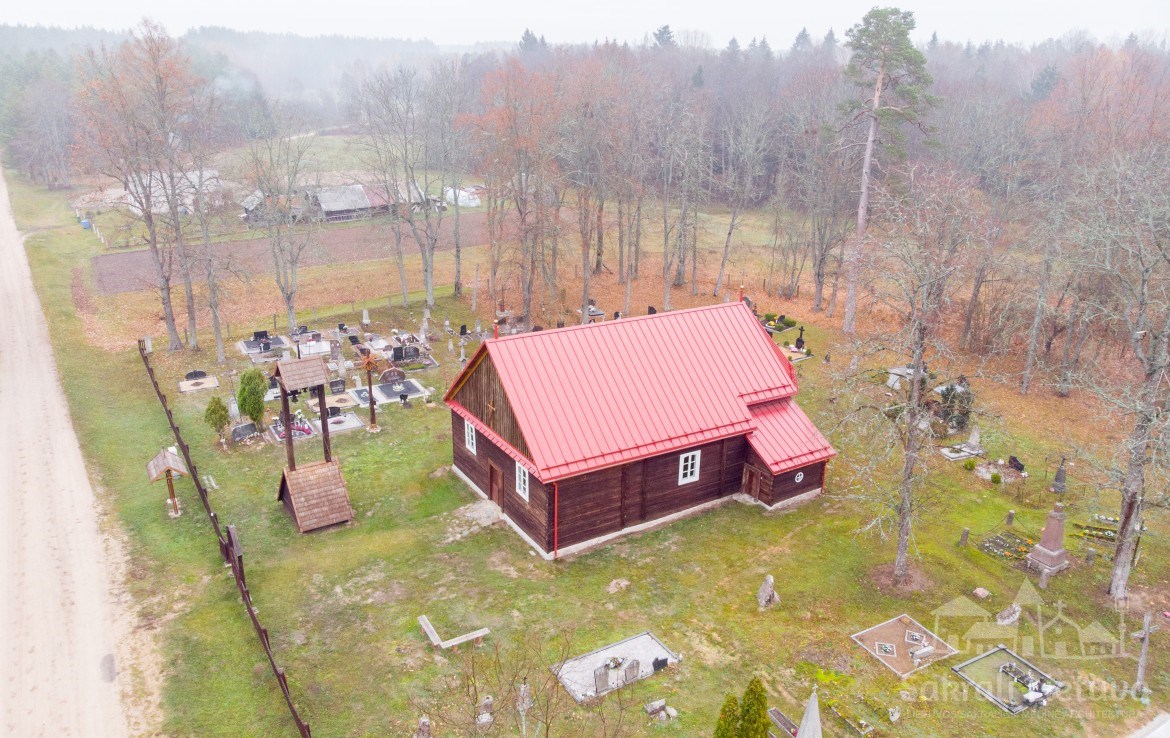 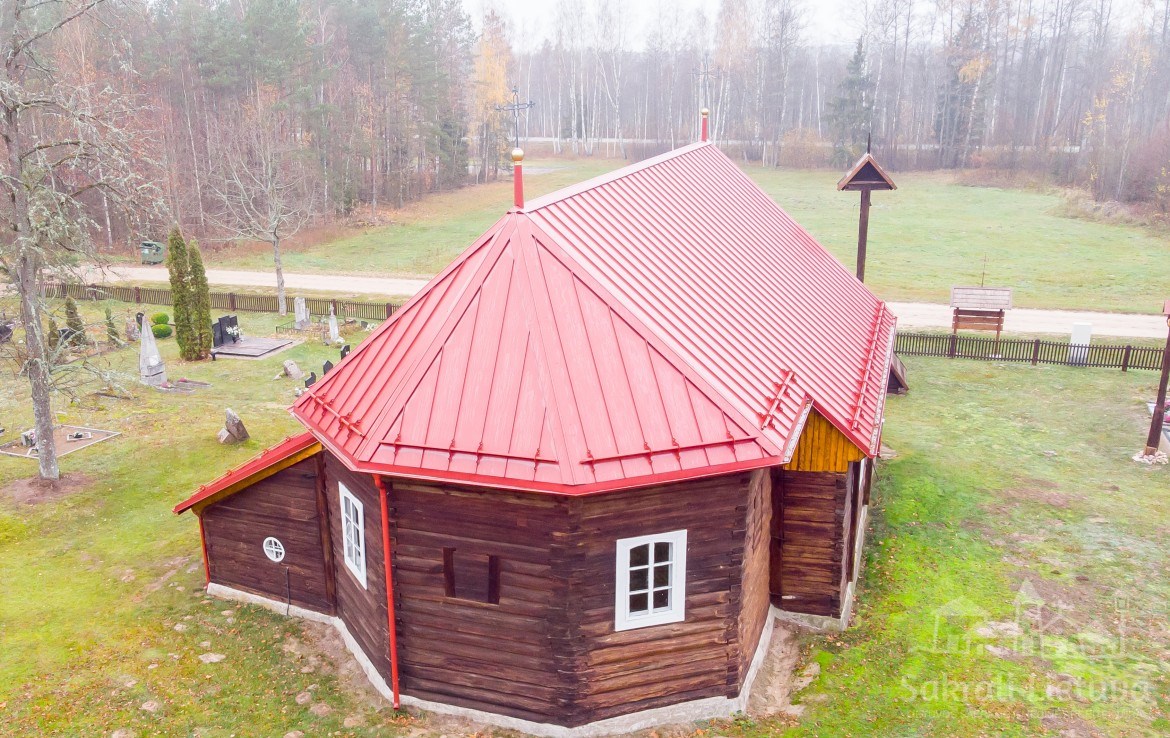 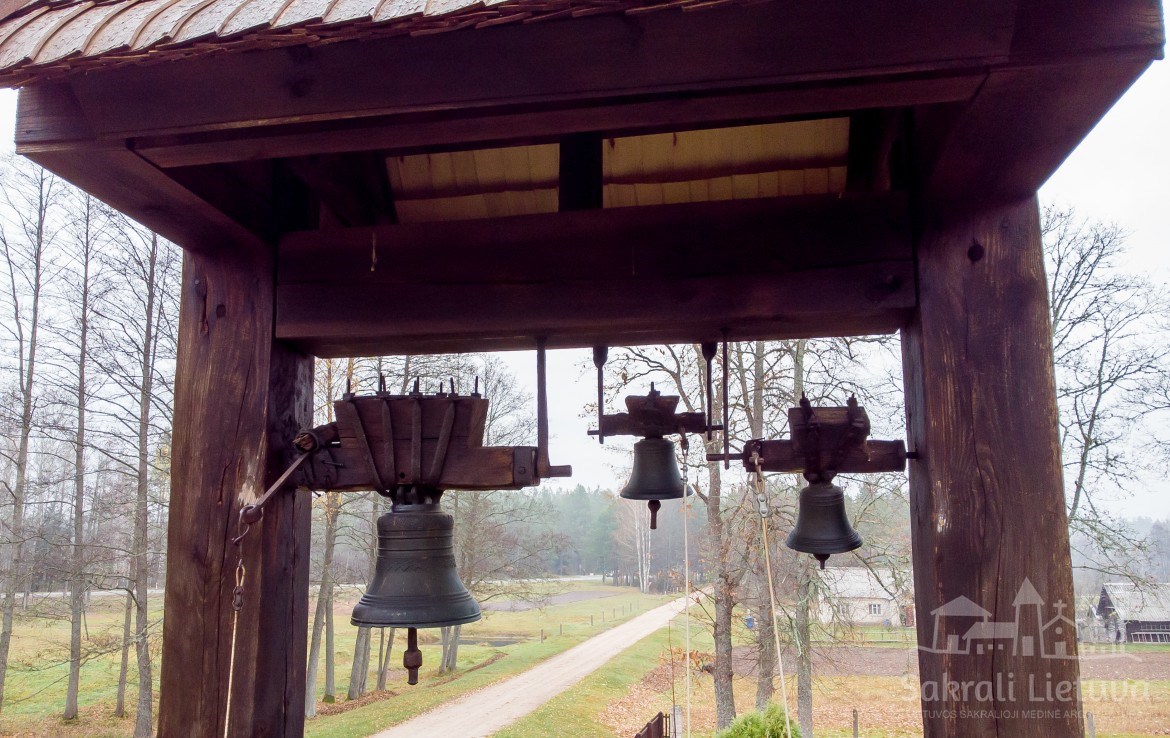 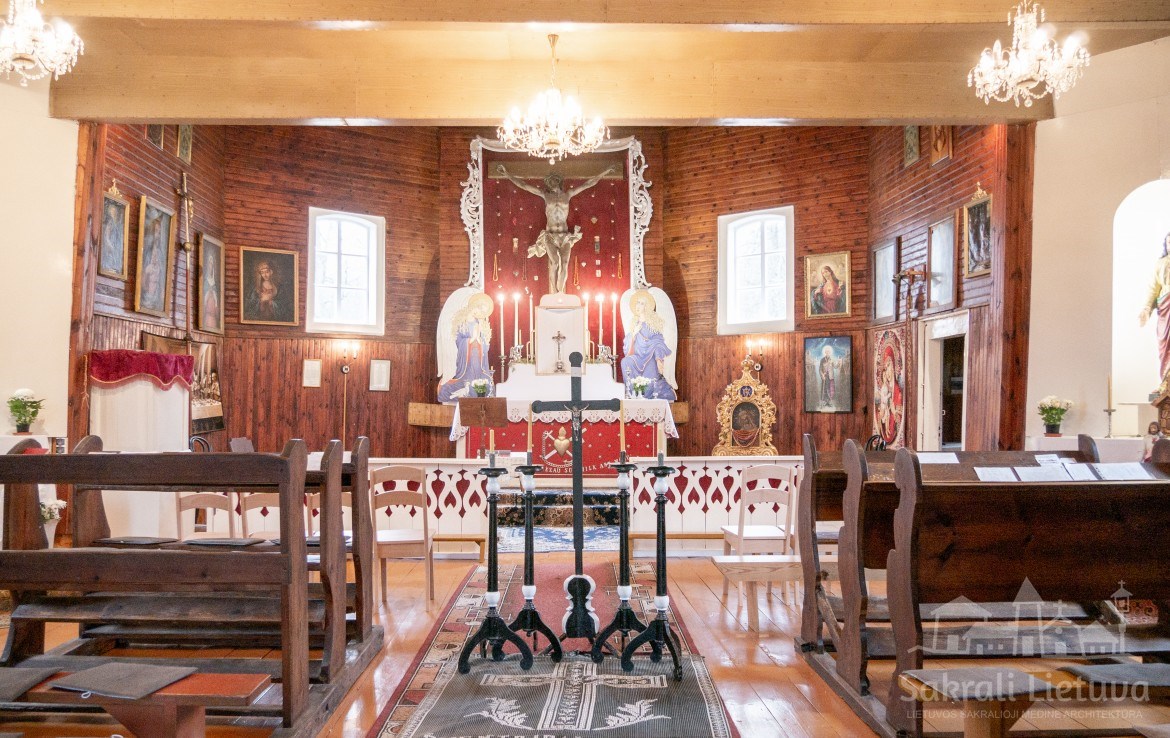 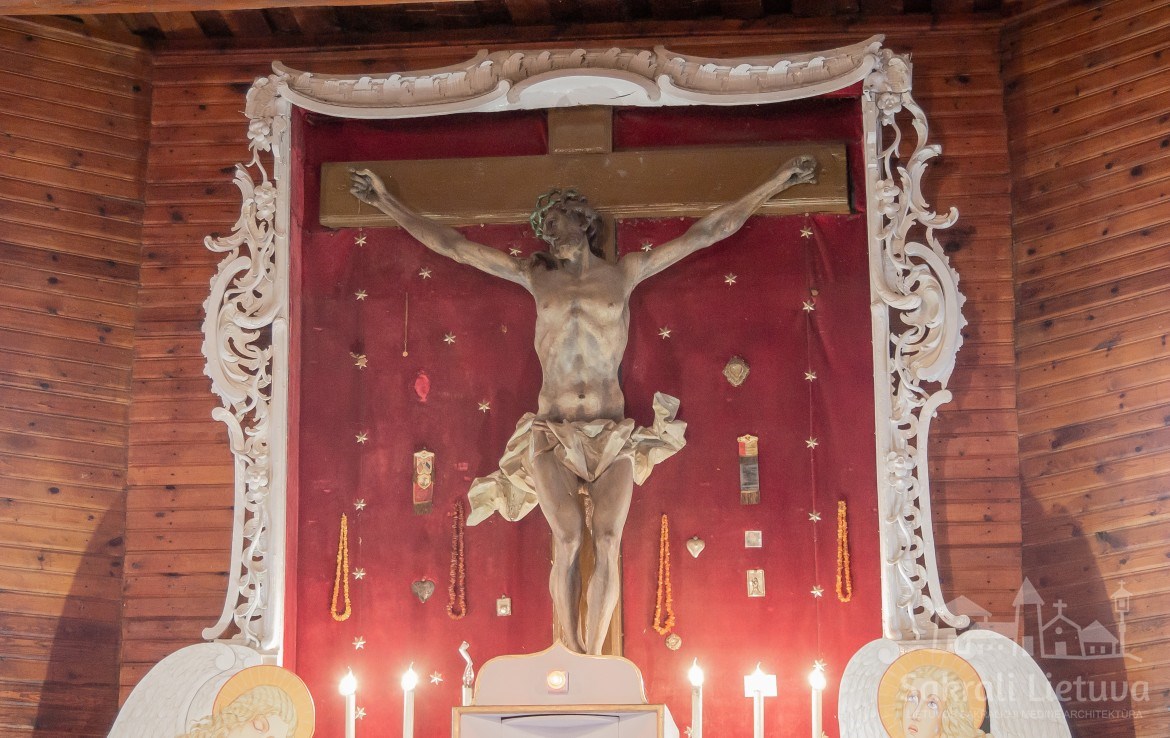 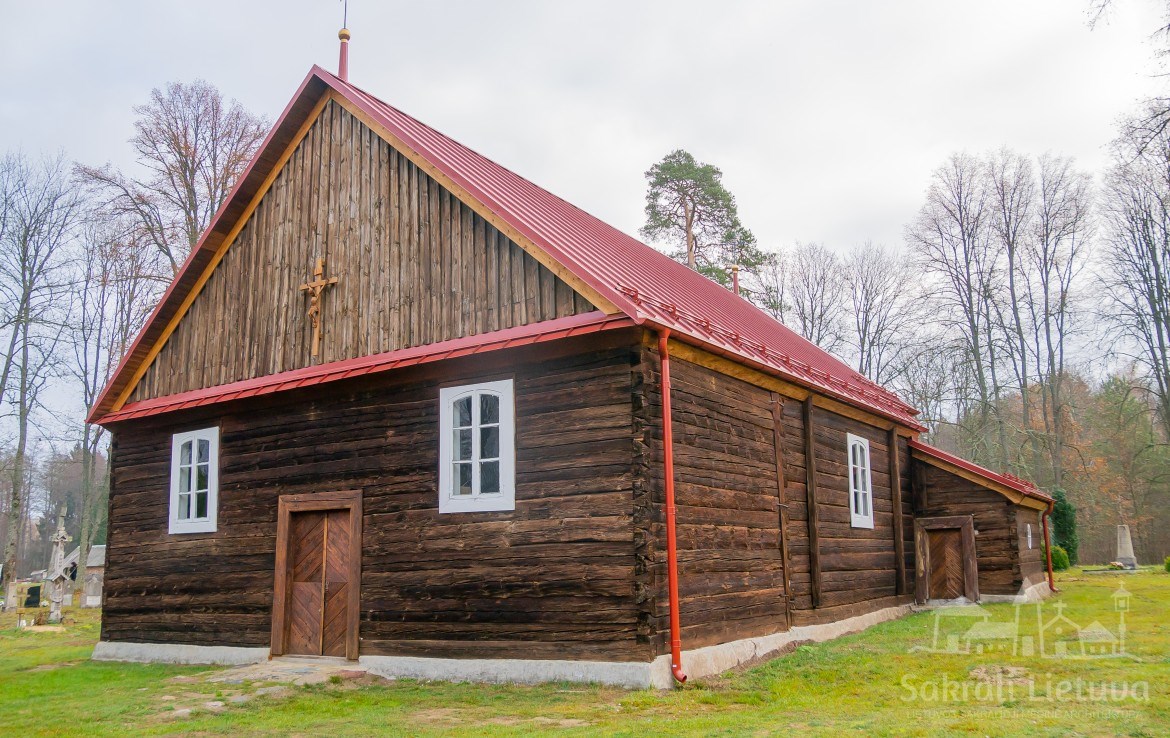 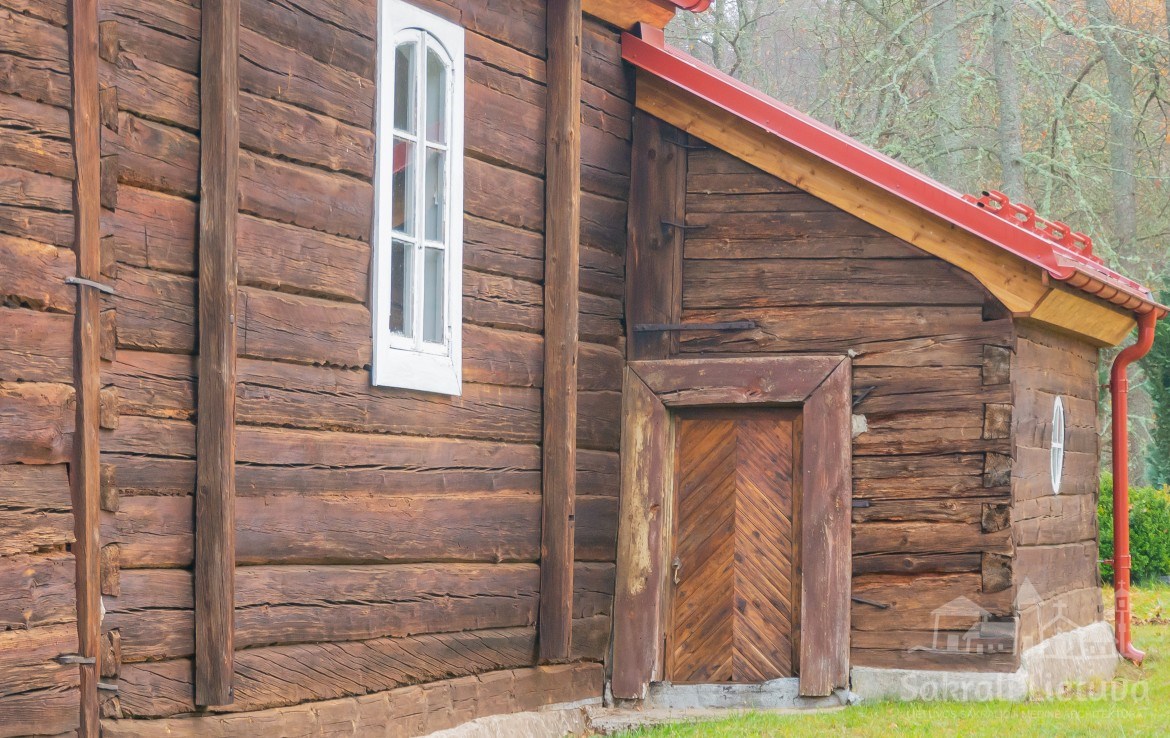 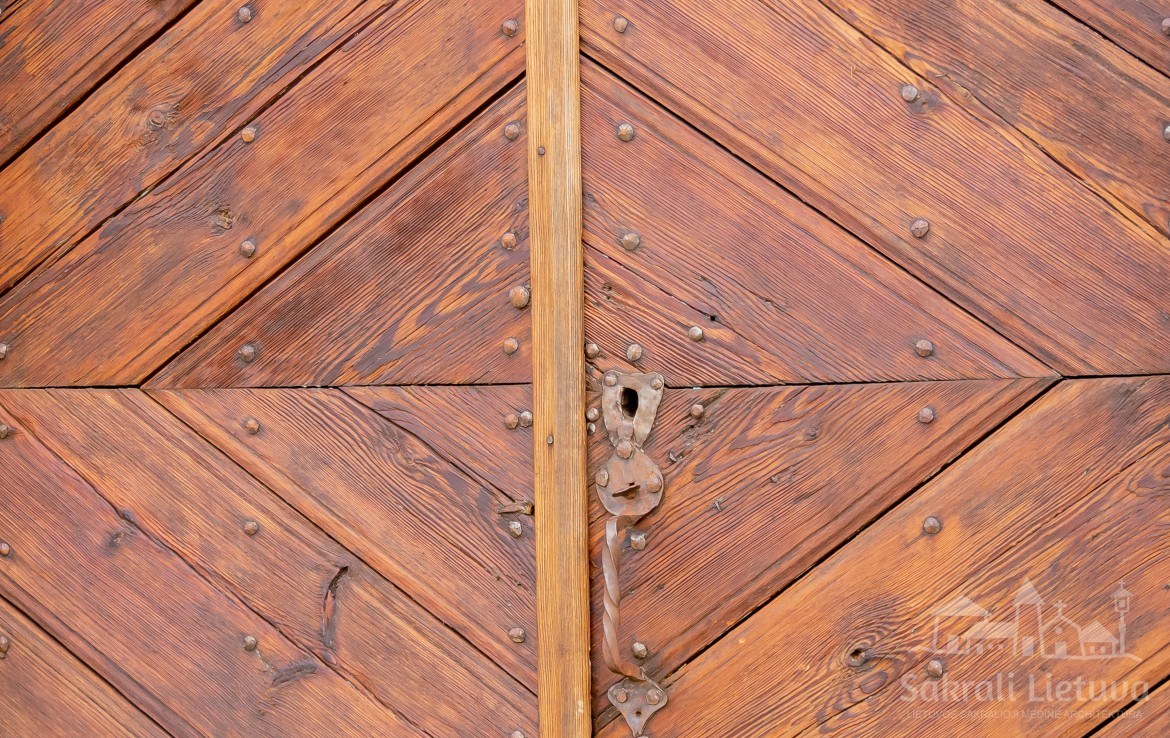 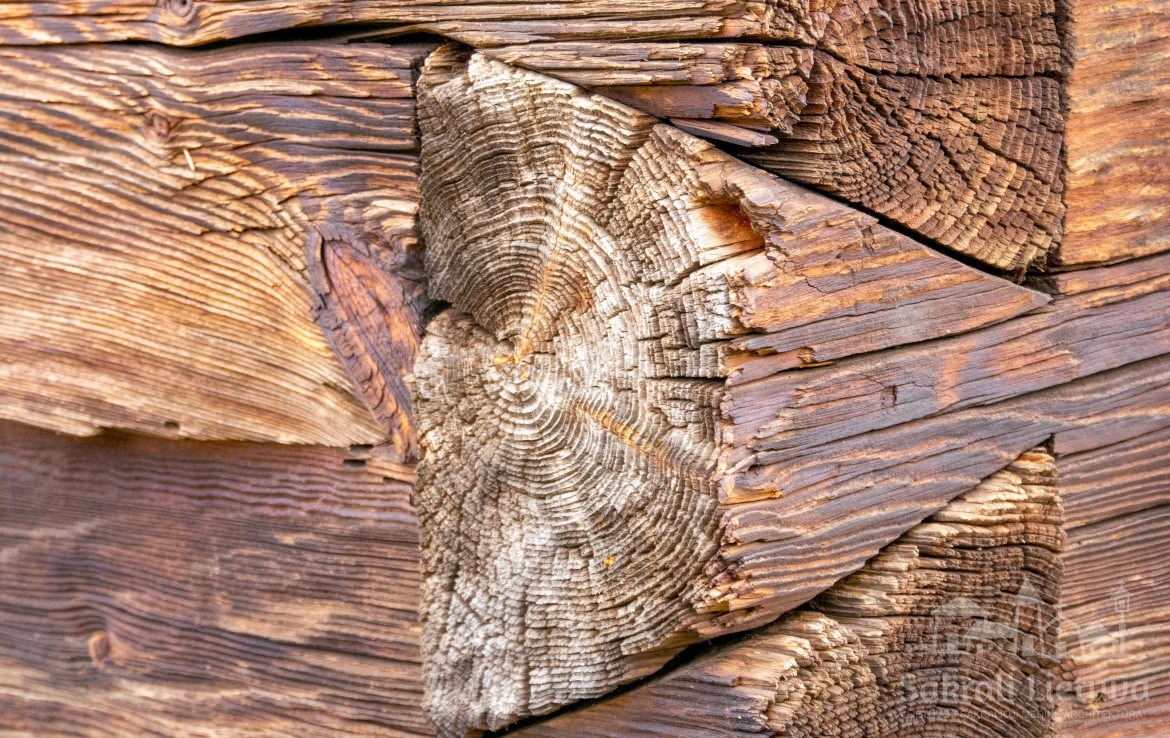 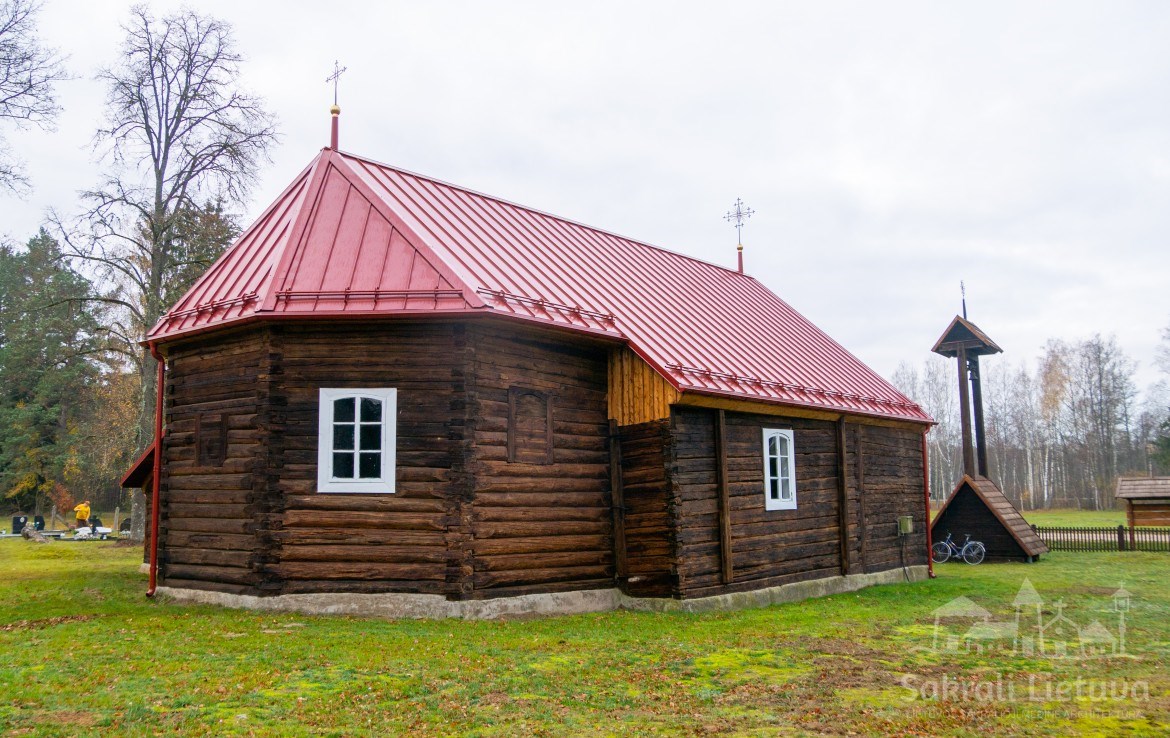 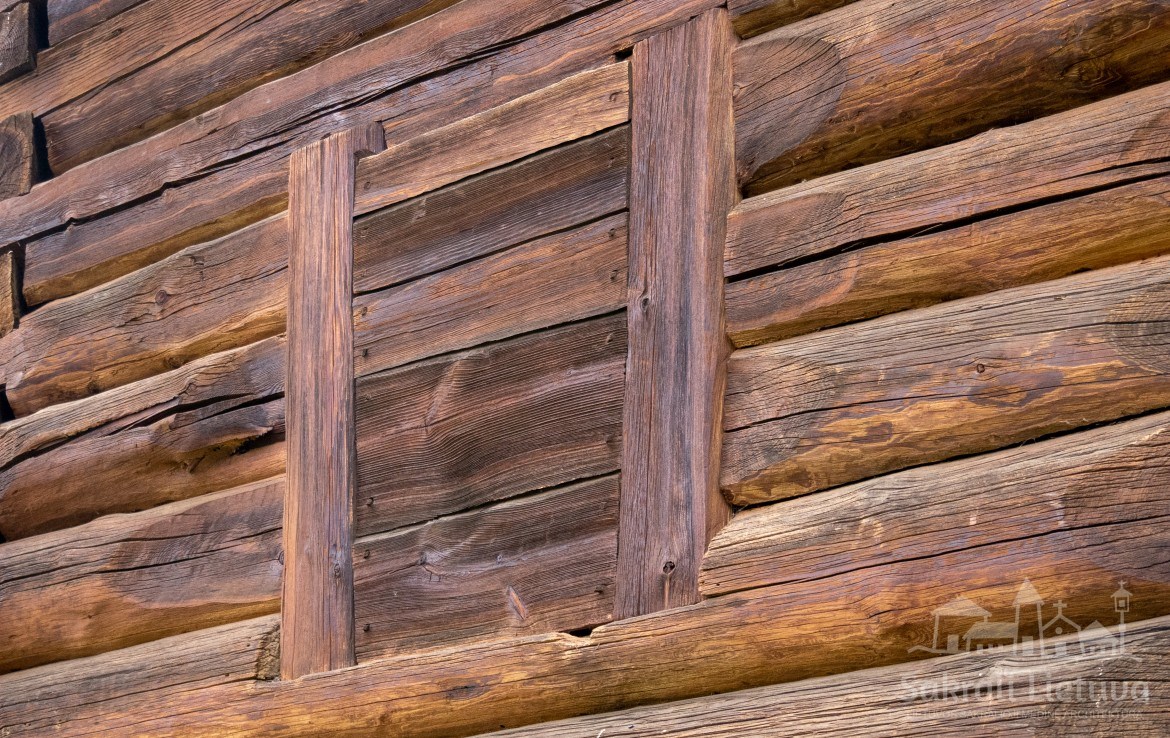 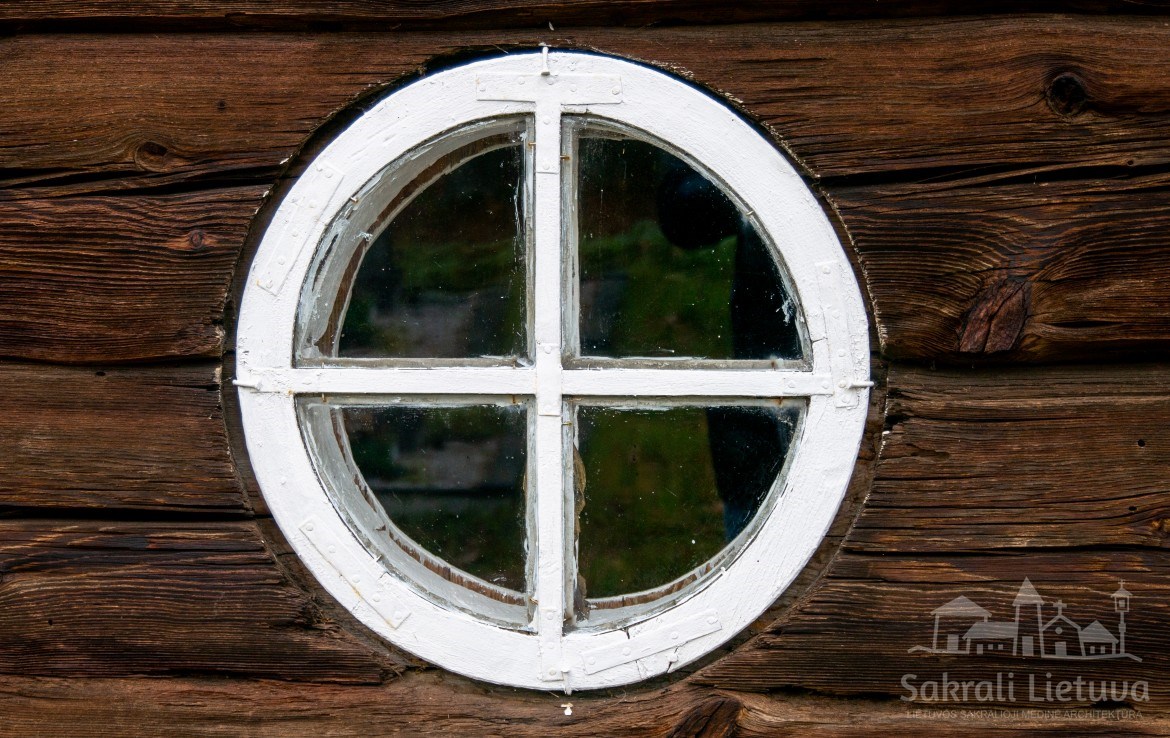 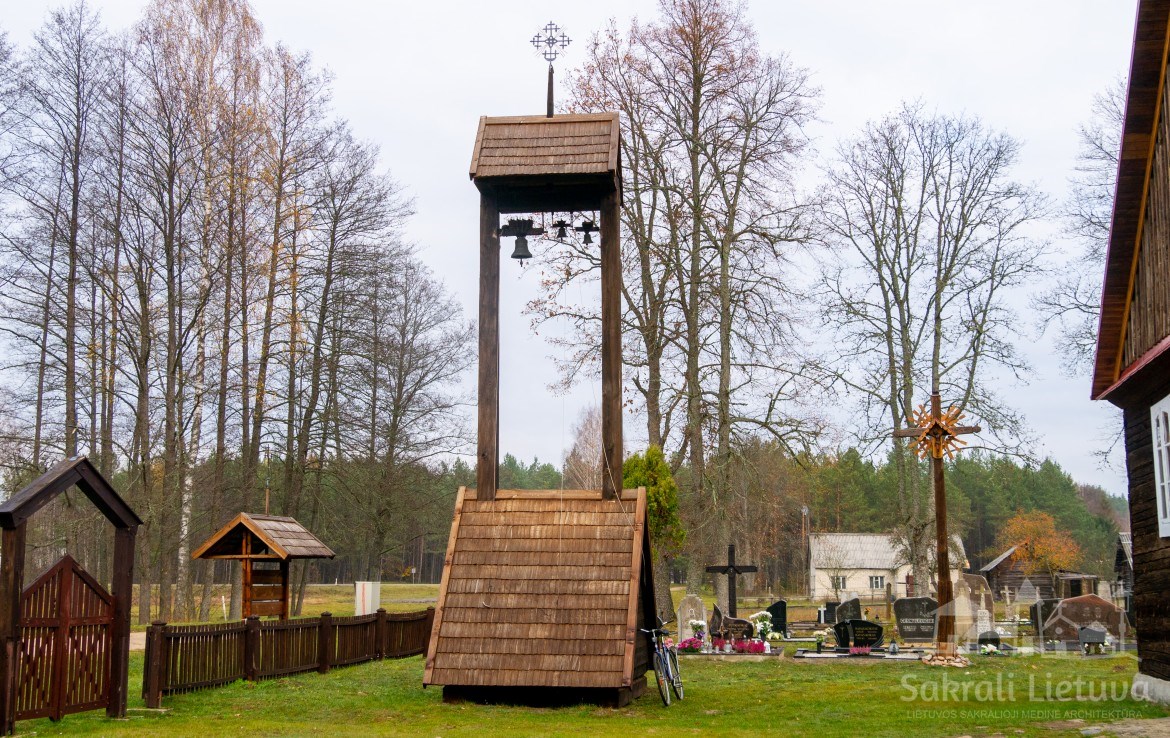 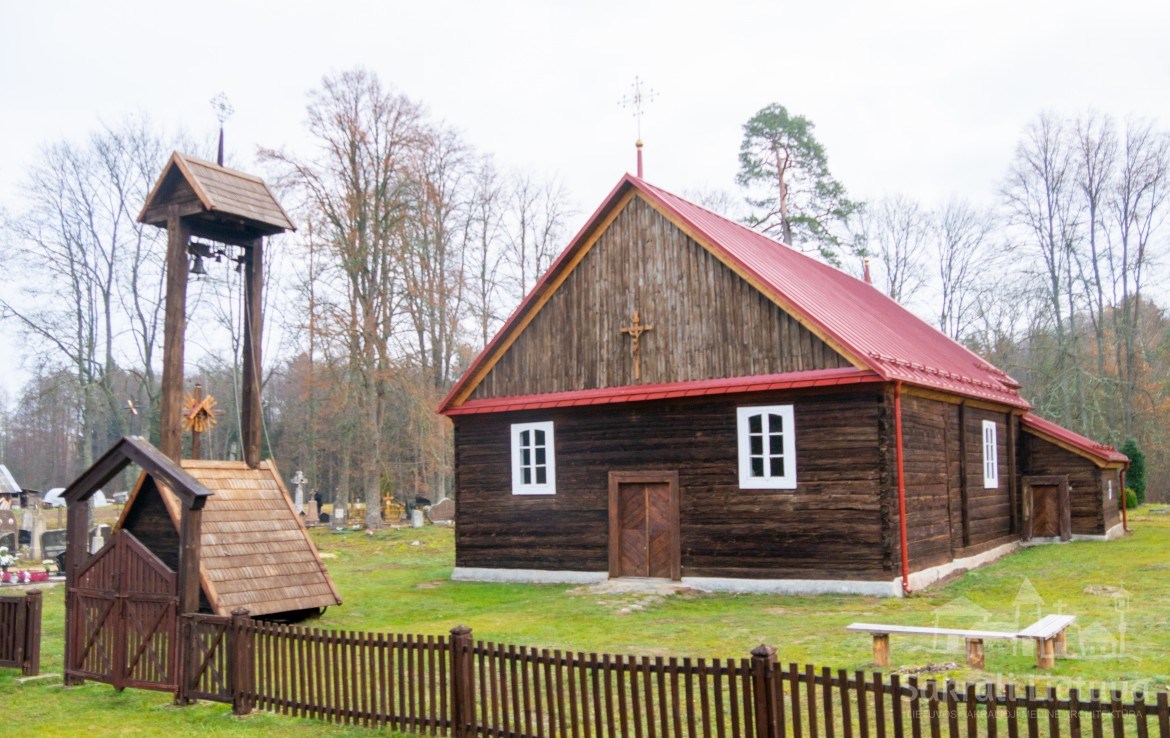