The Samogitian diocese and the Church dedicated to St. Alexander (the baptismal name of Vytautas the Great) were founded in Varniai 600 years ago. The most prominent figures of the clergy, culture and history used to assemble there for nearly 450 years, the Theological Seminary of Varniai functioned, Samogitian Bishop Motiejus Valančius disseminated the ideas of temperance among the Samogitians and Lithuanians, taught them to write in Lithuanian, a large group of priests and ministers of religion worked in two parishes.

The first church in Varniai was built as far back as the beginning of the 15th century. The current Church, the fourth one, funded by the Bishop of Samogitia Jonas Dominykas Lopacinskis was built in 1770. After the centre of the Samogitian diocese was moved to Kaunas in 1864, it became the Senieji Varniai Parish Church. The Catholics who lived on the right bank of the Varnelė River belonged to it. In 1949, the Church was converted into a warehouse and it was only after 1991 that it was returned to its parishioners and restored.

The wooden Church of Varniai is an example of the late Lithuanian baroque and wooden folk architecture. It is one-storied with an especially elaborate turret of baroque forms. The three-nave Church of a rectangular plan is of small volume with a narrower pentahedral apse. The facades are boarded with vertical planks with narrower battens on the joints, only the turret has horizontal battening. A three-tier tower is of a rectangular plan with a multi-sided sloping pyramid roof with a forged metal cross; the tiers are tapering upwards and are separated by pent roofs. At the other end of the gable roof, over the apse there is a small open quadrangular turret with a four-sided sloping capping with a forged metal cross on it. Openings of the church windows a rectangular; the small windows of decorative segmentation installed in the pediment have a trapezoid or circular (imitation of a rosette) form; openings of the tower are arched.

Inside the church the naves are separated by three pairs of columns of a quadrangular cross-section, the organ choir balcony is supported by two columns of an octagonal cross-section joint by arches in the shape of a segment and two poles of a quadrangular cross-section. The transverse beam of the central nave contains an inscription immortalising the history of the church: “Pirmoji Bažn. M. 1414 Wieszpatie ! Buk Ant Musu Miłaszirdigas. Budawota M. 1770. Mał: 1889” [The First Church, 1414, Oh, Lord! Have Mercy Upon Us. Built in 1889]. The interior is decorated with mural, ceiling paintings. The picture of Saint Bishop Alexander is in the high altar.
At the end of the 19th – the beginning of the 20th century bishop Vincentas Juzumas carried out major repair works on the church and improved the environment: the churchyard was fenced with a brick wall covered with the shingle capping with four gates, fourteen chapel Stations of the Cross were raised above the wall. A new belfry with an ossuary was built on a stone foundation in the churchyard. The church underwent major repairs, it was extended by three fathoms (= 2.13 metres), a new forechurch was built and a tall elegant tower with glassed-in windows was built over it. In 1890, the inside of the church was painted by architect Galikanas Jurgelevičius. In 1938, the church was repaired again, the roof of the church was covered with roofing iron. 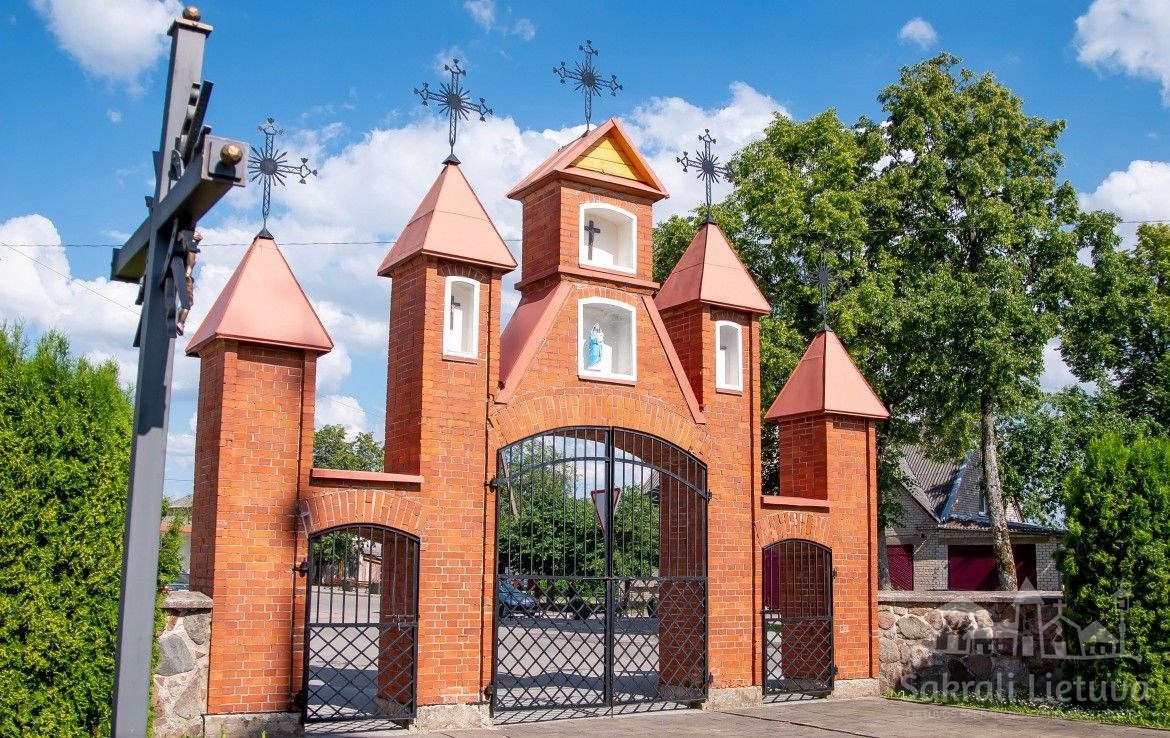 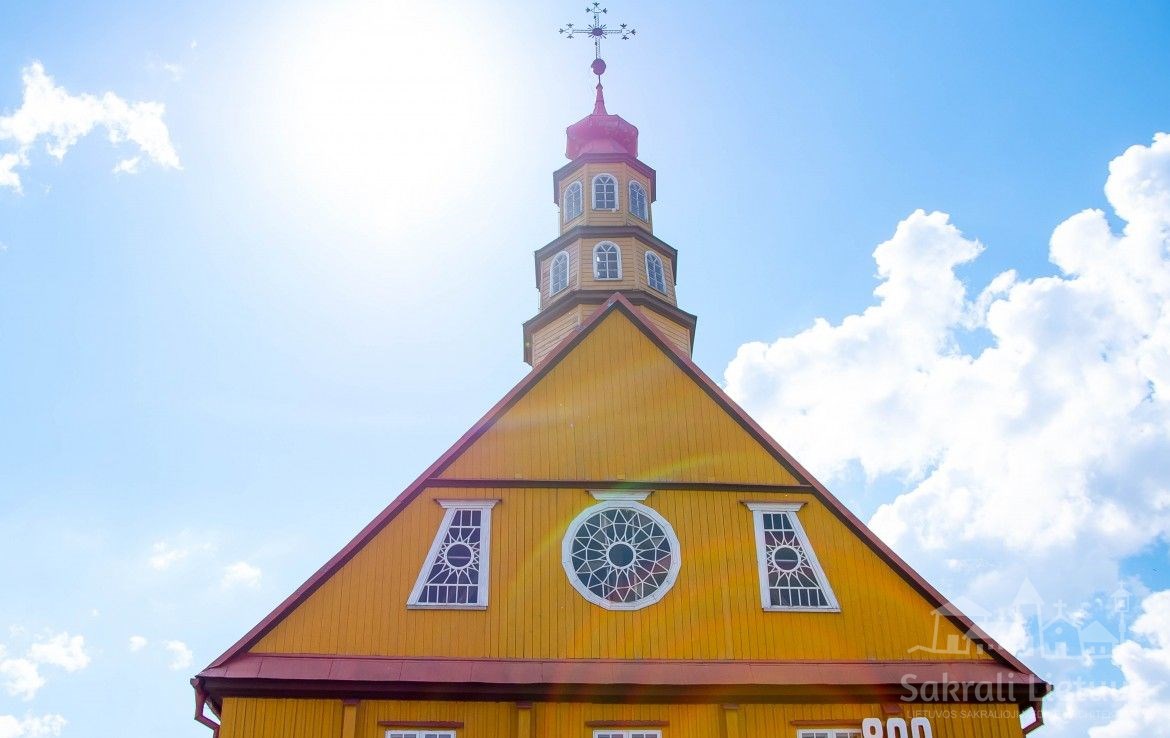 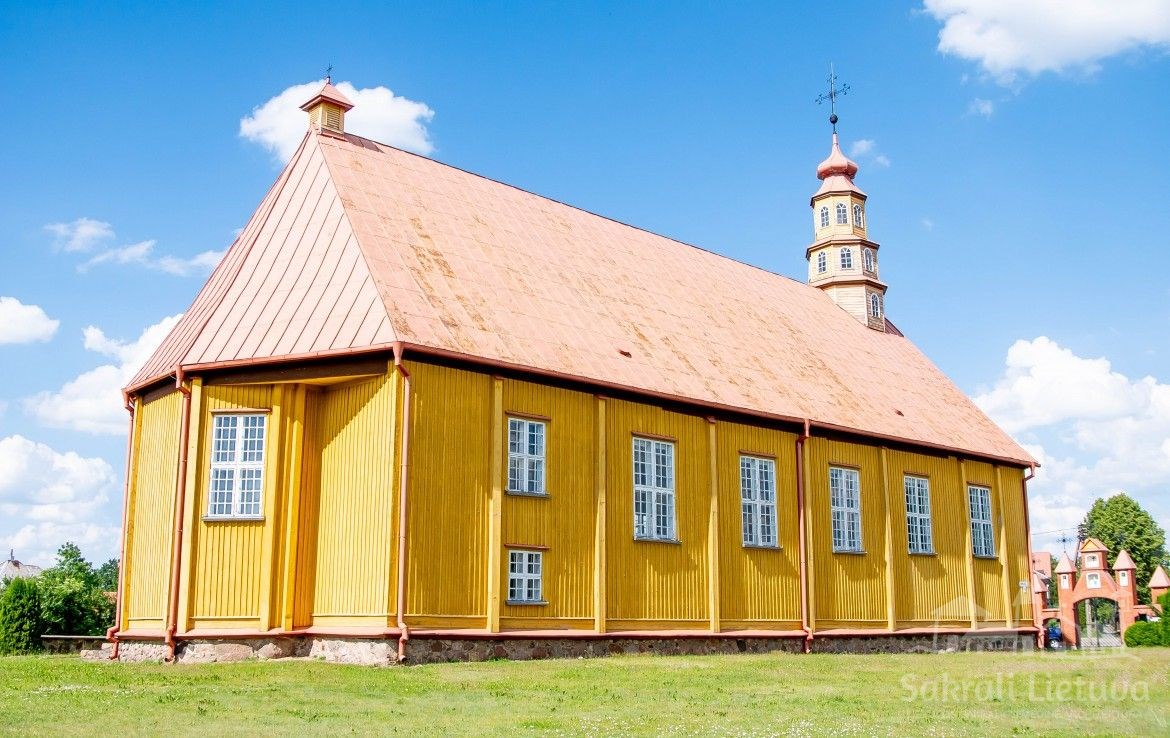 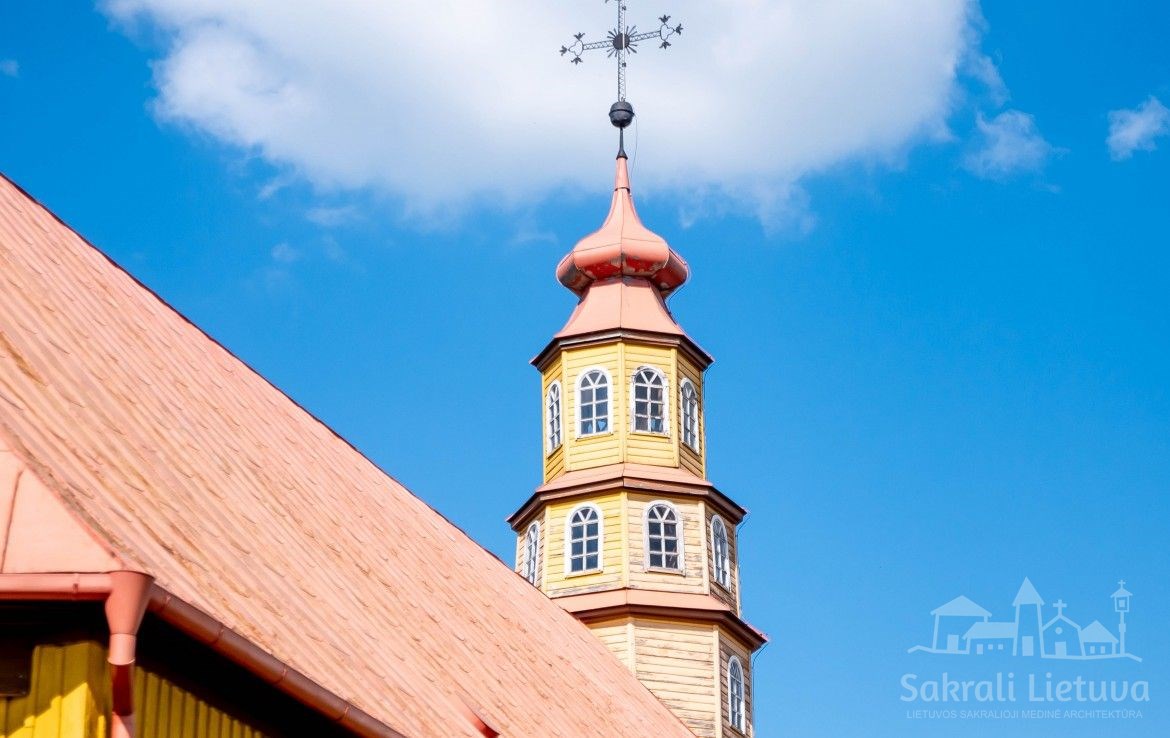 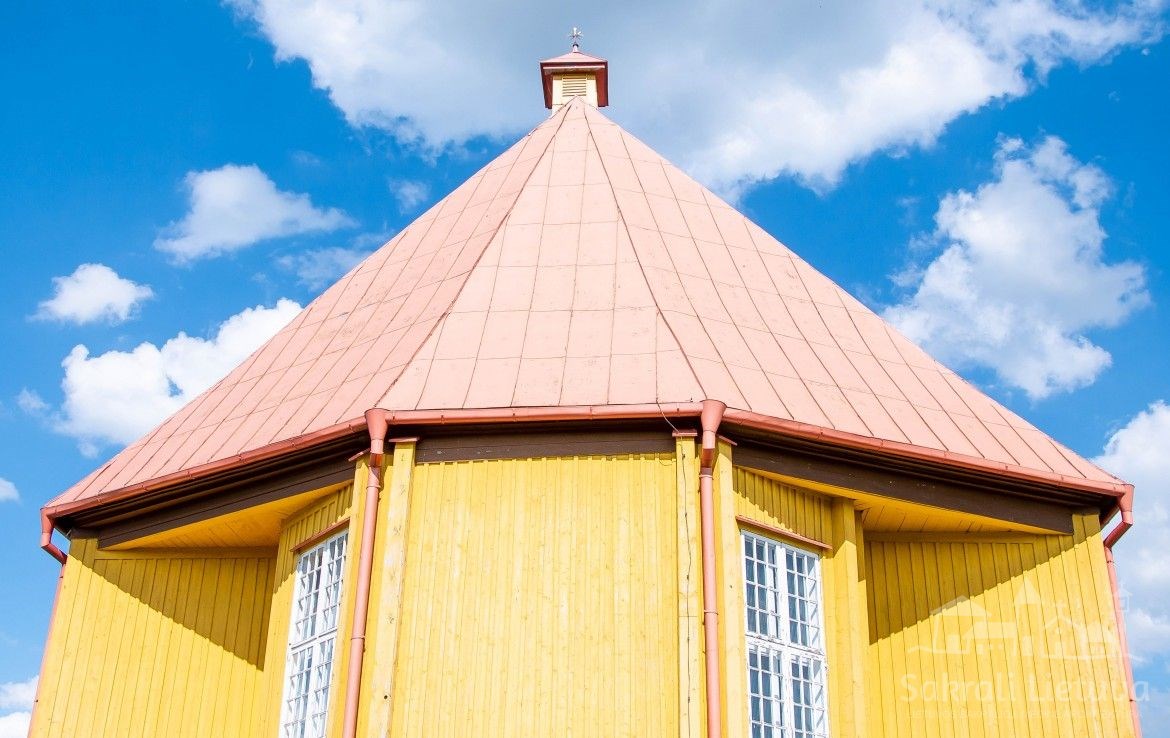 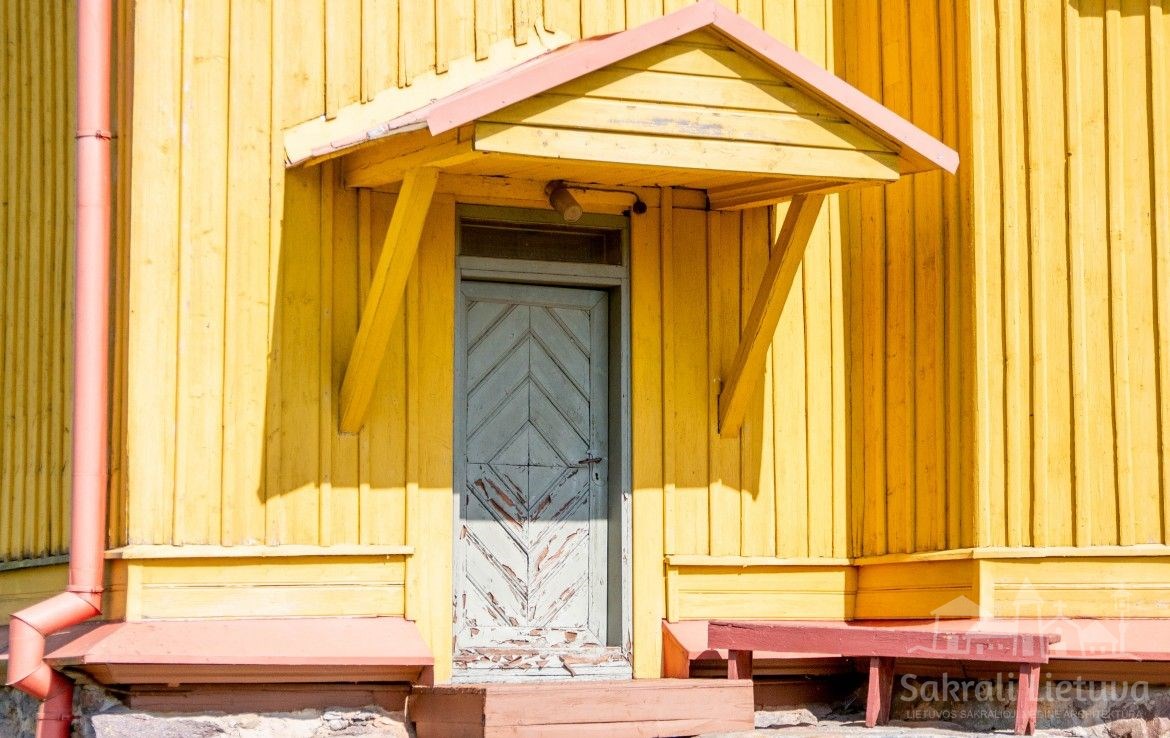 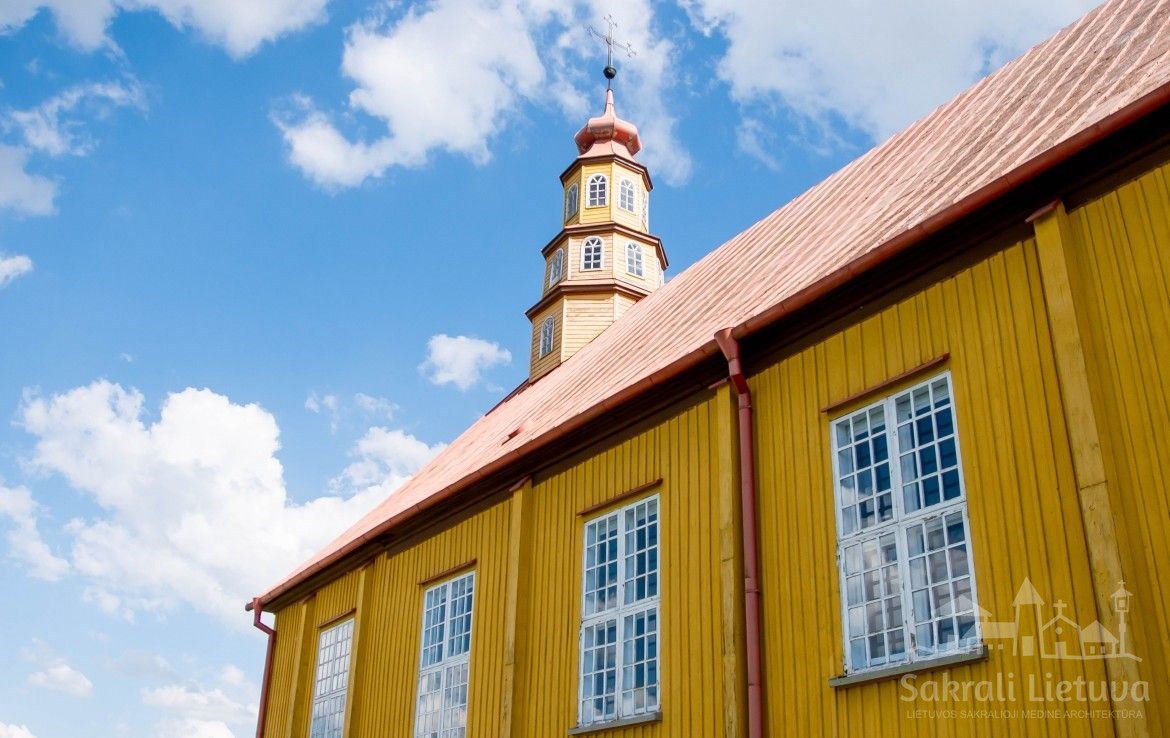 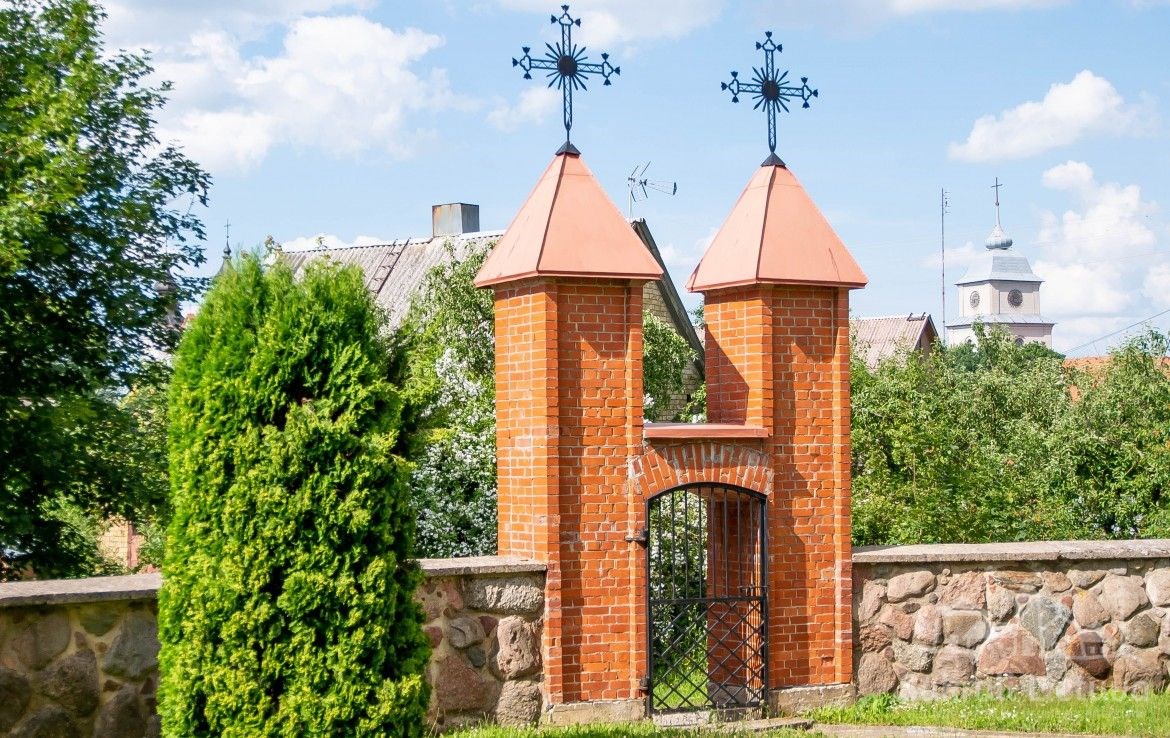 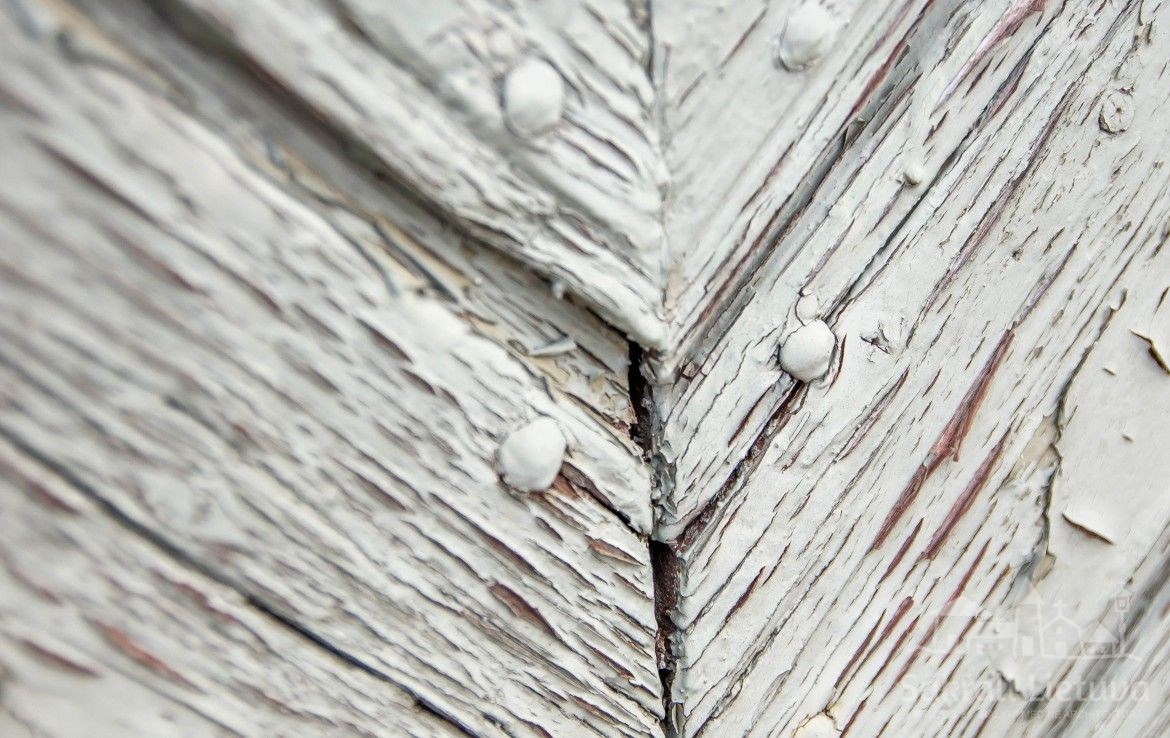 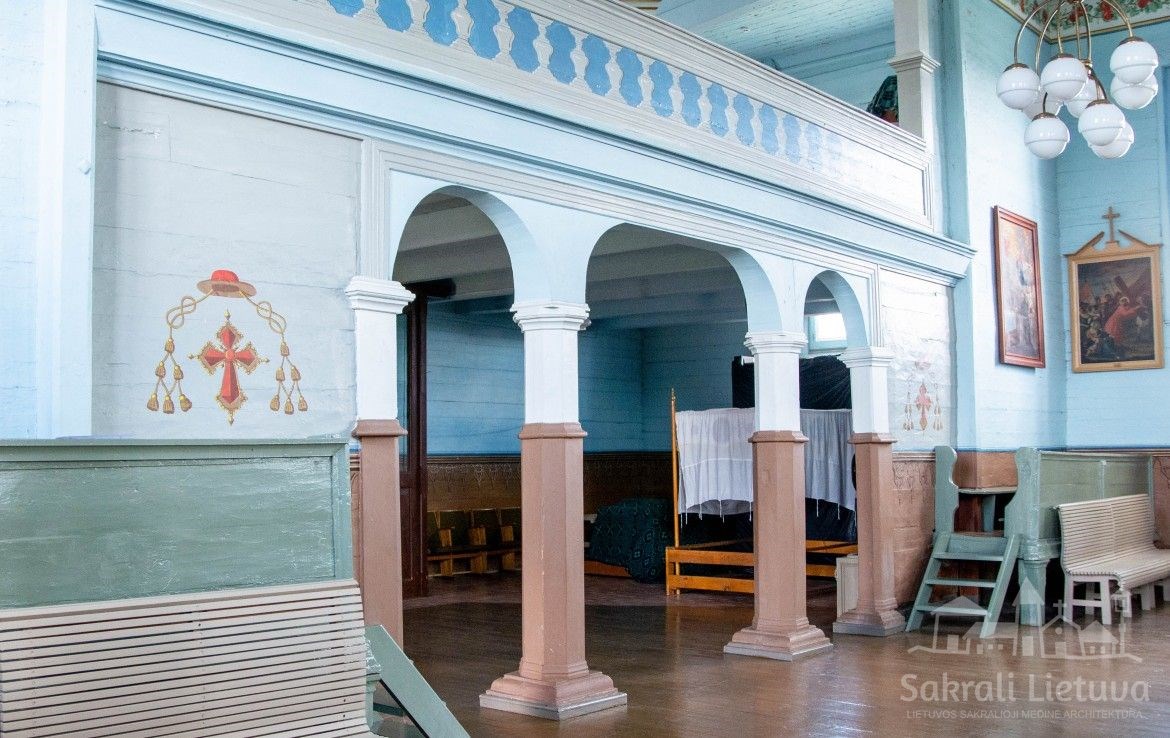 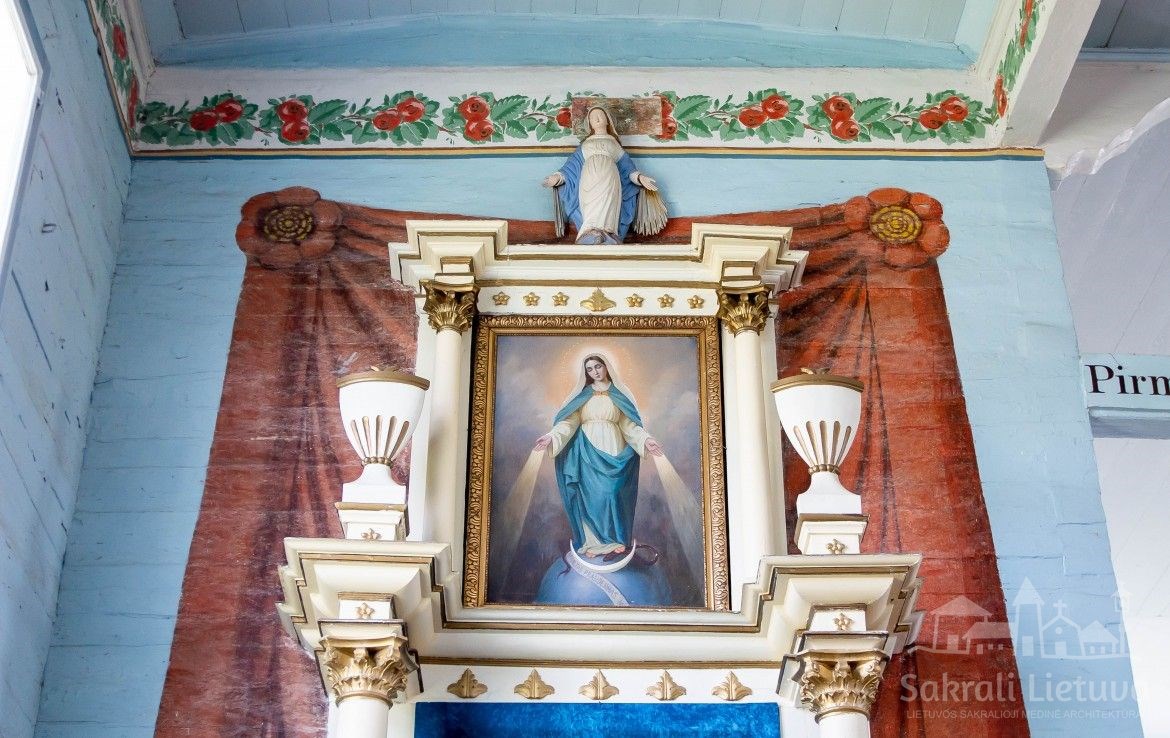 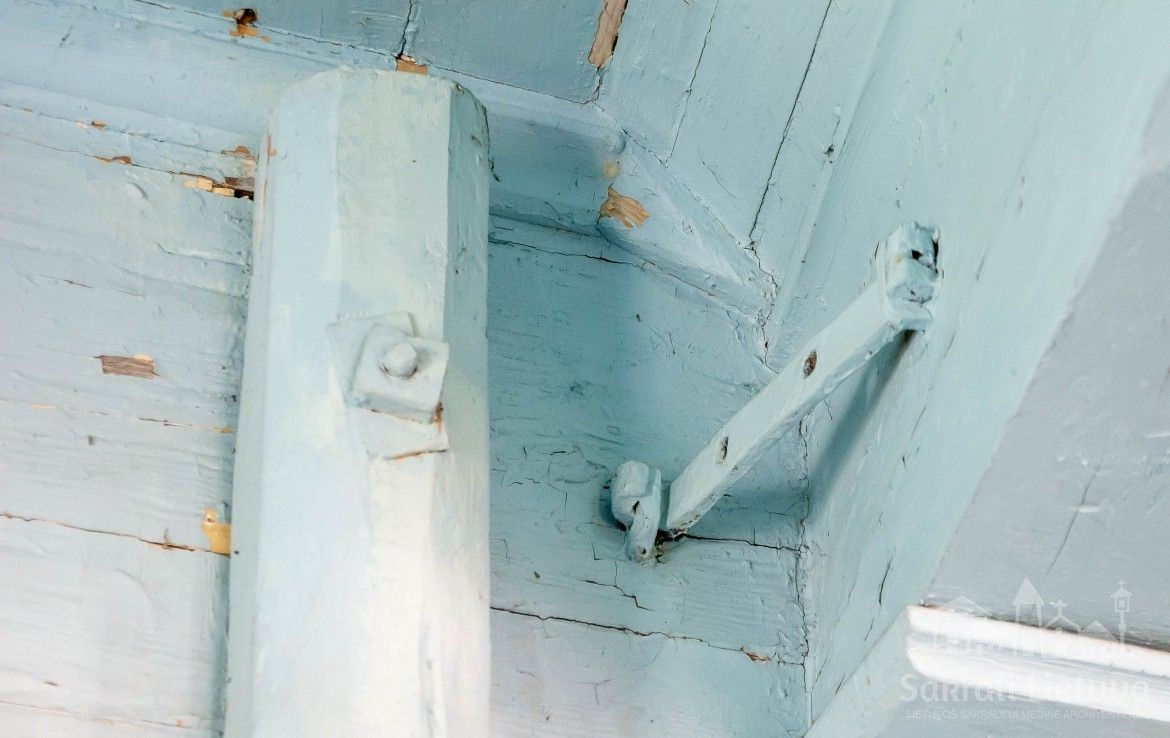 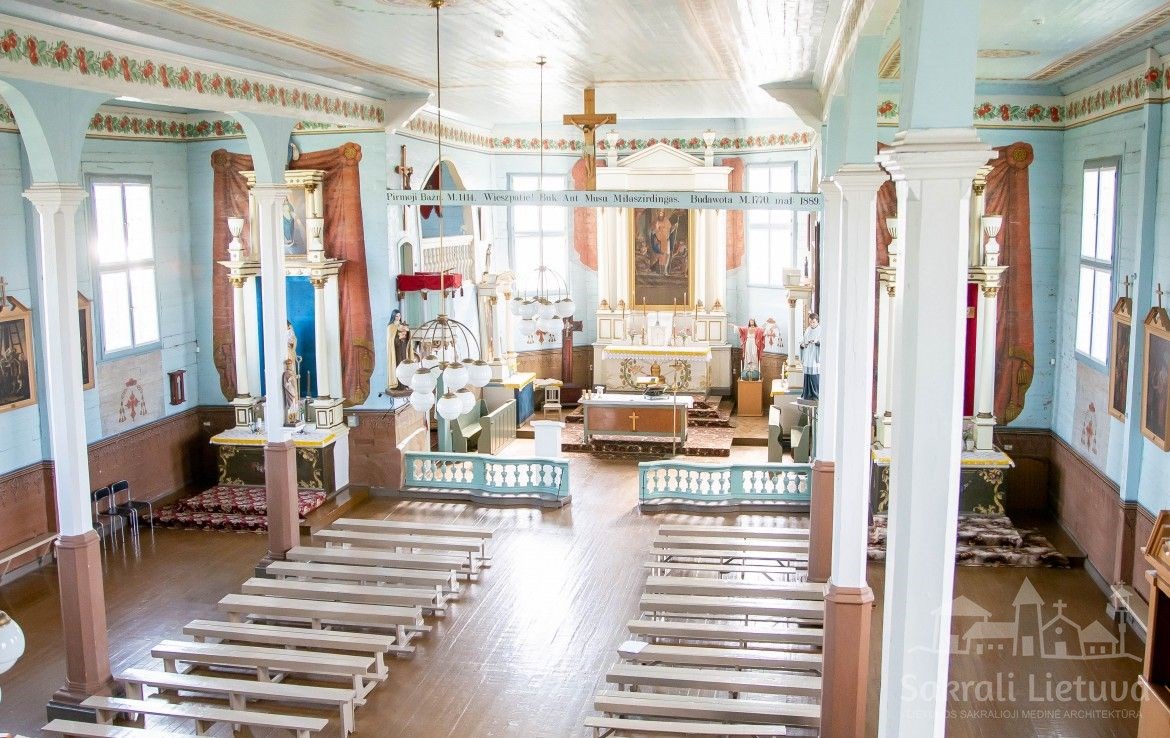 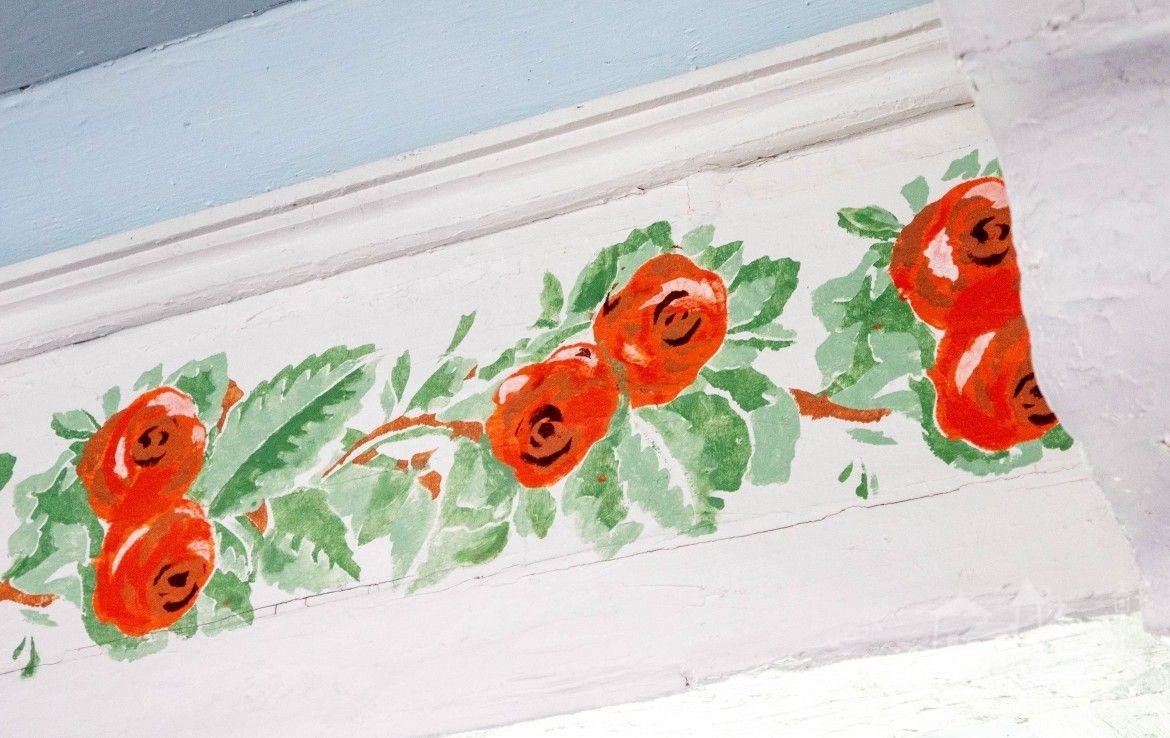 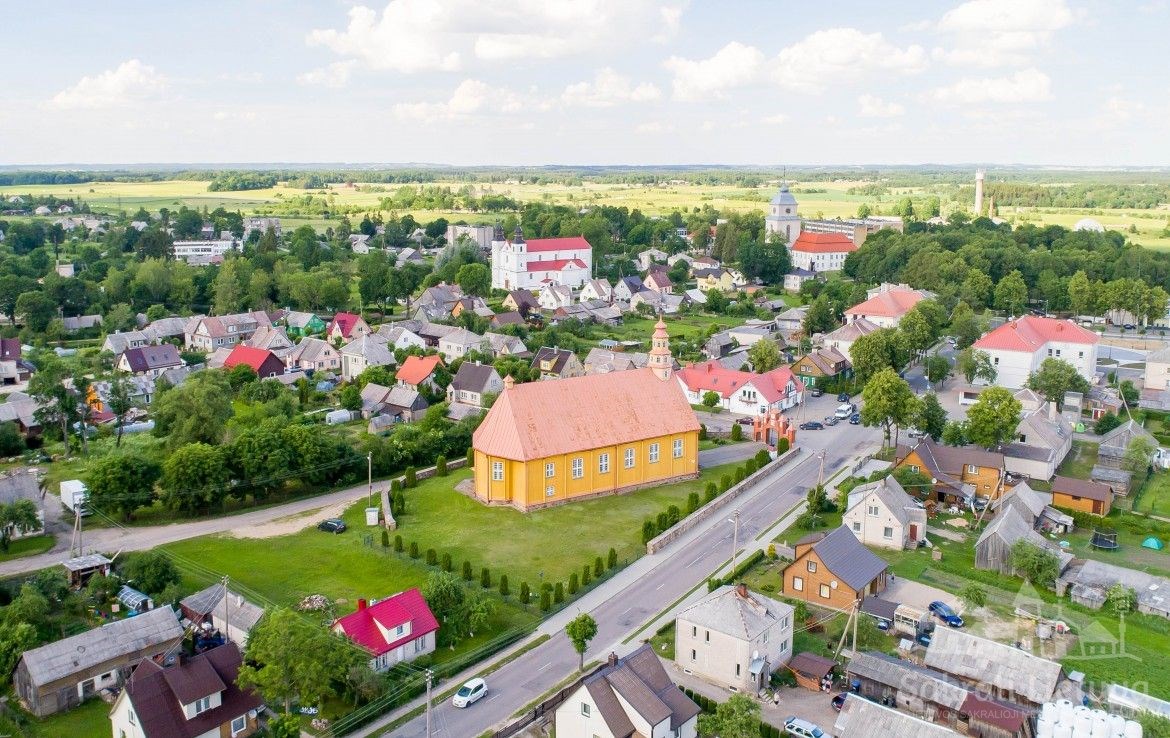 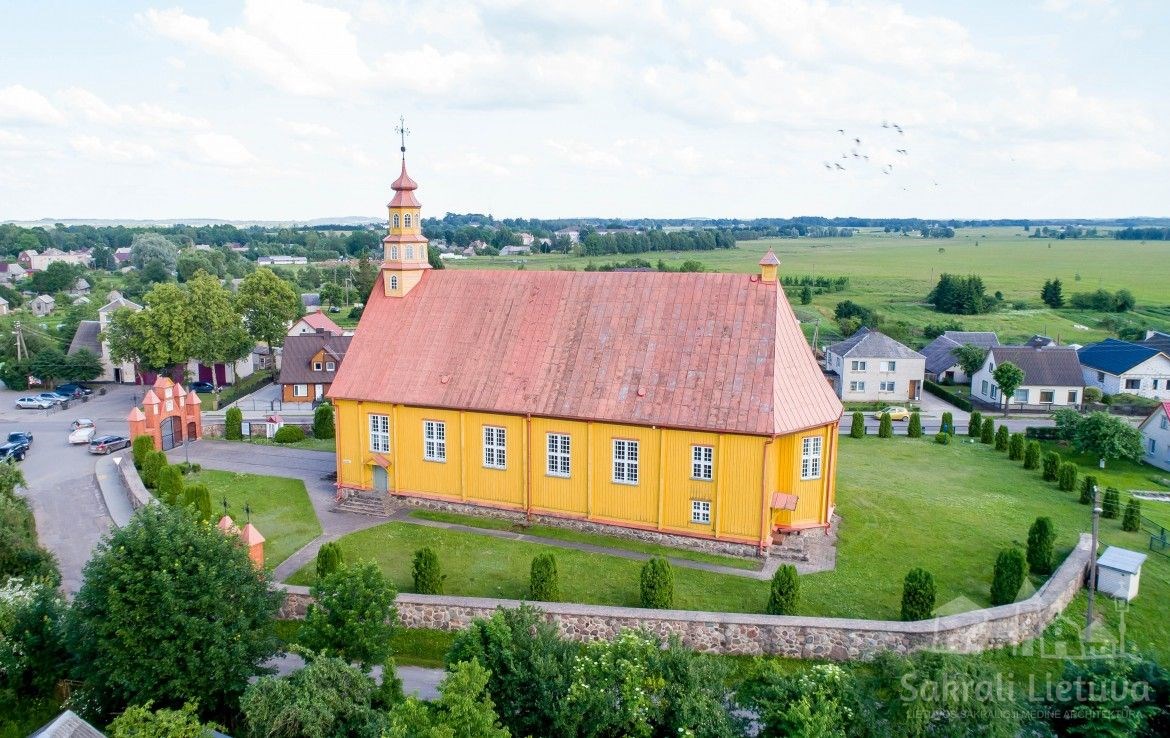