Šventežeris Church of the Birth of the Blessed Virgin Mary

Šventežeris creators and owners the dukes Radvilos were Calvinists, therefore, Trakai castellan Jurgis Radvila built in Šventežeris a wooden church of Calvinists in 1598. Under the conditions of Counter-Reformation times, a Dominican monk Stackevičius from Merkinė had organized Catholics from Šventežeris and in 1663 took up the church, which later was passed over to them. Šventežeris Manor owner built the second Catholic church in 1746. After it had fallen into decay, later even burnt down, in 1863, a project of a stone church building was approved, yet, construction was not launched. In 1880, a family chapel of 1822 of Šlavantai Manor owners was moved to Šventežeris, and, on the initiative of the priest Motiejus Bujauskas, was re-built into the present church. A sacristy, a tower and a portico were built next to the chapel. Over time, the church building being without any repair work done on it, got overgrown with moss and turned black. In 1998, the presbytery was reorganized in a more modern style , in 2002 – side altars repaired, alongside with the internal part, which was repainted.

Even at the times of tsarist occupation and The Lithuanian Press Ban, the vicar S. Čėsna took care about chanting in Lithuanian in Šventežeris. Before the First World War, and later during the inter-war period, the parish boasted educational activity: a library-reading facility was established, Žiburys organization division, a division of Temperance Society of Lithuanian Catholics and a Group of Pavasaris Organization Members were active here.

Šventežeris church is an original example of Historicism period in wooden architecture. The wooden building of the church consists of three, gradually decreasing in height, volumes, set up on a single axis. The composition of the building though unusual, still is symmetrical: it has the greater central nave of a rectangular plan, the side naves trapezoid-shaped and addition of sacristy, set up in the unusual place – behind the presbytery. The main facade of gracious proportions consists of a portico, propped by four hexagonal columns and having a triangular pediment, above which a two-tier tower rises. On both tiers of the tower, decorative arch-shaped acoustic openings are set up; the first tier ends with a tin-plated awning, the second one – with a hip helmet and a wrought ornamented cross. Decorativeness of the building is created through highlighting the structural and finish elements using different colours: timber corners, cornices, window trimmings, barge boards, which frame the upper part of the pediment. The windows of the building are rectangle-shaped with decorative division; a circle-shaped fanlight is integrated in the pediment, while in the side facades there are semi-circular fanlights.

The churchyard is fenced with a metal fence. It contains a small, single-tier belfry of minimalistic structure and uniform volume. Next to it – an ornate wooden cross, decorated in a style, characteristic of Dzūkija region. 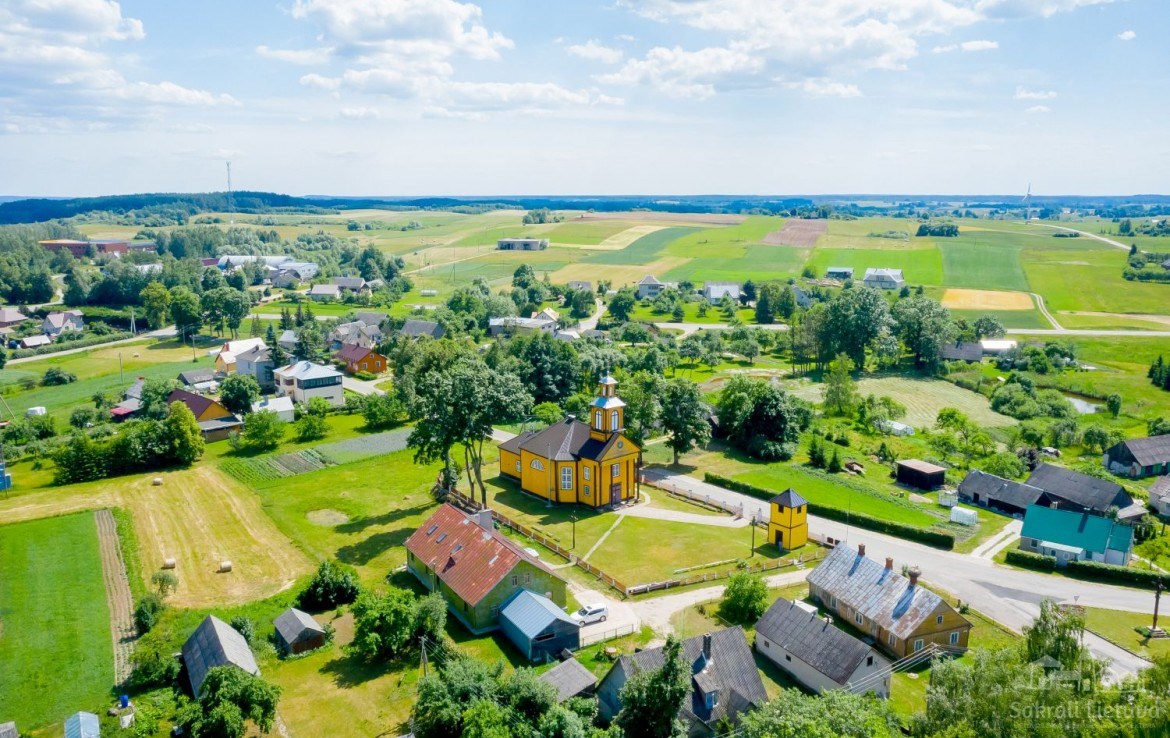 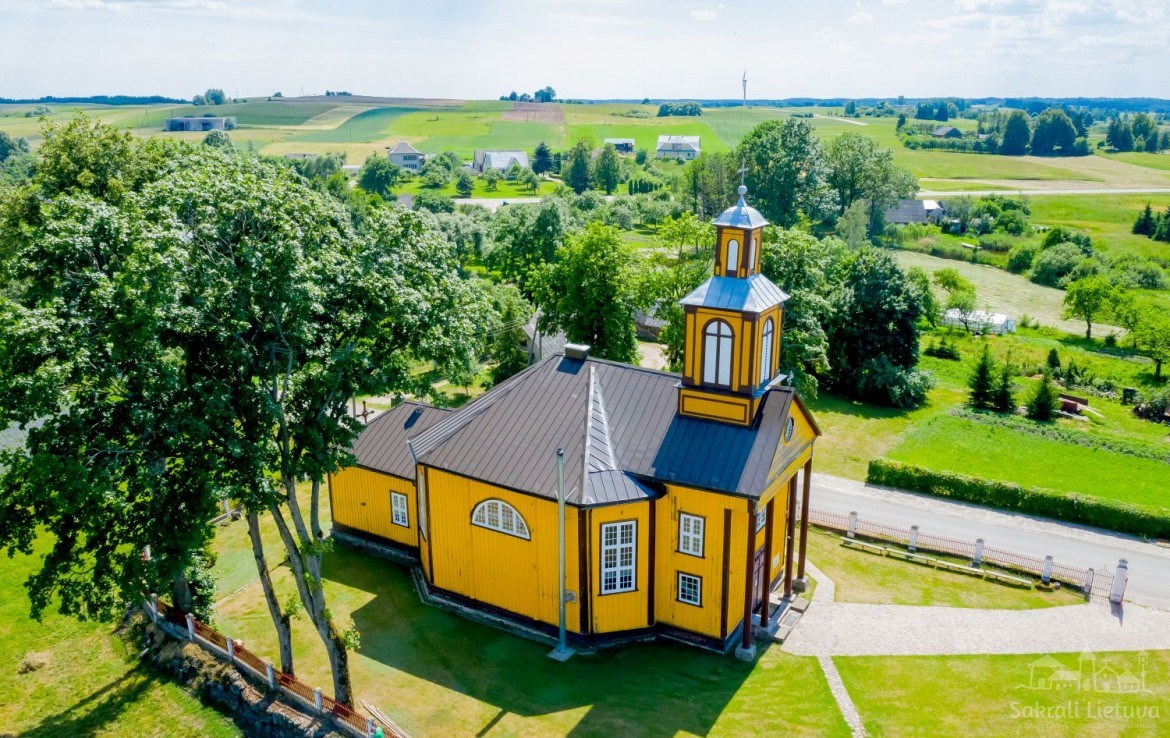 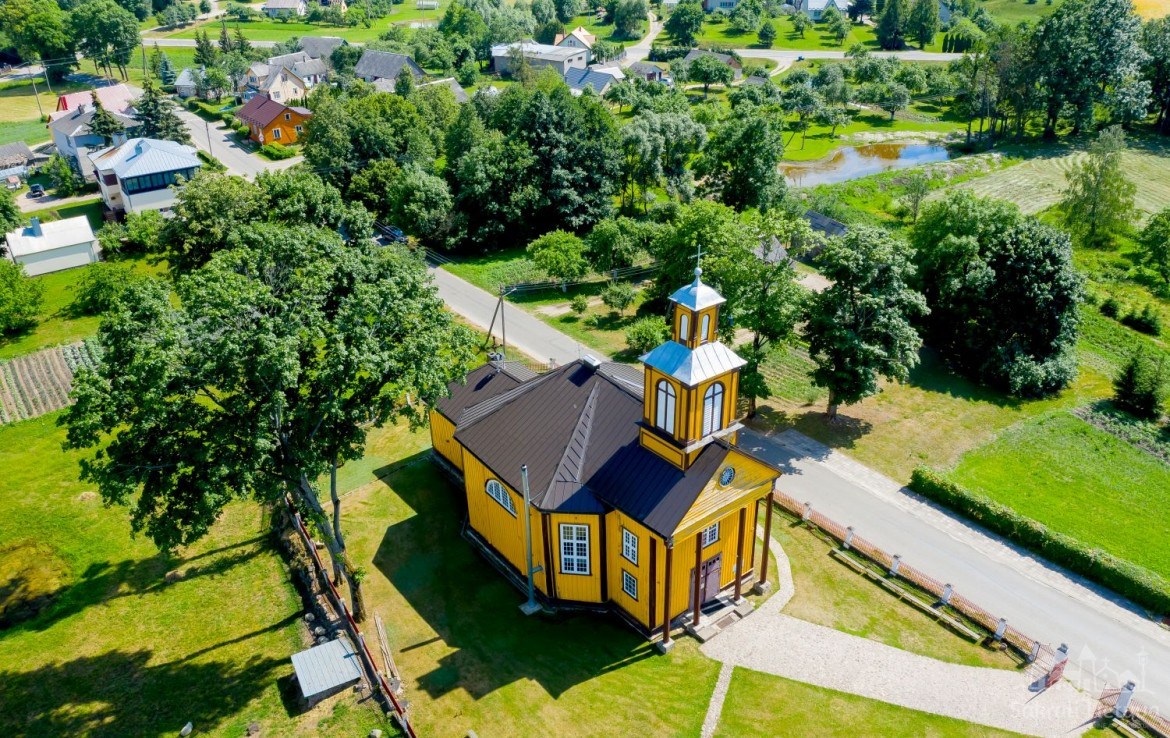 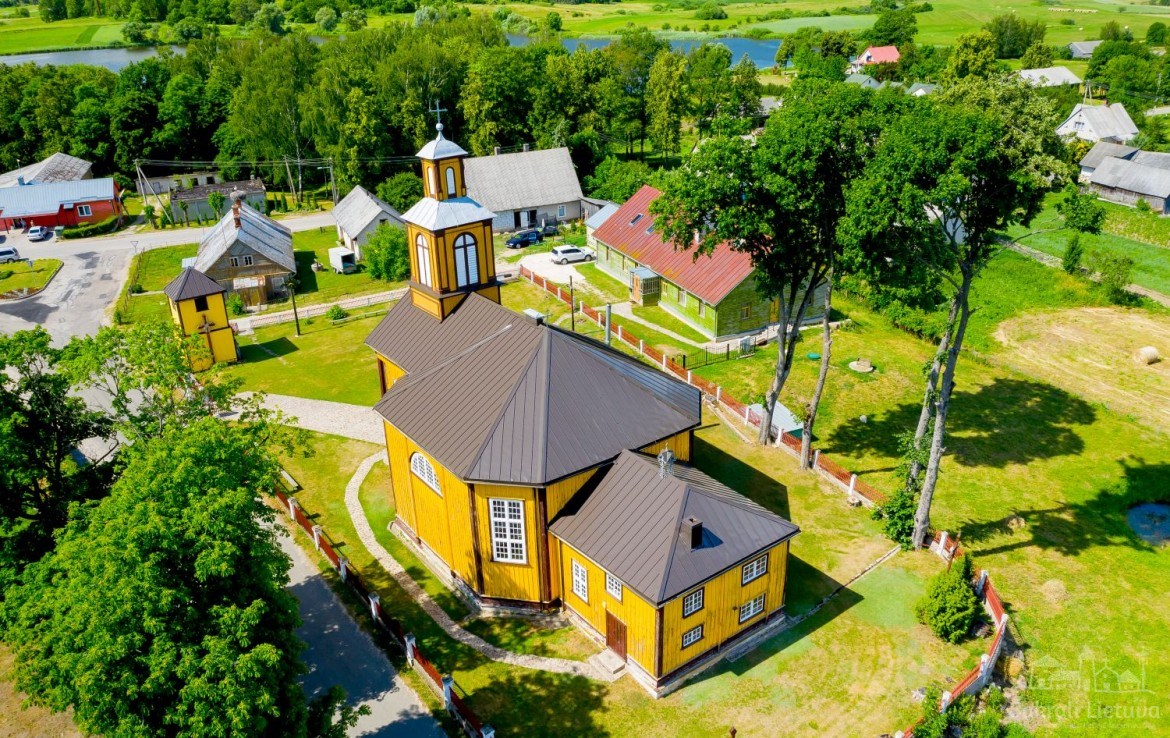 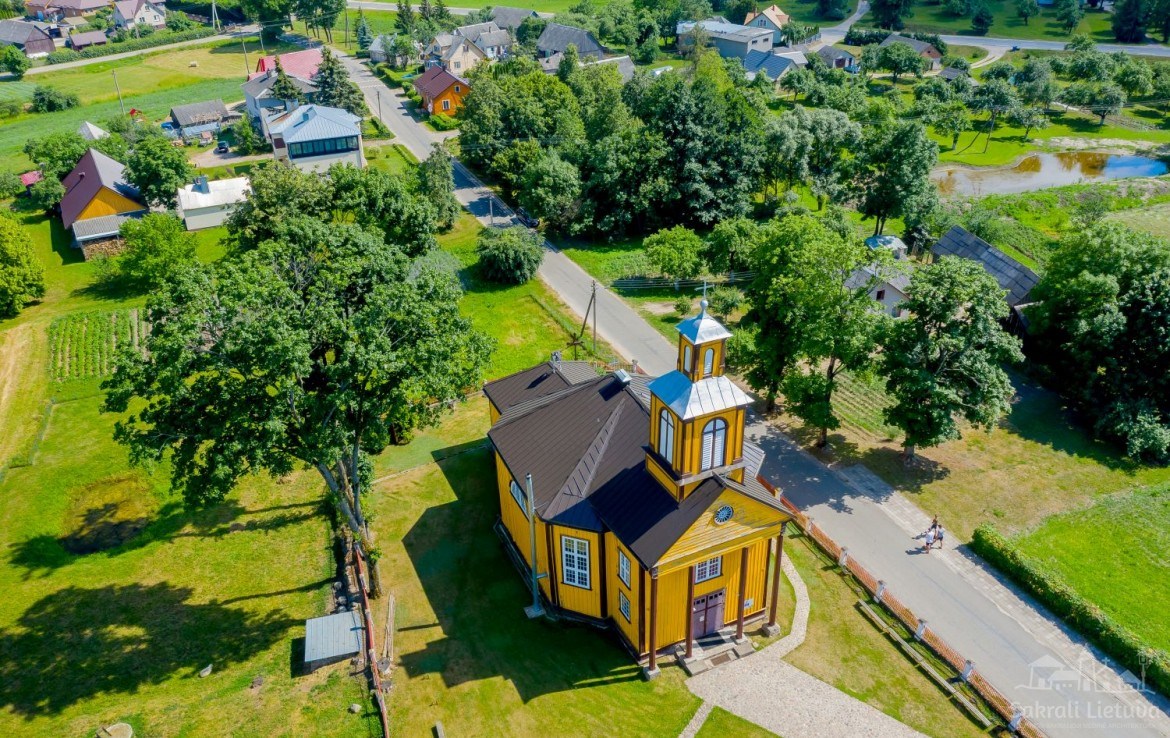 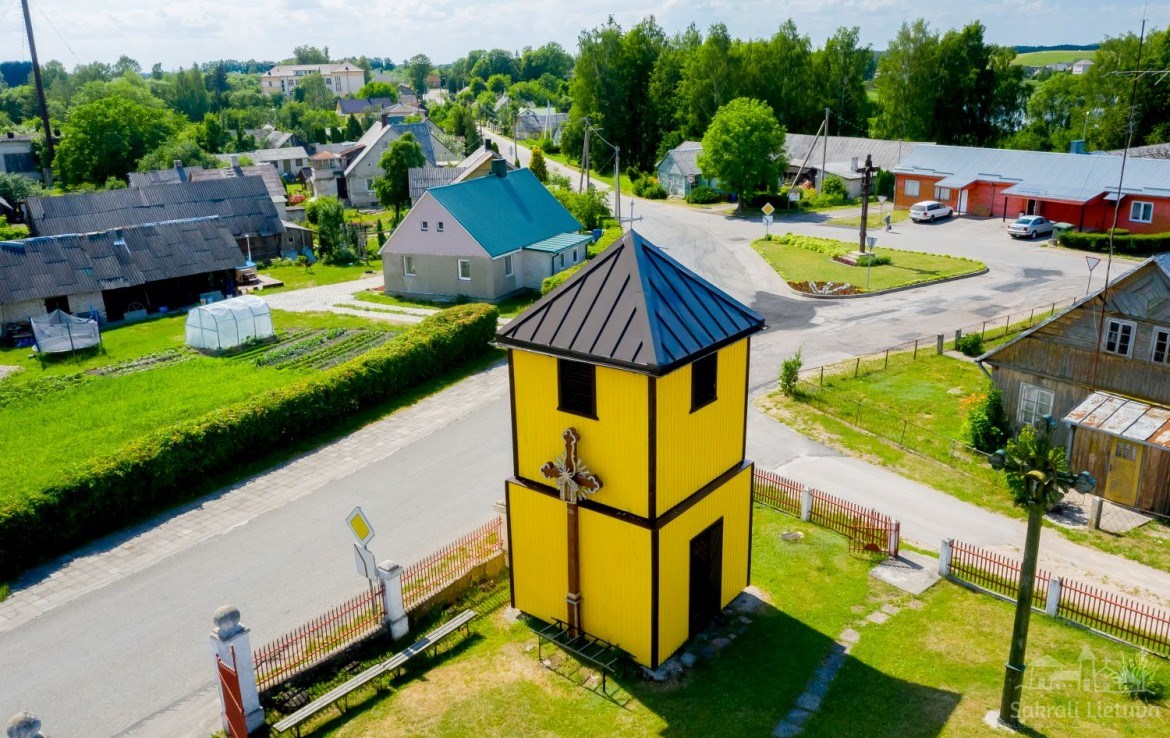 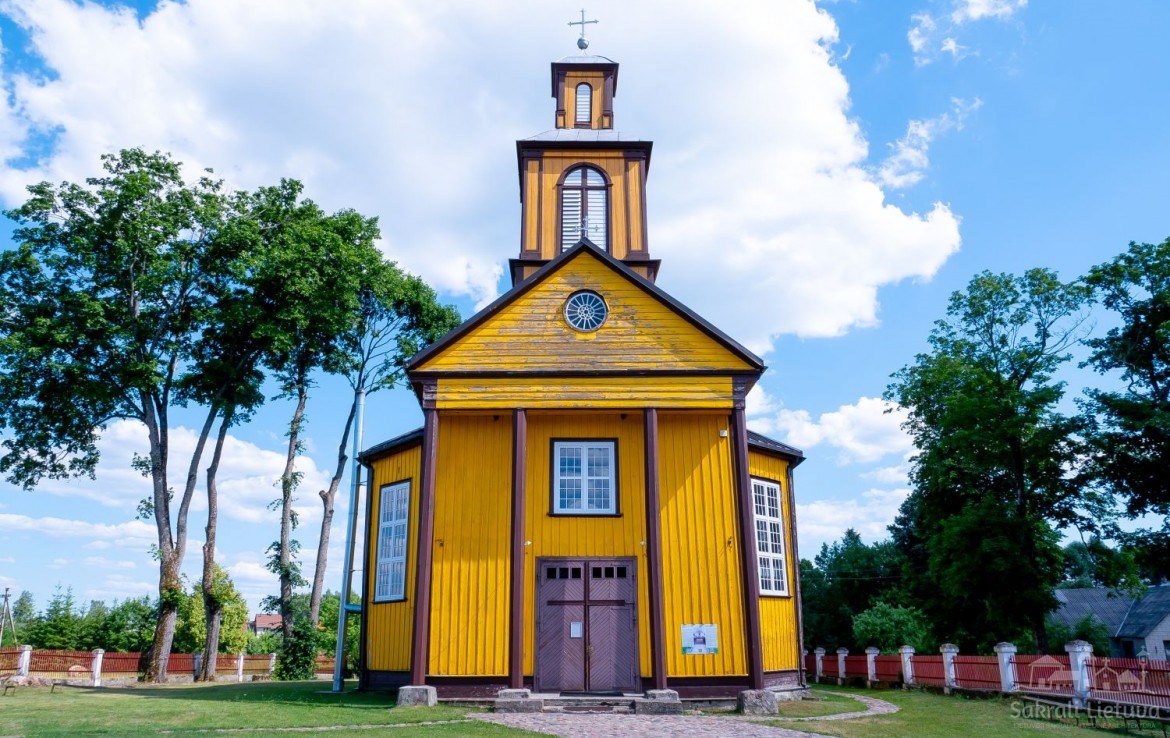 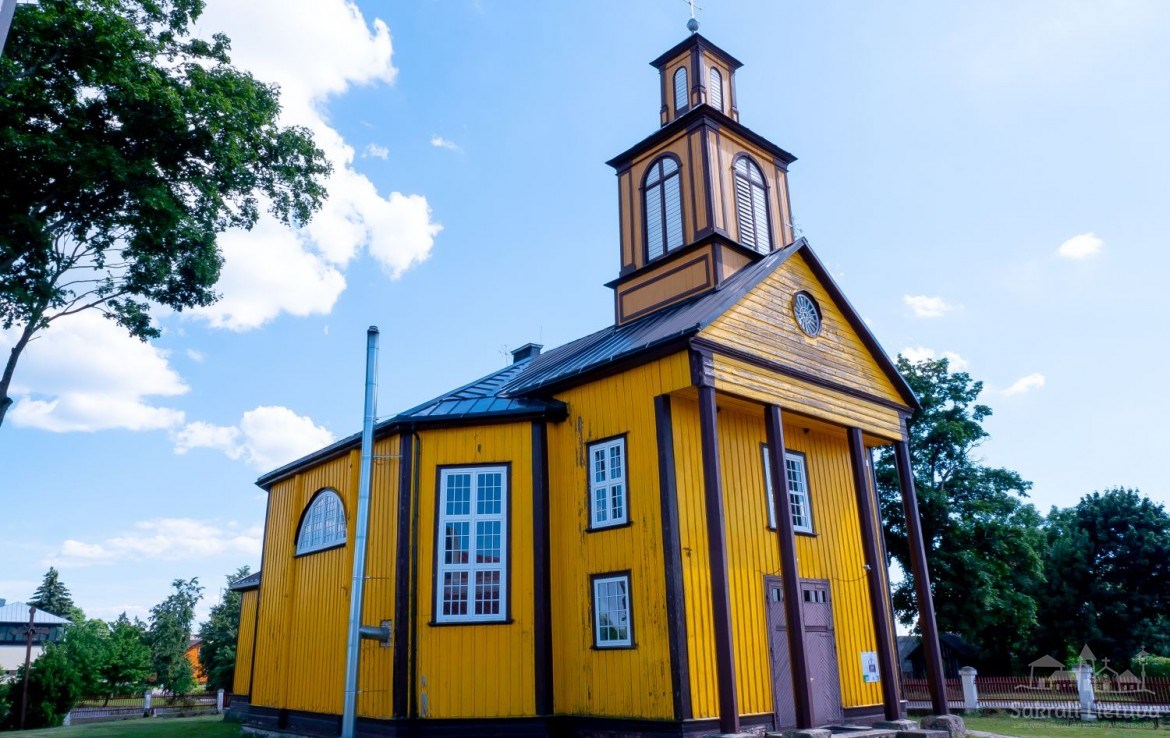 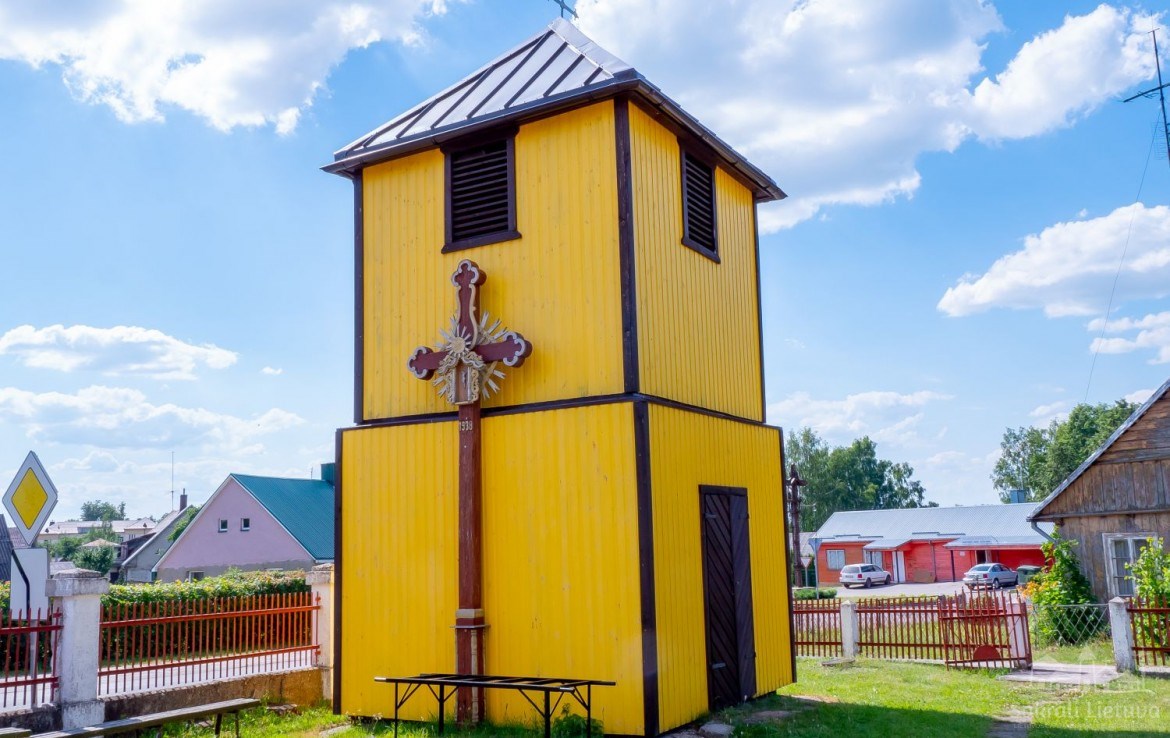 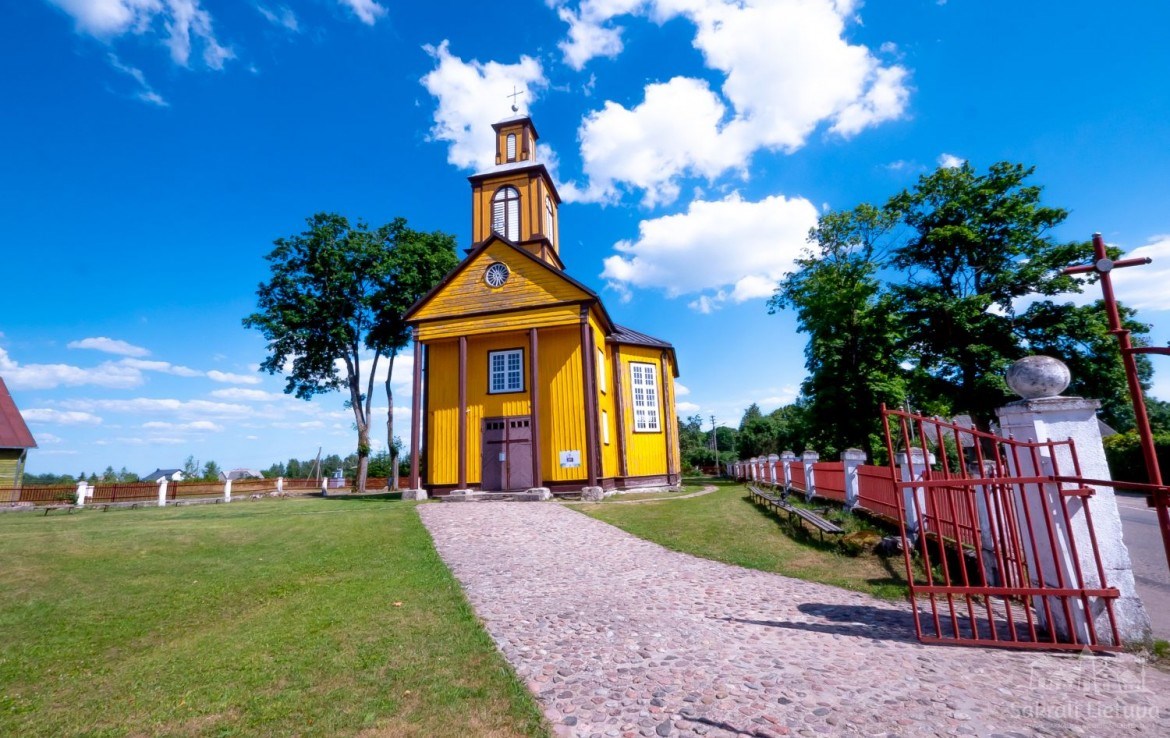 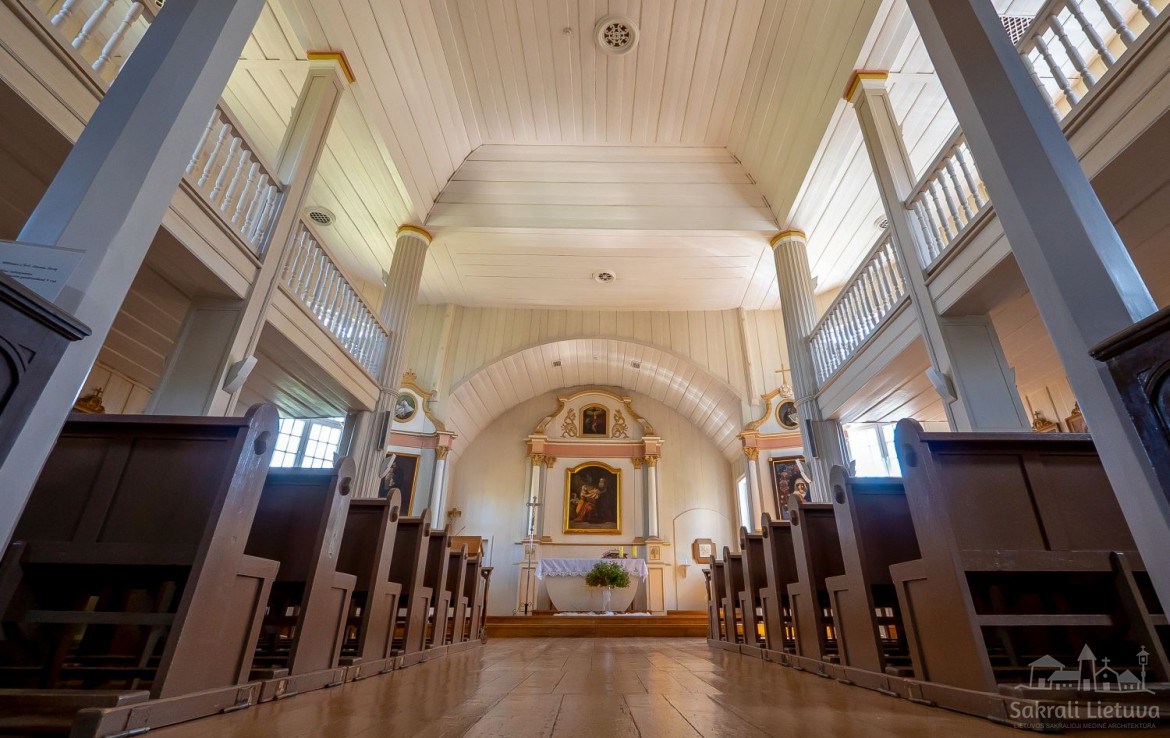 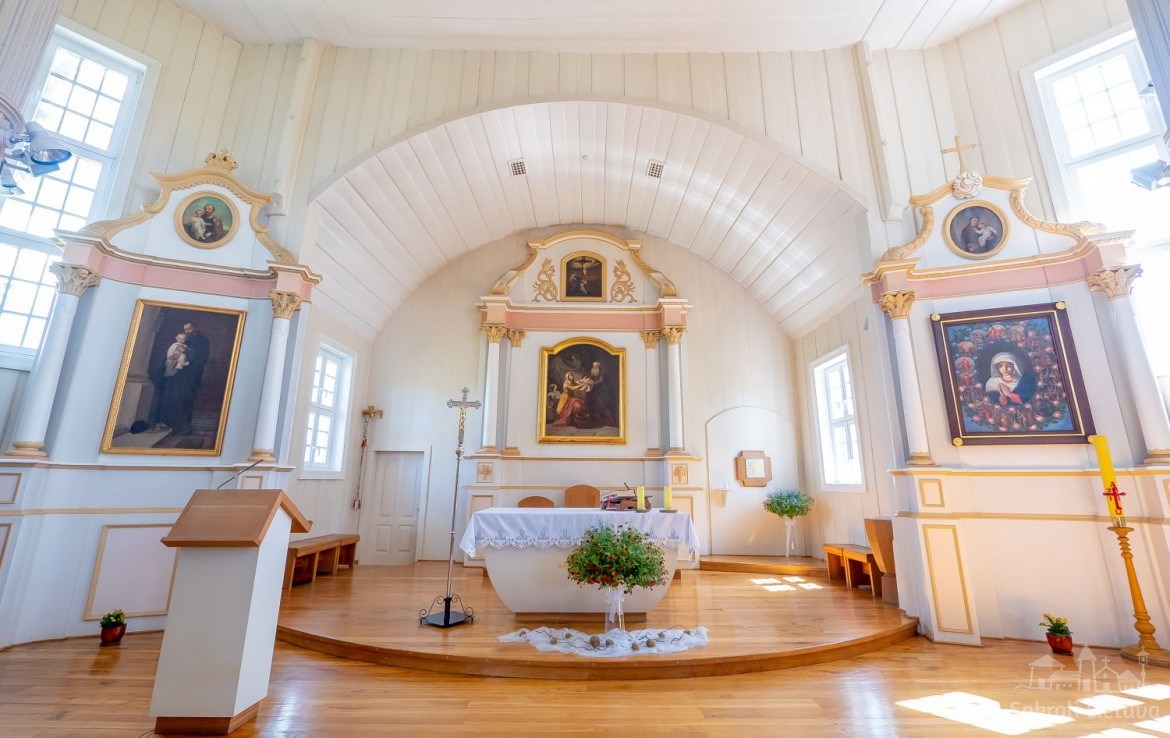 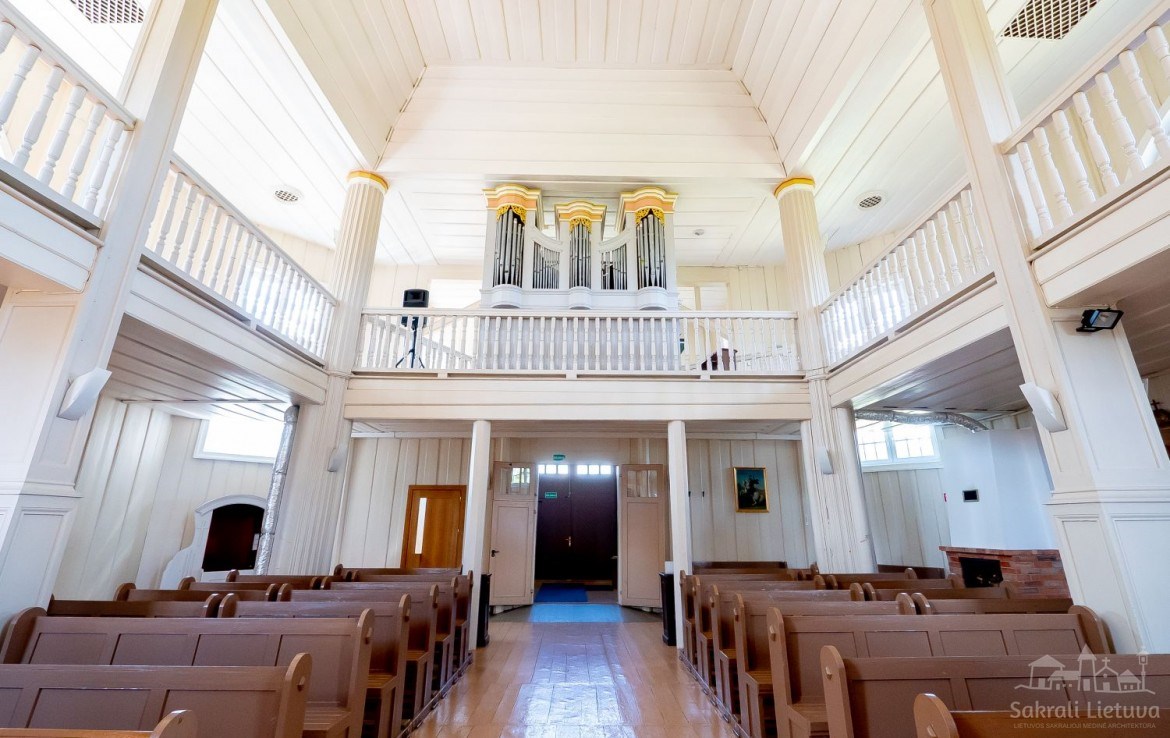 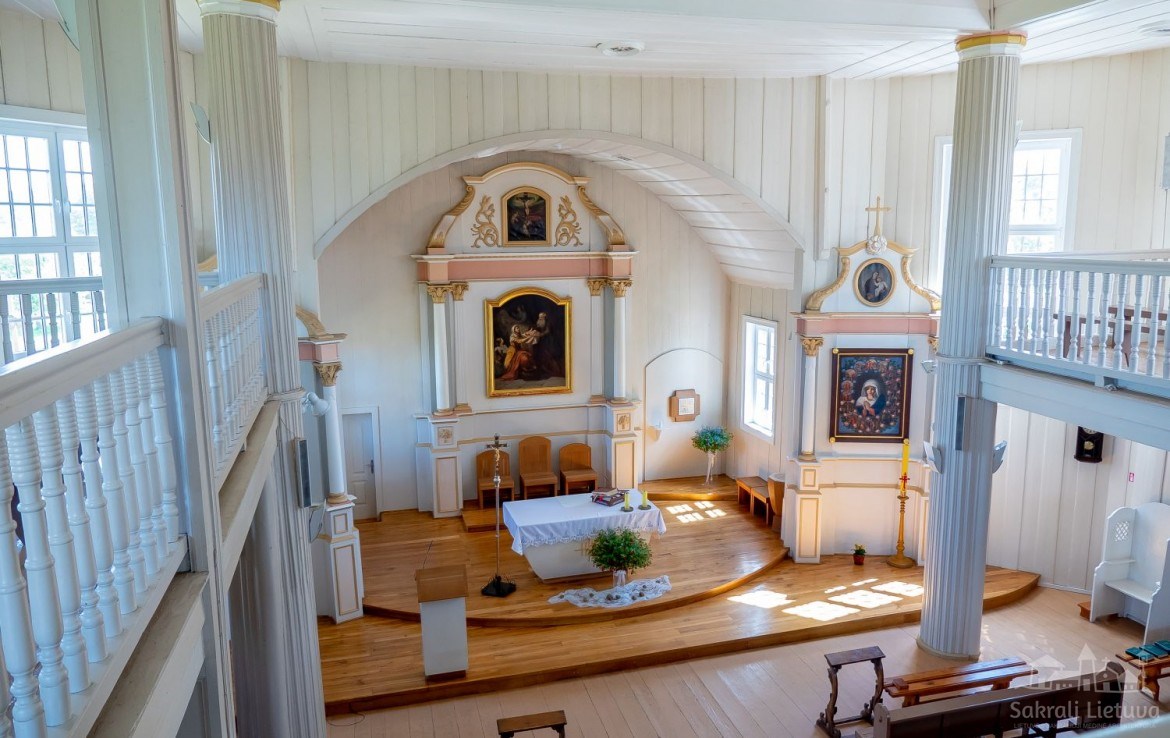