Next to the famous Stelmužė oak, one of the oldest wooden churches, survived into our days, stands. Its construction was launched even in 1613 by Livonia noblemen the Felkerzambai family, who at the time were the owners of Stelmužė Manor. Inside the church, there is a small shield with a relief type coat-of-arms of the Felkerzambai family, while in the sepulchres, bricked out under the church, Stelmužė Manor owners were buried. There is a legend too, concerning emergence of Stelmužė church. According to this story, a serf was caught escaping from the manor. He tried to justify his escape by absence of any church in the vicinity, as he had not an opportunity to perform penance.

In the beginning, Stelmužė church belonged to the Calvinists like Alūksta (at present territory of Latvia) parish filial and just since 1808 it has become a Catholic church. In 1713, on the initiative of the same family, who provided funds for the construction of the church, repair works were done on the building and interior restored. Later, a huge reconstruction of the church was performed in 1880, while in the Soviet times, this church was converted into the Museum of Folk Sculptures, and further on – the Museum of Church Art. Services are hold here since 1997.

The building of the church – a folk architecture object with Classicism features. Quite a small church has a rectangular plan, simple forms, single nave, three-walled apse and sacristy addition. The church has no tower, its roof is double pitched. The most sumptuous element of the exterior which emphasizes the function of the exclusive building of sacred architecture – a portico of twelve slender columns, adorning the main facade. An unusual architectural solution was adapted here, the one which is rarely met in Lithuania – the columns surround the narthex on three sides. The planes of the side facades are divided by rectangular windows with the upper corners cut. Like all other old churches, it was built using just an axe – to join the squared timber, no nail was hammered.
The internal space of the church is very simple and minimalistic. The nave is separated from the presbytery by a transverse beam, while the organ choir – by a small fence of carved boards. The altar and the pulpit of Baroque style stand out by unique wood carvings. In the composition of the altar, sculptural decor dominates: it holds The Group of Crucifixion with relief figures of four evangelists, lots of floral motifs, small winding columns and ornamentation. A multi-angular pulpit is hoisted on a pole, adorned with rich carving ornamentation, imitating a palm stem, having bass-reliefs of twelve apostles and carvings of floral motifs. The canopy is adorned with the figures of angels, holding tools for Christ torturing. Apparently, this valuable ensemble was created in 1713 by craftsmen from Ventspilis.

In the churchyard, a wooden belfry of mid-17th century stands, it has an open gallery and bells, cast in 1613. 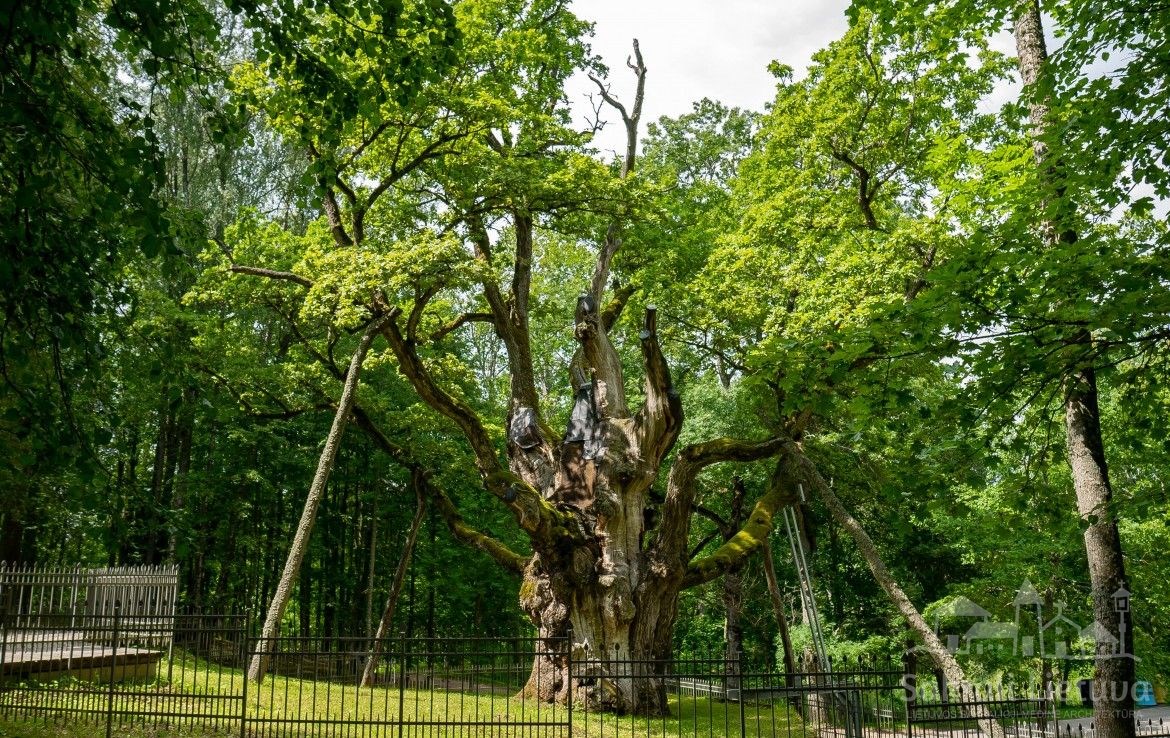 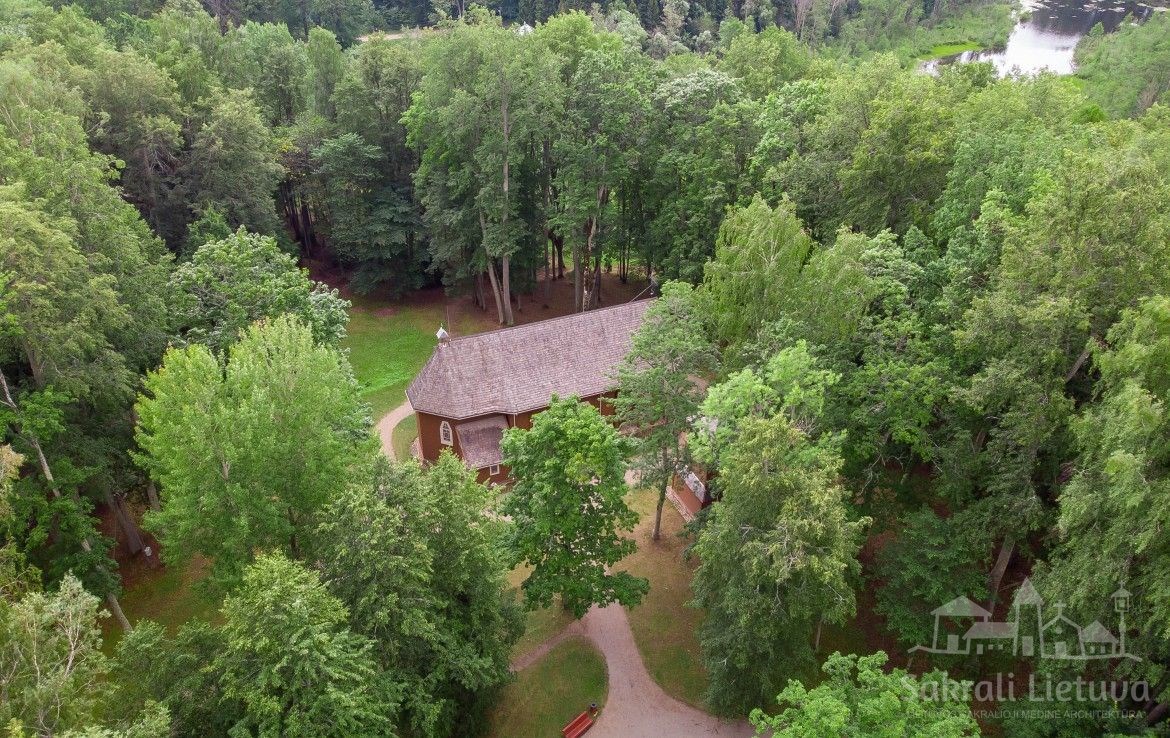 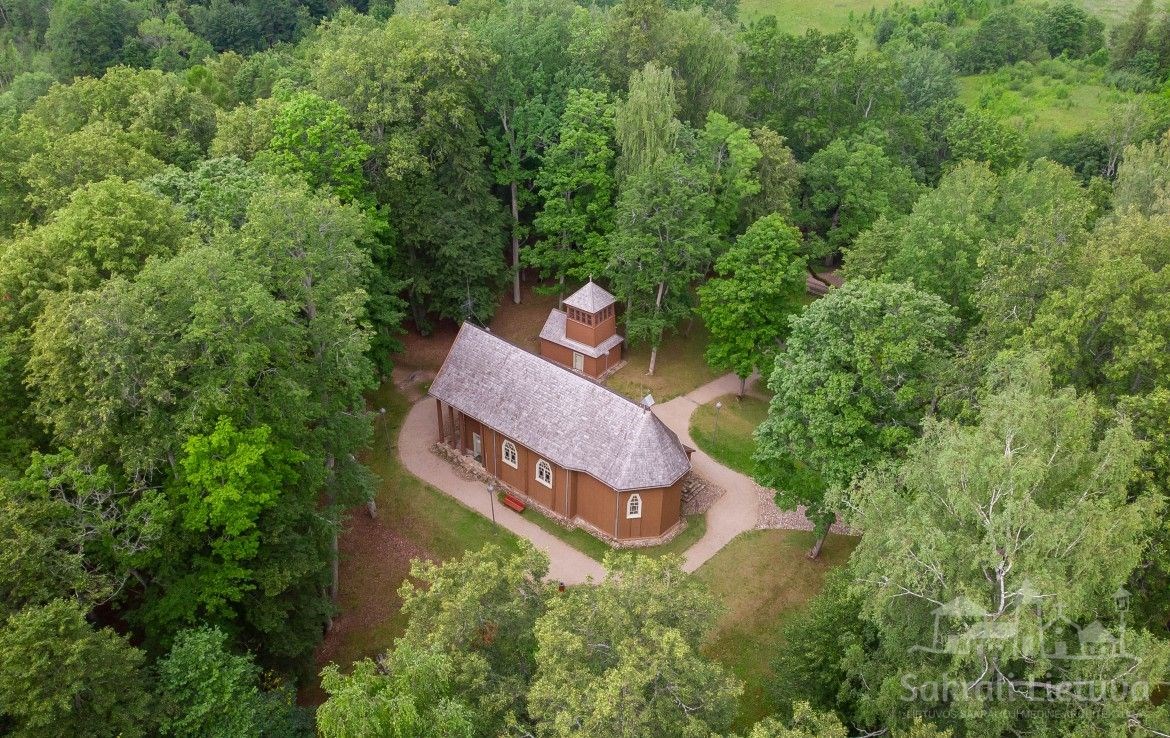 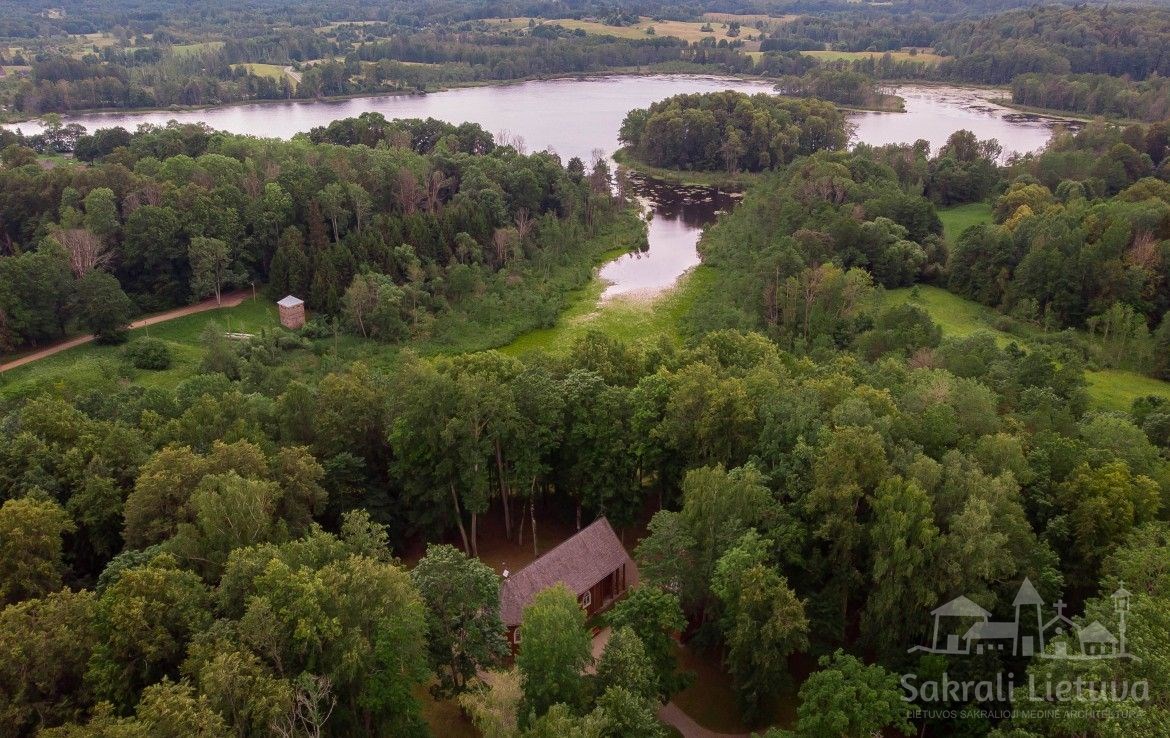 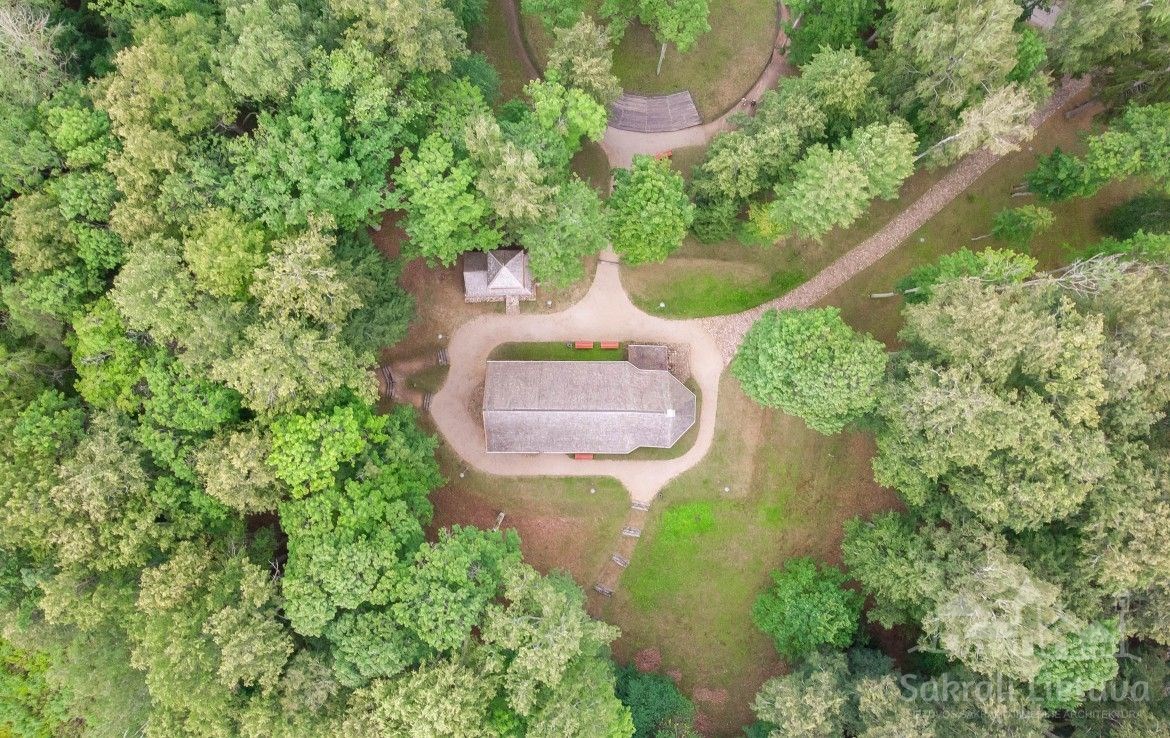 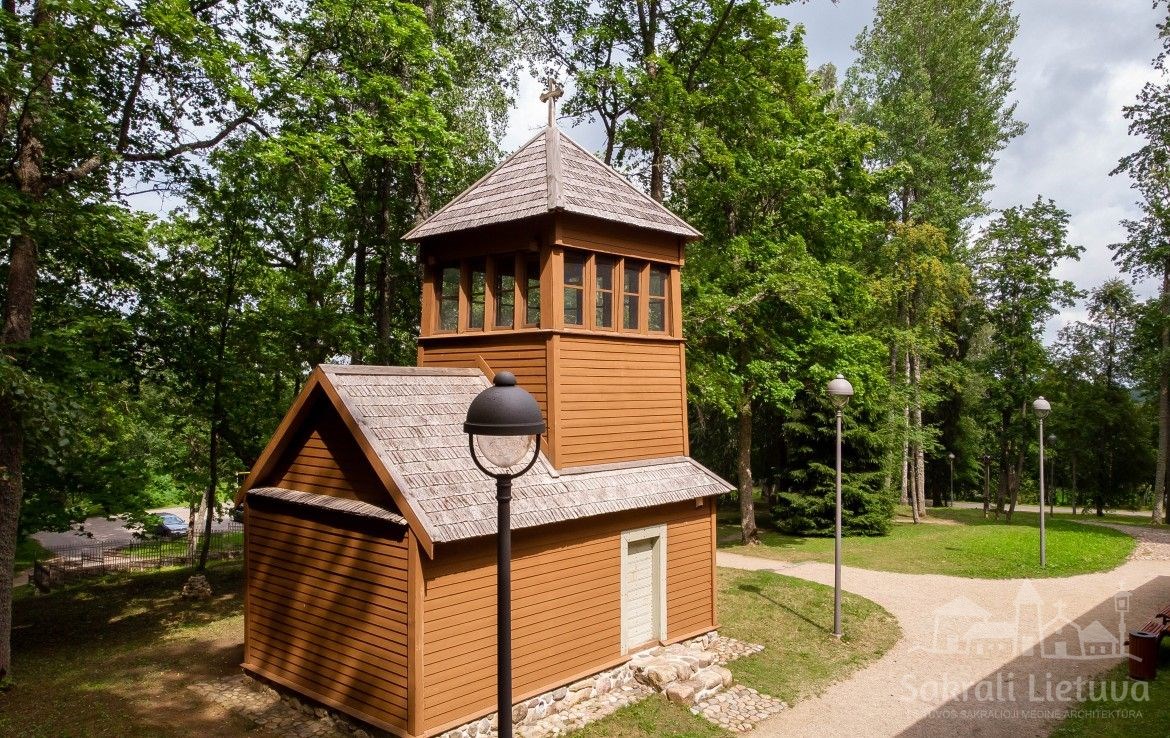 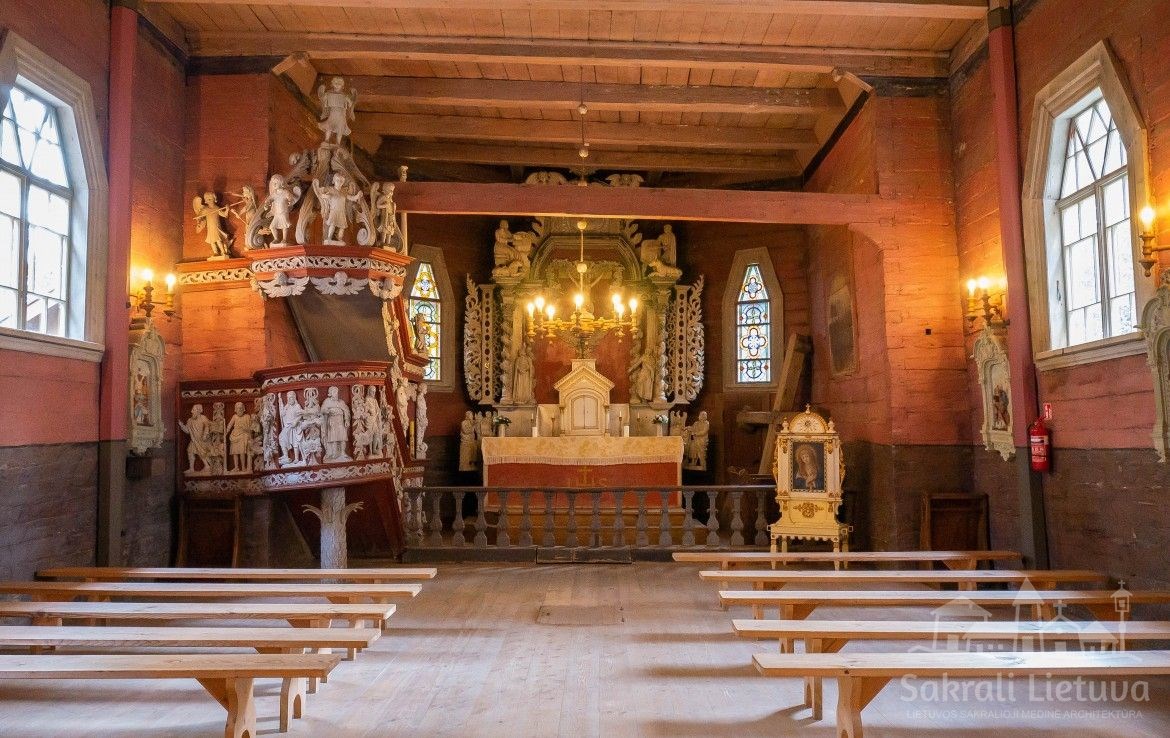 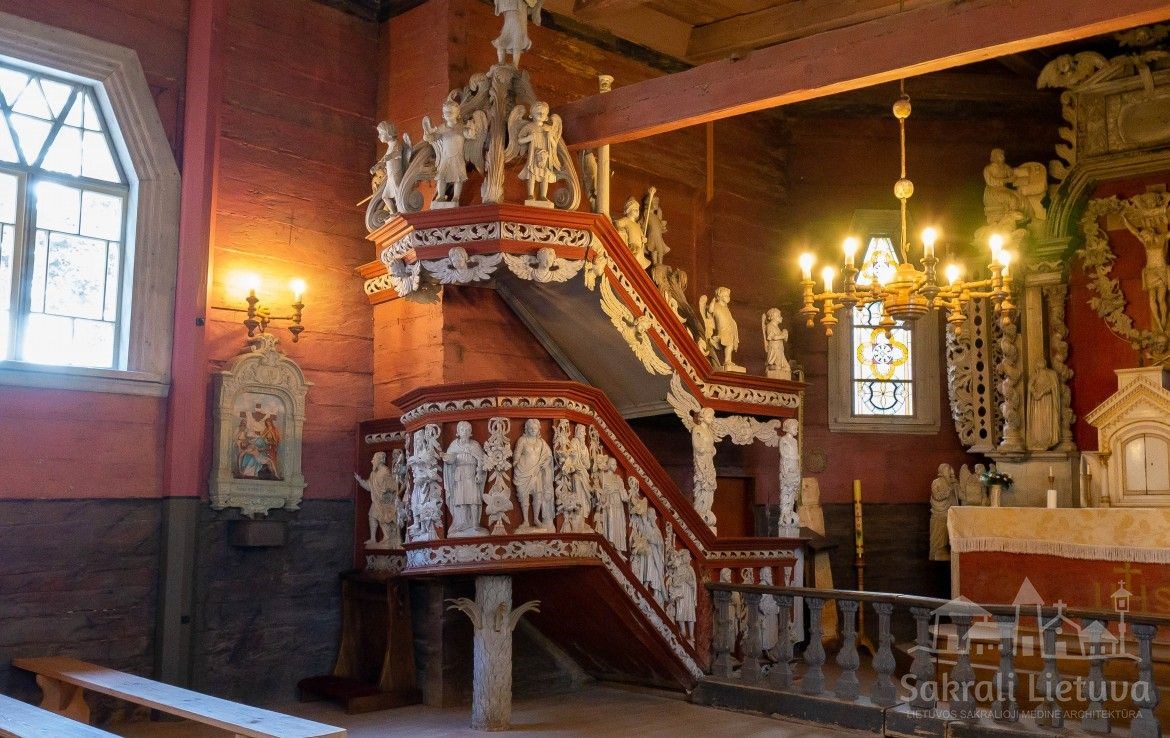 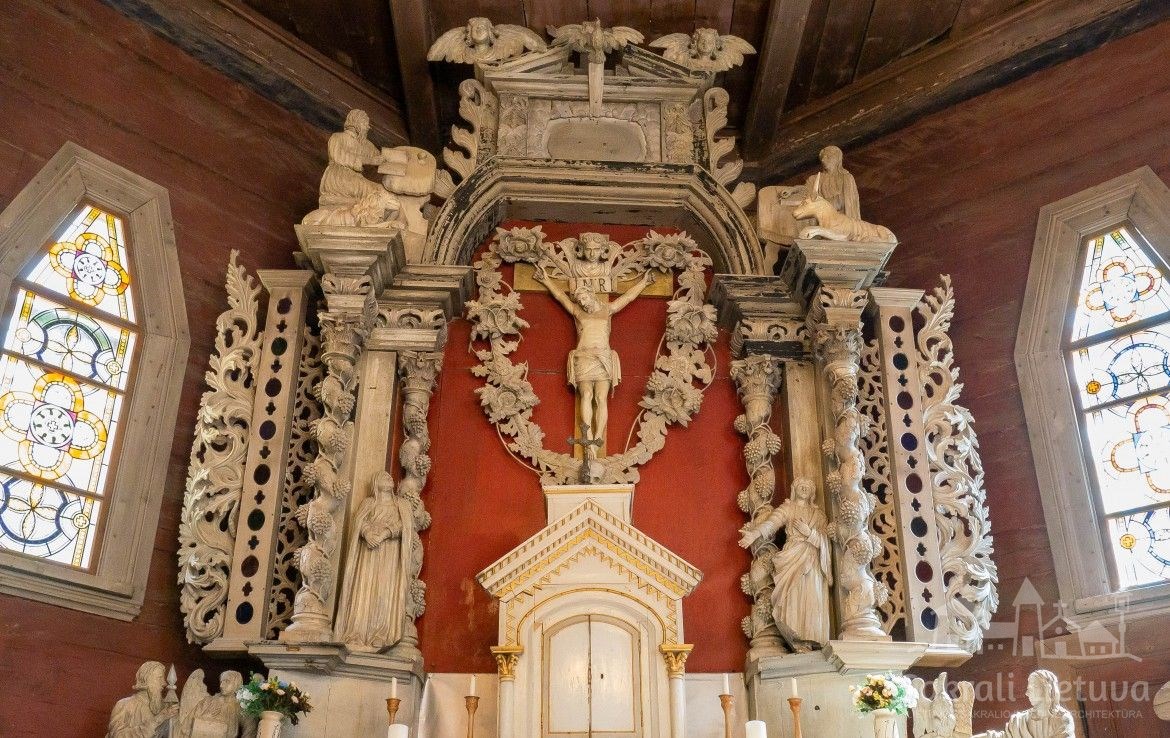 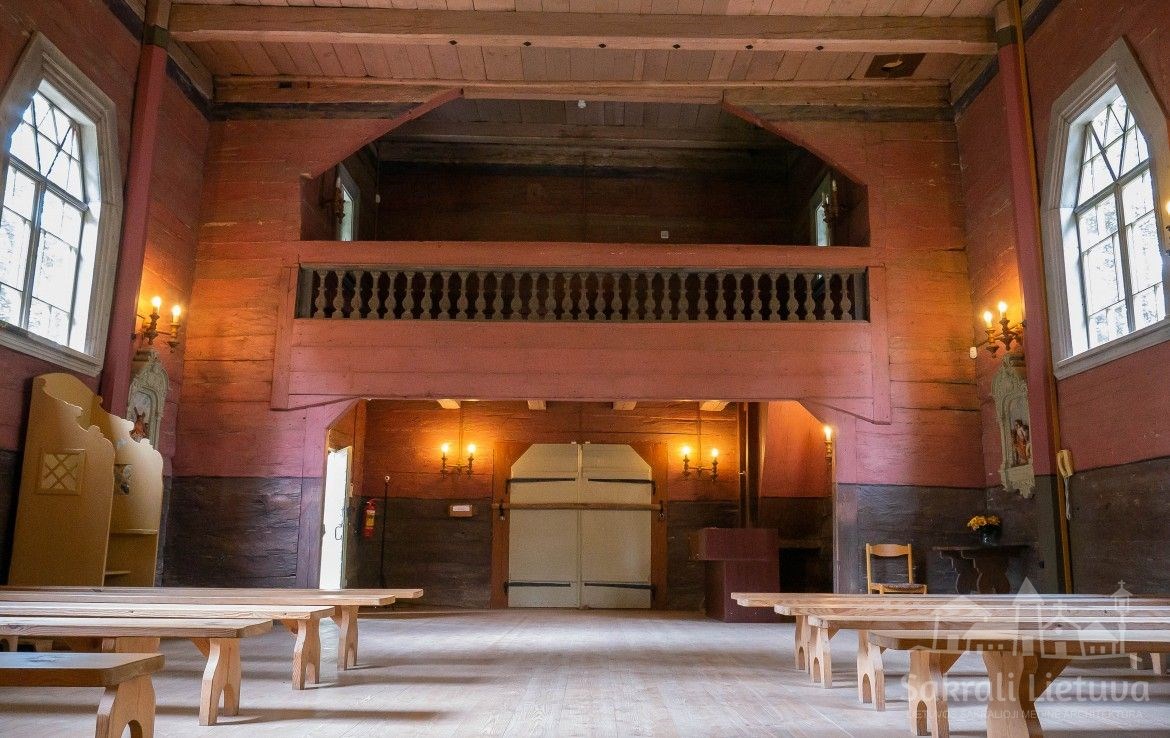 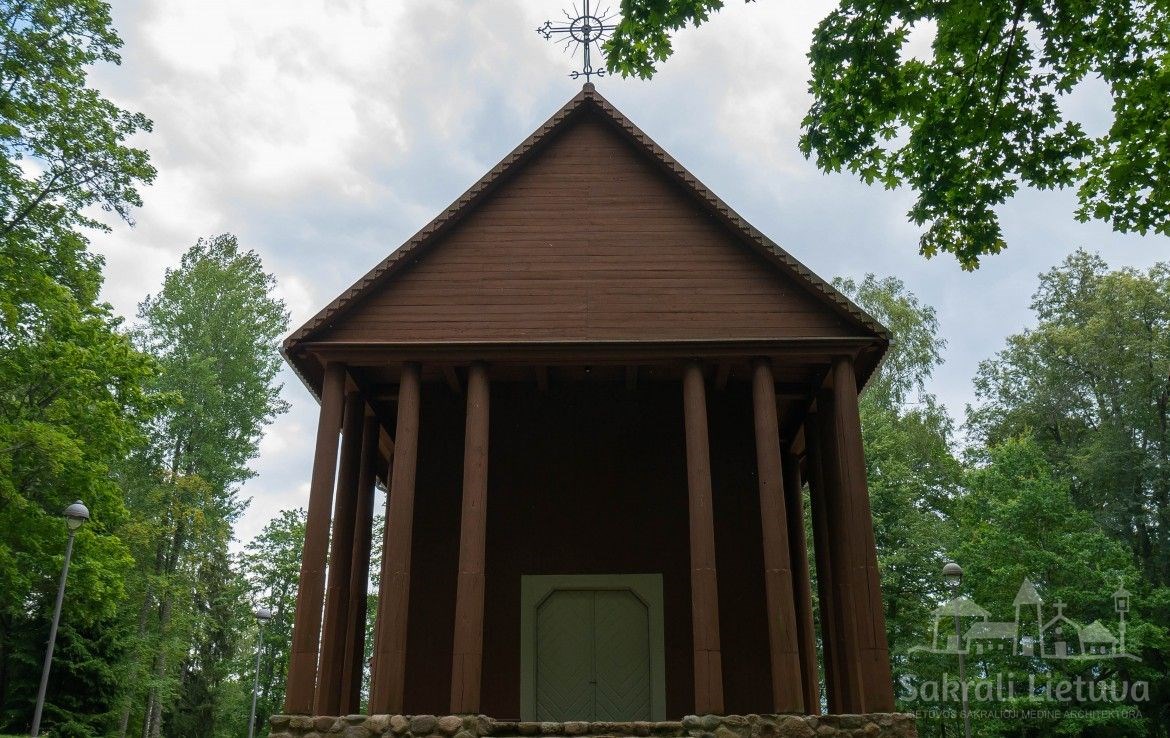 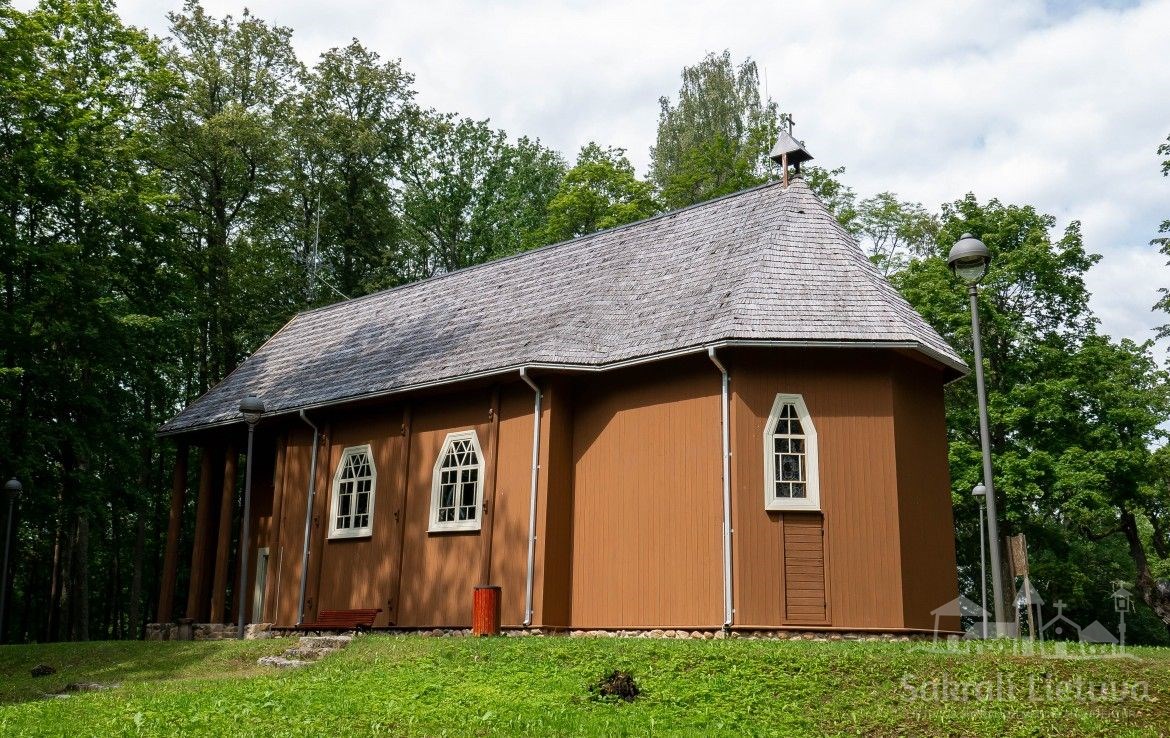 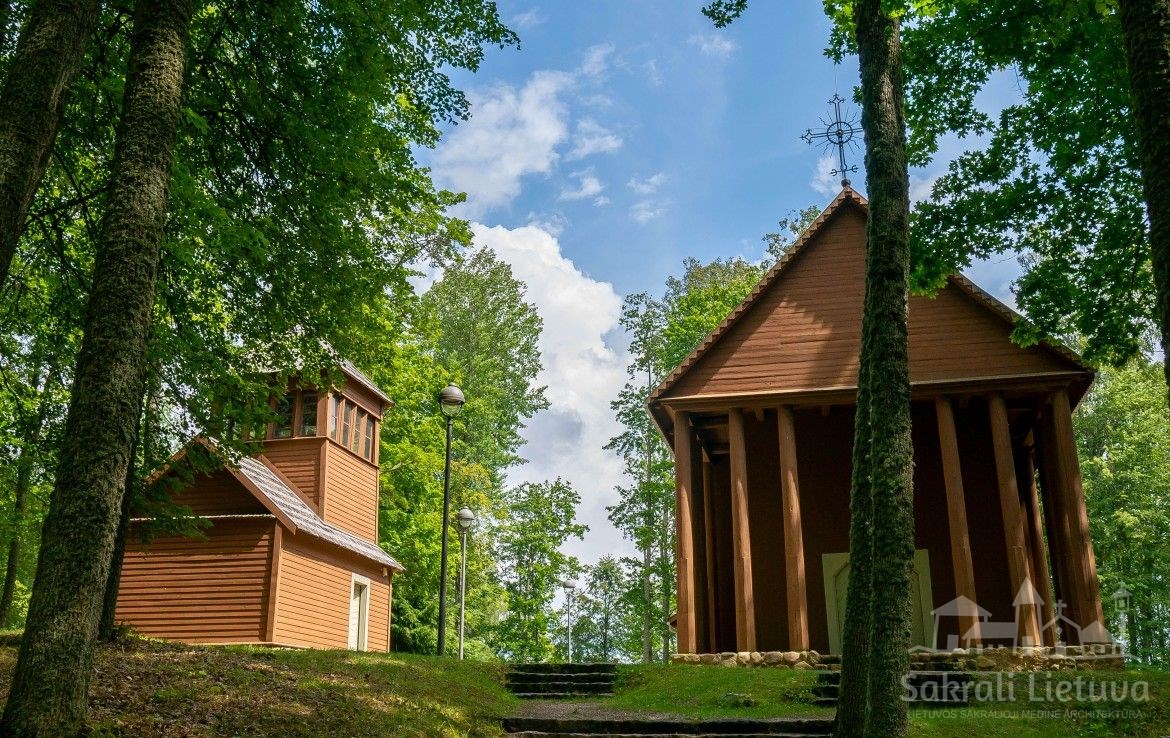 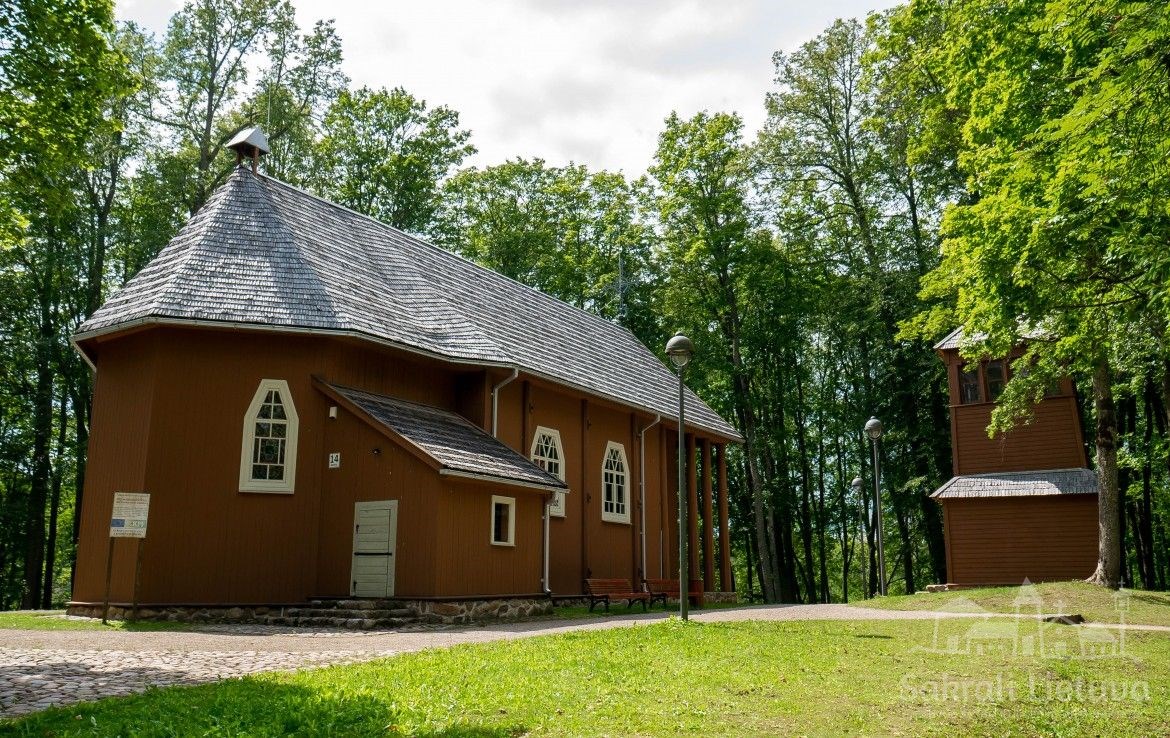