The first predecessor of the church, the chapel of Stakiai (Pamituvys at the time), was built in the middle of 18th century. Later, the founders of Veliuona church, the Zaleckiai, allocated some land and funds in order to build a church. Thanks to them, in 1821, the chapel was rebuilt into a church, and an altar was installed in 1823. In 1875 the church was expanded. In 1909 its interior was renovated.

The significance of the church can be seen not only through architectural point of view, but historical one too. In 19th century, a parish school used to operate here. Motiejus Čiuzevičius, who used to be a priest in Stakiai, participated in the uprising of 1863, and was deported to Siberia, while the school was closed down. In times of The Lithuanian Press Ban, Stakiai priest Feliksas Sereika used to buy forbidden press pieces published in the Lithuanian language and give away to the parishioners. Thanks to his efforts, the deanery building was built as well. During the period from May1906 to May 1907, Juozas Tumas – Vaižgantas served as a curate with this church. Due to his efforts, a permit from Samogitia Bishop was obtained to marry newlyweds at the church of Stakiai. He took an initiative to seek sober local youth, and urged the parishioners refuse doing damage to their health. So far, the parish has been known for St. Anthony from Padua Feast of Indulgence.

The church is compact one in terms of volume; it has a rectangular plan, a portico and an apse. The building has features of Classicism architecture; the main facade holds an expressive Classical portico with a triangular pediment, propped by four columns. The foundation of the church is bricked out from split stone, the church is decorated with ornate small towers. A small eight-walled tower erected above the main facade is open, its helmet (a canopy) in the style of a bell is propped on eight supporting small poles. A sculpture of Blessed Virgin Mary stands inside it. A small tower, identical, still of smaller proportions, decorates the ridge of the presbytery.

Inside the church, three altars made in Baroque style are built. The High Altar is adorned with the picture of St. Anthony from Padua, above which – a superstructure with a Crucifix. In 1903, the organ, made by maker A. Montvilas was installed in the church, which has been operational so far.
In the vicinity of the church, a tall, massive, wooden belfry with a tin-plated hip roof stands. Its foundation is built from stonework. In the belfry, a small altar of St. George, used during processions, is stored. In the south-west corner of the churchyard, a rock cave with a sculpture of Blessed Virgin Mary, trampling underfoot a grass-snake, is built. 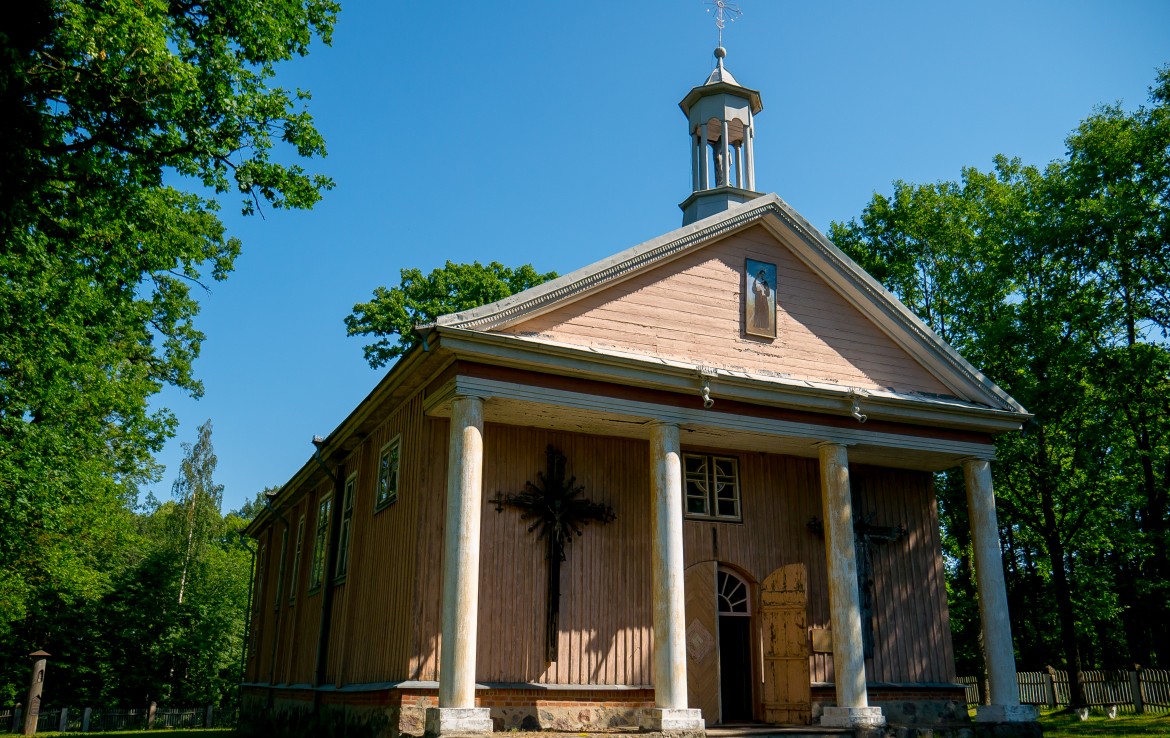 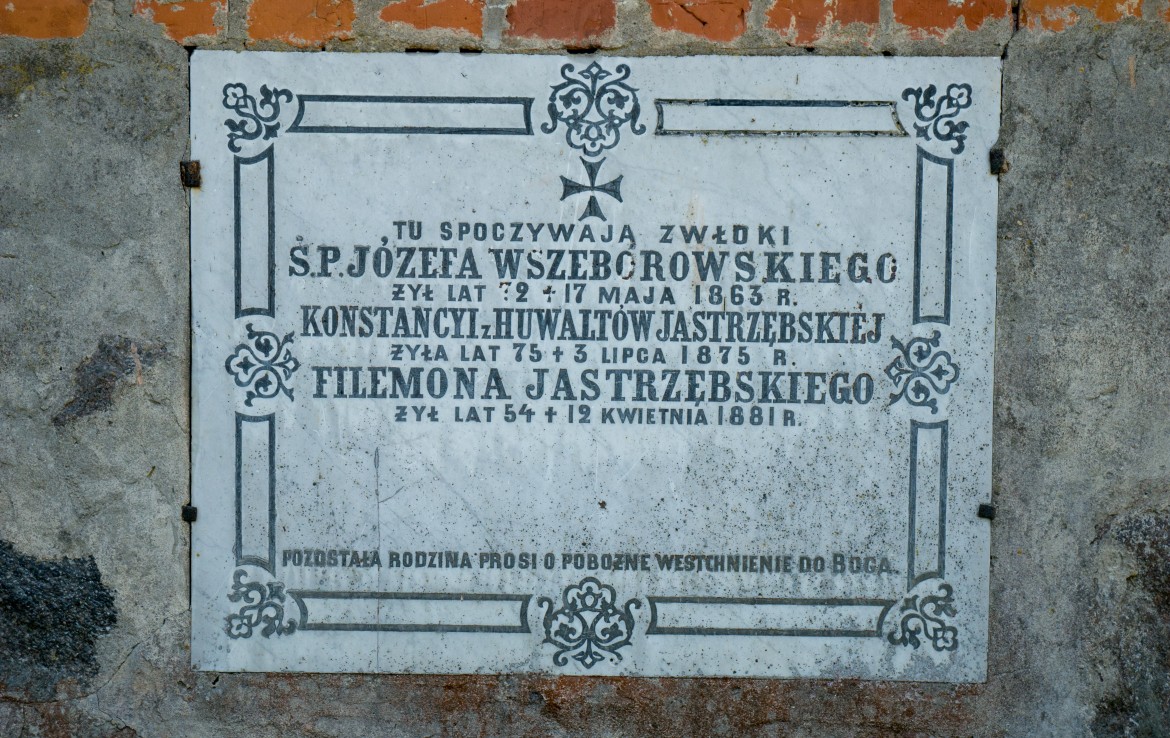 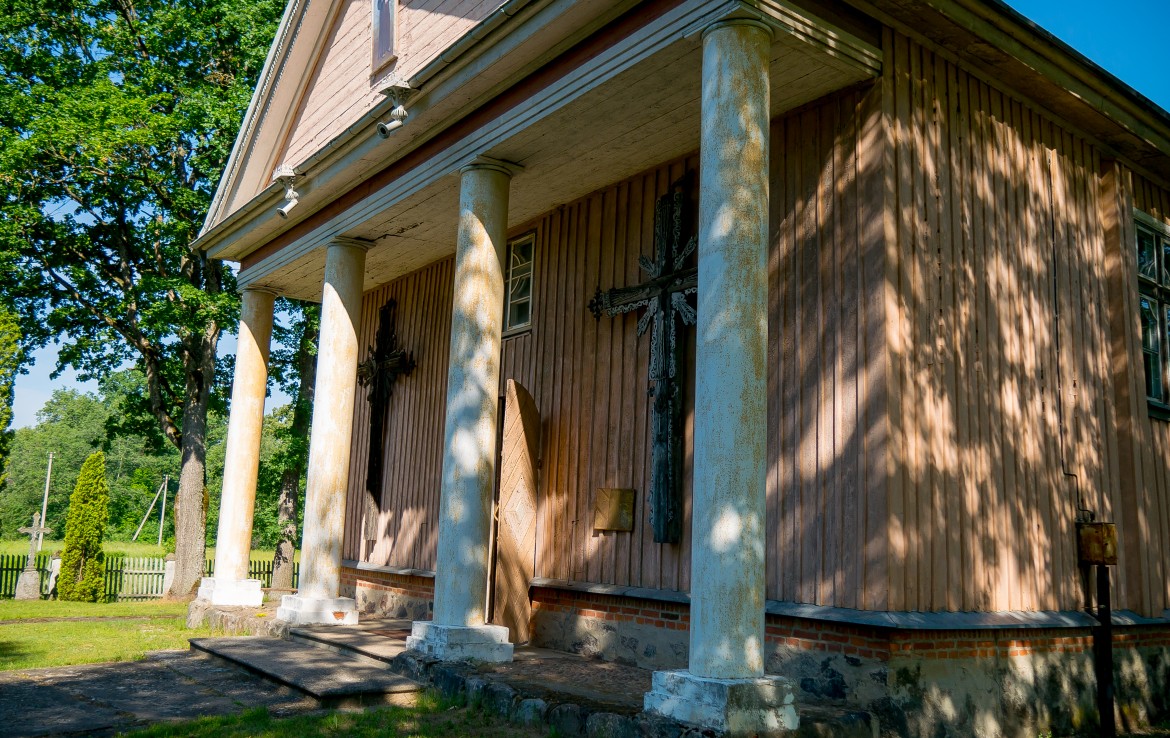 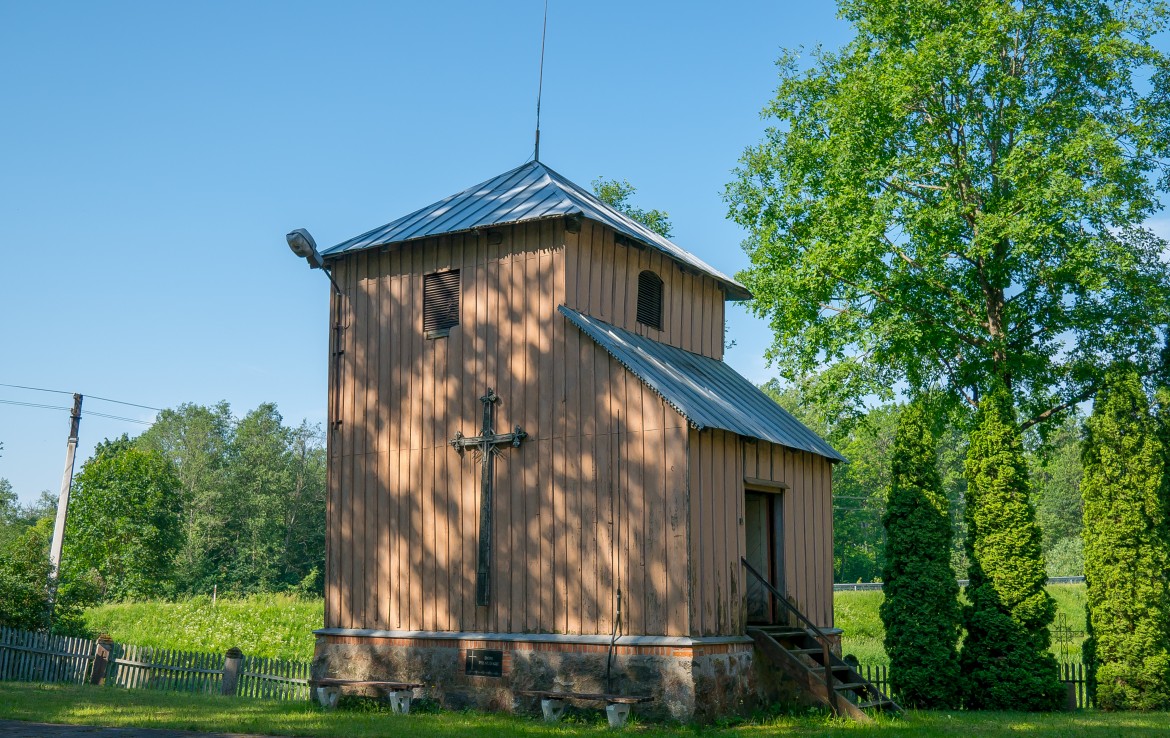 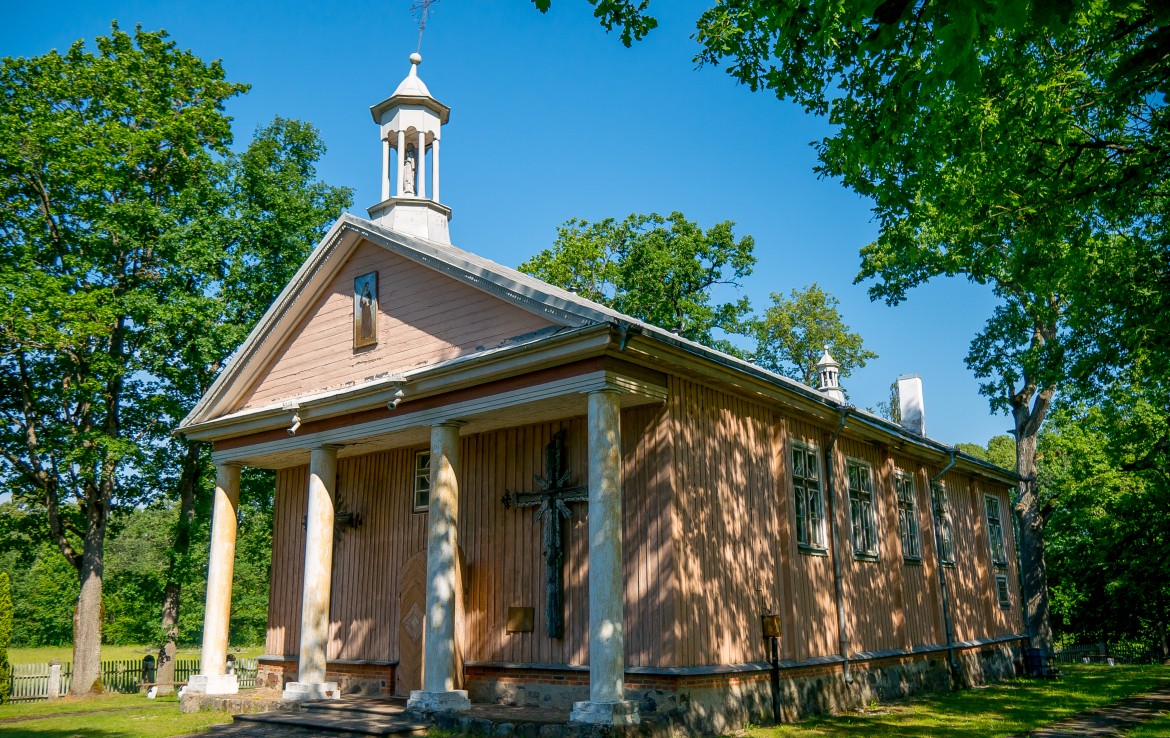 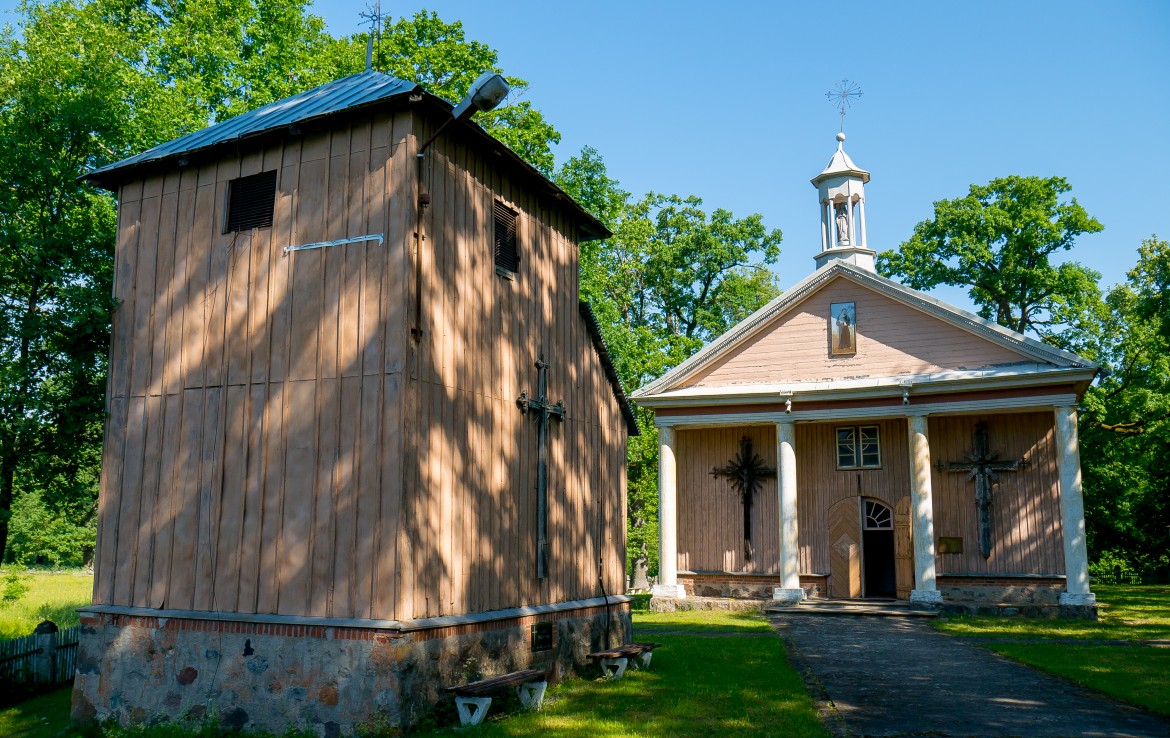 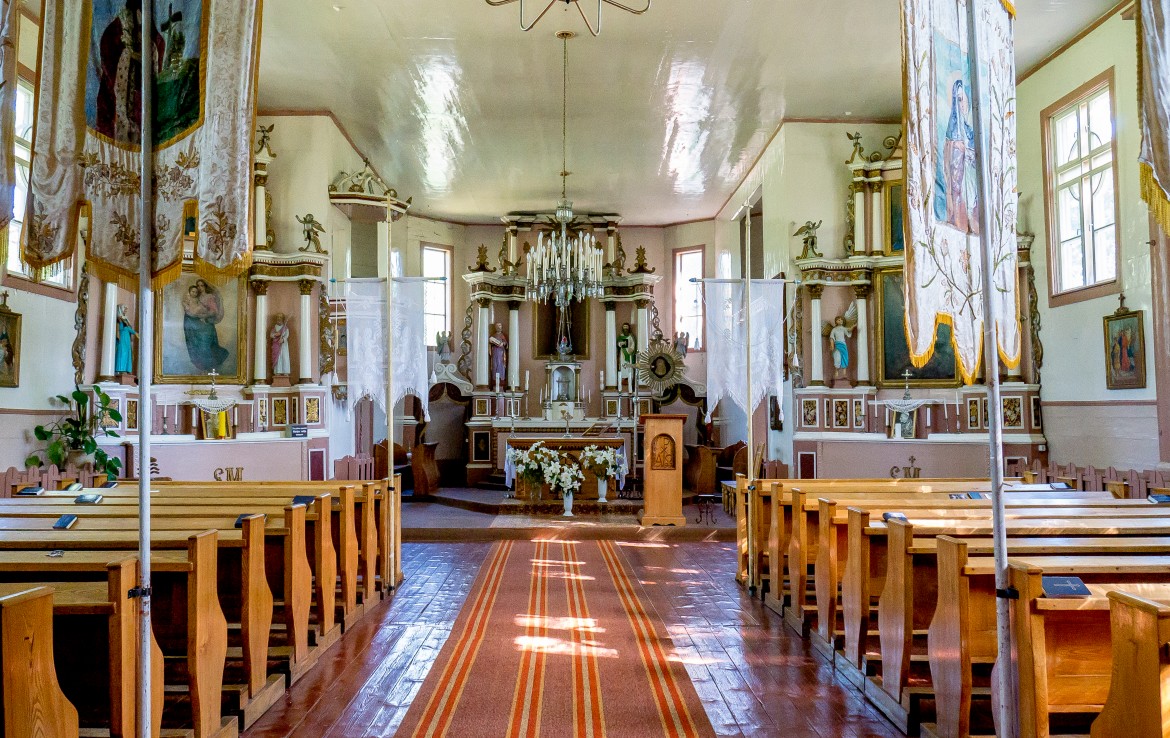 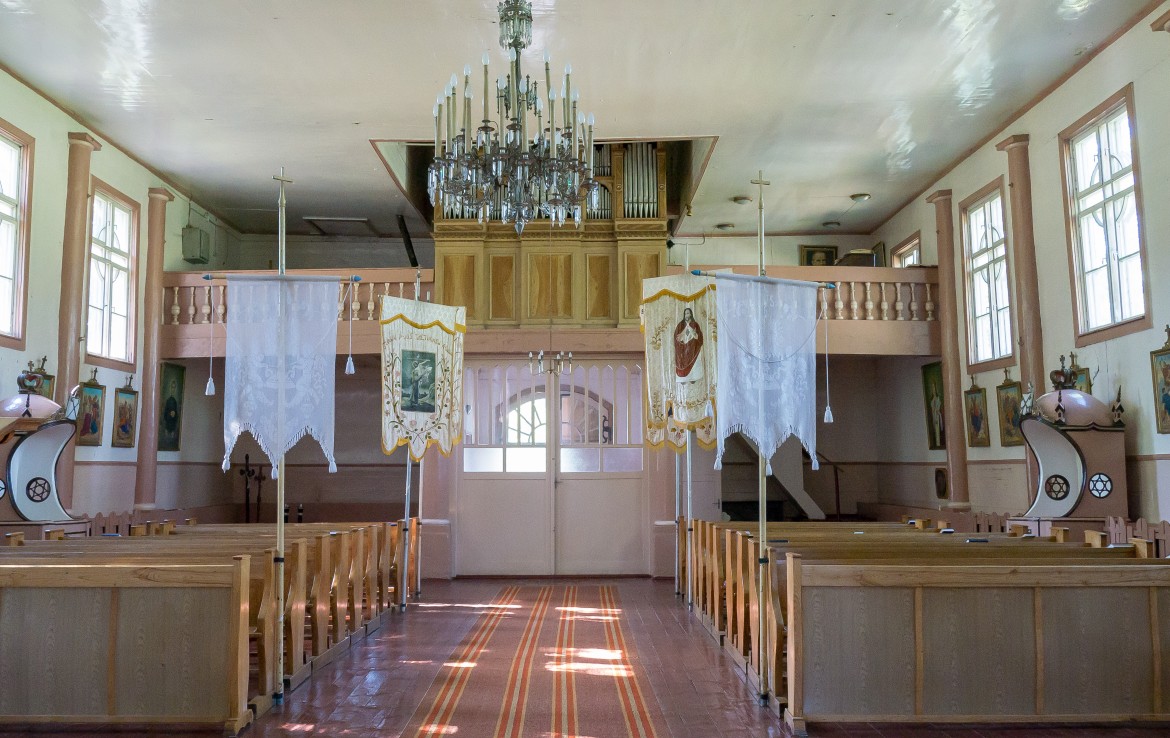 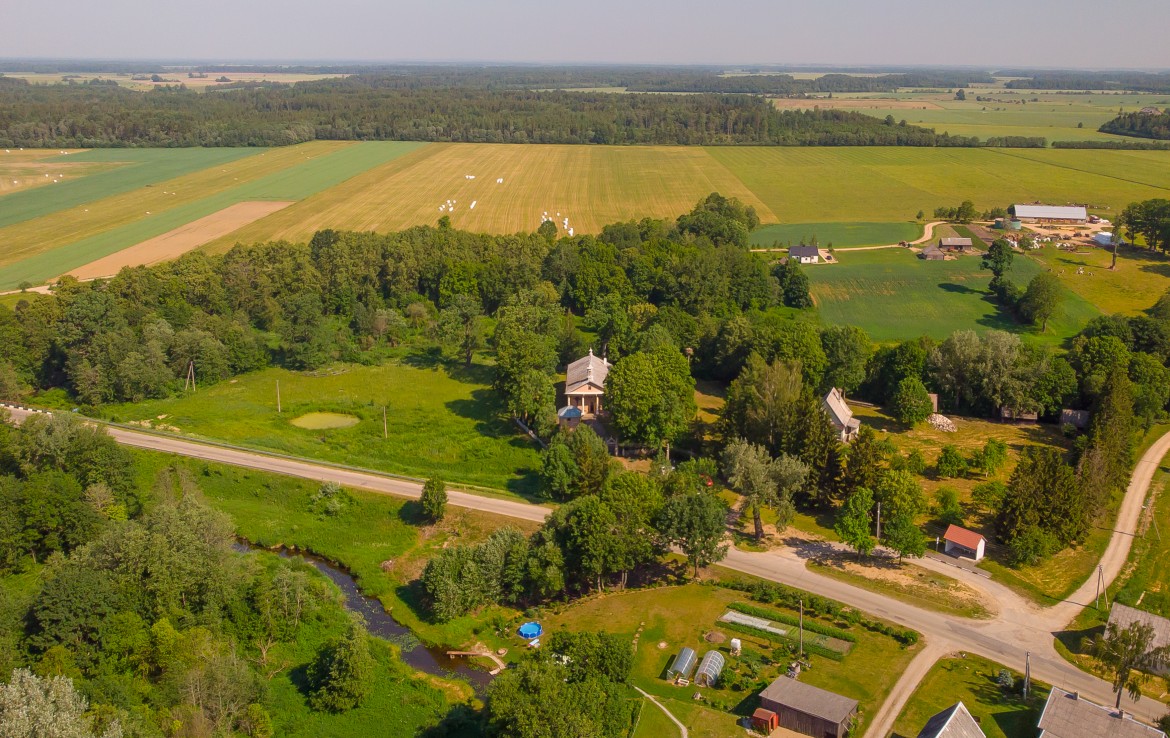 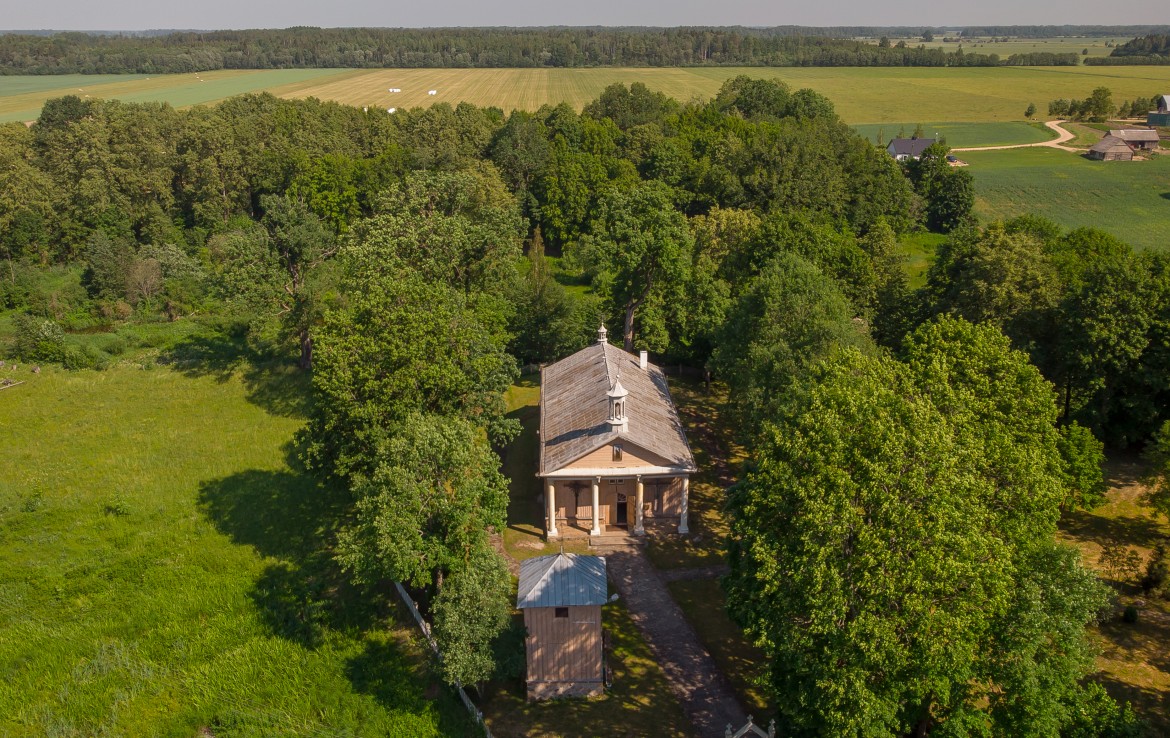