The first church in Pavandenė was built in the early 17th c. thanks to the Okmianskis foundation. There is no data of how the old church used to look like, but it is believed that it changed little up until the early 19th c., when, already slightly damaged, it was reconstructed The works were initiated by the parson Pranciškus Gailevičius, who served in Pavandenė at the time. The restoration of the church was supported not only the congregation, but also the Samogitian stolnik Antanas Gedgaudas. The church was reconstructed from the old church walls up to its windows, which means that the plan of the church did not change. The reconstruction was completed in 1802, but the roof already needed fixing in 1820. The visitation act of the church of the day says that the great altar of the church was dedicated to St Anne and thus the church of Pavandenė was titled after St Anne too. Other major renovation works took place in 1912-1913, when the building acquired the looks that we can see today.

What makes the compact rectangular prayer house with a gable roof in Pavandenė distinct is the five-part presbytery with a wide three-part gable roof with recesses. The main highlight of the church is the massive belfry above the pediment of the front façade. The two-section octagonal tower with a complex bell roof is finished with a forged cross with an angel-shaped weathercock. The neo-Baroque tower was built during the reconstruction of 1912, when the old ones were demolished. The front façade has some features of Classicist architecture. The high pediment, divided from the front façade with a canopy, is decorated with Classicist rectangular windows with cornices. The church, built on a low stone masonry foundation is covered with vertical panels. The height of the building is also highlighted by pairs of parallel log fasteners. The hall-type church has three naves – the interior space is divided by columns on high pedestals, connected by flat arches. The main part is separated from the entryway with a wooden wall and above the entryway there is the choir premise with an organ. The interior, painted in light blue and yellowish shades, has 5 neo-Baroque altars.

The irregular oval churchyard is surrounded with a low stone masonry fence. The three-part stone masonry gate with rectangular turrets was built in 1974. The churchyard features 14 brick chapels, signifying the Way of the Cross. The chapels, built on a concrete foundation, are finished with pavilion roofs with forged suns. The octagonal belfry of the church is wooden as well, built on a low stone masonry foundation . The front part of the belfry has an entryway. The entire structure is covered with an octagonal tin roof. A bit further from the church there is a wooden storage with a portico of four columns. 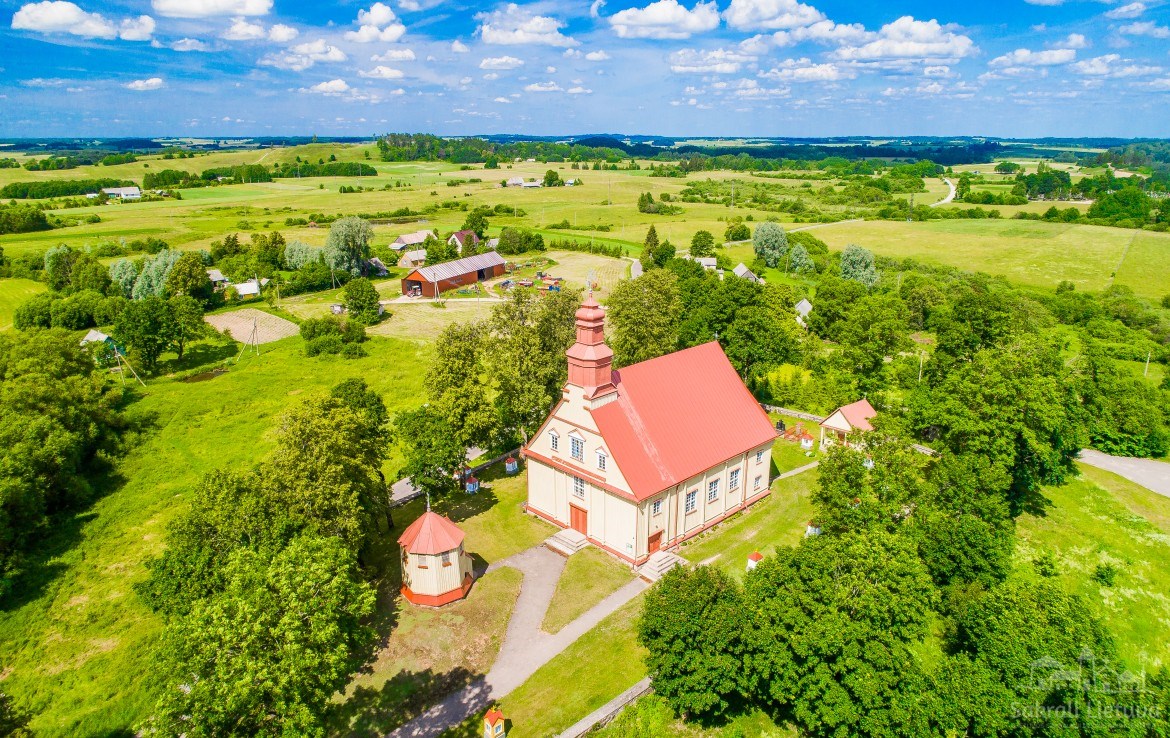 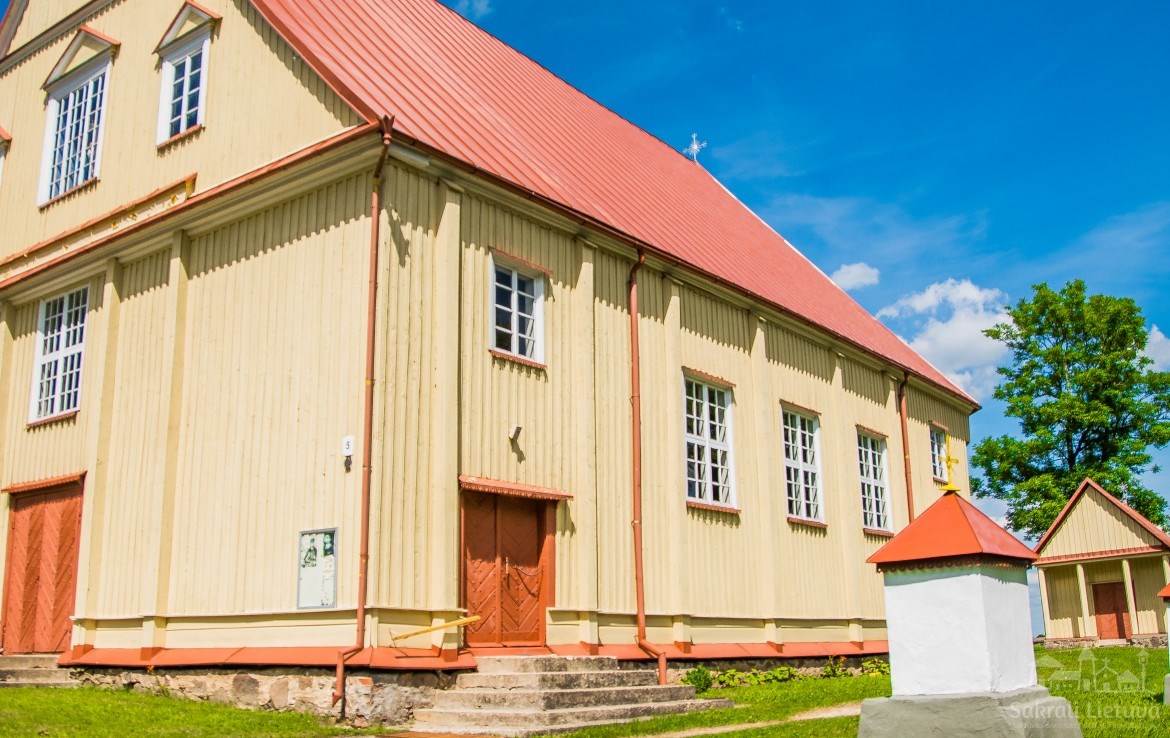 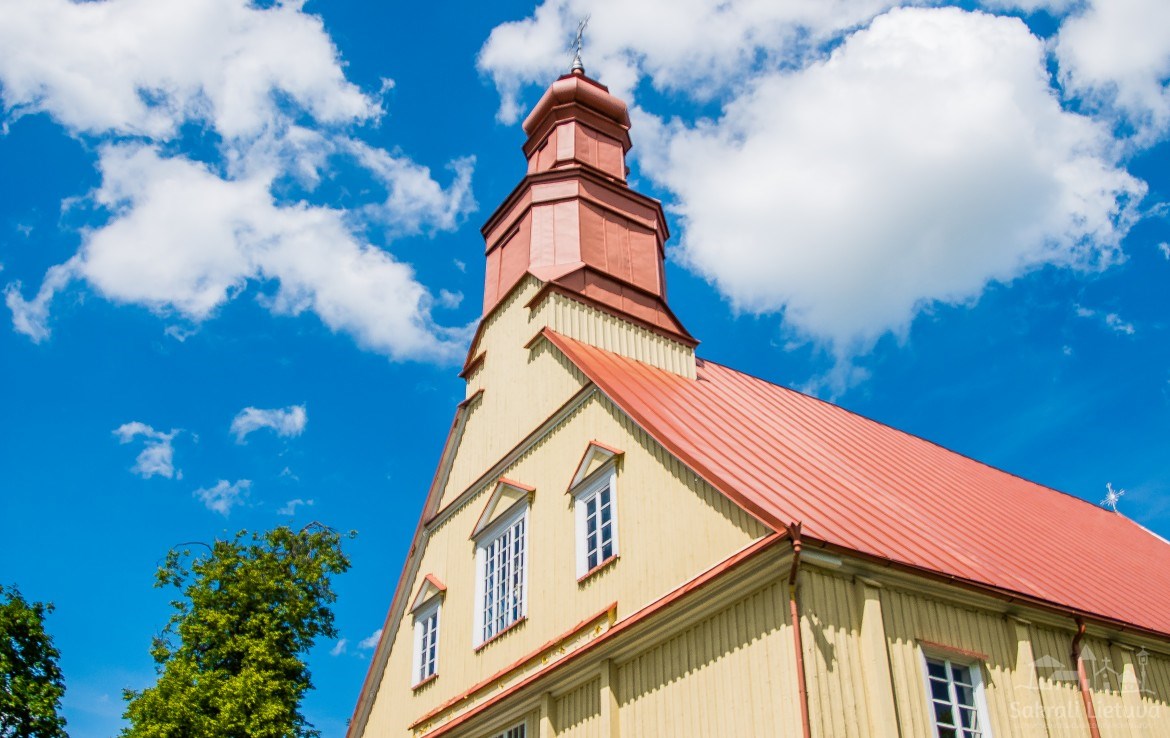 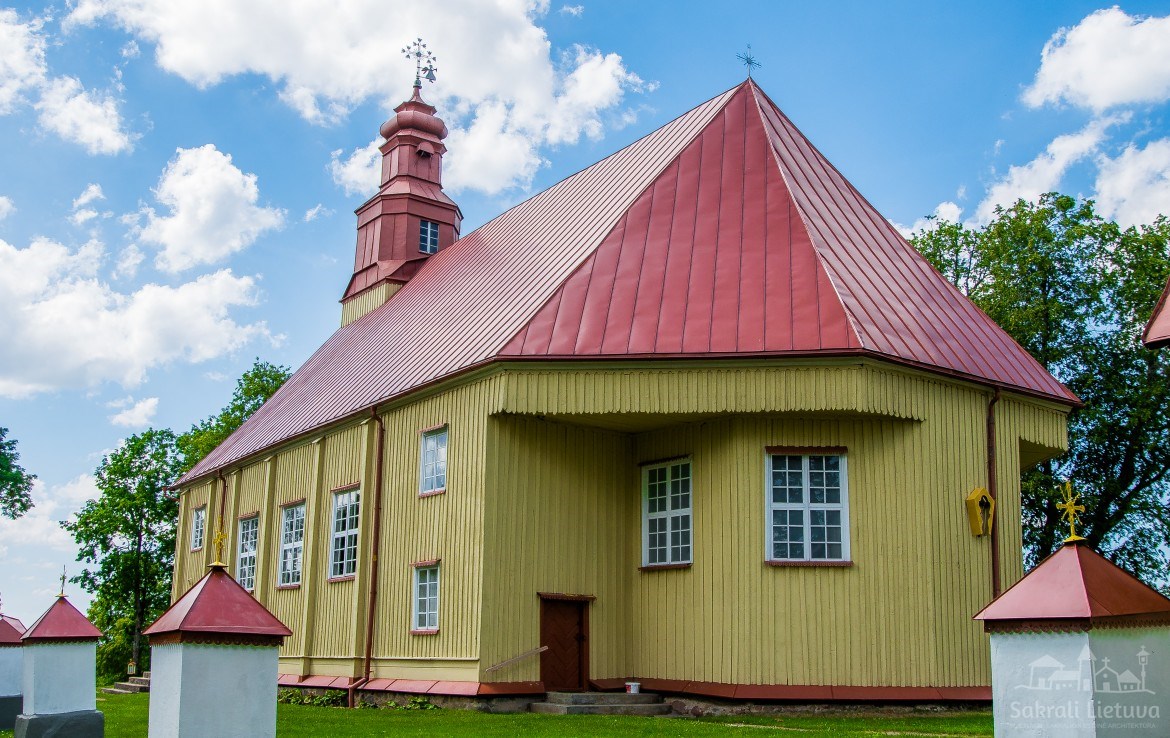 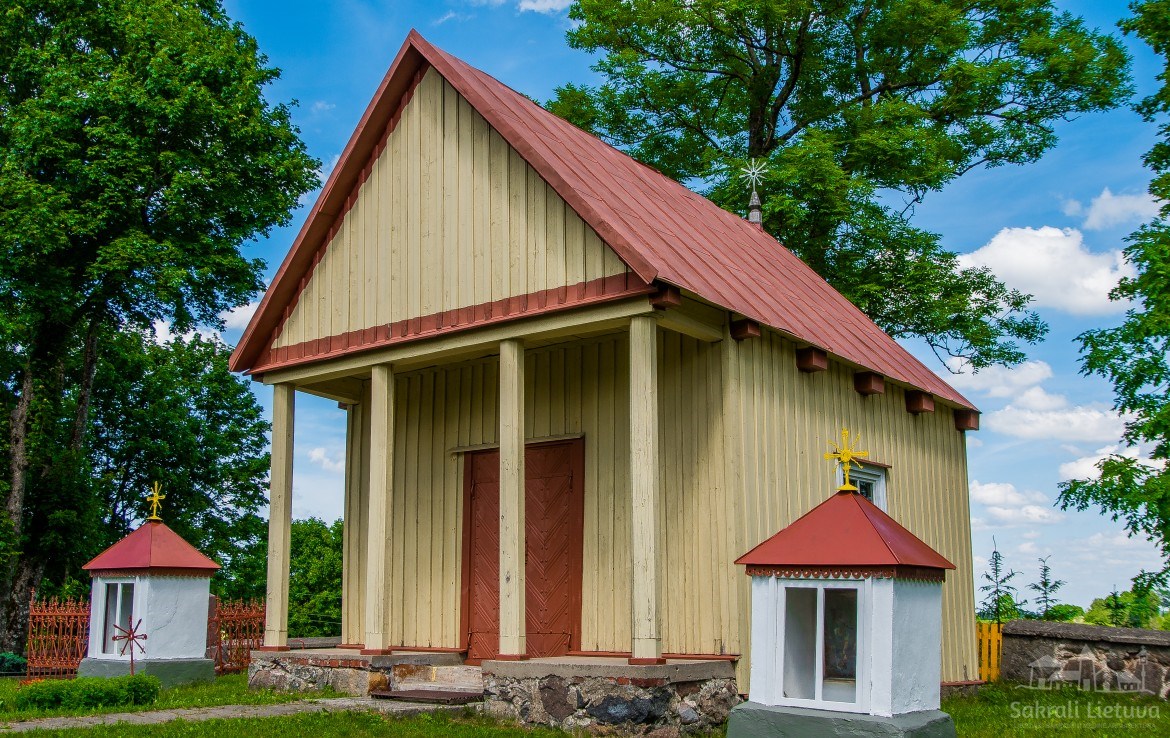 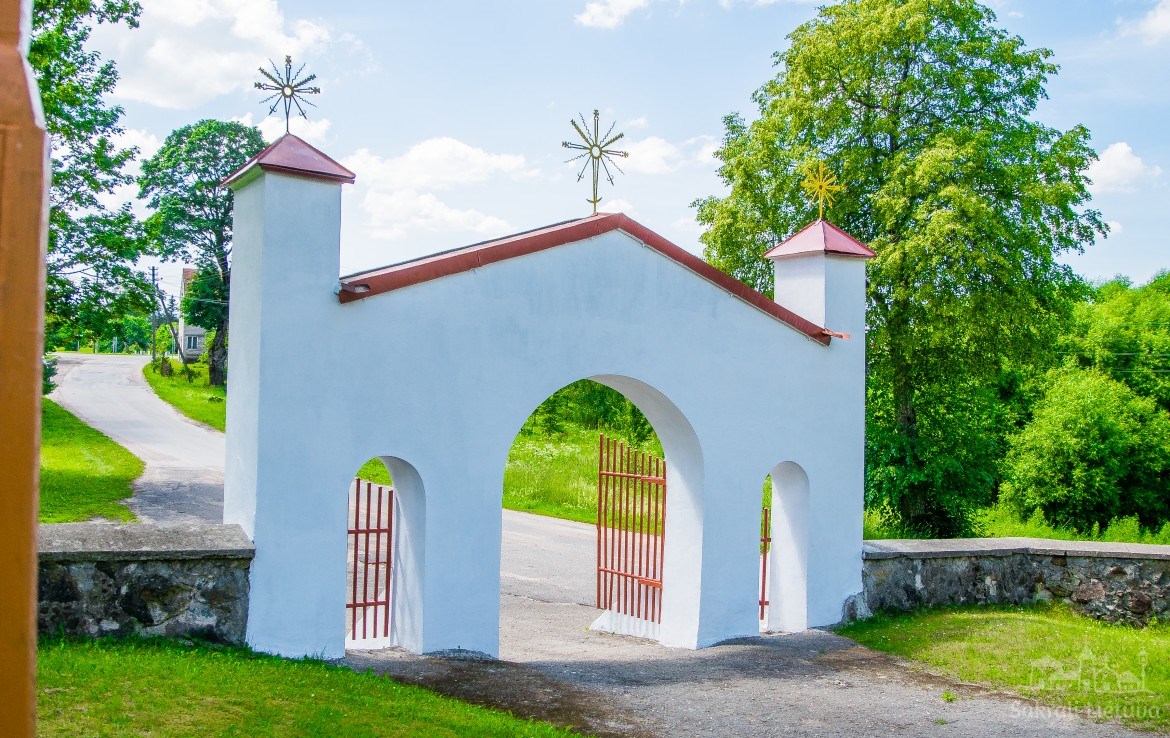 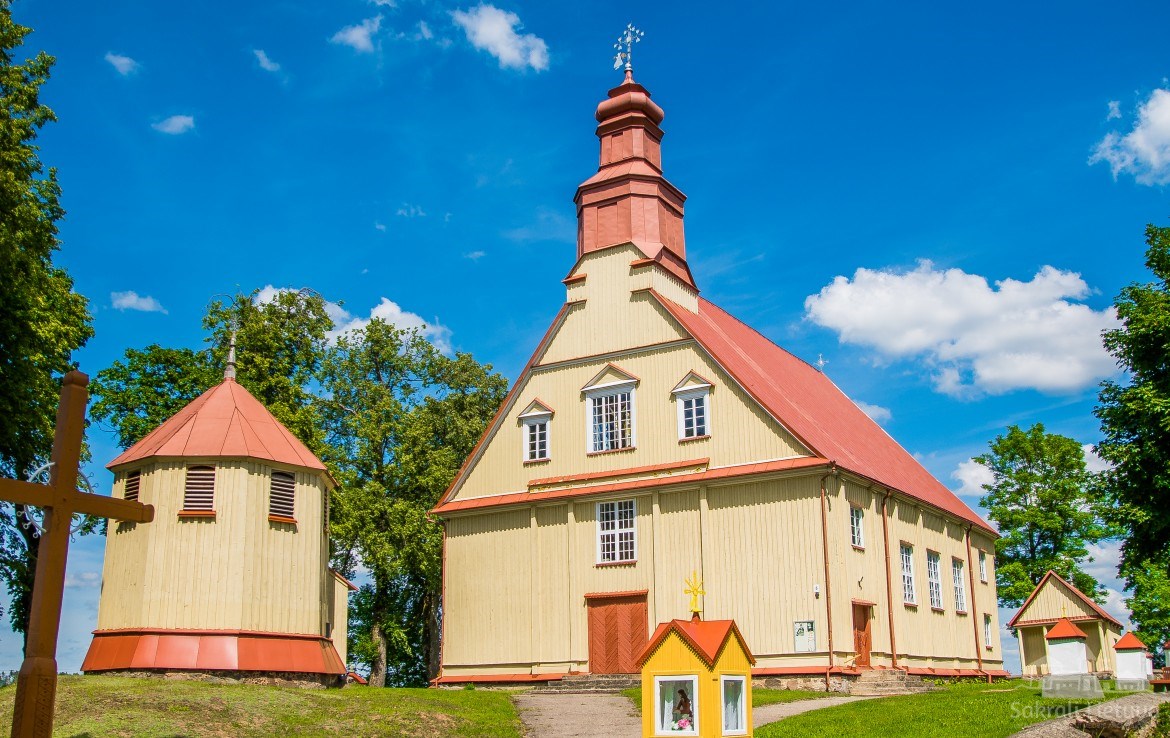 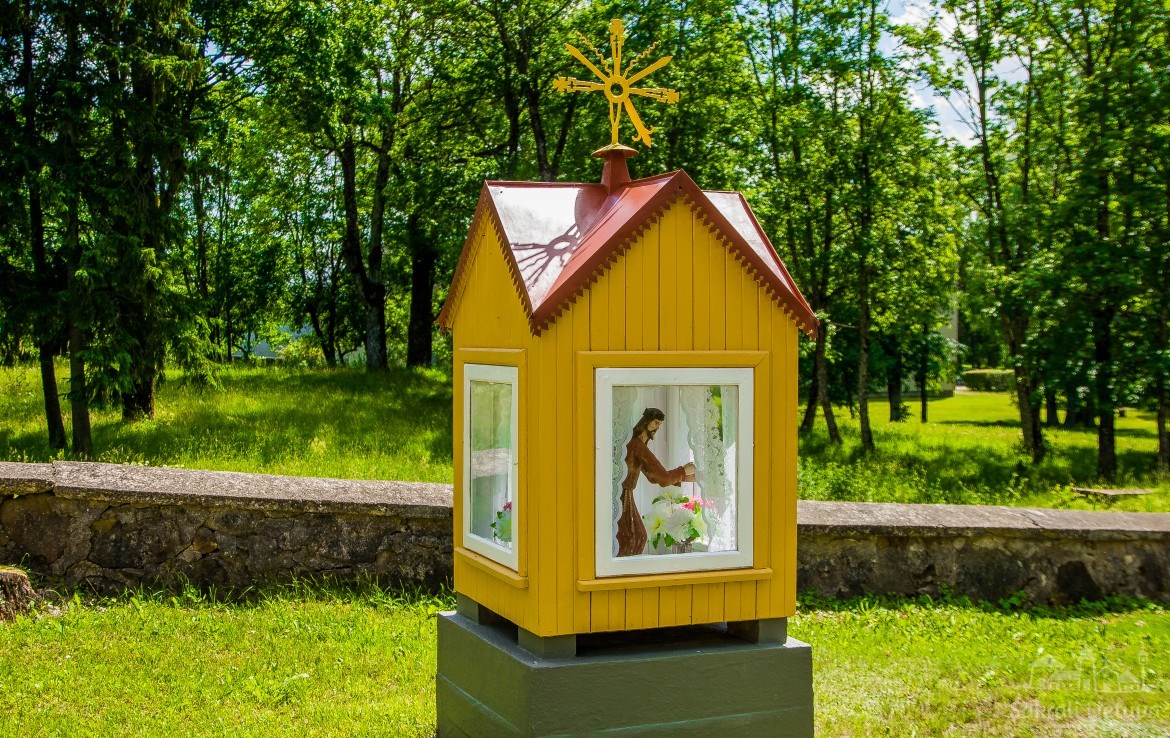 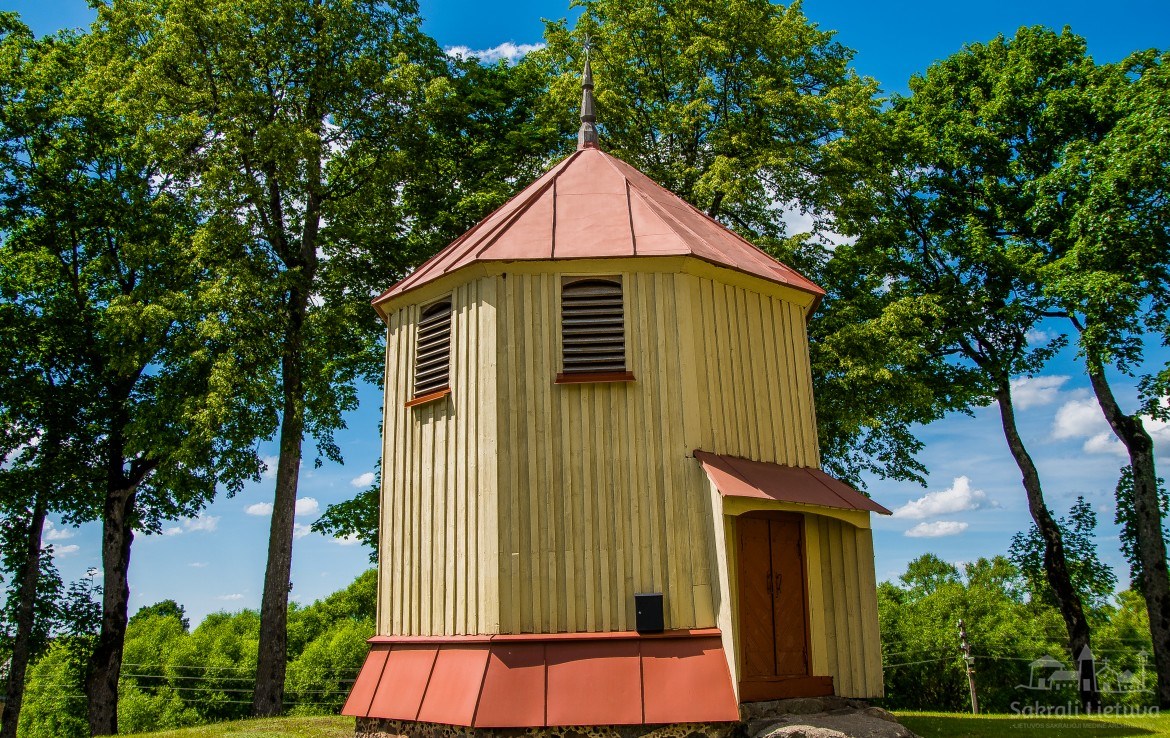 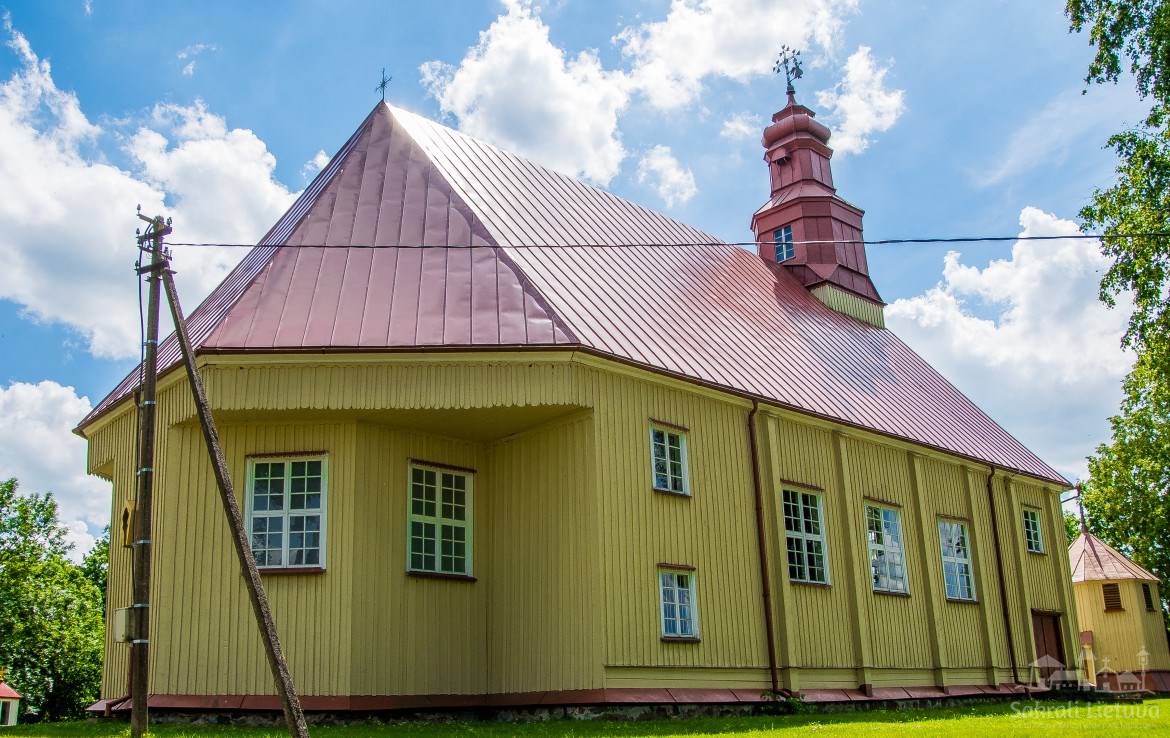 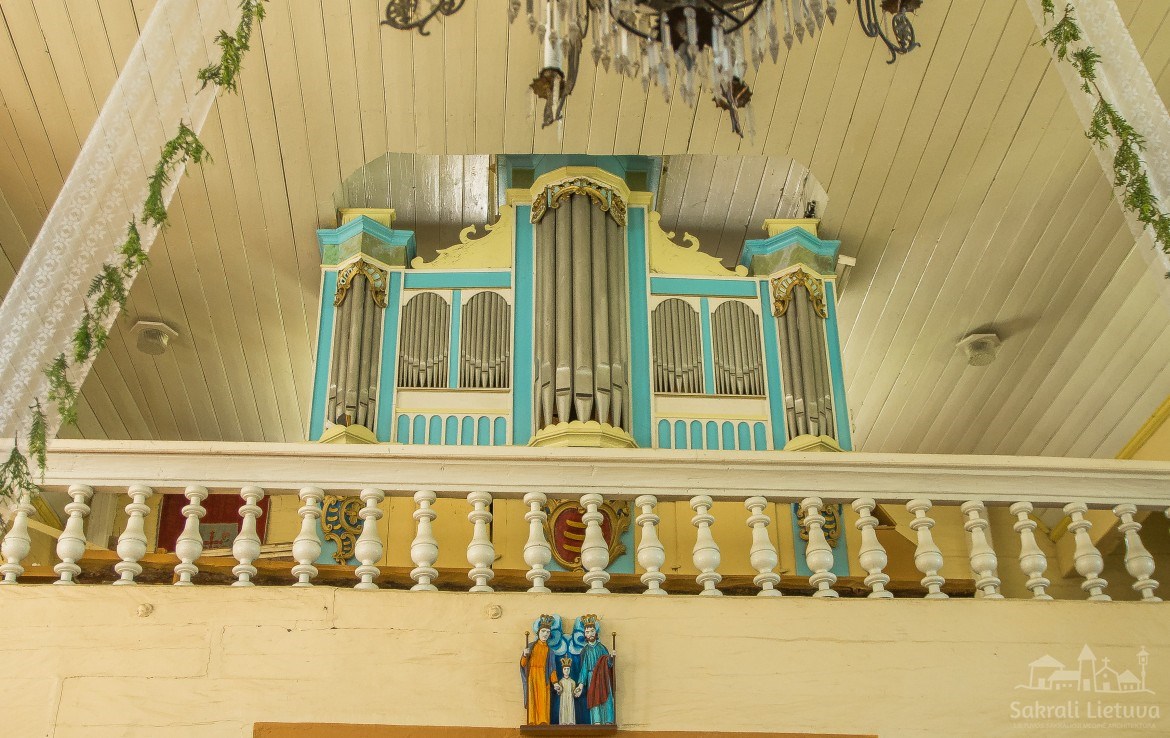 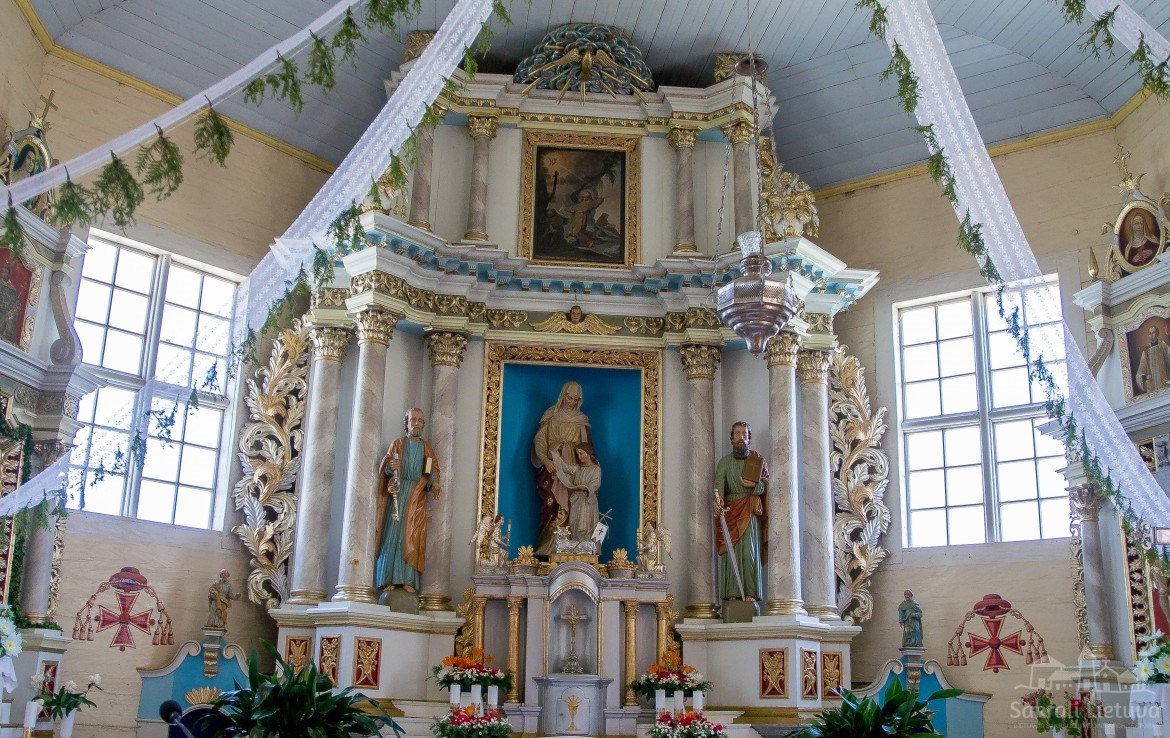 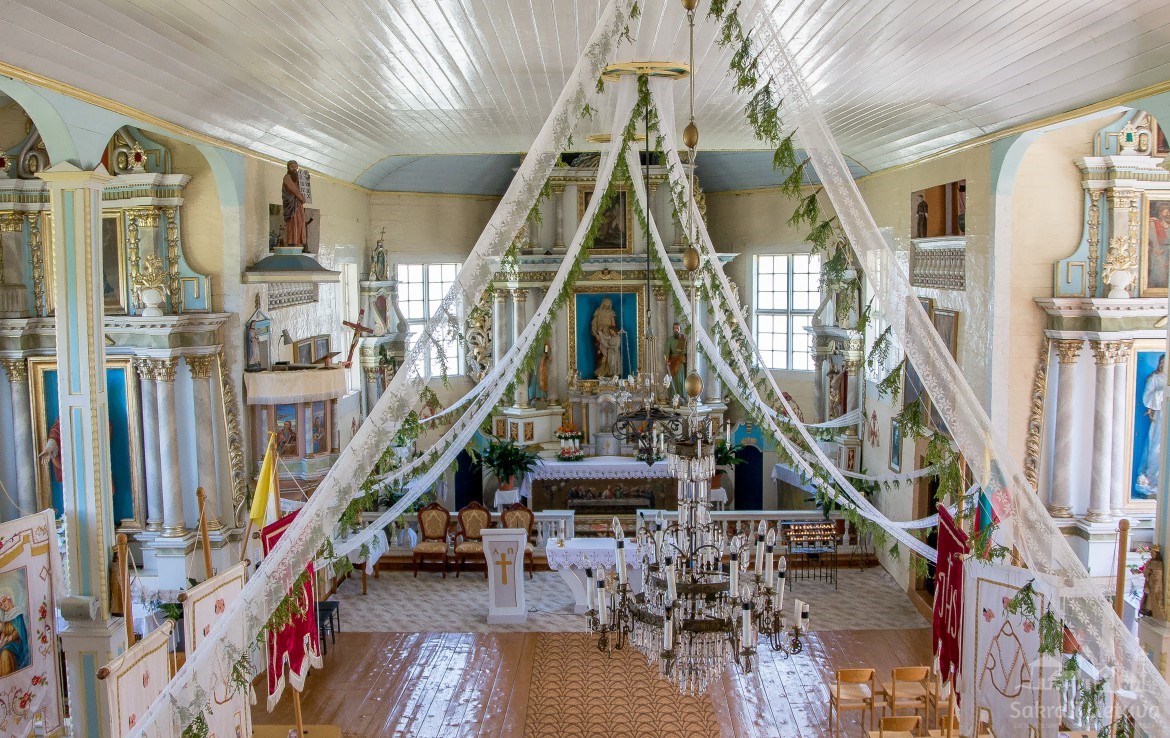 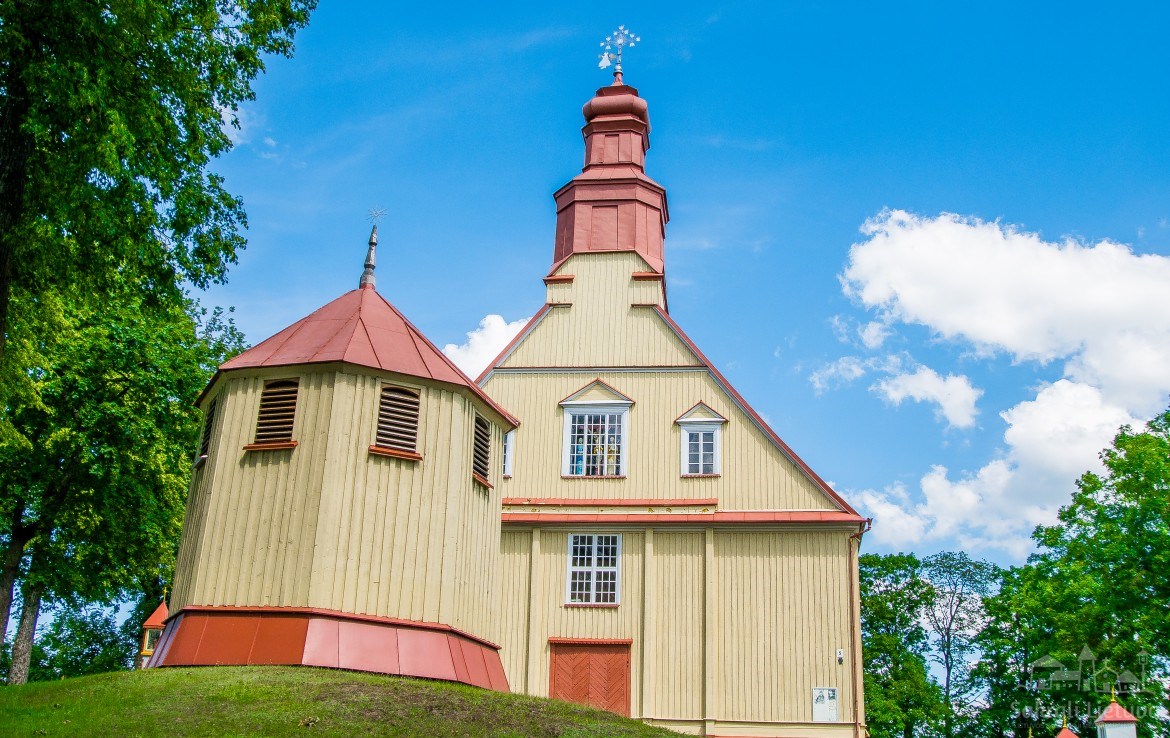 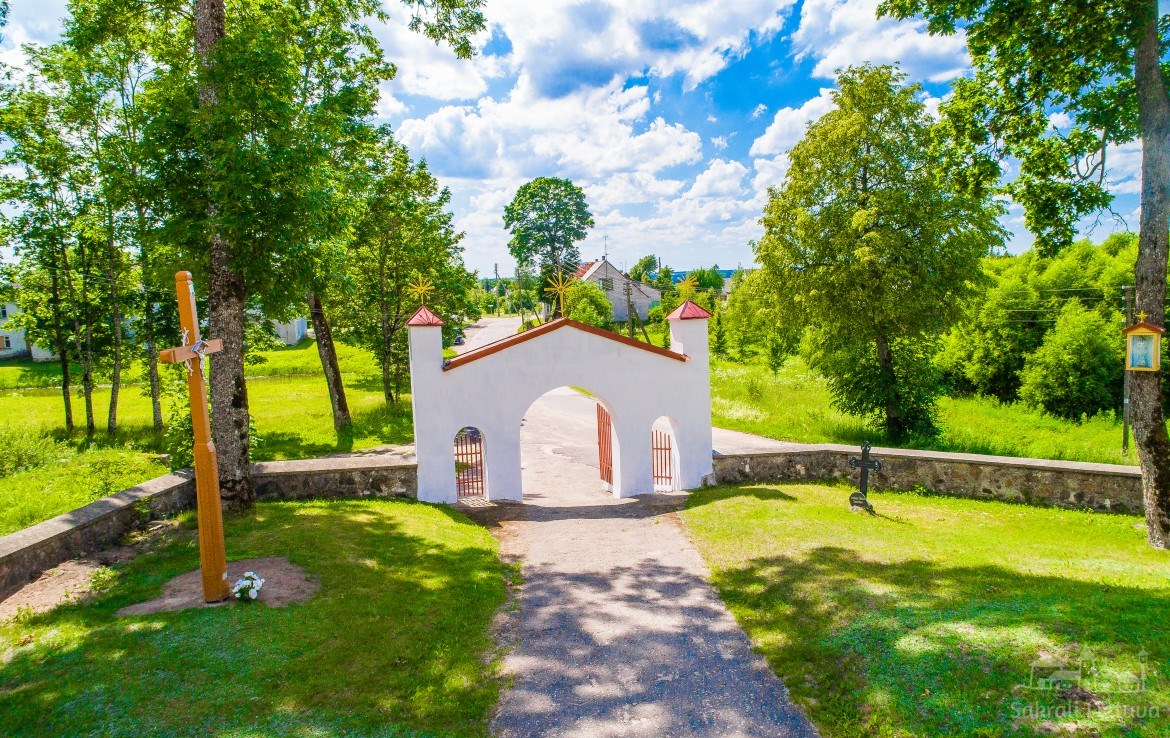 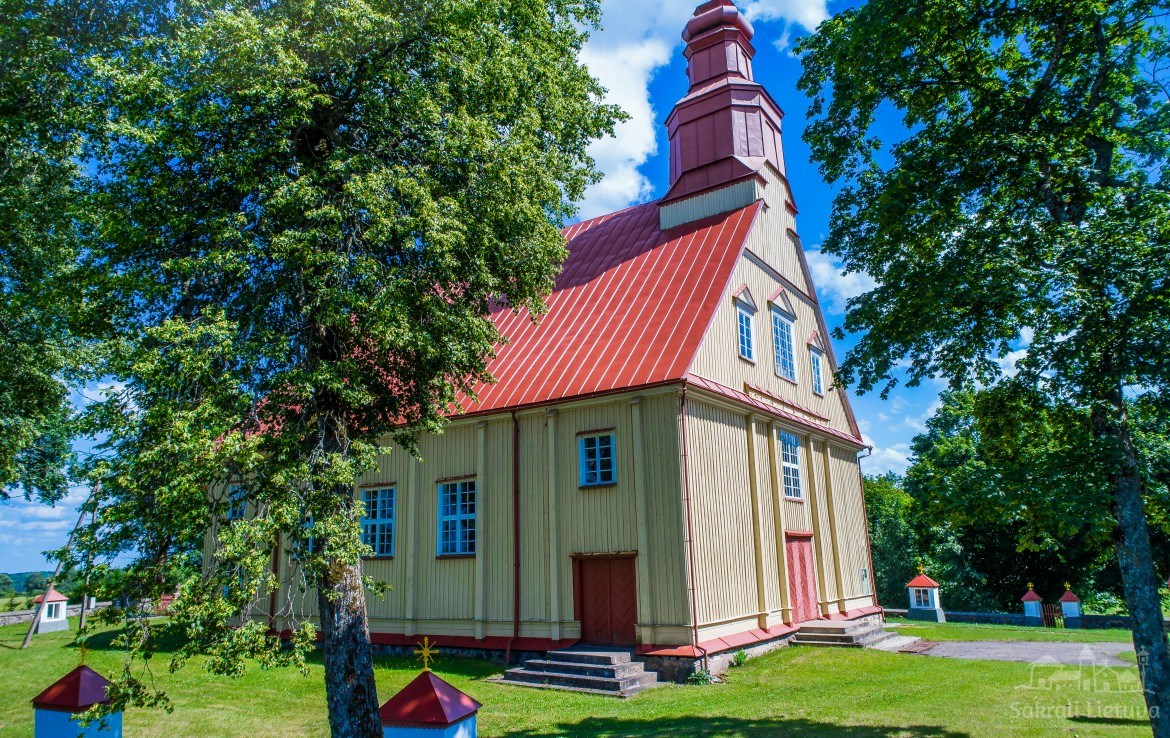