The first Nevarėnai church was built back in 1602 by Count Zabiela, after the Samogitian Bishop M. Giedraitis appointed a priest to the church and after the Grand Duke of Lithuania Zigmantas Vaza (Sigismund Vasa) donated the foundation to it. In 1785, the present wooden church was built, and in 1911 Nevarėnai parish was established there.

The church is of folk architecture style and has Classicist features. It is a hall church of a Latin cross-shaped layout, with one nave and transepts, two sacristies, a tower on the main facade, pedestals, and a five-wall apse. The walls are boarded with vertical planks and narrower slats, and water boards fixed along the building perimeter above the plinth. The tower has a square base, its gambrel roof is covered with sheet steel (the shingle roof has not survived to date), and topped by an ornamented cross with the figure of a trumpeting angel. A similar construction is echoed in the apse and transept pediments with crosses. The facade windows and the doors are edged; all the doors have metal fittings and are boarded in herringbone pattern.

Right after entering the church, one’s eye is caught by the ante-nave separated by four quadrangular supporting columns and an organ area above. The organ case is decorated with relief carvings, vases, and openwork ornaments. The organ area has an interesting floor fixed using wooden nails with big heads.
The church interior features abundant values of sacred art. The altars are folk style, made by local craftsmen, but they also have some Classicism features. The great altar has the Crucifixion sculpture group: the Virgin Mary, Veronica and Magdalene, and an emblematic sculpture composition Arma Christi. The left side altar includes the picture of St. Simon and St. Judas Thaddeus, and the right one – the picture of St. George. The side altar of the Most Blessed Virgin Mary on the left includes a tabernacle, two paintings and four sculptures; the side altar of the Transfiguration of Jesus Christ on the right has two paintings and four sculptures.

The painting of St. Romuald is among the more valuable pictures decorating the walls. It is an example of a painting of the Romantic era created by the painter A. Čapskis in 1839. The church has many various wooden sculptures. The organ area includes a stylized Crucifix with a stylish perizoma. It may have been created together with the great altar.

An old Samogitian folk-style belfry is located next to the church. The two-storey belfry of a rectangular layout has the lower part much wider than the upper one. Its door is covered by a small, nice roof. The first wooden belfry mentioned in archival sources has not survived to date, and the existing one was built in 1818, using the manor’s funds. It has a masonry foundation, the first floor walls are have raster-based structure, the second floor is made of frame covered with vertical wide boards with narrower slats. The roof was previously covered with shingles10, now replaced with sheet steel. The door is two-leaf, with metal fittings, boarded in herringbone pattern.

The churchyard features a particularly decorative chapel of the Most Blessed Our Lady of Sorrows. It has two turrets and carved volute wings. The turrets are topped with forged metal crosses. The foundation is made a pink granite millstone.

The church complex also includes a chapel pole with four-facades featuring exquisite structure. Its octagonal small roof is decorated with a small cross, and the underside of the four-sided, box-shaped chapel is decorated with verge trims along the entire perimeter. The chapel pole houses wooden sculptures of the Most Blessed Virgin Mary, the Pensive Christ, as well as other works of folk craftsmen. 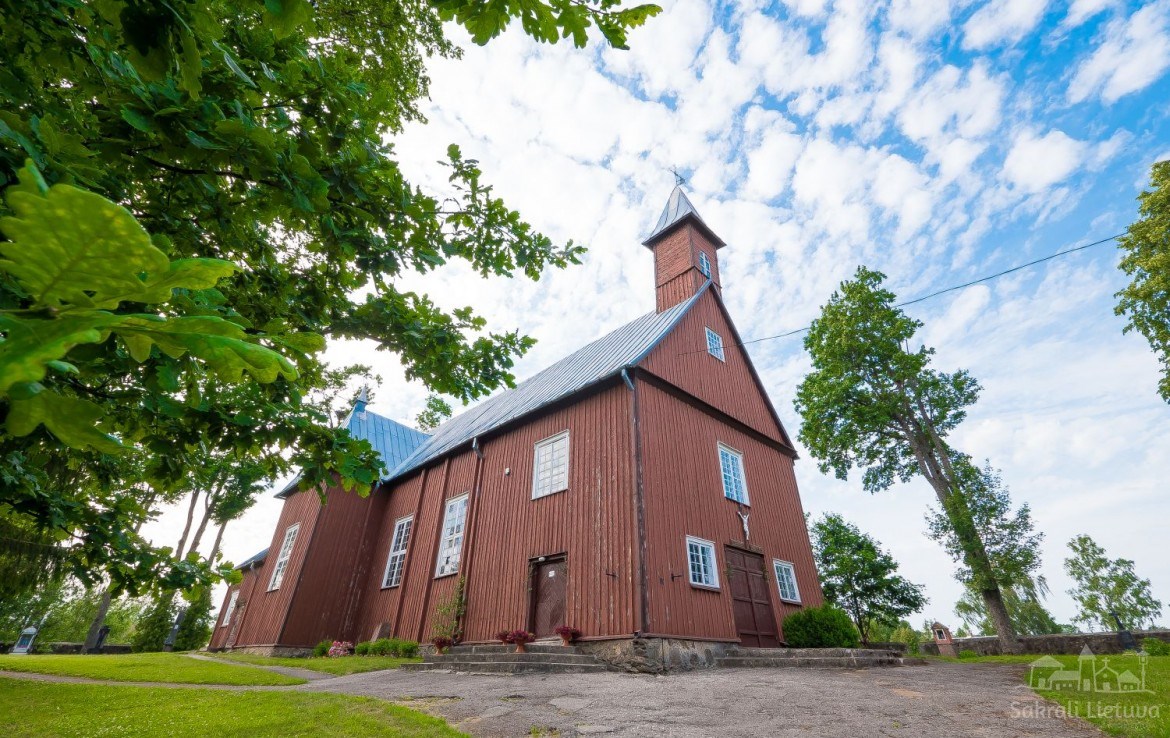 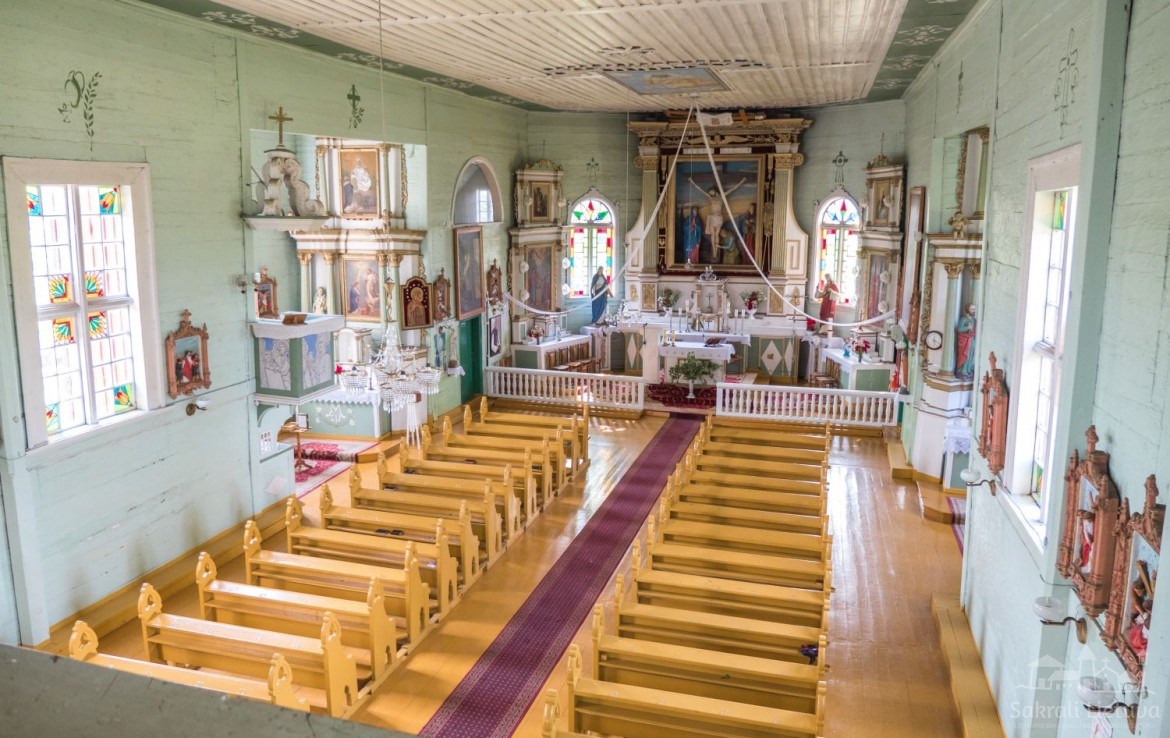 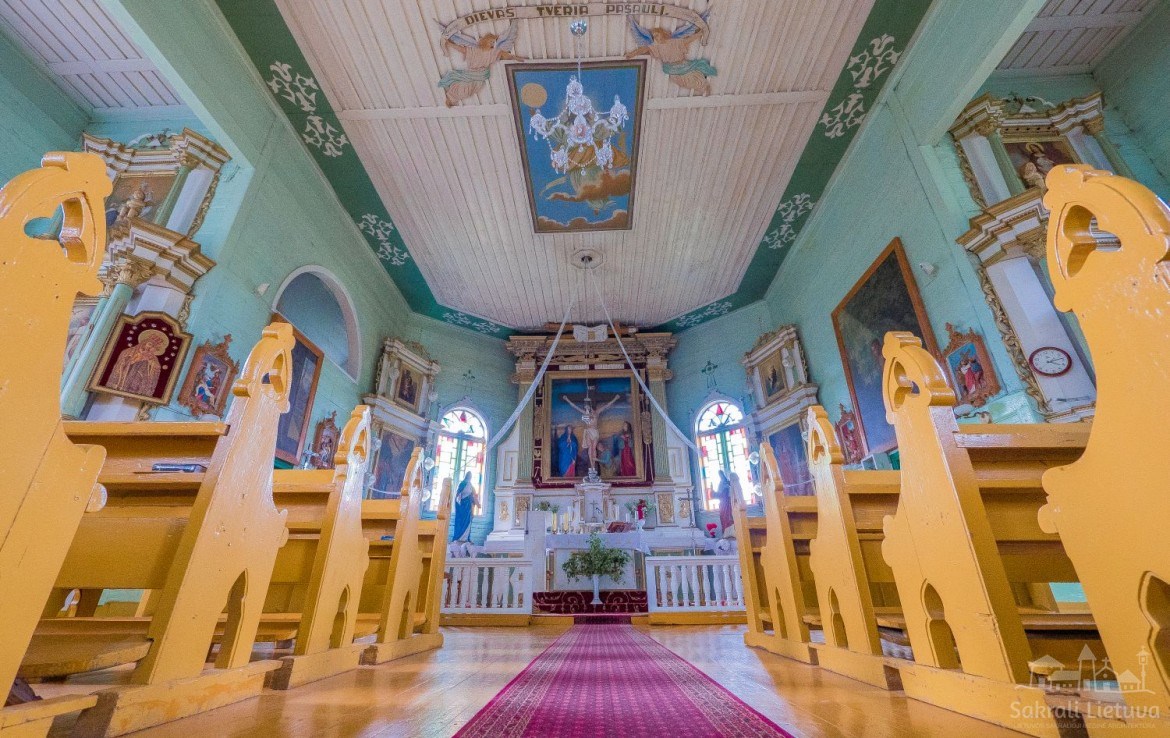 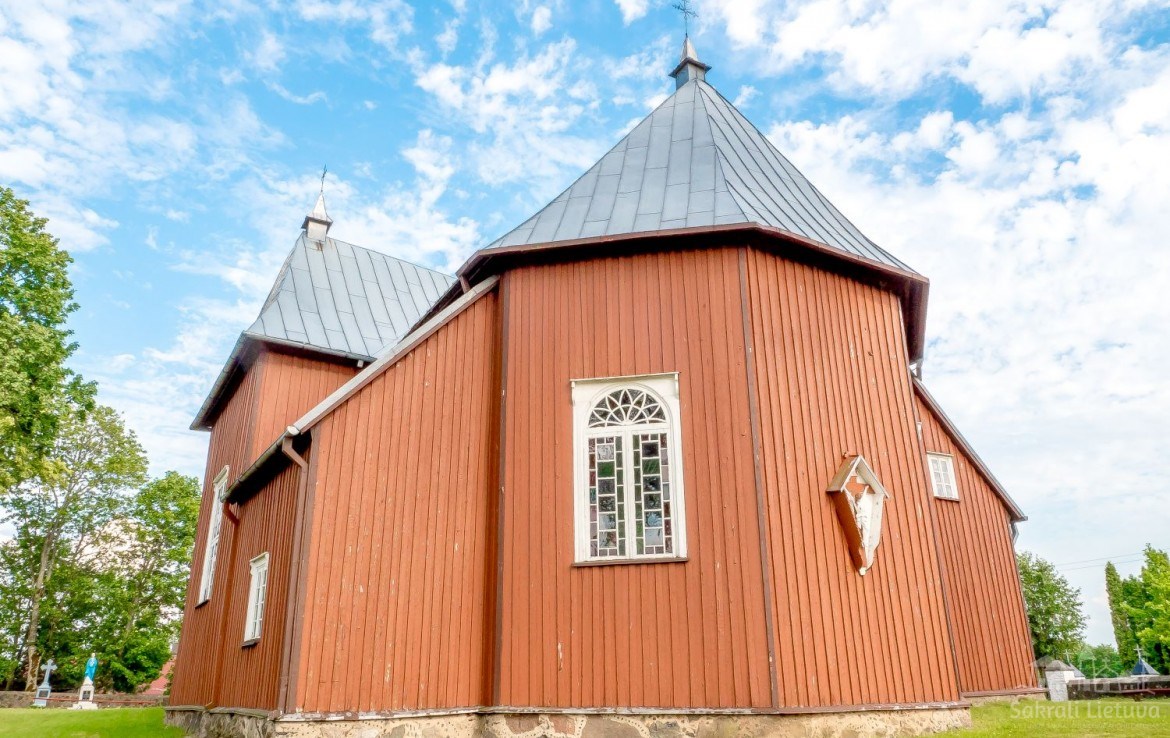 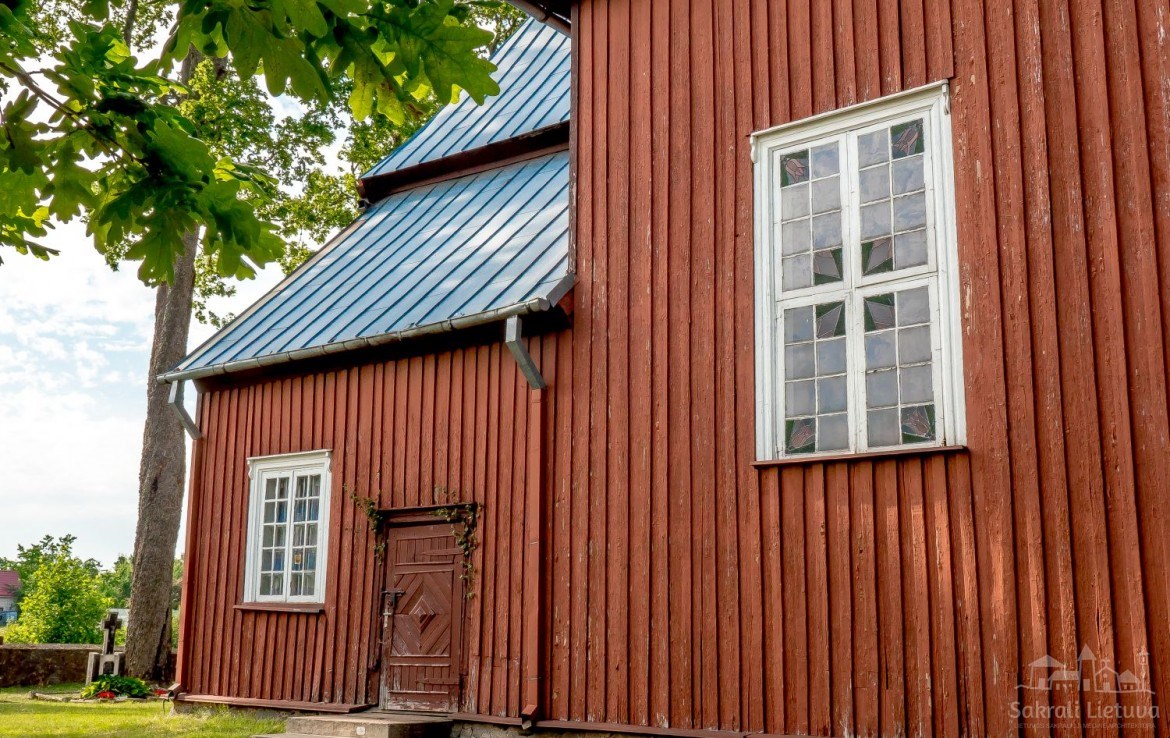 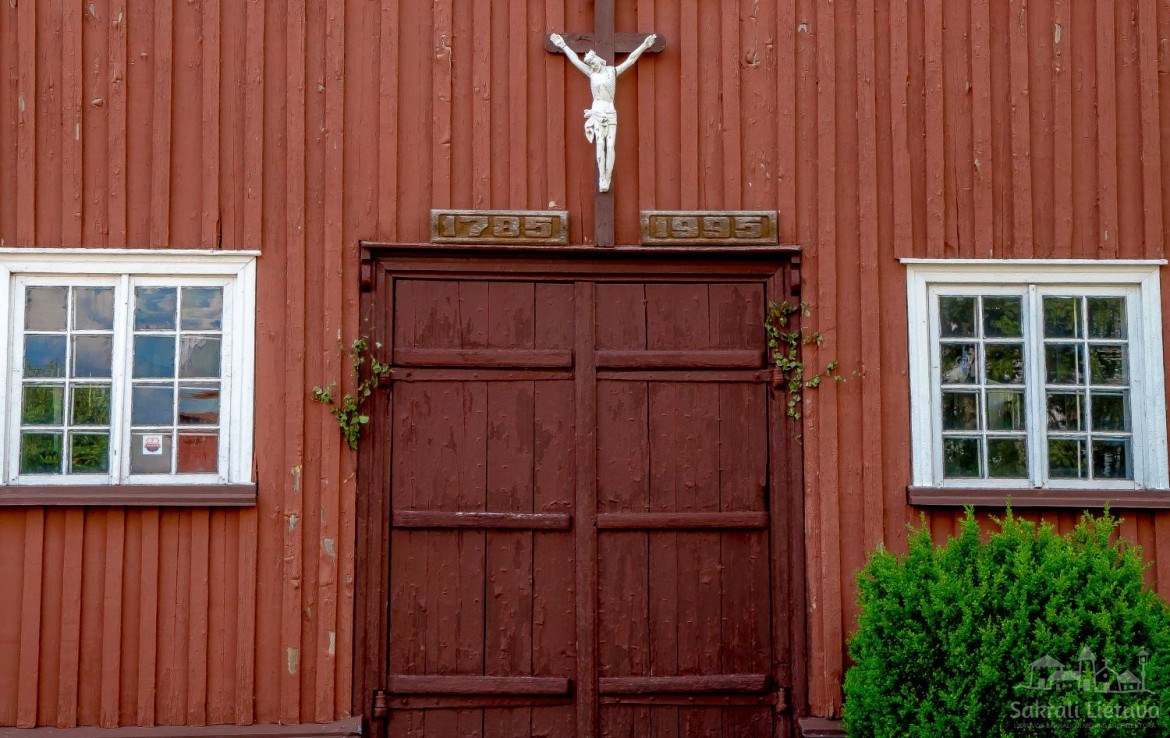 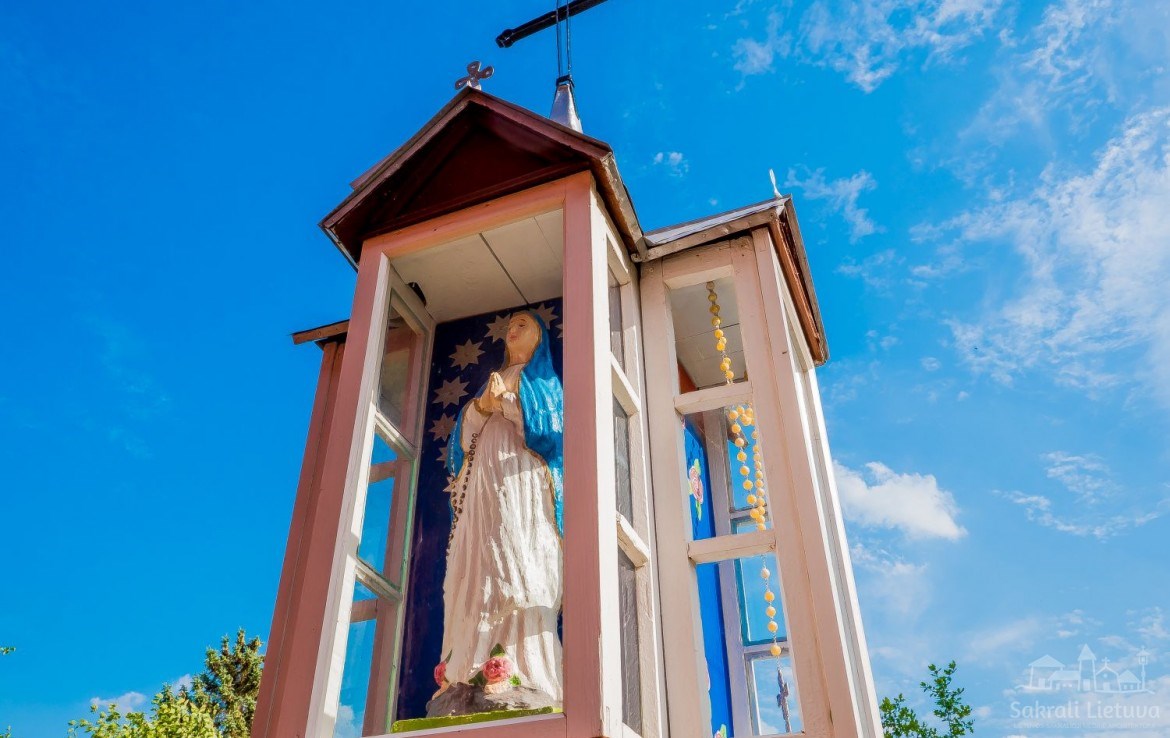 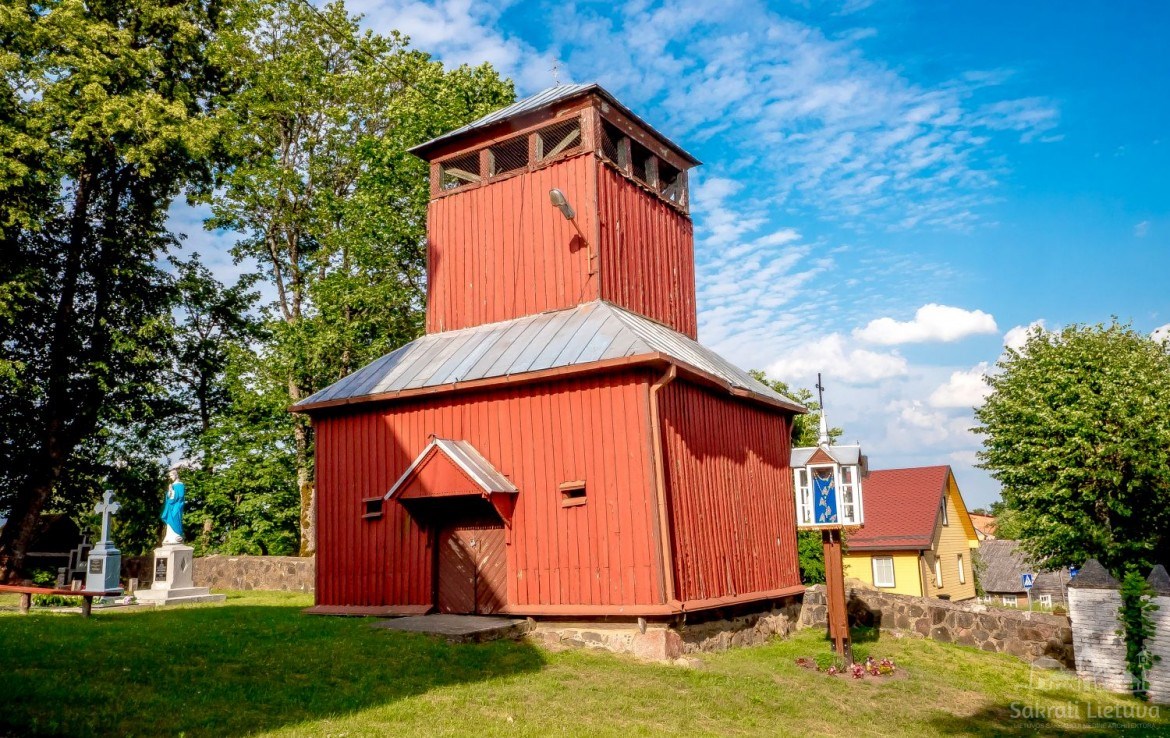 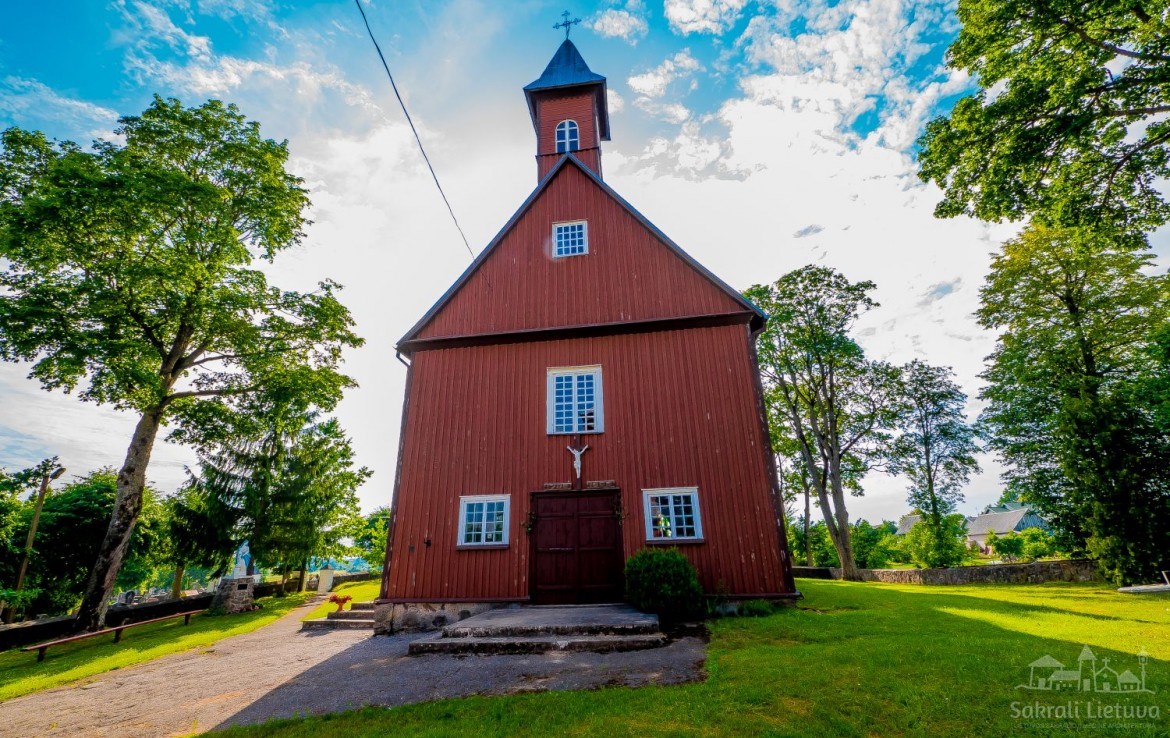 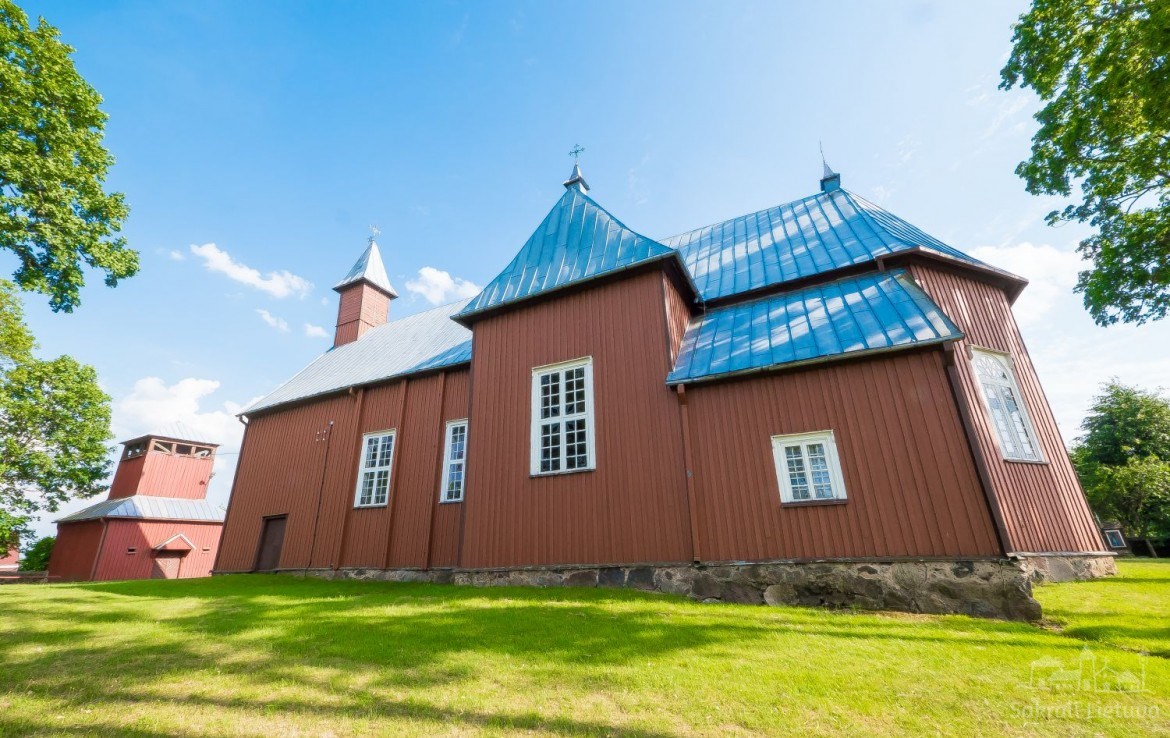 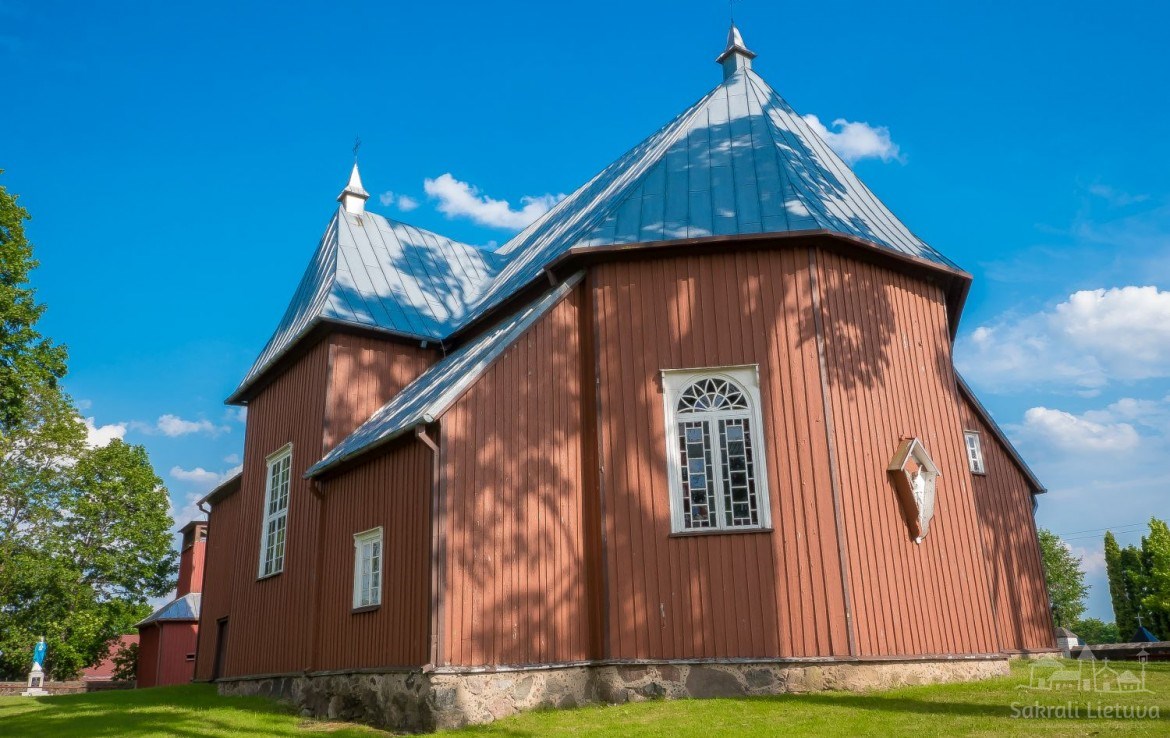 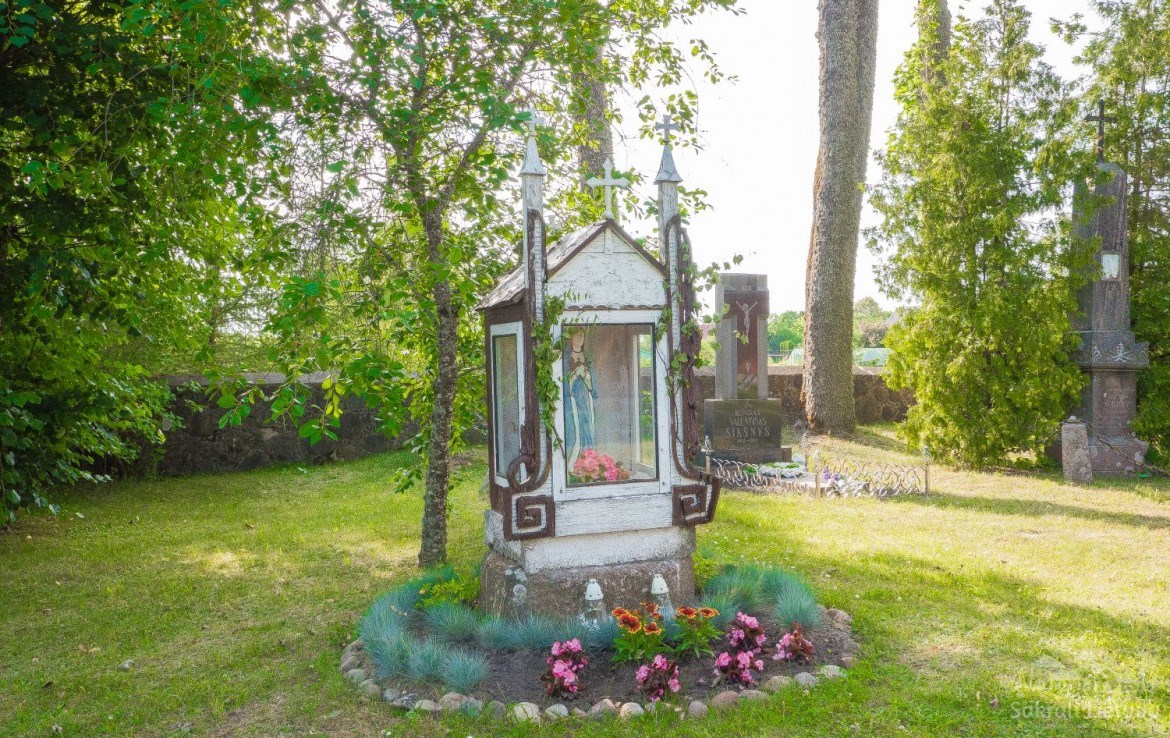 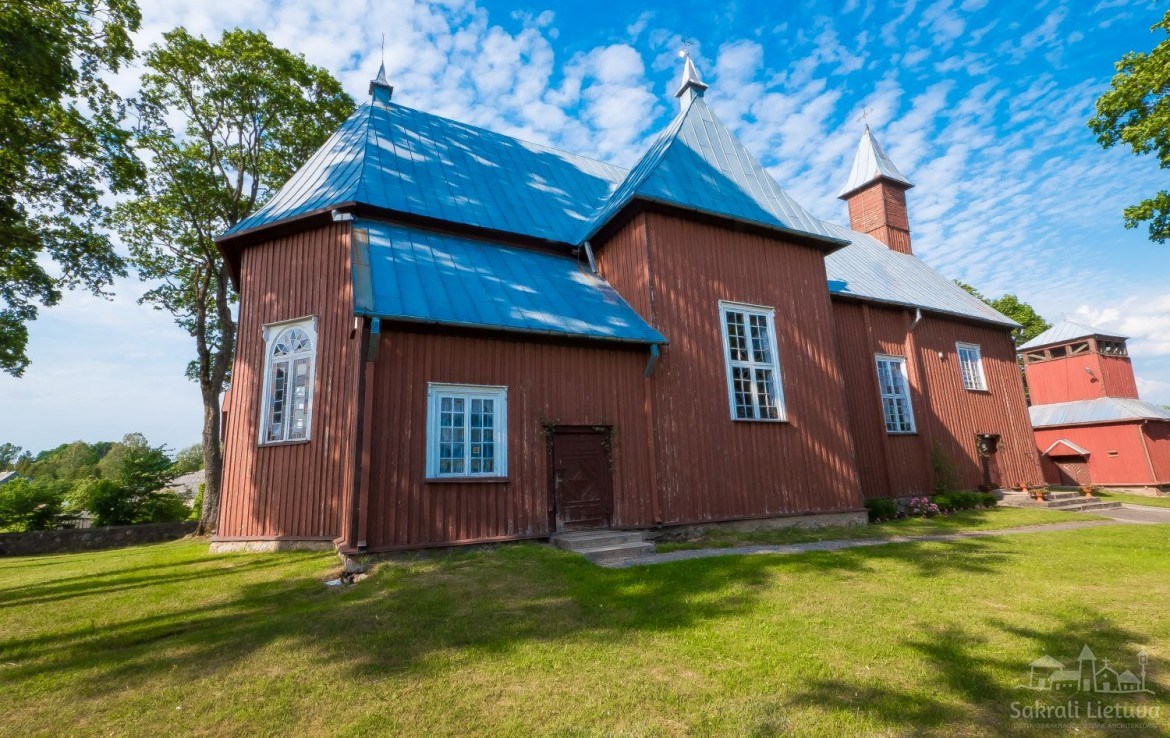 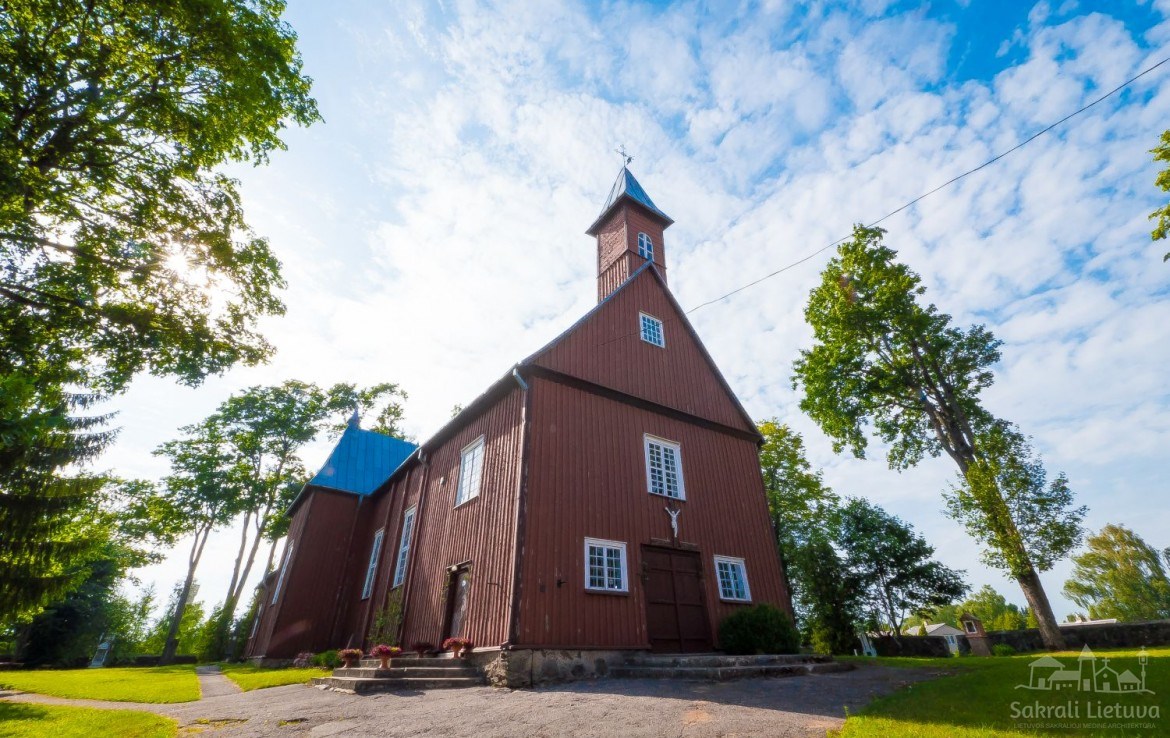 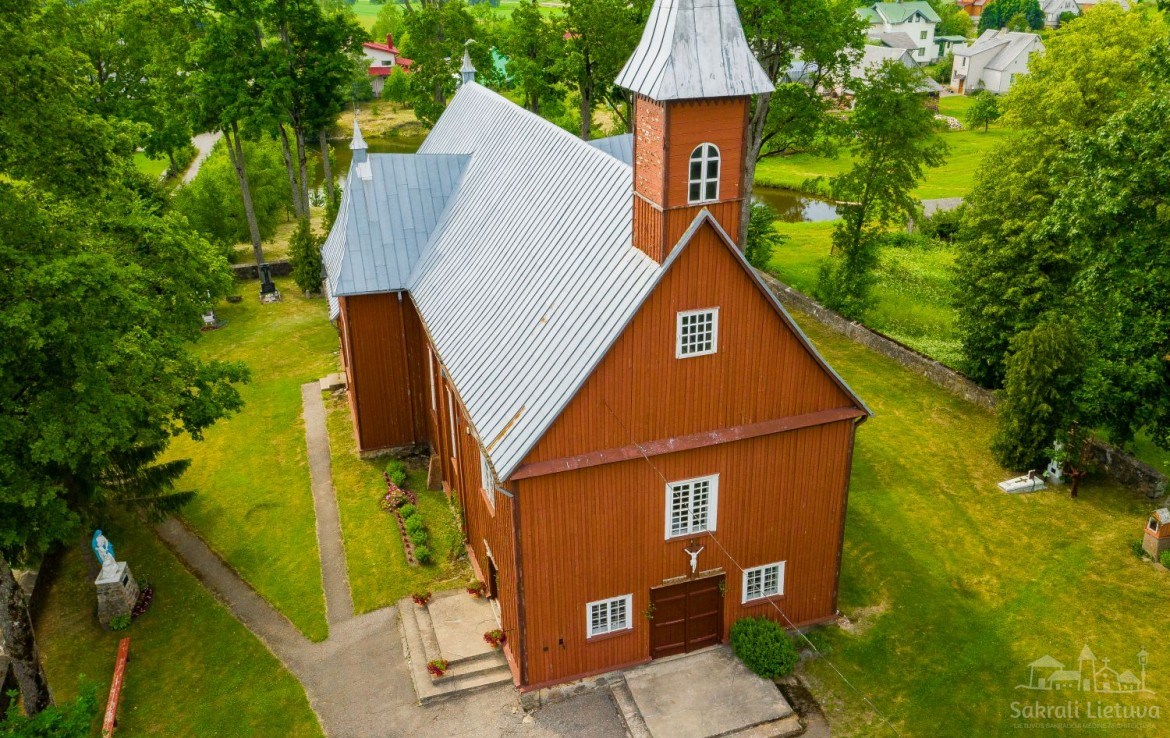 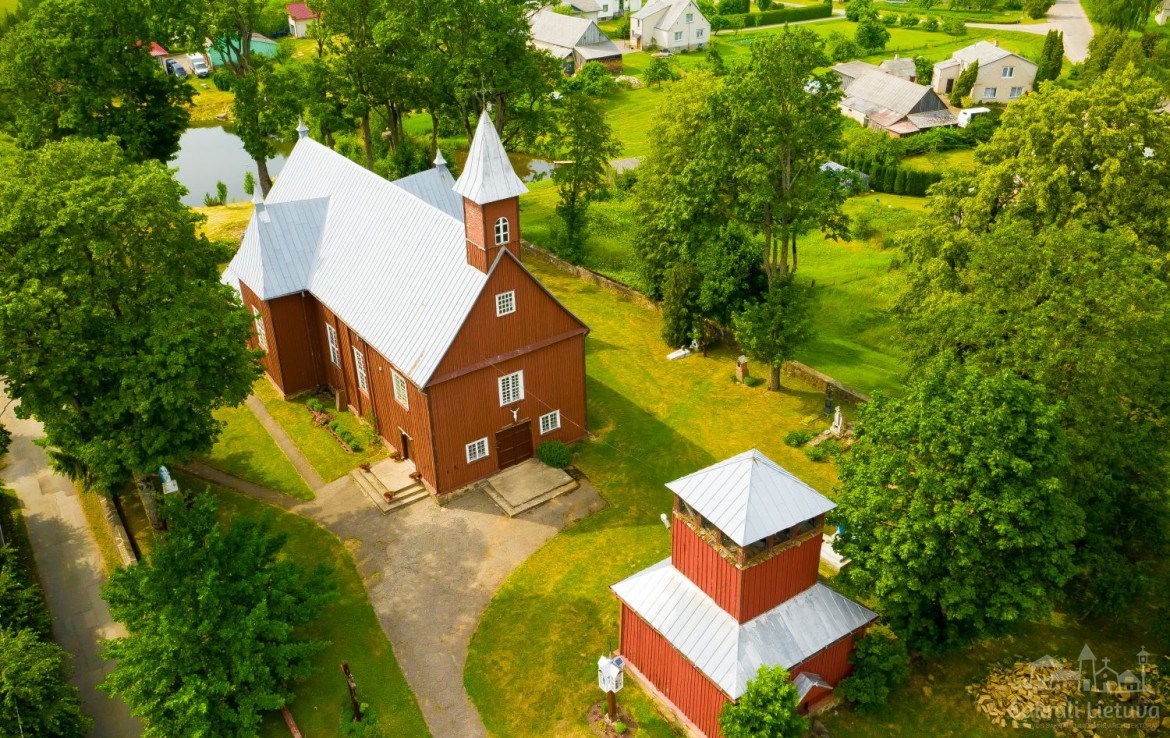