Church of St. Apostles Simon and Jude Thaddeus and Belfry

Church of Saints Simon and Jude Thaddeus the Apostles – is one of the oldest remaining wooden sacral buildings in Samogitia. The precise date of the foundation of the church in Lioliai is not known, however it is believed that it was done by brothers Martynas and Lukas Viekavičiai, under the initiative of which, the first church in Lioliai, by the name of St. Micheal, was built between 1517 and 1522. In the late 17th century or in the early 18th century the old church was newly rebuilt.

The current house of prayer of the town was built in 1768 and it was granted a title popular in Samogitia – Saints Simon and Jude Thaddeus the Apostles. In the late 18th century, the grand altar was replaced and a pulpit, decorated with carvings, was installed. The church has not seen any significant reconstructions up until the middle of the 19th century and only in 1851, thanks to the hardworking, long-time priest Vladislavas Lukauskis, the dilapidated church was urgently repaired. A high, octagonal, tower of two narrowing sections, with arched openings and an onion dome was built in the cross-section of the central nave and the lateral chapels. The roof was coated with shingles the right sacristy was added. The interior of the church was also repaired. It was after this reconstruction that the church acquired its current appearance.

The church is built on a low foundation of stone masonry, is of three-nave with a wide central nave higher than the side and two lateral, intersecting chapels. The lateral naves are much narrower and a little lower – this creates and impression of pseudo-basilica. The presbytery, which is of the same size as the central nave, is completed with a triple apse. Sacristies of different size are adjacent on both sides of the presbytery. The roof is gabbling, gambrel with single-sloping roofs of the lateral naves. On the edges of the ridges – four small turrets reminiscent of the grand tower. The façades of the church are not decorative, cladded vertically with slats. The portal of the main façade is surrounded by a porch with a slanted canopy. The doors are cladded with a rhombus pattern with massive hinges. The windows are rectangular, finely split, the ones in the chapels and naves are with a slightly curved top part. The apse is decorated with a round dormer window and under it – the sculpture of the crucifix.

Baroque style is dominant in the interior. One of the most valuable objects is the grand altar of the late Baroque, created in late 18th century, reflecting a three-section composition with a sculptural pediment and abundant carvings typical of that period. Over the same period, the ornate pulpit was created, above which a pelican feeding its own children with its blood is depicted – it is a symbol of Christ’s redemption. The organs of the church, manufactured in the Eastern Prussia, are also of high value. The prospect of the organs is richly decorated with Baroque and Classicistic details.

Not only is the Lioliai church exceptional, but the monumental belfry with bells cast in the 18th century. Built in 1875, on a high stone masonry plinth with a narrower middle part and a widened upper part. In the third section, there are two paired acoustic openings with segment arches. Because of its shape the belfry reminds of a stylised defence tower. This is a non-traditional and unusual solution in the Lithuanian sacral architecture. The churchyard is surrounded by a low stone masonry fence with a red brick gate. 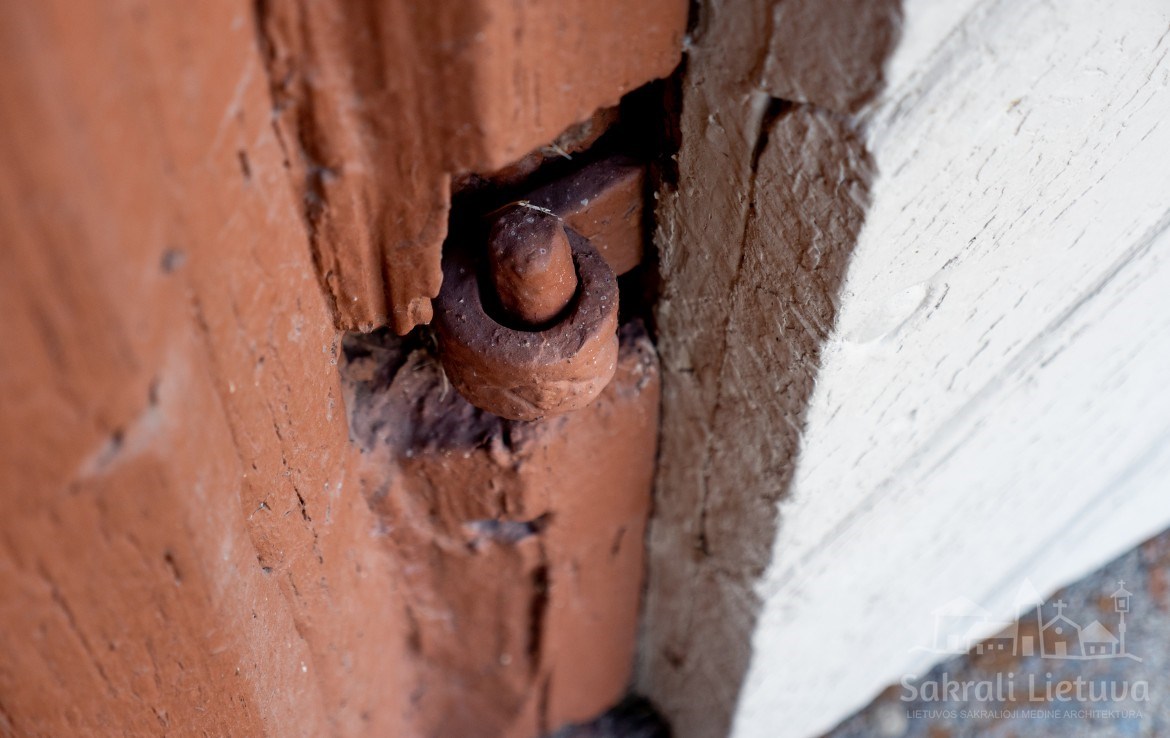 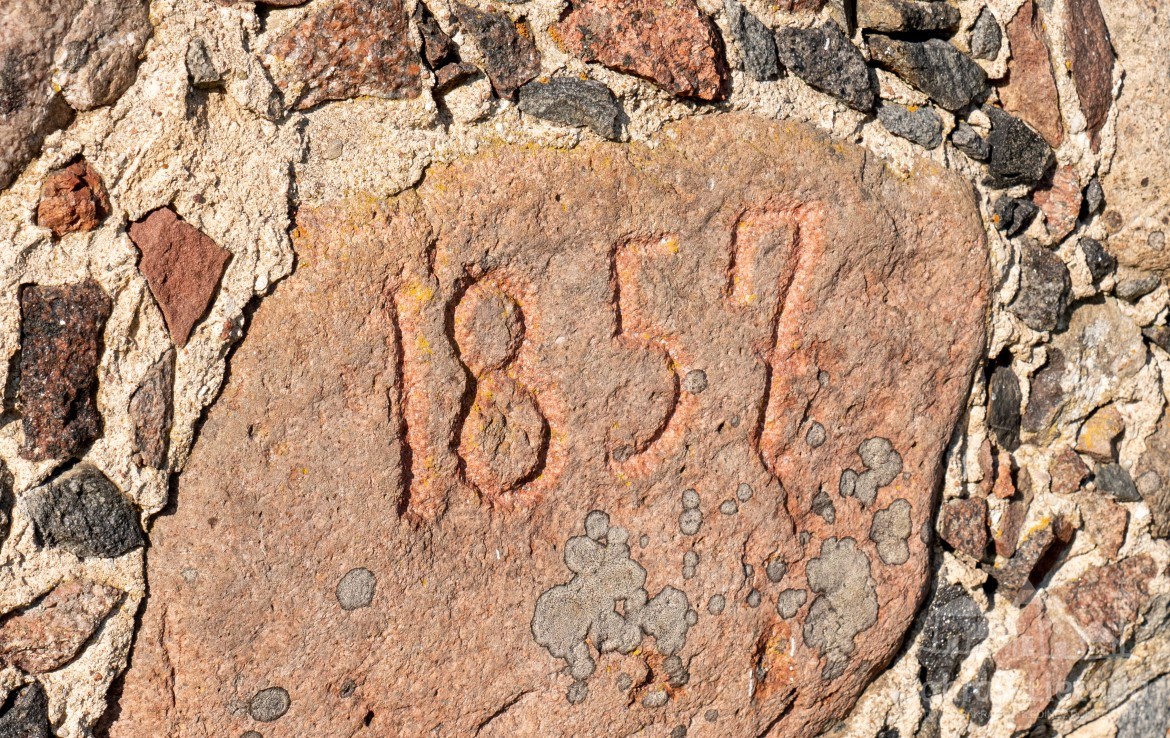 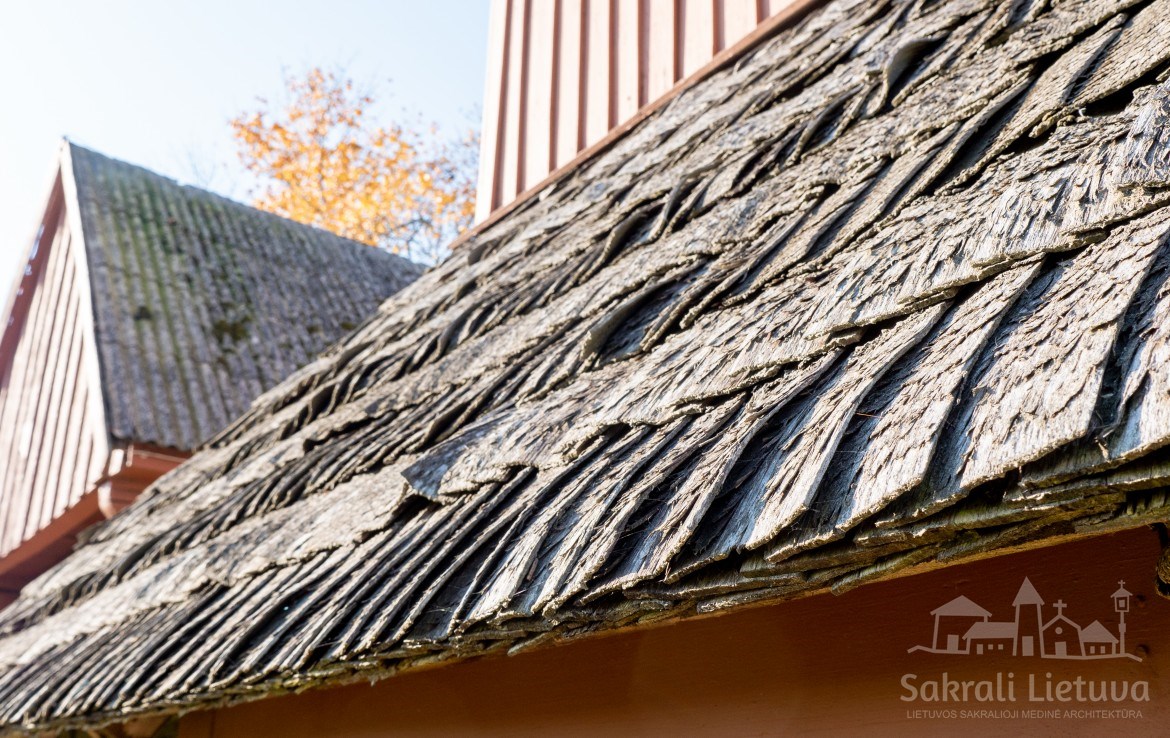 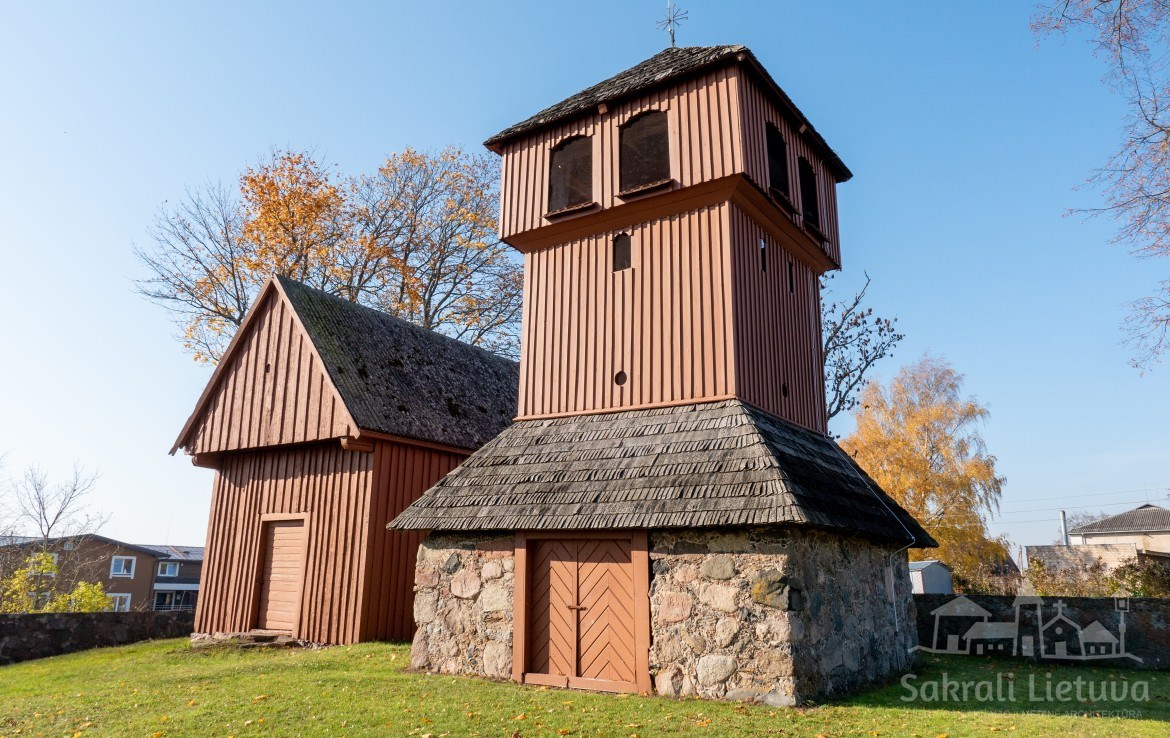 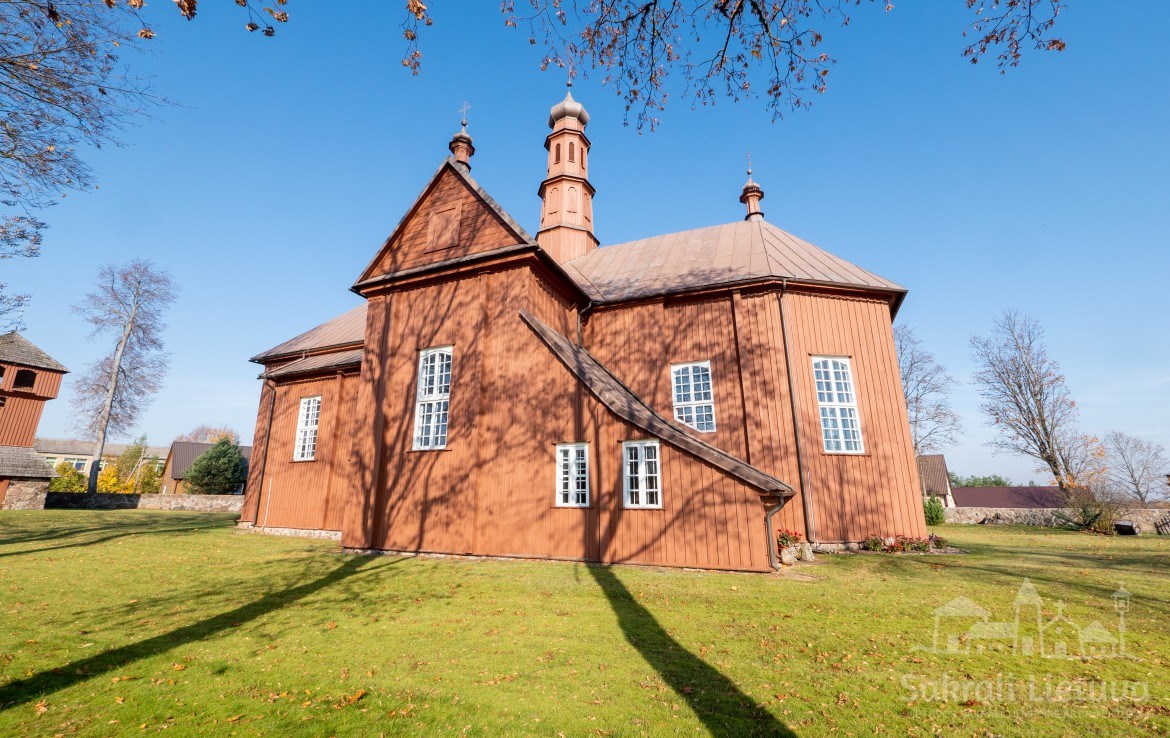 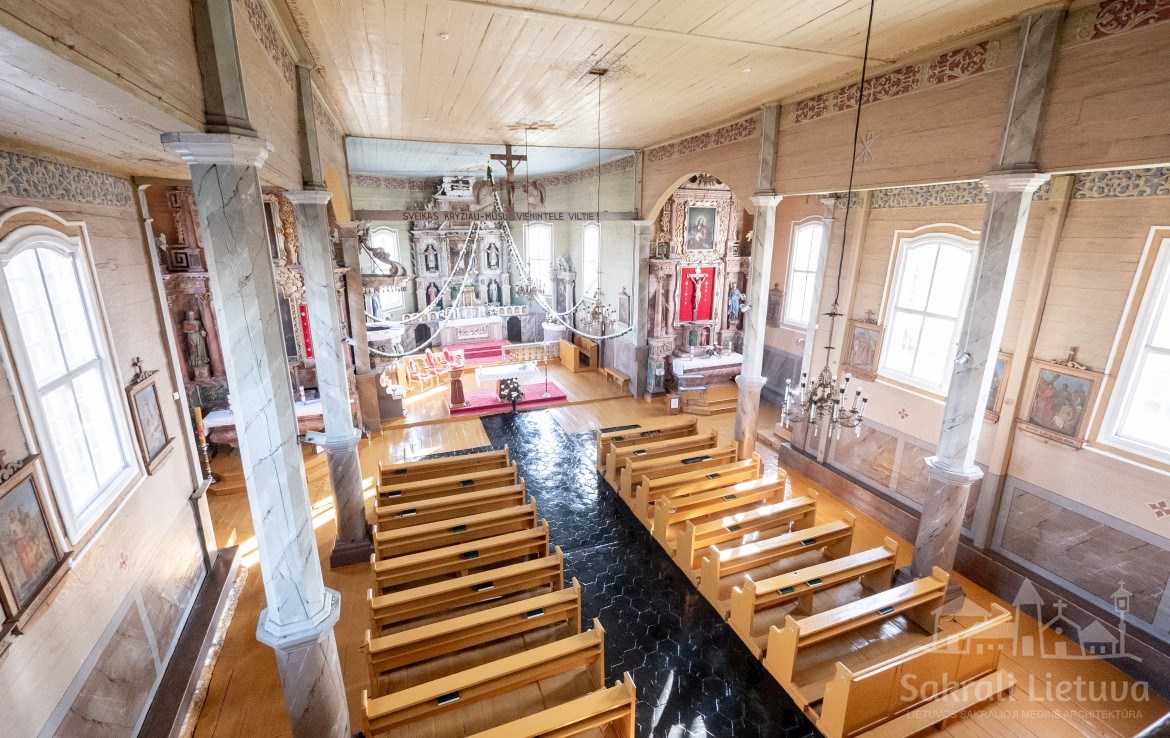 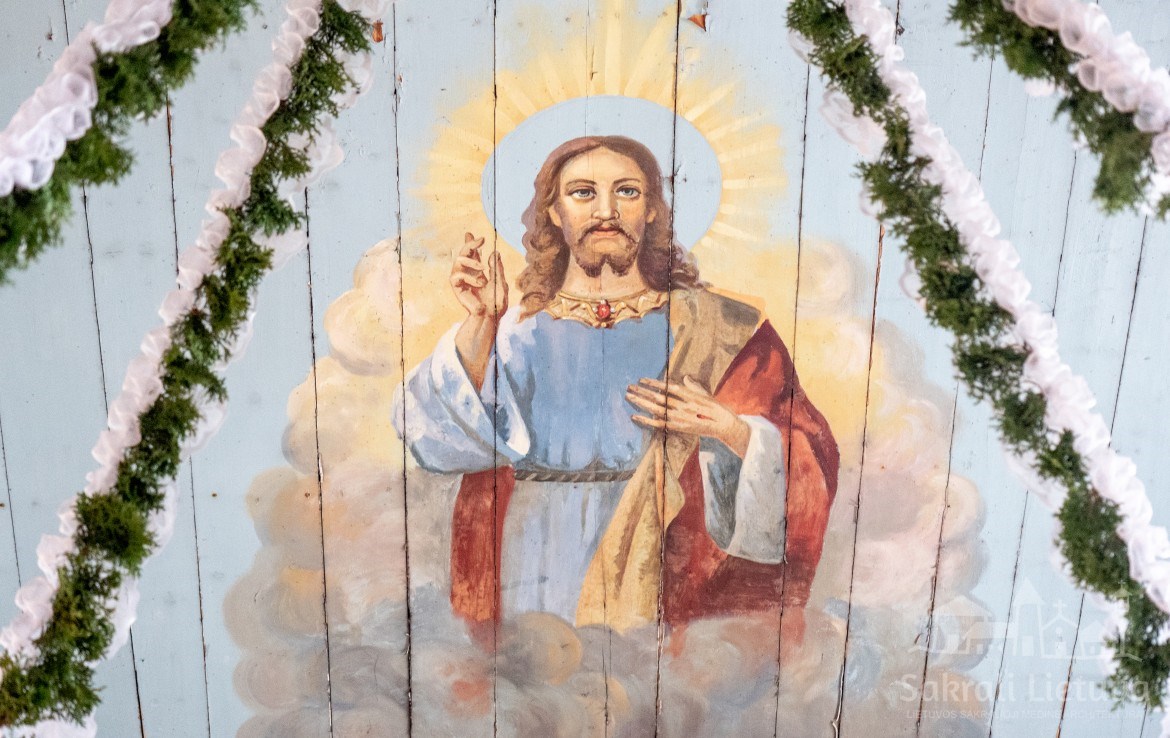 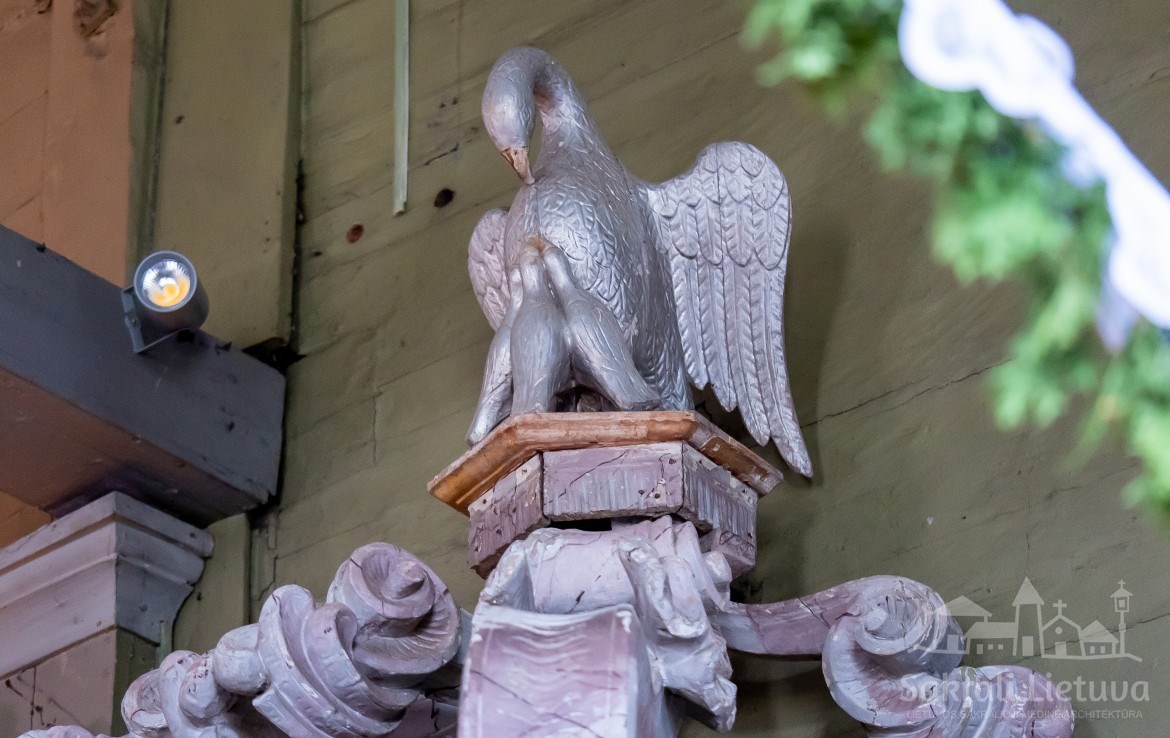 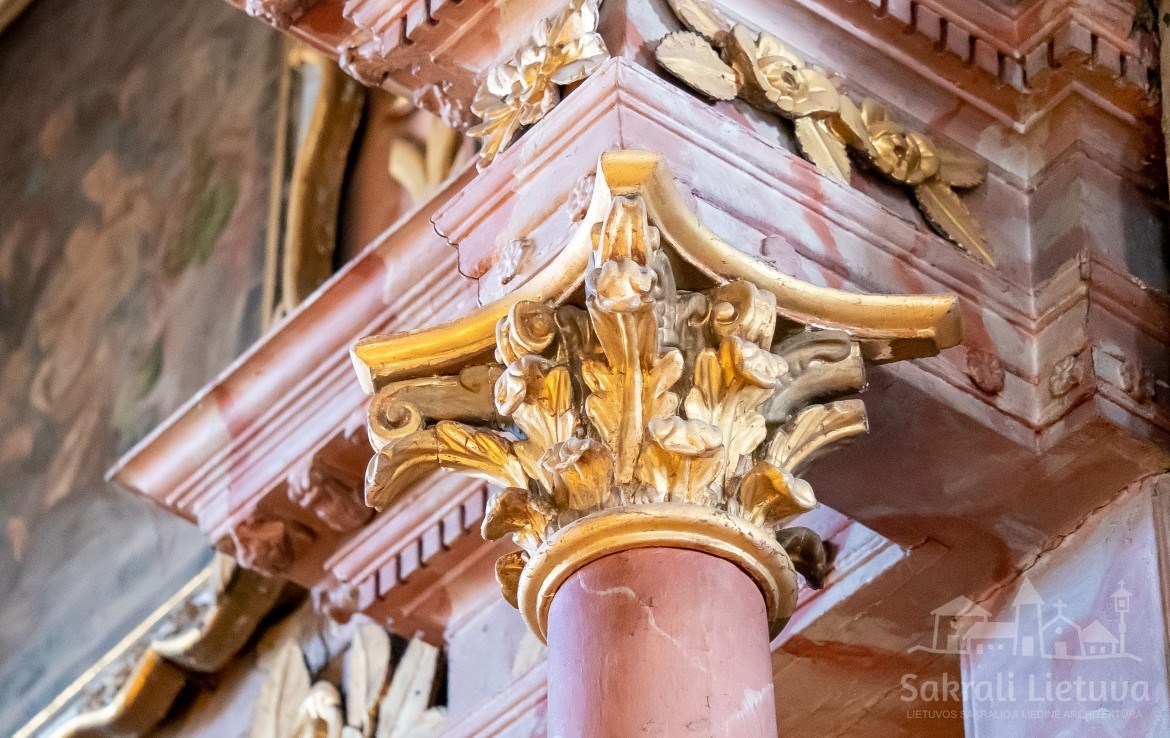 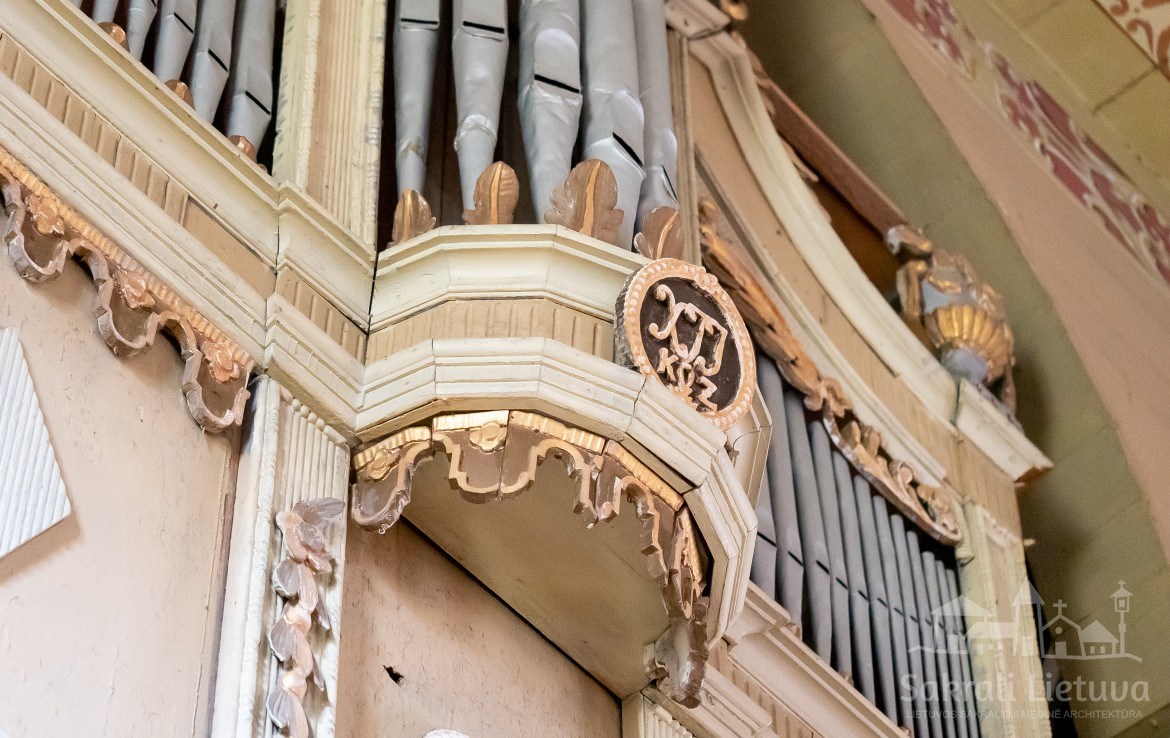 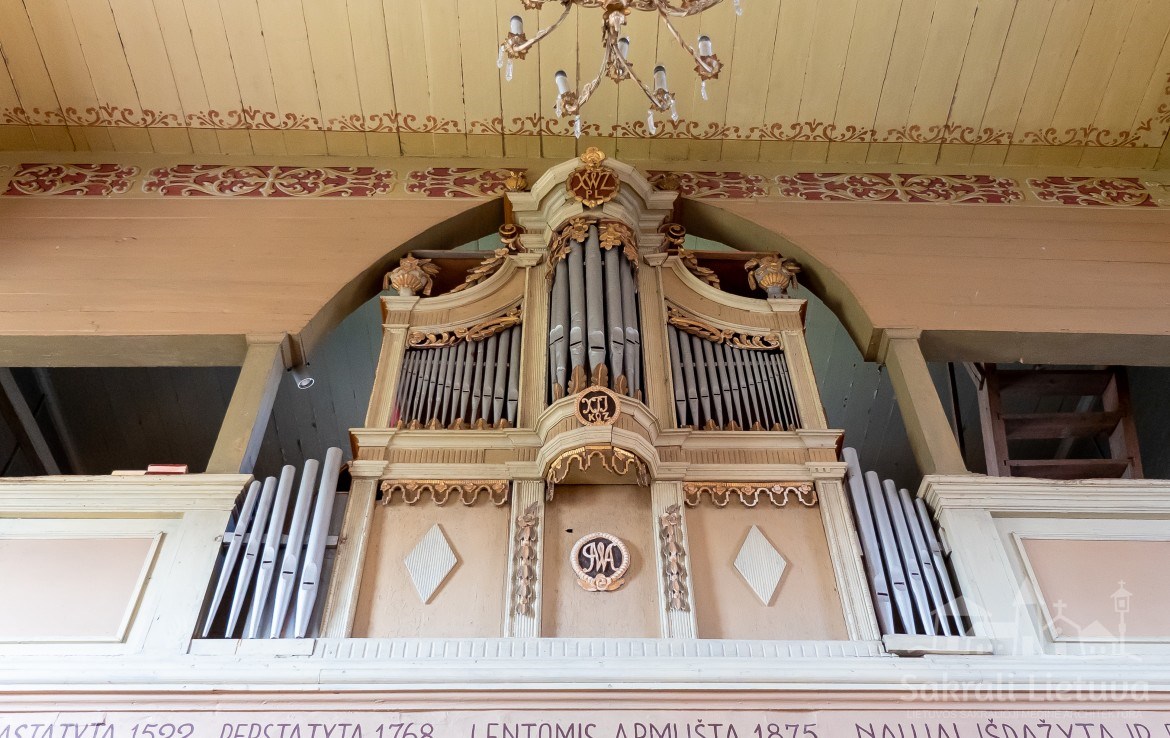 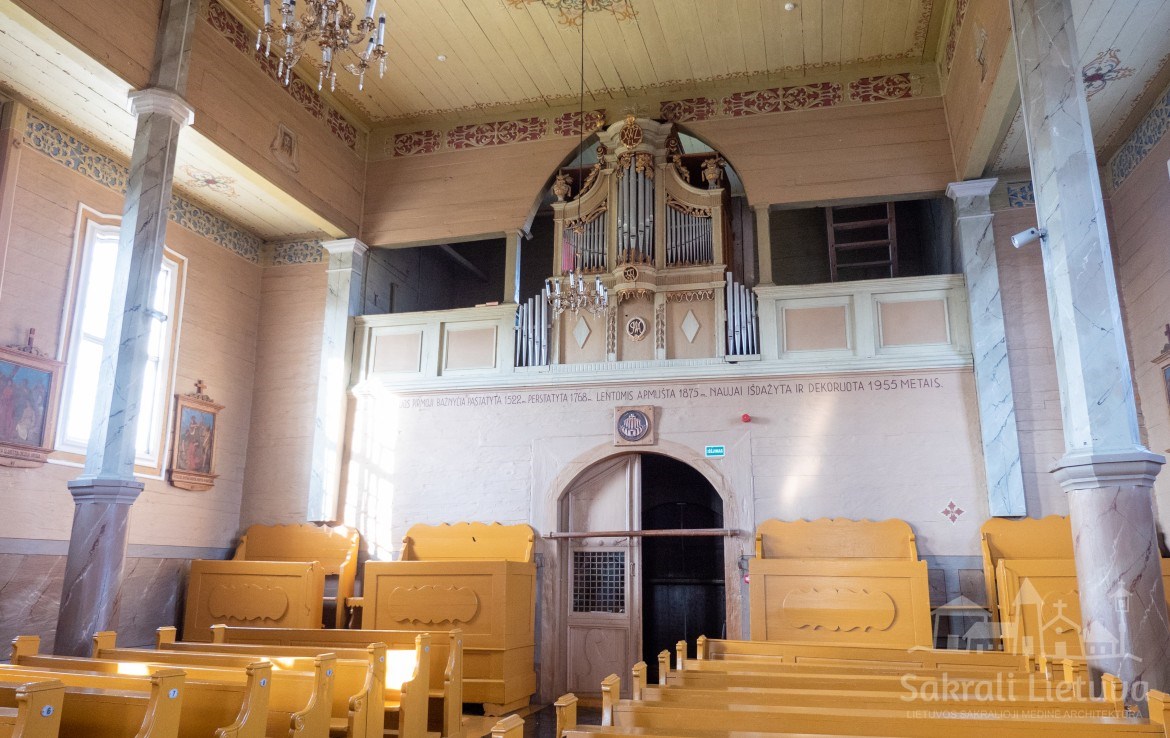 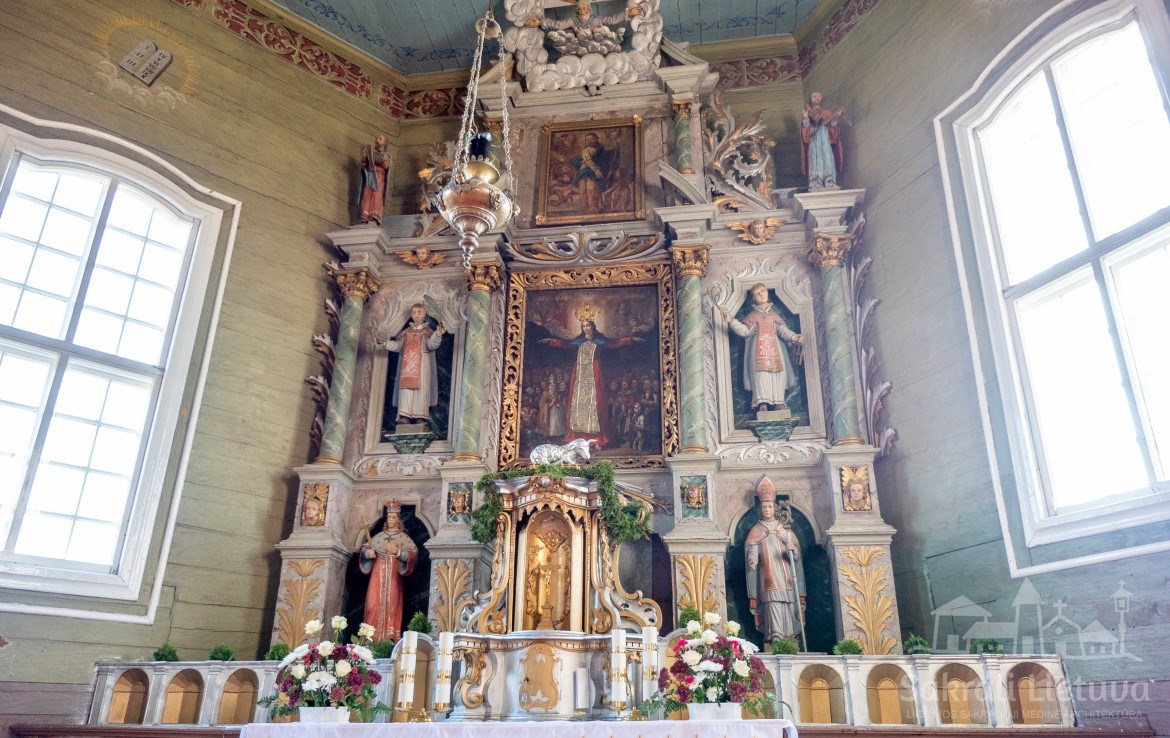 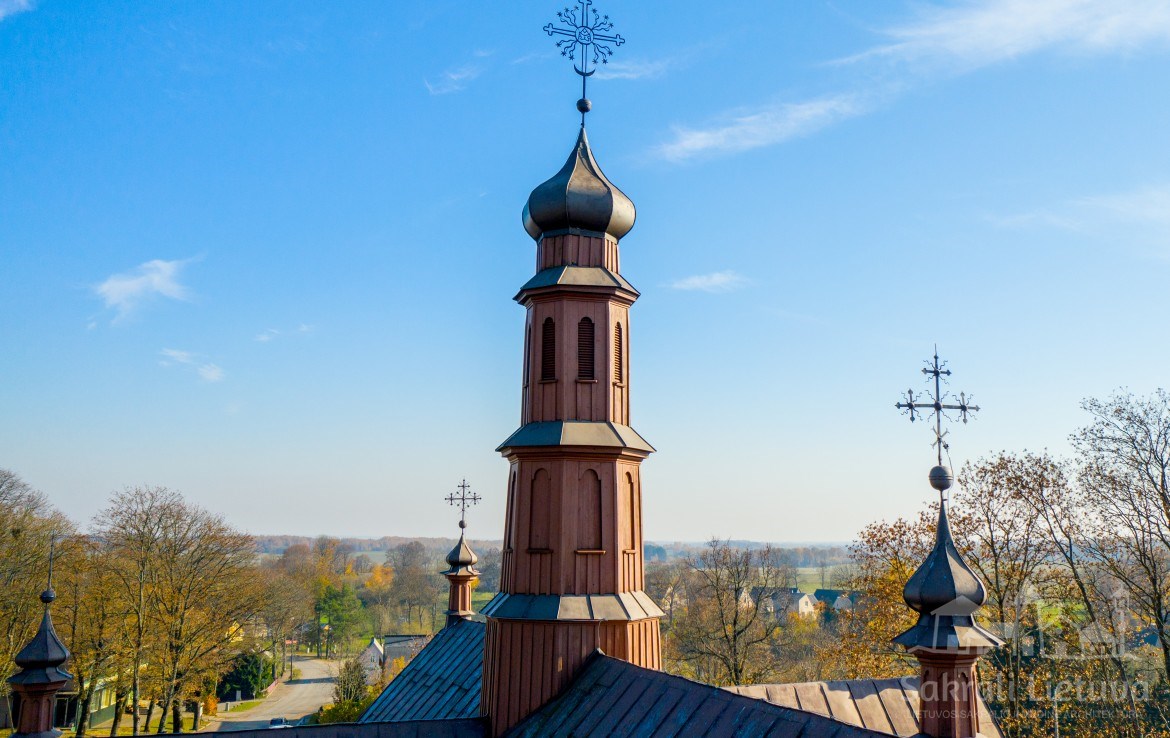 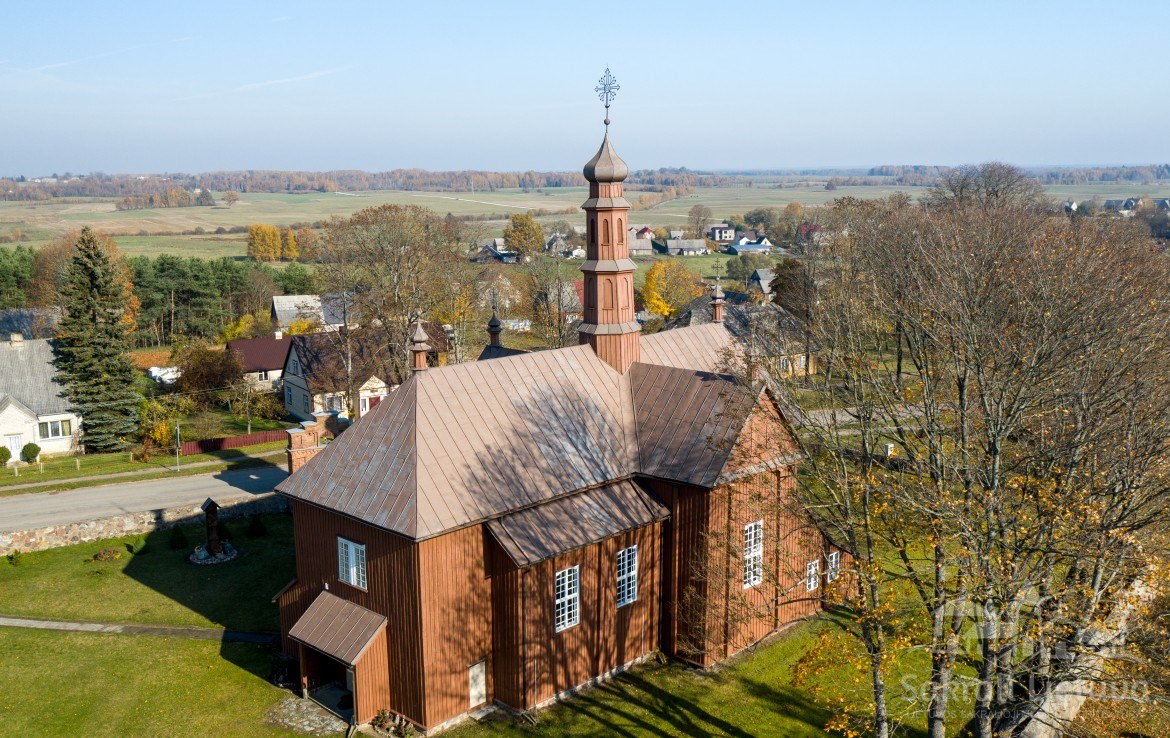 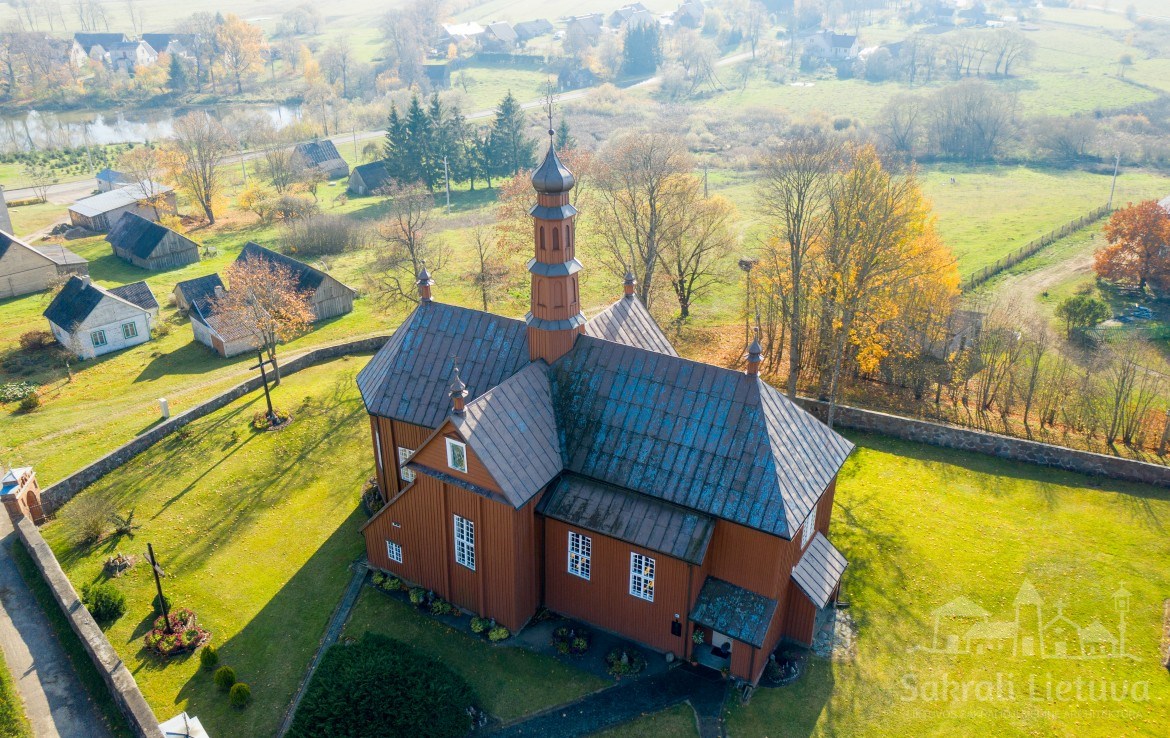