The history of St. Archangel Michael Church in Kaimelis is inseparable from the first chapel of Kiduliai manor built in 1636. Kiduliai manor was governed by two Samogitian bishops, J. J. Krispinas Kiršteinas and A. D. Tiškevičius. At the beginning of the 19th century, Kiduliai Chapel was already in a very poor condition, so the present church of Kaimelis was built to the east of the old chapel location in 1839. The construction was funded by the owner of the manor Benediktas Tiškevičius. In 1885, the church named after St. Archangel Michael was consecrated by the Suffragan Bishop of Seinai, Juozapas Oleka. The village acquired the parish status after World War I. The church was reconstructed at the beginning of the 20th century, and restored in 2007-2009.

The church is of a rectangular layout and has three naves with sacristies extending the lateral nave spaces, and a tower on the main facade. The two-section tower, tapering upwards, emerges from the trapezoidal pediment of the main facade. The first section is massive, of a quadrangular base, the second – of an octagonal base with a small, high, pointed roof covered with sheet steel and topped with a cross. A small decorative, open octagonal turret with a roof supported by eight columns and topped with a cross is above the presbytery. The corners of the main facade roof and the first tower section are decorated with primitively shaped pinnacles of a quadrangular base. The facades are boarded vertically, the window and door openings are rectangular, and the pediment has a semicircular skylight.

Inside, the lateral naves are separated by two rows of pillars of a rectangular base. The church has three altars: the great altar of the Most Sacred Heart of Jesus, with the niche sculptures of the Most Sacred Heart of Jesus, St. Peter, St. Paul and the picture “The Most Blessed Virgin Mary’s Immaculate Conception” with two angel sculptures. The left nave has the altar of the Visitation of the Most Blessed Virgin Mary, and the right nave – the altar of St. John of Nepomuk on the first section and that of St. George on the second section.

The belfry was built in the second half of the 19th century, and like the church it was restored in 2007-2009. The building is low, massive, with two sections tapering upwards. The foundation is made of field stones, the walls are frame, boarded vertically with narrower planks on the joints. The eaves are decorated with profiled cornices. The first section, as is typical of traditional folk-style belfries, ends with a small roof, and the second – with a four-sided roof. The second stage includes sound holes – arched horizontal ones with wooden blinds in one facade, and rectangular, closed by double shutters in the other facade. 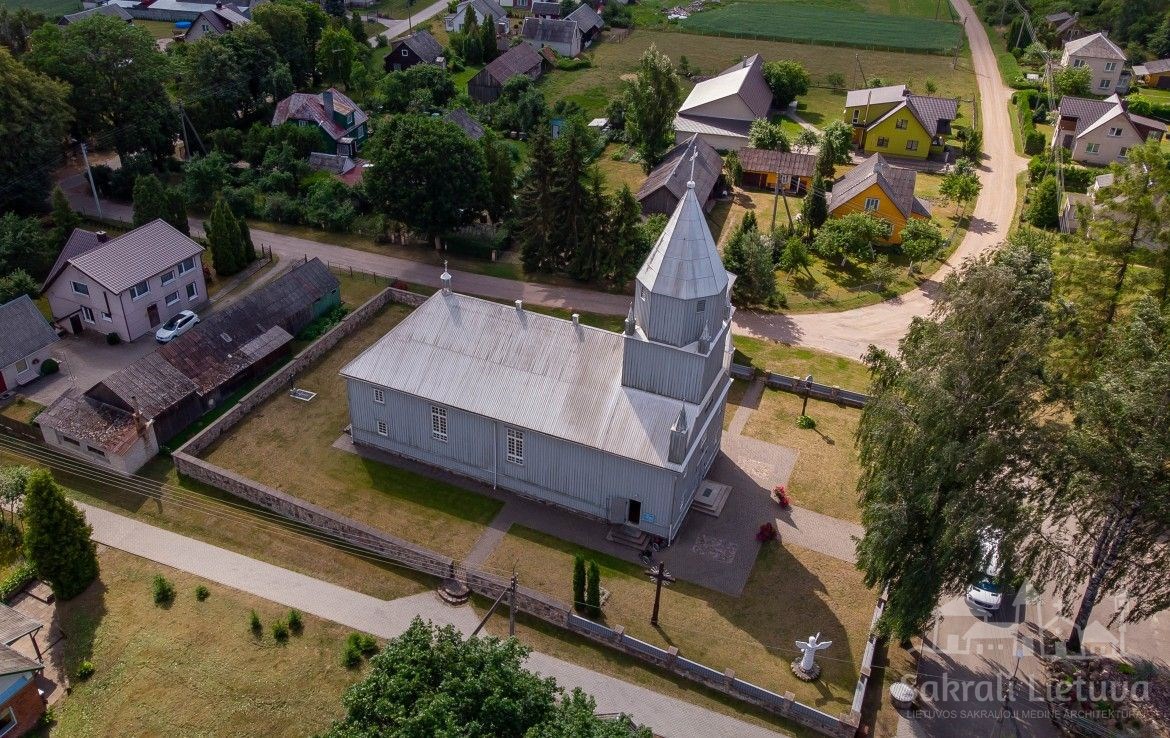 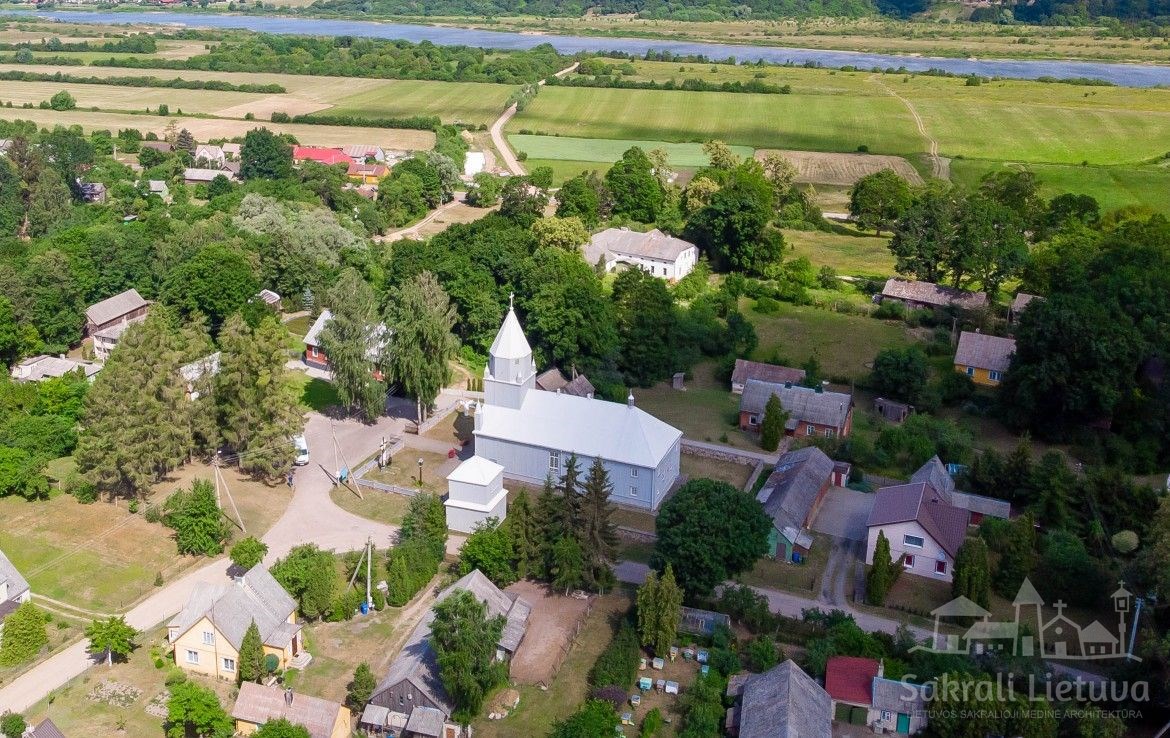 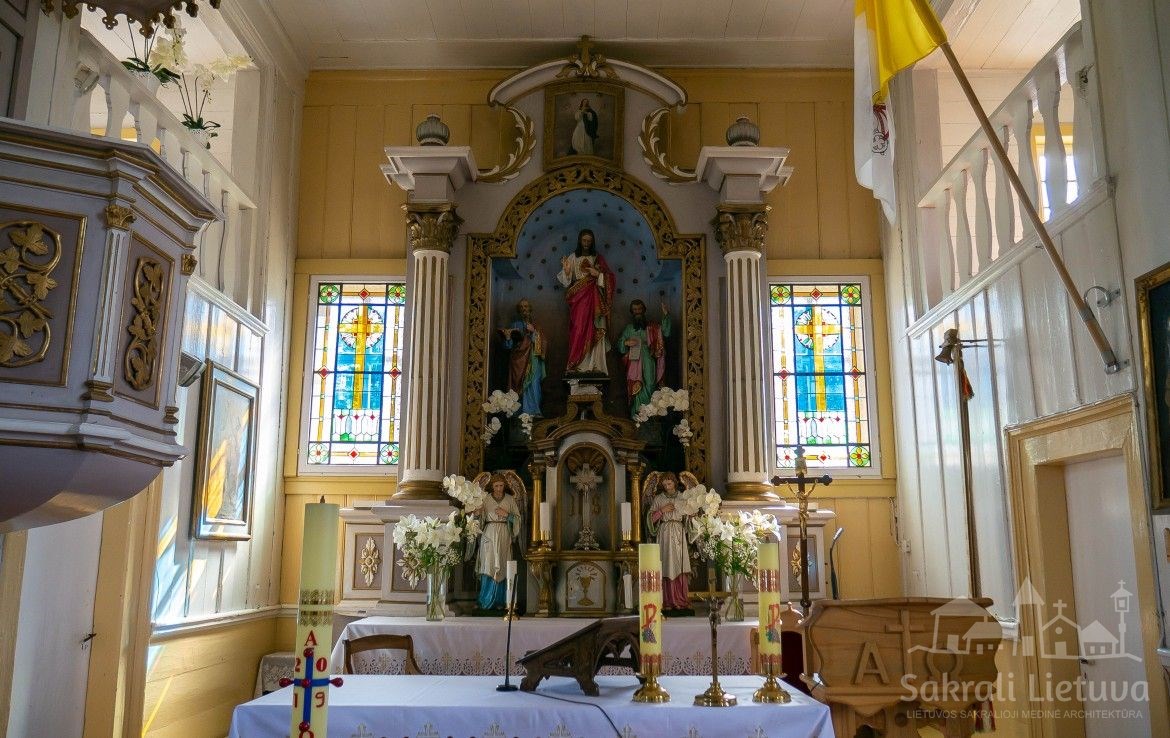 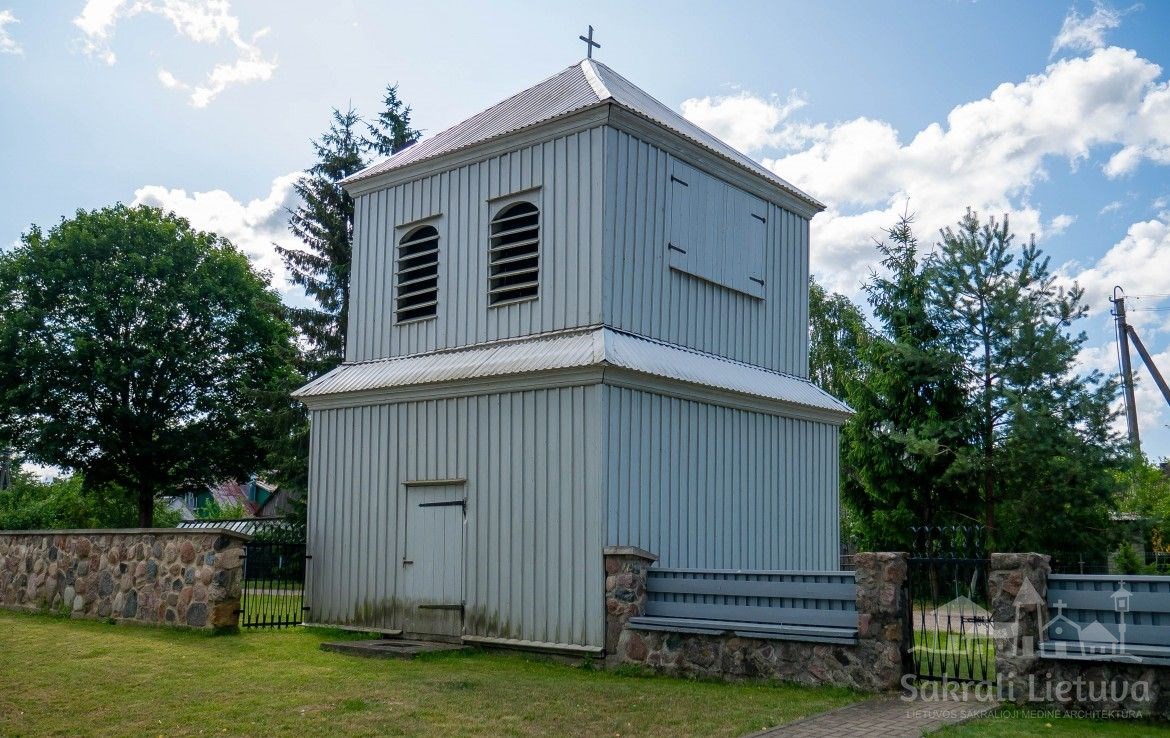 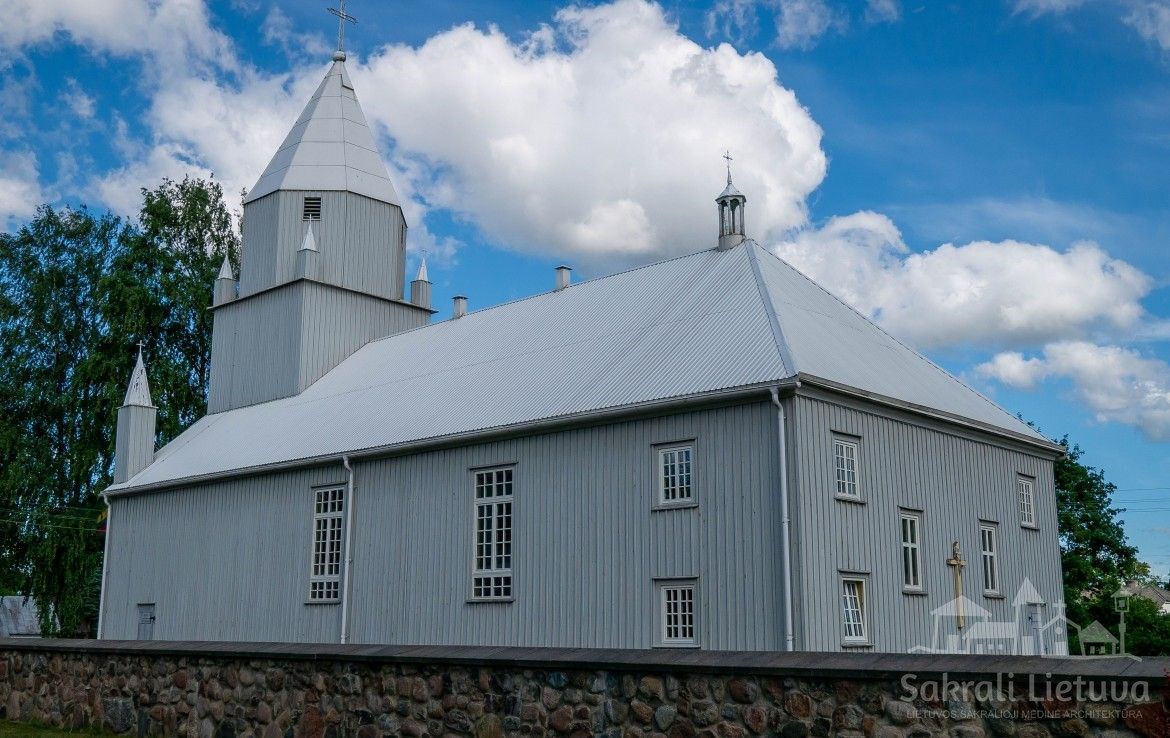 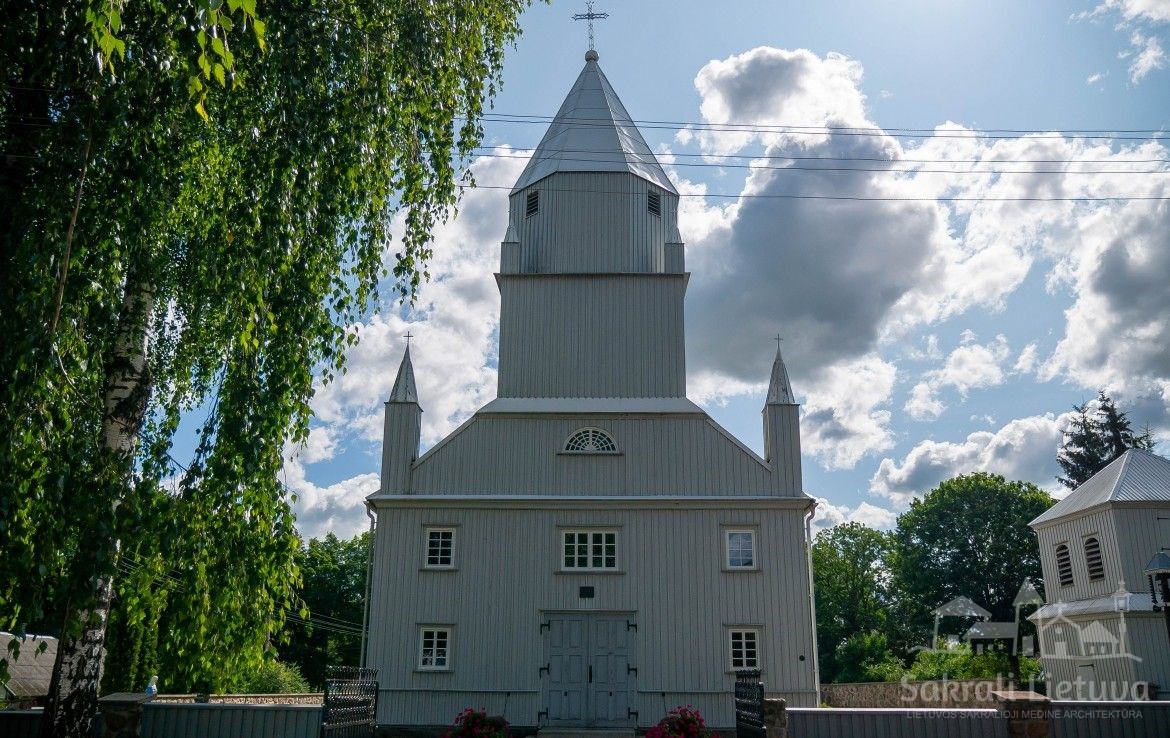 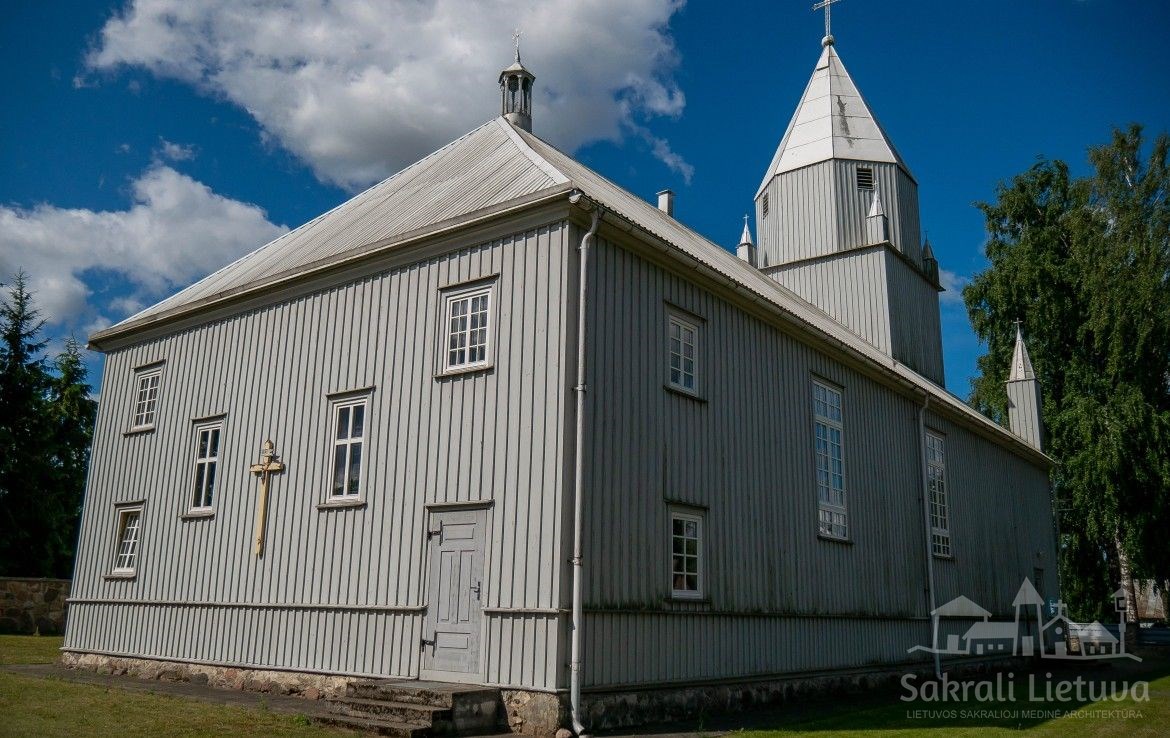 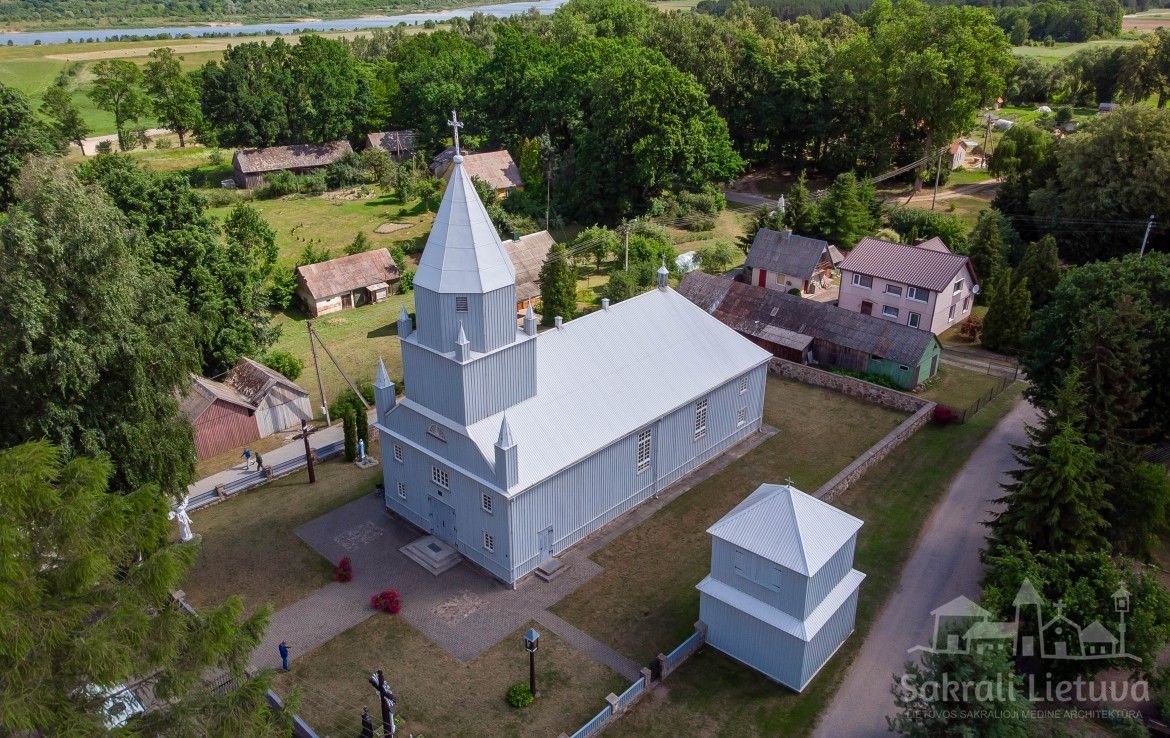 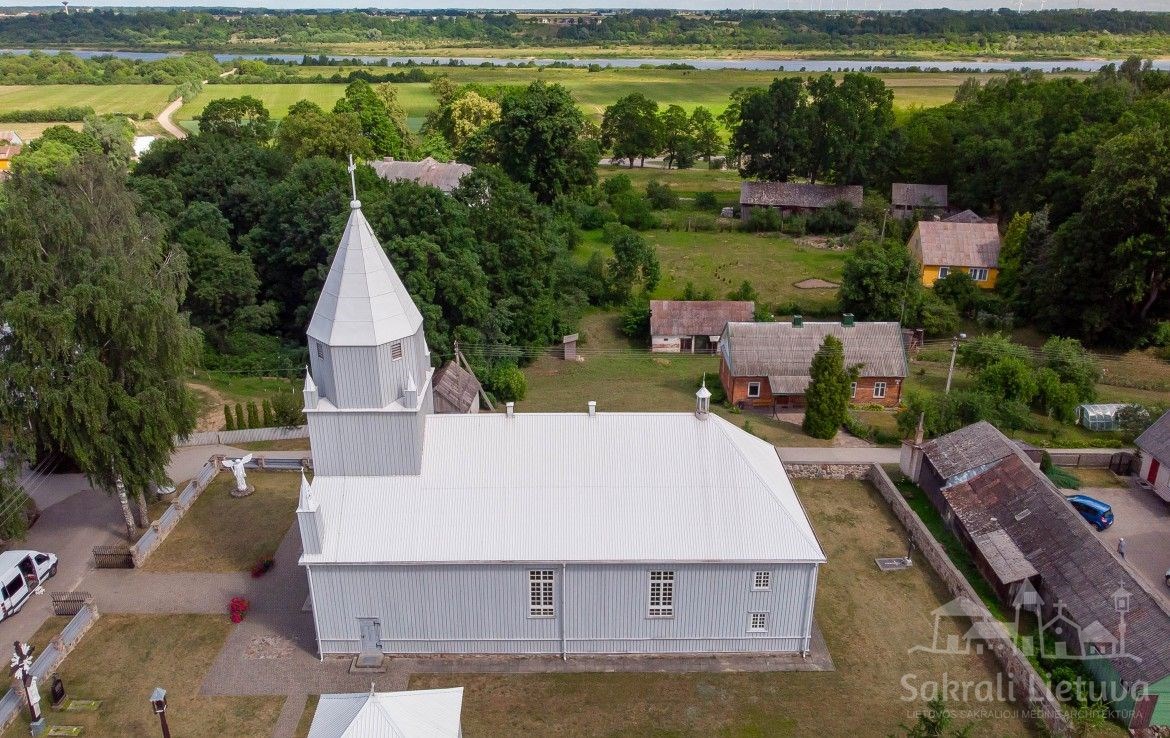 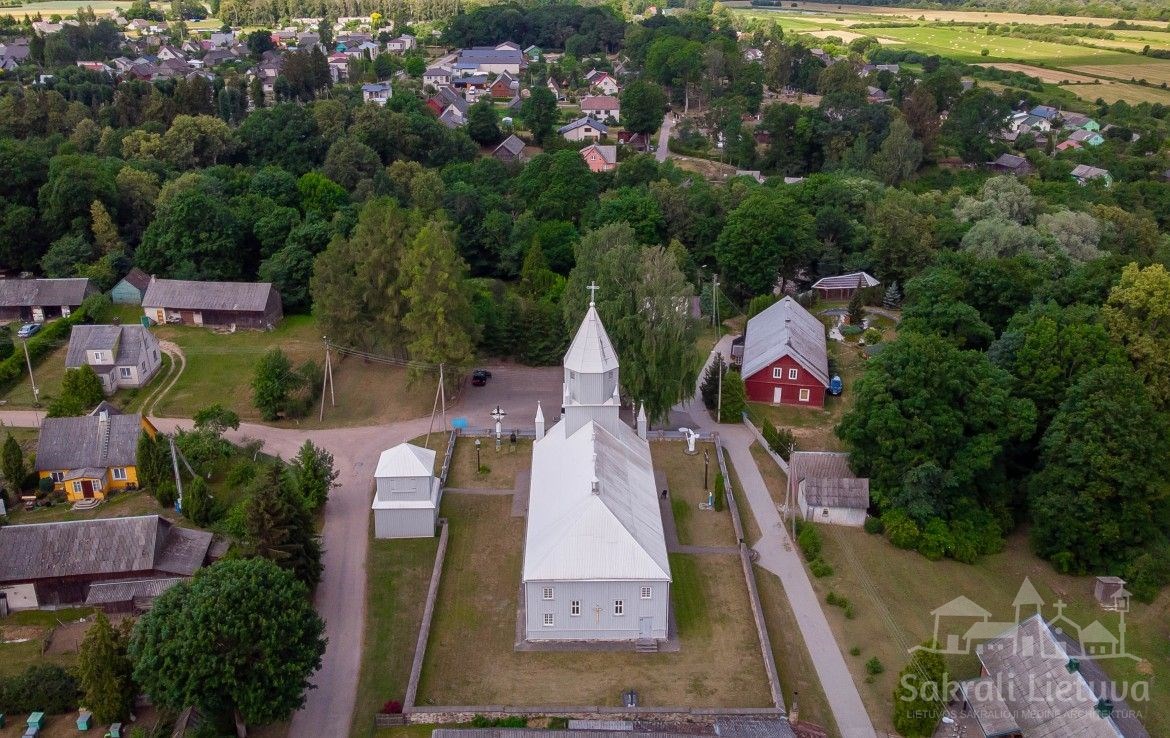