Imbradas Church of the Crucified Jesus

In 1786-1787, the landlord Pranciškus Molis initiated the building of Imbrad Church. More than a century later, in 1891, the church was renovated and the sacristy was attached to it thanks to the brothers Jonas and Pranciškus Prūsokas. The prayer house in Imbrad was again maintained in the interwar period. Initiated by the pastor M. Šapagnis and the priest G. Prijalgauskas, funds were collected from the parishioners, and in 1930-1939, the church was restored, its interior was remodeled. For many years, Vytautas Antanas Šamšonas was a priest of Imbrad Church and spread Lithuanianness, national awareness and religion in the parish. In 1961, the priest was killed for his activism, and was buried in the churchyard.

Built on high stonework foundation, the church is made of oak and pine logs, is of a long rectangular layout with a three-wall apse and has a small sacristy on the right. A portico of the main facade betrays the fact that the church is Neoclassical in style. The four supporting columns on the high pedestals are made of bricks and plastered over. They support the smooth architrave and the cornice above it decorated with modillions. The eaves of the high triangular pediment are adorned with verge trims decorated in teeth pattern, and the panel center has a semi-circular window with a ray pattern glazing and a rim carved in round teeth pattern. The pediment is topped with a quadrangular turret with a double four sided roof complete with a spike and an ornamented cross. The apse ridge is topped with a metal structure containing a bell. The gable church roof is covered with sheet steel, and the above the apse it is three-sided, above the presbytery – two-sided. The main facade has a two leaf door and a finely partitioned window above it with a triangular dripstone. High rectangular-shaped windows with triangular dripstones are on both sides of the door. The windows of segmental arches separated by decorative features of side facades also have triangular dripstones. The church is completely boarded with horizontal planks.

The interior of Imbradas Church of Crucified Jesus has one nave, and the organ space is supported by two columns. The main altar is decorated with a 19th century Crucifix sculpture. The church has other valuable works of art. They are the picture “St. Jerome” painted at the end of 18th century, and the pictures “St. John the Evangelist”, “Christ in the Garden of Olive-Trees”, “St. Martin and the Beggar” created at the end of the 19th century. A small neo-Baroque altar has survived to date, as well as Classicist candlesticks cast by V. Feldman in 1811.

The churchyard is surrounded with a stonework fence with an iron gate. A single-volume belfry is attached to the fence. The trapezoidal belfry is covered with a flat pyramidal sheet steel roof with a cross. The belfry has rectangular sound holes at the top. Like the church, the belfry is boarded horizontally. 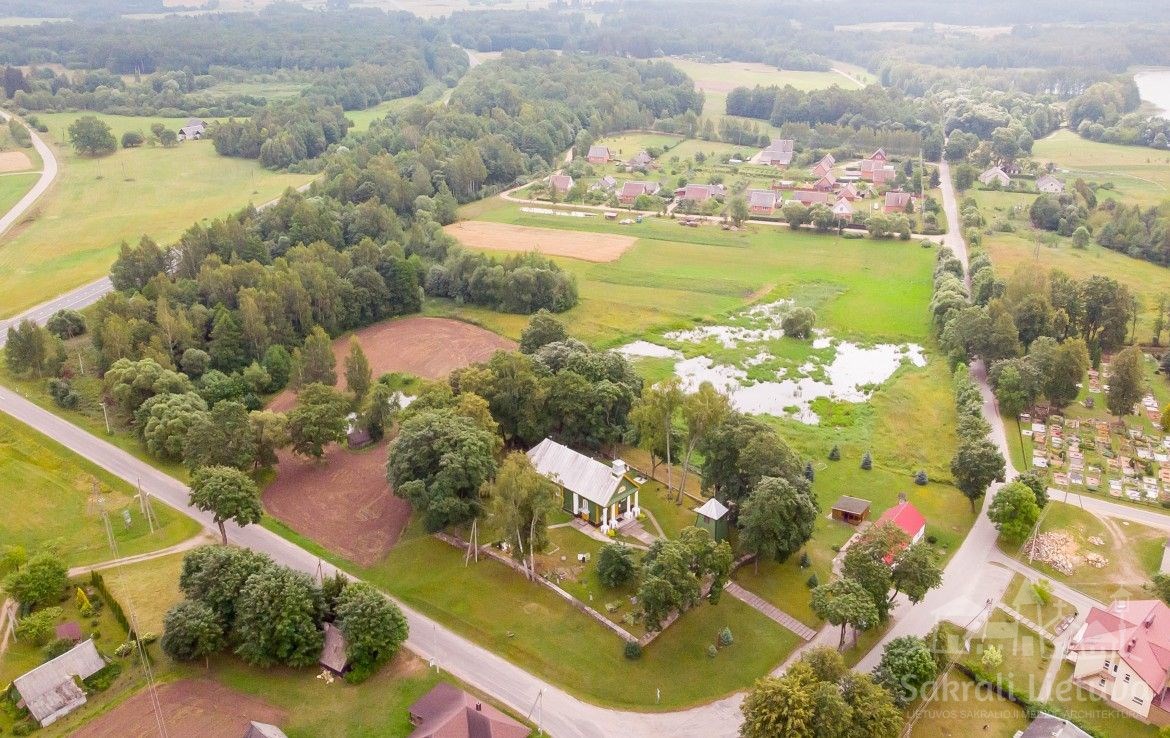 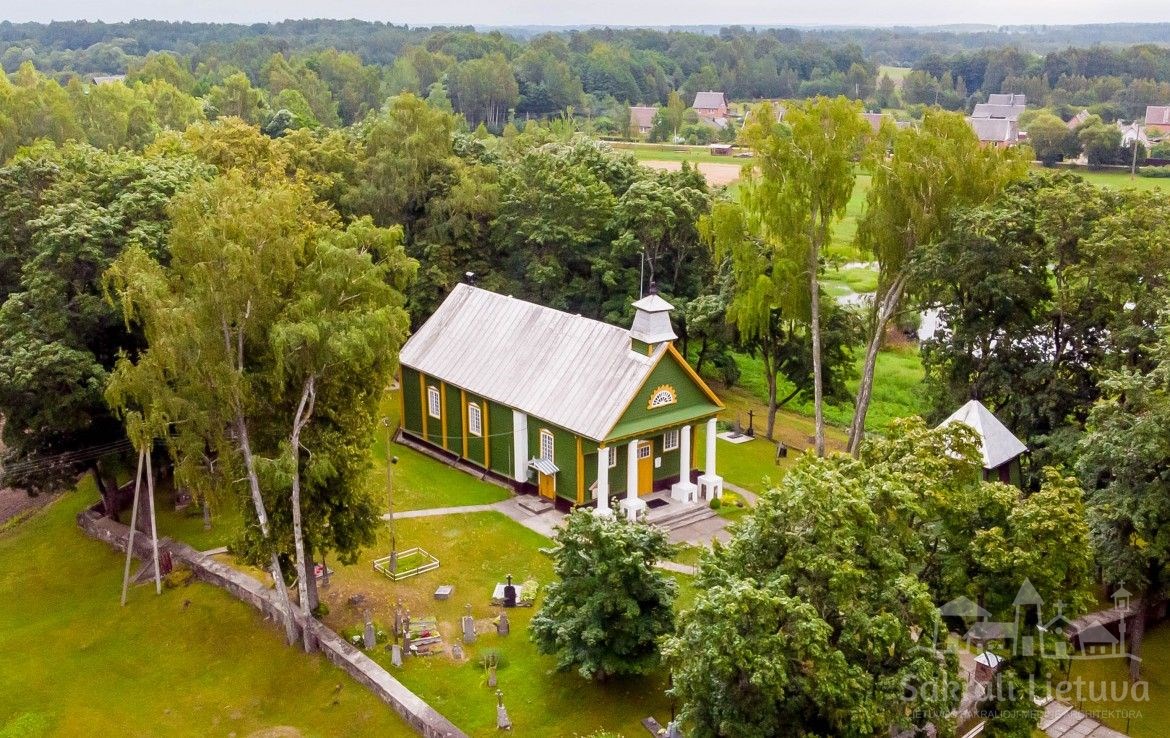 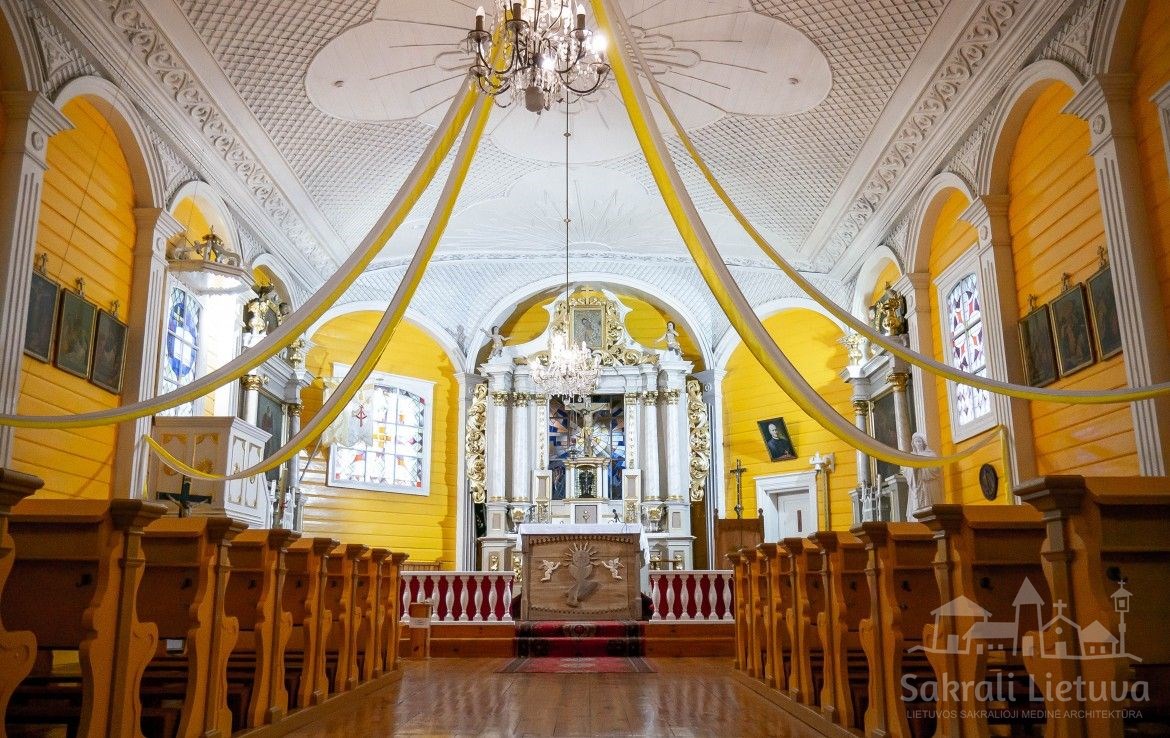 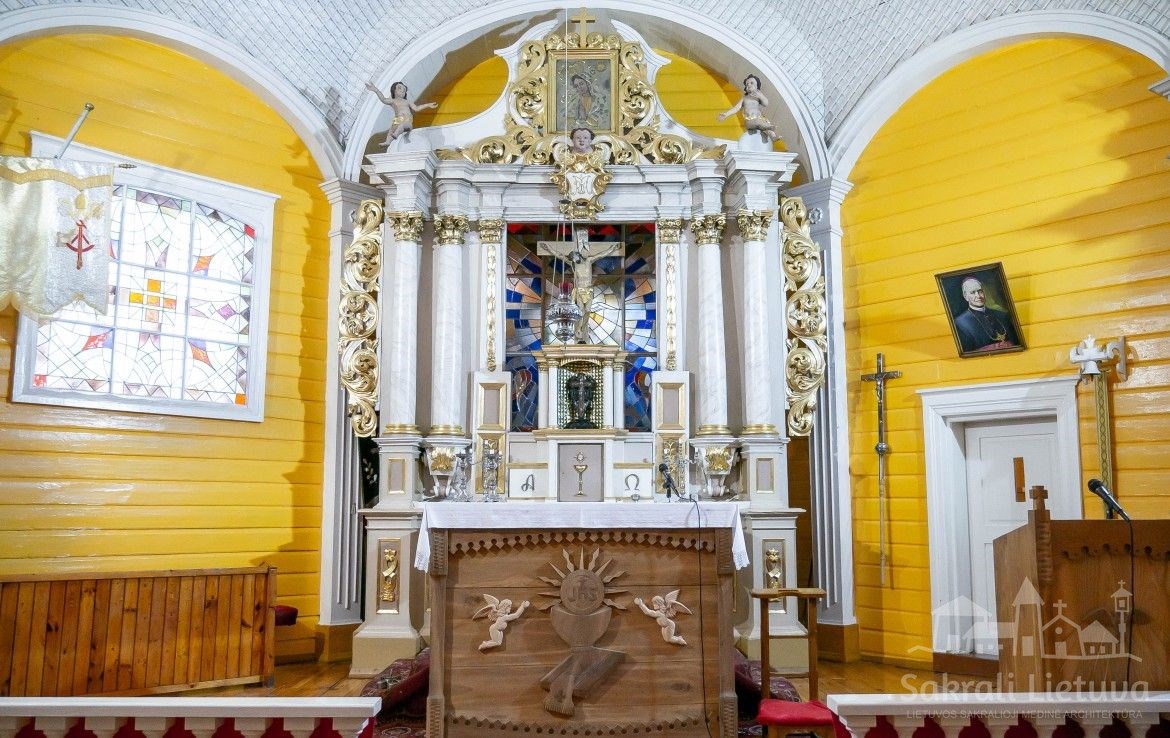 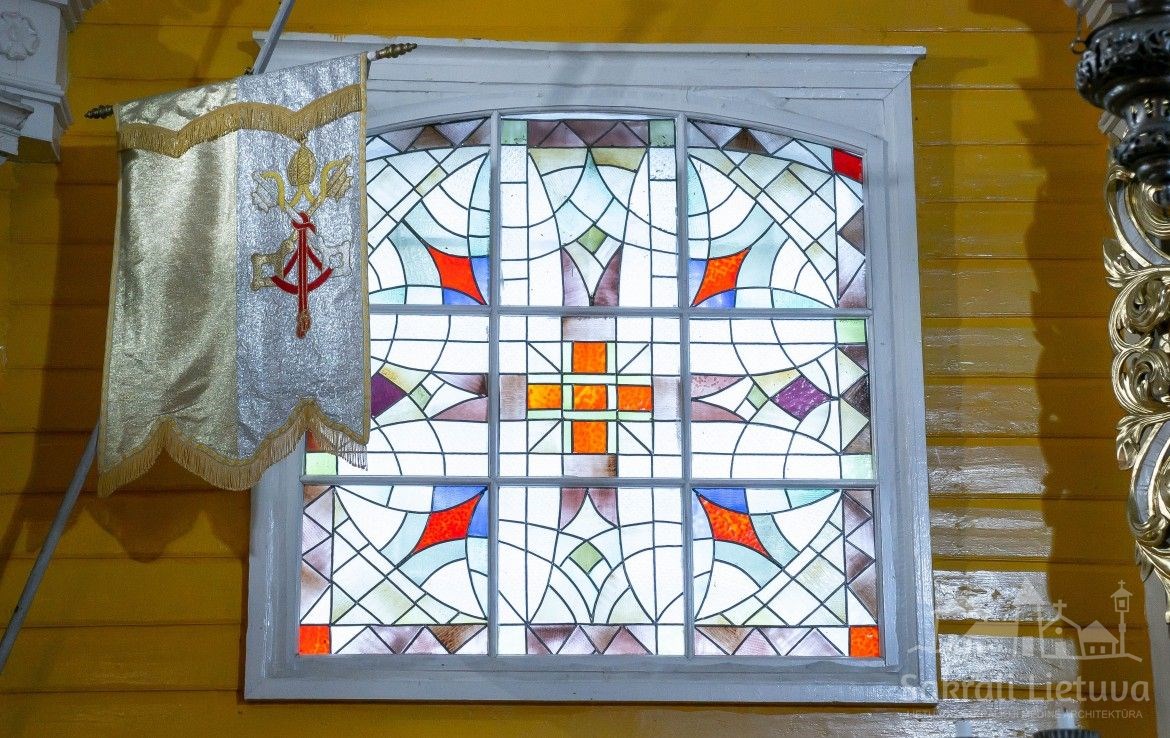 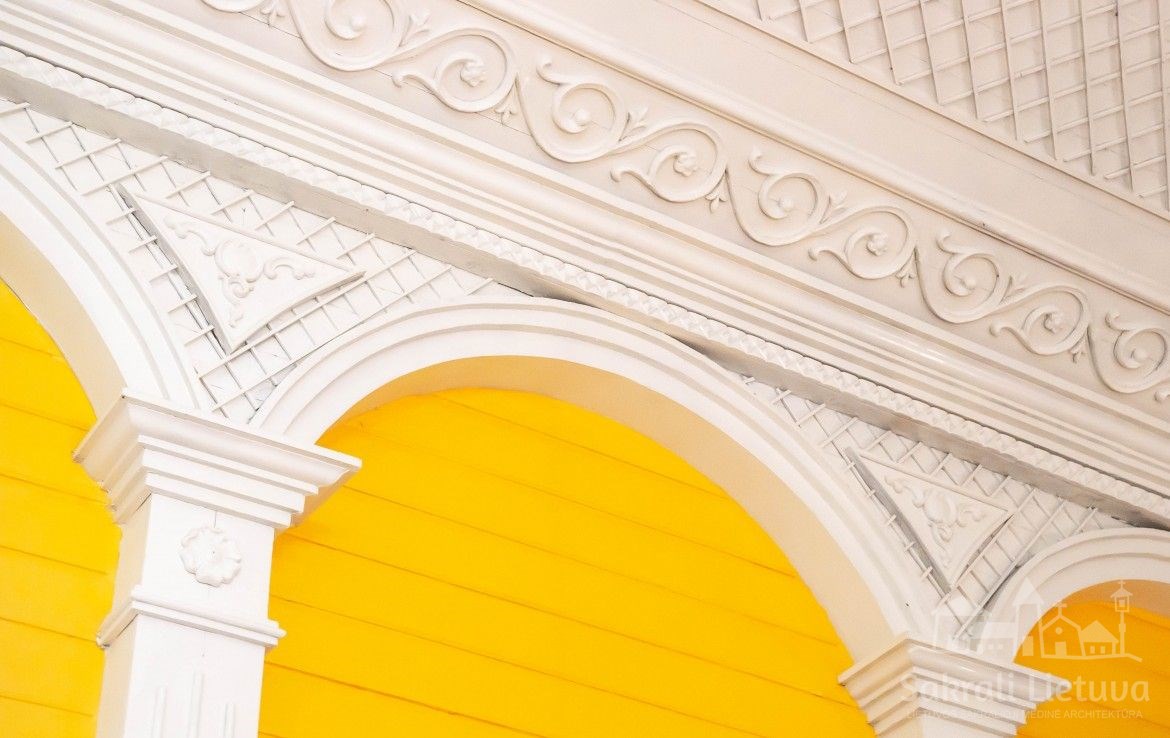 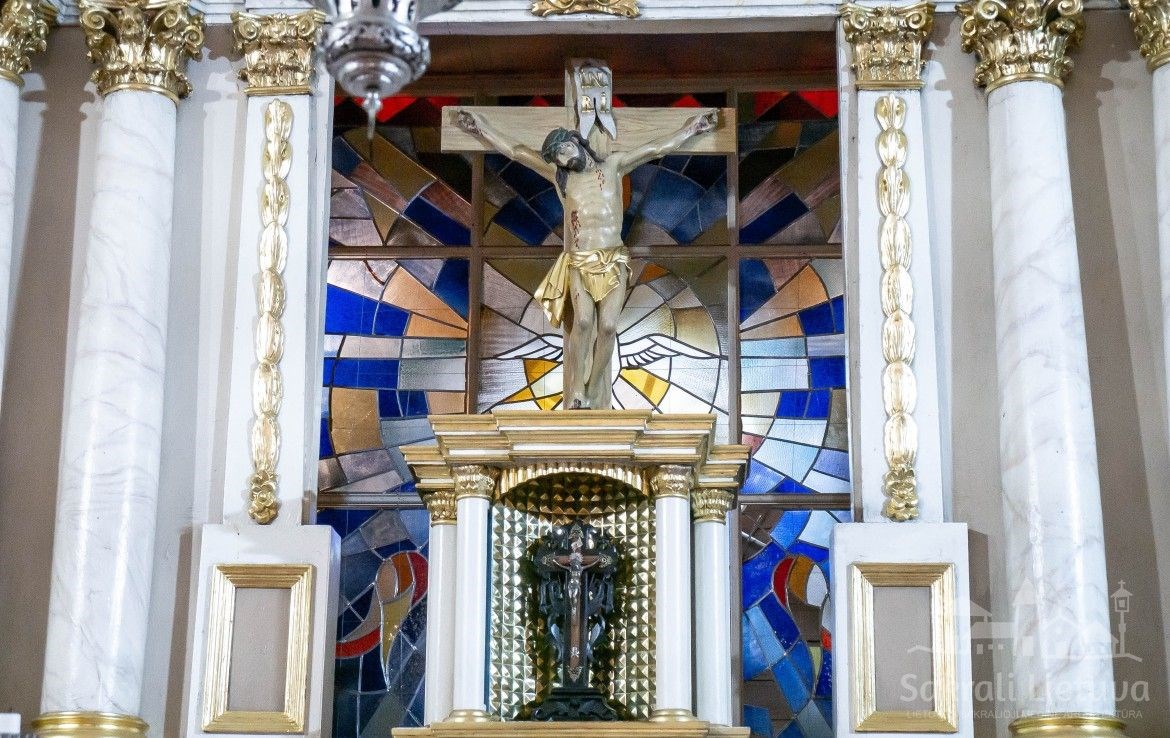 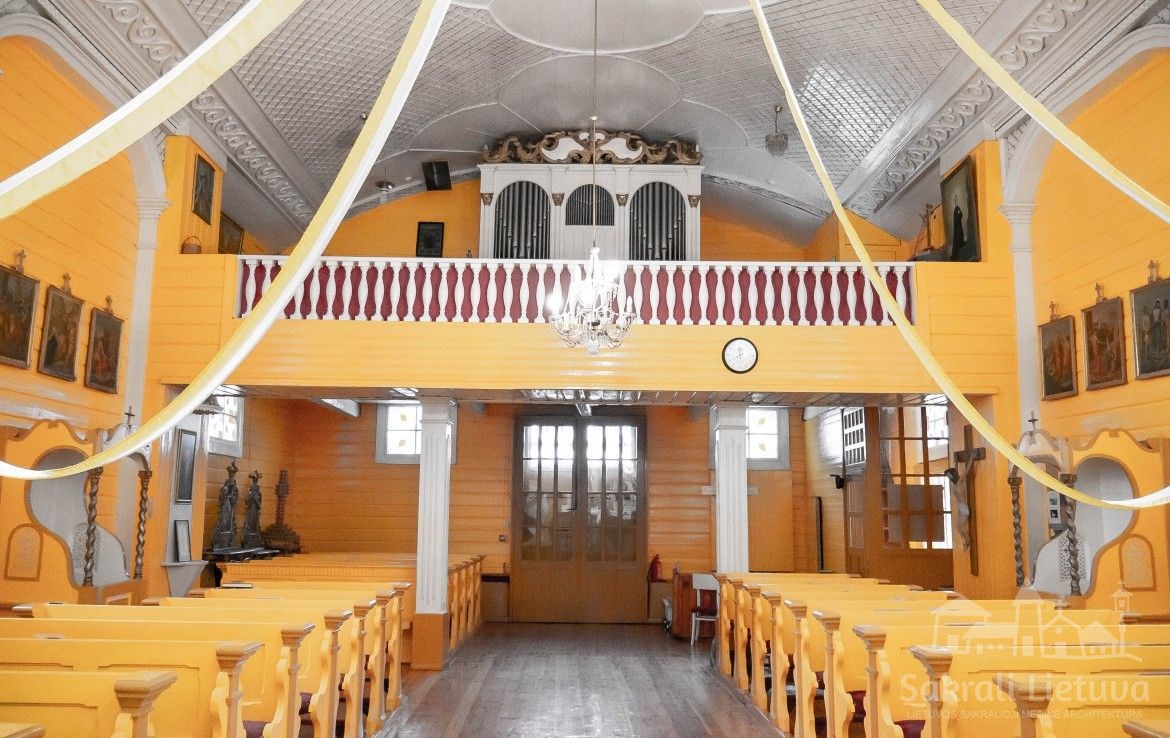 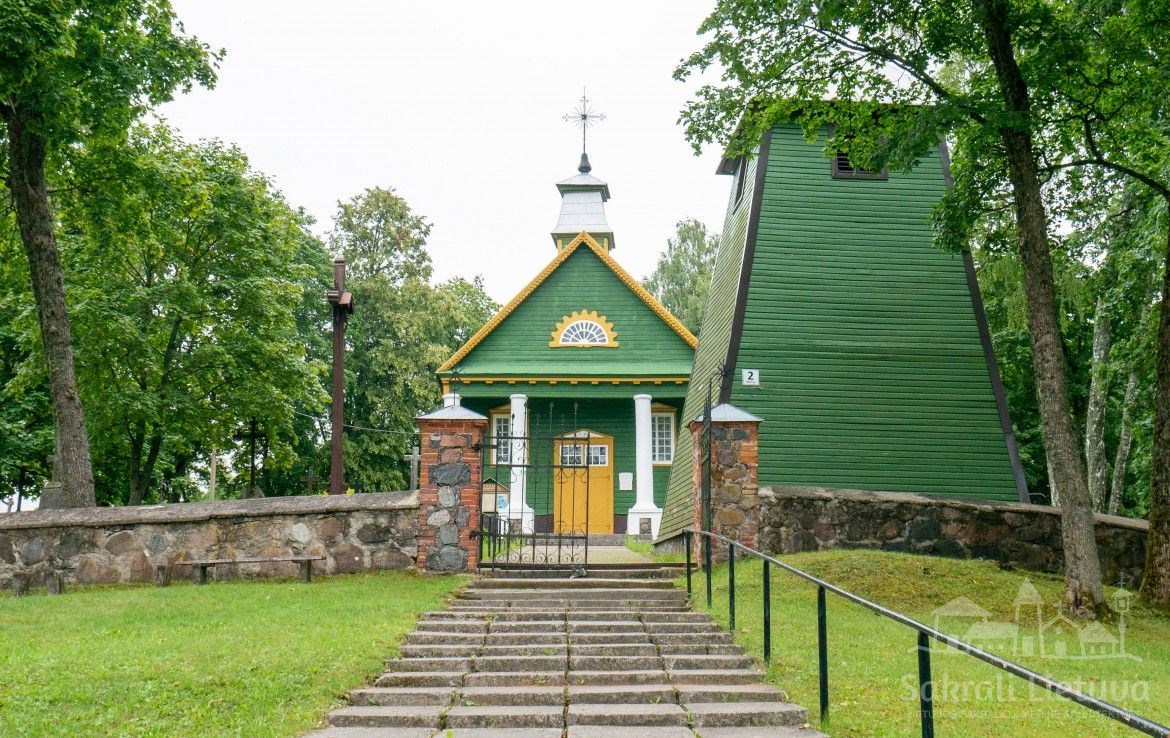 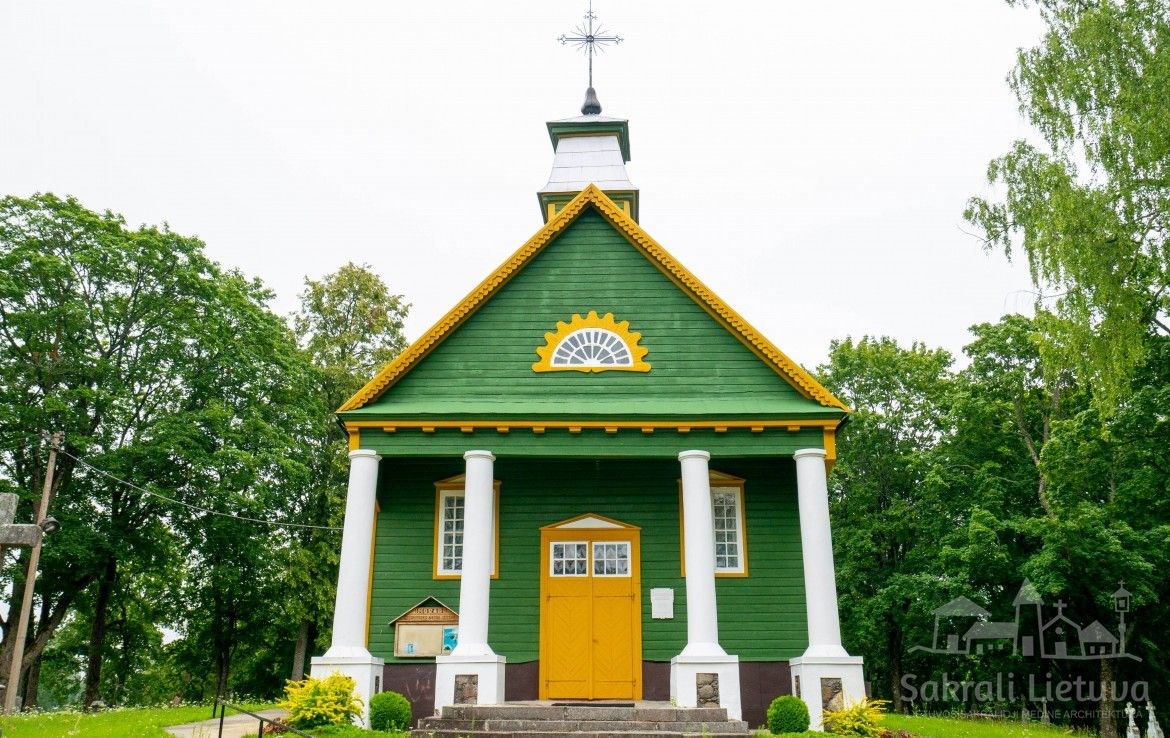 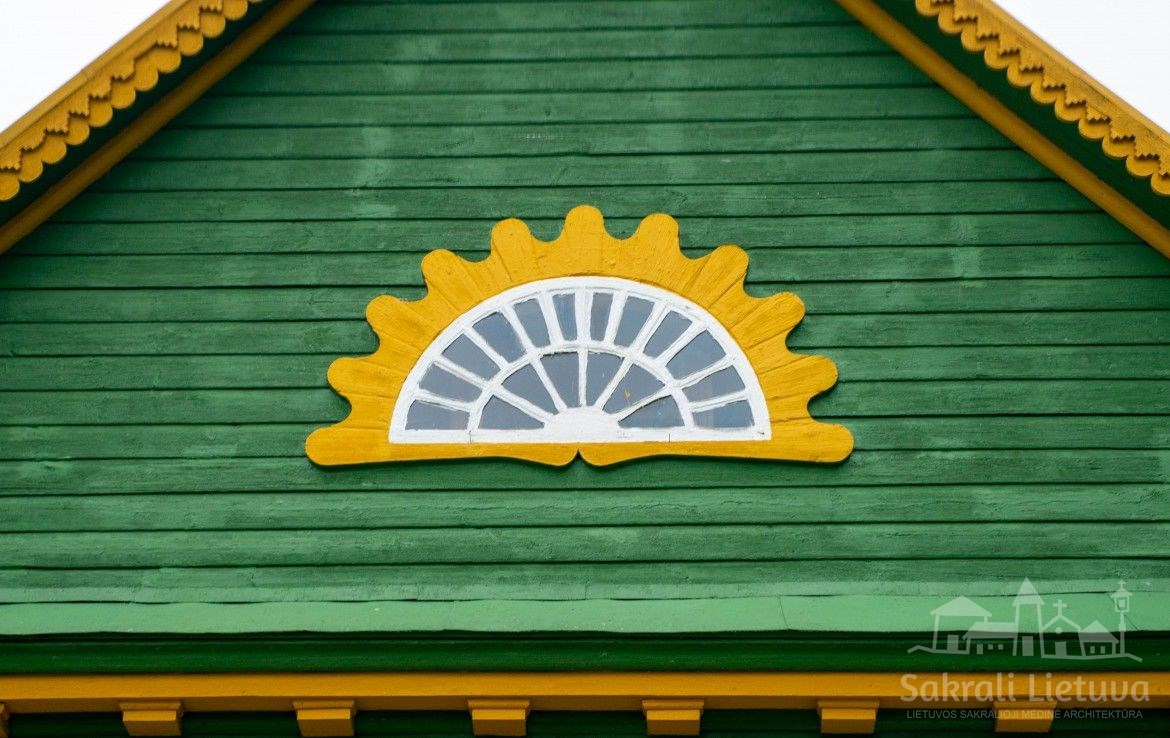 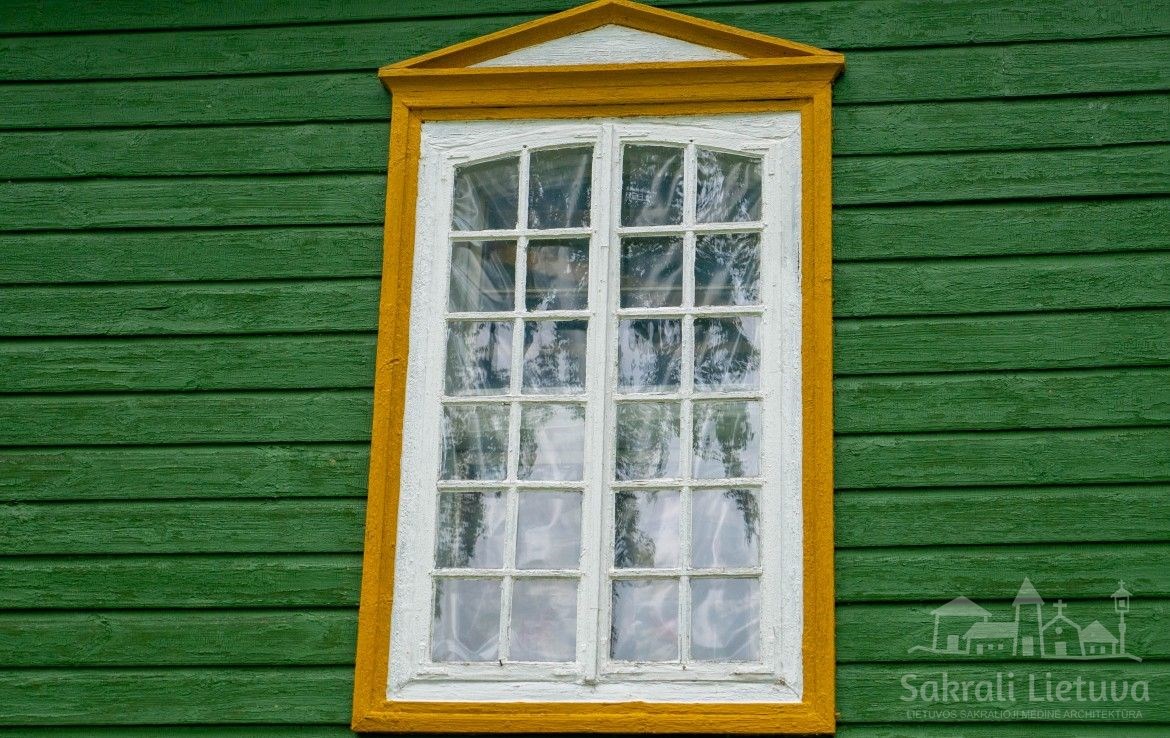 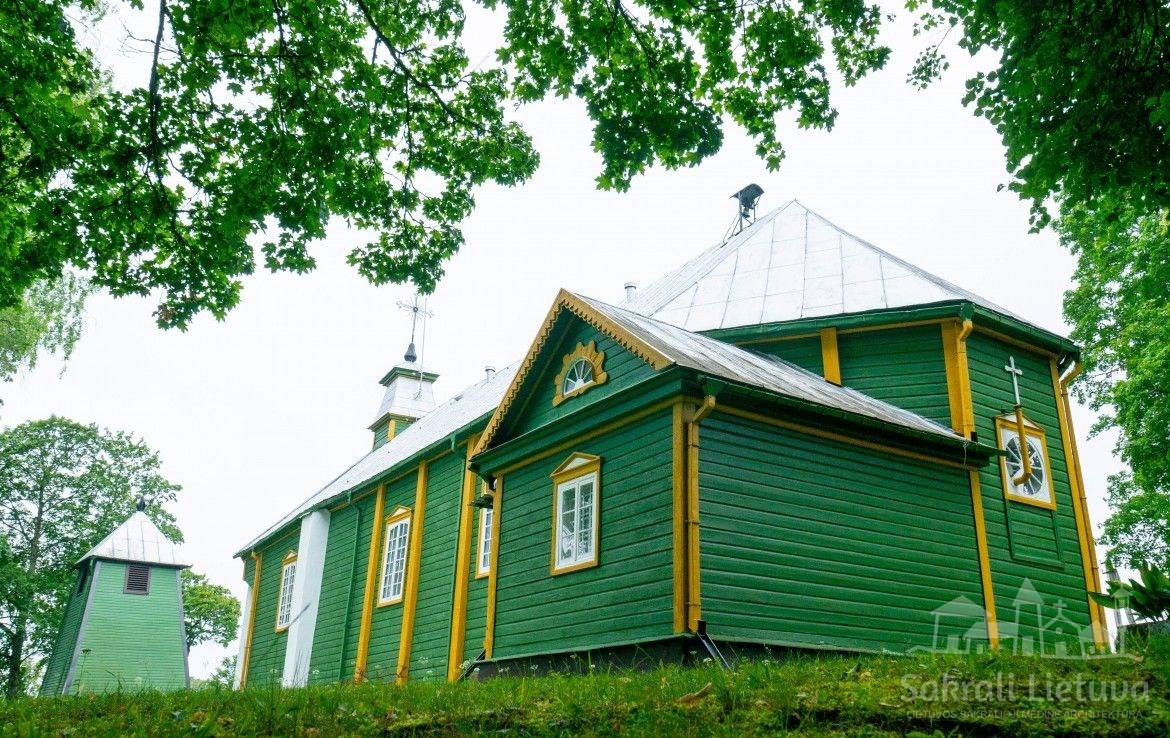 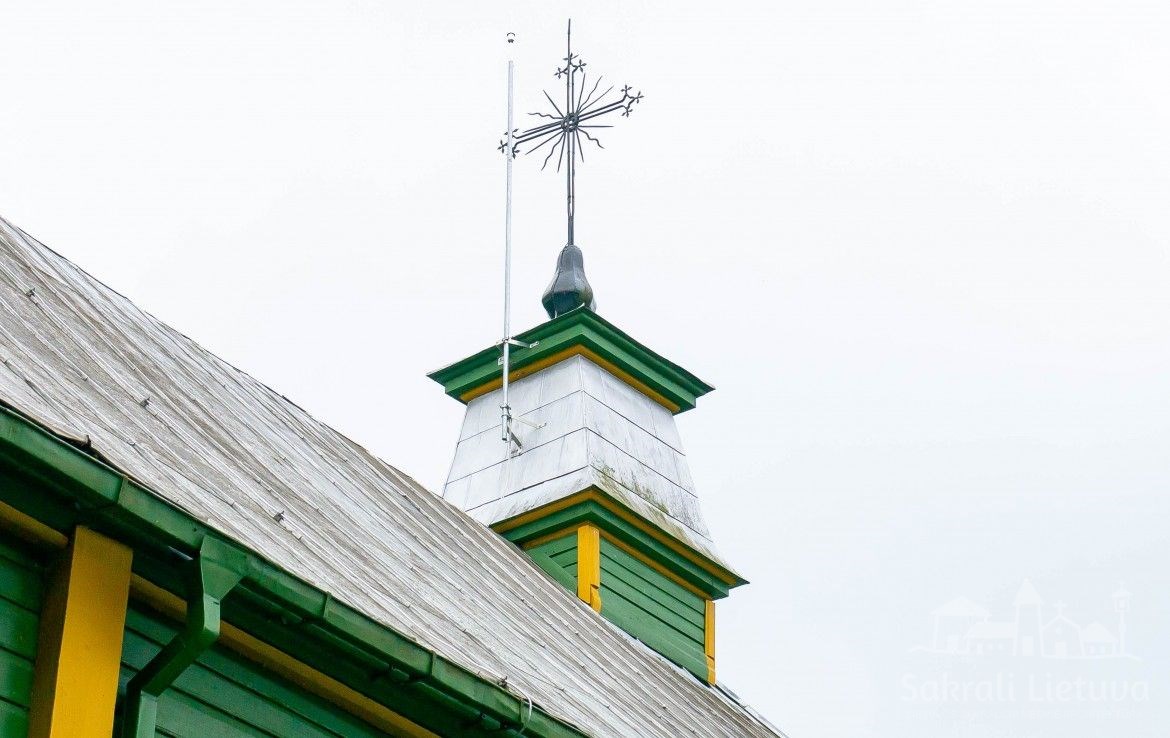 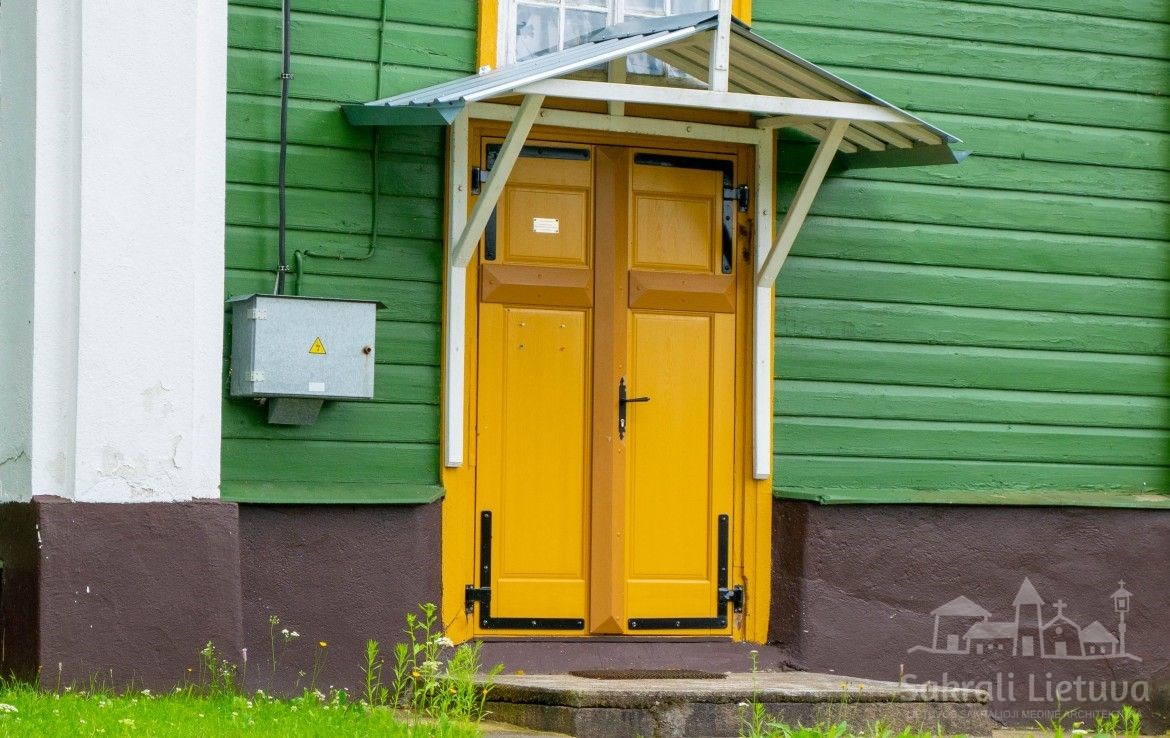 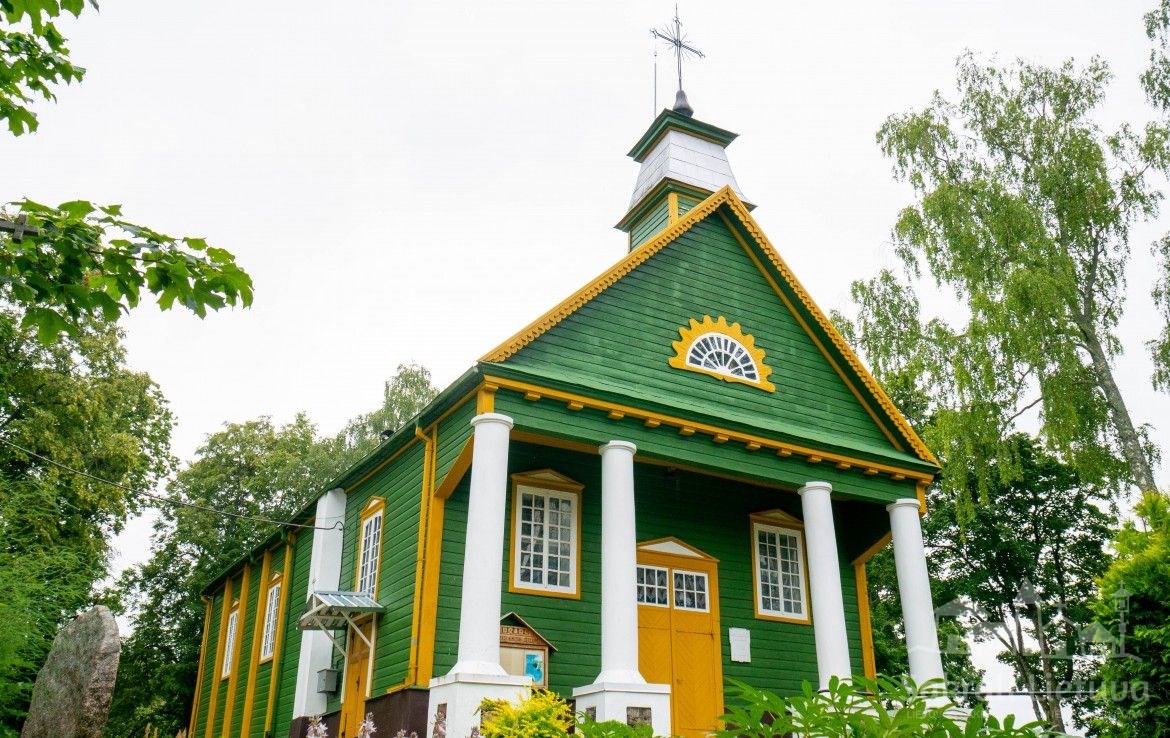