In 1685, a chapel was built in Eitminiškės that belonged to the missionary monks. After the uprising of 1886, the chapel was closed, and as late as in 1924, a new wooden church was built thanks to the donations of the inhabitants. The church was named after St. Anthony of Padua. During the interwar period, Ambraziejus Jakavonis, a Lithuanian educator and Lithuanianness promoter, was the pastor there. In 1943, due to his position he was tortured by the Armia Krajowa guerrillas. The priest’s grave location is unknown, but in 1988, a tombstone designed by architect Napalis Kitkauskas was built in the churchyard to commemorate him.

The Historical style Eitminiškės Church is of a rectangular layout, built on a high plastered foundation, has three naves and a five-wall apse and low side sacristies. Although there is no pronounced transept, the projections at the presbytery have their own small gable roofs with triangular pediments that are lower than the central nave. The roof over the main volume is two-sided, covered with sheet steel. The central part of the main, richly decorated facade is protruding forward and is adorned with a four-column portico with a slanted roof. The second section includes an arched window illuminating the choir, and paired pilasters on the sides of the central part, transitioning to the attic . The attic above the central nave is decorated with a niche-imitating edging with a cross in the center. The attic is topped with a triangular pediment with a decorative carving on its panel, an eye inside a triangle with rays symbolizing the Holy Trinity. The church is towerless, but slightly deeper side naves are decorated with attics thus creating the impression of a tower. The centers of the attics include and arched rim that imitates a window, and attics are finished with triangular pediments separated by a cornice. Crosses are above them as above the central attic. The main church door is two-leaf and arched. The windows are narrow, arched, of a rectangular shape, with decorative stained glass. The church is boarded horizontally, and the attic boarding is mixed, combining oblique and horizontal boarding. The churchyard is surrounded by a stonework fence with a decorative iron grille gate. The church has no belfry, a small bell is located on the portico side. 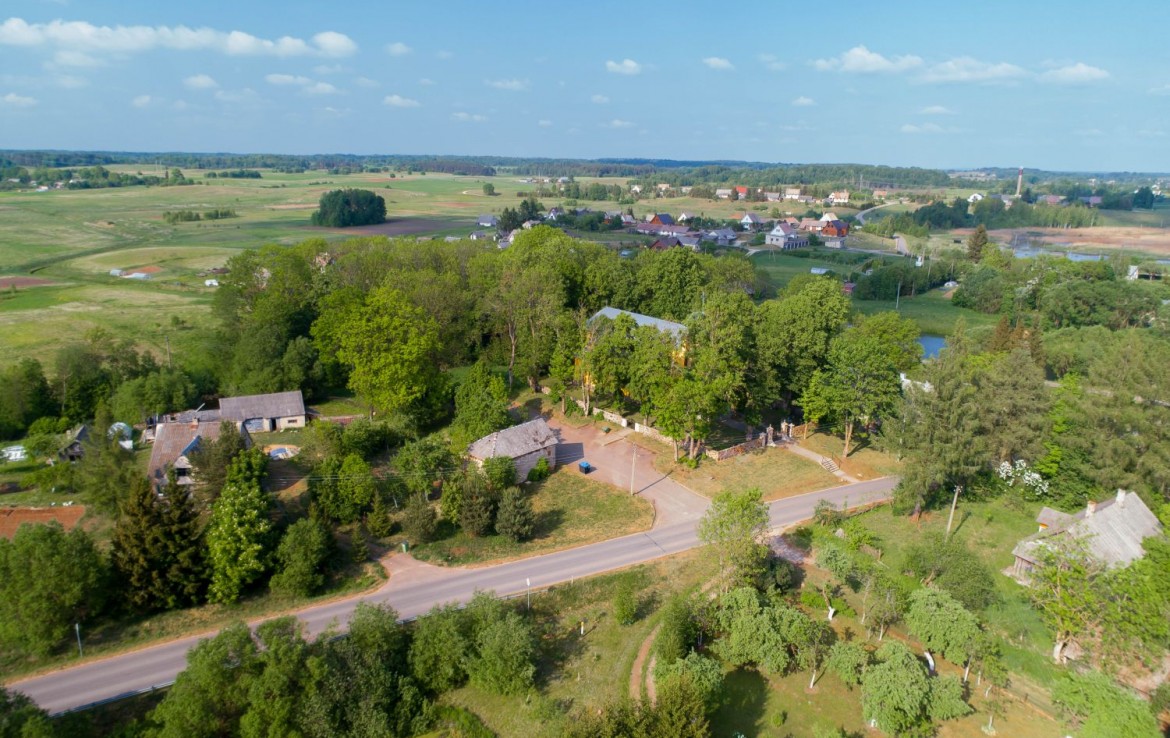 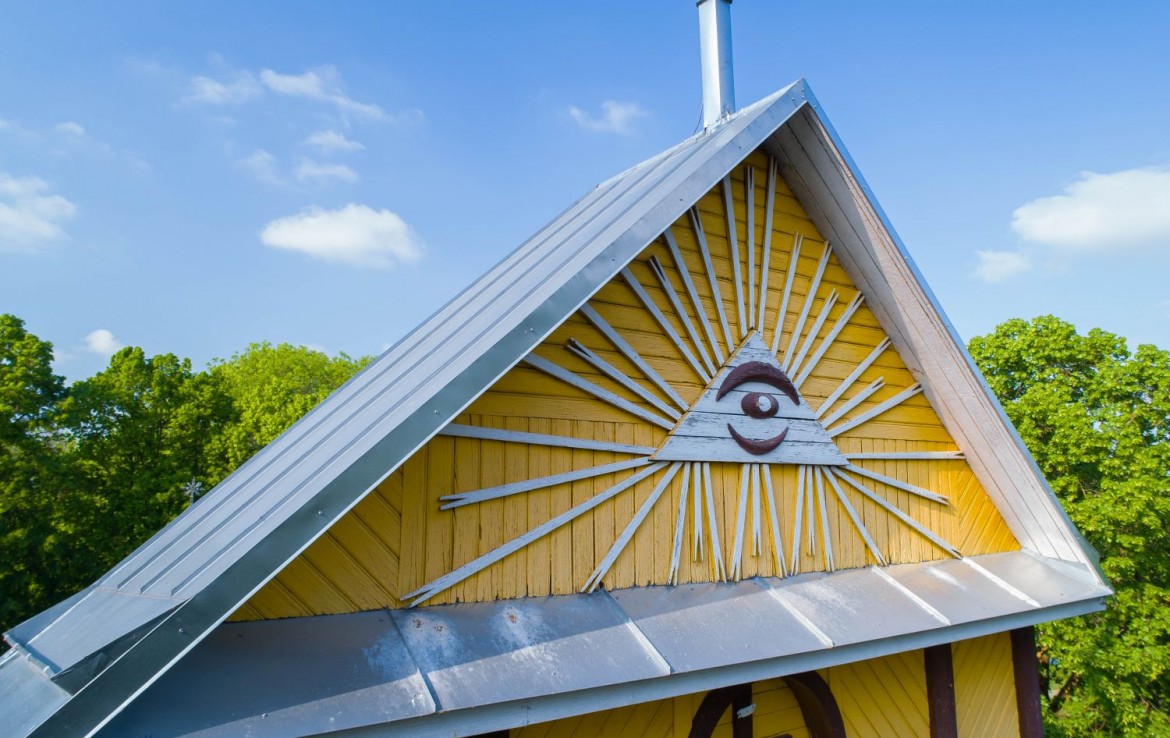 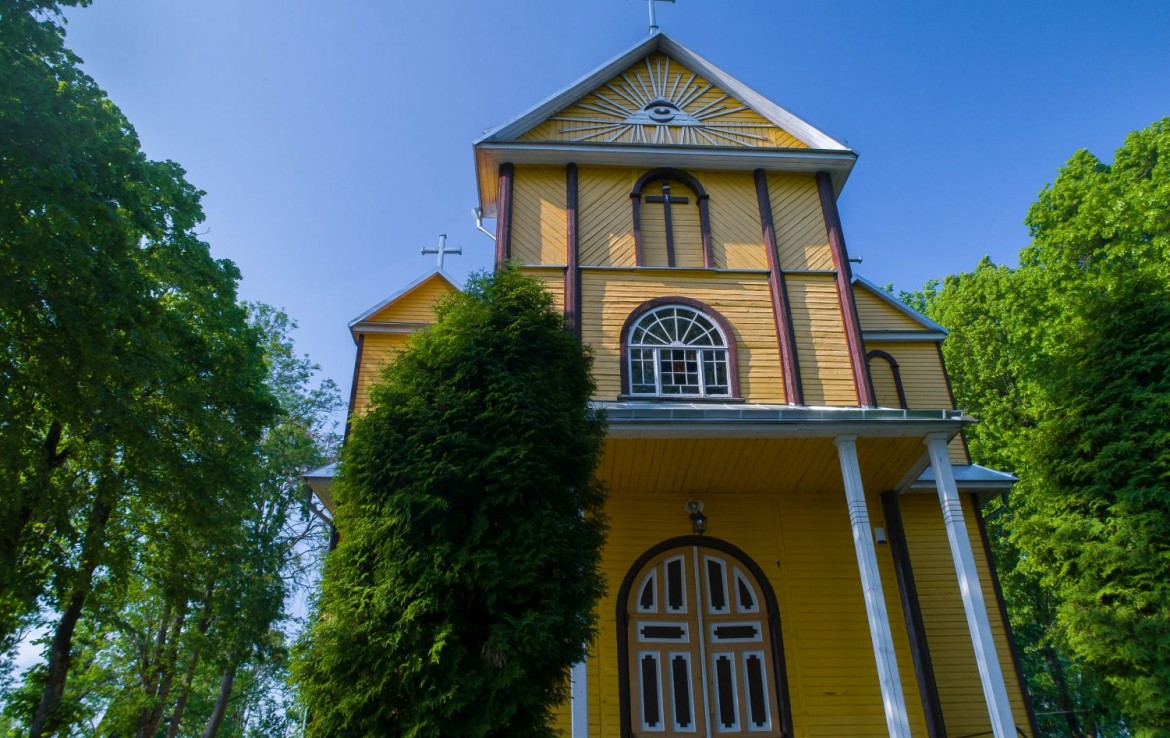 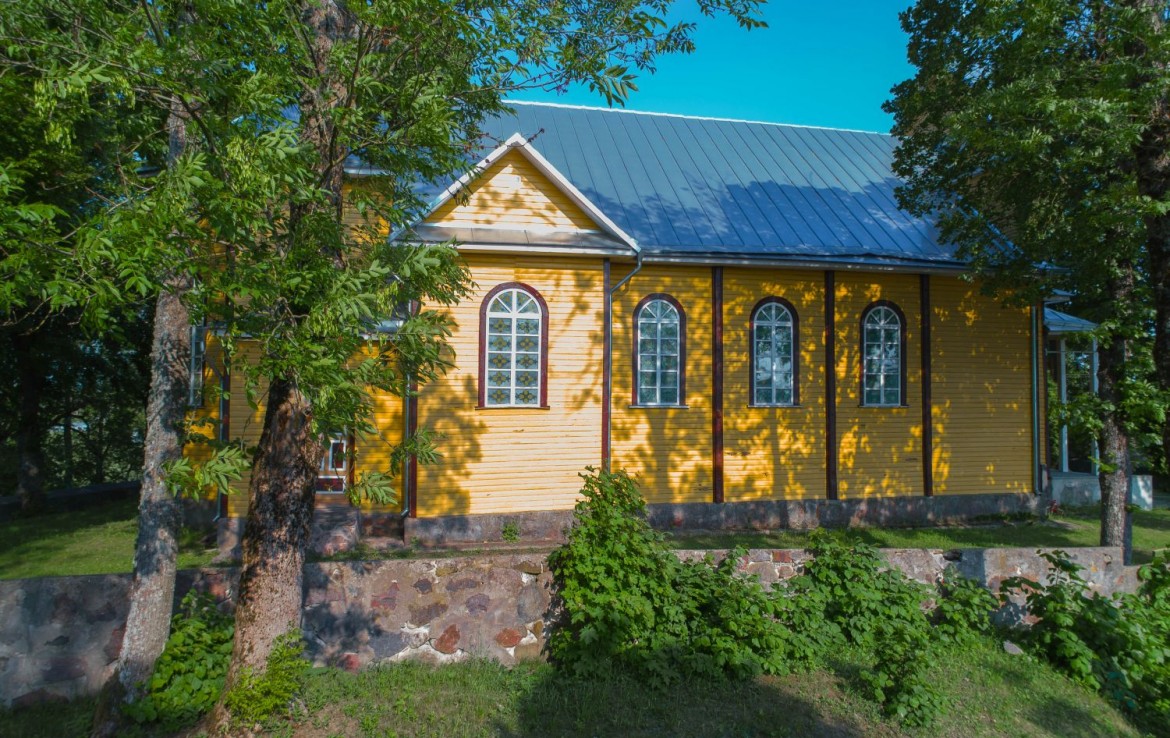 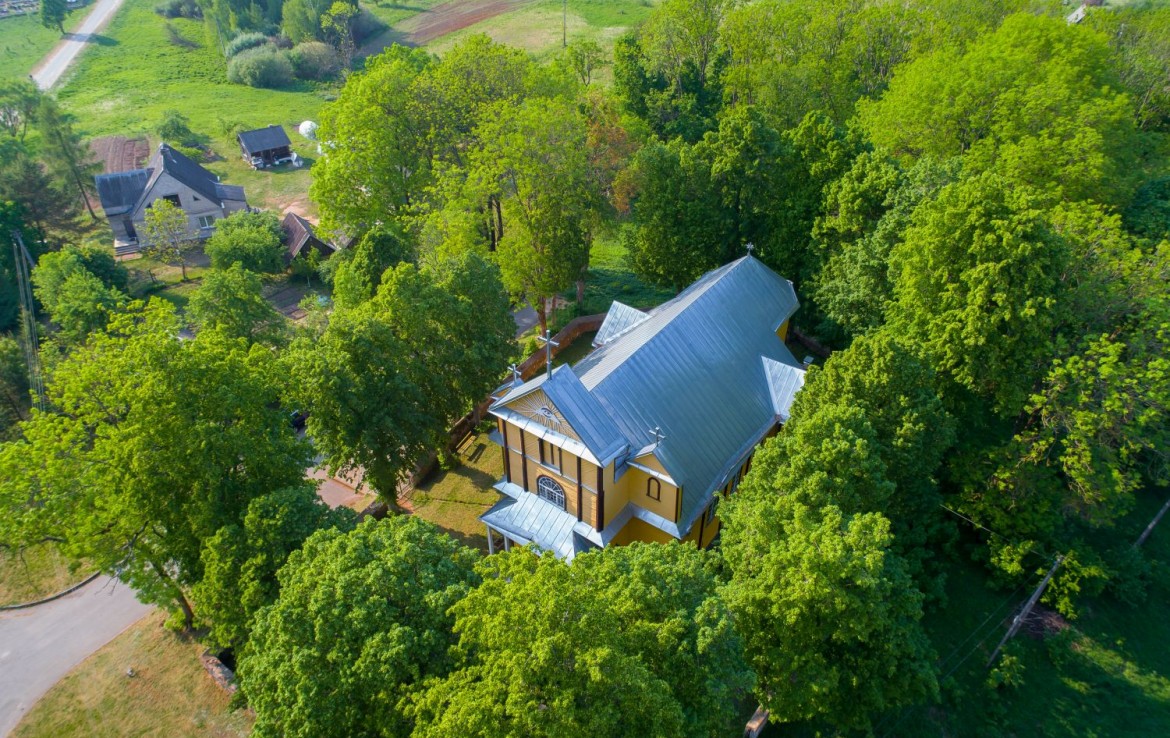 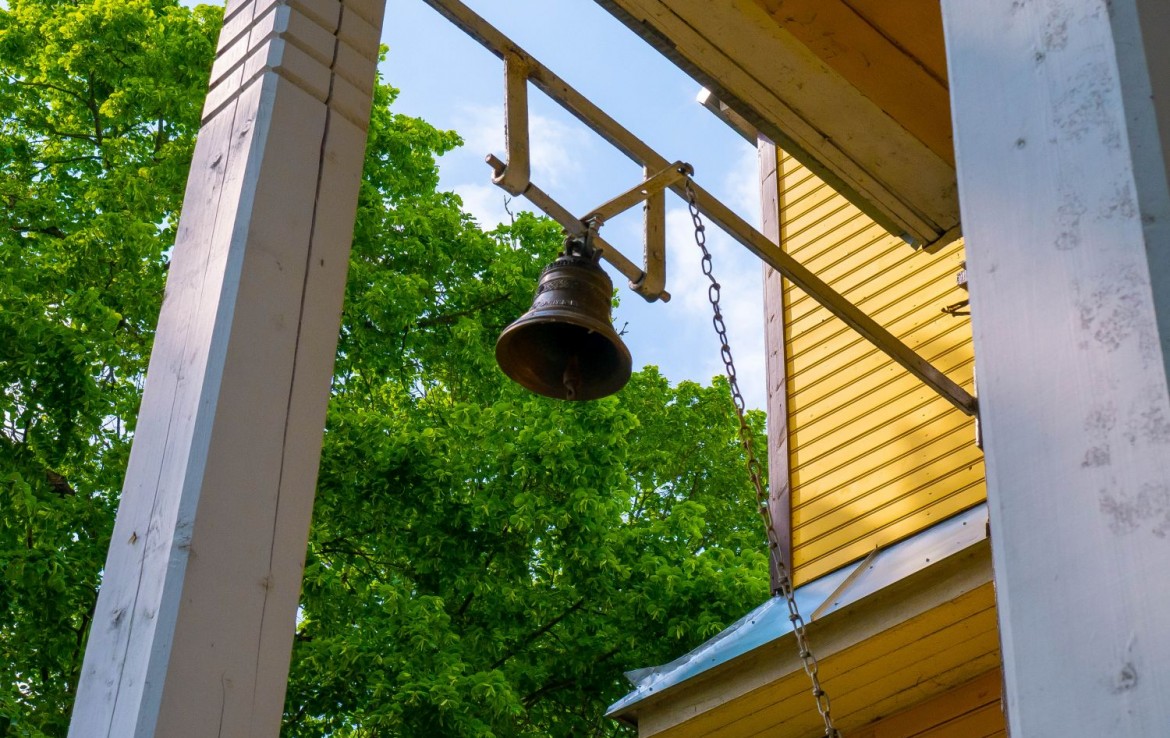 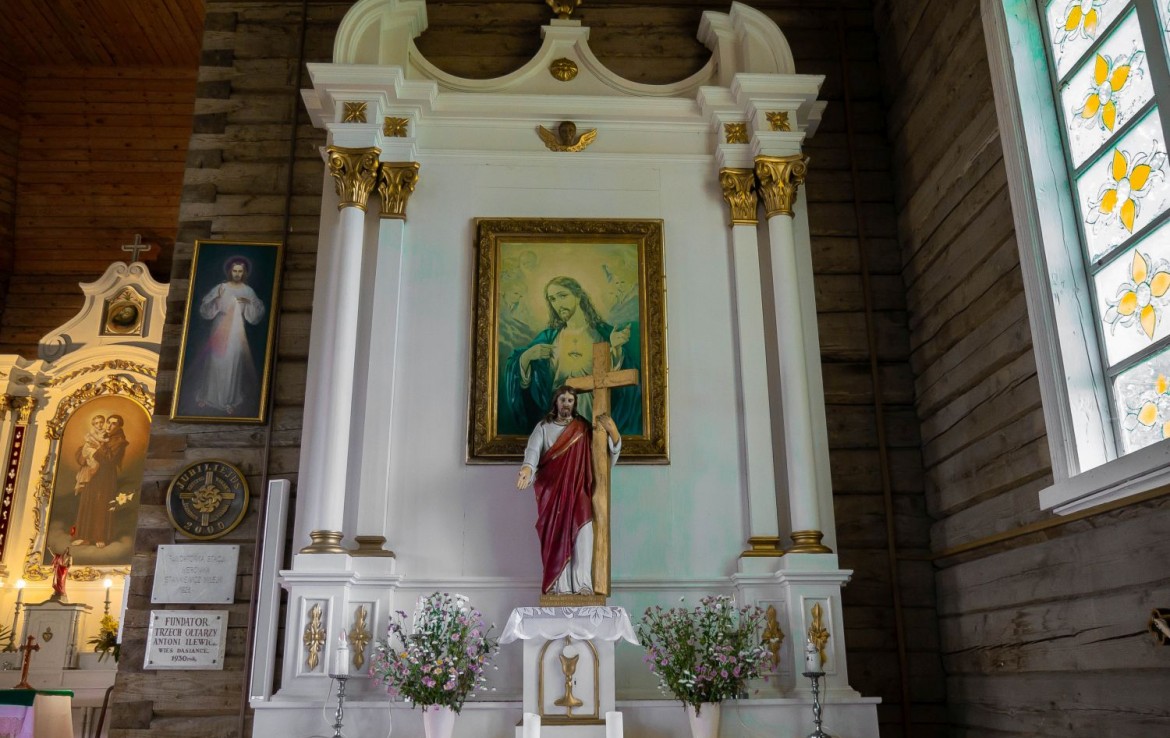 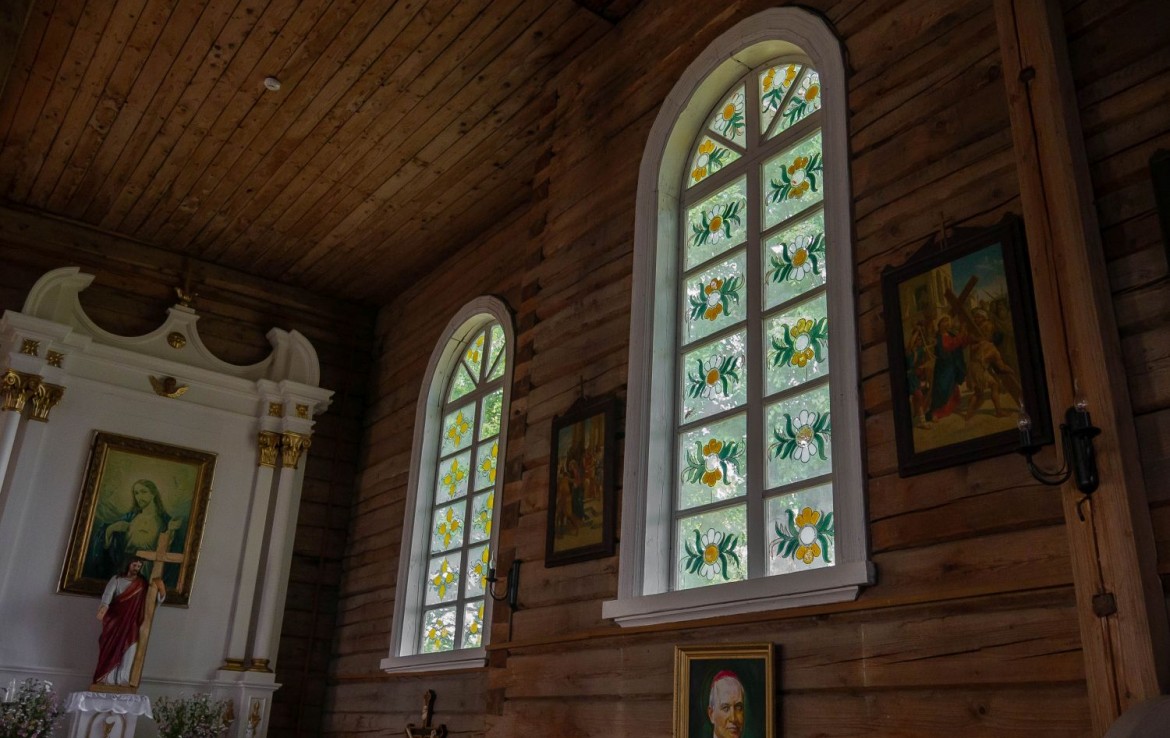 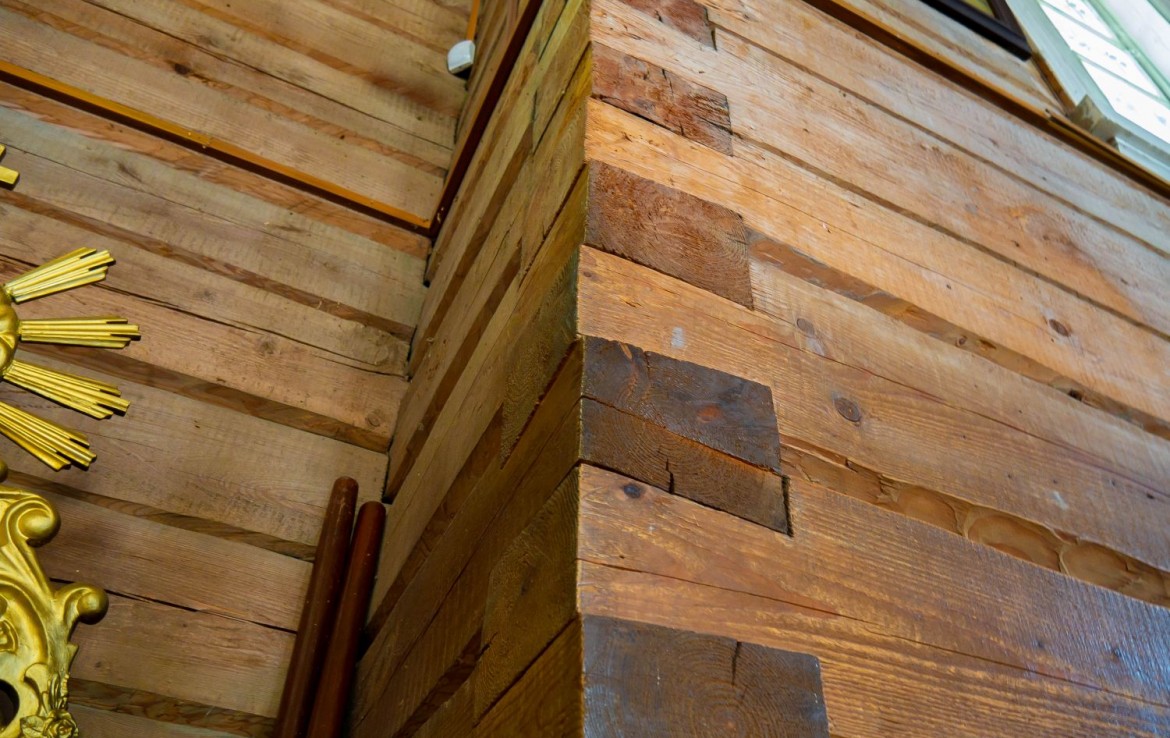 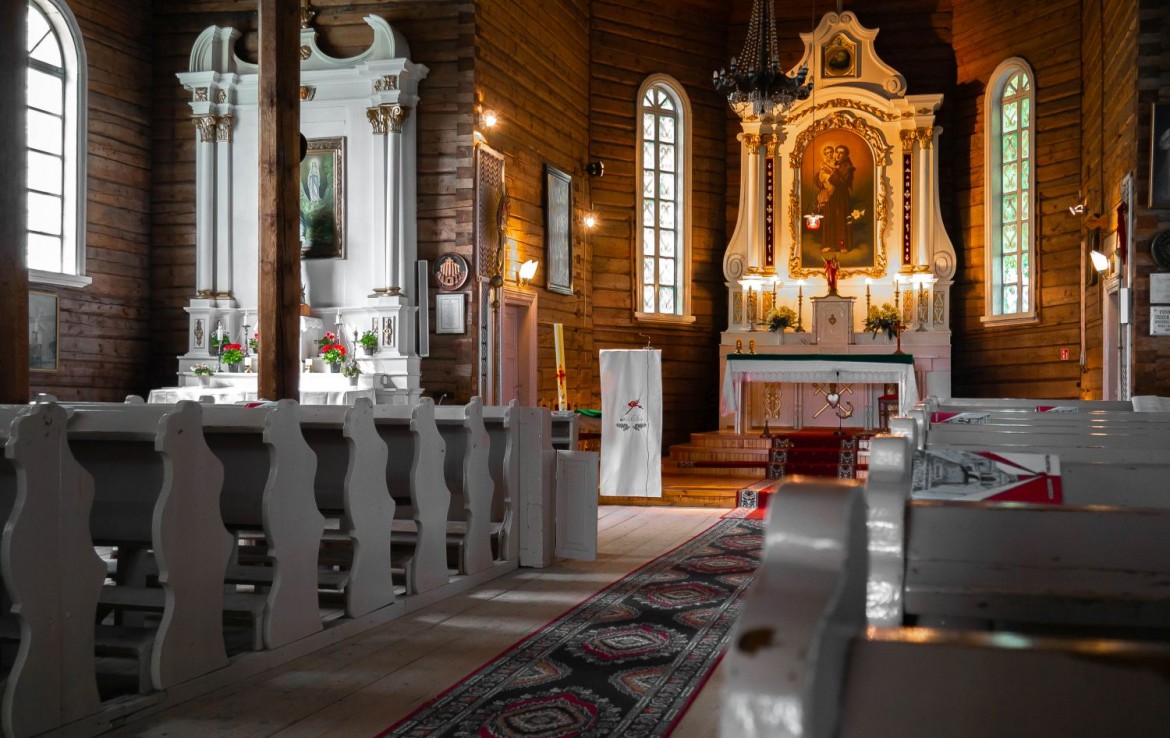 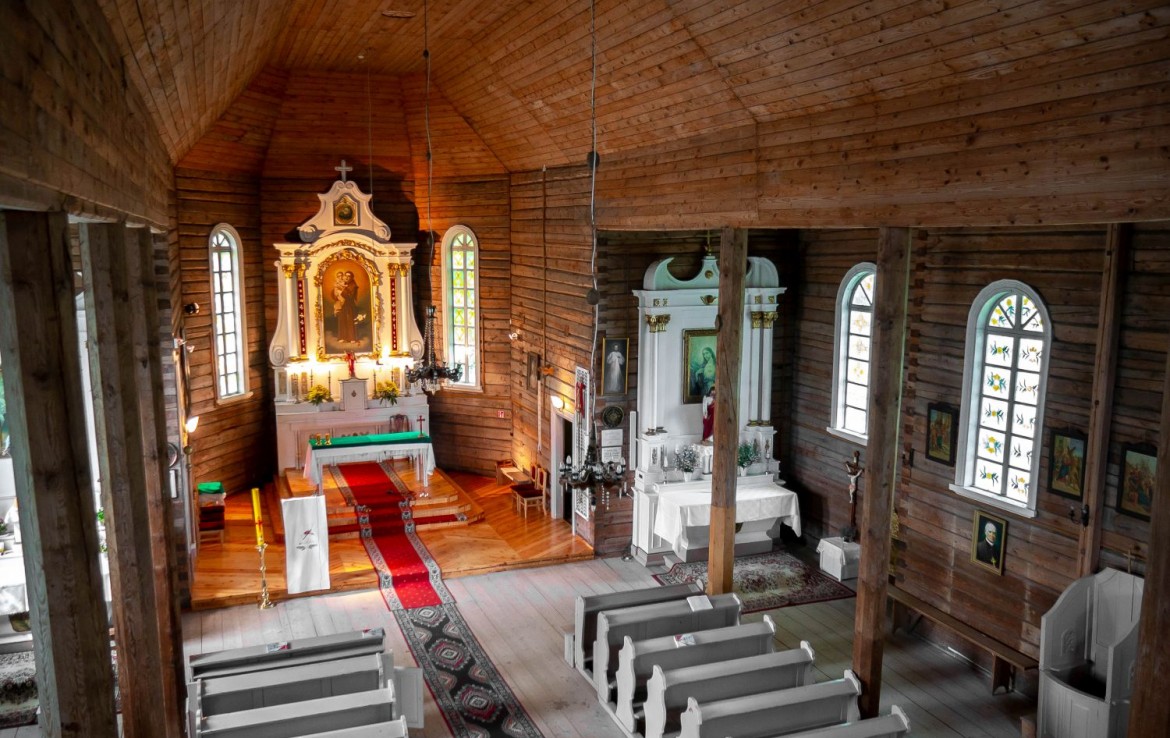 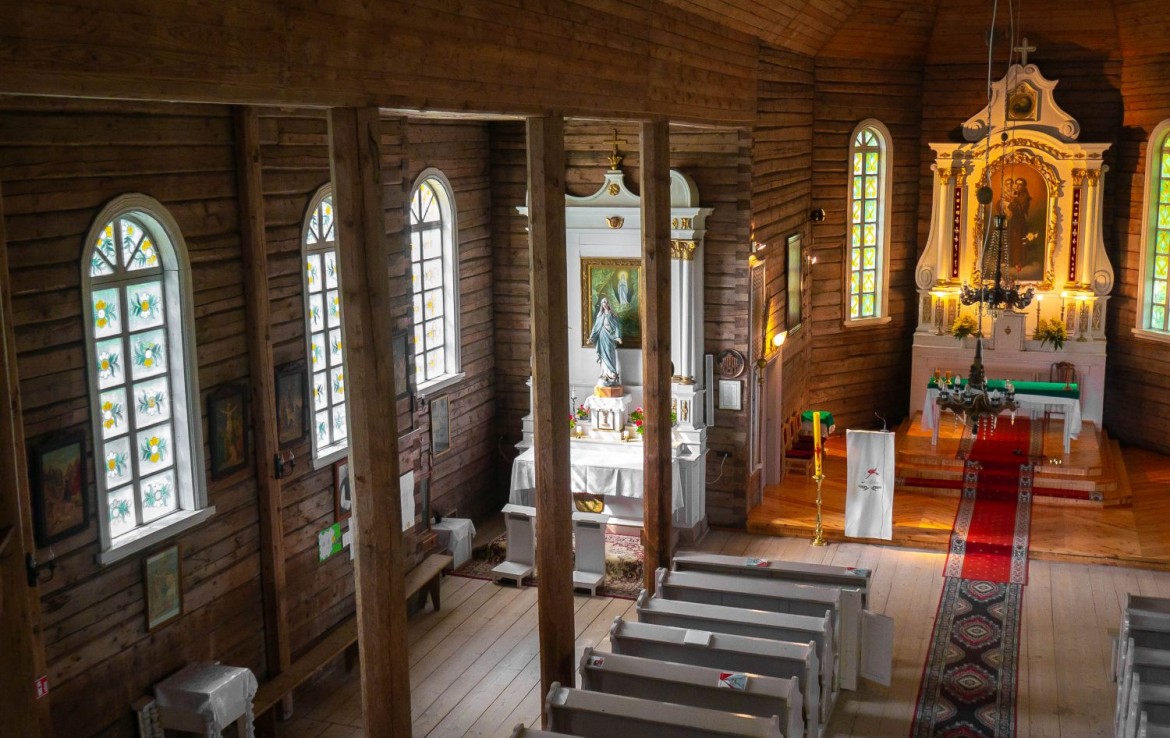 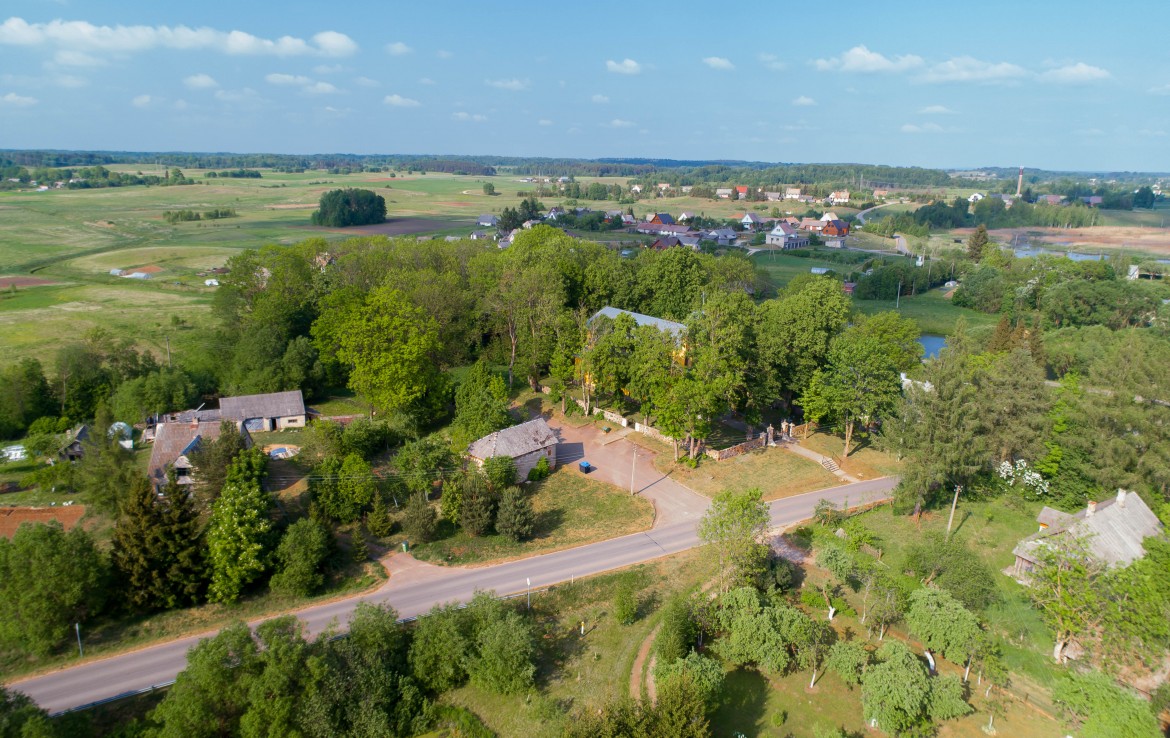 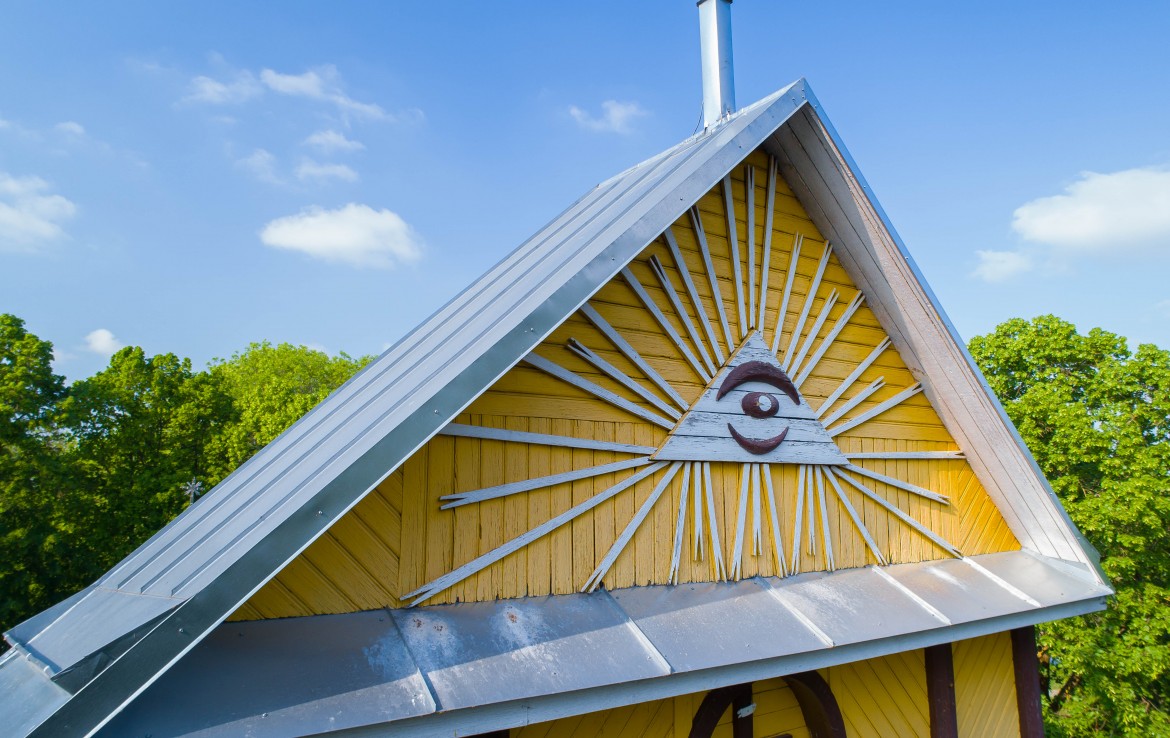 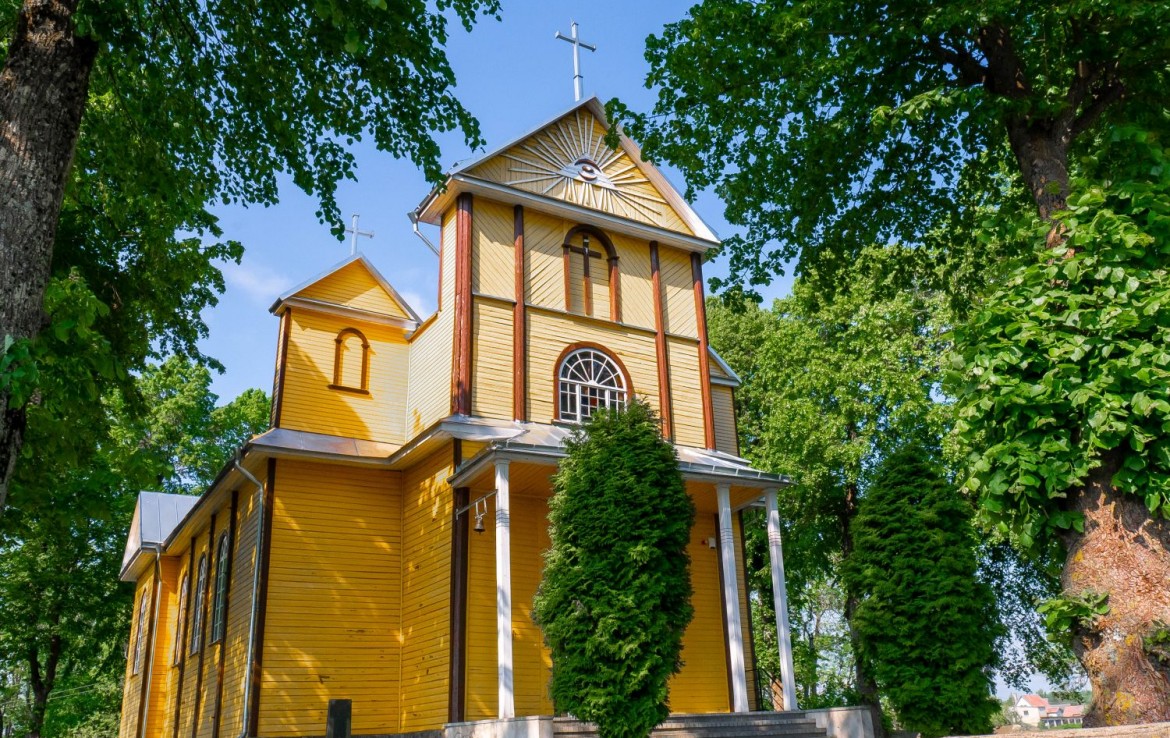