Church of St. Vincent Ferrer and Belfry of Degučiai

Degučiai church of a triangle layout is unique in Lithuania, as only two churches of this type exist in Lithuania, a brick one in Panevėžiukas and a wooden one in Degučiai. It is not by chance that it is often used to represent the unique heritage of our country. The church, built in the 18th century, has both typical and distinctive features of the professional late Baroque art, and elements typical to folk architecture and art of Samogitia region. It is decorated by valuable sacred interior objects of the 18th and 19th centuries and altarpiece paintings.

The history of the church is to be associated with the history of the famous Lithuanian-Polish noblemen family Bilevičius. It is believed that the pioneer of this family was the legendary sister of Vytautas the Great, Mikliausia (Polish – Miklausa, Mikluša). Due to the original documents of Degučiai Church lost during the fire in Varniai, determining the exact date of the church building is complicated: it is thought that in 1735, its construction may have been funded by the Castellan of Mstislavl’s Cathedral Bilevičius, or that it was done in 1750s-1760s by the Major General of the GDL Army Tadas Bilevičius. During the sunset years of the Polish–Lithuanian Commonwealth, representatives of the family had fairly high positions, and the noblemen of that time used to build churches to immortalize their and their family’s honor.

Perhaps not coincidentally, the grand altar of Degučiai Church is decorated by a picture of Tadas’ patron, the Apostle St. Judas Thaddeus, painted in 1821. The other two altars feature the images of patrons of Juozapas, the son, and Vincent, the grandson of Tadas Bilevičius. Although this may be a coincidence, it is likely that the Bilevičiai family also depicted their family history in these images, and considered the church of Degučiai as a temple close to their hearts.
Degučiai Church was renamed as many as three times. In the Pope’s Privilege of 1763, it is mentioned as the Church of the Immaculate Conception of the Most Holy Virgin Mary, and later due to its unusual triangular layout, which symbolizes the Holy Trinity, it was named after the latter. As late as in the 19th century, the church was named after St. Vincent Ferrer, a saint of the Dominican Order originally from a noble Spanish family because of his relic stored there. Now it is stored in a cross-type reliquary of the second half of the 19th century.

The buildings of Degučiai Church ensemble are compact in volume, low, stumpy, with walls slightly tapering upwards. The church of an unusual triangular layout is complemented by a tetragonal belfry of simple shape. The appearance of the church has changed very little over the past two and a half centuries. It is made of hewn logs, the outer walls are boarded with planks, the former shingle roof has been replaced by sheet steel one during reconstructions. The church roof is decorated with a neo-Baroque dome with a bell.

This architectural ensemble is a perfect example of Samogitian culture, craft tradition and art: the churchyard is decorated with a chapel, a wooden cross with especially high value folk art sculptures, while the church, the belfry and the chapel are crowned with hand-forged ornamental crosses raised on different peaks.
The main decoration of the church interior is the ensemble of three late Baroque wooden altars. The grand altar is expertly decorated with abundant openwork carving of acanthus leaves and other ornamentation typical of the Baroque. It is a most masterful example of openwork Baroque carving in Lithuania. The side altars or their fragments were restored in the 19th century. 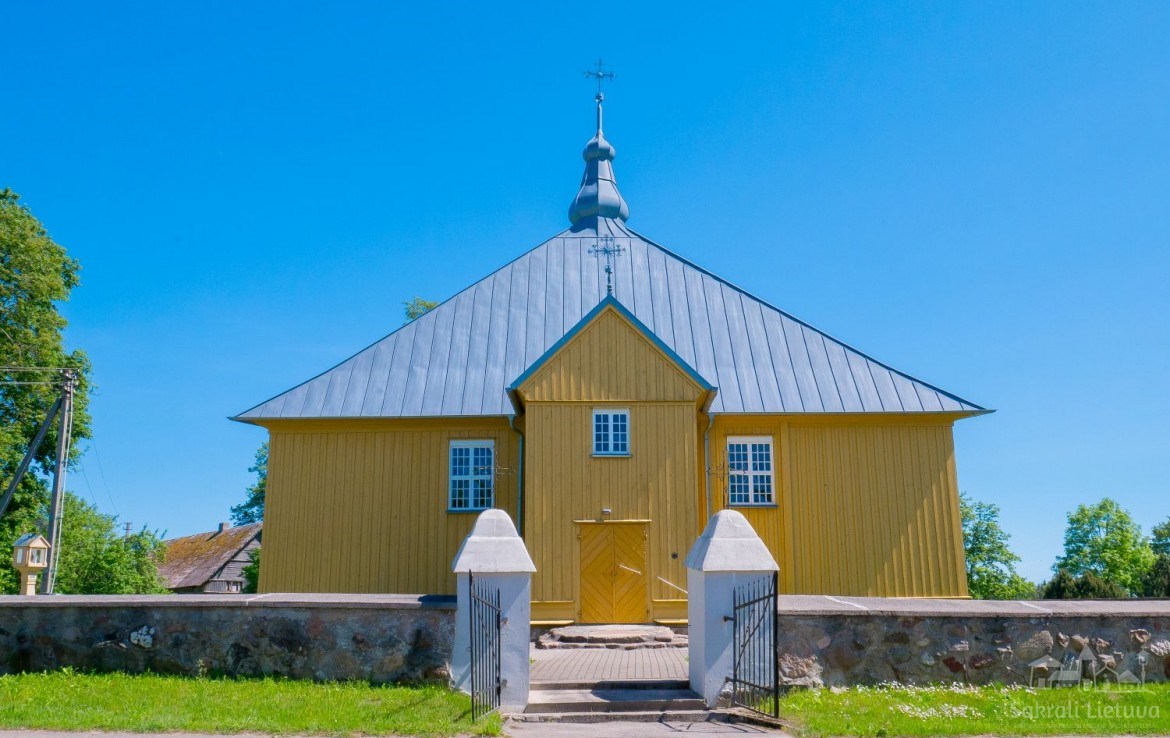 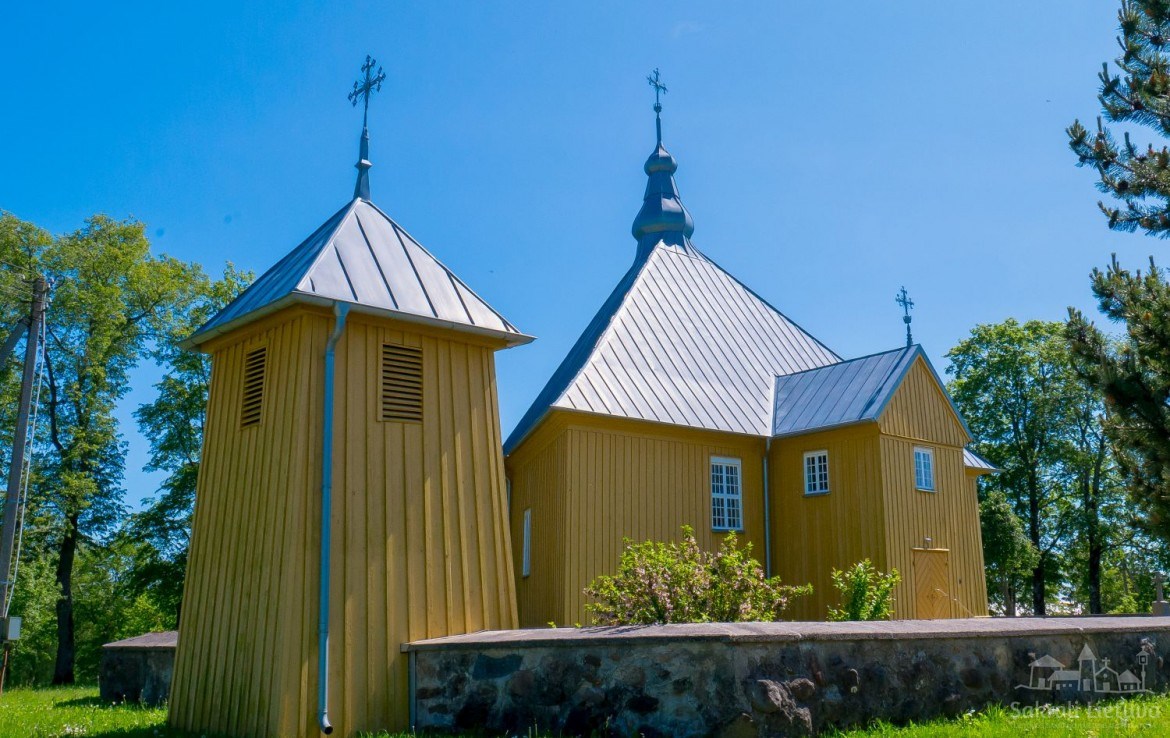 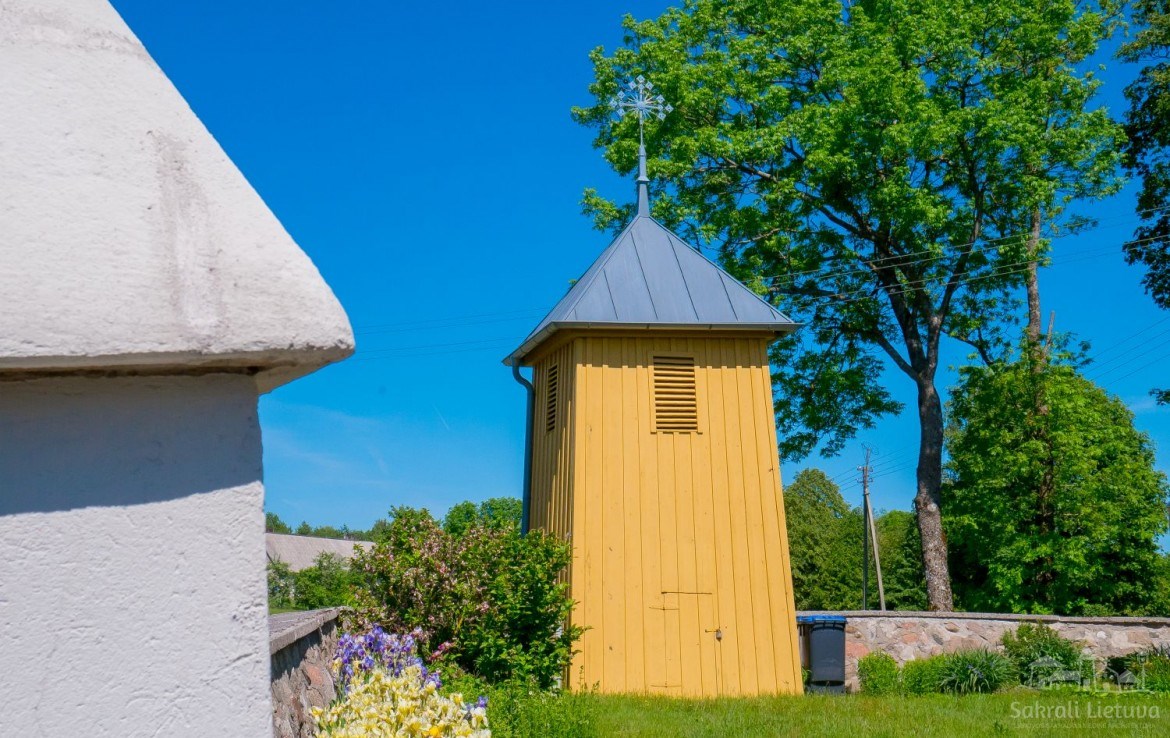 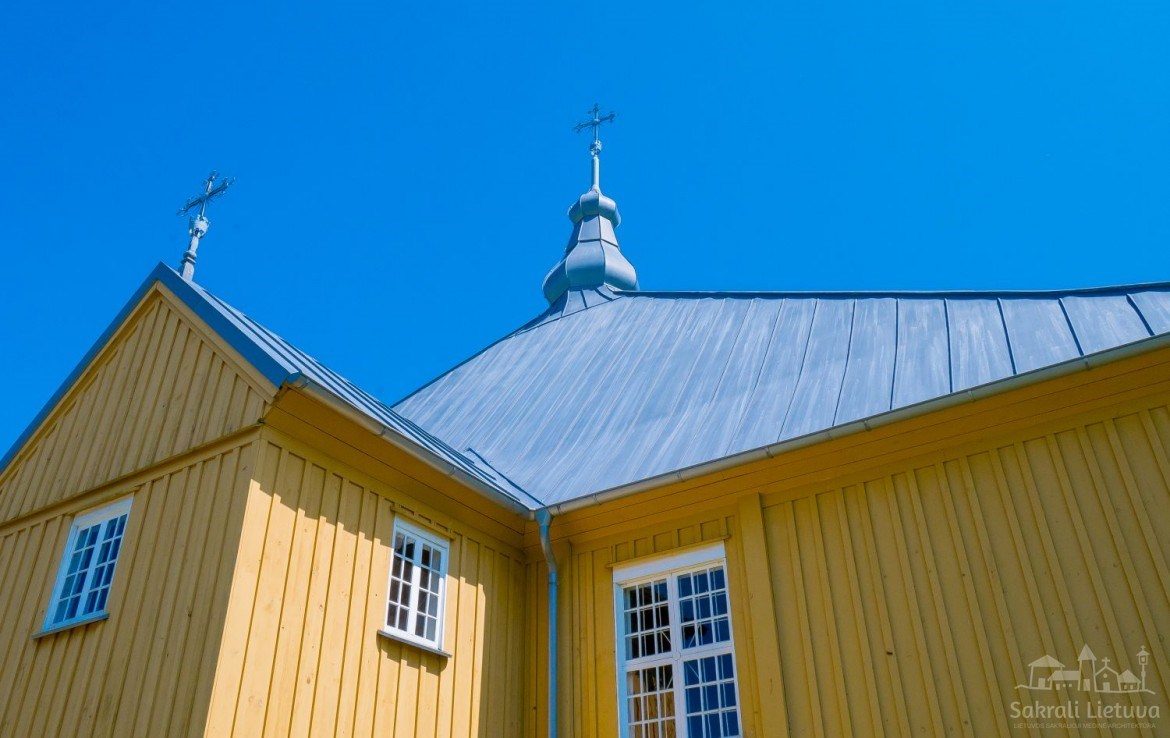 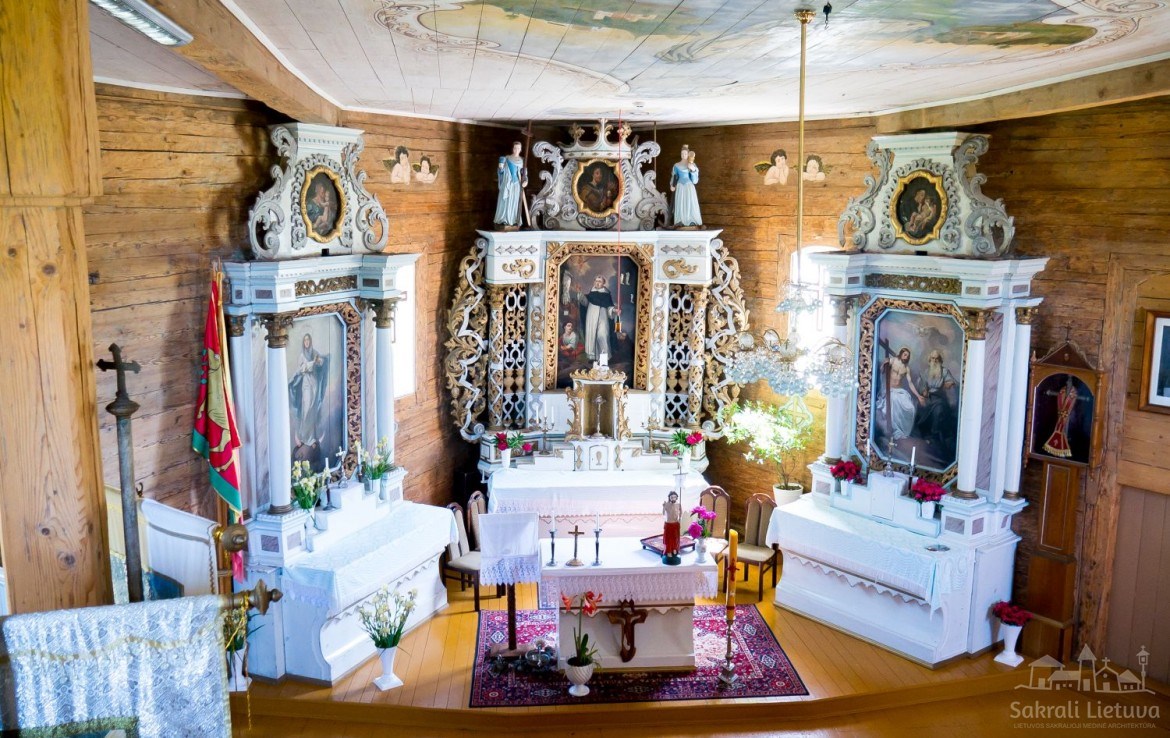 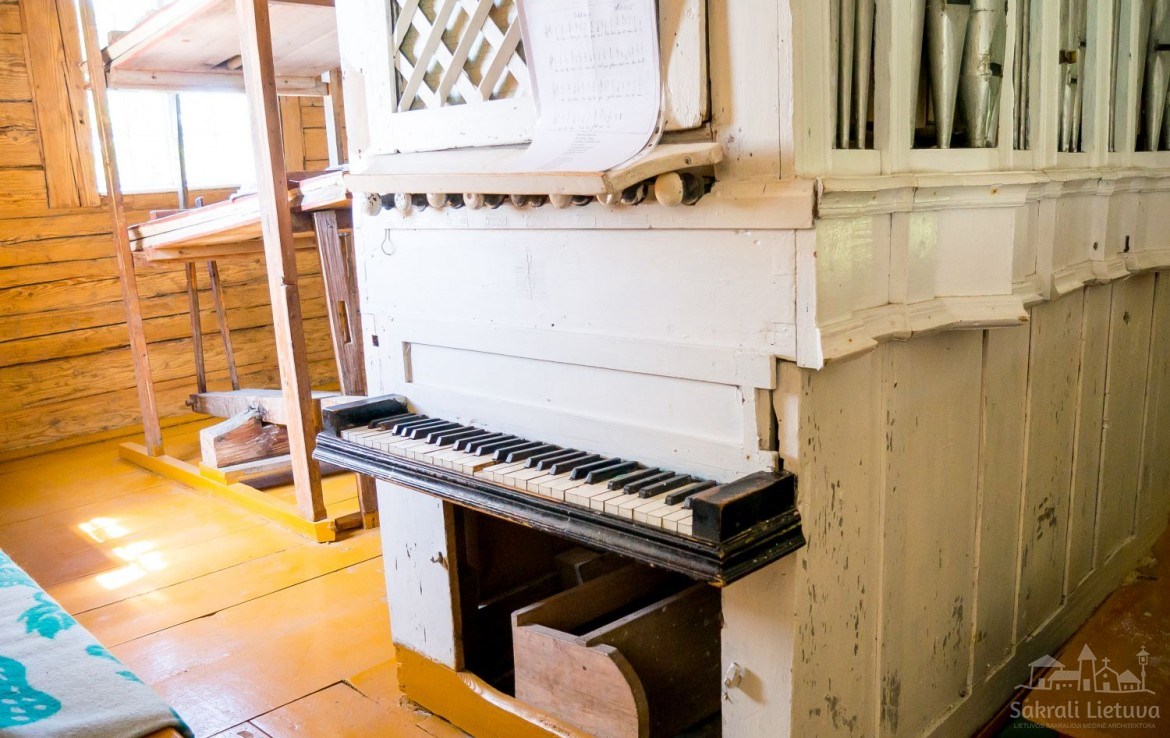 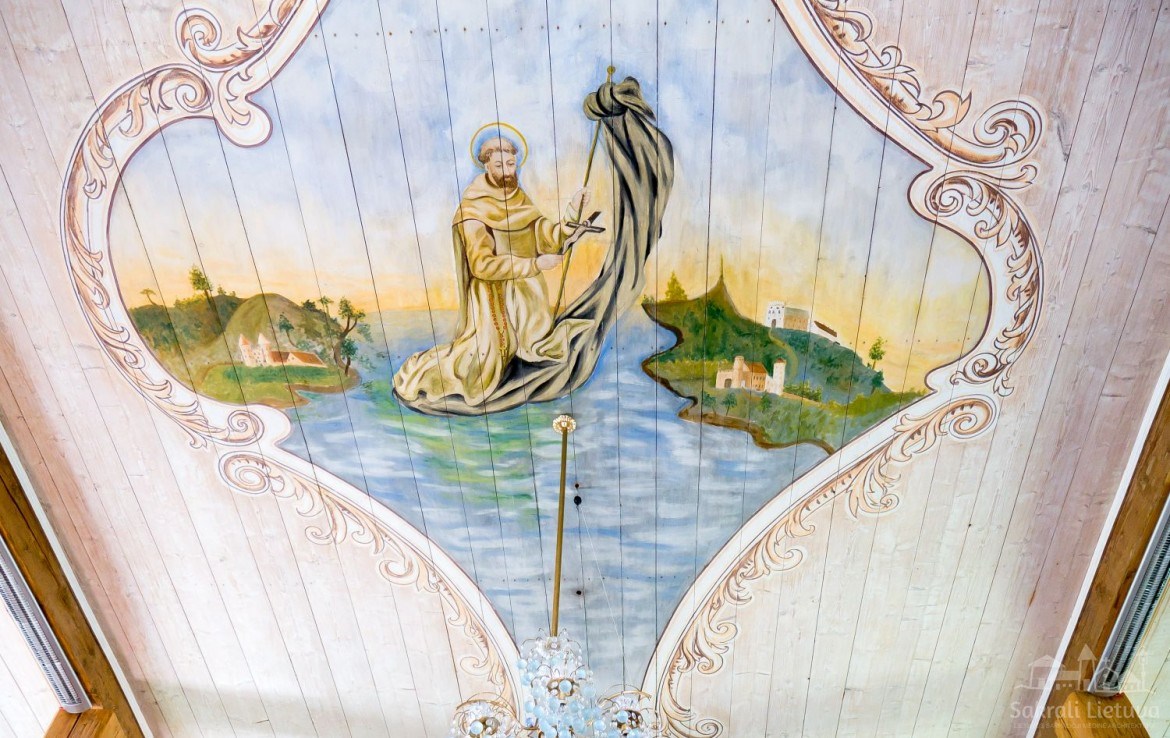 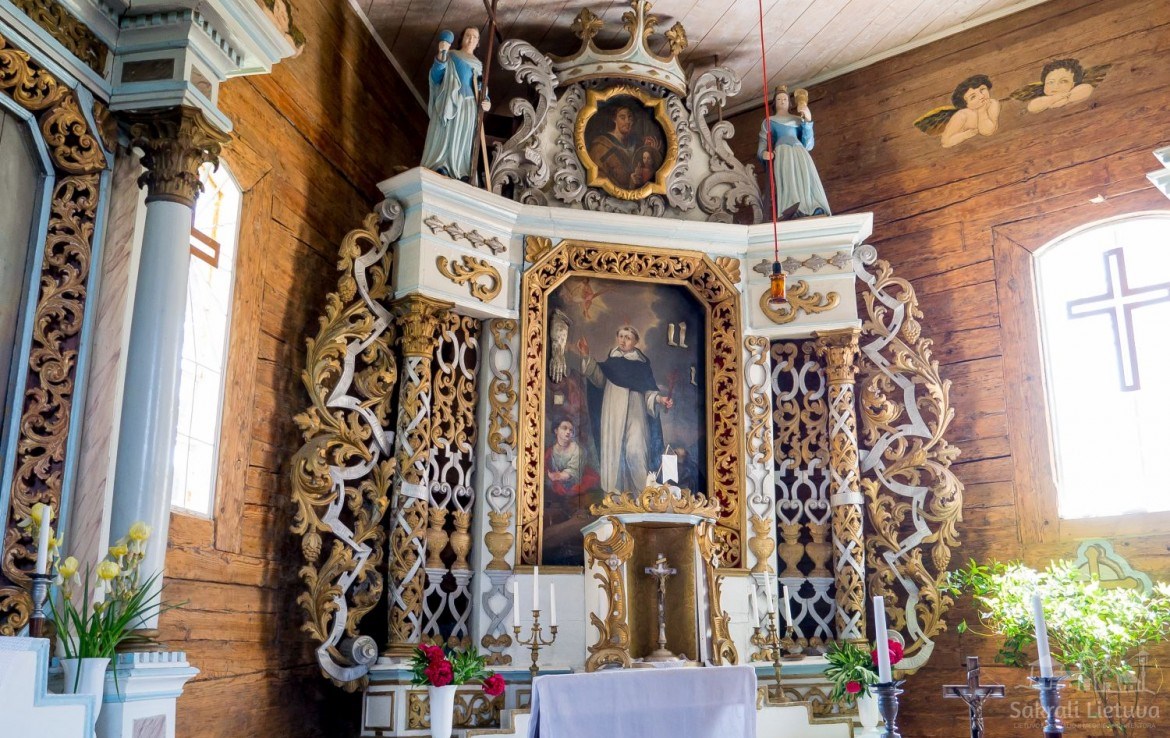 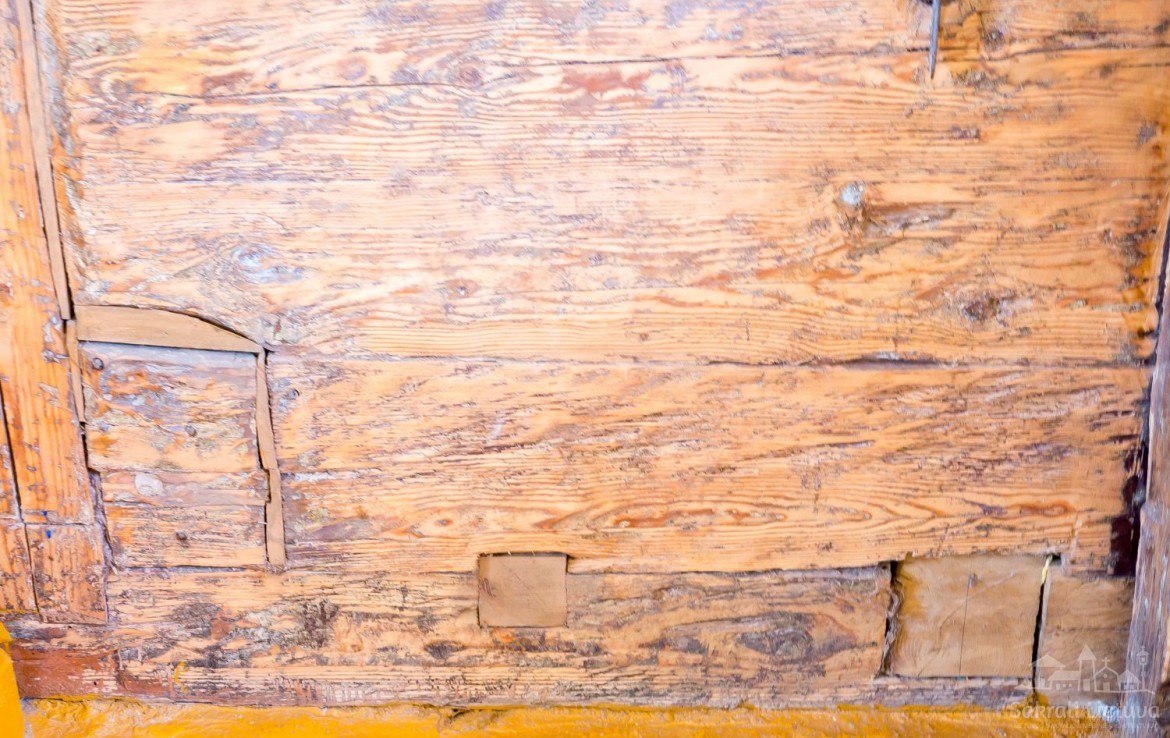 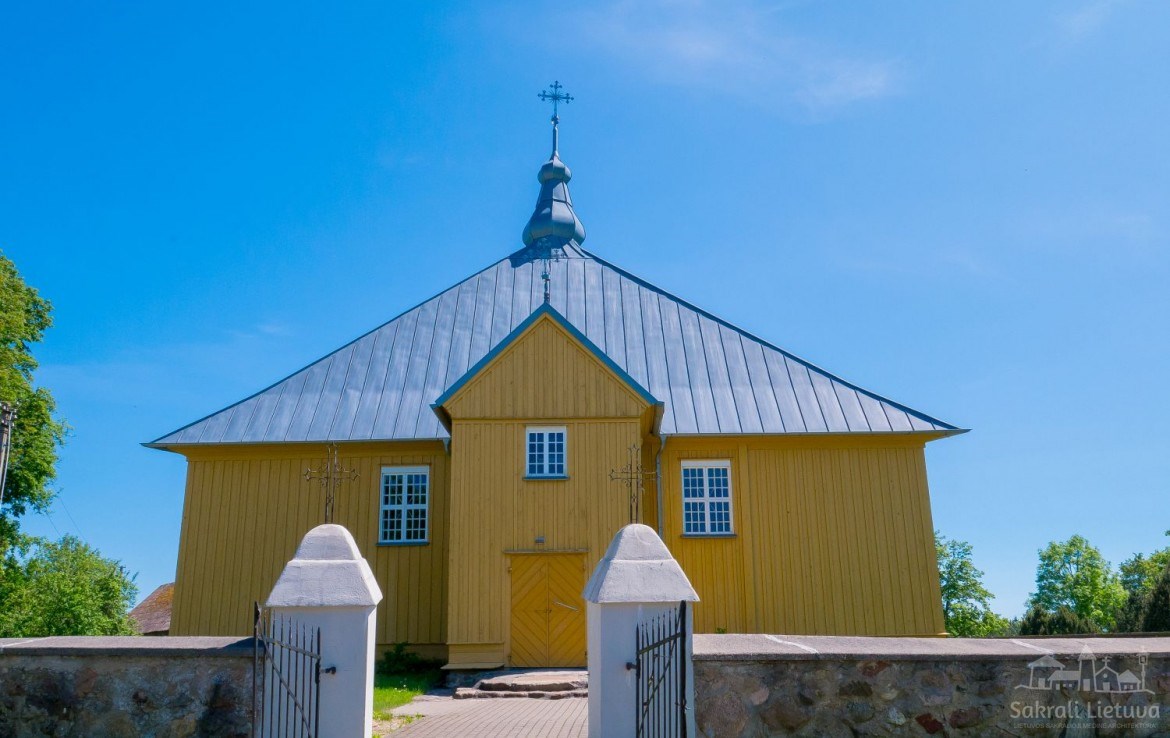 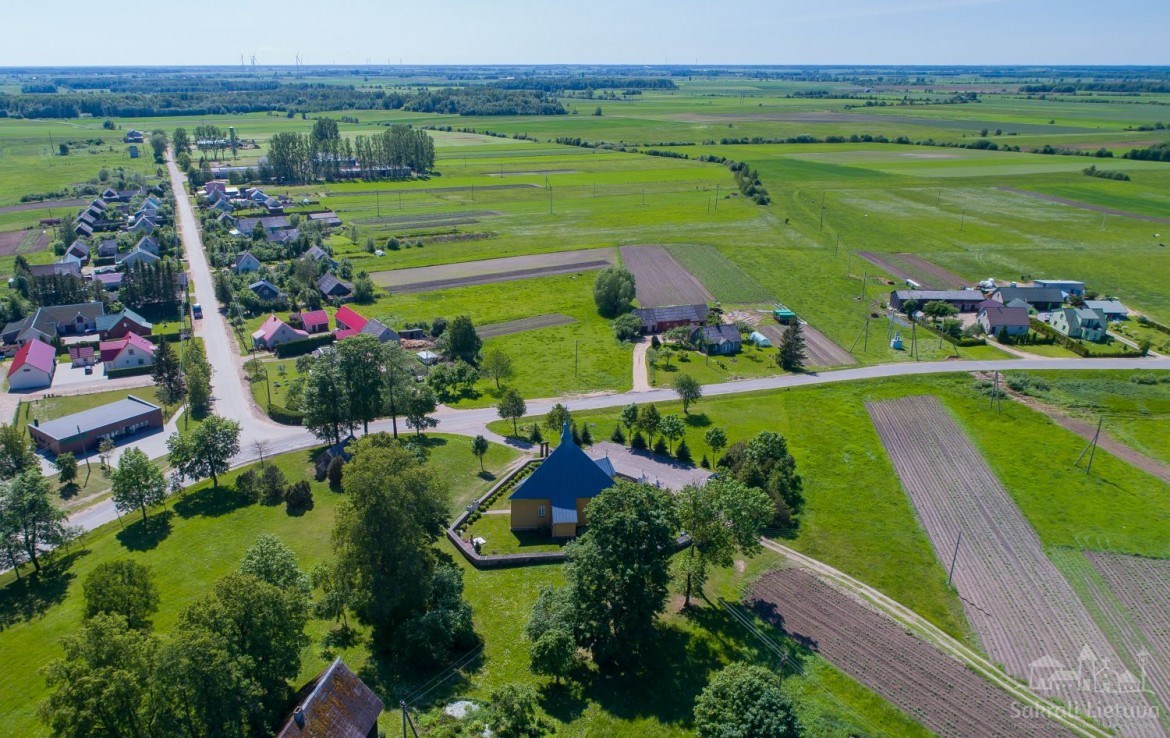 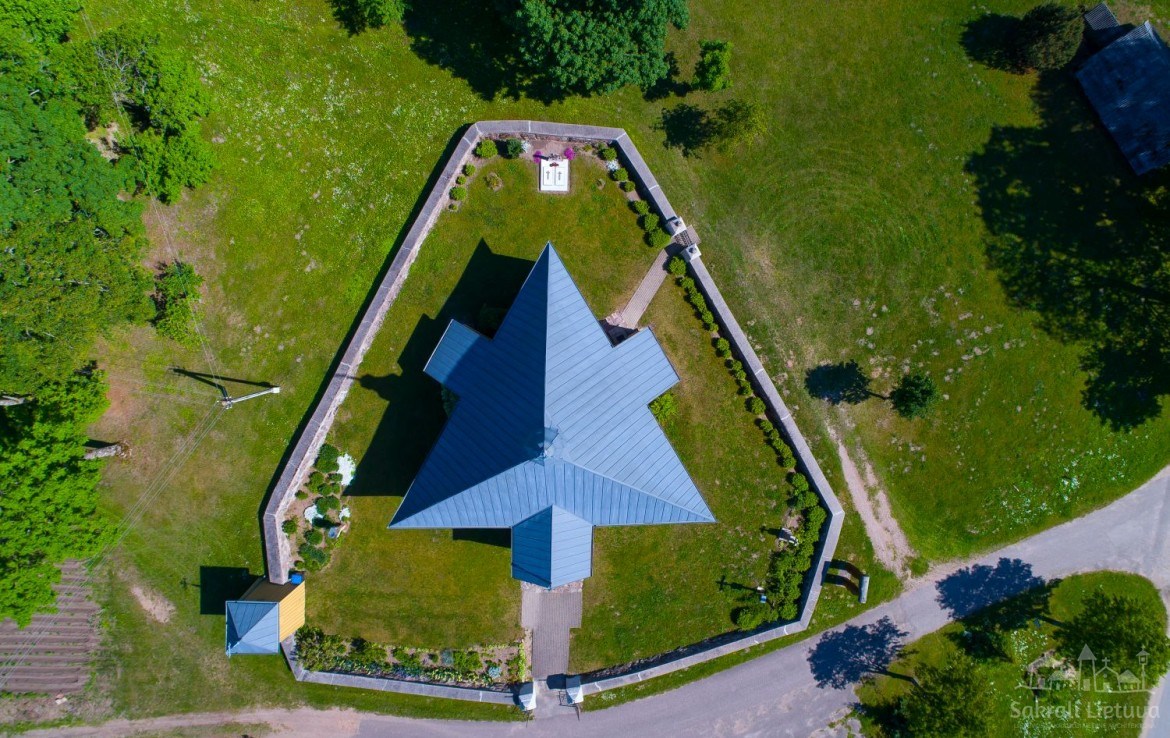 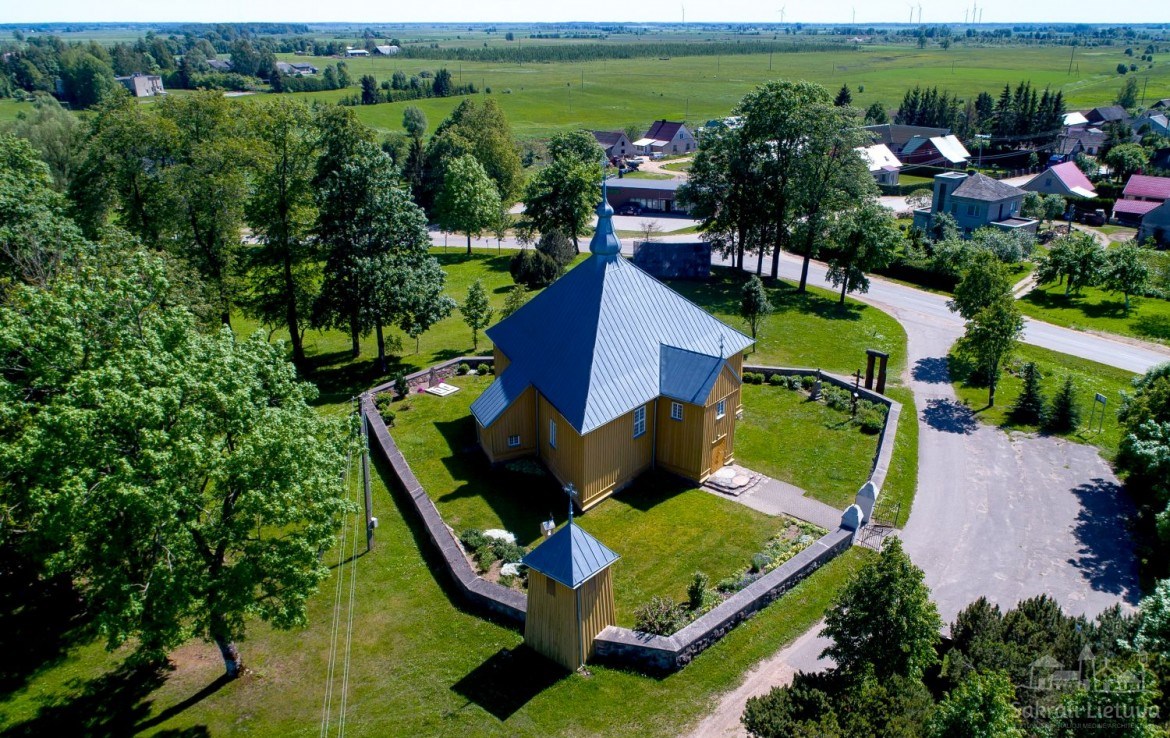 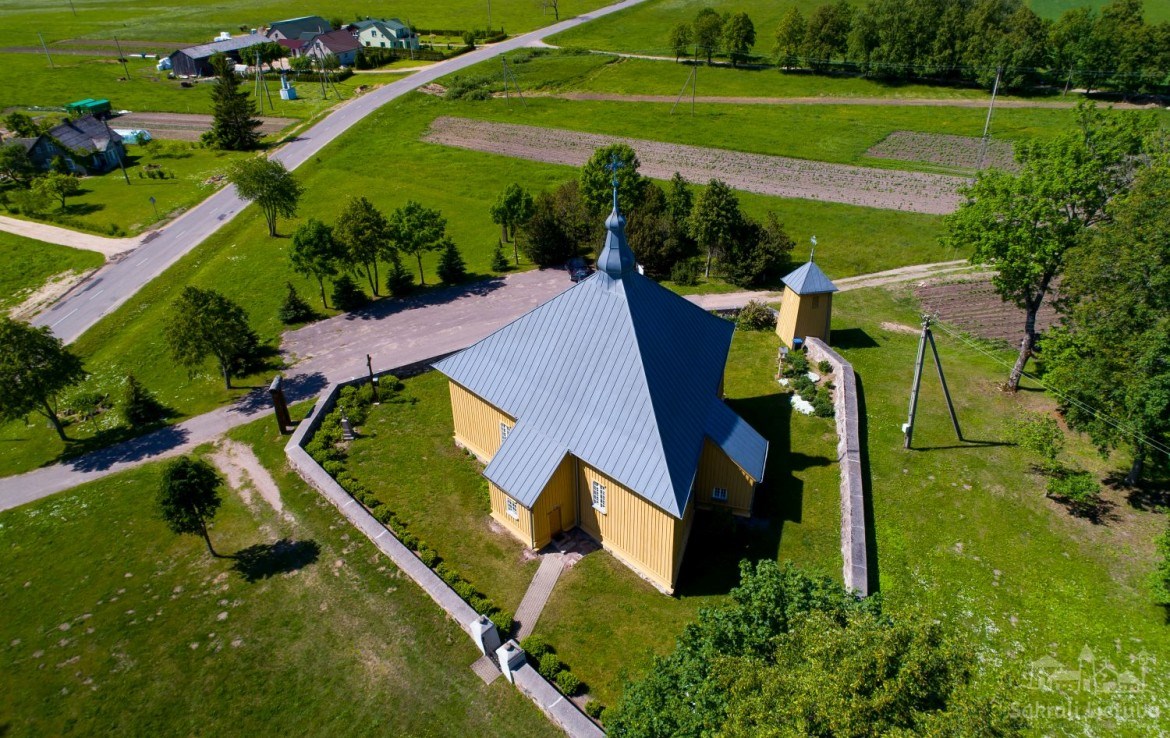 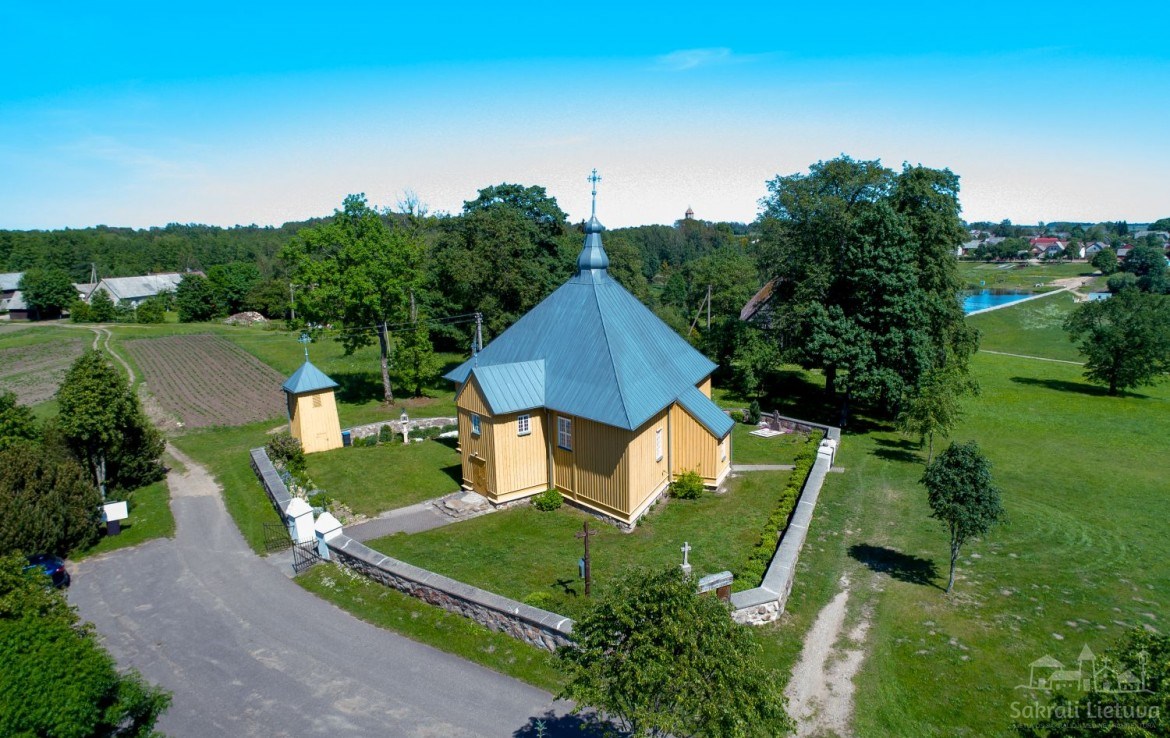 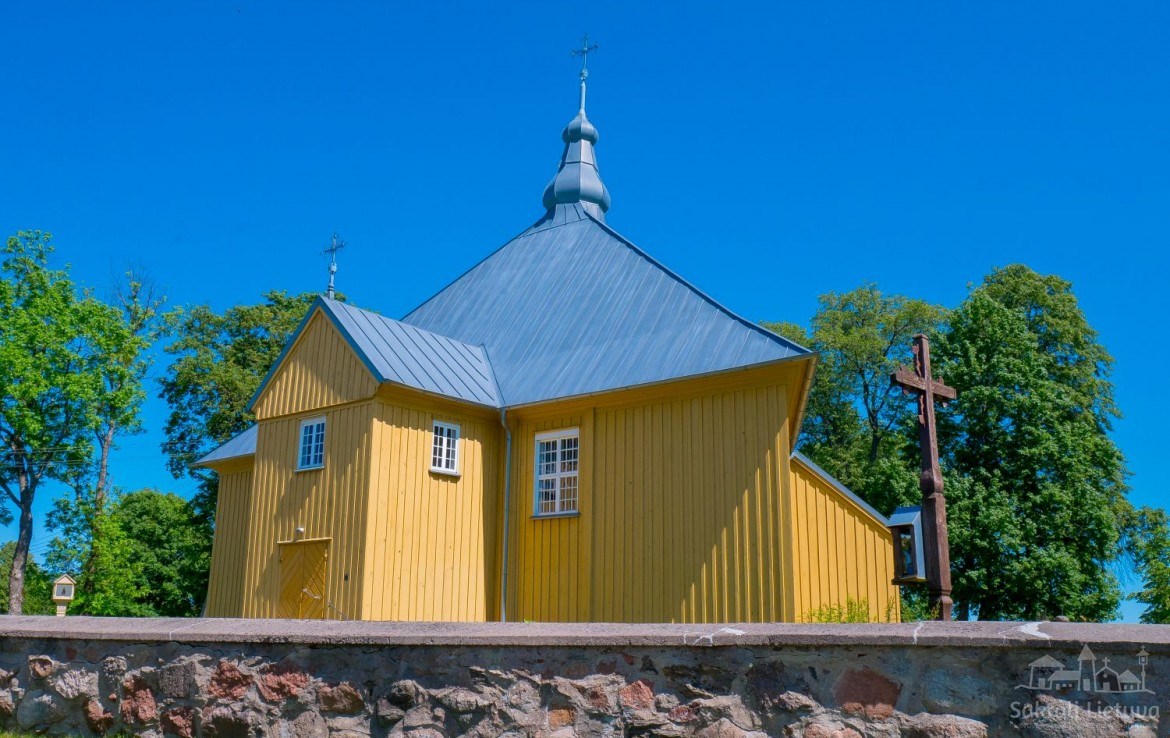