Alsėdžiai has long been the center of the Samogitian Diocese: in 1421-1842, the town belonged to Samogitian bishops, and their permanent residence was established there since 1465. Around 1465, a bishop’s manor was built there. In 1842, the bishop’s lands were nationalized, and since 1850, bishops no longer resided in Alsėdžiai, and the Government took over the manor house in 1857.

The first churches were built at the foot of Mount Alka. At the request of the bishop, the Grand Duke of Lithuania Kazimieras granted 50 valakas of land and 2 lakes to the church. In 1793, after digging off of a part of Mount Alka, the present church was built there. A chapel was built to replace the old church.
The church layout is rectangular, with a three-walled apse and two turrets. The interior features three naves and eight wooden Baroque altars. The fence of the churchyard is made of brick, with pillar gates.

The church is Basilican, with three naves and without a tower. The building layout is symmetrical with respect to the longitudinal axis. The central nave protrudes above the lateral ones and flows into the three-edged apse at the eastern end. The central nave has a massive shingle roof, which is three-sided above the apse. The top of the pediment features a turret of two rounded, tin-plated elements with a cross. The lateral naves are lower, with single-pitched, rather flat roofs. Inside there is an enclosed ante-nave, and above it is a balcony with a turned balustrade fence for choir and organ. The remaining space is divided lengthwise into three naves. Supports made of three walls joined together at right angles are used there instead of columns, and they divide the lateral naves into chapels. At the other end of the central nave, turned balustrades enclose the apse, and the presbytery is separated at the ceiling by two cords that are supported by profiled cantilevers. The latter element is echoed in other areas of the interior space. Sacristies are located at the ends of the lateral naves. A pulpit and a confessional below it are located on the right side of the apse. The central altar and two smaller ones in the apse are baroque in shape, with spiral columns. Other altars have straight columns. In 1907-1908, the church altars were renovated.

A wooden 18th century belfry is located next to the church. The building volume arrangement is composite, it integrates three sections of different sizes and shapes into one and has the base of a square layout. A short lower section narrows towards the top. The middle section volume dominates the belfry, which above it is surrounded by a small roof, and the upper part is crowned by a four-sided pyramidal roof, finished with a circular, tin-plated pedestal with openwork “little sun” cross. The third storey walls include sound holes closed with one sided shutters. The facade facing the church includes a door and a small window above it. Inside, the belfry has three floors, connected with a wooden staircase. On the third floor, directly connected to the roof, three bells are installed on wooden beams. They are controlled by an electric motor in the church (installed in 1974). 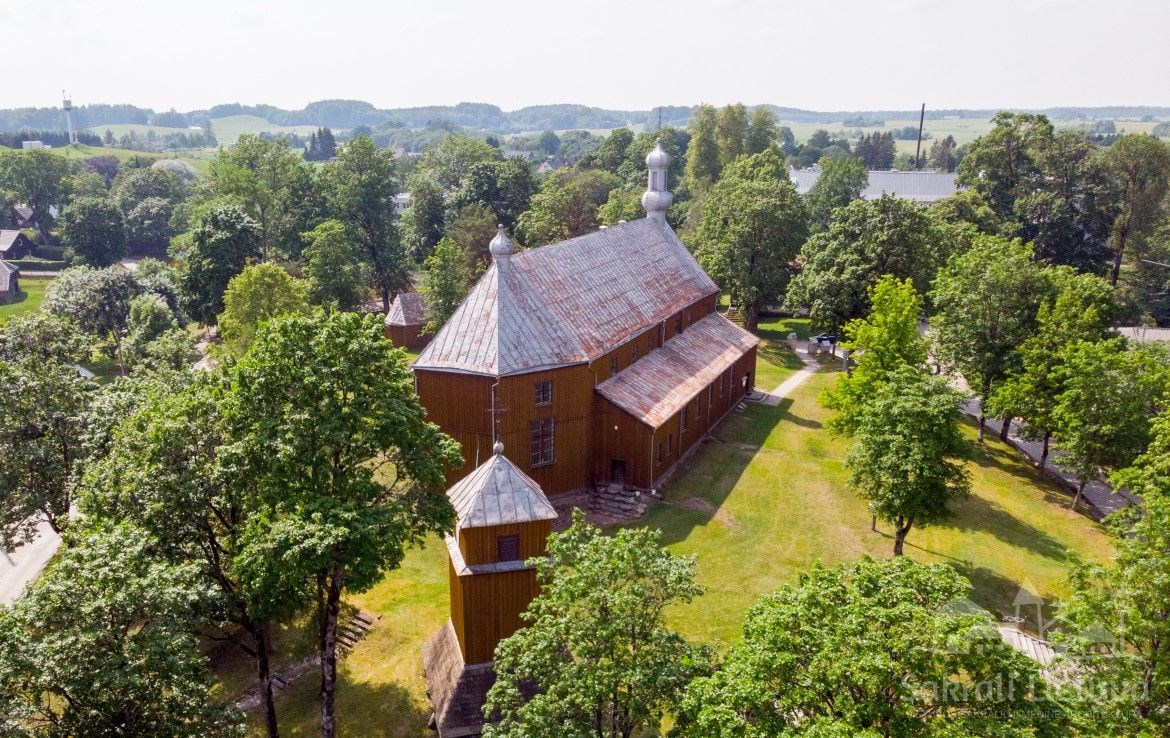 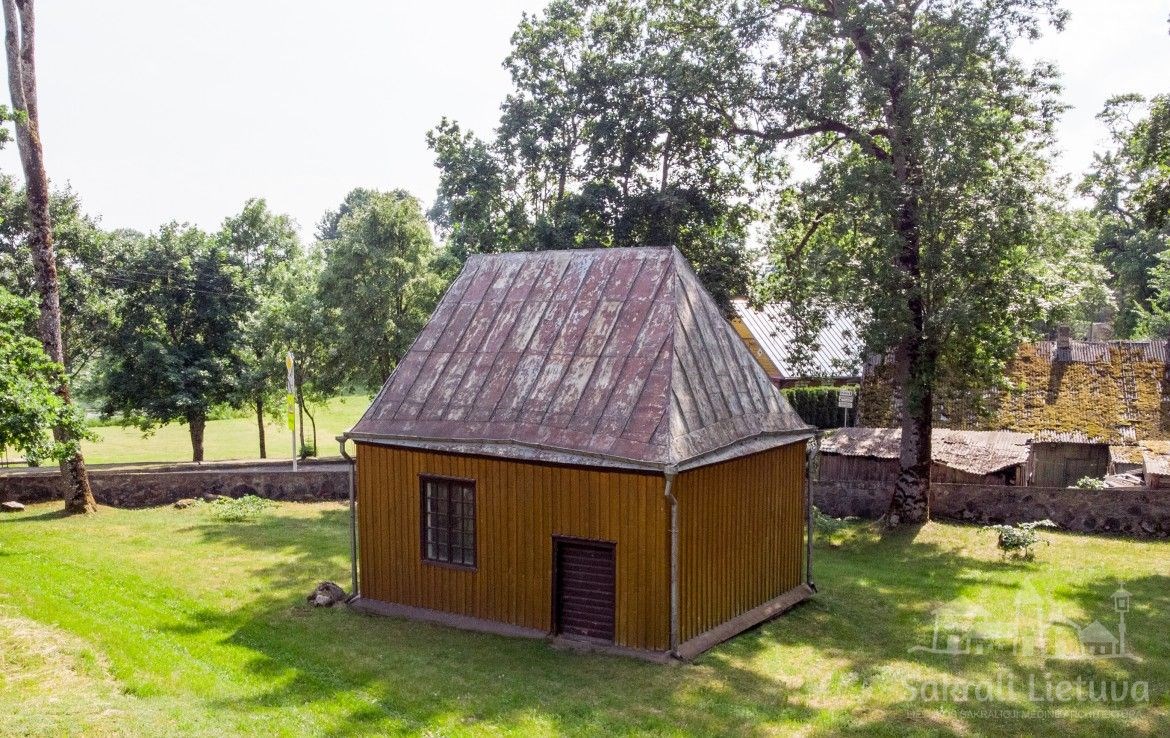 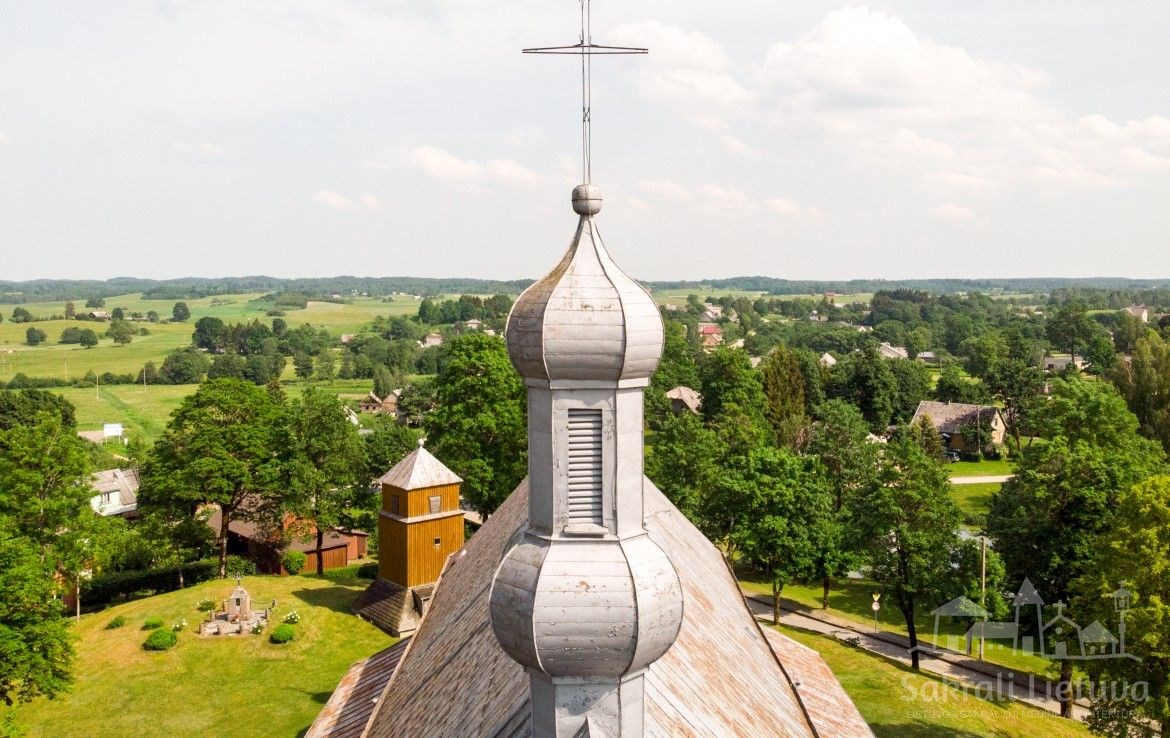 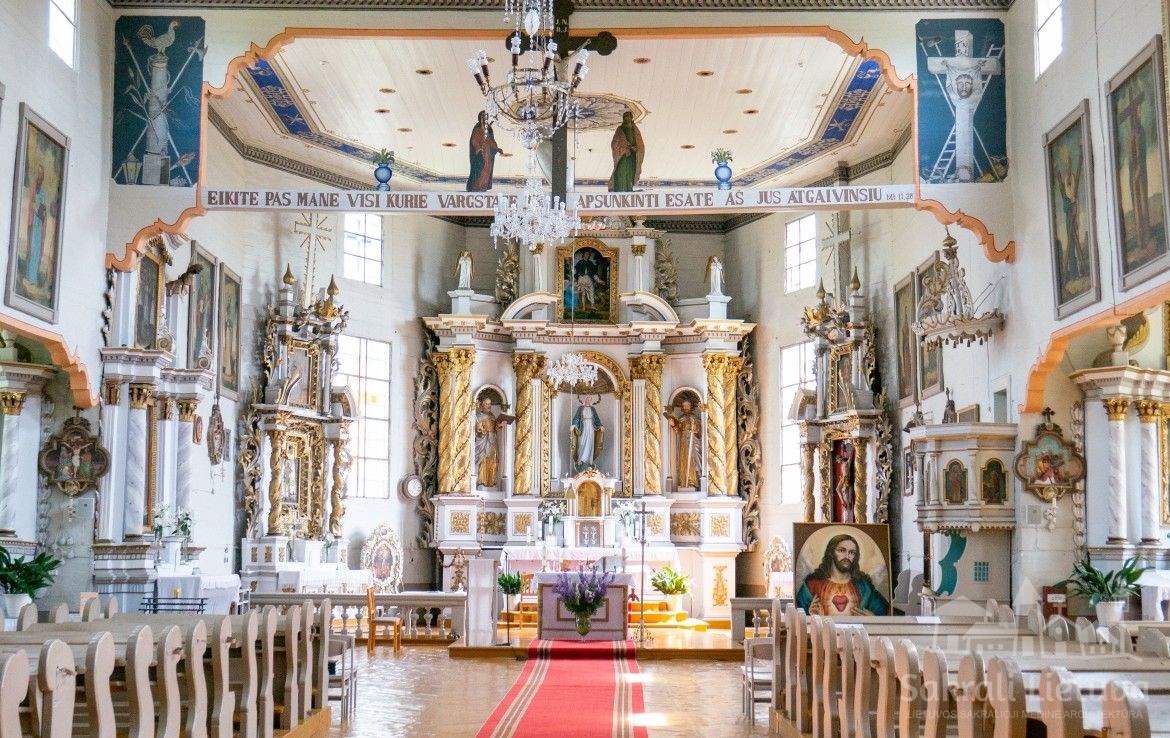 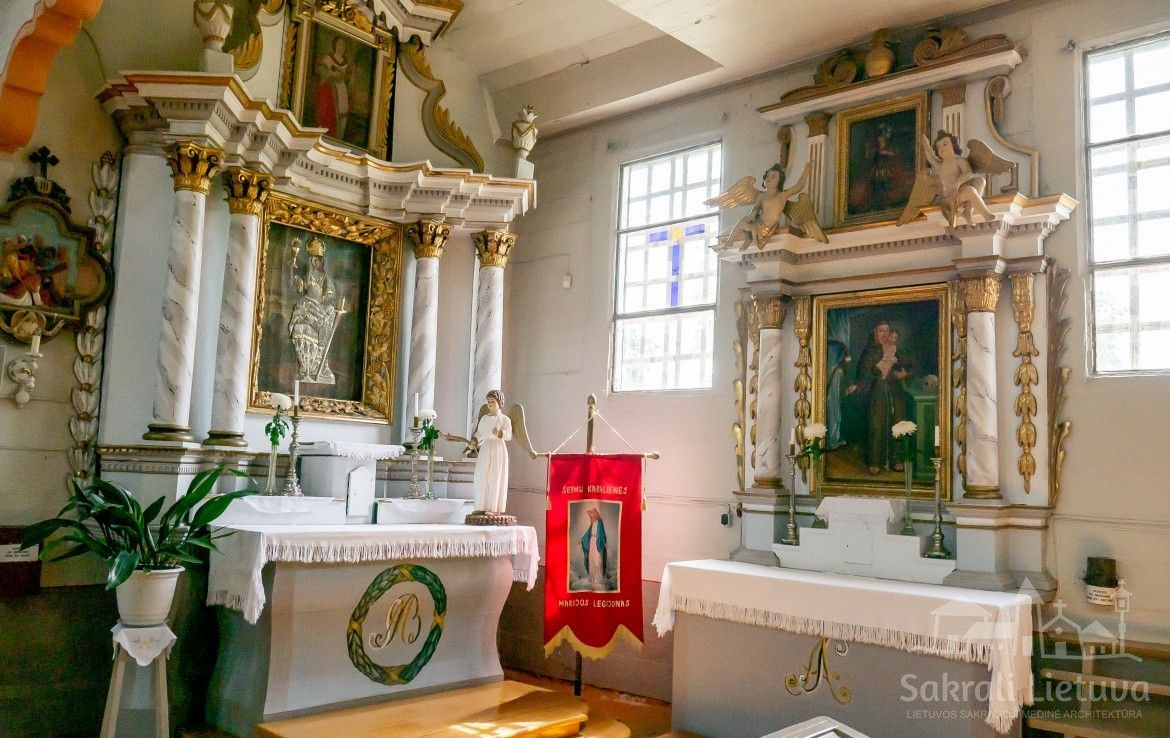 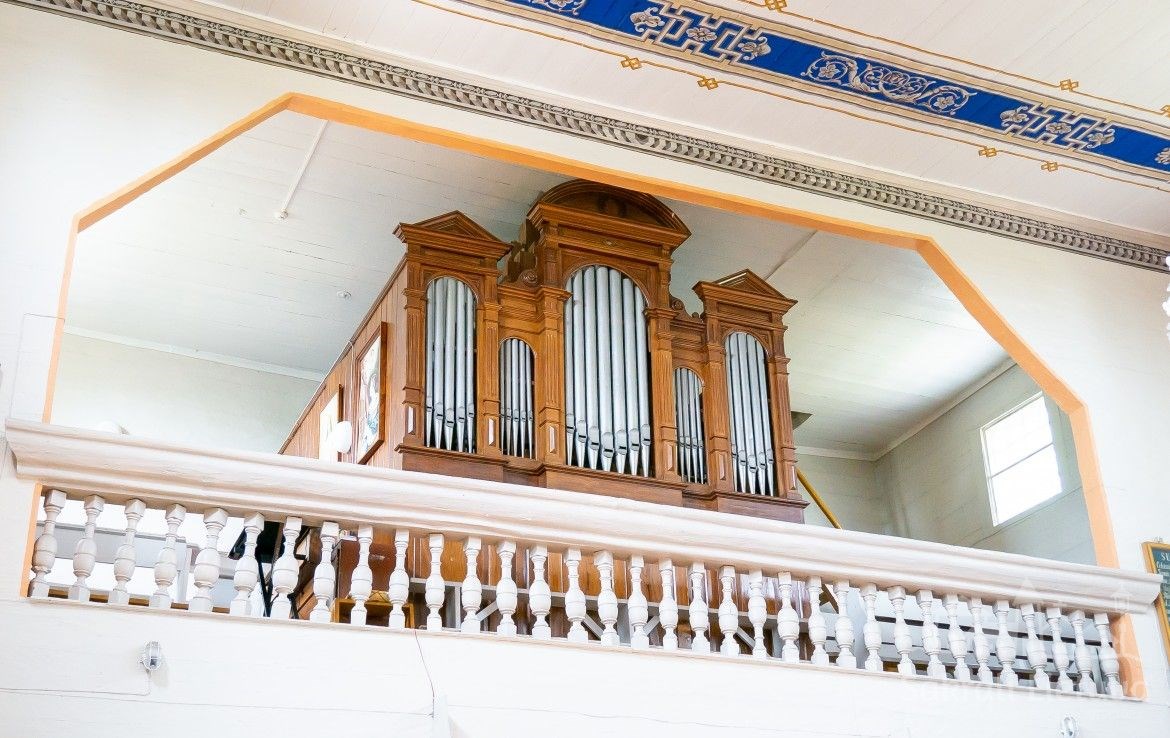 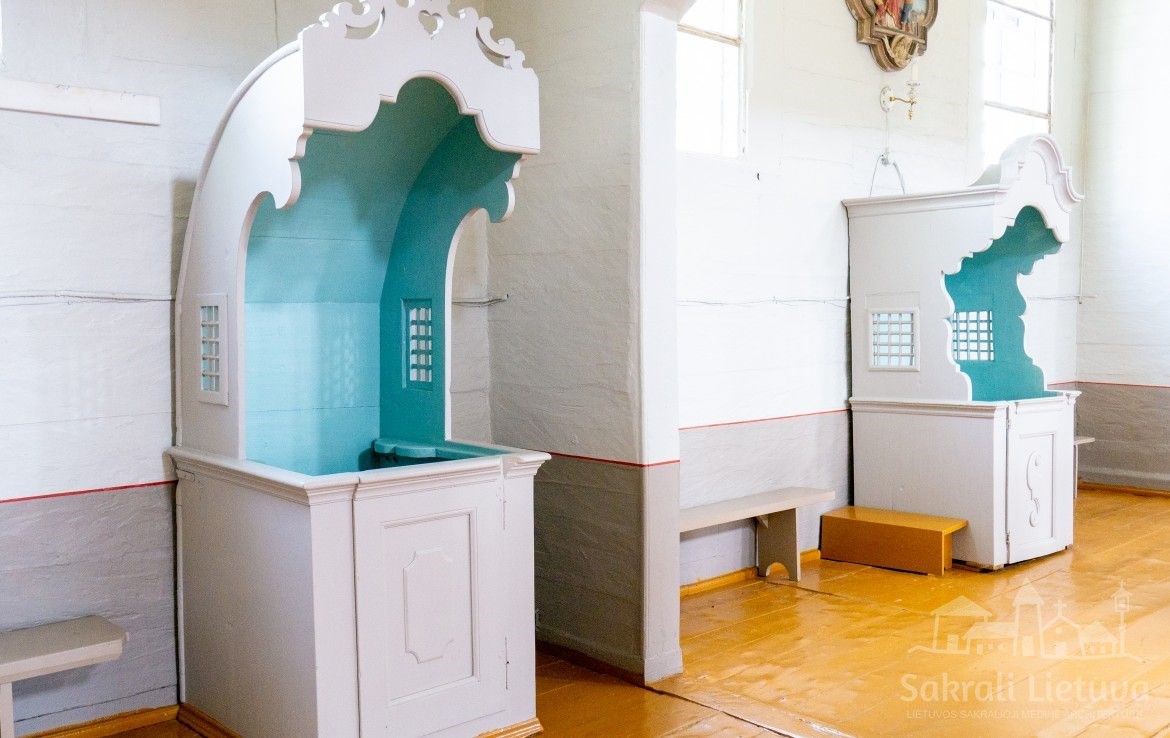 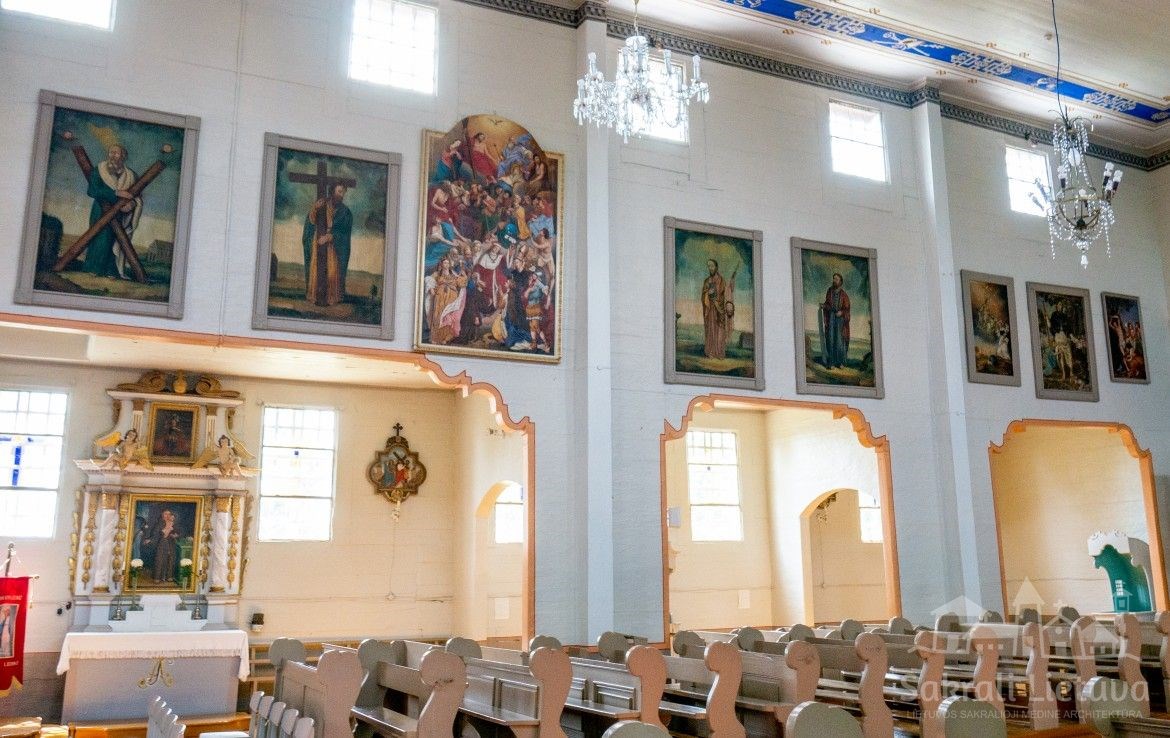 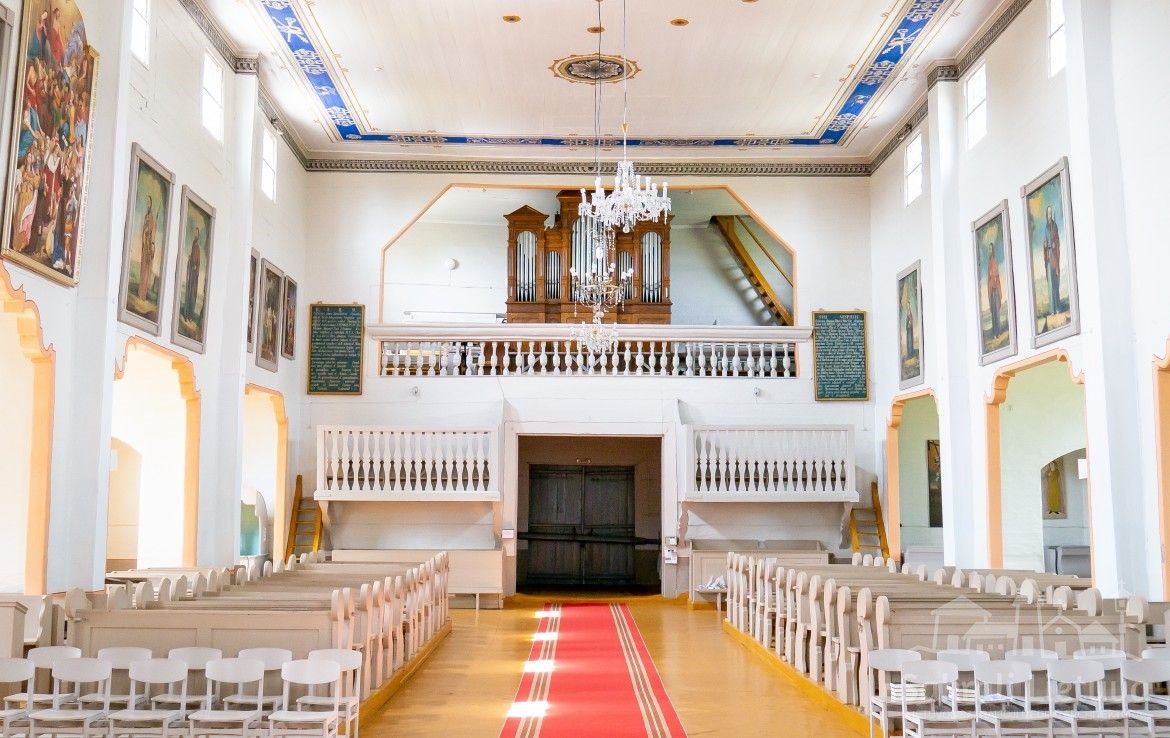 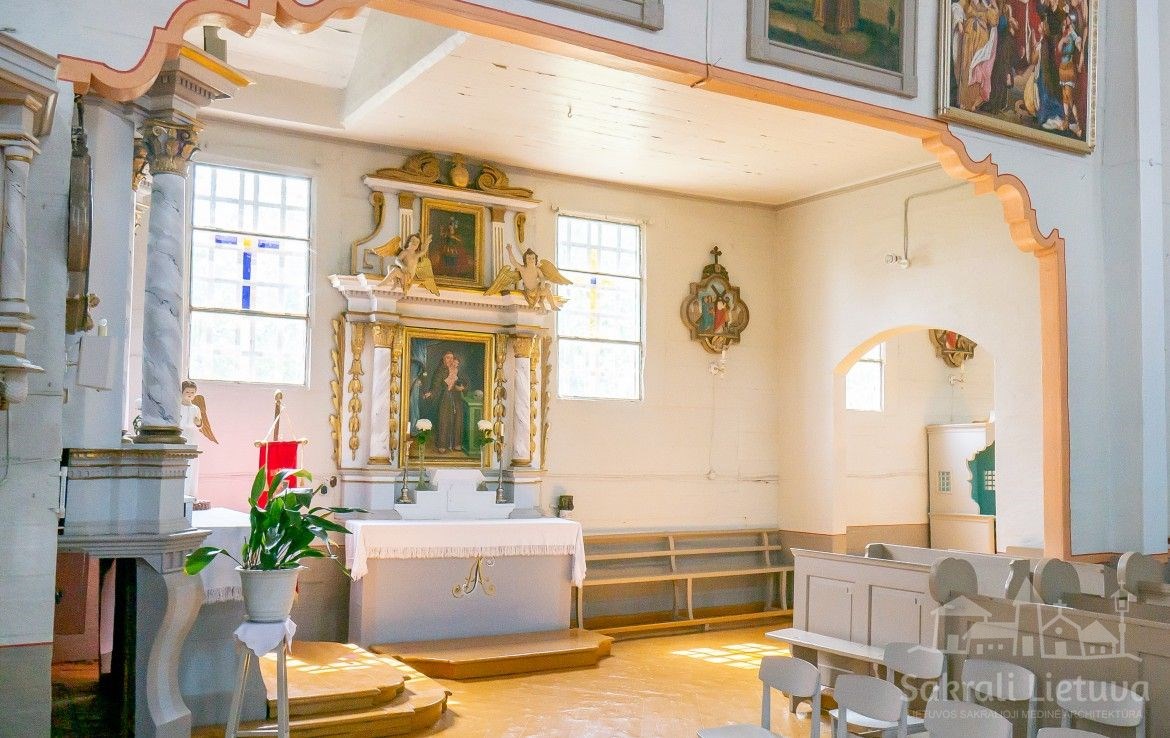 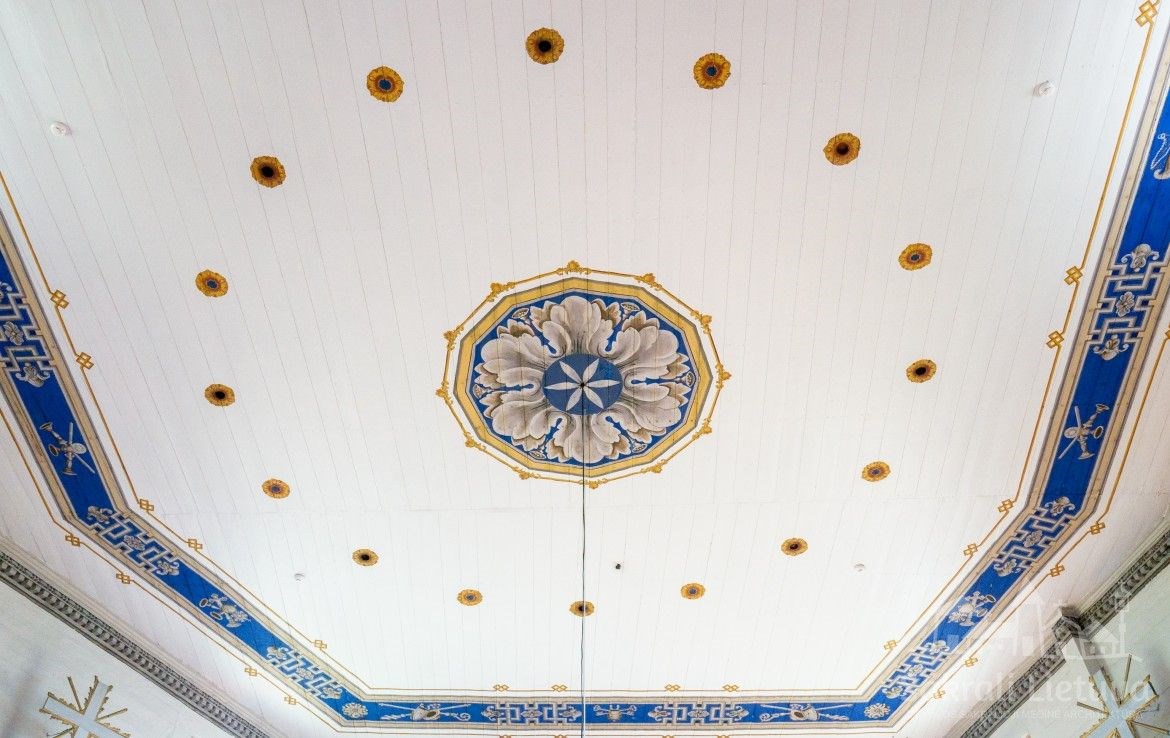 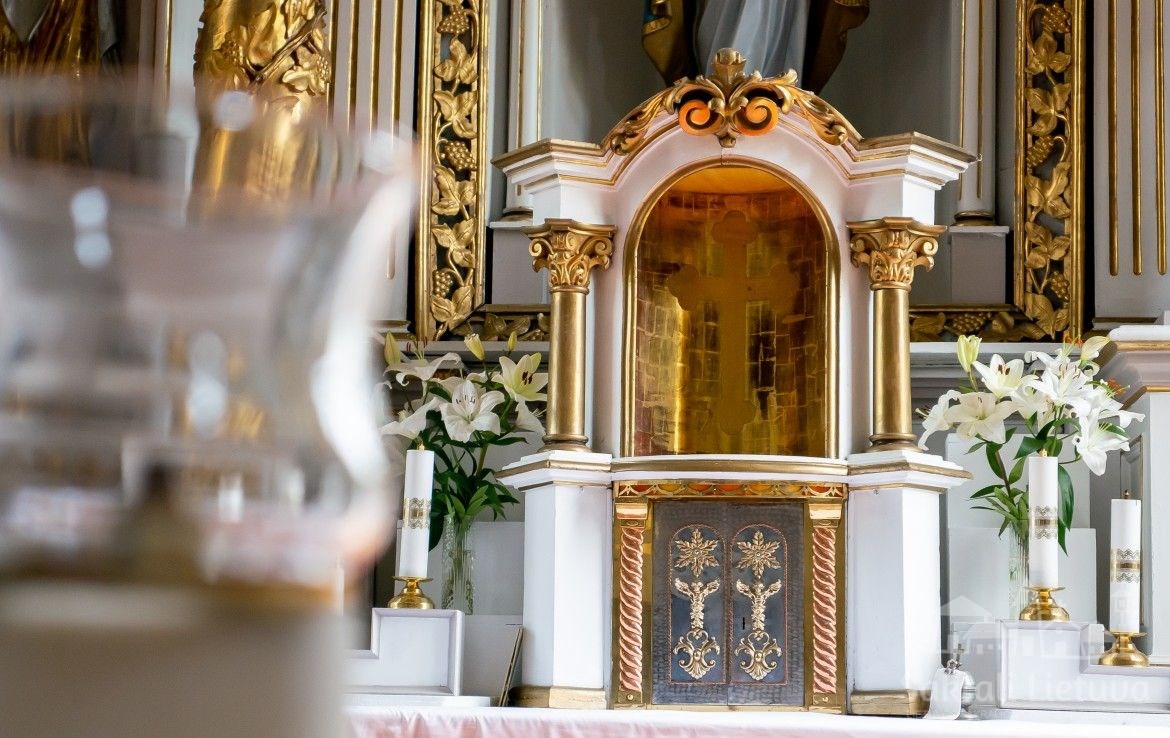 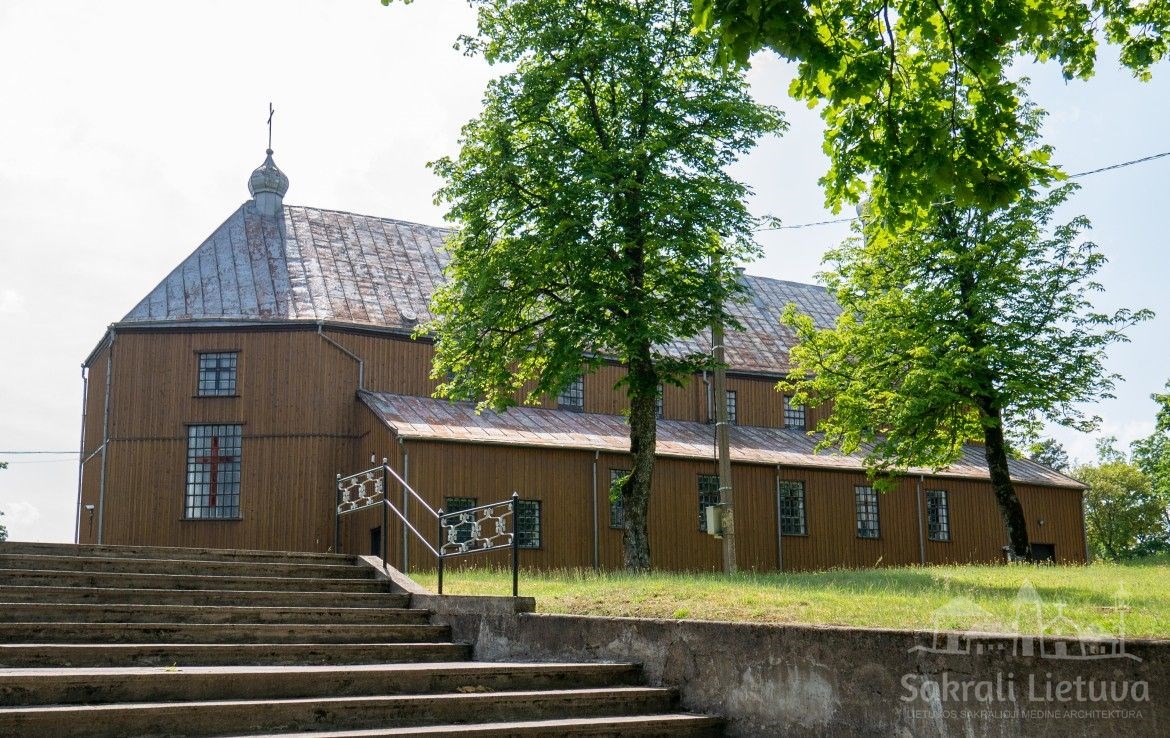 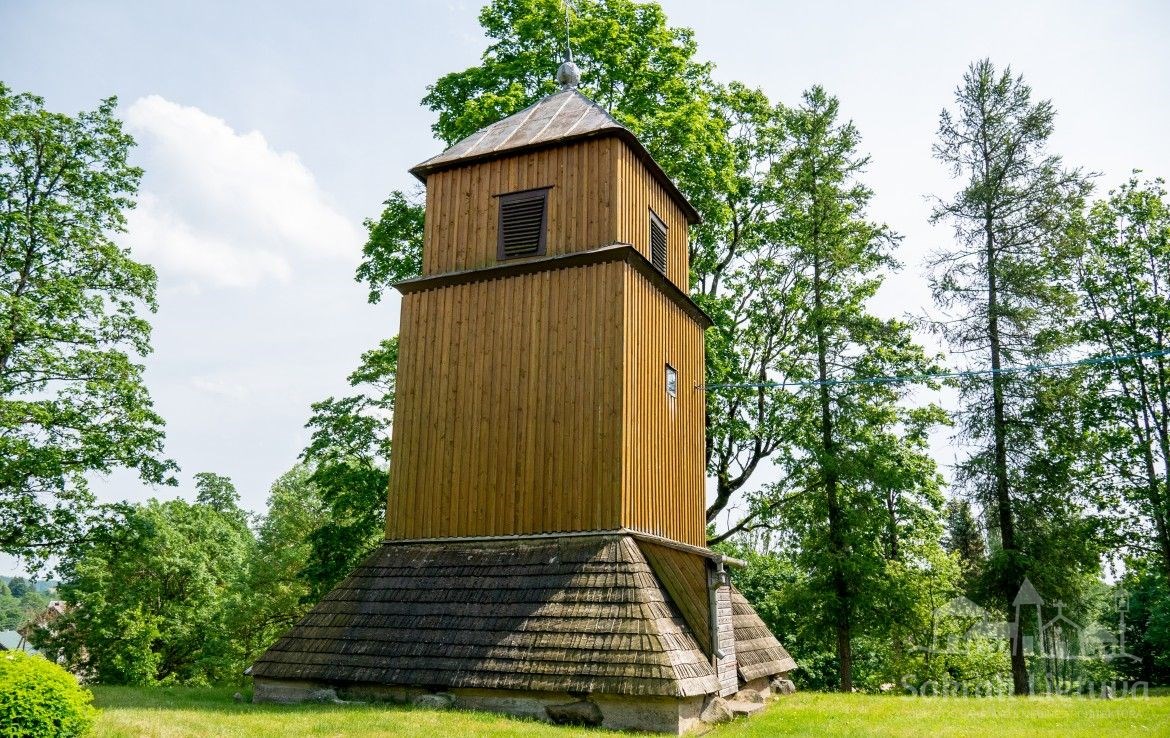 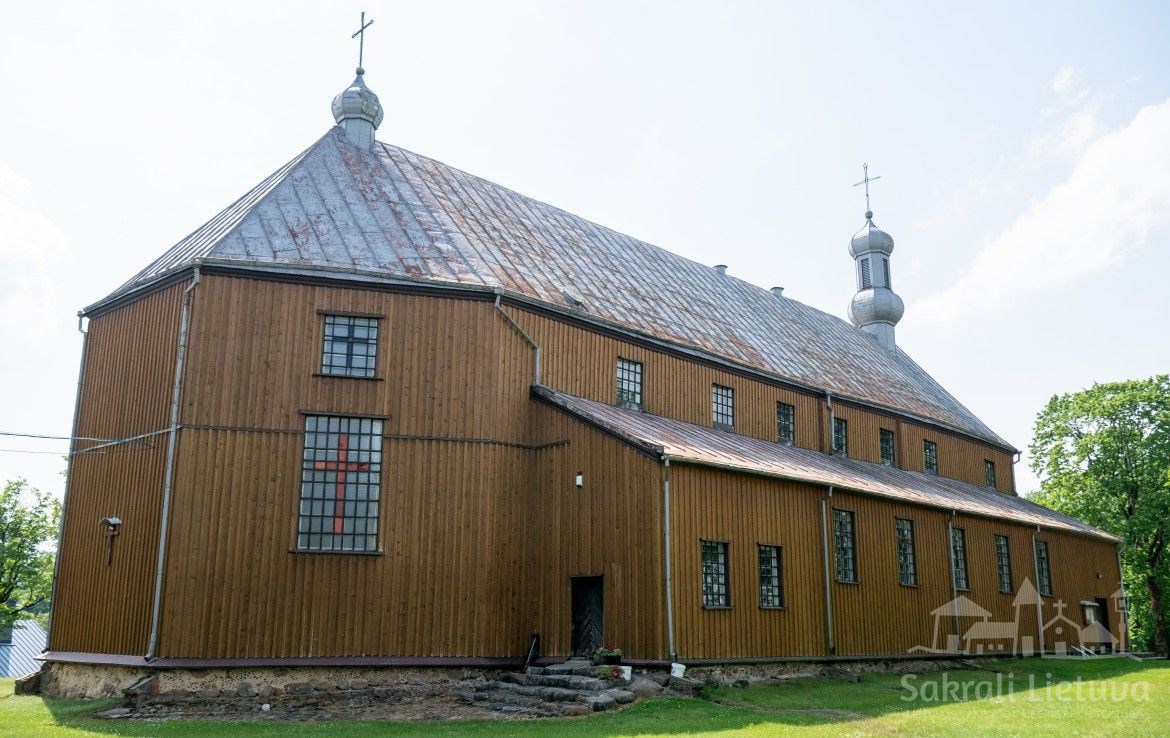 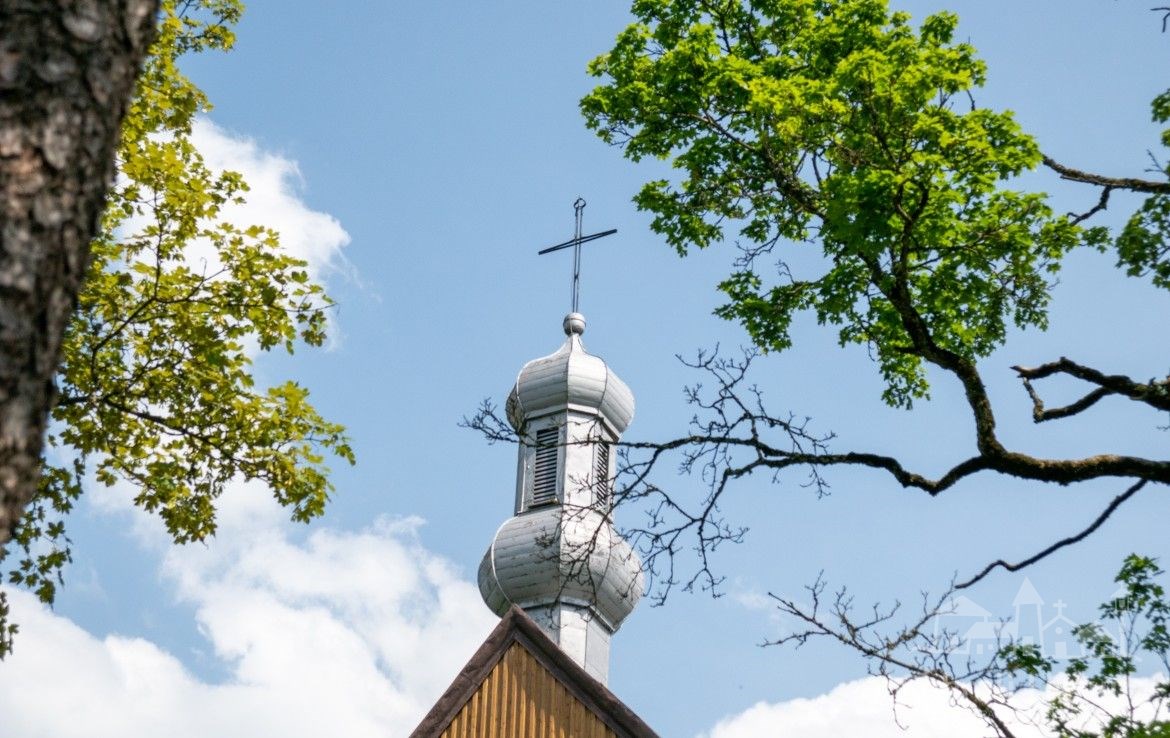